The Lakers won’t be waiting this season.

Spring Lake fell behind early, then exploded for 35 unanswered second-half points and stunned visiting Orchard View 42-19 in a non-conference season opener on Thursday.

“It feels really good,” said Lakers coach Dan Start. “Not so much for me, but for the kids, the student section and the crowd. It’s good to get that win and we hope we keep it going.”

Securing the win was anything but a given early on, when Orchard View marched 63 yards on the opening drive of the game, and facing a fourth-and-14, turned to its bag of tricks. 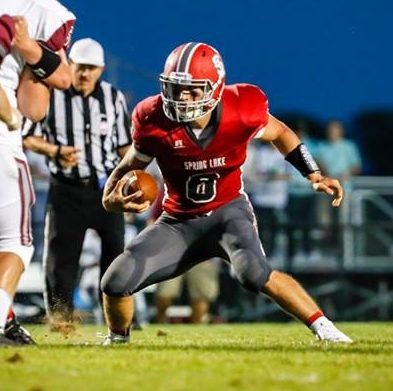 Cardinals quarterback Owen Swanson pitched to running back Edmari Mitchell, who passed to Michael Grinnell for a 31-yard touchdown and a 6-0 lead.

Spring Lake had no response, going three-and-out and setting OV up at midfield after a short punt.

The Cardinals took advantage, going 47 yards on nine plays and taking a 13-0 lead on Mitchell’s five yard TD run with 1:21 left in the first quarter.

Orchard View looked to add another score early in the second quarter, but Swanson was stopped short on a fourth-and-one at the Laker 26-yard line.

The Lakers moved 74 yards on 12 plays, and cut the Cardinals lead to 13-7 on quarterback Caleb Montgomery’s 2-yard TD run with 3:30 left in the half.

But Spring Lake left too much time on the clock, and OV took advantage, driving 61 yards to the Lakers’ six.

Facing a fourth-and-goal with four seconds left in the half, Swanson scrambled loose from the Lakers pressure and hit Dayton Rose for a six-yard TD pass. That gave the Cardinals a seemingly comfortable 19-7 halftime lead.

“We came out a little sluggish,” Start said. “We did some good things in the first half, we just didn’t finish. It was a little nerve-wracking at the half.”

Whatever nerves the Lakers had at halftime seemed to be gone by the start of the third quarter. 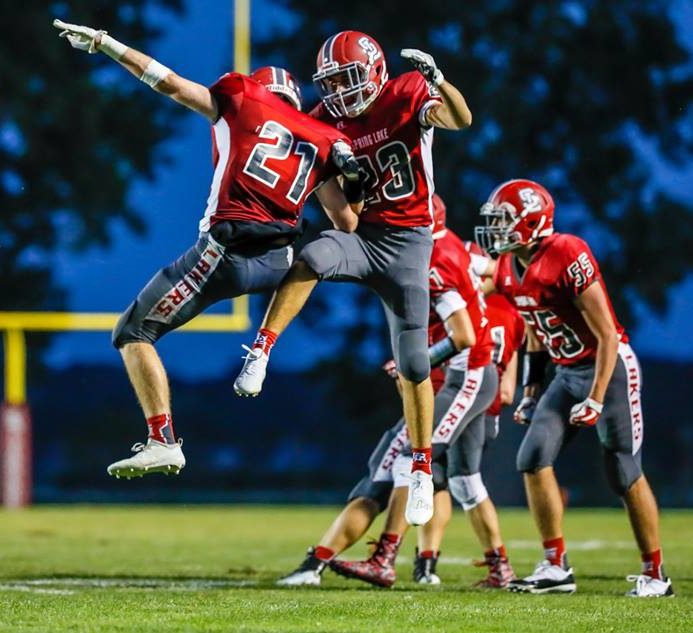 Spring Lake’s No. 21 What Lisman and No. 23 Kyle Garrison celebrate after the touchdown. Photo/Tim Reilly

On the second play of the second half, Montgomery found Mitch Payne on a 56-yard pass to the Cardinals’ seven-yard line. Three plays later, Montgomery hit Noah Verlinde with a nine-yard TD strike to cut the OV lead to 19-14 with 10 minutes left in the quarter.

The Lakers’ next possession ended with Montgomery’s 2-yard TD dive with 5:14 left in the third, giving his team a 21-19 lead.

Orchard View, which held the ball for most of the first half, ran only eight plays for 12 yards in the third quarter.

“We came out in the second half and had two penalties on our first two drives,” OV coach Joe Tanis said. “Then we weren’t able to slow them down. They did a good job with their adjustments at halftime and their quarterback is really good.”

Montgomery, who finished the game with 158 rushing yards and 99 through the air, put the Lakers up 28-19 three minutes into the fourth quarter with a 3-yard TD run.

A penalty on the ensuing kickoff put Orchard View back at its own 2-yard line. Looking for a spark, the Cardinals went for it on 4th-and-1 at its own 11 with 9:22 left in the game. Unlike earlier in the contest, they came up short.

The Lakers got the ball with great field position, and Montgomery scored from three yards out three plays later, giving Spring Lake a 35-19 lead.

Backup quarterback Zachary Keyser scored on a five-yard run with 1:11 left in the game for Spring Lake’s final score.

“The second half we did the same thing we were doing in the first half, but we were able to finish,” Start said. “We got on a roll a little bit and you could see, Orchard View was like us the past two years, low on numbers with a lot of kids that play both ways, and we were able to wear them down.”

The Lakers finished with 323 total yards, including 44 carries for 224 yards. 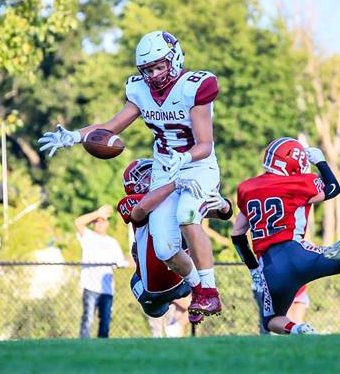 Dayton Rose gets tied up on the pass by Spring Lake’s No. 44 Steve Ready and No. 22 Gavin Alban. Photo/Tim Reilly 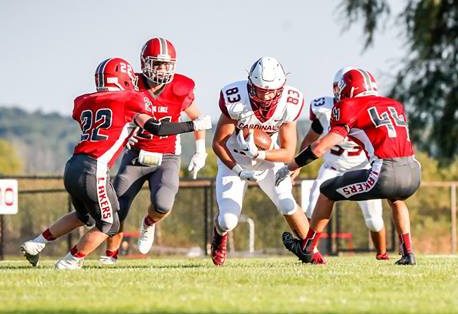 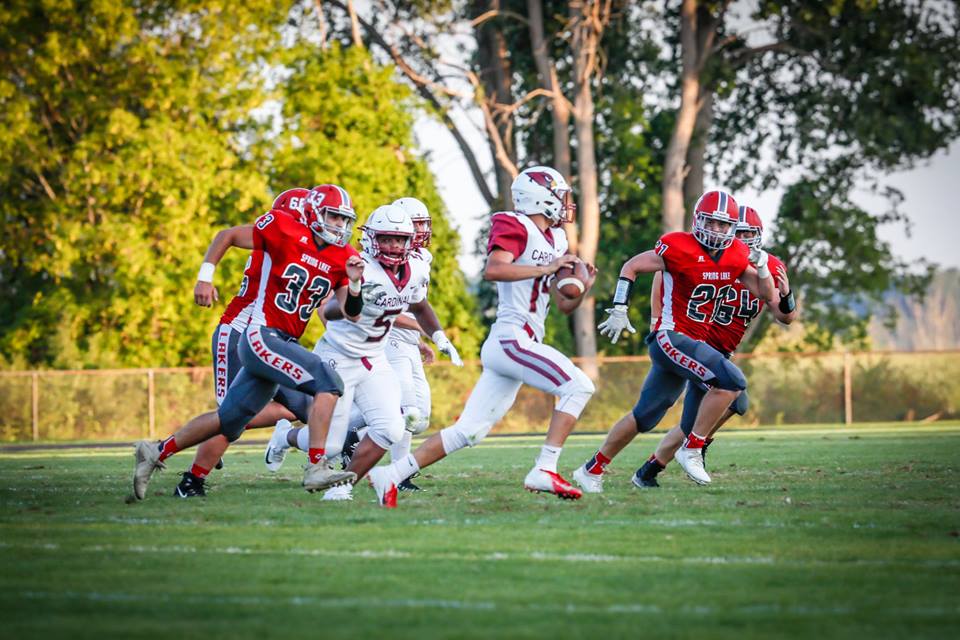 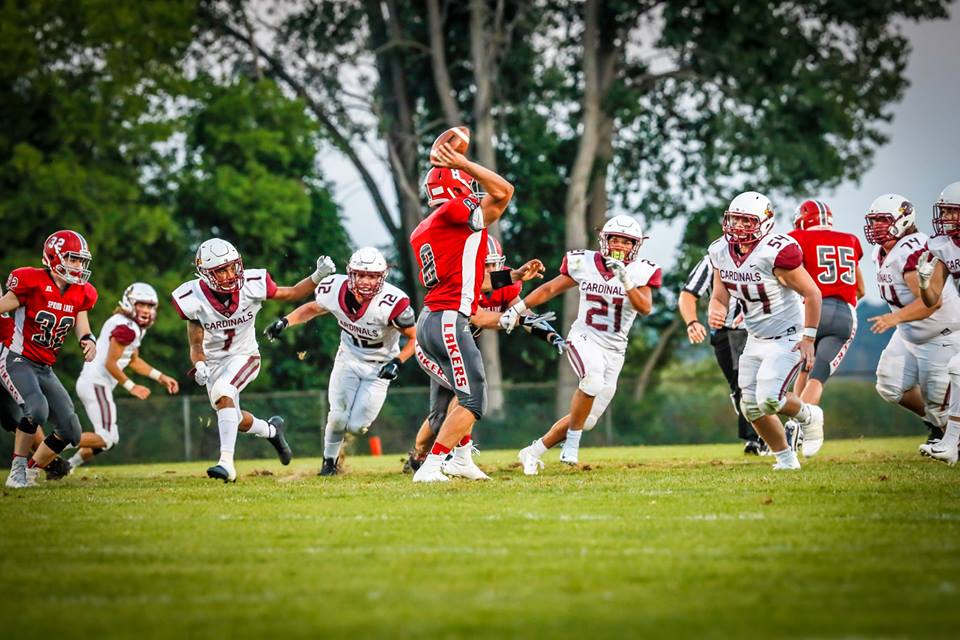 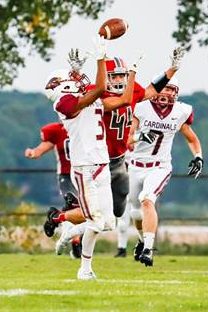 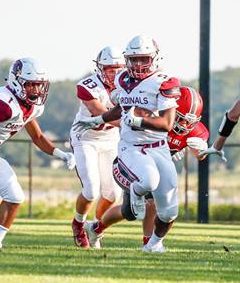 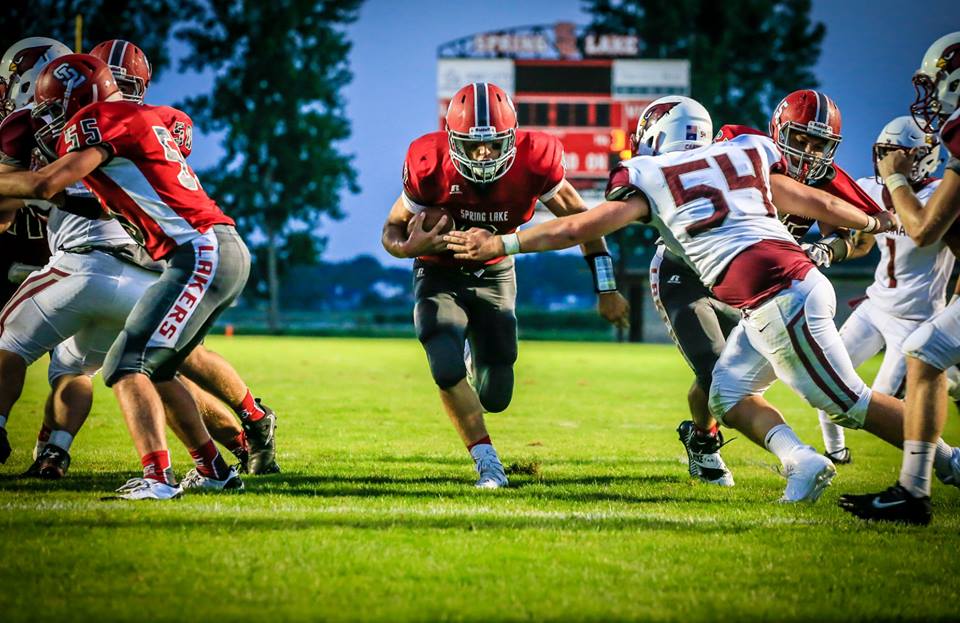 Spring Lake QB Caleb Montgomery gets ready to break through the hole for a touchdown as OV’s No. 54 Jordan Tuttle tries to get in his way. Photo/Tim Reilly