RAVENNA – At this point of the season, the playoff pretenders and contenders are beginning to separate themselves.

But at Oakridge, the Eagles are starting to see themselves at another level  – as state championship challengers.

They showed why on Friday night at Citizen’s Field at Ravenna High School, dismantling the Bulldogs on both sides of the ball in a 48-12 blowout victory.

The Eagles ran their perfect record to 5-0 overall and remained tied atop the West Michigan Conference standings with Montague at 4-0. Ravenna dropped to 3-2 overall and 3-1 in the WMC.

Oakridge can clinch a playoff berth next Friday at Mason County Central, but the Eagles believe that will be just the first milestone in a long journey this season.

“(Making the playoffs) is a tradition here,” said defensive end Jaden Parker, who had a pair of sacks of Ravenna junior quarterback Conner Kilbourne. “But we’ve got bigger things in mind. Just making the playoffs, that’s one of our smaller goals. Our eyes are on a championship.” 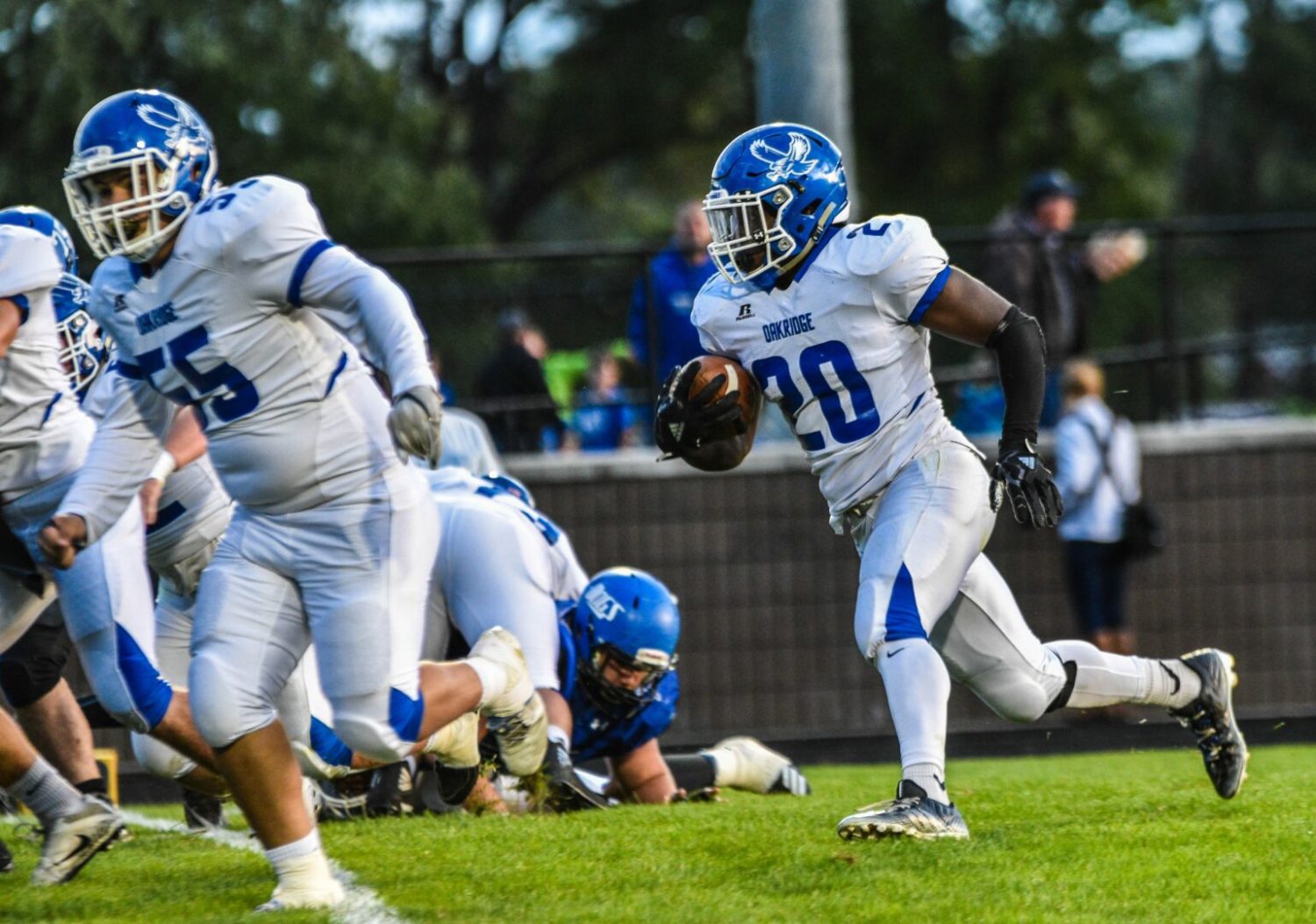 Leroy Quinn gets ready to explode from the Oakridge backfield as No. 55 Jaegar Hughes blocks at the line. Photo/Mitchell Dixon MSD Photography

If the Eagles continue to dominate at the line of scrimmage like they did against the Bulldogs, they’ll have a flying chance.

Oakridge limited Ravenna to just 49 rushing yards and 166 overall, while its high-scoring offense churned out 267 yards on the ground, a total that would have been higher if not for a running clock throughout the second half which limited its possessions.

“Especially with what they do and their different threats – the play action pass, the screens – to try to keep all that contained was a lot of work this week,” said Oakridge head coach Cary Harger about Ravenna, which has been scoring a lot this season. “Our scout team did a great job replicating that in practice this week, and with us seeing it throughout the summer, I thought our defense did really well, considering all their different options.”

Oakridge asserted itself early, while the Bulldogs routinely shot themselves in the foot.

The Eagles had a 14-0 lead after one quarter, after outrushing the Bulldogs 82-4. Ravenna botched a punt for a loss of 12 yards and was stuffed by Oakridge linebacker Blake Masterman on a fourth-down run on its two possessions in the quarter.

It didn’t get much better for the Bulldogs after that. 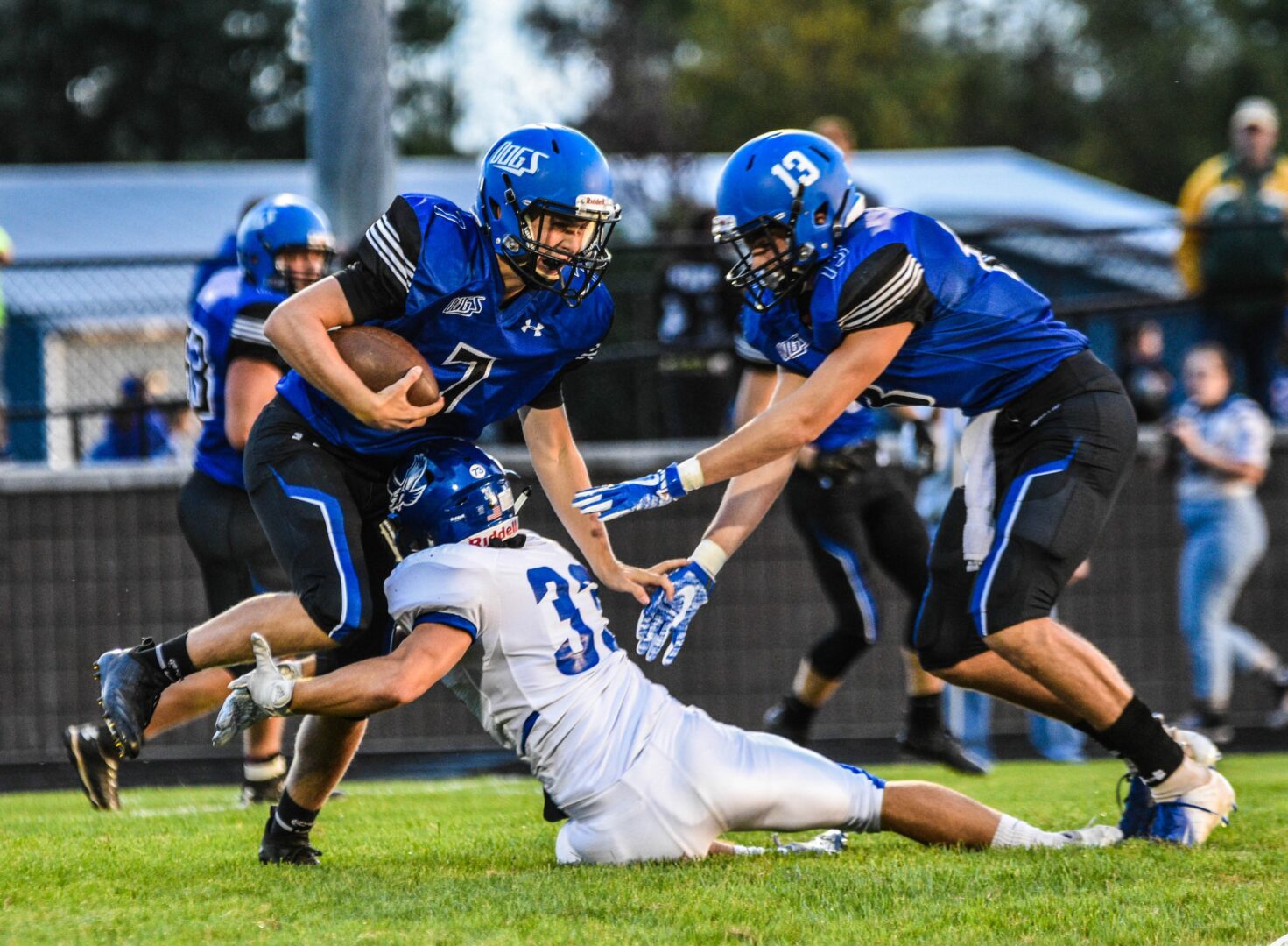 Ravenna turned the ball over three times in the second quarter – all on fumbles – and the Eagles soared to a 41-0 advantage. Offensively, Oakridge spread out the wealth, with Leroy Quinn scoring on a 21-yard run; Jaxon Fri returning a punt 60 yards for a score; quarterback Koleman Wall lofting a perfect over-the-shoulder pass to Adam Meyers for a 33-yard touchdown; and Masterman blazing 31 yards to the end zone.

“There’s a lot of pride in those guys to want to dominate up front,” Harger said. “Our line coach, Tom VanHeest, has done a great job working with those guys. The communication between those guys, it’s like the know what each other is going to do almost instantly.”

Ravenna scored on its opening drive of the second half, thanks to a 84-yard kickoff return by Brandon Millis. Garry Johnson scored three players later on a 6-yard run off tackle.

But Oakridge’s first-team offense turned in one more impressive drive, with Wall scoring on a 10-yard keeper with 5:25 left in the third quarter, his second score of the contest.

Quinn led the Eagles’ ground attack with 129 yards on 19 carries.

Kilbourne, who was sacked four times, completed 12-of-17 passes for 117 yards. 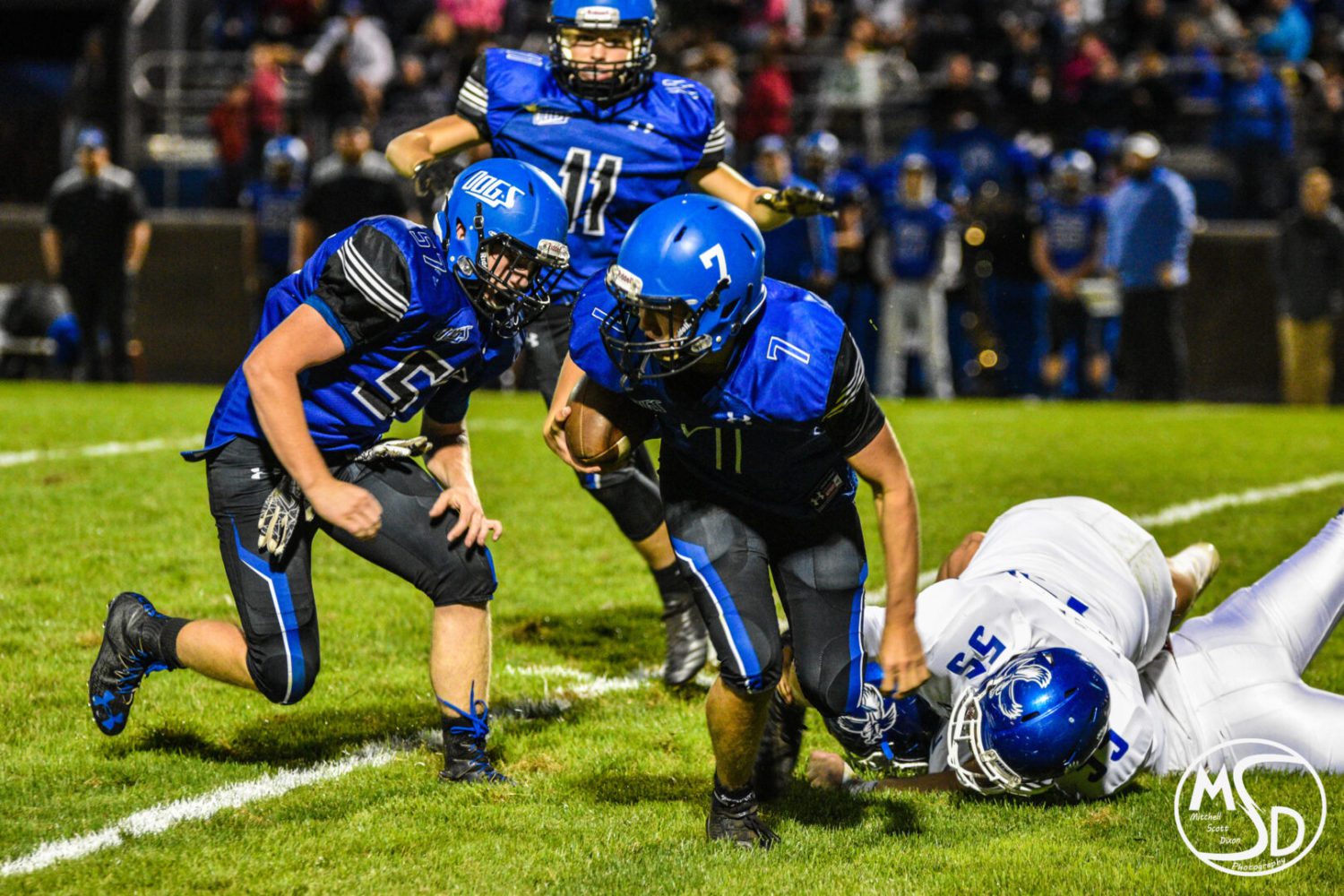 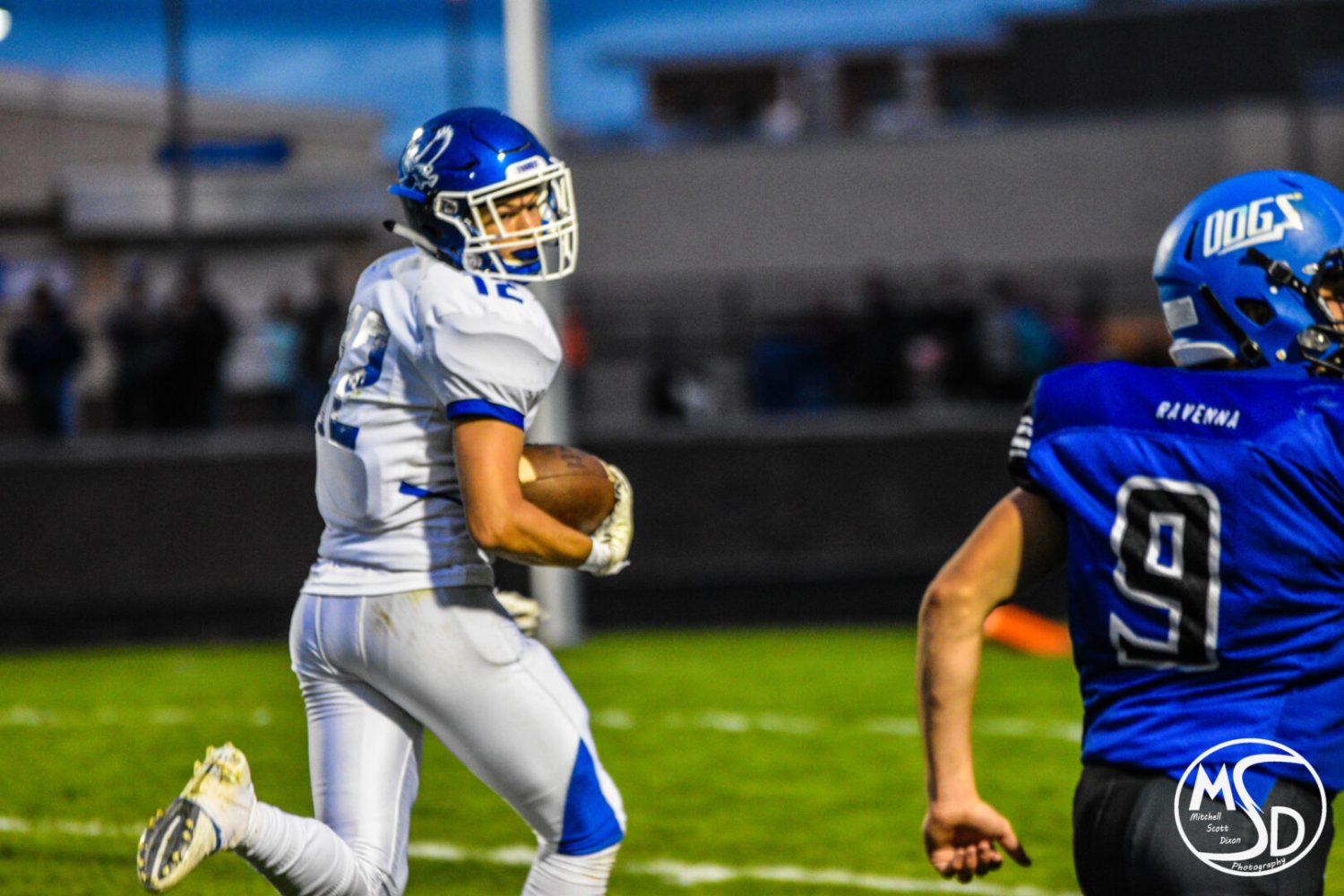 Jaxon Fri looks behind on the run for Oakridge. Photo/Mitchell Dixon MSD Photography