EGELSTON TOWNSHIP – Coaches typically tell their squads to play for the school listed on the front of their jerseys.

On Friday, during Military Appreciation Night at Oakridge High School, it was equally important to play for the

name on the back.

The Eagles not only honored veterans of all branches of the military with special uniforms, but also got the job done on the field, totaling 321 rushing yards in a grind-it-out 42-14 victory over West Michigan Conference rival Whitehall.

The victory keeps the Eagles undefeated this season at 4-0 overall and 3-0 in league play, and avenges a loss to the Vikings last season.

Whitehall suffered its first loss of the season and falls to 3-1 and 2-1.

“It feels awesome,” said Eagles’ running back/linebacker Blake Masterman, who scored three touchdowns in the first half. “It was big to come back and get some revenge on these guys, and having a chance to honor a lot of people who served in the military.” 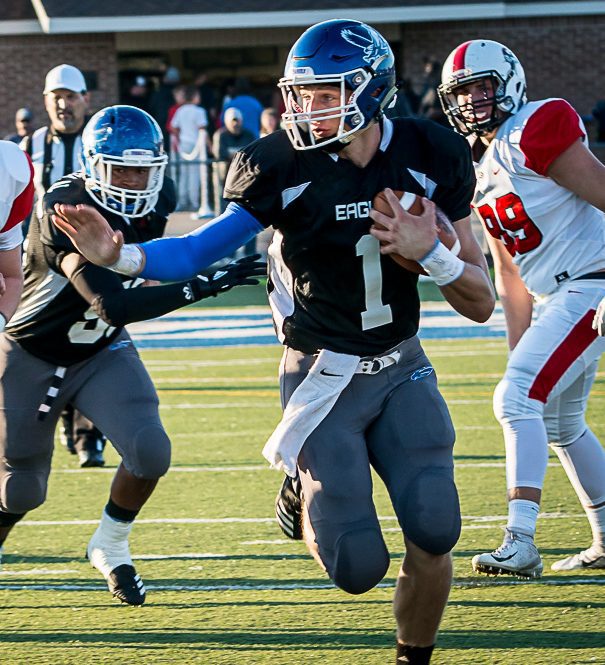 Koleman Wall raises the stiff arm on the rush for Oakridge. Photo/Kris Rake

Oakridge coach Cary Harger said a key to the victory was the resiliency his defense showed during important stretches of the first half.

The Eagles had some center exchange issues and lost an interception to Whitehall, giving the Vikings a pair of opportunities in Oakridge territory.

But the Eagles’ defense limited the damage, allowing the offense to soar in the second quarter.

While the Vikings keyed heavily on stopping Oakridge standout running back Leroy Quinn, other Eagles stepped up offensively, including Masterman.

With Oakridge already up 7-0 after a short Quinn touchdown run on the opening drive, Masterman put the Vikings in a bigger hole with 3:51 left in the first quarter.

His forward progress appeared to be halted at the line of scrimmage, but the senior kept his legs moving and somehow escaped, then sprinted 70 yards to the end zone.

Whitehall scored its lone points of the first half following an Oakridge turnover early in the second quarter. The Vikings recovered a fumbled snap, then quarterback Gavin Schaeffer scored on a 20-yard keeper and cut the deficit to 14-6.

But that was the closest Whitehall got to the Eagles.

Oakridge answered right back with a long scoring drive, capped by Masterman’s 2-yard touchdown plunge. The Eagles then snuffed out a fake punt attempt on Whitehall’s next series, and got great field position with 4:50 left in the half. 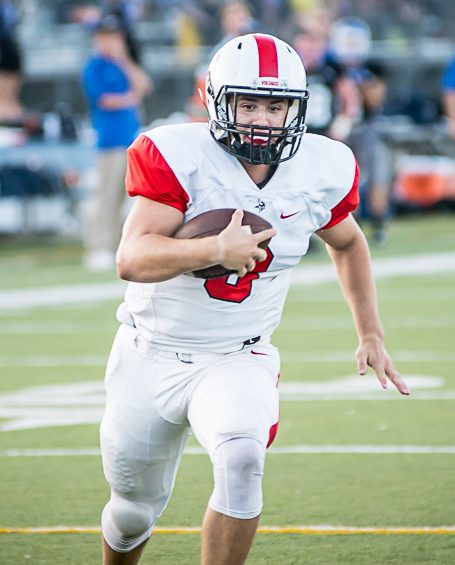 Again Masterman answered the call, hauling in a 12-yard touchdown pass from quarterback Koleman Wall with just 22 seconds remaining to give the Eagles a 28-6 lead.

“We’ve been waiting for Blake to have a game like this, and it’s not like we didn’t expect it to happen,” Harger said about Masterman. “We knew it was coming, especially with the attention that Leroy has been getting.

“With the different sets and personnel changes we can make, it’s just more weapons in the arsenal,” the coach added. “Opponents have a hard time just focusing on one player or one set.”

Whitehall fought back at the start of the second half, getting a great kick return by Terrell Harris and then scoring on a 32-yard touchdown run by junior Kayleb Venema, making it 28-14.

But Oakridge put the game away with 8:54 to play in the fourth, when the Eagles caught the Vikings off guard with an outside run by senior Jalen Hughes, which resulted in 36-yard touchdown.

Oakridge outgained Whitehall 431-124.  Quinn, who only had 39 yards at the half, finished with 135 yards on 29 carries. Masterman had 93 yards rushing, 44 receiving and a team-leading six solo tackles.

Kyle Honoree had an interception and finished with 14 tackles for Whitehall. Venema paced the ground game with 57 yards on 10 carries.