EGELSTON TOWNSHIP – The Oakridge boys soccer team was looking for

a big win Tuesday against perennial power North Muskegon, to send a message to the rest of the West Michigan Conference.

Instead, the host Eagles had to settle for a 1-1 tie with the Norse. The teams remain tied atop of the WMC standings with identical 3-0-2 league records. Overall the Eagles are 5-0-3 while the Norse are 9-3-3.

It wasn’t a win for Oakridge, but it could have been worse.

Tied at 1-all, the Norse were awarded a penalty shot with 8:15 left in the game, and Trevor Schultz lined up to take the kick.

Schultz fired a shot to the bottom left corner of the net, but Eagles goalie Jason Cerka dove to his right and knocked the ball away.

“(Jason) made a ridiculous play on that penalty kick, just phenomenal,” Oakridge coach Greg Fleener said. “They way these teams both played, it’s kind of fitting it ended this way.”

Both teams scored in the first half, with Oakridge taking a 1-0 lead at the 23:29 mark when Bryce Kartes headed a ball forward to Christoffer Simonsen, who outraced the defense and beat NM goalie Jake Hoffer on the short-side.

The Norse, who outshot the Eagles 5-4 in the half, couldn’t find the net until Brody Hoffman took a pass from Brendan Gannon and fired a long shot into the top of the net with 1:32 left in the half, to even things at 1-1.

“They’re a good team and they controlled the first half,” Norse coach Jeremy Tjapkes said. “We made the adjustments for the second half, but they showed us the weaknesses we have.”

The Eagles had some early scoring chances in the second half. Devin Smith had a shot go wide of the net at the 29:45 mark, and Simonsen took an inbounds pass and fired a shot just over the Norse goal four minutes later.

Oakridge finished the second half with a 7-3 shot advantage and had an 11-8 edge in the game.

“I think this team is capable of playing better,” Fleener said. “But the reality is North Muskegon is a power in this conference and we just tied them. It’s a positive for Oakridge boys soccer.”

Hoffer finished with 10 saves for NM, while Cerka had three saves and Brandon Jones, who started the game and played the first half, stopped four shots for Oakridge. 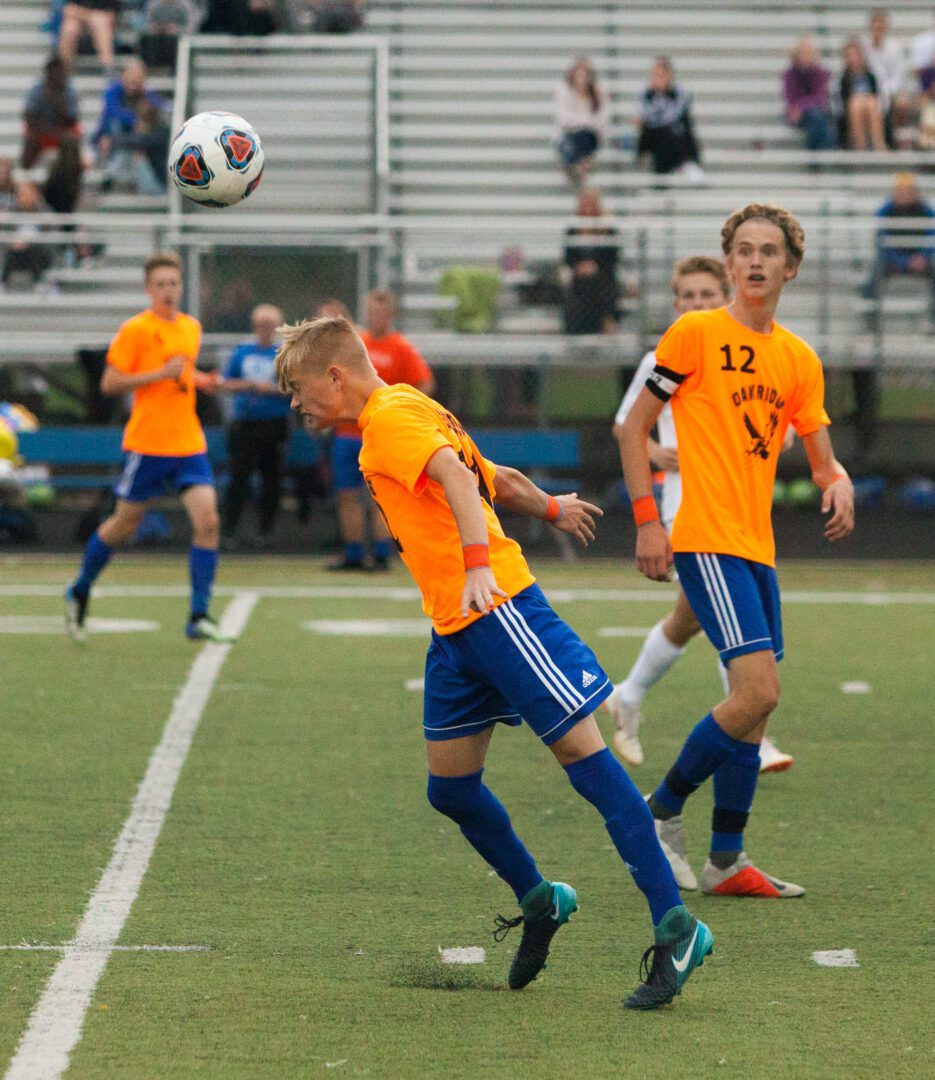 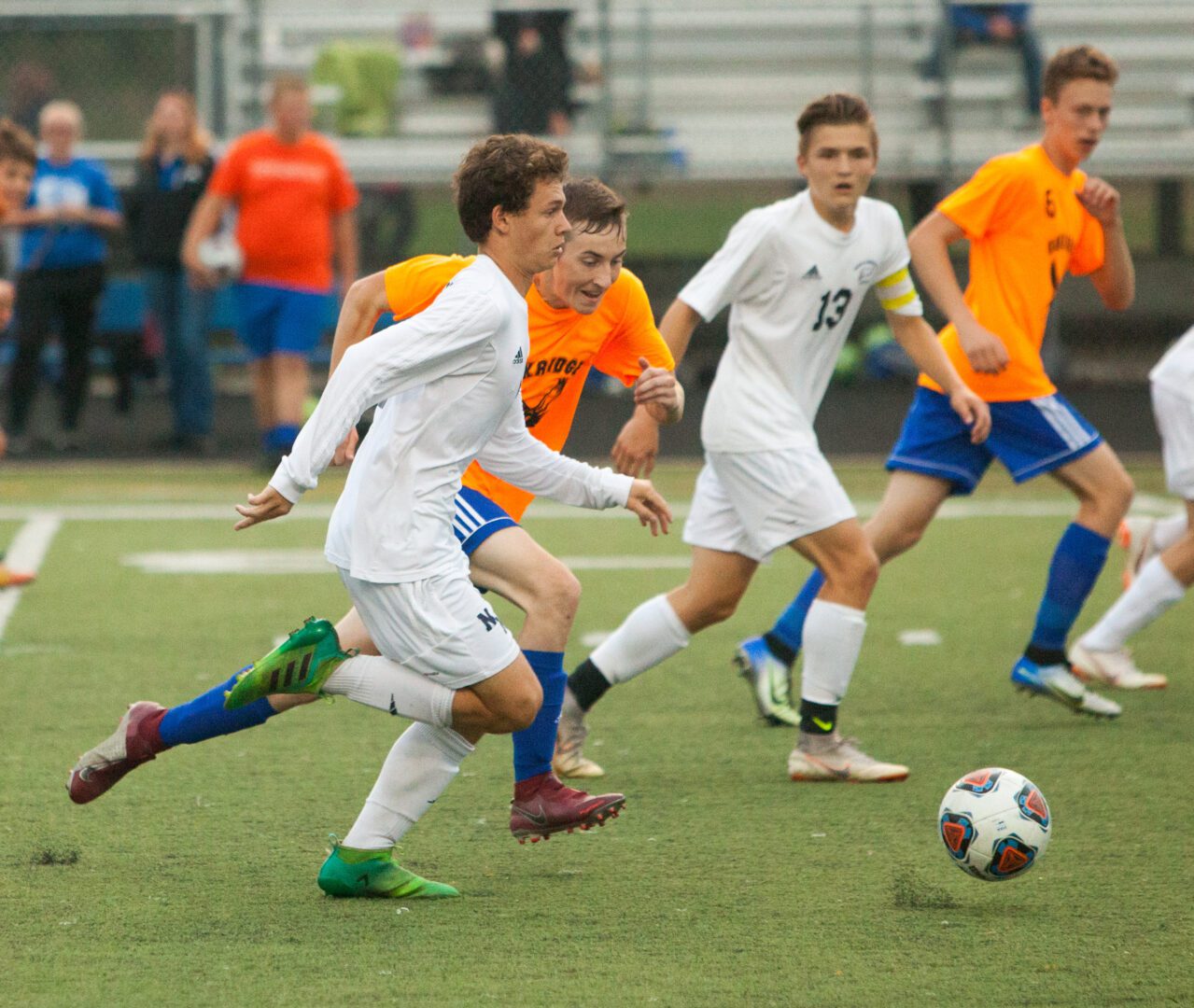 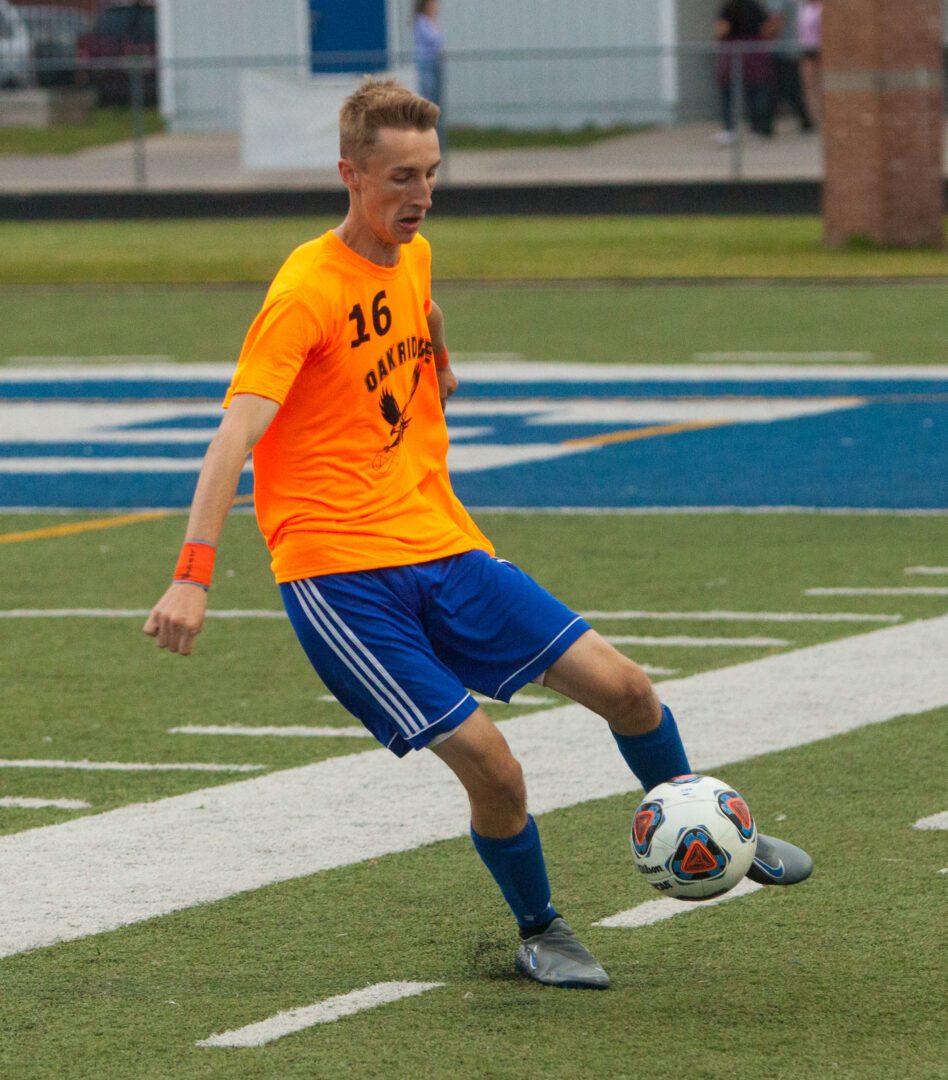 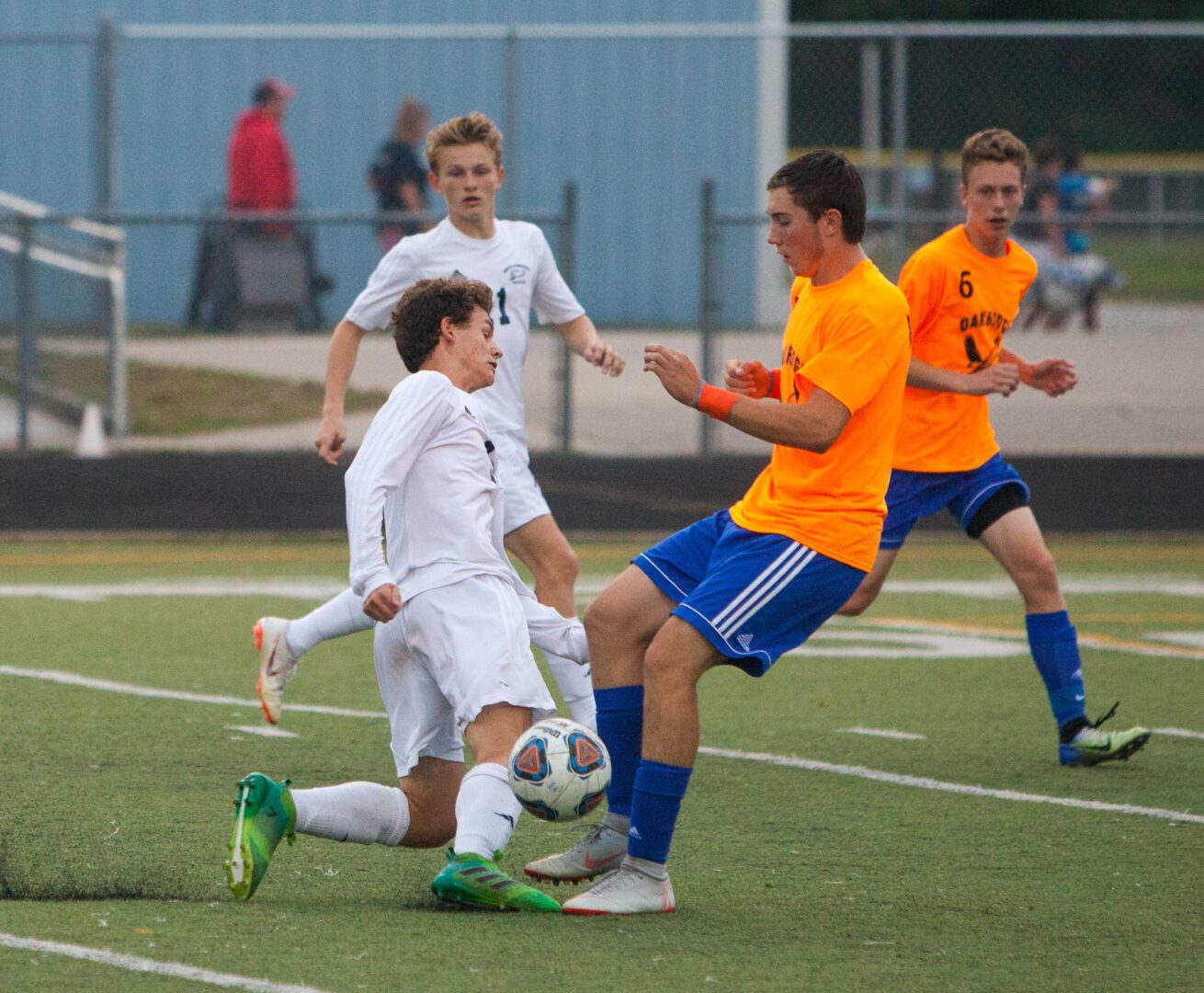 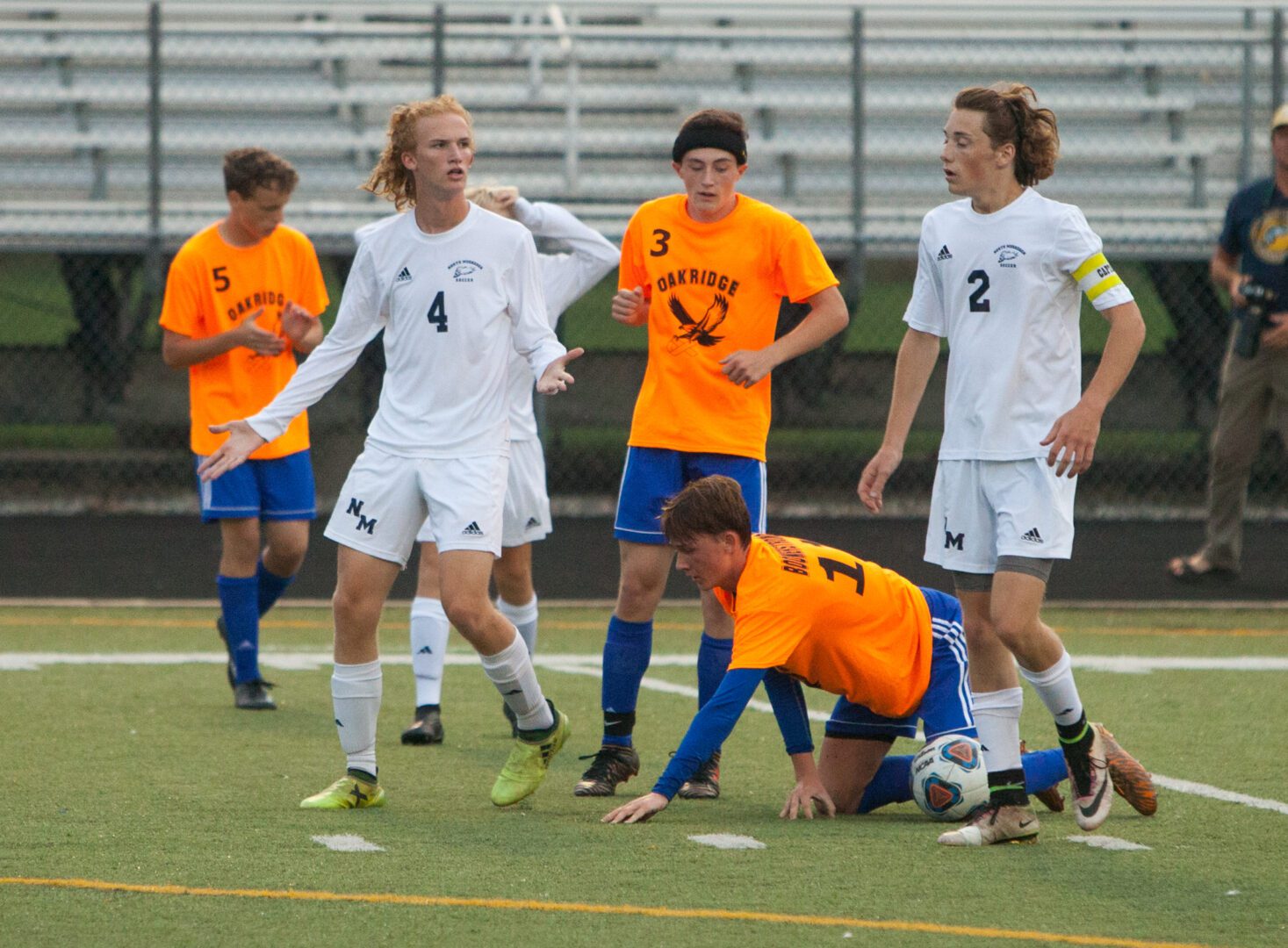 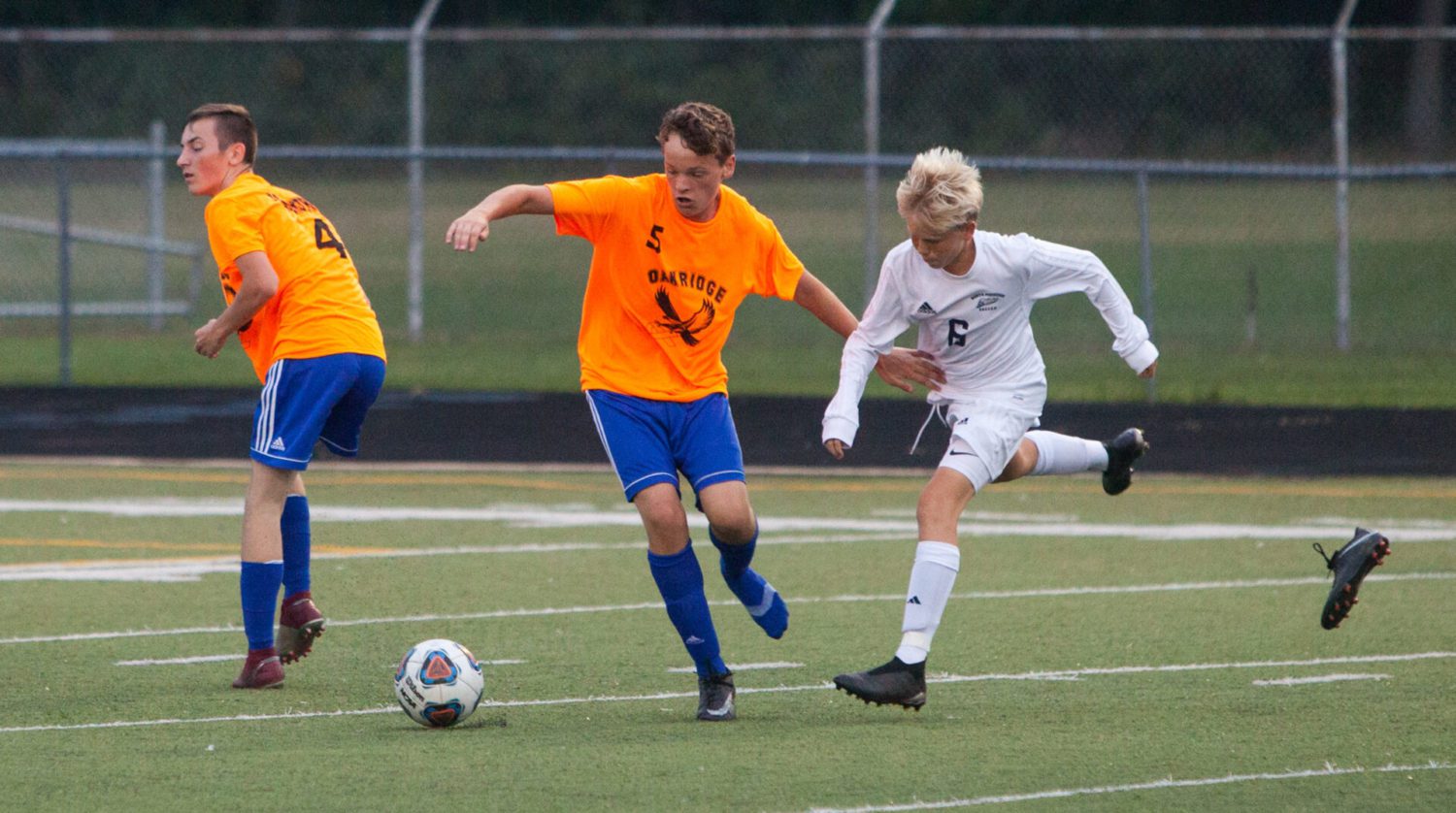 Oakridge’s No. 5 Ben Cooper loses his shoe fighting for the ball against No. 6 Hunter Koekkoek. Photo/Jason Goorman 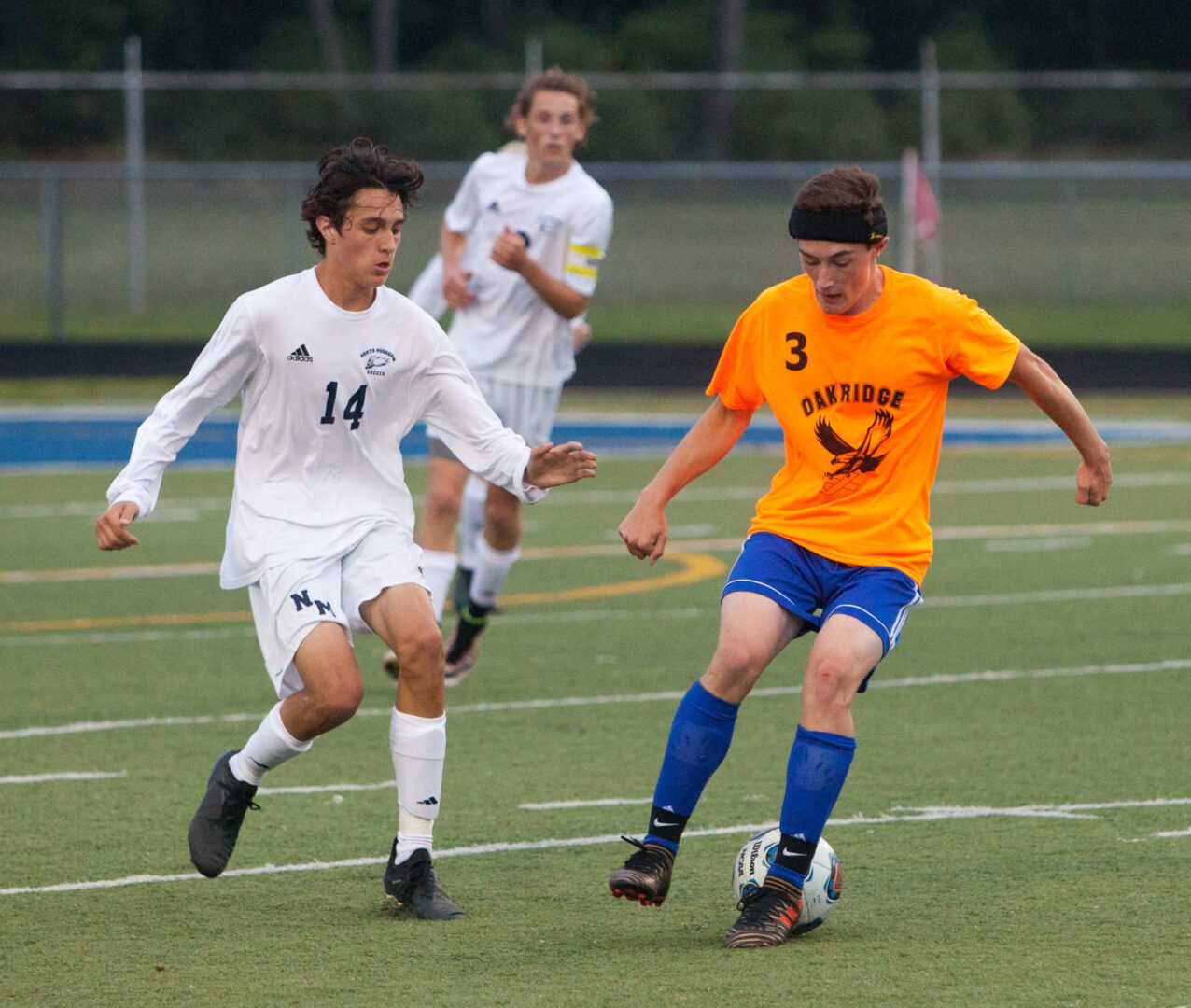 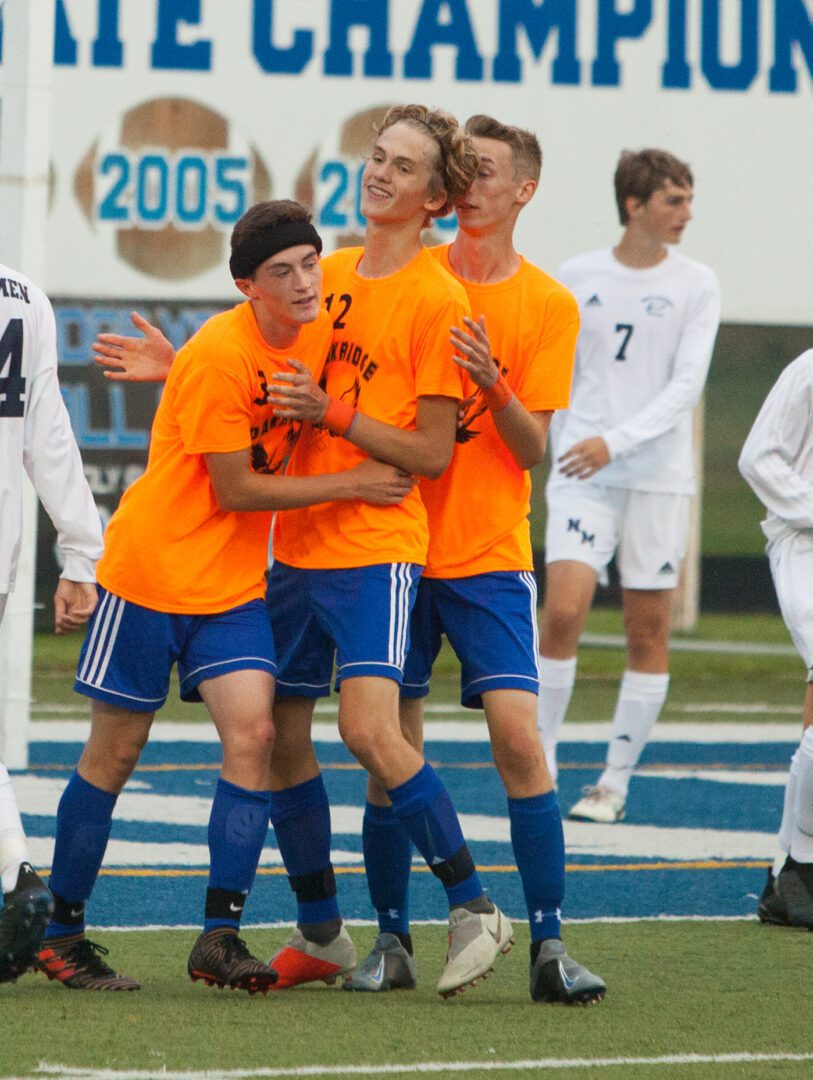 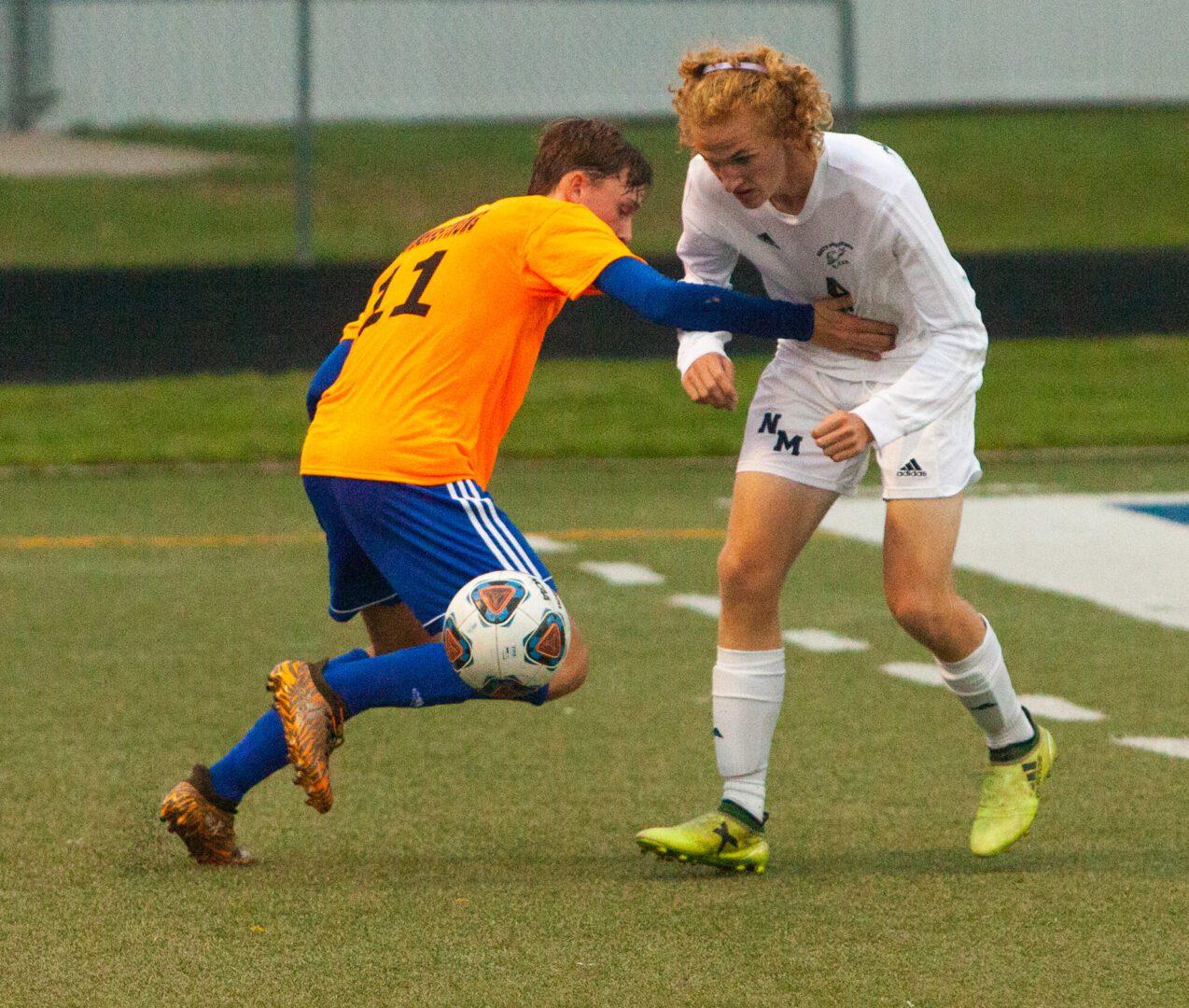 Christoffer Simonsen tires to get around North Muskegon’s No. 4 Jack Vanderwoude. Photo/Jason Goorman 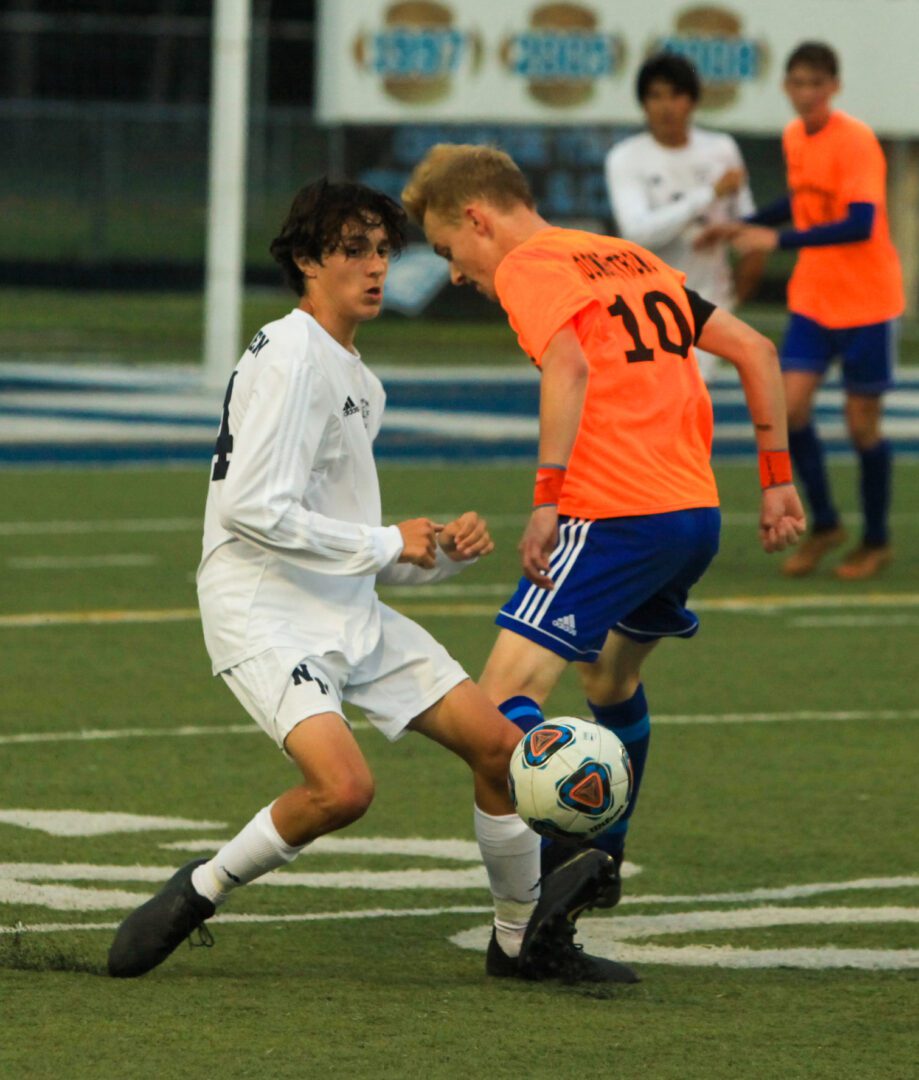 North Muskegon’s Hudson Richards gets in the way of Oakridge’s No. 10 Hunter Behnke. Photo/Jason Goorman