MUSKEGON – There will be tough competitors in the upcoming Division 3 playoffs, but right now, the biggest

challenge Muskegon Coach Shane Fairfield might have is keeping his Big Reds humble.

After piling up 660 yards of total offense and scoring 55 points against previously unbeaten archrival Mona Shores on Friday, Muskegon has to be feeling indestructible.

Behind an absurd stat line from junior quarterback Cameron Martinez – 352 rushing yards and six touchdowns – the Big Reds made a resounding statement at Hackley Stadium.

Their 55-35 victory over Mona Shores not only ran the Big Reds’ record to 8-0 this season, but extended their winning streak to 22 games in a row. They also clinched at least a share of the O-K Black Conference championship. 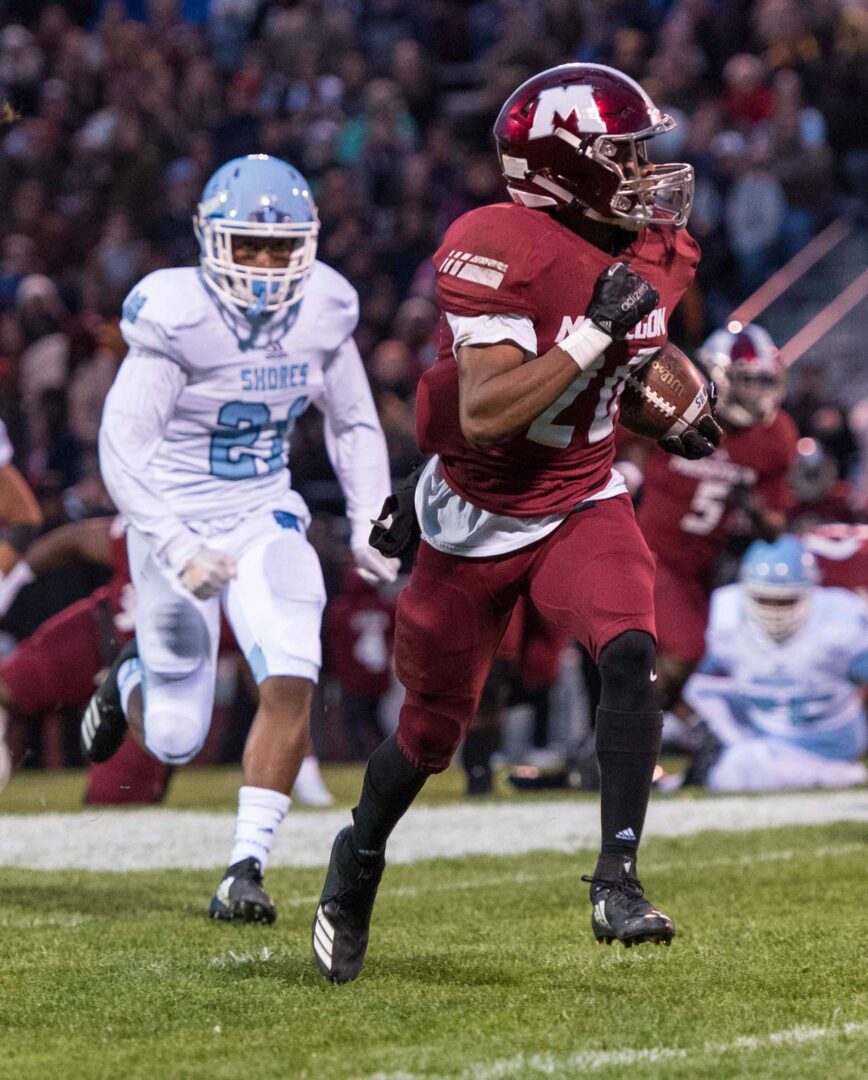 Muskegon’s Demario Robinson breaks into the secondary for a big gain. Photo/Eric Sturr

“In the playoff era, I believe we’ve tied (former Muskegon coach) Tony Annese for longest win streak here,” Fairfield said. “Tony Annese is my mentor, my role model, so I’m excited to get a chance to try to fill his shoes and live up to his legacy.”

Like Annese, who is now the head coach at Ferris State University, Fairfield is a perfectionist, so he found a fault in the Big Reds’ stunning offensive display – they failed to complete a pass on four attempts.

“I’m still upset about that,” he said. “We have to work more on that at practice. But with an O-line like that, I like our chances going forward.”

It looked like the combination of an offensive line that averages 300 pounds, and Martinez’ blazing speed and elusiveness, would be too much for the Sailors early.

Muskegon raced out to a 28-7 lead after one quarter. Martinez scored on a three-yard keeper on the Big Reds’ opening series, then ripped loose for a 78-yard sprint, followed by a 70-yard burst to the end zone by senior slotback Hyrosha Wilson.

Muskegon blocked a Sailors’ punt with under a minute left in the first, then scored one play later on an eight-yard keeper by Martinez.

After one quarter, Muskegon had 222 yards of offense on just seven plays. 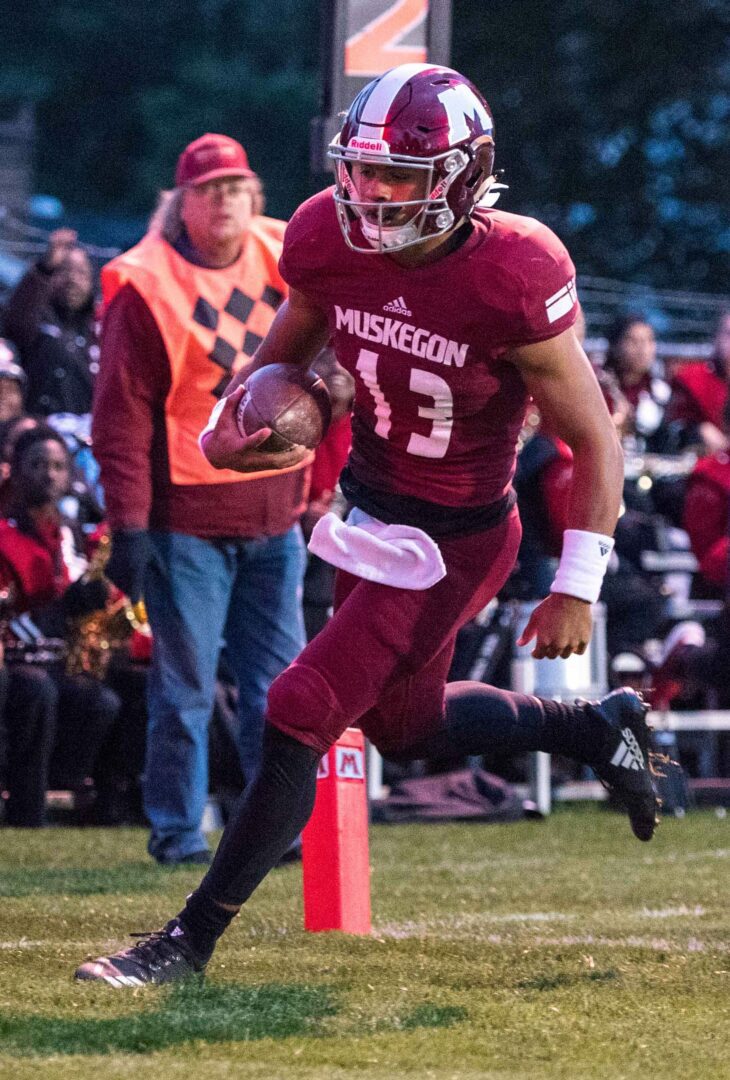 Mona Shores shook off the early power punches from Muskegon and fought back. The Sailors outscored Muskegon 14-0 in the second quarter to close the gap to 28-21 at the half.

Sailor junior quarterback Caden Broersma, who was stellar with 196 yards passing and 63 yards rushing, keyed the second-quarter surge. He completed a beautiful 28-yard touchdown pass to James Gilbert early in the second, and then the Sailors relied on a little razzle-dazzle to claw to within seven points.

Broersma handed off to Gilbert on a sweep with 3:45 left, but instead of breaking it up field, Gilbert pulled up and tossed a pass to a wide-open Andrew Swick for a 31-yard score.

Muskegon had a chance to add points right before the half, but a 29-yard field goal attempt missed badly.

“I think we let up a little bit (in the second) and were too relaxed,” Martinez said. “We knew we had to come out in the second half and execute.”

Both teams executed soundly in a back-and-forth third quarter. Martinez scored his fourth and fifth touchdowns of the contest, but the Sailors remained within striking distance on a pair of long scoring drives and short touchdown runs by Ke’Sean Sandifer and Broersma.

“I told Caden played lights out tonight,” said Mona Shores Coach Matt Koziak about his quarterback. “He played so grown up tonight. When plays broke down and the rush was coming heavy, he scrambled, kept his eyes up and made plays. He was a big-time QB tonight.”

But the banged-up Sailors, who only ran starting running back Sincere Dent four times because of a gimpy ankle, suffered another blow in the third when key defensive lineman Cole Stoudt exited with an foot injury.

That didn’t help in slowing the Big Reds, who closed out the game in the fourth with a two-yard leap over-the-top score by Jeremiah Lockhart, and a 44-yard touchdown sprint by Martinez with 1:58 left.

“He’s just lightning quick, he’s tough, and he’s patient letting his line open the holes,” Koziak said about Martinez. “If he gets into space, he’s just so elusive. We pride ourselves on being a good tackling team, but we didn’t do a good job of that tonight. He’s the big reason why.”

Gilbert finished with six catches for 118 yards for the Sailors, while the Big Reds’ running attack was bolstered by Lockhart’s 96 yards on five carries, and 122 yards on seven carries from Demario Robinson. 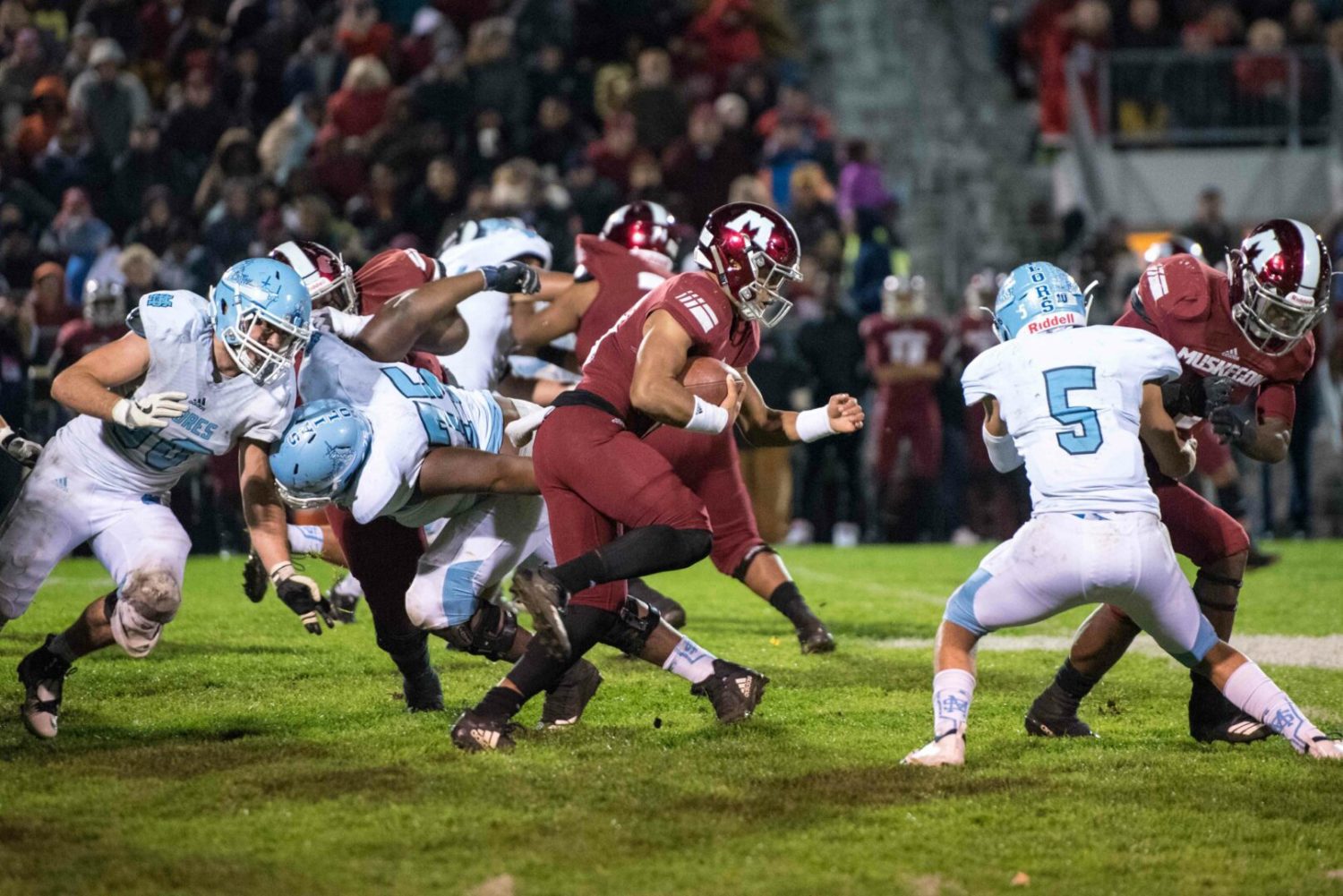 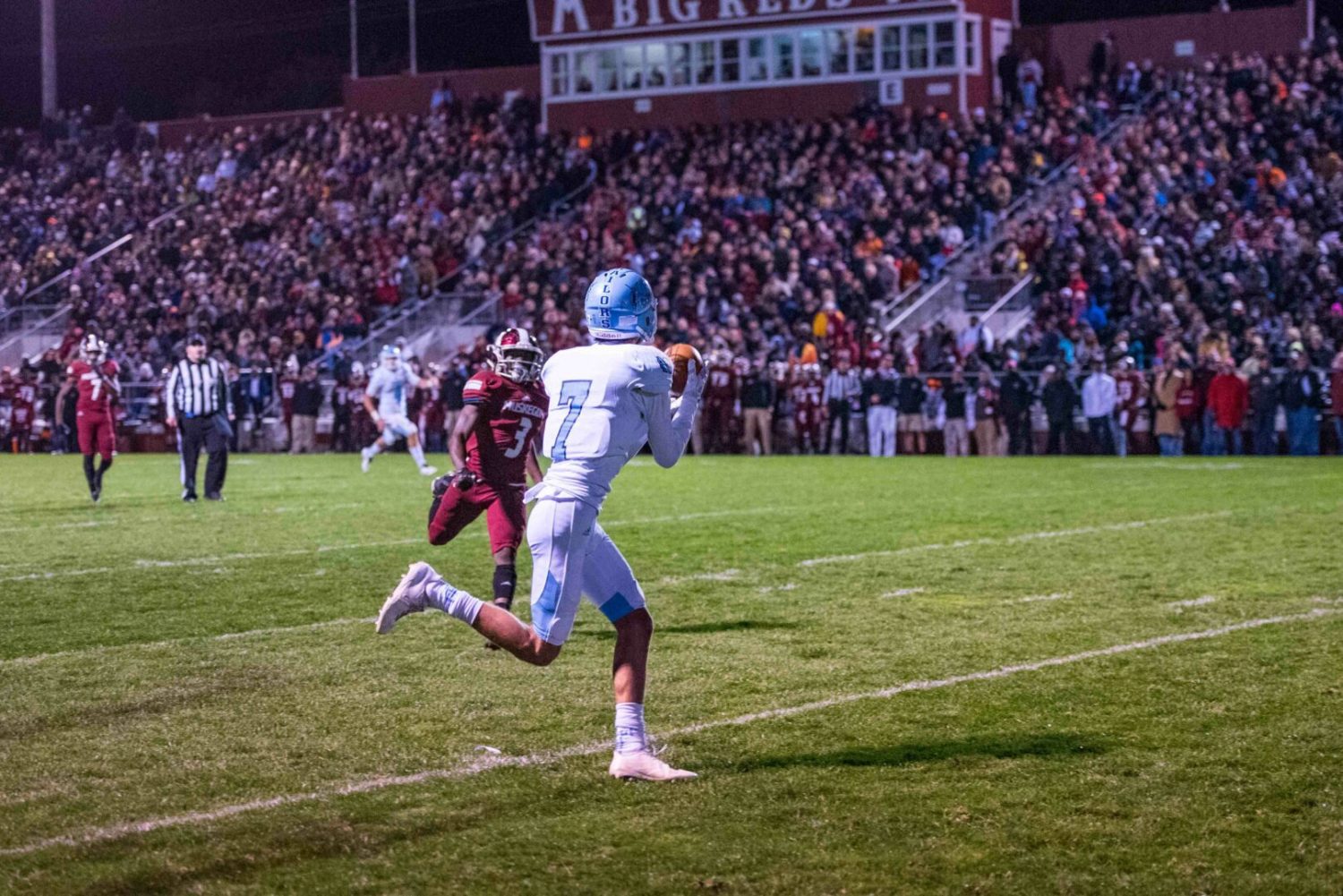 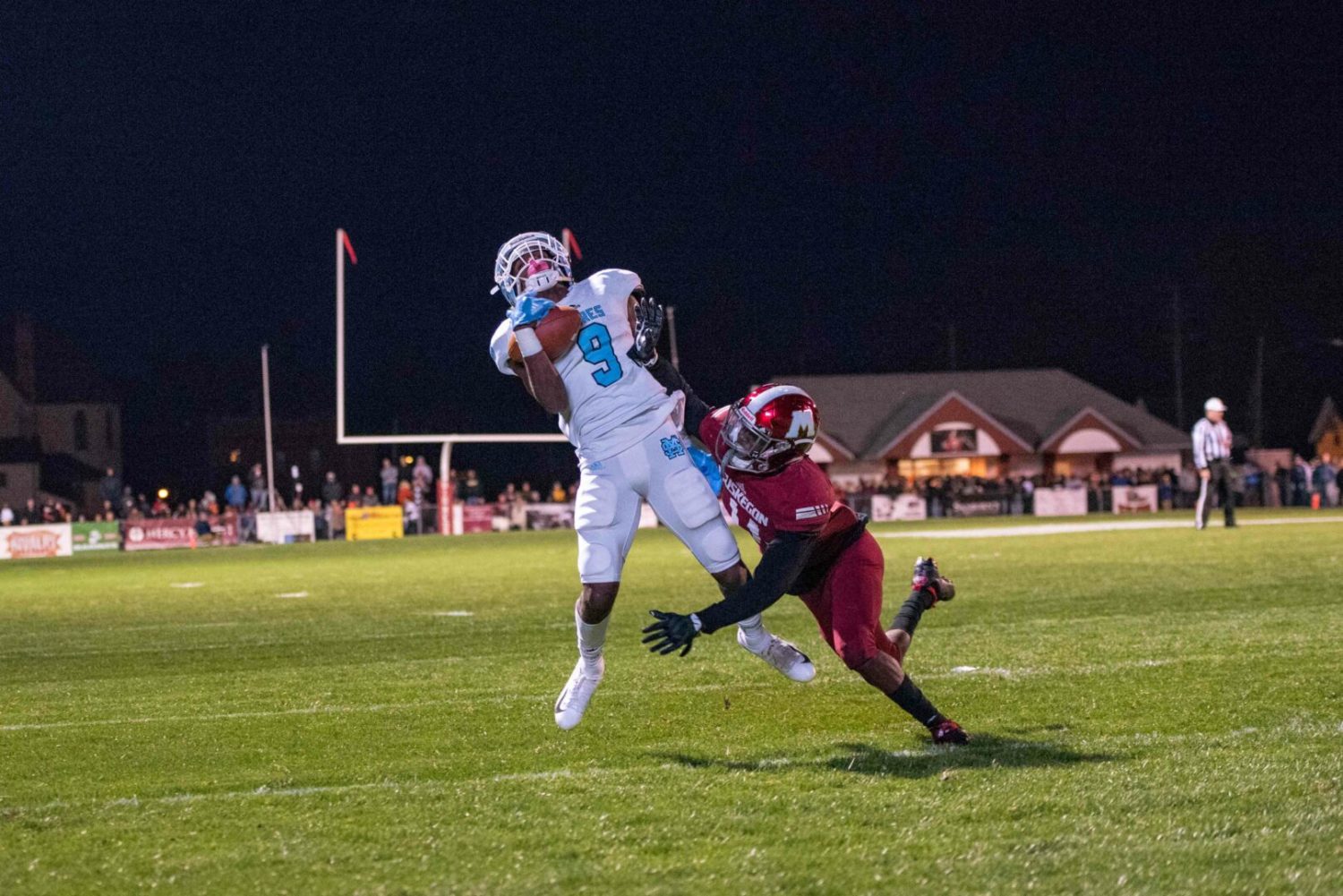 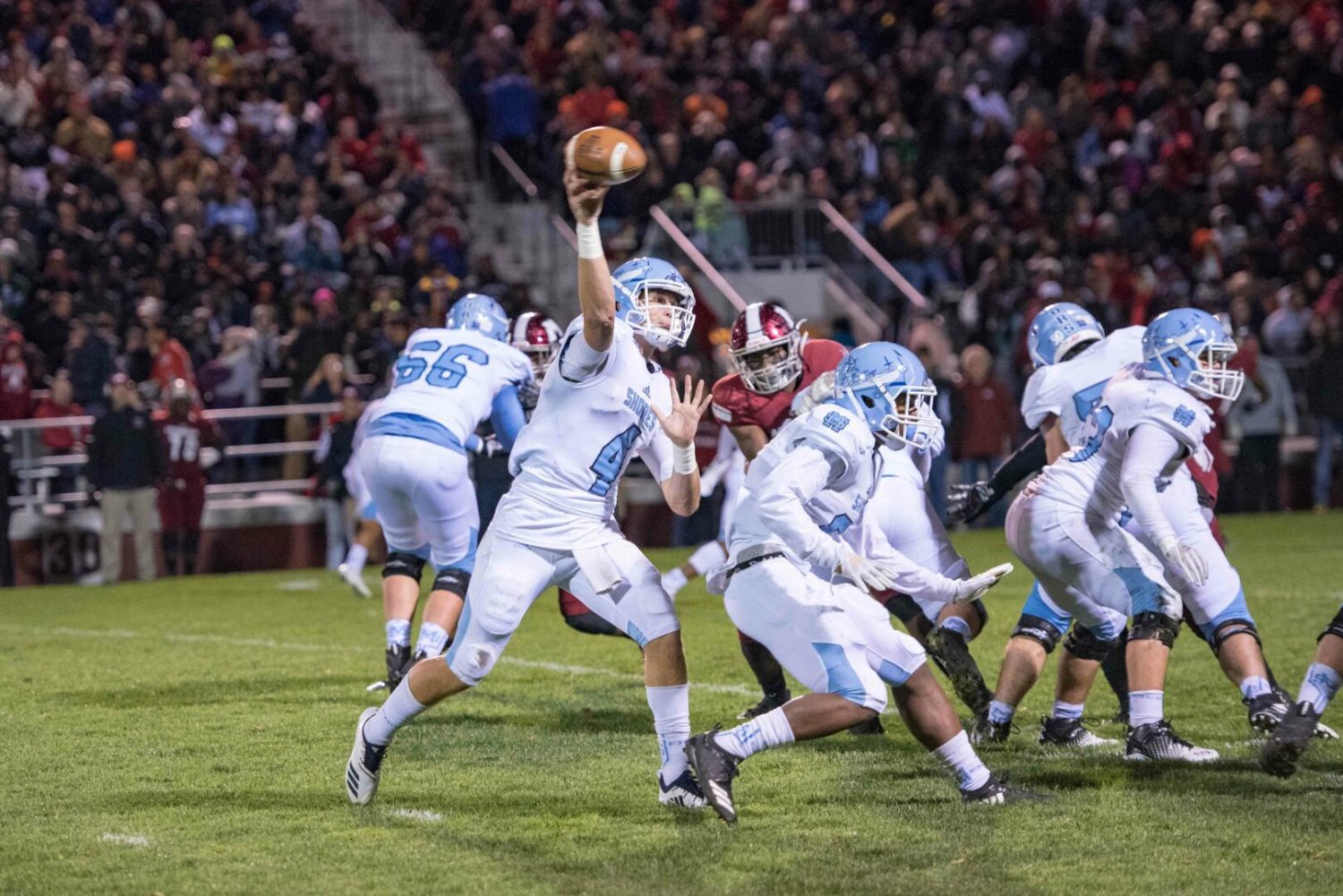 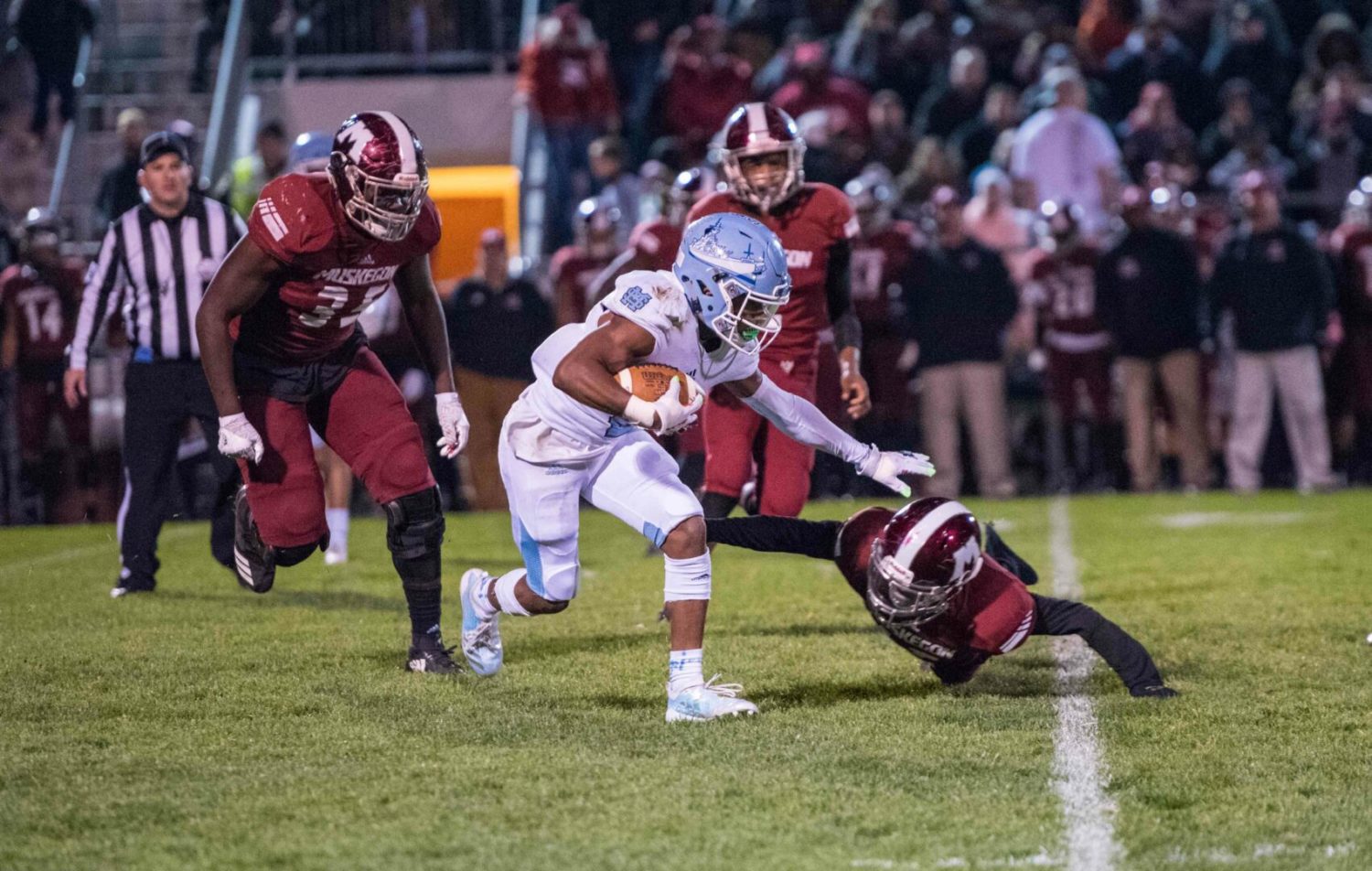