By Dave Tomczak
LocalSportsJournal.com
GRAND HAVEN – Despite controlling most of the action on Monday night, the Grand Haven boys soccer

team couldn’t find a way to put Mona Shores away.

Finally, after over 100 minutes of game time, Grand Haven found the edge, outscoring Mona Shores 3-2 in the shootout to earn a 1-0 victory in a Division 1 district tournament opener at Grand Haven High School.

“I told them that their opportunity will come,” Bucs coach Nick Tejchma said. “Just keep them motivated, talk about composure, tell them to move the ball and the chances will come.” 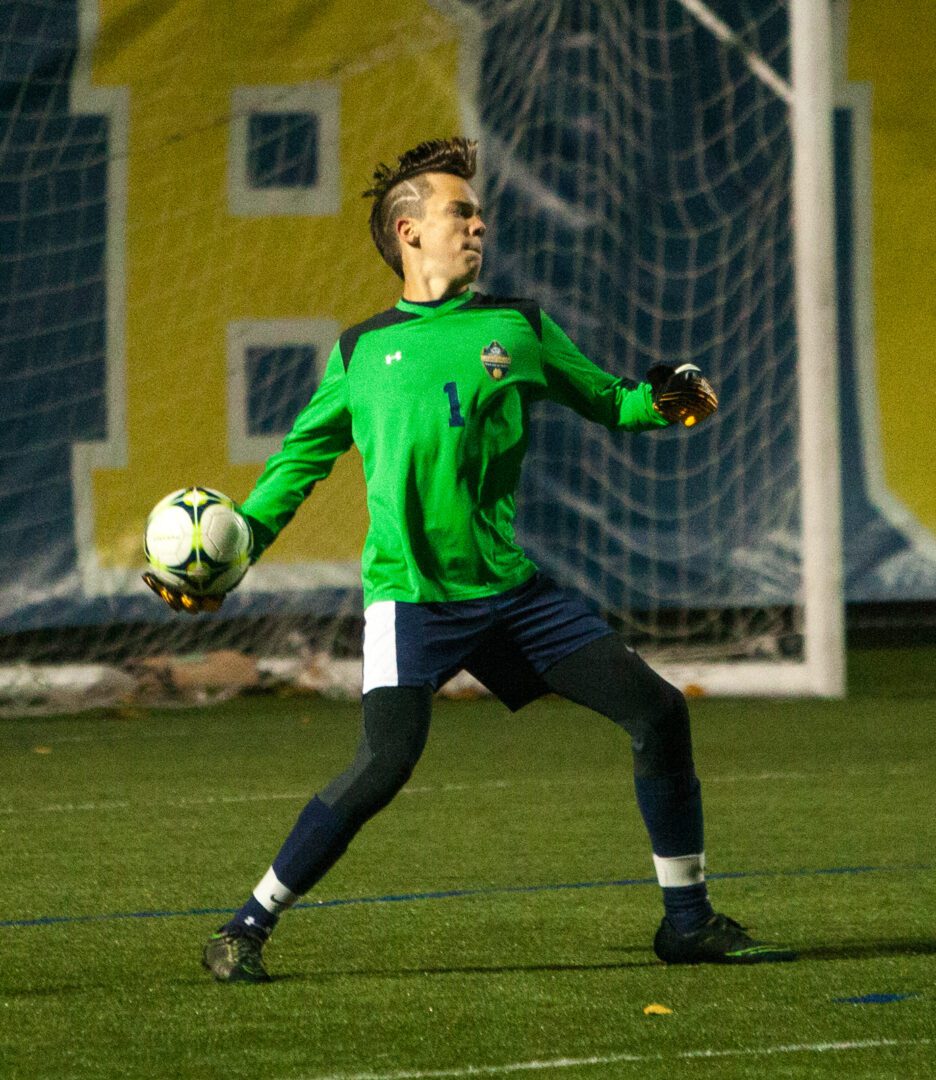 Grand Haven goalie Brenner Kar winds up to make a pass after posting the save. Photo/Jason Goorman

With the win, the Bucs (13-3-3 on the season) advance to Wednesday’s district semifinal game against Jenison, a 3-2 winner over West Ottawa Monday.
In the shootout, Sam Scarpino  scored for Grand Haven in the first round, while Mona Shores’ George Deveau did the same.
Jack DeKlyen scored to give Grand Haven a 2-1 lead, and GH goalie Brenner Kar preserved it with a diving save on a Mona Shoers shooter.
Mason Mahacek put Grand Haven up 3-1 on the next third round, before Hayden Yaros scored for the Sailors to cut the lead to 3-2.
Grand Haven couldn’t increase its lead because Sailors goalie Keegan DeKuiper made two diving saves to keep the game within one goal for Shores.

After the Sailors’ fourth attempt was shot high, it came down to a final attempt by Mona Shores’ Ethan Brown, and a chance to tie.

The sophomore hit it hard, but Kar dove to his right, stretched his arms and knocked the ball away from the net, clinching the win for Grand Haven, 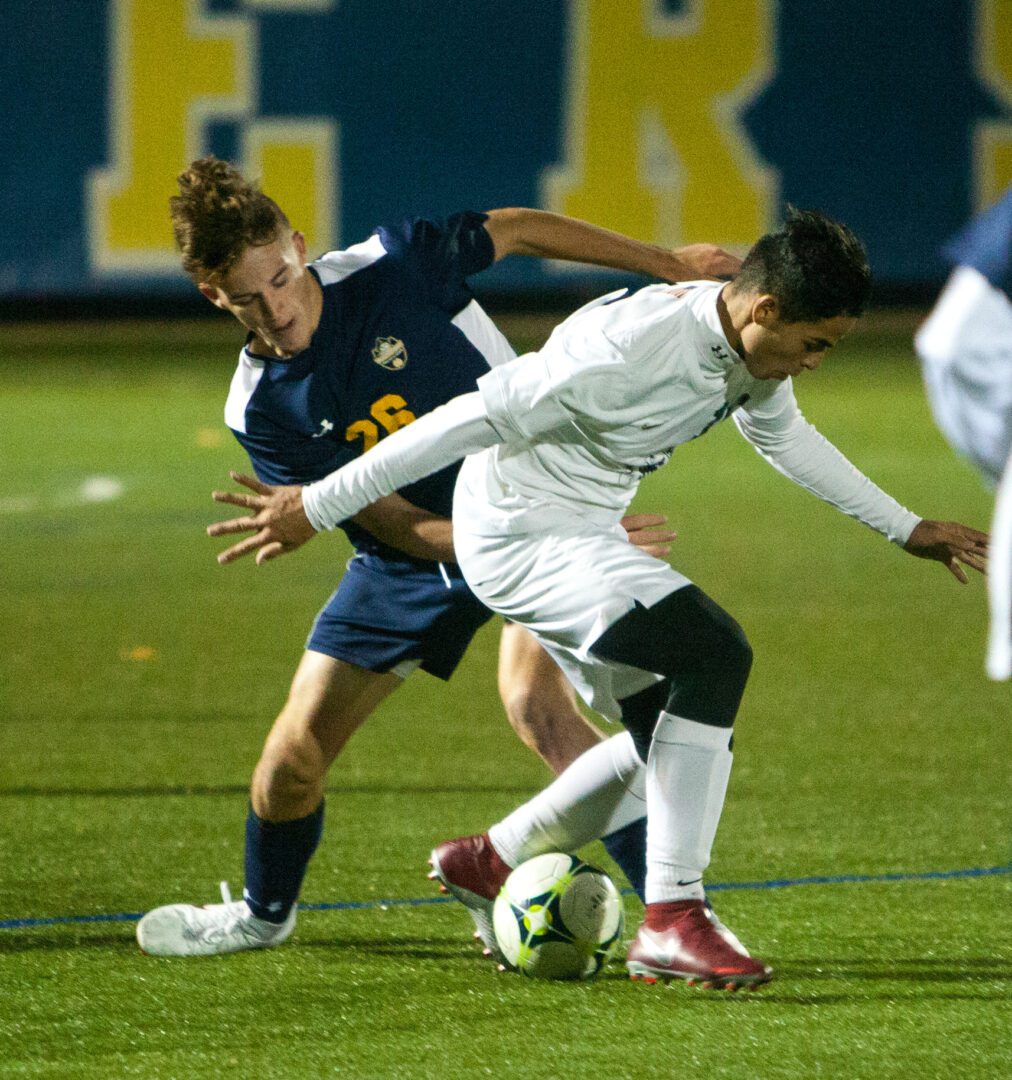 “All I was thinking is my senior season could be over,” Kar said. “I wasn’t about to let it go.”
The game could have easily been over in the first half, had it not been for DeKuiper’s goalkeeping and some bad luck for the Bucs.
Just 1:45 into the game, DeKlyen fired a shot off the crossbar, and 16 minutes after that, DeKuiper made a diving save on a header from Cole Tubergen.
Tubergen had two more excellent scoring chances in the first half, but fired a shot wide after a turnover in front of the net, and hit the post with 5:10 left in the half.

After being outshot 8-1 in the first half, the Sailors offense was more aggressive in the second half, but couldn’t find the net, shooting wide on its two best chances.

Overtime consisted of two 10 minute periods, with a two minute break in between. 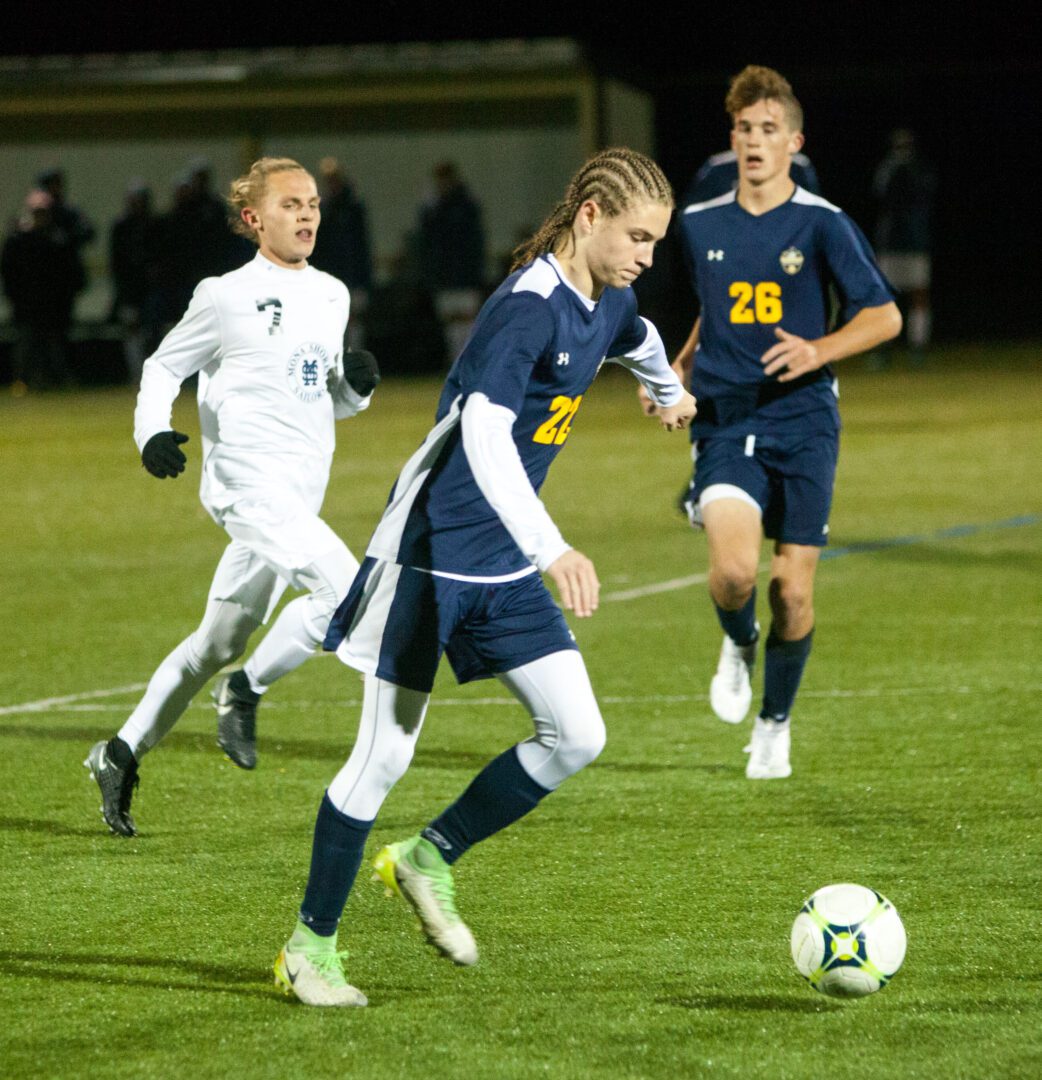 In the opening OT, Mona Shores had its best scoring opportunity of the game, with a free kick, but Yaros’ shot went high over the net.
With 30 seconds left, the Bucs once again hit the crossbar, this time off a header by Gavin Jonker.
With both teams coming up empty, the chance to advance came down to the shootout, where Kar came up big for Grand Haven.
“They say that there are tricks (to reading shooters),” the senior netminder said. “Look at their hips or foot as they’re swinging – but I usually just guess.”
DeKuiper finished with 17 saves in regulation and overtime, while Kar had three saves for Grand Haven.