victory, like the Muskegon Lumberjacks’ 6-0 whipping of the Chicago Steel on Saturday.

The real test is how a team responds when things go really badly, and it faces a big deficit. 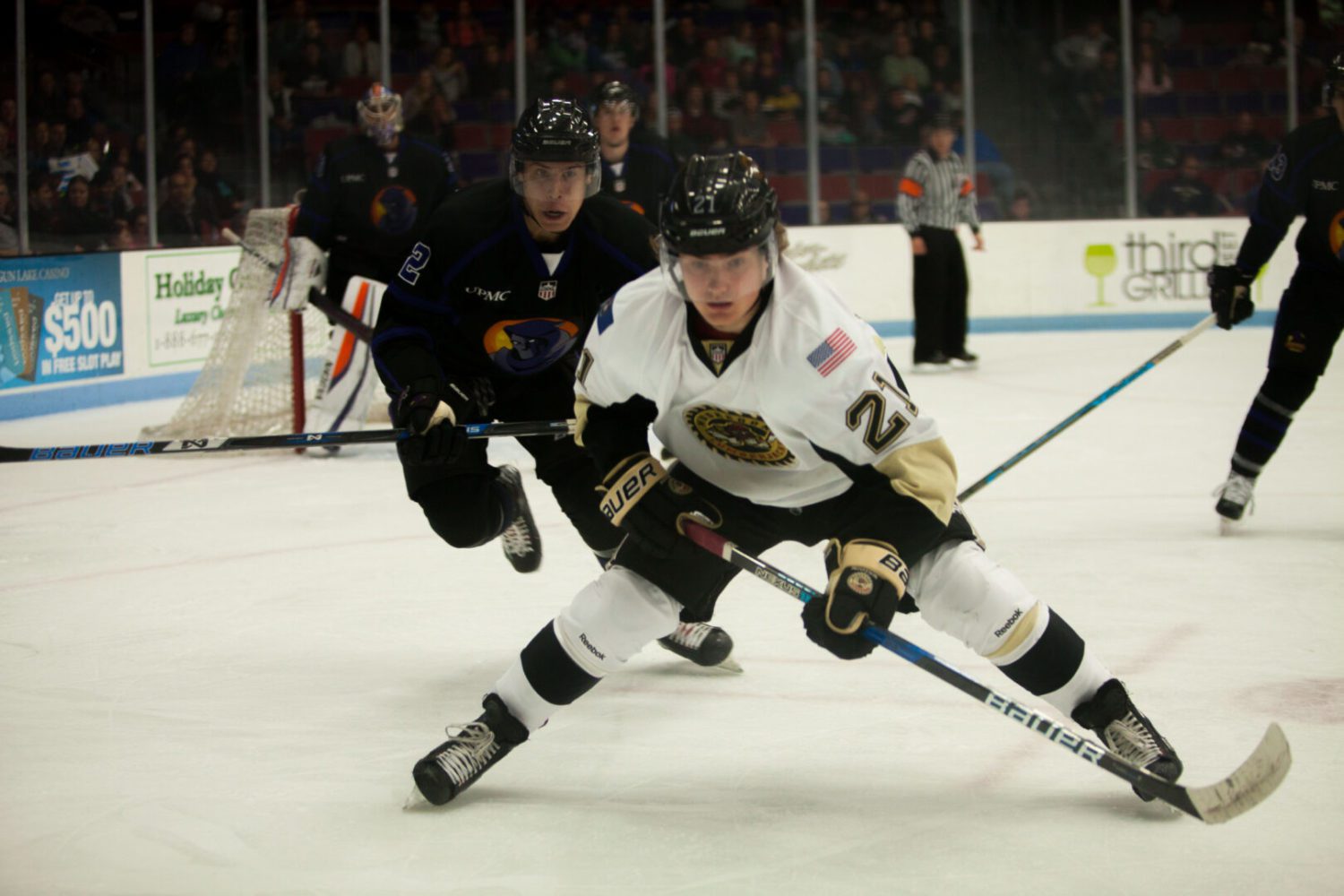 Christoffer Bjork closes in on the puck for Muskegon. Photo/Jason Goorman

The Lumberjacks more than passed that test on Sunday, and kept their impressive season-opening winning streak intact.

The Jacks had a terrible first period and found themselves trailing the Youngstown Phantoms 3-0 at the first break. But they kept fighting back, tied the game twice, and finally claimed a thrilling 5-4 victory at L.C. Walker Arena.

The game-winner came with 12 minutes left in the game, when forward John Farinacci sliced through a pair of defensemen, broke in alone on Youngstown netminder Jon More, and buried a wrist shot that gave the Jacks yet another victory.

Muskegon is now a perfect 6-0 on the season, good for 12 points and first place in the USHL’s Eastern Conference. The Jacks will return to action on Friday night in Chicago.

“I was just going down the wall with speed and (teammate Colby) Bukes made a nice pass and I saw the top wide open, so I just put the puck there,” Farinacci said. 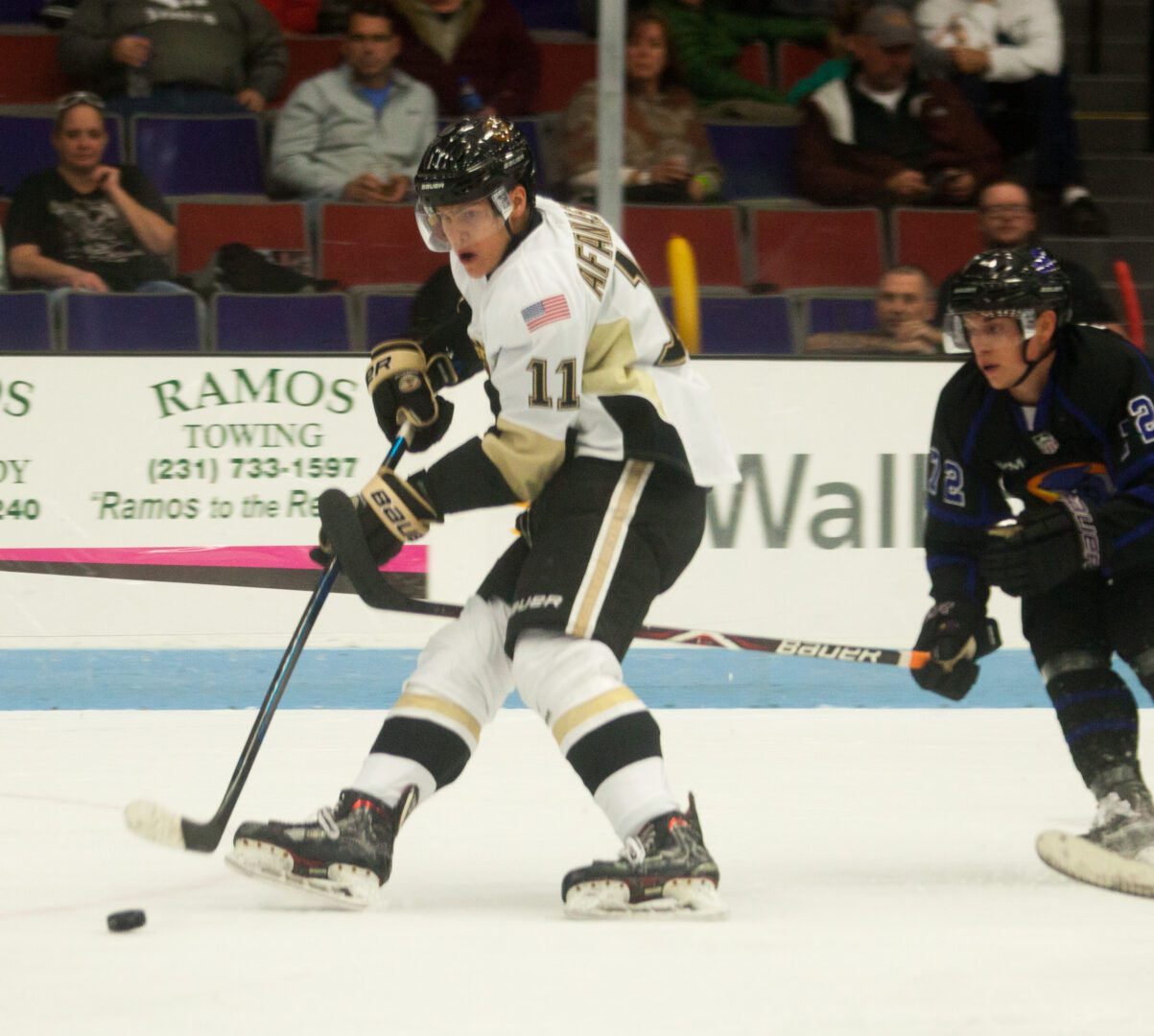 Muskegon’s Egor Afansyev digs out a pass near the Youngstown net. Photo/Jason Goorman

“Our backs were against the wall early and we didn’t make any excuses. We just went out there and kept working hard, and obviously the results showed.”

The first period couldn’t have gone much worse for the Jacks, who were probably a bit groggy after their emotional win over Chicago in their home opener on Saturday.

Youngstown collected three unanswered goals ,two by Craig Neeham and one in between from Connor MacEachern. Both of Needham’s goals were shorthanded, on Lumberjack power plays. The first came just 17 seconds into a Muskegon power play, and the second came 17 seconds in.

The Phantoms outshot the Lumberjacks 15-5 in the first period.

But the Lumberjacks regrouped in a big way in the second period, getting goals from Mikael Hakkarainen. Alex Gaffney and Matt Staudacher, to tie the game 3-3 at the second intermission.

Muskegon had a 15-7 shot advantage in the second.

“We knew coming in that this was their (Youngstown) only game this weekend, and we were coming off a high-energy opening night, so we knew it was going to be a slow start,” said Muskegon Coach Mike Hamilton.

“It could have been worse if (goalie Brandon) Bussi didn’t make the saves he did. The good news is the guys looked into the mirror and responded, which is a sign of a good hockey team.”

Youngstown jumped back on top 4-3 just 2:57 into the third period on a goal by Matthew DeMelis.

But the Jacks tied the score again at the 5:04 mark when Cam McDonald picked up rebound in a crowd in front of the Youngstown net and popped it in.

Farinacci scored the go-ahead goal three minutes later, sending the crowd into a frenzy, and the Jacks held on for the win, even after Youngstown pulled its goalie in the final minutes for an extra attacker.

“It was not pretty by any means, and we are not proud of it, but the fact we got a W, we will walk away and be happy about it,” Hamilton said.

Russi stopped 28 of 32 Youngstown shots to collect his sixth win of the season. His impressive shutout streak of two straight games and seven periods came to an end, but he made several big saves in key moments to keep the Jacks’ hopes alive.

North Muskegon takes third on Wednesday, bounces back with title on Friday