MONTAGUE — Drew Collins was born and raised around Montague football.

It was hard not to when his father, Pat Collins, took the head coaching position at the
school 15 years ago, when Drew was still in diapers.

“In 2008, I remember walking down the tunnel at Ford Field and just all the excitement around that,” Drew said, recalling Montague’s victory in the Division 6 state championship game against Leslie that year. “I was the ball boy.

“I’ve been friends with a lot of the older players, and I remember Bryce Stark’s mom saying in like third or fourth grade that maybe one day, I’ll get a chance to play with Bryce when I’m a sophomore,” he added. “For it to be actually happening now, I’d say it’s a dream come true.” 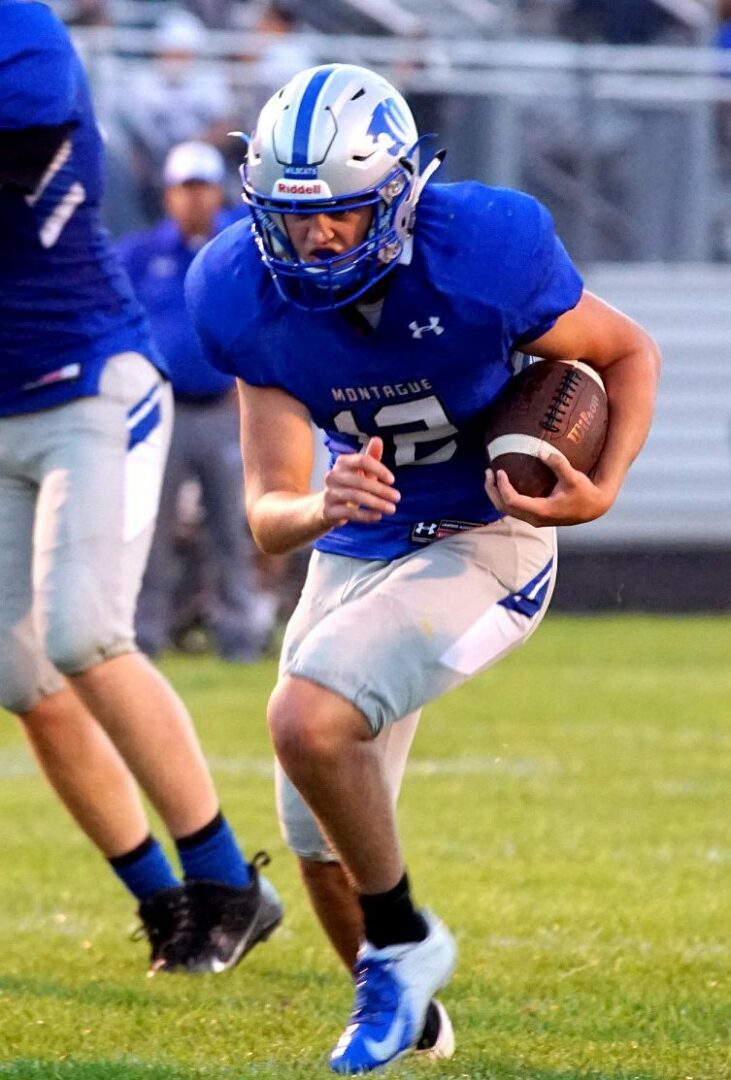 Collins, Stark and the rest of the Wildcats head to West Michigan Conference rival Oakridge on Friday in one of the biggest games of the season. The contest will not only determine the likely conference champion, but it could also have huge ramifications for the postseason, especially if Montague joins Oakridge in the Division 5 field as expected.

Collins’ emergence at quarterback for the Wildcats this fall wasn’t in the original plan. Montague returned both Stark, an all-state running back, and senior Sebastian Archer at quarterback, two key players who helped lead the Wildcats to the Division 6 regionals a year ago.

But when Stark injured his knee in a stunning season-opening loss to Reed City, head coach Pat Collins felt it was necessary to shift Archer from quarterback to running back in Week 2, to ensure the offense remained cohesive. And Collins, his 6-foot-2 sophomore son, was inserted as the new signal-caller.

Things got even more complicated in Week 3, when Archer was knocked out of action with a shoulder injury.

Fortunately, Stark appears to be back to his dominant self, and Archer is also close to being 100 percent in time for Friday’s showdown.

“It’s been a challenge,” Coach Collins admitted. “This team has been through some things that last year, or our other teams, never had to. Really, the injuries have been a blessing in disguise. I wouldn’t want to say that, thinking about the kids who have been lost to injury. But our depth has gotten better. Some of the younger kids who weren’t ready to contribute early on have developed. And we’re still climbing.” 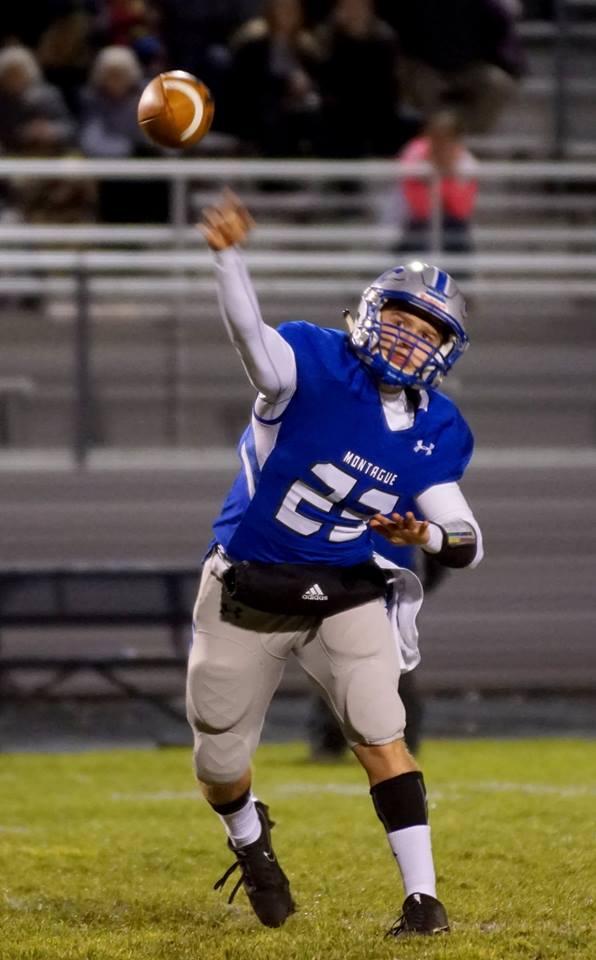 But Drew Collins’ rapid development at quarterback has helped ease some of the strain of the rash of injuries. He said he felt like he really belonged at the position after the first series against rival Whitehall.

“The first few games were blowouts, but the first big game I was in was Whitehall, and it was really nerve-wracking,” Collins said. “But we scored a touchdown after just a few plays and I started to feel a lot more comfortable.”

Collins has thrown for 640 yards and six touchdowns and has also proven to be dangerous running the ball when needed. He credits his strong play to working with the star of that 2008 Montague title team, Cody Kater, who is now the Wildcats’ quarterback coach.

“Just going over all the offensive schemes and plays with him in January and February, it helped me get comfortable and know all the plays,” Collins said. “We’ll visualize in practice our different offensive sets and what the defense may bring. We’ll draw it up on a board, all of our schemes.”

His rapid development has also made the elder Collins one proud papa.

“Drew’s really growing up fast,” Pat said. “He’s improving in front of our eyes. He grew about a half inch during the summer, and I think he’s finally starting to grow into that body. He’s really developing not only physically, but also socially, emotionally, everything. He’s really taken off through the season.” 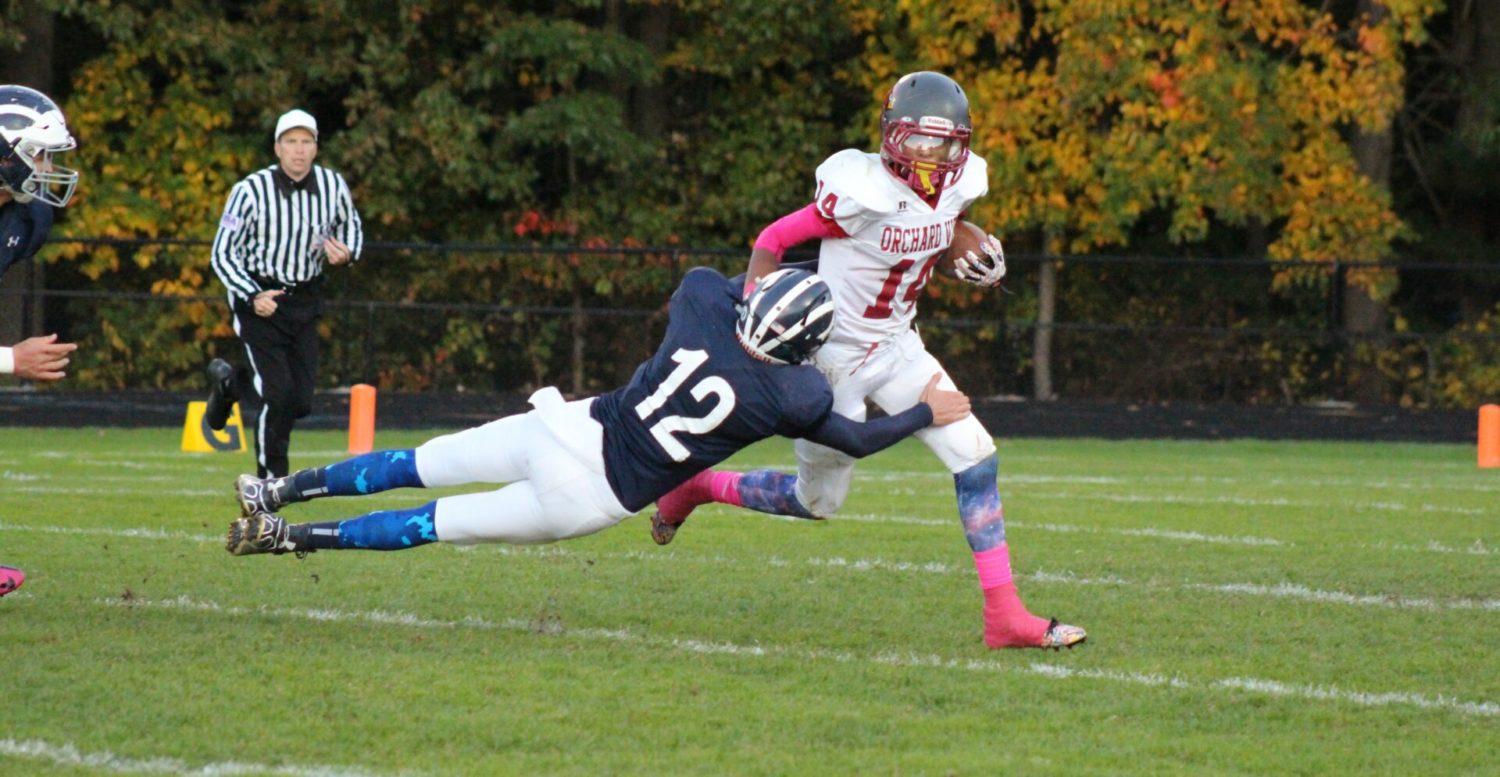