By Steve Gunn, Dave Hart and Mitchell Boatman
LocalSportsJournal.com
DETROIT — There was a reason the Muskegon Big Reds were wary when they heard that Detroit

football playoffs.
They knew they could beat King, because they did it in the second game of the regular season. But they also learned how dangerous the Crusaders could be, and knew it would be difficult to defeat them again.
In the end the Big Reds failed to complete the sweep, falling to Detroit King 41-25 on Saturday in the Division 3 state championship game at Detroit’s Ford Field.
Muskegon finished another great season with a sparkling 13-1 record, an O-K Black Conference championship, and Division 3 district and regional championships. 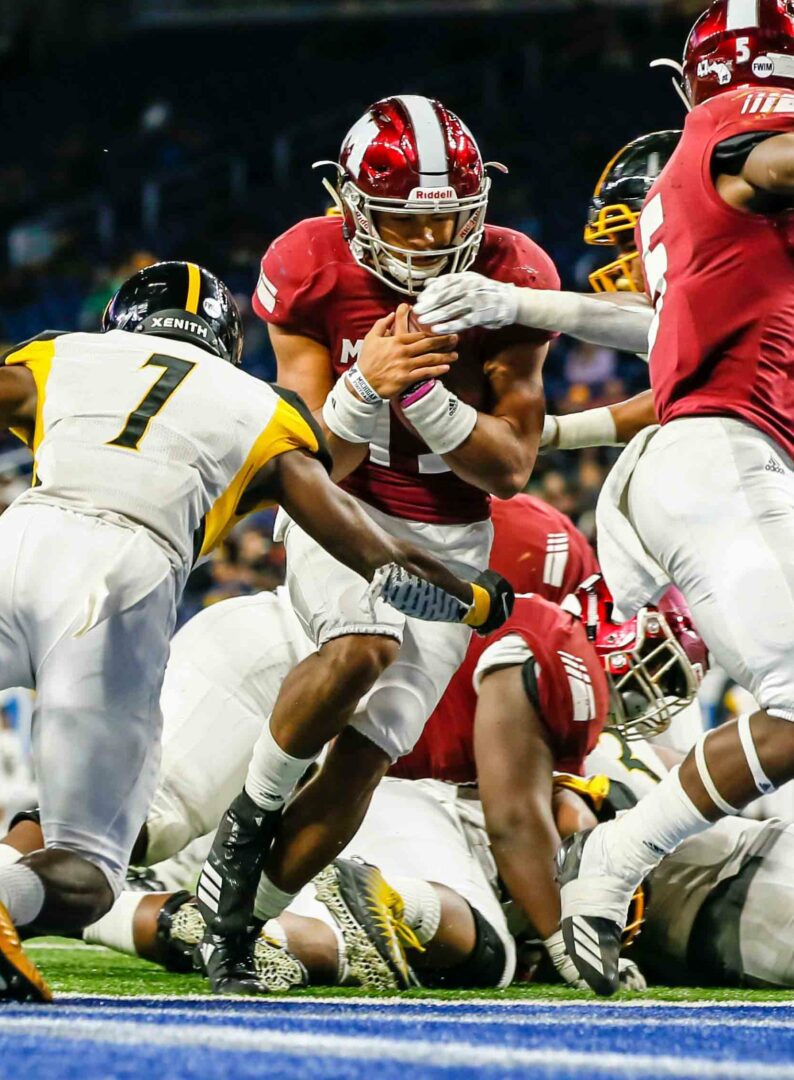 Cameron Martinez barrels his way into the end zone for a Muskegon touchdown. Photo/Tim Reilly

But they failed to defend their 2017 state championship, their 27-game game winning streak ended, and they experienced another defeat on the big stage.
Muskegon has appeared in state championship games in six of the past seven seasons, but has lost five of them.
But when it was all over, Muskegon Coach Shane Fairfield proudly reflected on what a great run his team has had.
“I’m proud as heck of those guys,” Fairfield said. “That is not how we wanted it to end, but we’re proud of 27 games. We’re proud of getting here. They’ve battled, they’ve grown and they’ve given me another 14 weeks that I can say for the rest of my life that I was able to coach them.
“This is fun. Losing is not fun, but winning 13 games, winning 27 in a row and getting back to another state championship game and winning all those trophies along the way was.”
The game turned out to be a contrast in styles, with Muskegon controlling the time of possession with long drives that ate up the clock.
Muskegon finished the game with a 21-15 advantage in first downs, a 302-227 edge in rushing yards, and a 29:36 to 18:05 advantage in time of possession.
If those stats counted on the scoreboard, the Big Reds would have won.
But Detroit King countered with a quick-strike offense, and it proved to be too much for Muskegon.
The contest was also a showdown between two of the better quarterbacks in the state – Muskegon junior Cameron Martinez and King senior Dequan Finn.
Martinez had another great game on the ground, rushing 37 times for 211 yards and two touchdowns.
But Finn did his damage through the air, and it proved to be decisive, completing 9 of 13 passes for 173 yards and four touchdowns. Muskegon only gained 13 yards through the air, and had two very costly dropped passes in key situations in the game.
“Our quarterback made some great plays, and they made some great plays,” Fairfield said. “Their quarterback is an amazing kid. It was a combination of (Finn) being a great player and us not making plays.” 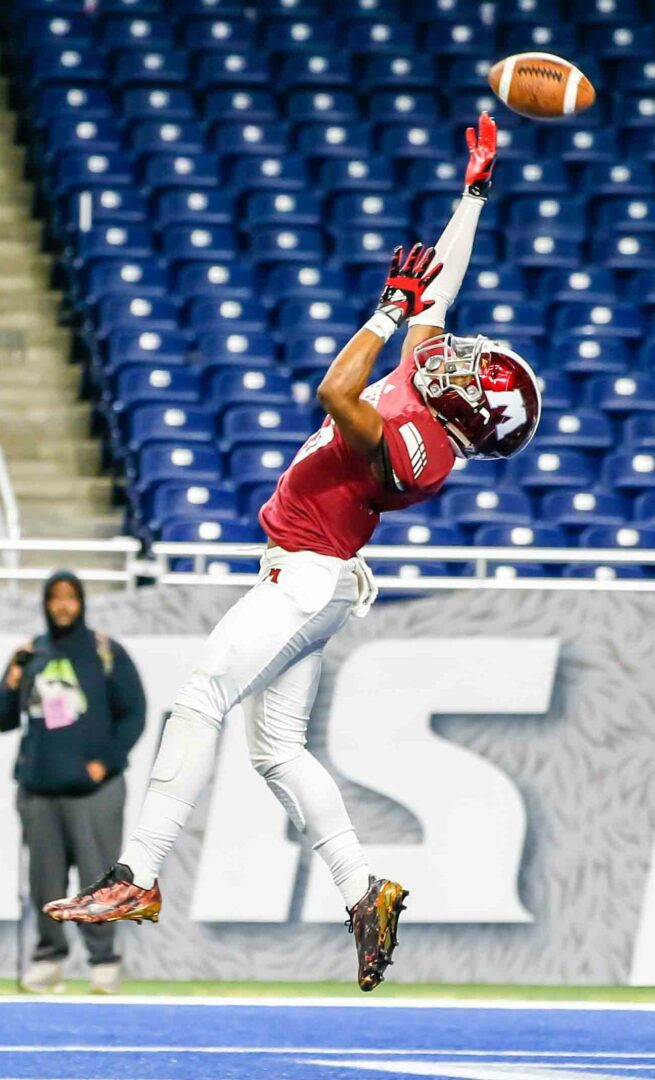 The contest was a nail-biter for three quarters.
Muskegon struck first on its first possession of the game. The Big Reds started at their own three-yard line, but embarked on a 97-yard, 13-play scoring drive that took nearly seven minutes off the clock.
The effort was capped by a 10-yard touchdown run by Martinez with 2:45 left in the first quarter.
But King unfurled its quick-strike offense just 75 seconds later, when Finn found Dominick Polidore-Hannah for a 42-yard touchdown strike, and the extra point tied the game at 7-7 with 1:30 left in the first quarter.
Finn and Polidore-Hannah hooked up for a second touchdown, this one a 22-yard score, midway through the second quarter to give King its first lead, 14-7, with 6:50 to play in the half.
The Big Reds picked up a crucial three points when Carlos Hernandez-Sias connected on a 37-yard field goal as time expired in the first half, leaving King with a 14-10 lead at the break.
The Big Reds got the ball to open the third quarter, but a handful of miscues cost them their shot at the lead. A long, would-be touchdown pass was dropped on third down. Muskegon then punted the ball to the King 15, but was called for a penalty on the play and had to re-kick.
On the re-kick, the ball was snapped over Hernandez-Sias’ head. He managed to recover the ball and get a kick away, but the Crusaders ended up with great field position at the Muskegon 30.
King scored five plays later on a seven-yard run by Finn with 9:16 left in the third quarter, extending its lead to 21-10.
The Big Reds answered with another long drive that spanned 62 yards in 13 plays and took more than seven minutes. Martinez capped the drive with a two-yard TD, and the extra point made the score 21-17 with 2:02 left in the third quarter.
But King took control in the fourth quarter.
Finn led King back down the field on the next drive, and fired a 22-yard touchdown strike to Ahmad Gardner to cap a nine-play, 73-yard drive. The score gave the Crusaders at 28-17 lead with 9:26 left to play.
Muskegon punted on its next possession and King took advantage, scoring on a 52-yard run by Peny Boone on the first play from scrimmage, making the score 35-17 with just 6:29 to play.
The Big Reds kept playing hard. Martinez found Ali’Vonta Wallace with a 13-yard touchdown pass, then ran in the two-point try with 5:21 to play, pulling Muskegon within 10 points at 35-25.
Muskegon attempted an onside kick, but King recovered, then converted a crucial fourth down play with 2:54 remaining to maintain possession.
The Crusaders scored with 2:35 to play on a Finn pass that was deflected by a Muskegon player in the end zone, then was hauled in by Darrell Wyatt for a three yard score that iced the victory.
“It hurts a lot,” said Martinez, who was a state championship quarterback two years ago as a freshman at Muskegon Catholic Central. “You work so hard and you’re at the last game and you failed, and that’s something you remember for awhile.
“Credit the other team who is a great team, and to us for fighting hard. There were a lot of plays that could have been big for us, but were dropped passes and a missed interception. In a game like this you can’t afford to make mistakes.”
Demario Robinson rushed for 50 yards on six carries for Muskegon. Ali’Vonta Wallace led the defense with seven tackles while Tarran Walker added six.
Boone led King on the ground with 122 yards on 14 carries and one touchdown. 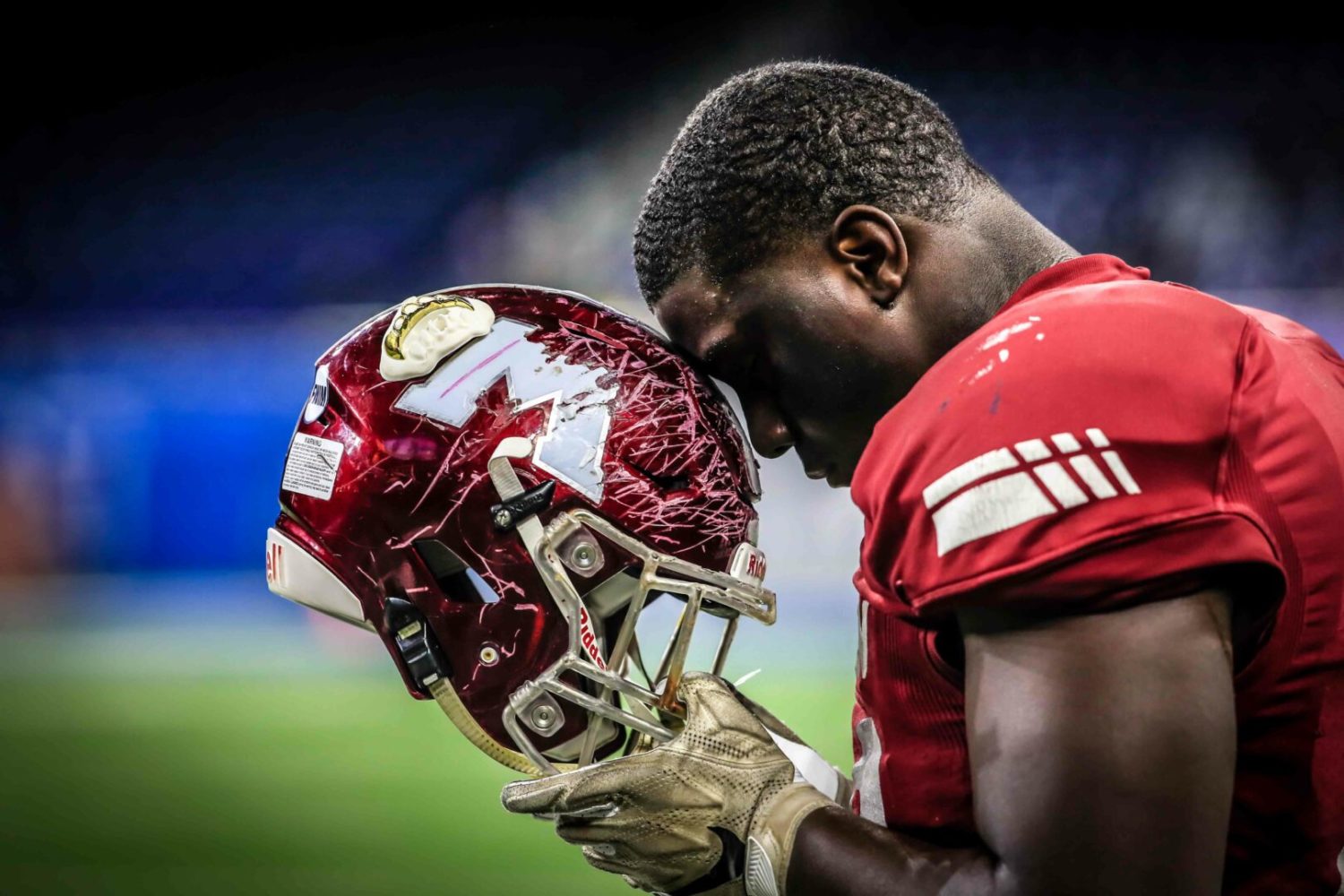 Muskegon’s Da’quarious Johnson holds his helmet while he prays before the game. Photo/Tim Reilly