By Steve Gunn
LocalSportsJournal.com
HOLTON – Just a few weeks ago, the Holton Red Devils were chewing their nails, waiting

and wondering if they were even going to qualify for the state football playoffs.

They managed to squeak in with a 5-4 regular season record, despite the fact that the general qualifying standard is six wins. For most teams in that position, just making the postseason would have been good enough.
But Holton obviously had other ideas.
The Red Devils have gotten hot at the perfect time, reeling off three straight playoff victories, including Saturday afternoon’s thrilling 14-6 regional final victory over Mendon in front of a big, excited crowd on their home field. 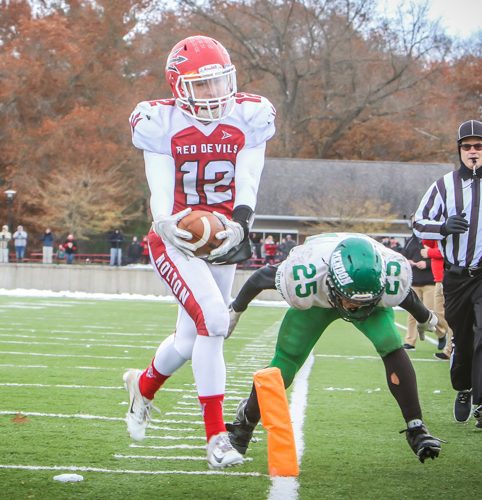 Now Holton is heading for the Division 8 state semifinals against Reading, which defeated Detroit Southeastern 54-0 in another regional final on Saturday. That game will be played next Saturday at 1 p.m. at Battle Creek Harper Creek High School.
The winner will advance to Detroit’s Ford Field to play for a state championship.
For Holton Coach Jack Nummerdor, whose career at the school will end whenever the football season is finally over, the run to the semis has been an exciting bonus.
Nummerdor accepted a position with Mona Shores schools earlier in the season, but only on the condition that he could end the season with his team.
“We’ve been saying since I took over this program, just let us get in (the playoffs),” said Nummerdor, whose team plays a schedule full of bigger schools every year and had not made the playoffs since 2007. “We knew we could make something happen. 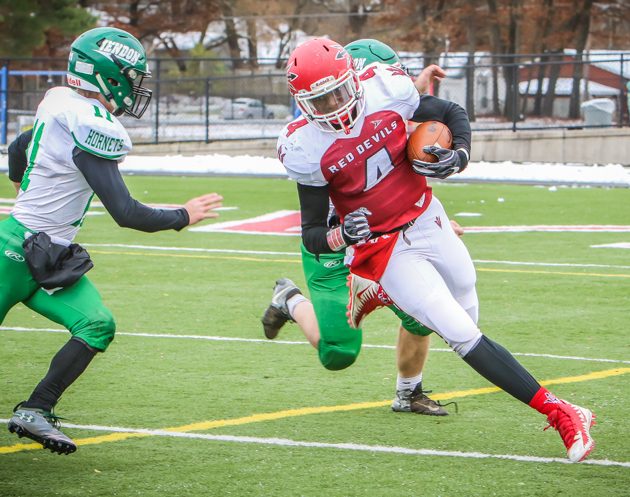 Aaron Herron tries to find the edge on the Holton rush. Photo/Joe Lane

“We went from crying because we thought we were done (after the regular season) to crying because we were hosting a regional championship game – and now we’re hoisting a regional championship trophy. It’s been amazing. We’re going to ride this wave as far as it will take us.”
Saturday’s victory was all the more sweet for Holton, because the outcome was very much in doubt near the end.
Mendon, a state semifinalist last year, trailed by eight points and had the ball at the Holton 37-yard line with 1:49 left in the game.
Mendon quarterback Cole Decker rolled out of the pocket and lofted a pass, hoping to put his team within striking distance of the end zone.
But Holton junior linebacker Kaleb Kitchka leaped and came down with the ball around the 20-yard line for his second crucial interception of the game. 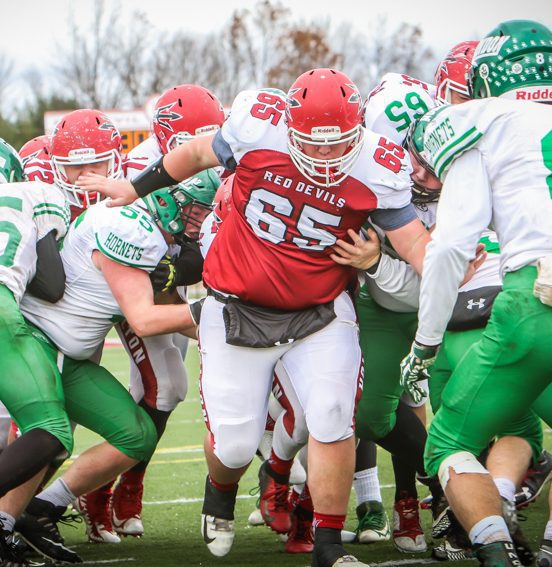 Holton’s No. 65 Colby Younts clears the way through the pile. Photo/Joe Lane

A few plays later the Red Devils were taking a knee and killing the last few ticks off the clock, before proudly accepting a regional championship trophy.
“All I know is that I had the feeling that I had to drop back,” Kitchka said about his interception. “It was obviously a pass, I saw the ball go up, and I knew one of my teammates was behind me. I just remember thinking, if you (the teammate) jump over me and make me drop this, I will lose it!
“Our defense has had a bend-but-not-break mentality all season, and you saw it today, we bent but never broke.
“At the beginning of this season nobody thought anything would come out of it, so to actually win this is like a Cinderella story.’
Big plays on defense made all the difference for Holton, which did not start the game on a promising note.
The Red Devils took the opening kickoff, but fumbled and lost the ball in the first play from scrimmage, giving Mendon great field position at the Holton 45. 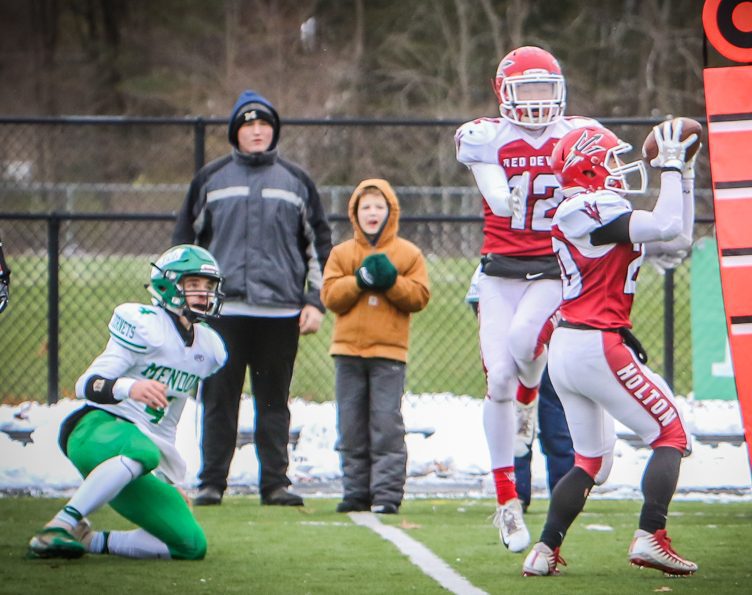 The Hornets drove all the way to the Red Devil 14 and faced a fourth-and-4 situation. The Holton defense held, took over on downs, and ended the threat.
Later in the first quarter, a bad Mendon punt gave Holton the ball at the Hornet 34. The Red Devils went on an eight-play scoring drive, capped by a two-yard touchdown burst by quarterback Drew Trygstad.
The PAT kick by Elia Lamparth gave Holton a 7-0 lead with 28 seconds left in the first quarter.
Kitchka got his first interception of the day early in the second quarter, giving Holton the ball at the Mendon 35.
The Red Devils took advantage five plays later when sophomore running back Austin Hawkins first ran to his right, encountered traffic, then changed directions and outraced the Hornets to the end zone for a 19-yard touchdown run.
Lamparth’s second PAT gave Holton a 14-0 edge. 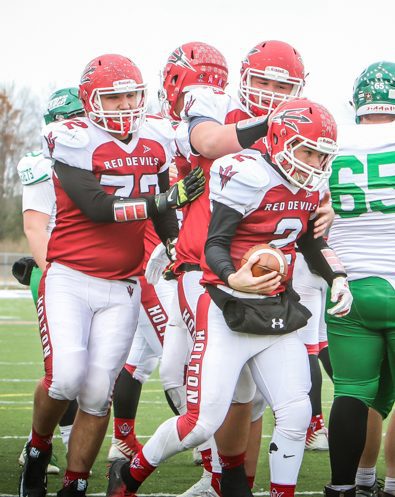 Holton QB No. 2 Drew Trygstad is congratulated by his teammates after the play. Photo/Joe Lane

Mendon took the ensuing kickoff and went on a sustained 14-play drive to the Holton 11-yard line. The Hornets faced a fourth-and-9, but again the Red Devil defense stepped up, dropping Decker just short of the first-down, and Holton managed to end the half with a two touchdown advantage.
The Hornets took the second-half kickoff and drove to the Holton 42, before again turning the ball over on downs.
Mendon finally broke through on its next possession, which started at the Holton 35-yard line following a very short Red Devil punt. Running back Austin Rensi carried the load, getting the ball for eight straight plays and finally scoring on a two-yard run just seconds into the fourth quarter.
The Hornets attempted a two-point conversion, but again Kitchka make a key play for Holton, dropping the Mendon ball carrier in the backfield to leave the score 14-6.
But the visitors were far from done. After a Holton punt, they drove 70 yards to the Holton 10, where they faced a fourth-and-7 situation. Decker lofted a pass into the end zone, but it fell incomplete, and the Red Devils dodged another bullet.
The Hornets’ last and perhaps best chance came when they got the ball at the Holton 37 with 1:49 left. But they were only able to run one play before Kitchka snagged his final pick , which sealed the win for the Red Devils.
“Kaleb plays way bigger than what he is – he’s maybe 5-foot-6 and 160 pounds soaking wet,” Nummerdor said about Kitchka. “We talk a lot about heart around this place, and he fulfills that, he lives that out every day.
“We all know the truth, that defense wins championships. Without them today it would not have been the same scenario.”