By Steve Gunn
LocalSportsJournal.com
HOLTON – Did somebody send away to Hollywood for the perfect script for Holton’s football season?

Feel-good stories, and great comeback tales, just don’t get much better than this.
Holton will be playing in the Division 8 state semifinals on Saturday against undefeated Reading at 1 p.m. at Battle Creek Harper Creek High School.
No matter what happens in that game, Holton fans will never forget how the team got there.
The Red Devils (8-4) started the season on a very hopeful note, winning five of their first six games, and needing only one more victory to clinch an automatic state playoff berth. 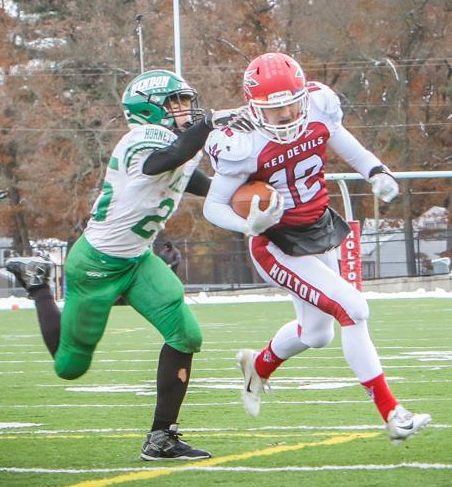 No. 12 Austin Hawkins finds room around the corner on a TD run in Holton’s regional championship win over Mendon. Photo/Joe Lane

But things went downhill from there, at least for a time.
Holton lost its last three games of the regular season – 46-0 to Kent City, 29-22 to Pine River, and 48-16 to Tri-County. The Red Devils were stuck at five victories, one shy of a playoff berth.
But every year a handful of five-win teams around the state sneak into the playoffs, to round out the field in the eight divisions. The Red Devils learned on the weekend following the Tri-County game that they were one of those teams, and there was unexpected new life.
Holton took advantage. The Red Devils opened the playoffs by squeaking out a 25-24 win over Martin, then defeated Decatur 34-7 to win a district title.
The high point of their season – at least so far – came last Saturday, when the Red Devils snuck past Mendon 14-6 in front of a big, excited crowd on their home field to claim a regional championship.
Suddenly the team that thought it missed out on the playoffs is in the state final four. It’s the first trip to the state semifinals in program history. 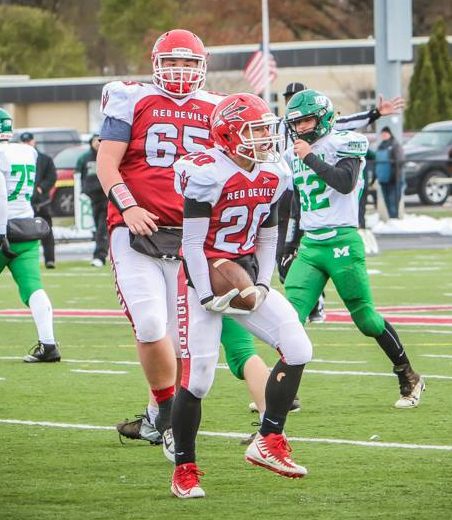 No. 20 Kaleb Kitchka erupts after getting a big play while and No. 65 Colby Younts gets ready to follow suit during Holton’s regional final win over Mendon. Photo/Joe Lane

Which begs an obvious question – how does a team that finished the season with three straight losses – including two pretty ugly ones – suddenly pull it all together and go on a great playoff run?
“A ton of credit goes to the kids,” said Holton head coach Jack Nummerdor. “They felt like it was a new beginning. They just erased what happened and took it and ran with it.”
Another factor, according to Nummerdor, is that Holton is finally playing schools its own size. As the smallest school by enrollment in the Central State Activities Association, the Red Devils are used to having so-so luck against Division 5, 6 and 7 opponents.
But now the other teams are Division 8, just like Holton, and it’s made a real difference.
“We reminded the kids that they will be playing schools our own size, and that was a huge confidence- builder for them,” Nummerdor said.
In the midst of the exciting playoff run is quite an emotional subplot.
Nummerdor, who has become a popular coach and athletic director in his five seasons at Holton, broke it to his players during the regular season that he had accepted the post of assistant principal and athletic director at Mona Shores Middle School. 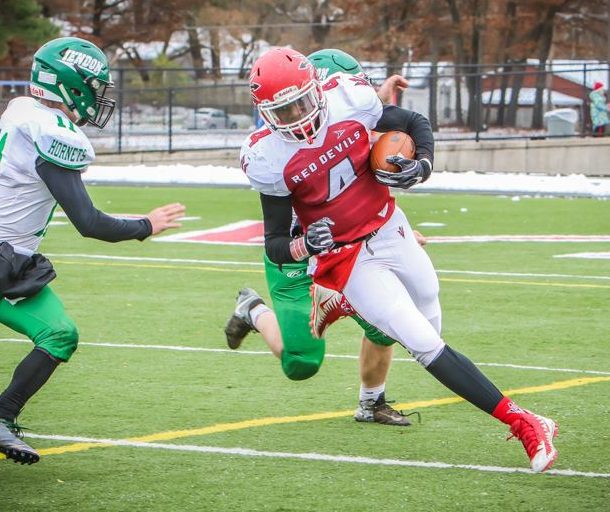 Holton running back No. 4 Aaron Herron has come up big for the Red Devils this season and continued in his team’s win over Mendon for the Division 8 regional title. Photo/Joe Lane

He said he took the job so he could spend more time with his family, including his very young children. And he only accepted on the condition that he could finish the season with his team. But when it was over, his time with the Red Devils was done.
Nummerdor admitted he became emotional when he met with the players and told them he was leaving.
“When I had to tell them I accepted the job, I was crying, and I asked the kids to say what they wanted to say,” Nummerdor said. “Colby Younts said, ‘Coach when you cry, it makes me want to cry.'”
There were more tears after the last regular season game, when it seemed like the season, and Nummerdor’s Holton career, had come to a disappointing end.
“After Week 9, when we lost to Tri-County, I was out on the field for an extra half hour crying, thinking it was all over, and there was still business to be done,” the coach said.
But of course those tears were premature. Nummerdor’s Holton run has been extended for three straight weeks, and the fact that the players want to keep him around has been a big motivator.
“If this is their way of doing that, I appreciate it,” the coach said. “But it’s not so much that they get to keep me, but that I get to stay around them a bit longer.”
Holton’s biggest asset on offense is a powerful running game, led by a pair of senior running backs – Aaron Herron (1,448 yards and 19 touchdowns) and Derek Pouch (789 yards and seven touchdowns). Another ball-carrier who has emerged is sophomore Austin Hawkins, who has 282 yards and three TDs.
The Red Devils can also pass effectively when they have to. Junior quarterback Drew Trygstad has completed 33 of 78 passes for 572 yards and five touchdowns this season.
A stingy defense has been a huge asset for Holton. The unit stood out in the regional victory over Mendon, getting three stops in the red zone to hold the Hornets to only six points in the game.
Leaders on defense include Kaleb Kitchka (who had 14 tackles and two huge interceptions against Mendon) with 128 total tackles, Draven Wyant with 118 tackles, Herron with 104 stops and Johnny Dominish with 80.
“That’s kind of how the defense has been all season, with a bend-but-not-break mentality,” Nummerdor said. “They have a lot of confidence being able to stop people.”
That defense may have its toughest challenge to date on Saturday against Reading (11-0), a team that has been on the rise for the past three seasons. In 2016 the Rangers called up 10 sophomores to varsity and went 3-6. Last year they made the playoffs and improved to 8-3, and this fall they are a perfect 12-0.
They have outscored opponents 601-92 this season, and have not scored fewer than 36 points in a game. In the playoffs they have defeated Pittsford 65-48, defending state champion Ottawa Lake Whiteford 68-28 and Detroit Southeastern 54-0.
Reading has a diverse offense led by senior quarterback Alex Price and senior tailback Ethan LoPresto. The Rangers like to pound the ball with both LoPresto and senior power back Anthony Willoughby. The Rangers are averaging 50 points a game.
LaPresto seems to be the main cog in the offense, piling up 1,954 yard and 25 touchdowns on the ground this year, but Price can take off and run as well. In the regional final win over Detroit Southwestern, the quarterback had three rushing touchdowns, including a pair covering 55 and 45 yards.
“They beat last year’s state champion,” Nummerdor said about Reading. “We saw that, and we know about them. They have a kid who can run the ball pretty good. He’s pretty darned fast. Their quarterback is big and tall and can throw a bit, and they are big up front on both sides of the ball.
“We know they’re good, but we’re here in the playoffs for a reason, and anything can happen.”

Sailor softball team beats West Ottawa in the opener, falls in the nightcap