By Steve Gunn and Dave Hart
LocalSportsJournal.com
MUSKEGON – For a lot of great teams in different sports, success depends on a few big scorers.

If those players go down with injuries, the team’s fortunes can sour fast.
But that’s certainly not the case for the Muskegon Lumberjacks.
They’re deep in the goal-scoring department, with a lot of players capable of doing damage on any given night.
That was evident again on Wednesday, when the Jacks continued their red-hot run with a one-sided 8-0 victory over the Team USA Under-17 squad at L.C. Walker Arena. 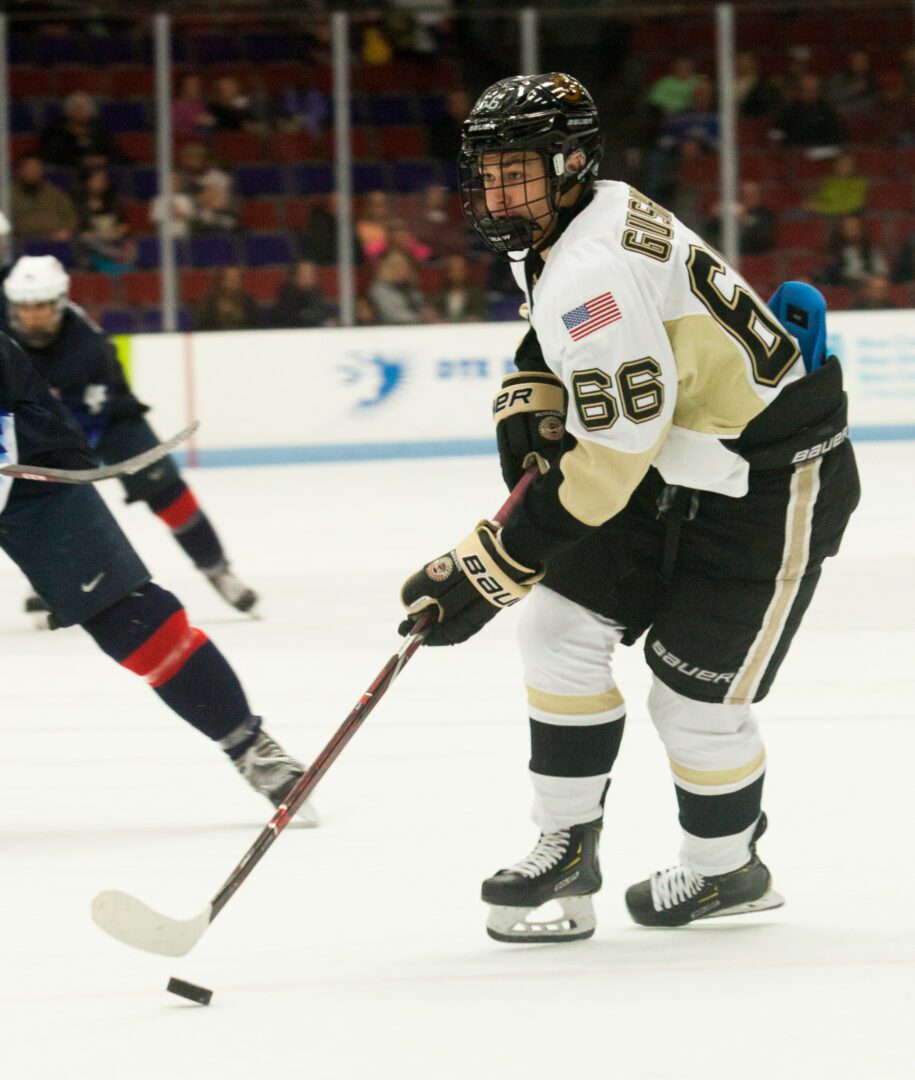 Muskegon’s No. 66 Danil Gushchin goes in for the shot. Photo/Jason Goorman

The victory was the third in a row for the Lumberjacks, who now boast a pretty amazing 14-2 record for 28 points in the USHL’s Eastern Conference standings. They are easily in first place, with at least a six-point cushion over second-place Central Illinois.
Muskegon will continue its four-game home stand with a pair of matchups against Green Bay on Friday and Saturday night. Puck drop is 7:15 p.m. for both games.
The remarkable part about Wednesday’s win is that seven different players scored for Muskegon.
Leading the way was defenseman Hunter Skinner, who scored his second and third goals of the season. Picking up single tallies were Jagger Joshua, Igor Larionov, Alex Yakavenko, Cam Knuble, Oliver MacDonald and Brock Bremer.
It’s been that way all season for the Lumberjacks. The scoring statistics tell the story.
The leading goal scorers on the team are Egor Afanasyev and Mikael Hakkarainen with eight apiece. They are closely followed by Bobby Lynch and Nolan Sullivan, who each have seven goals. Yakavenko and Bremer are next with six goals apiece, while Joshua and Alex Gaffney both have five.
Rounding out the leaders are Danil Gushchin with four goals.
“We knew coming into the season that’s what we were going to have,” said Lumberjacks Coach Mike Hamilton about the balanced scoring. “We’ve went through some periods where we rode a few player’s backs, but at the end of the day that is our strength. 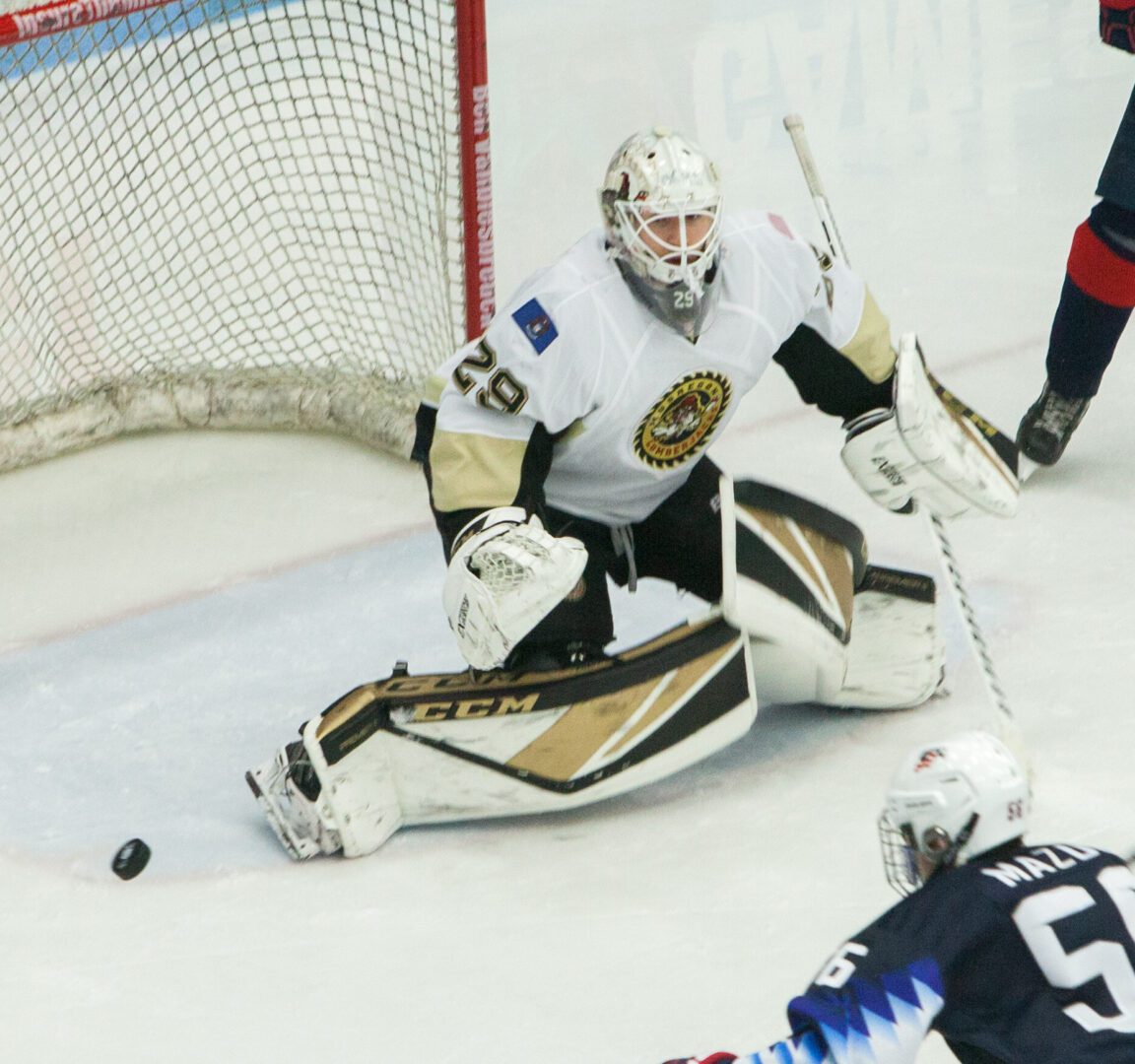 Brandon Bussi posts the save and his fourth shutout of the season for Muskegon. Photo/Jason Goorman

“Our strength is we come at teams with four lines. We are able to share the minutes and grind teams down.”
While the committee of scorers pretty much stole the show, the Jacks also received another great performance from goalie Brandon Bussi, who stopped 19 shots to post his second straight shutout and fourth of the season.
“I can’t speak enough about Bussi,” Hamilton said. “He doesn’t get enough credit. Two shutouts in a row, and I don’t care what the score was or wasn’t. You saw he made three or four saves there that were just unbelievable.”
The Jacks came out on fire, outshooting Team USA 13-1 in the first period and taking control with goals from Joshua, Larionov, Yakovenko and Skinner.
They widened their lead to 7-0 after two periods with goals from Knuble, Skinner and MacDonald.
Bremer scored the lone goal of the third period.
“We obviously had good focus from the puck drop,” Hamilton said. “We came out and played the game the right way. I thought that was one of the best puck-possession games we’ve played all year. This was clearly the best we’ve played with the puck, and I was really proud of the guys for coming out of the gate today.”
Colby Bukes had three assists for the Lumberjacks while Yakovenko, Afanasyev and Gushchin each added two.
Muskegon outshot Team USA 37-19.

Whitehall wrestlers move on to semifinals on Saturday