But they become even more impressive and more important in the state playoffs, when a bad game came mean the end of the season.

Martinez certainly did his part to make sure that didn’t happen on Friday. He rushed for 301 yards and four touchdowns, and added a long TD pass, to lead Muskegon to an impressive 49-17 victory over Grand Rapids Christian in a Division 1 district championship game at Hackley Stadium.

The Big Reds improved to 11-0 on the season, and will take on Cedar Springs next Friday night at Grand Haven High school in a state quarterfinal matchup.

The victory was extra sweet for Martinez, who was on the losing end of a district title game last season, when he was the quarterback for Muskegon Catholic.

“It feels good because I feel like I got a second chance, and a chance to improve my resilience and things like that,” he said after the game. “Now I’m moving on and I’m very grateful.”

“It means toughness, and that we have kids who are devoted to success,” Fairfield said. “These kids work long days in the classroom and then come out to practice. These young men started back on August 6, and we go on Sundays too, so our kids work six days a week.”

The Big Red defense displayed a lot of resilience on Friday night, after it surrendered a touchdown on a 91-yard, five play drive to start the game.

Eagles quarterback Eason Hardouin found John Holmes on an 11-yard touchdown pass to give Grand Rapids Christian a 7-0 lead only 1:46 into the game.

But that turned out to be the lone score that the Big Red defense gave up in the first half.

Meanwhile the Muskegon offense answered quickly, scoring on its first possession when Martinez punched in a four-yard run to tie the game at 7-7 with 8:23 left in the first.

Martinez scored his second touchdown on a 10-yard run with 1:11 left in the first quarter, giving Muskegon a 14-7 lead.

The Big Reds extended the lead to 21-7 with 3:34 left in the second quarter when Jeremiah Lockhart scored on a six-yard run.

Martinez continued his big night right away in the second half when he took the first snap from scrimmage 72 yards to give Muskegon a 28-7 lead.

Grand Rapids Christian got seven points back when Thad Gamble scored on five-yard run to make the score 28-14 with 6:55 left in the third quarter.

After an Isaih Moore interception gave Muskegon possession, Martinez found Quenten Reynolds for a 49-yard touchdown pass to put the Big Reds up 41-14 with 3:46 left in the third.

A Dayne Weldy field goal from 25 yards out gave the Eagles their final points of the game early in the fourth quarter.

The final score of the night came on a 35-yard touchdown run by Lockhart.

“It’s always a good feeling,” said Martinez about the holes his offensive line opened up for him and his fellow backs. “All we have to do is plant our feet and go. We’re hard to stop because of them.” 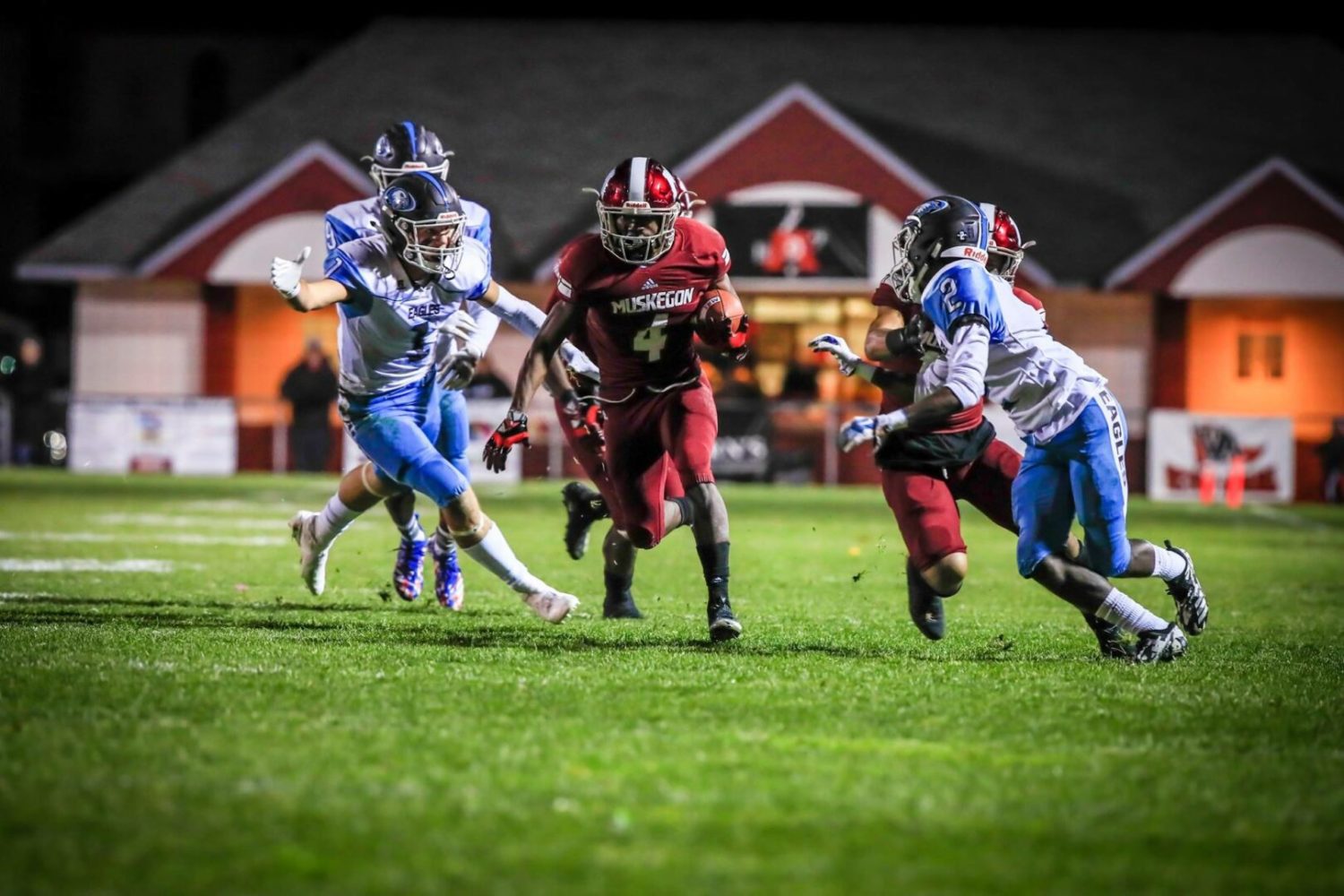 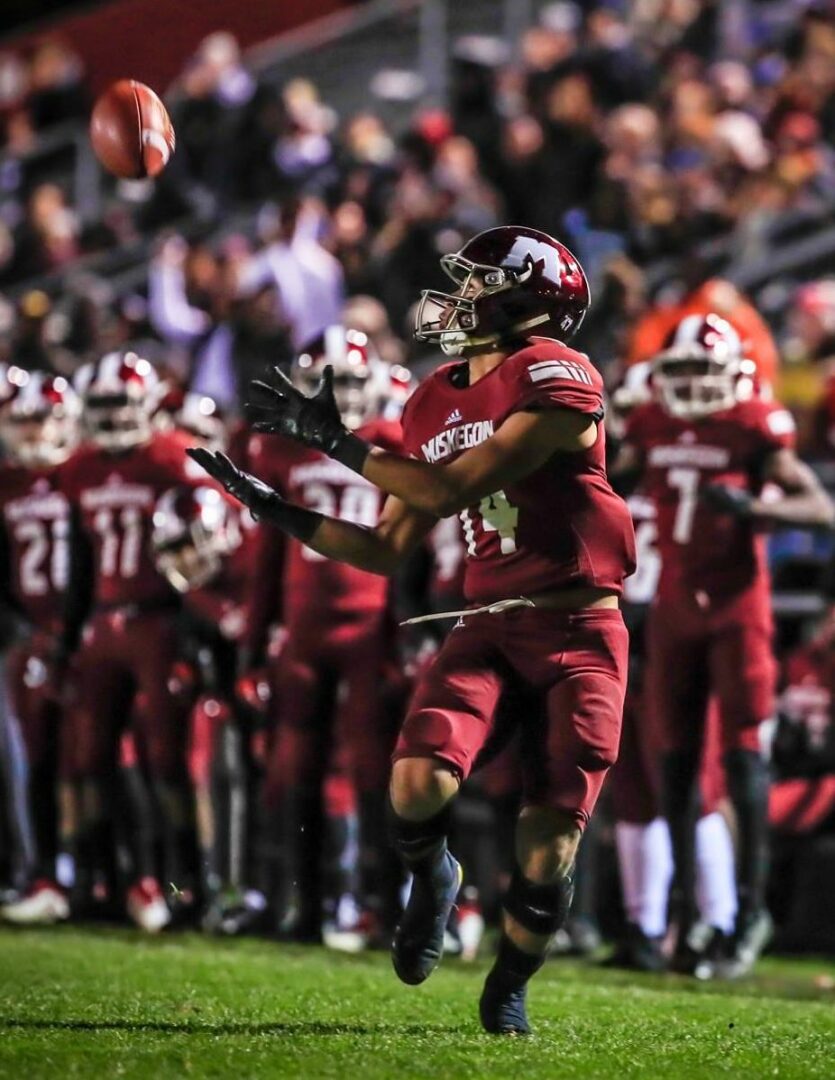 Quentin Reynolds looks back to the make the TD reception for Muskegon. Photo/Tim Reilly 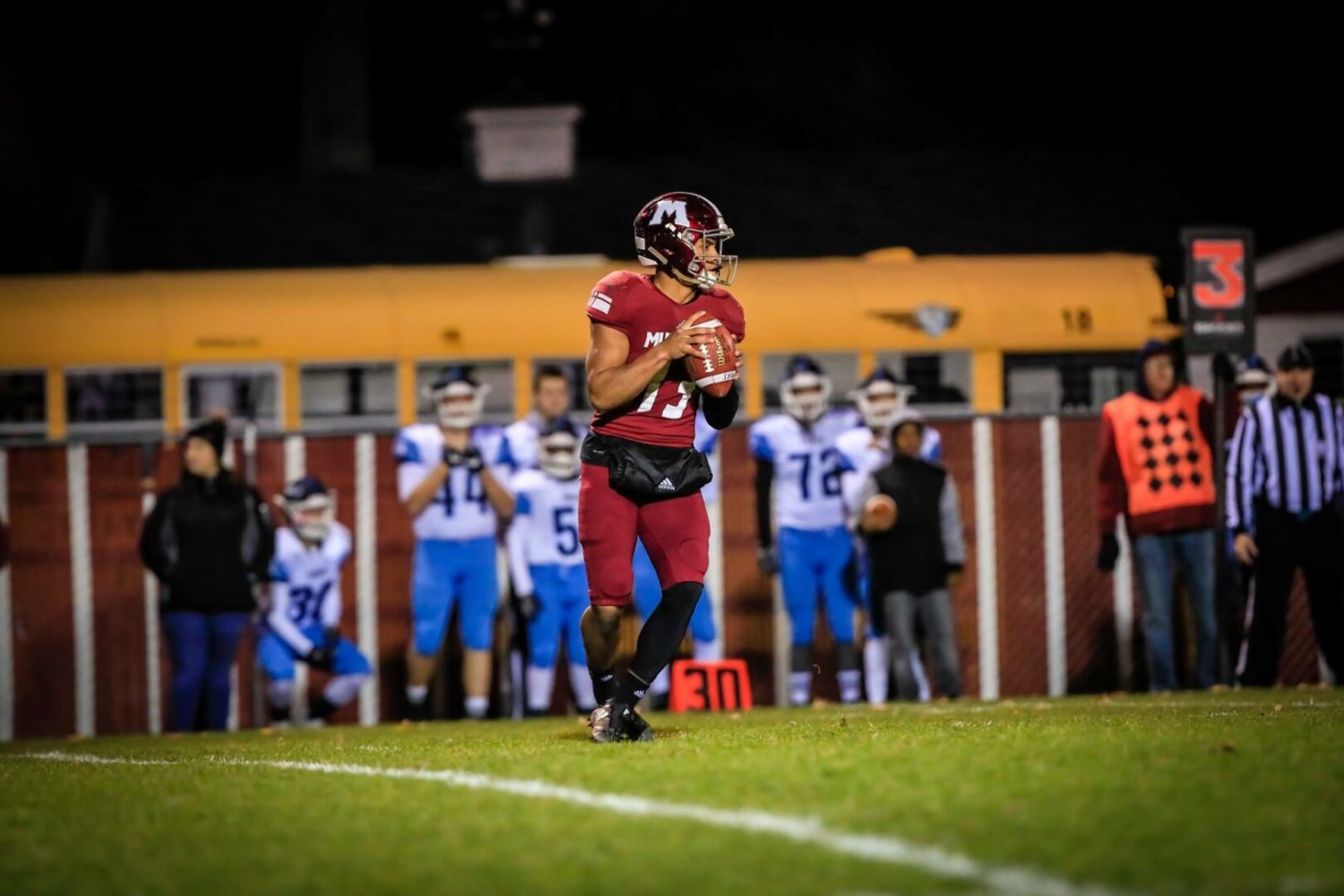 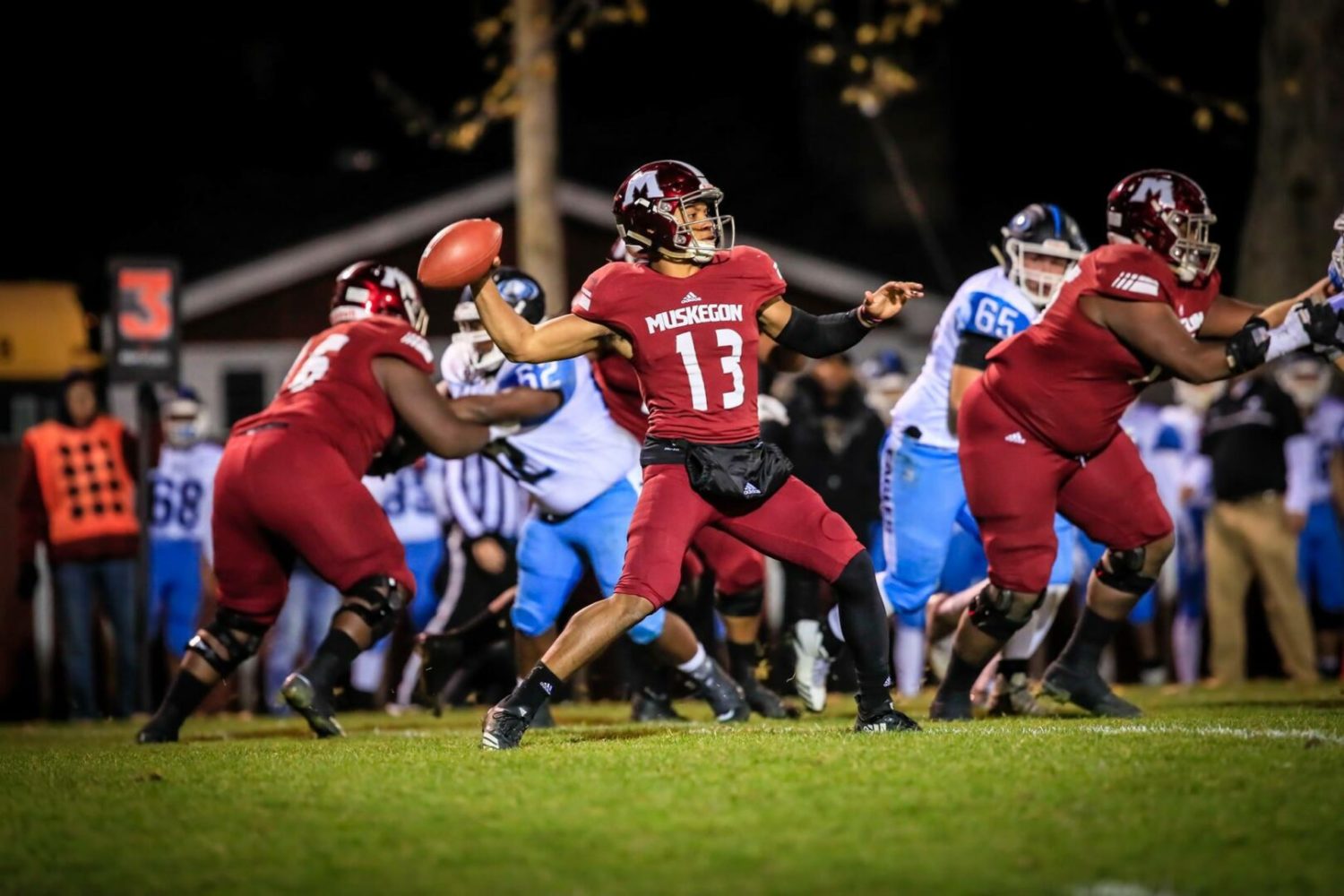 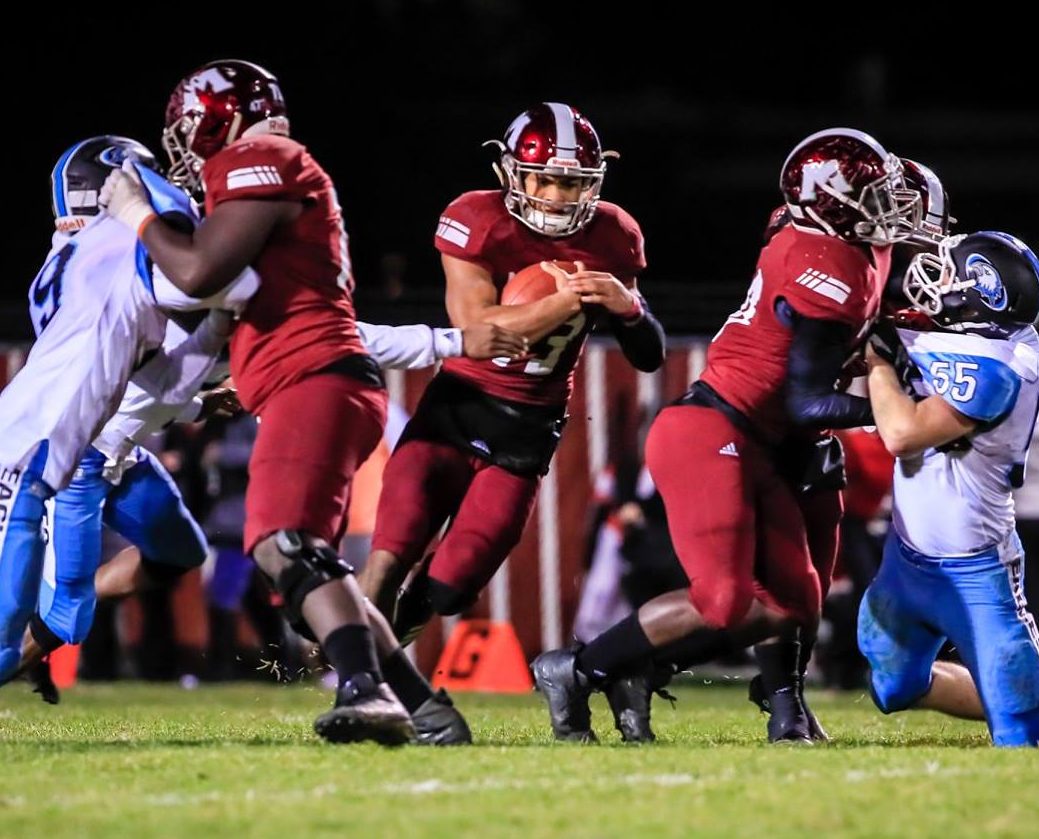 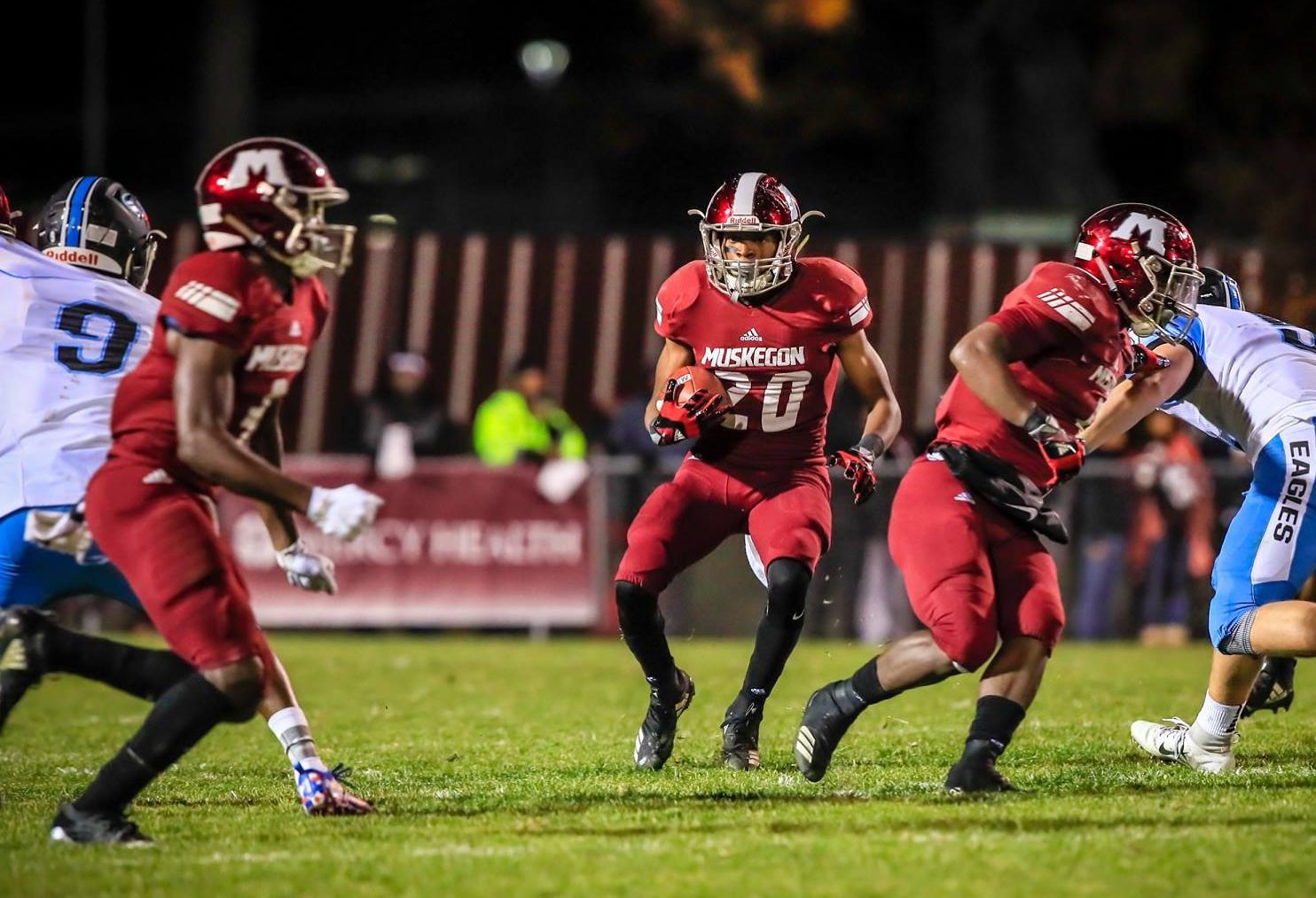 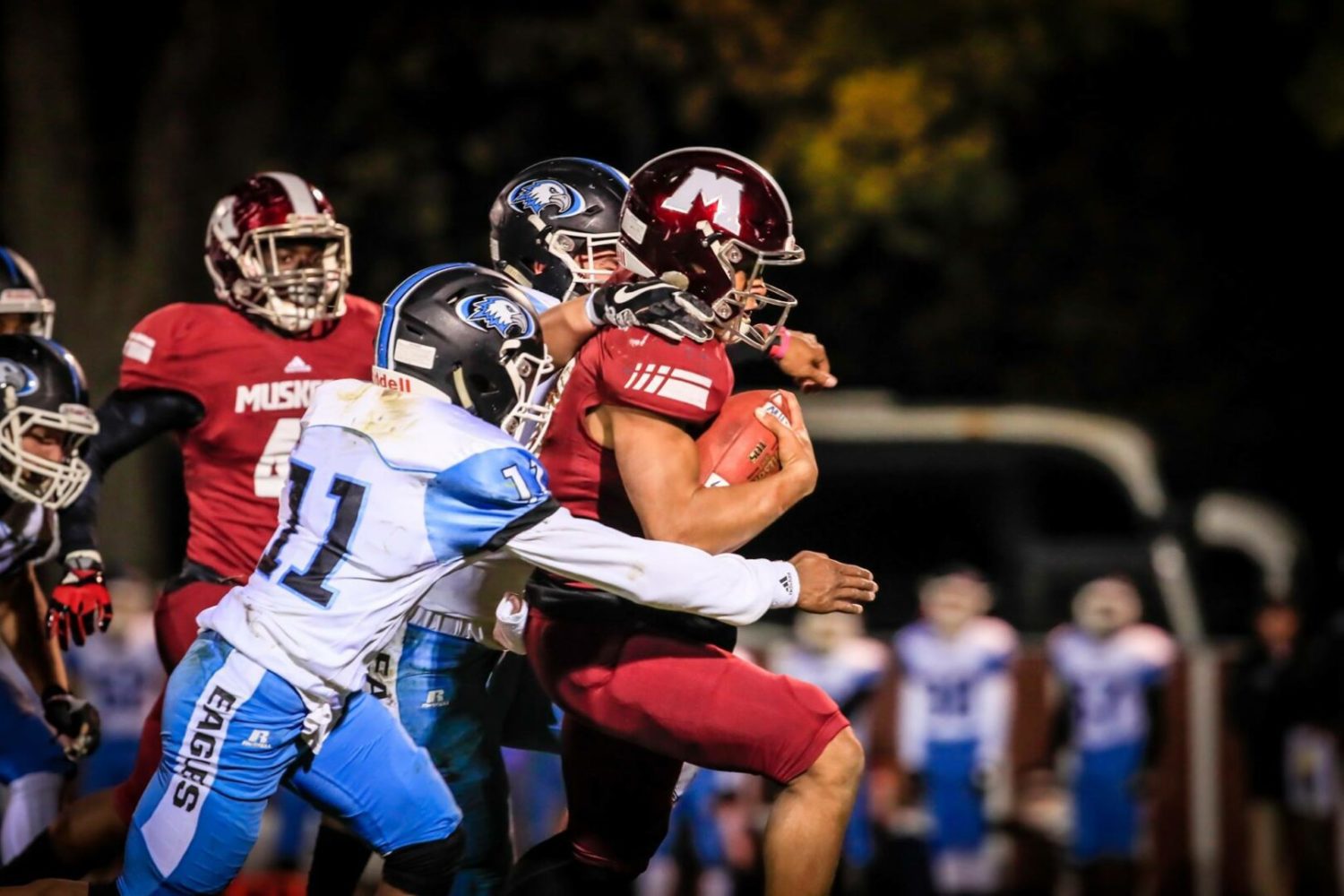 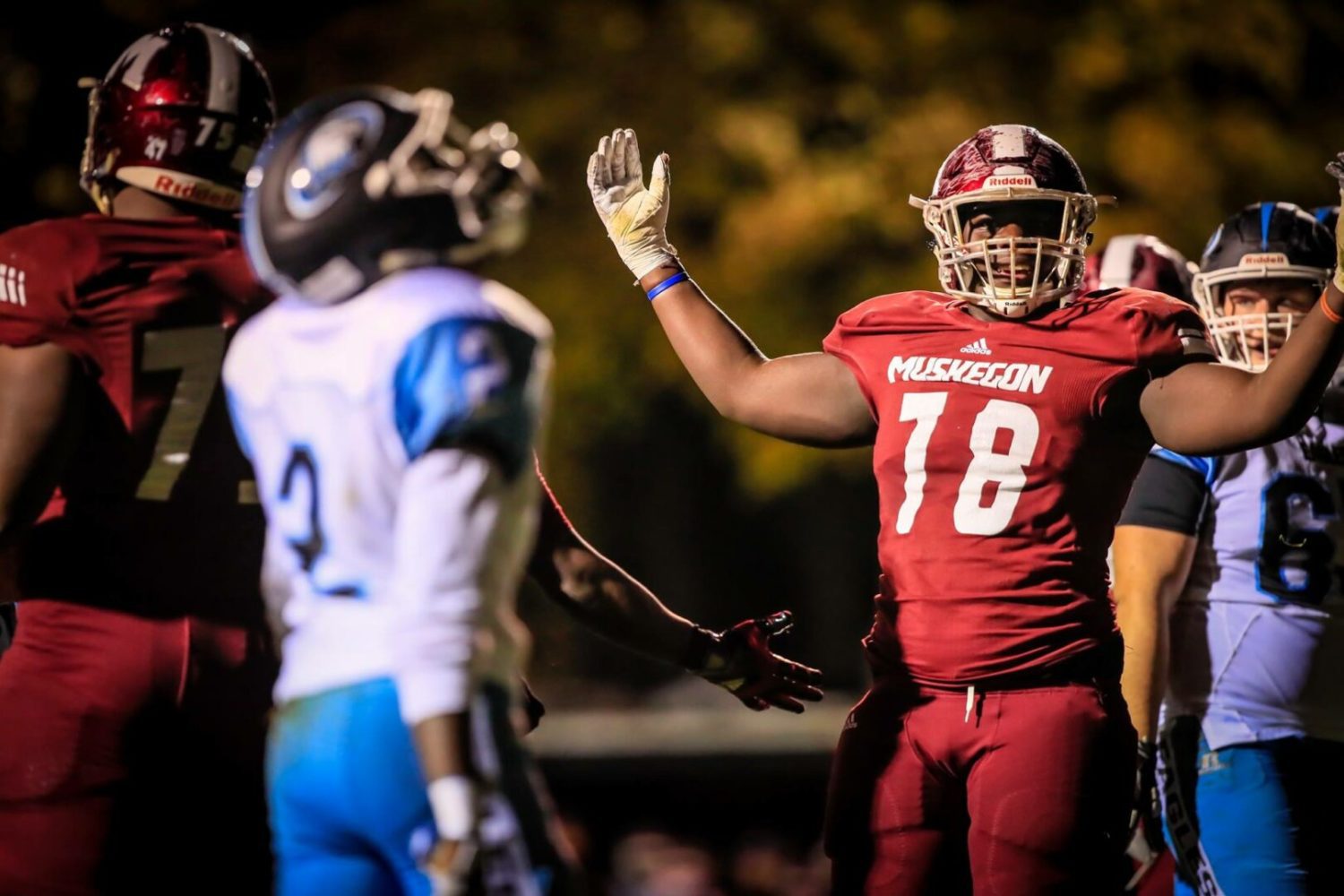 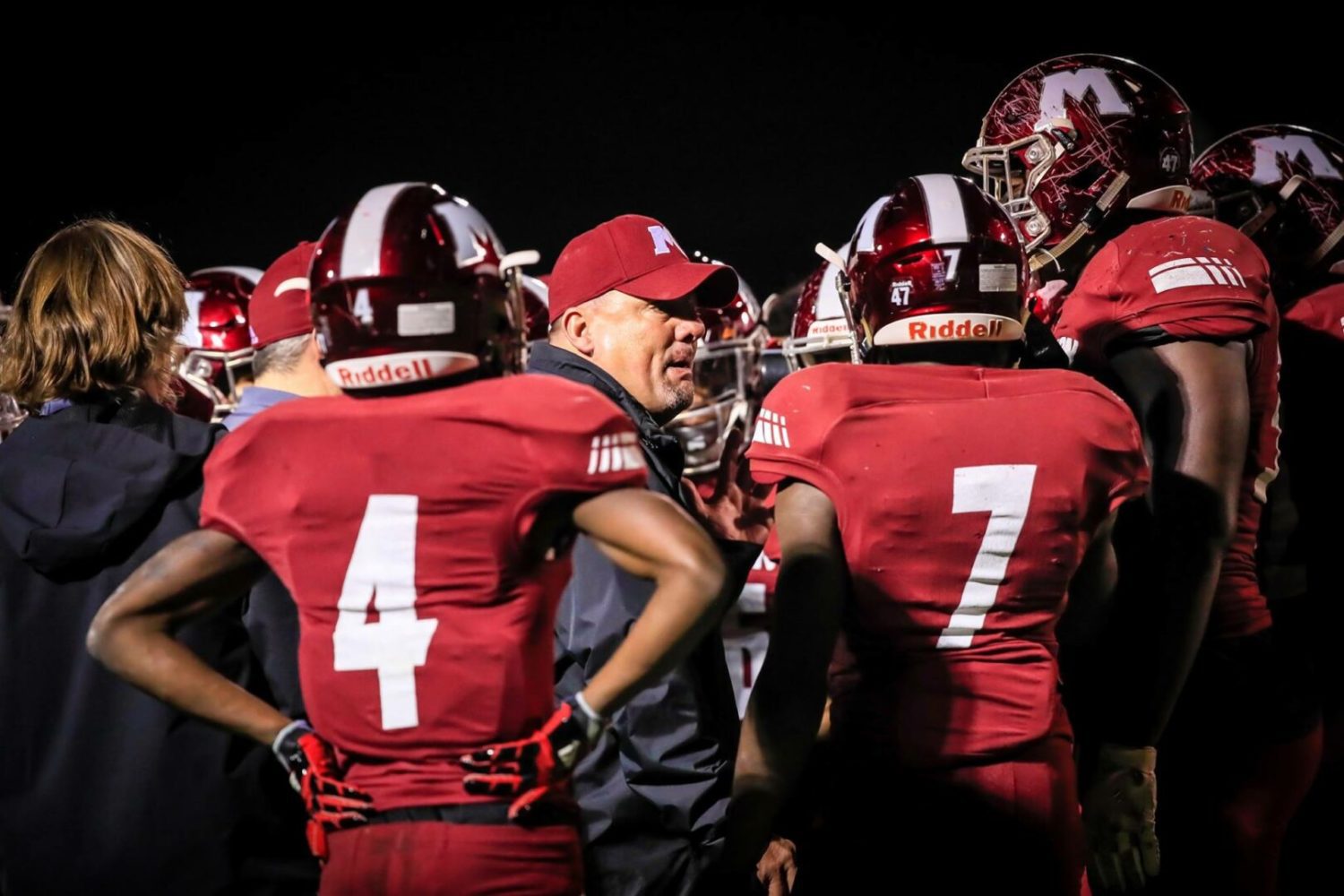 Coach Shane Fairfield talks with his Big Reds during a timeout. Photo/Tim Reilly 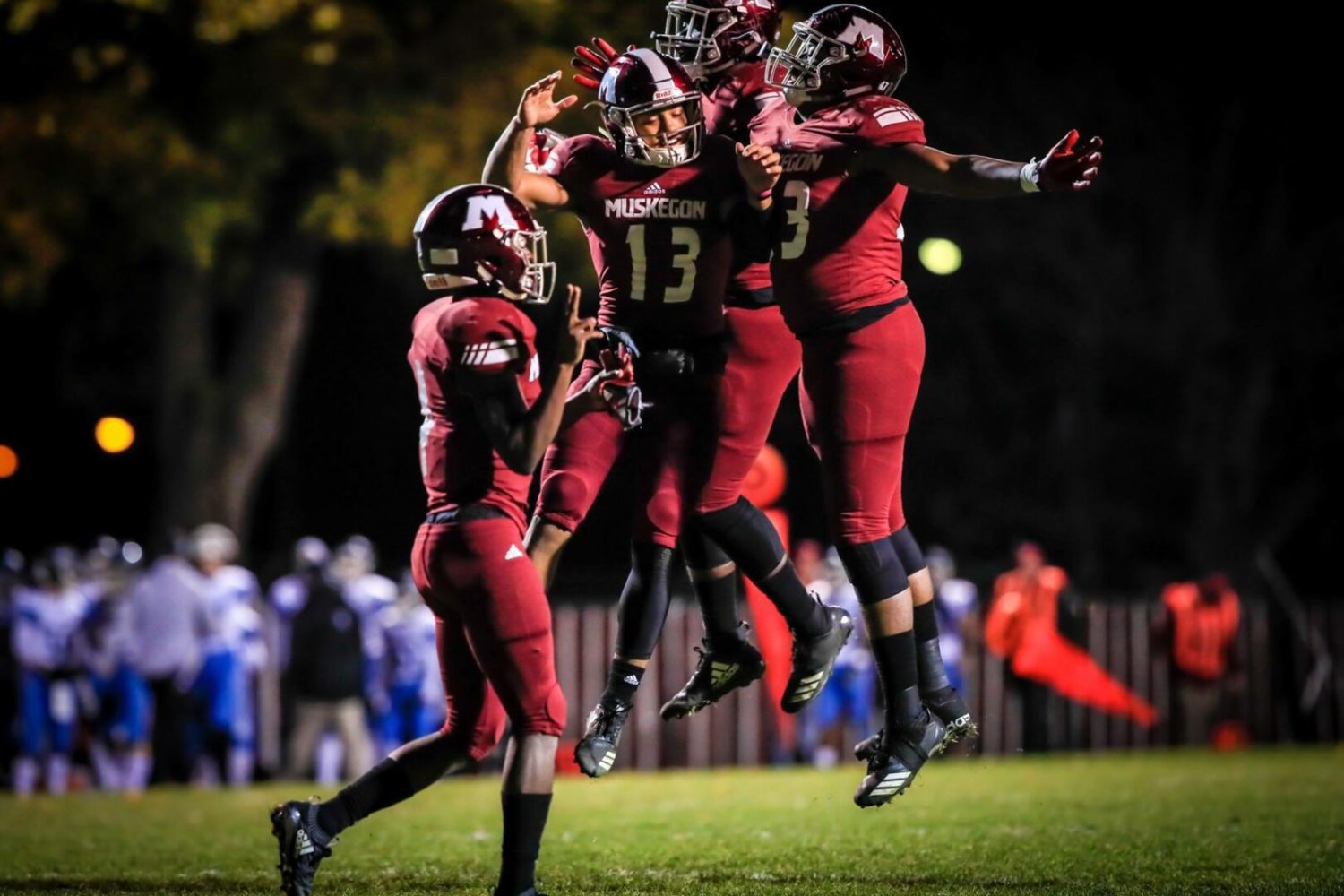 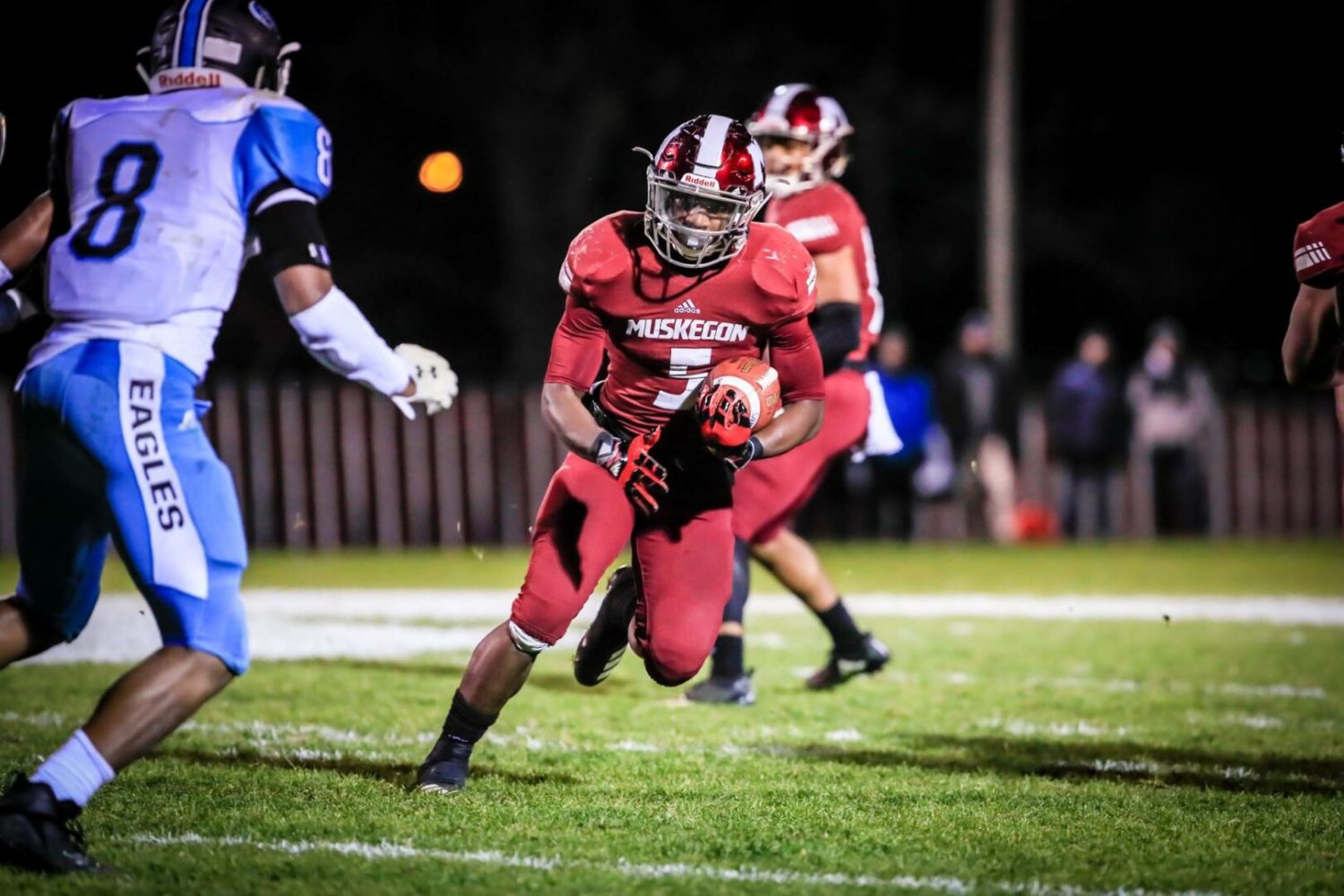 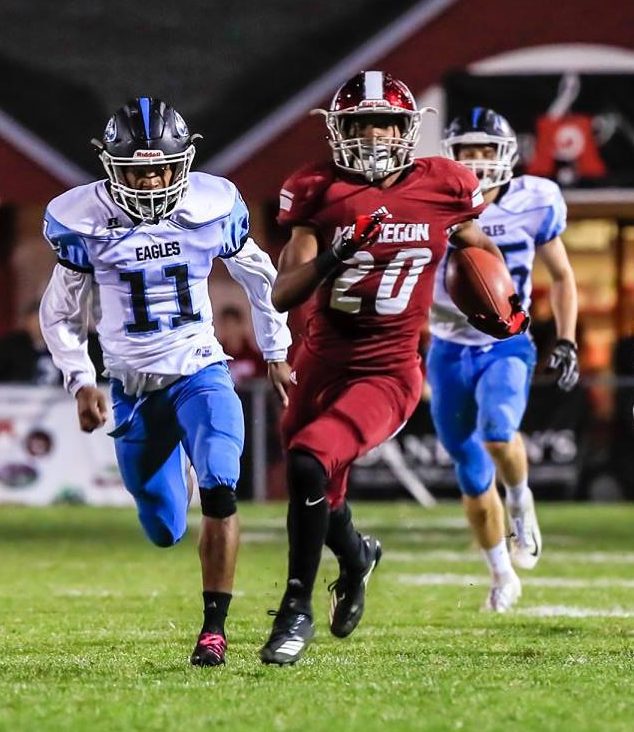