MUSKEGON – Facing a familiar O-K Black Conference foe for the second time in a month,

the Mona Shores football team played much differently, at least on the

defensive side of the ball.

In Week 7 of the regular season, the Sailors struggled to slow down the Jenison offense, and had to hold on for a 49-42 victory.

But Friday night in a District 2 district championship game, the host Sailors held the Wildcats to 175 total yards and rolled to an easy 49-10 win.

Mona Shores, which claimed its second district title in school history, improves to 10-1 and will host Portage Northern next week in the regional finals.

The defense was tested right away when Mona Shores fumbled the opening kickoff, setting Jenison up at the Sailors’ 30-yard line.

The Wildcats picked up 18 yards before settling for a 32-yard field goal from Juan Martinez for a 3-0 lead three minutes into the game.

Mona Shores responded with an eight-play drive, ending with a 35-yard touchdown run from Ke’Sean Sandifer to take a 7-3 lead.

On the first play of the second quarter, the Sailors’ Sincere Dent rumbled right up the middle of the Jenison defense for a five-yard score, and Mona Shores had a 14-3 lead just four seconds into the quarter.

The Wildcats couldn’t respond, going three-and-out on the ensuing drive and giving the ball back to Mona Shores. The Sailors then drove 62 yards in nine plays, and took a 21-3 lead when Dent scored from 19 yards out.

“They were physical and did a great job of going after it up front,” Jenison coach Rob Zeitman said. “Shores came in with a great game plan and they executed it. We just couldn’t get into a rhythm offensively.”

Jenison put together an effective drive on the next possession, using 10 plays to reach the Sailors’ 24- yard line. But a penalty on fourth down forced a punt, which the Wildcats faked and gained no yardage.

Three plays later, Tre’Shawn Hatcher scored from 45 yards out and Shores had a 28-3 halftime lead.

The Wildcats started the second half much like the end of the first half, with a 10-play drive that ended with no points when quarterback Kyle Nott was sacked by Josh Hill on a fourth down play at the Sailors’ 20-yard line.

“Our whole coaching staff had a plan on how to play (Jenison) differently than the last time,” Sailors linebacker Jacob Wahlberg said. “And it paid off, big time.”

The Mona Shores offense struck quickly with a 3-play scoring drive, ending in a 45-yard TD pass from quarterback Caden Broersma to Keondre Pierce for a 35-3 lead with 8:07 left in the third quarter.

After a James Gilbert interception, Broersma scored on an eight-yard run to give the Sailors a 42-3 lead.

Hatcher scored on a 3-yard run with 11:06 left in the fourth quarter to make the score 49-3, before Jenison finished off the scoring with 5:20 left in the game.

“I was worried to death all week (about this game),” Koziak said. “But I’m proud of the way our team played. It was one of the best games we’ve played. I’m just so happy we get to play another week.”

Mona Shores finished with 452 total yards, with 382 coming on the ground.

Broersma finished with 154 rushing yards on 12 attempts, Hatcher had 82 yards on five carries, and Sandifer added 56 yards on four carries. Broersma was also 2 of 3 passing for 70 yards. 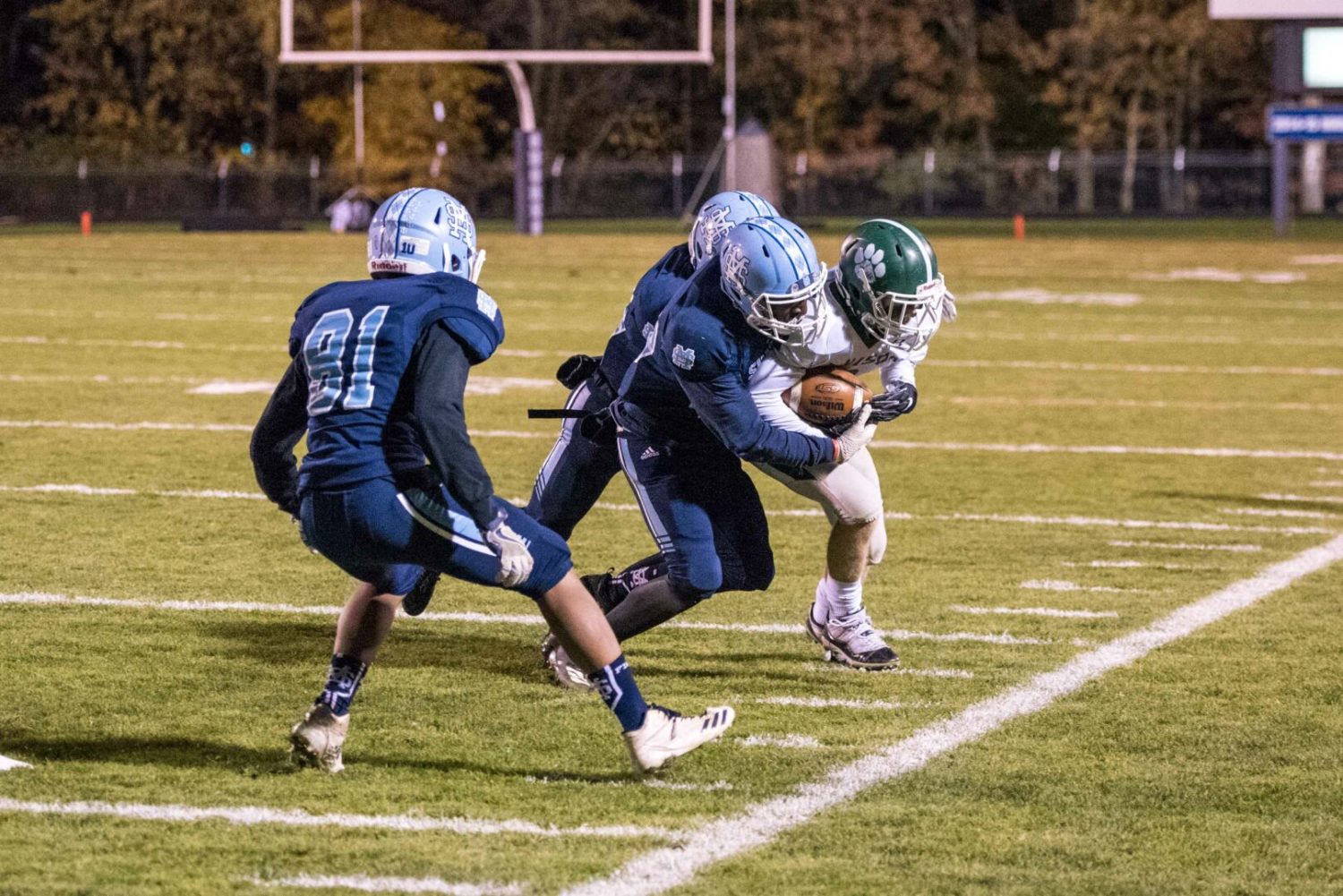 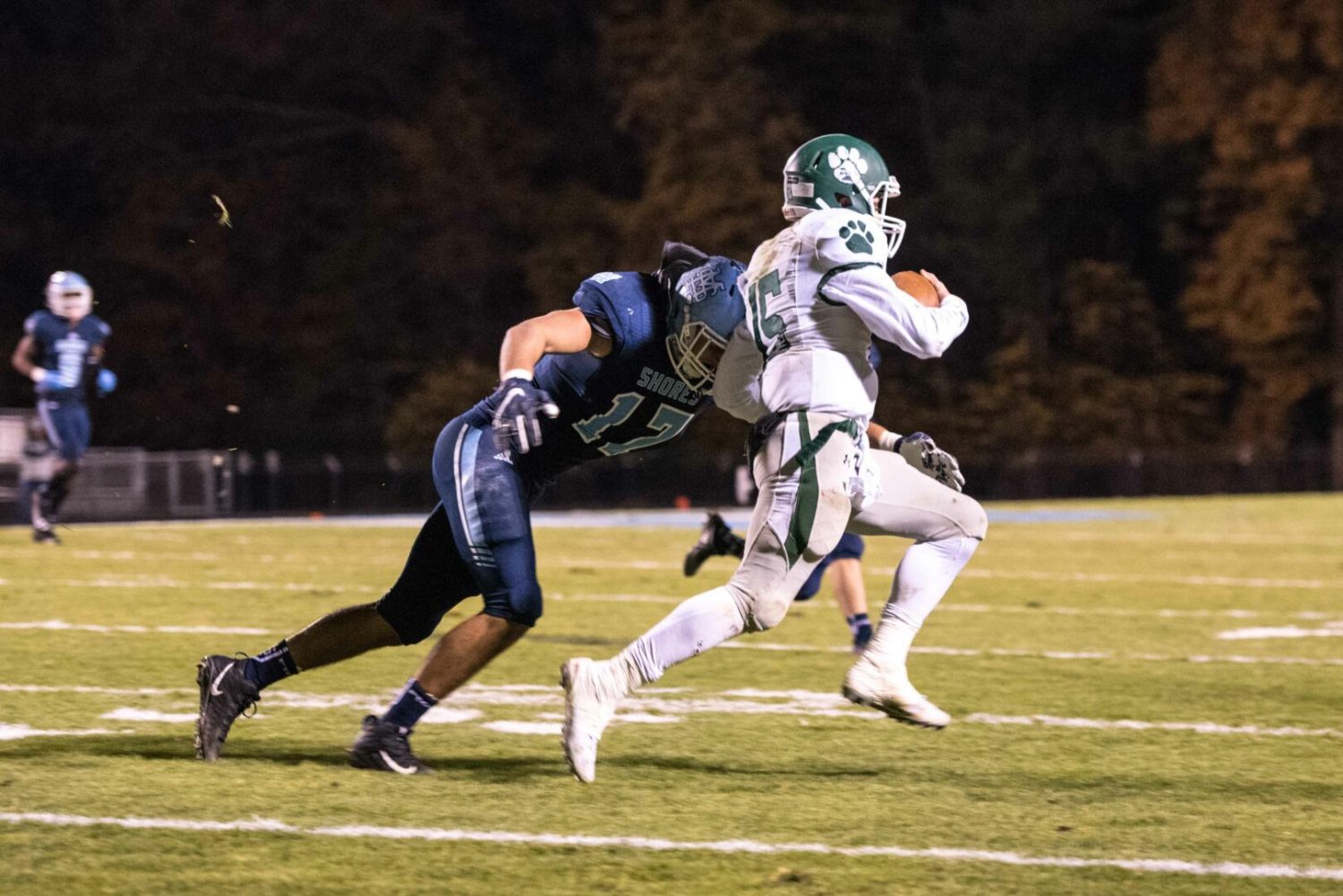 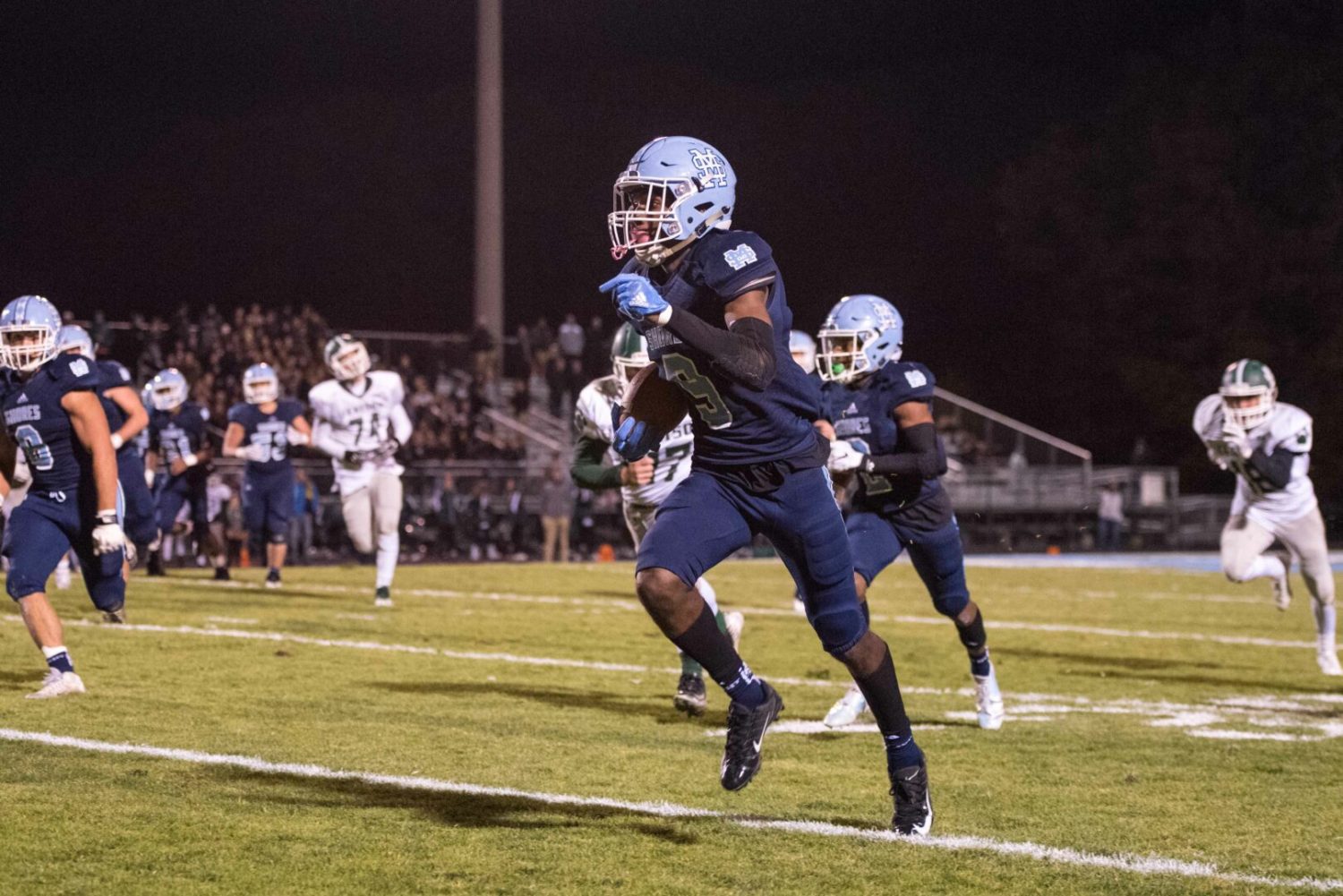 James Gilbert catches a pass in the flat and takes for a big gain down to the 5 yard line. (photo/Eric Sturr) 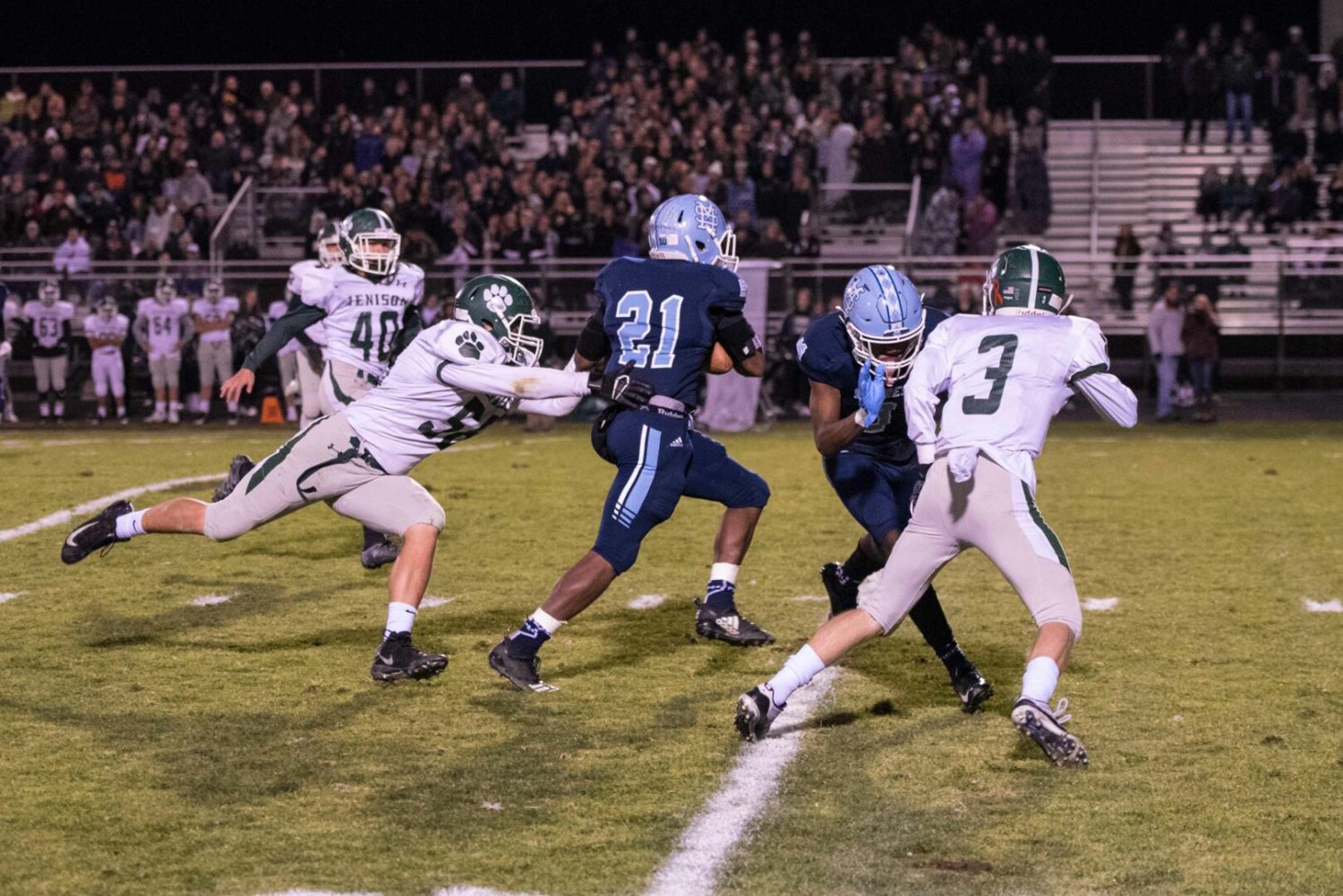 Tre’shawn Hatcher (21) weaves through the Jenison secondary on his way to a Sailor touchdown. (photo/Eric Sturr) 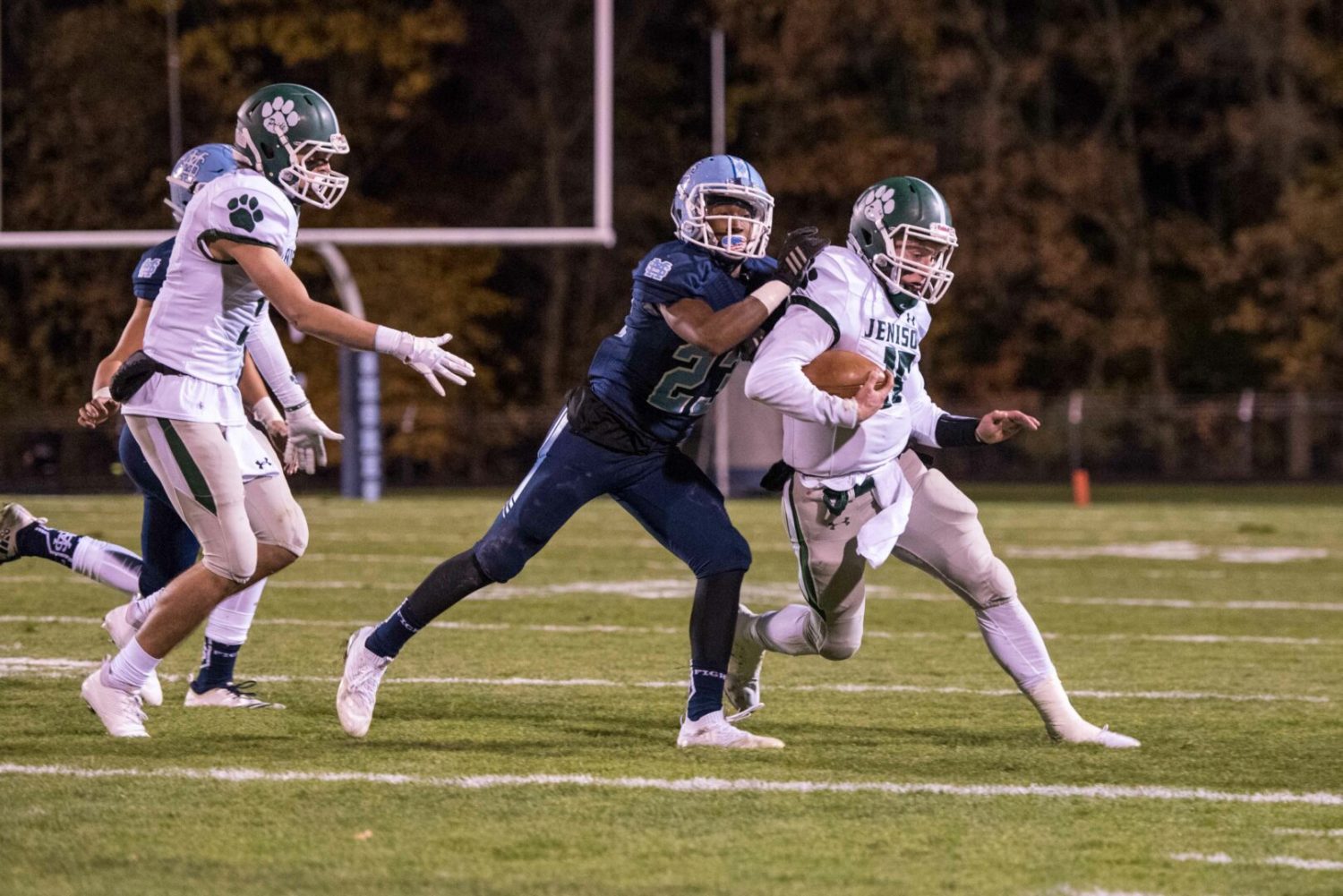