By Andrew Johnson
LocalSportsJournal.com
NORTON SHORES – When a high school football team makes it to the state finals for the first time, expectations for the program change.

The Mona Shores Sailors have experienced that since 2014, when they made their first-ever trip to the finals and fell 44-8 to traditional power Warren De

La Salle.
While that loss was pretty one-sided, the Sailors had clearly moved to a new level after decades of futility, and their fans and observers around the state were wondering when they would make another appearance at Detroit’s Ford Field.
As it turns out, that encore performance will come on Friday in the Division 2 state championship game at 1 p.m. To make things even more intriguing, the Sailors will get a chance at revenge, because they are facing De La Salle again with all the marbles on the line. 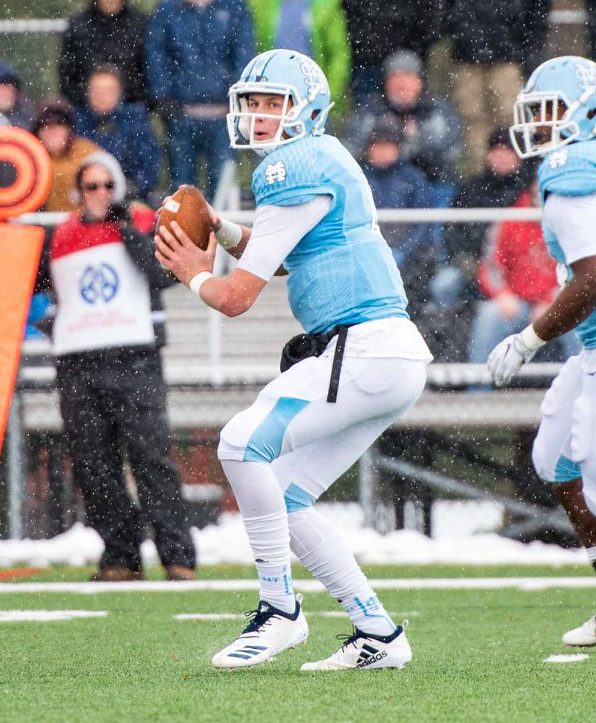 Quarterback Caden Broersma gets ready to make a pass to to the sideline. Photo/Eric Sturr

De La Salle, 11-2, is the defending Division 2 state champion. The Pilots reached the finals again by defeating Warren Mott (26-10), Oak Park (25-7), Port Huron Northern (21-3) and Birmingham Groves (28-0) in the playoffs.
While the opponent will be the same, Mona Shores head coach Matt Koziak doesn’t view the big game as a grudge match.
“I don’t think you can really learn anything from the (2014) game other than watching film,” Koziak said. “Obviously these are different kids, and they have a different staff. In the end, once the ball is kicked and you get a couple of snaps into it, it will turn into just another football game.”
But the significance of this opportunity is not lost on Koziak.
In 2011 he took over a program that had never qualified for the state playoffs, much less entertained any thoughts of winning a state championship.
Koziak took the Sailors to the playoffs for the first time in 2013, and they have made it back in all but one season (2016) since then. They advanced to the district finals in 2015, and again last year.
Now they are back in the big dance, and the Sailors would love to cash in this time. Mona Shores reached the finals by beating Forest Hills Central (34-28), Jenison (49-10), Portage Northern (58-28) and Midland (49-28) in the playoffs.
“It would be huge,” Koziak said about winning a state title. “When we got here it had been 50 years and no playoffs. In 2012 we made the playoffs, and 2014 was incredible.
“To bring a state title home to Shores would be great for me as a graduate of Shores. It would be great for the players of our past, as well as the current ones, to have that. It would be unbelievable for our community and our kids.” 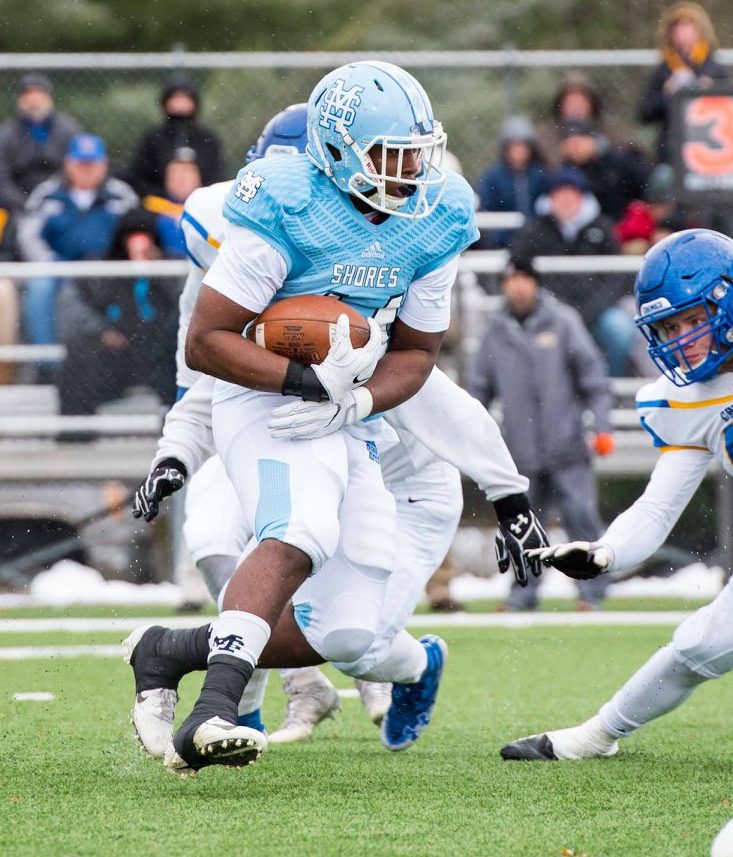 Mona Shores running back Sincere Dent rushes from the backfield during the semifinals. Photo/Eric Sturr

The return to the finals is actually coming a year later than many people expected. The 2017 Sailors were loaded with talent, and widely viewed as a state contender, but the season ended with a heartbreaking 28-21 loss to Grand Rapids Forest Hills Central in the district finals.
“We really thought we had an opportunity last year,” the coach said. “We thought we should’ve beaten Forest Hills Central, but we didn’t play as well as we could’ve.”
Koziak thinks that loss has been a motivator this year.
“With our senior class, it was a huge motivator,” the coach said. “I did think we’d eventually be back (in the finals), and I think our kids worked hard enough to set it as a goal this season.”
The Sailors, who are 12-1, with their lone loss coming against powerful Muskegon, will bring a multi-threat offensive attack into the game.
The ground game is focused around senior running back Sincere Dent, who has totaled 1,228 yards and 24 touchdowns this season, even while battling injuries.
Koziak said Dent and a lot of other injured players are finally healthy, just when it matters the most.
“We’ve gotten healthy at the right time,” he said. “During the regular season we lost guys, and we’ve gotten them back now. It has everything to do with helping us catch our stride.”
Mona Shores can move the ball through the air, as well. Junior quarterback Caden Broersma, in his first year as the starter, has thrown for 1,726 yards and 16 touchdowns, with only one interception. His top target is receiver James Gilbert, who has 56 receptions for 1,307 yards and 12 touchdowns. 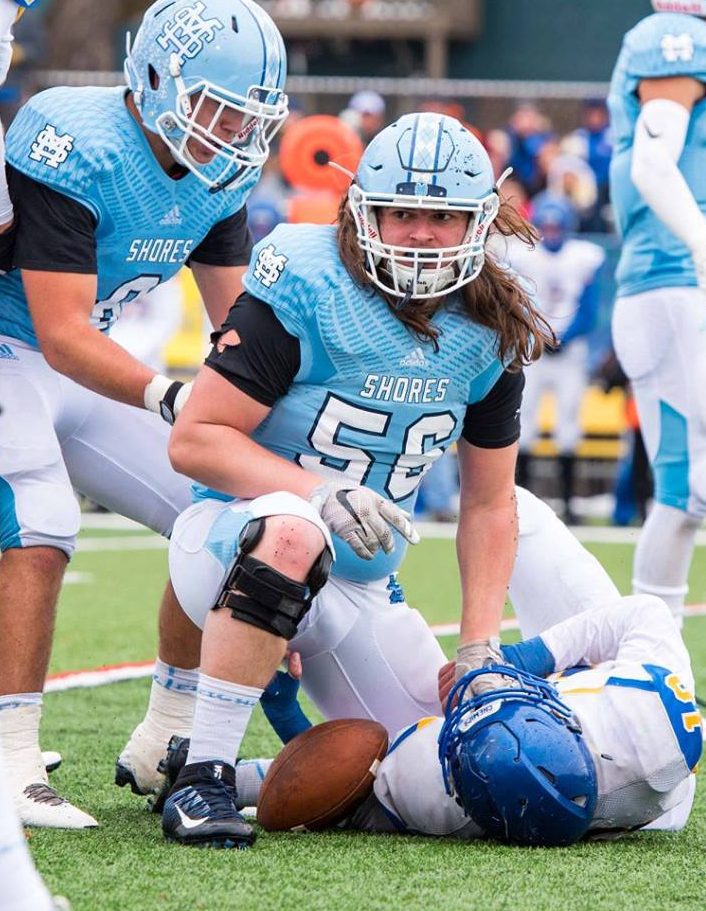 Colt Stoudt looks up at the sideline after making the stop for Mona Shores. Photo/Eric Sturr

Broersma is also a threat on the ground, with 985 rushing yards and 16 touchdowns.
“He’s been great,” said Koziak about Broersma. “He’s incredible, not only as a game manager, but when asked to make huge plays. He’s got like a 73 percent completion rate and ran for another 1000 yards. He’s been outstanding.”
A big key for the Sailors on Friday will be getting off to a good start. Warren De La Salle has outscored opponents 222-56 in the first half this season.
“They get up on you and rely on their defense the rest of the game,” said Koziak about the Pilots. “We have to stop them or match them early. We can’t allow them to get out front and have their defense keep us off the board.”
While the Pilots rely heavily on senior running backs Evan Vaillancourt and Nolan Schultz, who have combined for a total of 21 touchdowns this season, it’s their defense that really stands out.
The Pilots have intercepted 11 passes this season and only allowed 113 points, an average of 8.6 points per game.
“You try to find chinks in their armor, but they don’t have a lot,” Koziak said. “You look at their points given up and they’ve been incredible. I think we have to have a balance, and can’t just rely on the run, otherwise they can load the box.”
One thing Koziak knows, after watching De La Salle play Muskegon earlier this season, is that the Pilots will be physical.
“I was at that game,” said Koziak about the Week 1 matchup, which Muskegon won. “The first thing I thought about was how physical it was. Just the way the two teams pounded each other, and De La Salle was able to match Muskegon at first.”