trip to Ford Field.
But the Sailors rebounded from early mistakes and a 14-7 deficit to run away from Midland and earn a 49-28 win at Grand Ledge High School and their first berth in a state championship game since 2014.
“Our kids have been resilient all year,” Sailor head coach Matt Koziak said. “These kids refuse to lose. I say it all the time, we get to spend another week together. Obviously it’s great to go to Ford Field, but it’s great to spend another week with these seniors and be able to coach them.”

On fourth and 10, James Gilbert makes the catch over the middle for Mona Shores, breaks two tackles and takes it 26 yards for a touchdown. Photo/Eric Sturr

Mona Shores (12-1) advances to the state final game next Friday at 1 p.m. against Warren De La Salle at Ford Field in Detroit. It will be a chance for revenge, because De La Salle is the team that beat the Sailors in the 2014 finals.
“It’s a short turnaround, we’ve got to correct some things from this game,” Koziak said. “It’s kind of ironic, that’s the team we played in 2014. We’ve got our hands full, but ultimately our goal was to get here to win it, and now we have an opportunity to do that.”
Senior wide receiver James Gilbert provided a major spark for the Sailors offensively, catching three downtown passes of 26, 50 and 61 yards from quarterback Caden Broersma. Gilbert had a pair of passes slip through his hands early, but shook it off to come through with a big game.
“Coach Koziak and everybody has confidence in me,” he said. “This opportunity comes once in a lifetime, we just have to keep practicing and keep grinding hard.”
Broersma had a big game, as well. The junior signal-caller totaled 291 yards and ran for two touchdowns in addition to the three passing scores.
“It’s a team effort, everybody around me,” he said. “Everybody did their job and that helped me do my job.”

Kolbe Trovinger picks up the first down on a pass from Caden Broersma. Photo/Eric Sturr

“He’s been lights out,” Koziak said of his quarterback. “He’s been like that all year long. He’s got a ton of moxy. He’s very poised.”
The Sailors struck first on an eight-yard score by Broersma, which was set up by a 68-yard run by Sincere Dent. The Chemics responded with a touchdown on their next drive when sophomore quarterback Al Money found Christian Gordon for a 15-yard pass to tie the game 7-7.
Broersma fumbled on the next Shores possession, but the defense stood tall and forced a three-and-out. Mona Shores lined up to punt on its next drive, but Midland rushed all 11 players and took the punter down at the 12-yard line, then took over with great field position.
Gordon punched in a one-yard touchdown a few plays later to put Midland up 14-7 just 28 seconds into the second quarter.
Gilbert scored his first touchdown on a fourth-and-10 play on the following drive, breaking multiple tackles on his way to the end zone, to tie the game 14-14.

The Sailors got the ball back with 1:26 to play in the half and took advantage. Broersma completed a pass to Gilbert, who again turned a short reception into a big play, going 50 yards for a score that gave Mona Shores a 21-14 lead with just nine seconds remaining in the half.
“I call that great coaching when you throw a five-yard route to a kid, and he takes it 60 yards or whatever,” Koziak said with a laugh. “That was big. (Gilbert) is an incredible athlete. It was a huge momentum swing.”
After a defensive stop to open the second half, the Sailors fumbled on their first play, again giving the Chemics good field position. Midland took advantage, scoring on a fourth down play to tie the score at 21-21.
The game didn’t stay tied for long. Mona Shores’ Ke’Sean Sandifer took off for a 75-yard touchdown run on the next play from scrimmage. A botched extra point left the score 27-21 with 4:41 left in the third.
That score opened the floodgates for the Sailors. Broersma found Gilbert for another score, covering 61 yards this time, then ran for a 38-yard score to make it 42-21. Tre’shawn Hatcher tacked on the final score for the Sailors with a 44-yard touchdown run with 2:25 to play.
The Chemics scored with under a minute left on a pass from Money to Tommy Johnstone to bring the final to 49-28.
Gilbert finished with 159 yards on five catches while Dent ran for 118 yards on 13 rushes.
Dent, Kolbe Trovinger, Jackson Neely, Jacob Wahlberg, Colt Stout, Josh Smith and Jay’lin Smith came up with big plays for the Sailor defense throughout the game. 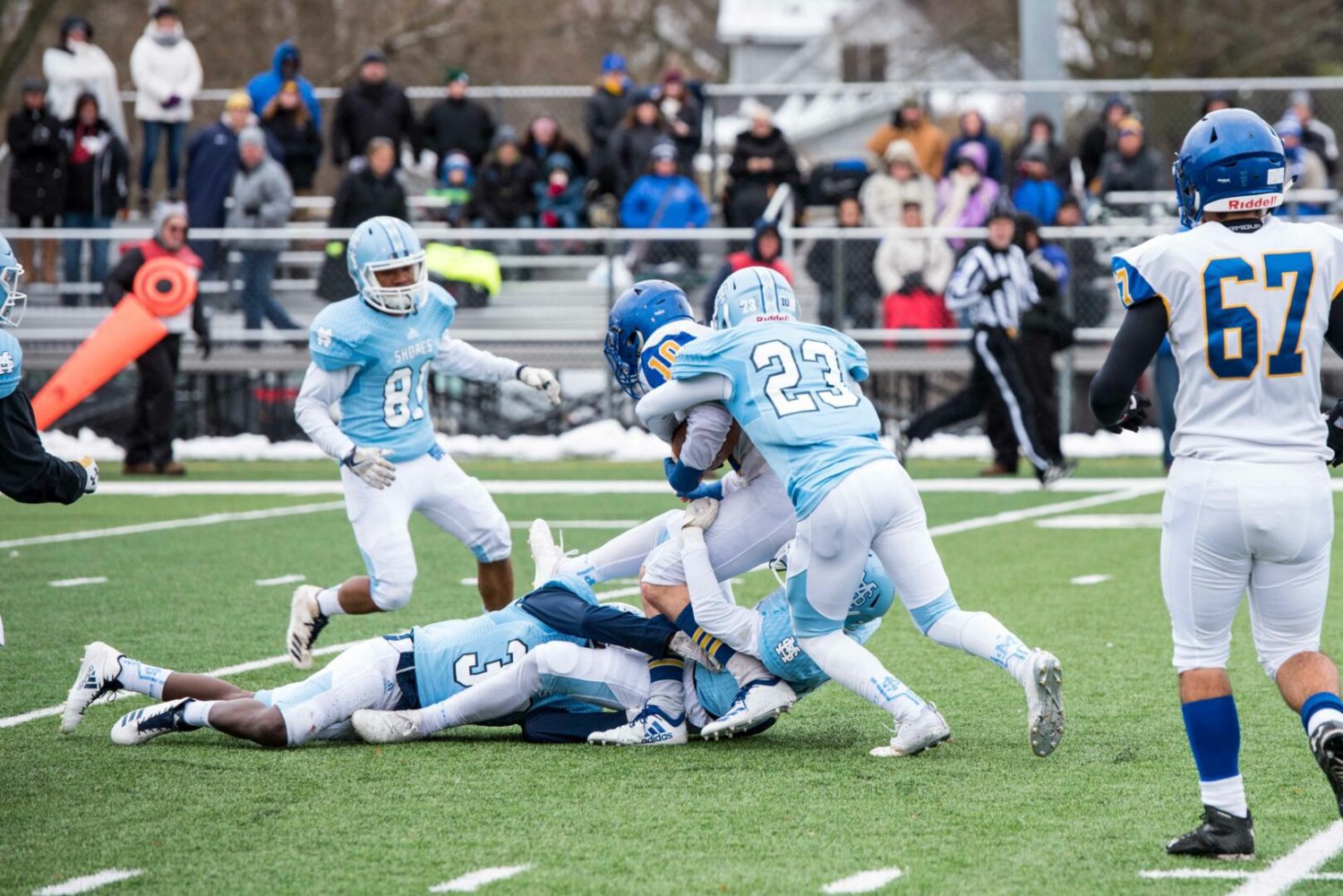 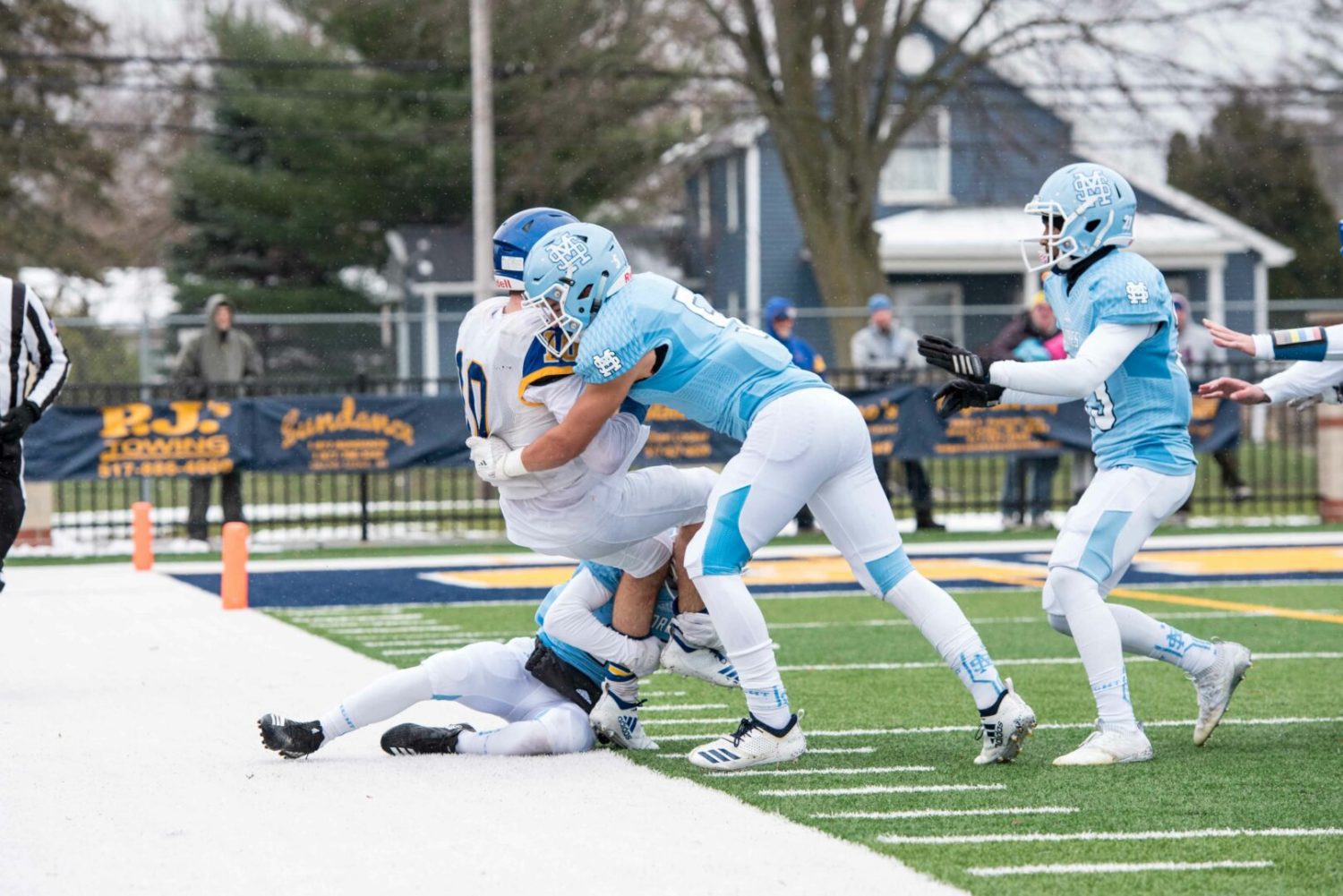 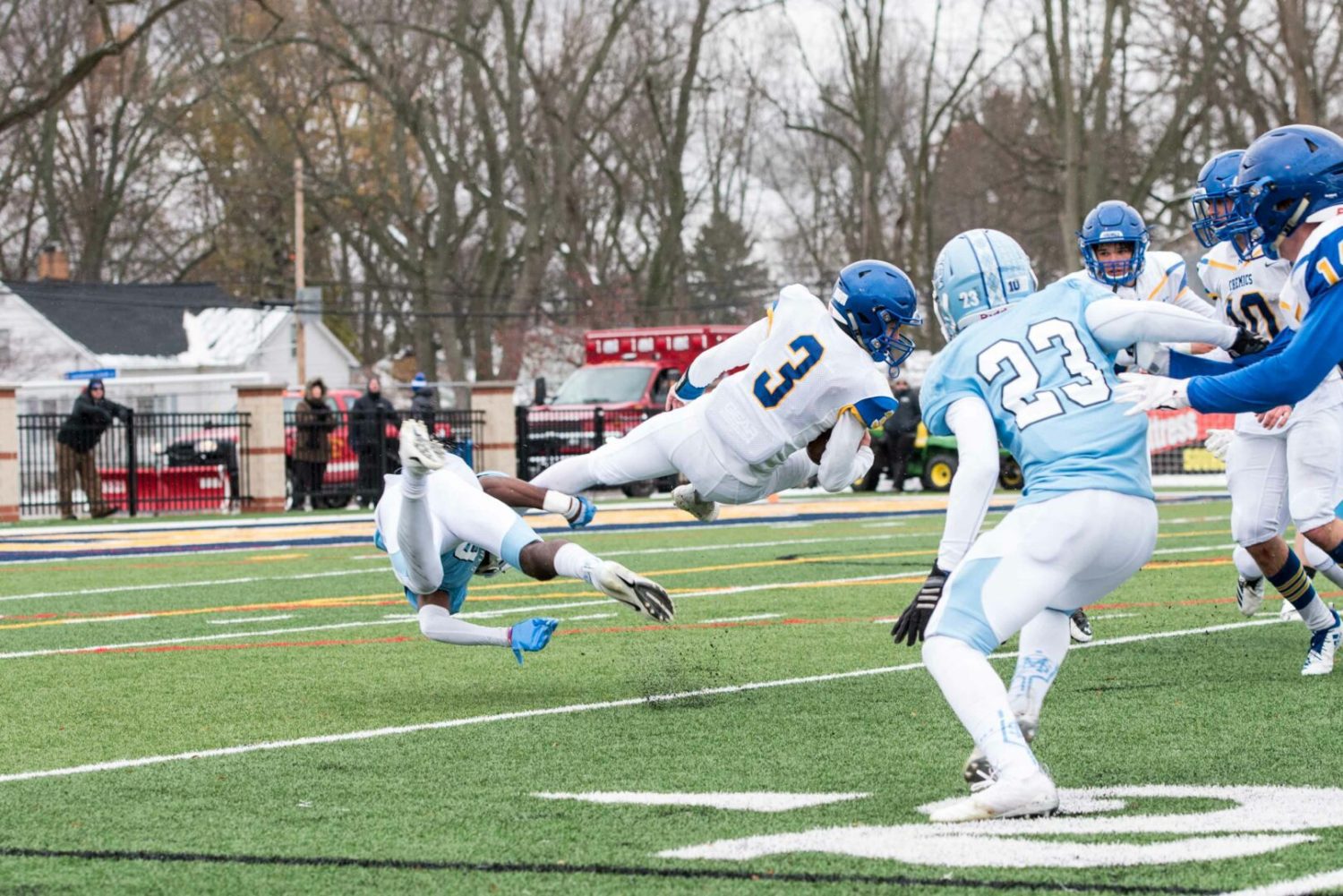 James Gilbert flies into the backfield and makes the tackle for a loss on Midland’s Tommy Johnstone. (photo/Eric Sturr) 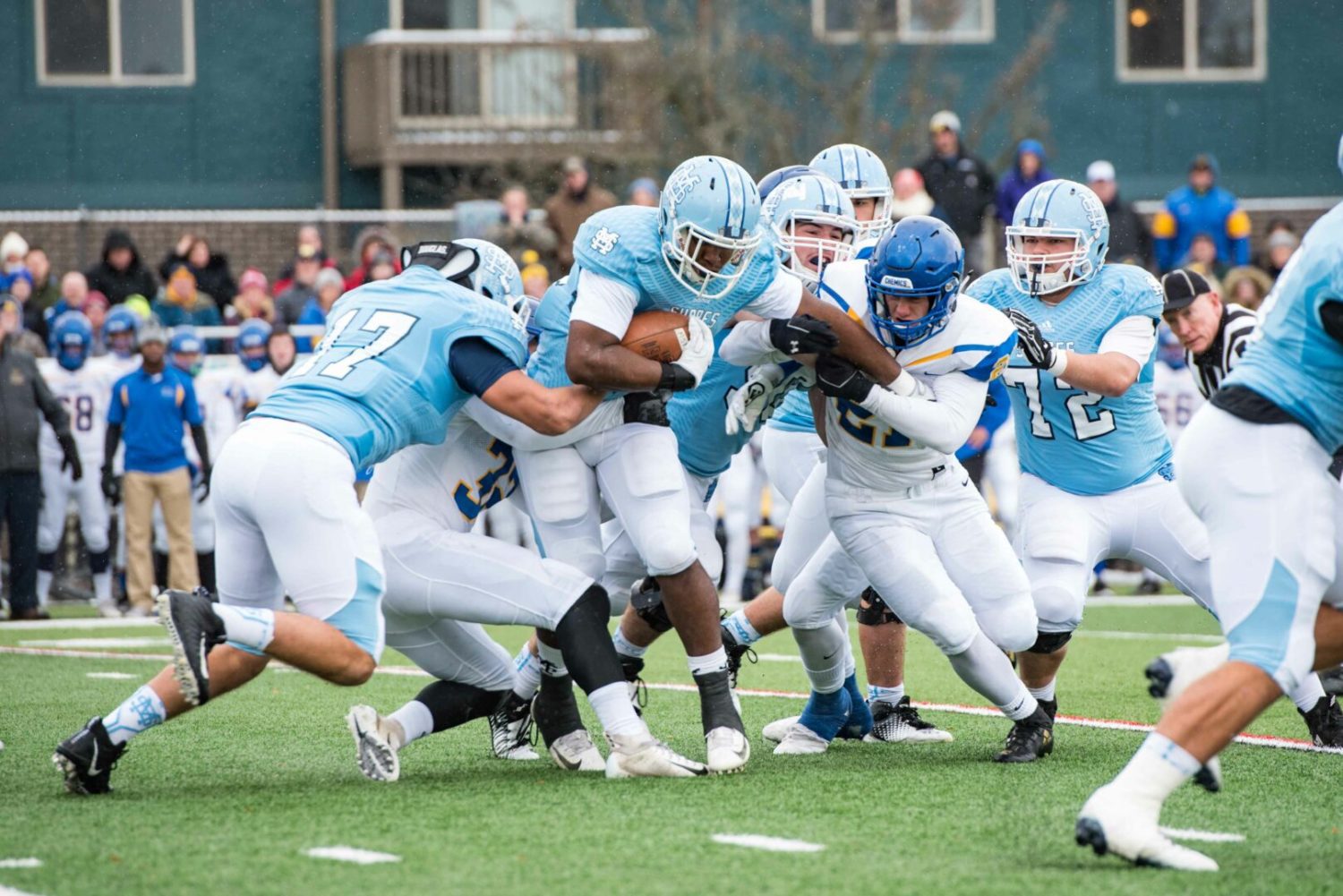 Sincere Dent looks wrapped up, but he breaks away and takes the ball to inside the Midland 10-yard line. (photo/Eric Sturr) 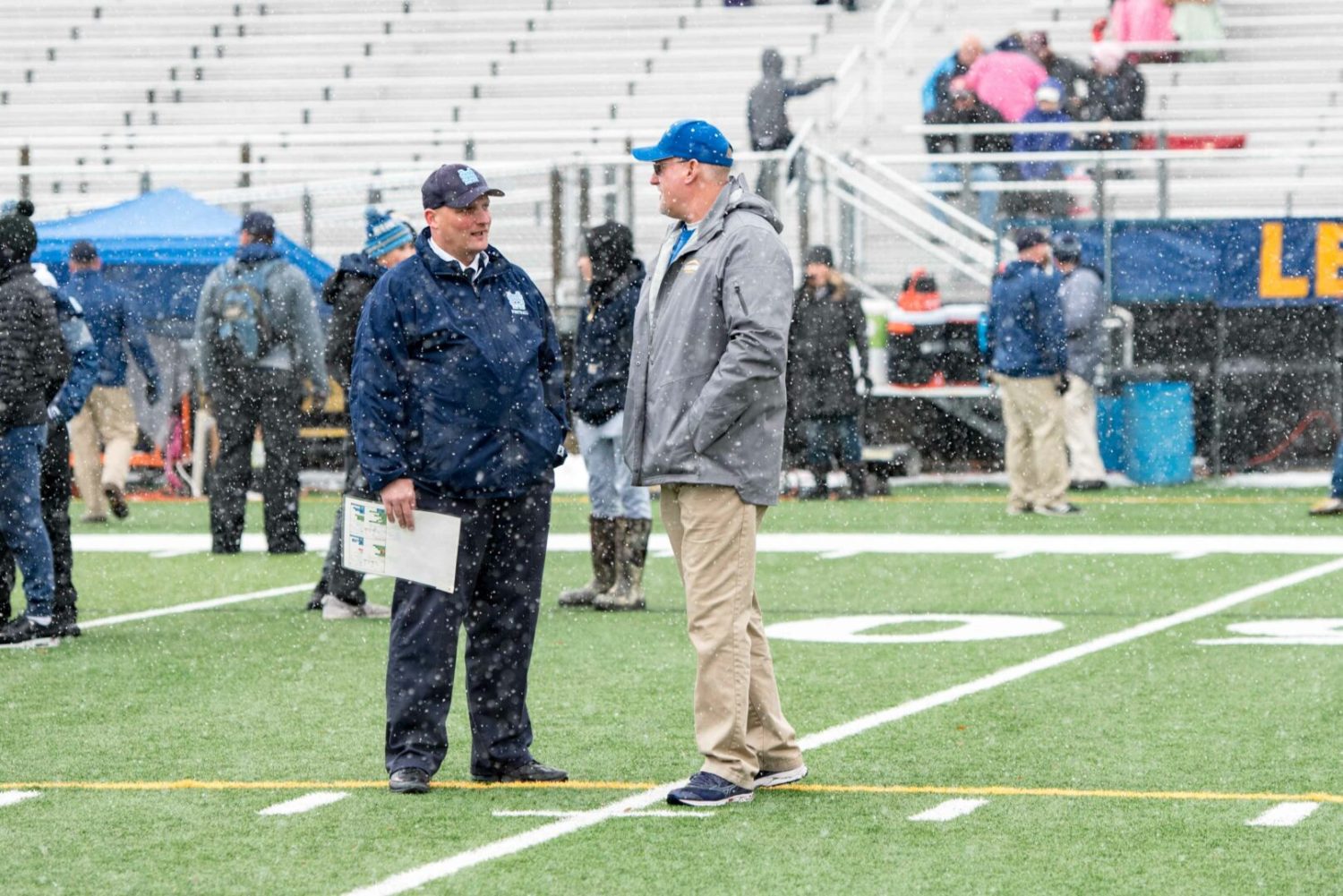 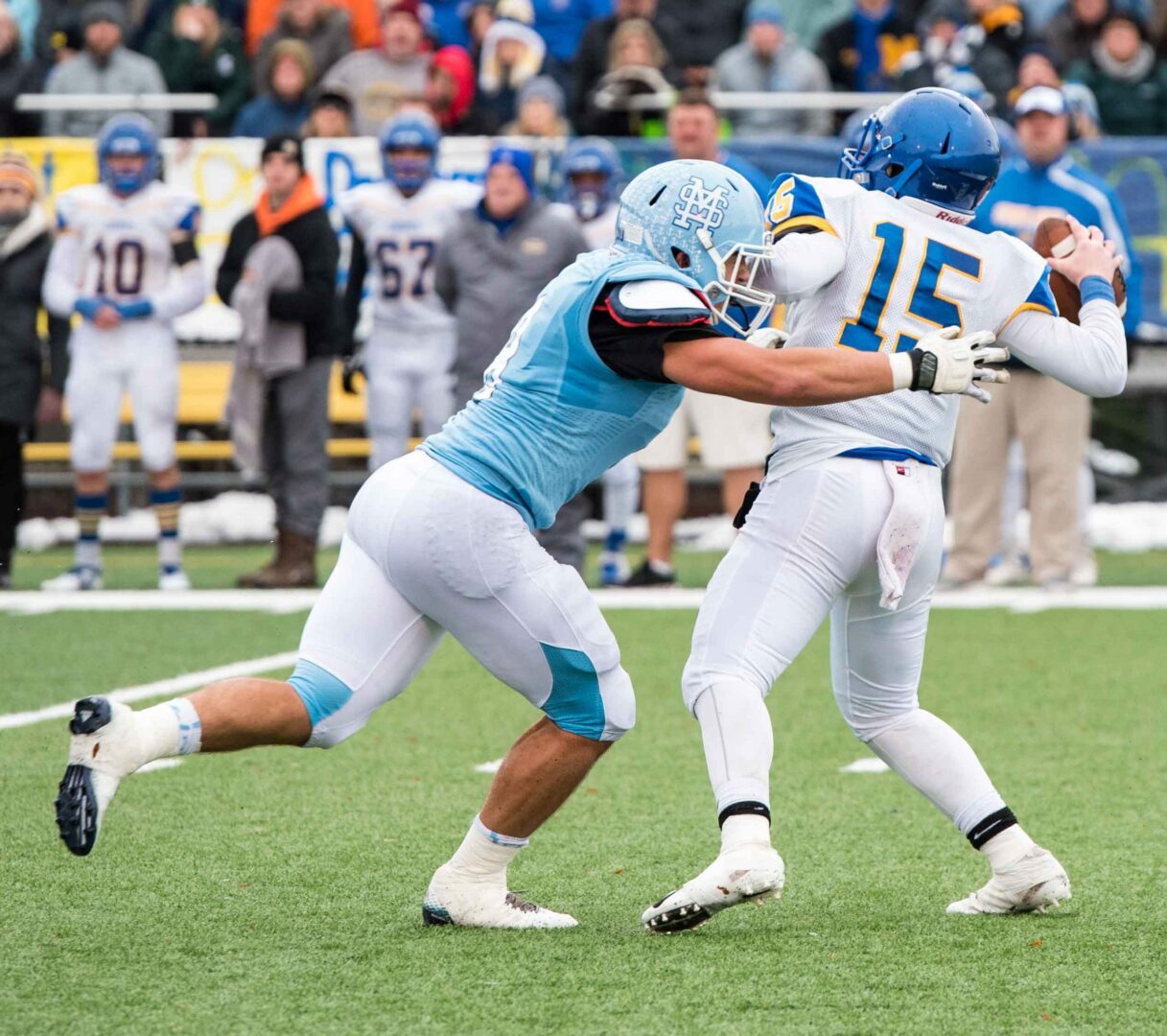 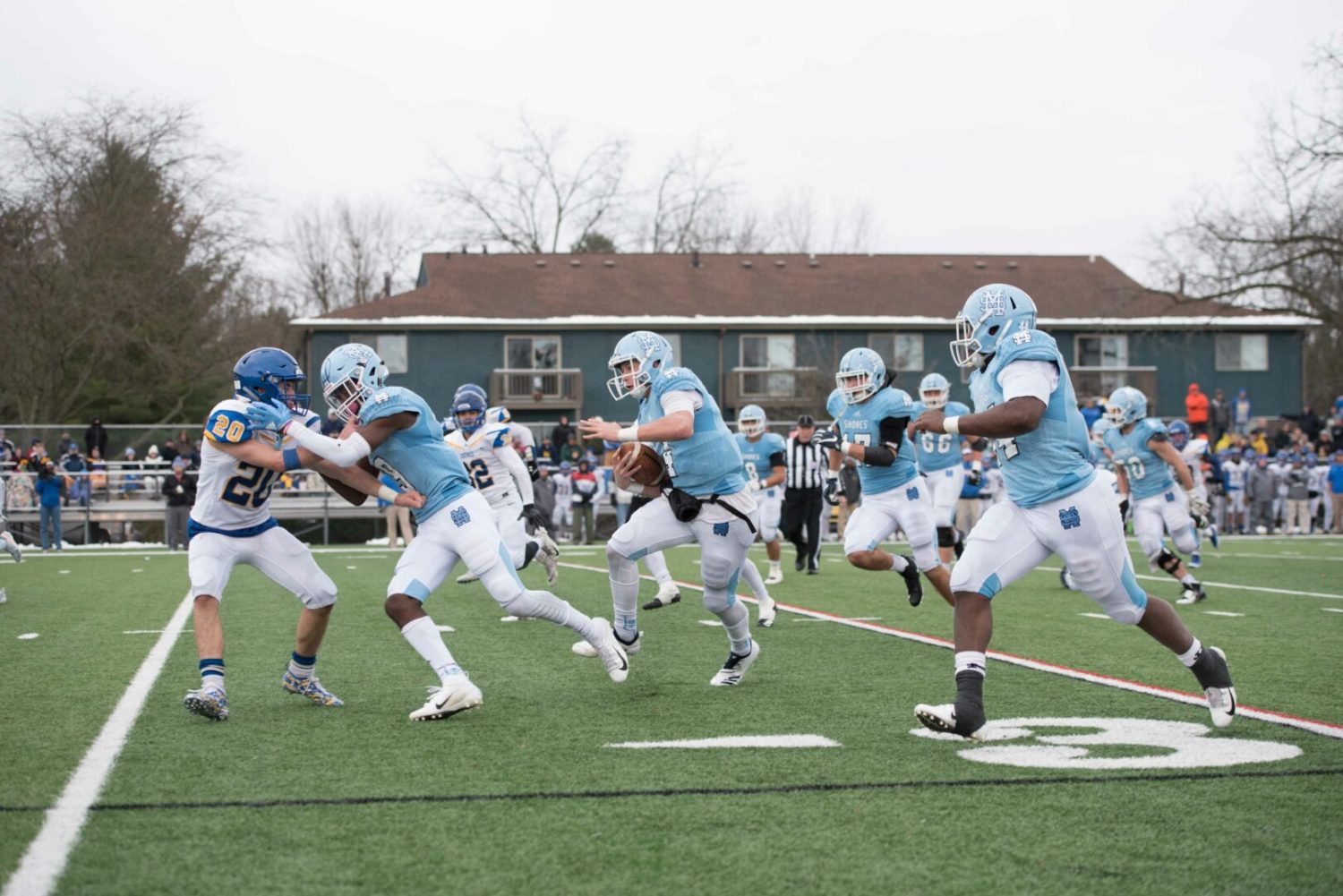 With blockers around him, Caden Broersma takes the ball 44 yards for the touchdown. (photo/Eric Sturr)