Sailors pile up the points against Portage Northern, move on to state semifinals

teams with his arm and feet.

That’s precisely what Mona Shores junior quarterback Caden Broersma did on Friday in the Sailors’ impressive 58-28 Division 2 regional victory over Portage Northern on their home field.
Broersma finished the game with 210 yards and three touchdowns rushing while adding 109 yards and two touchdowns on 5-for-8 passing.

James Gilbert runs away from the defense on his way to the end zone. Photo/Eric Sturr

The big win put Mona Shores, now 11-1, in next Saturday’s state semifinals against Midland, at a site and time to be determined.
Of course Broersma was quick to credit his offensive line, which dominated the line of scrimmage and allowed him to have the biggest game of his high school career – so far.
“They were huge,” said Broersma about the gaps he was given to run through. “Shout out to my offensive line and position players who made key blocks and opened up holes.”
The quarterback was right about the O-line, which made it possible for the Sailors to pile up a whopping 443 yards on 41 carries for a 10.8 yard per-carry average, and break one big play after another.
“I was extremely proud,” said Mona Shores head coach Matt Koziak. “I’m very proud of Caden executing, and we were finally able to get Sincere (Dent) to bust a few big ones late. Our kids were awesome. We’ve been undersized a lot on our offensive line, and I think our kids just found a way.”
While the Sailors scored often, it was Portage Northern that scored first in a wide open first quarter. Quarterback Tyler Helgeson found Torian Jackson for a 51-yard touchdown pass only 1:25 into the game, giving the Huskies a 7-0 lead.

But the Sailors responded quickly when Ke’Sean Sandifer took a handoff and broke loose for a 59-yard touchdown run to tie the game at 7-7 with 8:15 left in the first.
After a Huskie fumble was recovered by Mona Shores’ Lakeyse Longmire, Broersma found James Gilbert with a 30-yard touchdown pass on the first play after the turnover, putting the Sailors on top for good.
On the following possession, Broersma found daylight for a 57-yard touchdown run, moving the Sailor lead to 20-7 with 2:37 left in the first quarter.
The Huskies responded with a five-yard touchdown by Tyler Amos, making the score 20-14 early in the second quarter.
On the following possession, Broersma capped off a seven-play, 45 yard drive with a 17-yard touchdown run to put Mona Shores up 26-14.
The final first half score came from the Huskies when Helgeson punched in a one-yard quarterback sneak.
It was still a game at halftime, with the Sailors leading 26-21.

Mona Shores took the second half kickoff and took only four plays to score. Broersma connected with Gilbert on a 42-yard touchdown pass, giving the Sailors a 32-21 lead.
On the following Sailor possession, running back Sincere Dent had a 22-yard touchdown run, extending the lead to 38-21.
The Huskies pulled within 10 points early in the fourth when Anthony Tyus scored from eight yards out.
But Mona Shores extended its lead to a commanding 51-28 after a four-yard rushing touchdown from Broersma and a 32-yard TD run by Dent.
The final Sailor score came with 1:38 remaining when Tre’shawn Hatcher dashed in from 57 yards out.
Dent finished with 83 rushing yards and two touchdowns while Hatcher added 80 yards and one score on the ground.
“It’s a blessing,” said Dent, a senior who was the last Sailor on the field after the game. “It’s bittersweet because we get to keep playing, but I’m sad because it’s my last time playing on this field.”
Gilbert finished with 105 yards and two touchdowns on four receptions, while the Sailor defense was led by Jacob Wahlberg with five tackles.
Portage Northern was led by Tyus with 167 yards on 24 carries while Amos added 70 yards on 11 carries.
Next Saturday will mark the second state semifinal appearance in Mona Shores history. The Sailors made it all the way to the finals in 2014.
“It means a lot,” Koziak said about moving on to the state final four. “We’ve been in some district championships after 2014, and to just get out of districts is tough in West Michigan. But to have our program get to the semifinals twice in the last five years means a ton to our kids, and I’m really proud of those guys.” 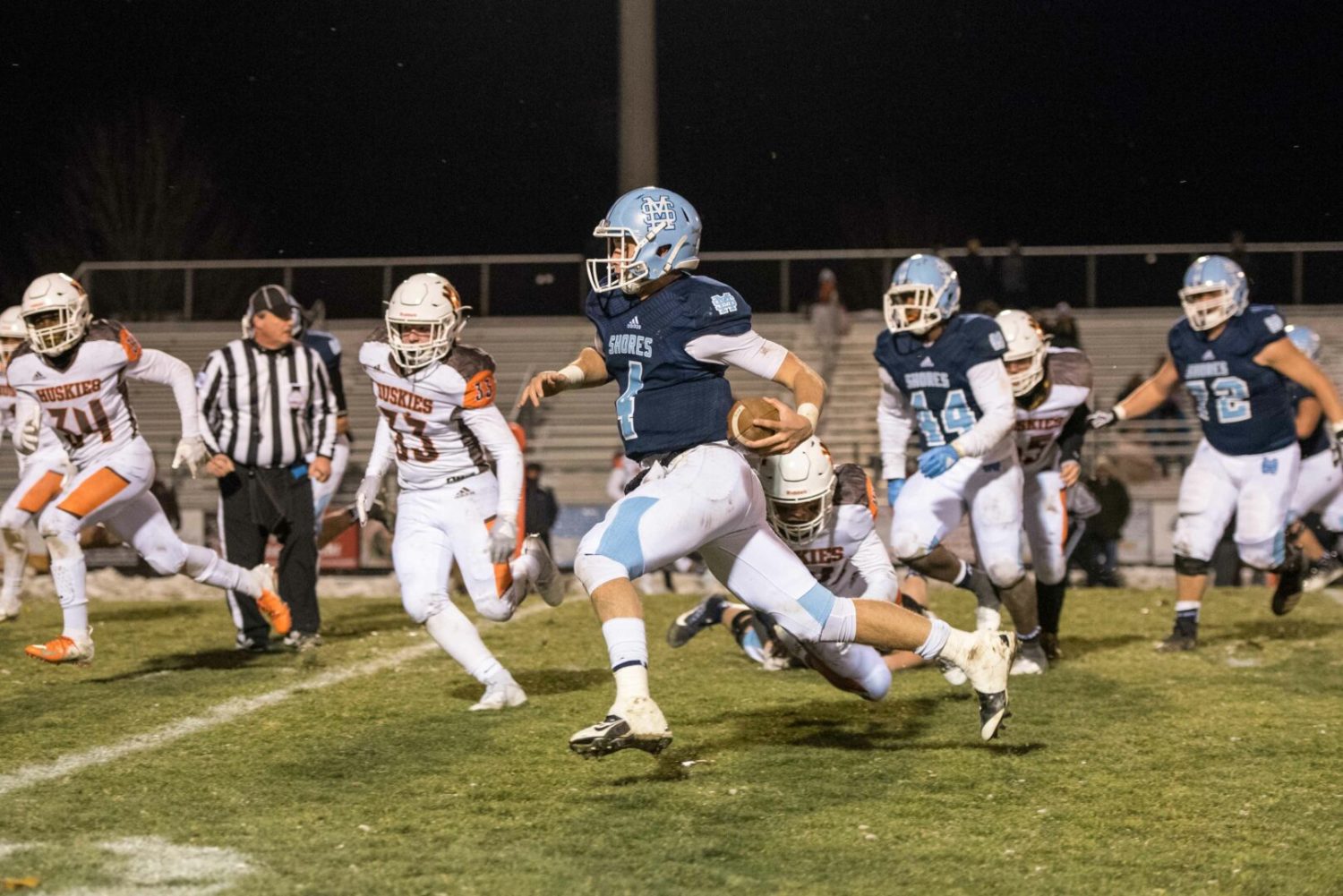 The Sailors open a big hole and Caleb Broersma take ball down inside the 5-yard line. (photo/Eric Sturr) 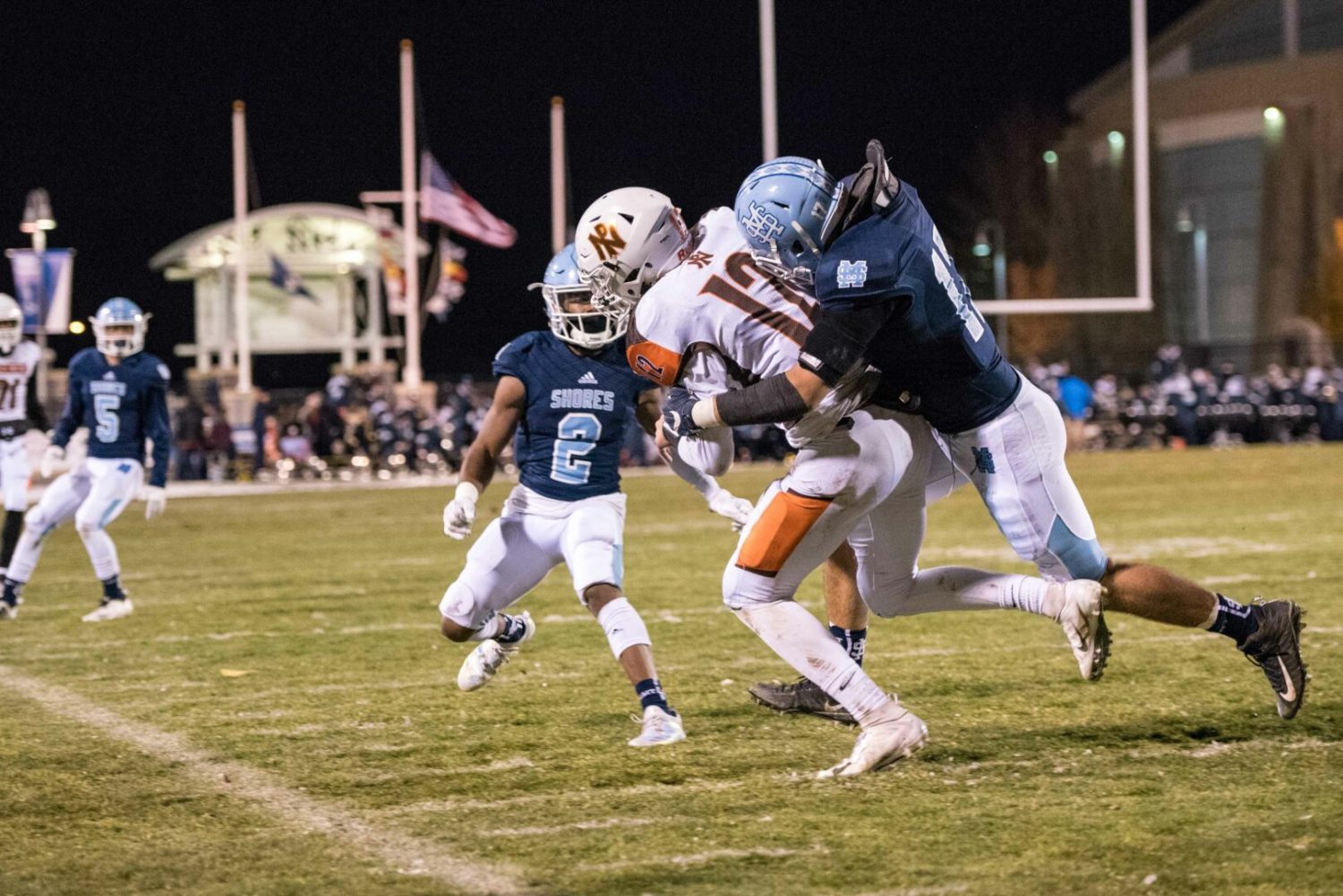 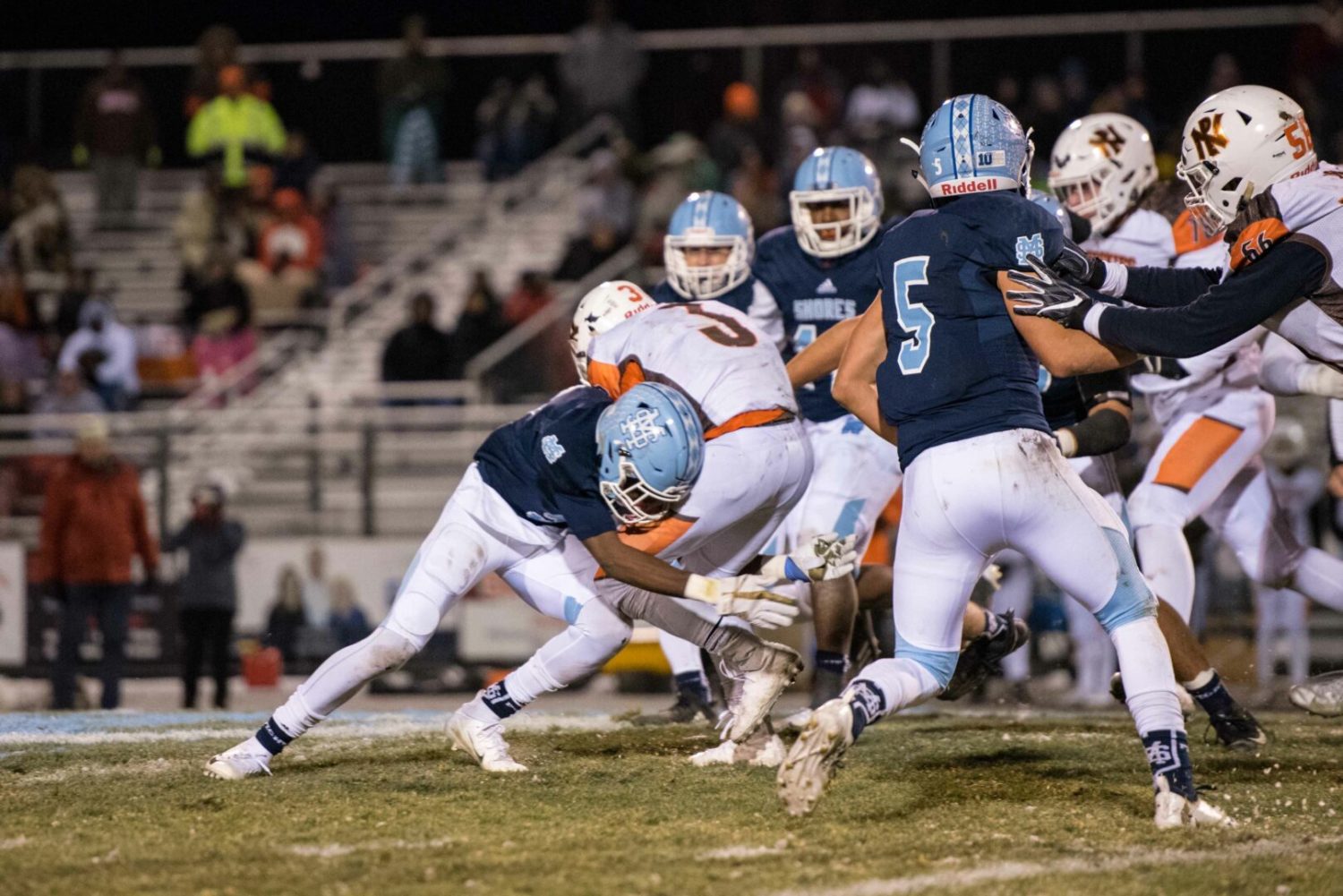 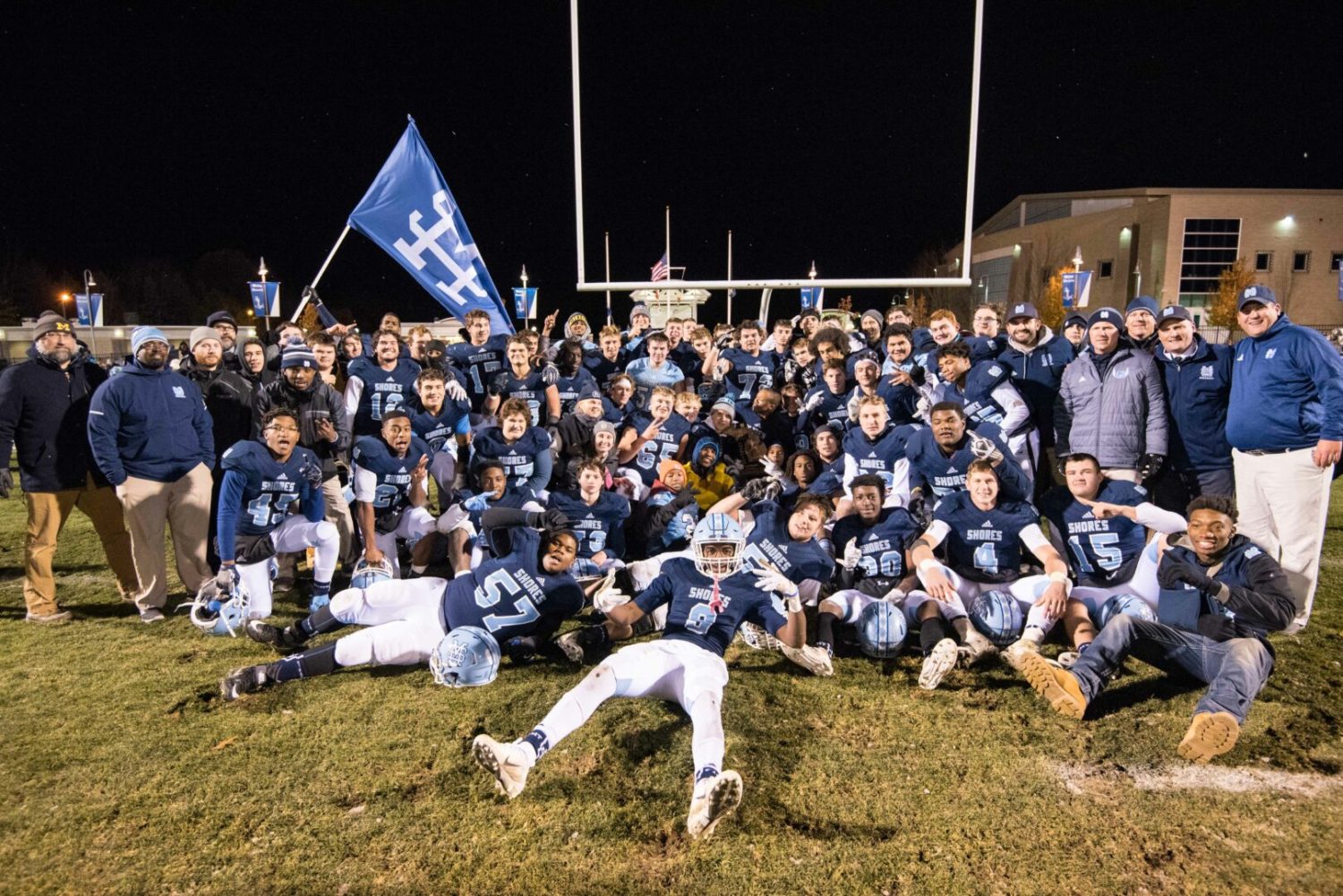 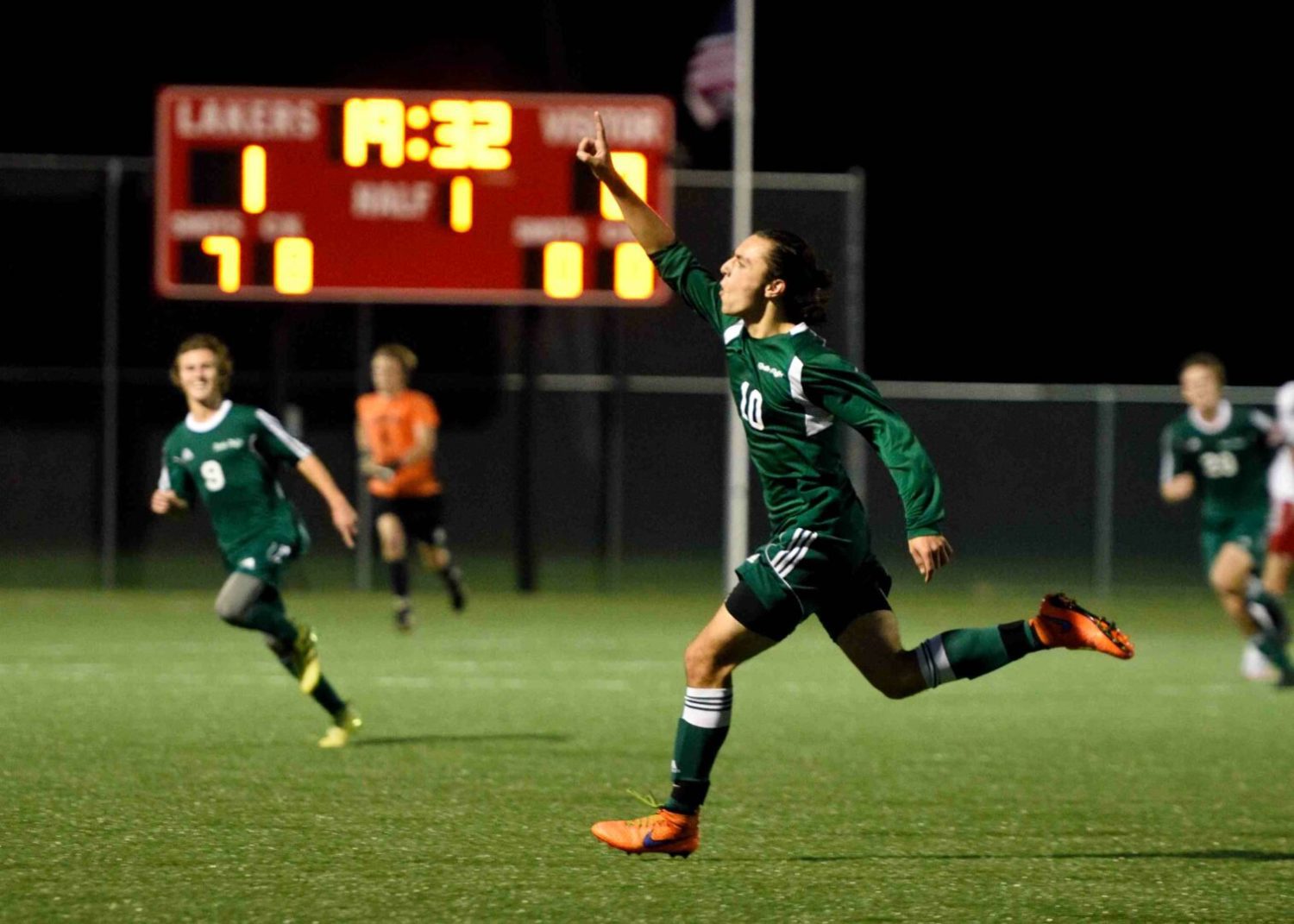