By Dave Hart
LocalSportsJournal.com
MUSKEGON TOWNSHIP – It has been quite a year for Muskegon Big Reds junior Cameron Martinez.

As a record-breaking quarterback, Martinez led the Big Red football squad through a wildly successful 14-week season that ended in the Division 3 state finals.
On Thursday night, during the third and final game of the 2018 Muskegon Area Sports Hall of Fame Basketball Classic, Martinez was once again in the spotlight.
He snagged an offensive rebound and scored the game-winning putback with 14 seconds remaining, giving the Big Reds an exciting 55-53 win over East Kentwood at Reeths-Puffer High School. 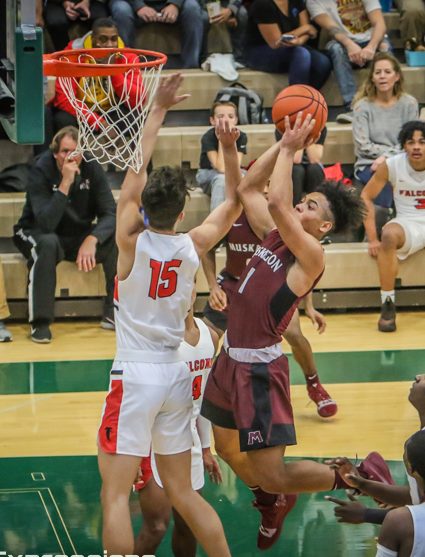 Cameron Martinez goes up for the shot in the lane for Muskegon. Photo/Joe Lane

The Big Reds are now 2-1 on the season while East Kentwood, which has played four more games, fell to 4-3.
Martinez only scored five points in the game and had just one field goal, but that lone basket made all the difference for Muskegon.
“He played 14 weeks of football and had no rest,” said Muskegon Coach Keith Guy about Martinez, who is also his stepson. “He is getting better with his timing, jump shots and his decision-making. He knows what we expect of him, he is giving us that and I am proud of him.
“I knew that the game would go down to the last possession. Both teams got up and didn’t close it. This game could have gone either way, but thank God we got the victory.”
The Big Reds started the game very slowly, trailing 11-1 with 2:27 left in the first quarter.
But Muskegon finished the quarter strong with an 8-0 run, sparked by a four-point effort from Vernon Nash III, a two-point basket from De’airrus Ware and a pair of free throws by Samarri Knox.
The Big Reds trailed 11-9 at the first buzzer.
Muskegon continued its tear in the second quarter, scoring six of the first eight points to take a 15-13 lead with 6:16 left in the half. 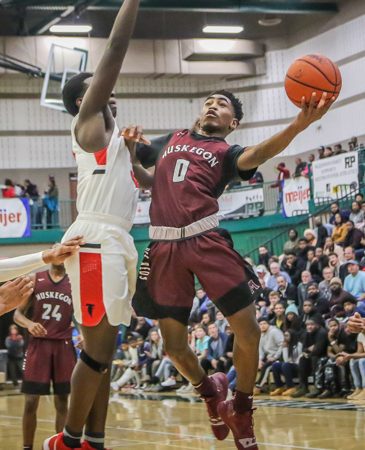 The Big Reds closed the first half with a 10-7 run that broke a 17-17 tie and gave them a 27-24 advantage at halftime.
Nash led Muskegon with 12 first-half points.
The Big Reds maintained their lead throughout the third quarter, outscoring the Falcons 20-15 and taking a 47-39 advantage heading into the fourth.
Muskegon maintained that lead until Jordan Jackson nailed a three-point shot with two minutes left to give the Falcons a 52-50 lead.
The Big Reds responded with a three-pointer from Eonte Tornes with 1:14 remaining to take a 53-52 lead.
East Kentwood tied the game on a free throw from Jackson with just over a minute left.
Martinez’ game-winning putback came after a missed three-point attempt from the right corner.
Nash paced the Big Reds with 15 points while Ware added nine points, 14 rebounds and four blocks.
The Falcons were led by Ja’moni Jones with a game-high 19 points. 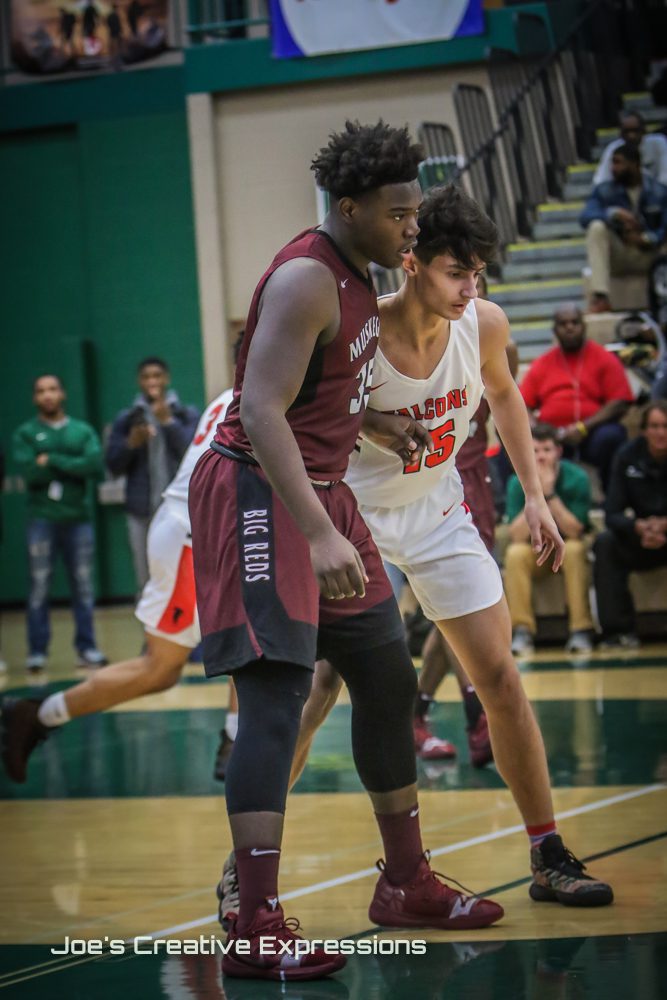 Muskegon’s No. 35 Billie Roberts gets ready to make a move for position in the post. Photo/Joe Lane 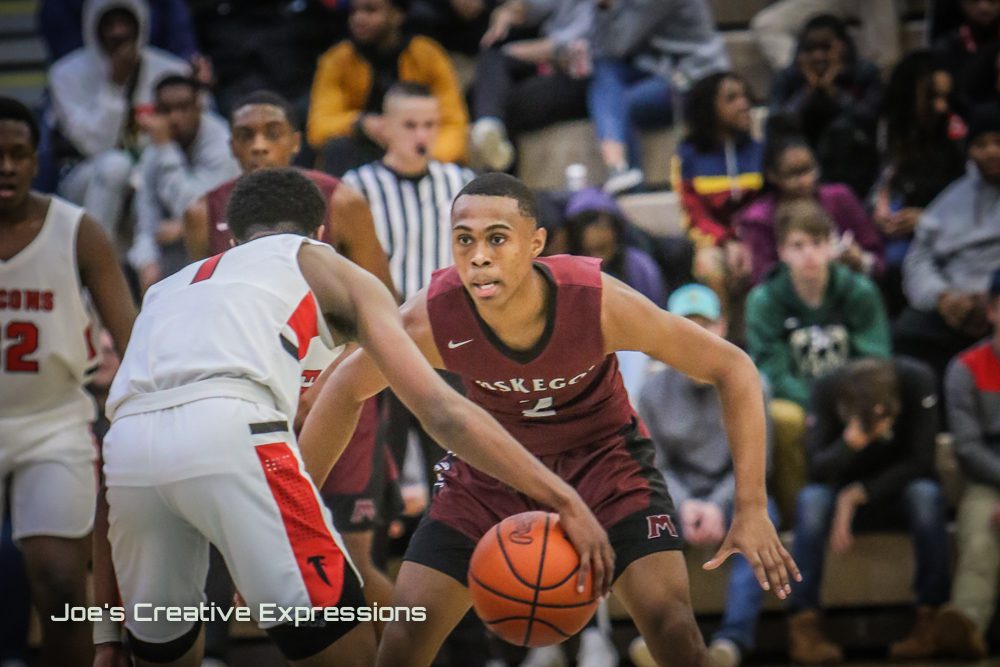 Zy’Kier Davis gets low on defense for Muskegon. Photo/Joe Lane 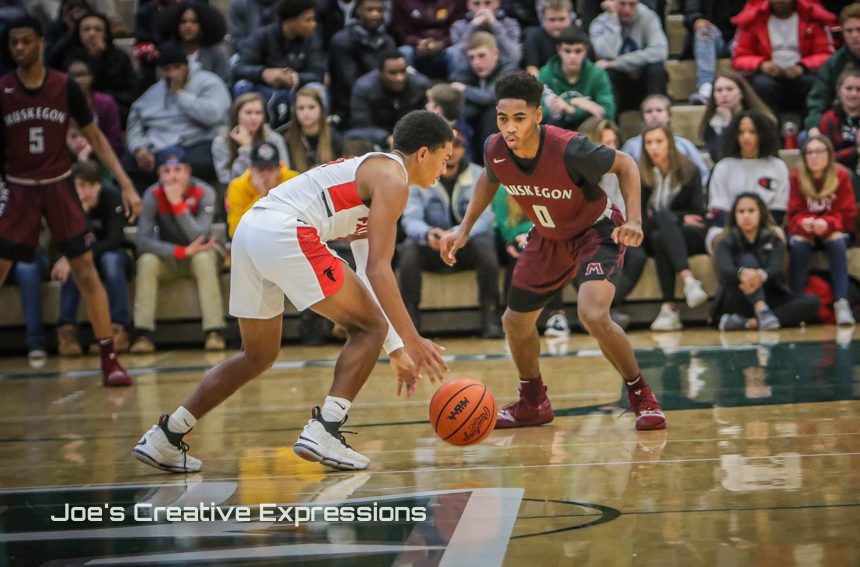 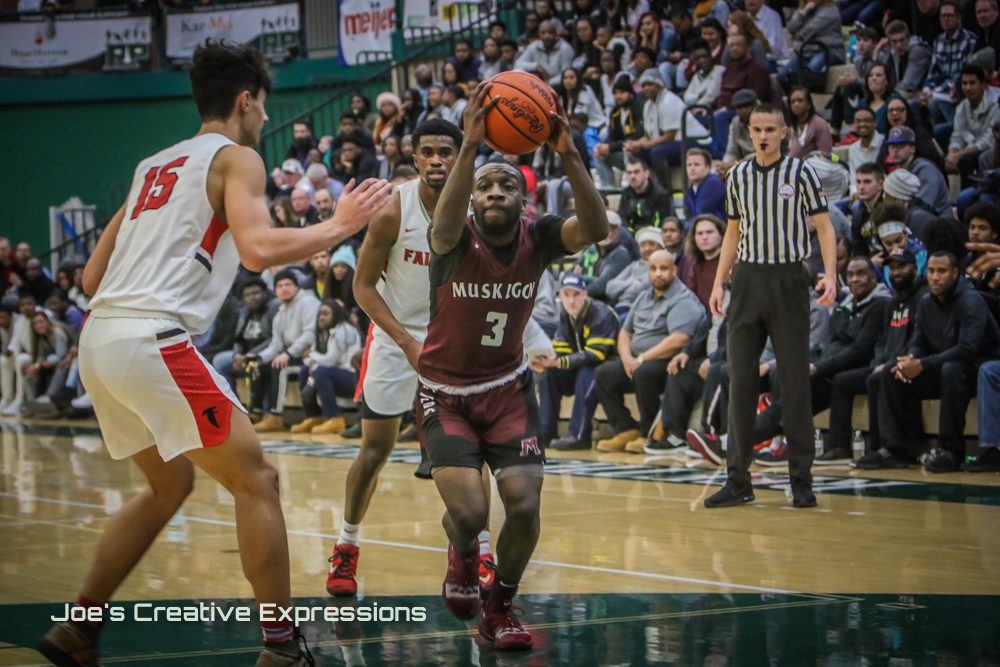 Eonte Tornes drives through the lane for Muskegon. Photo/Joe Lane 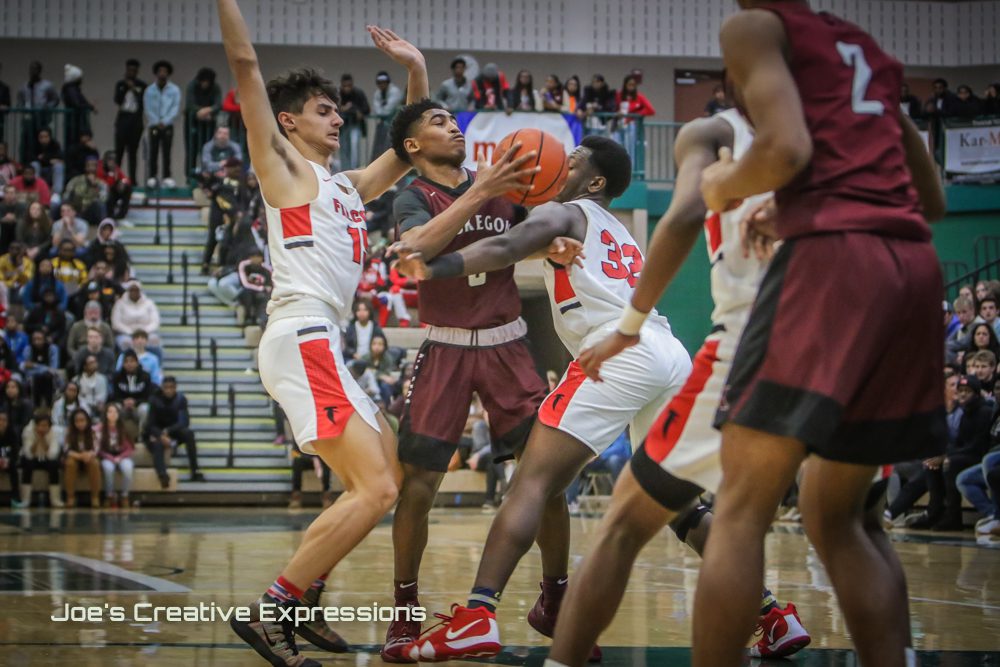 Vernon Nash III gets fouled going through the lane for Muskegon. Photo/Joe Lane 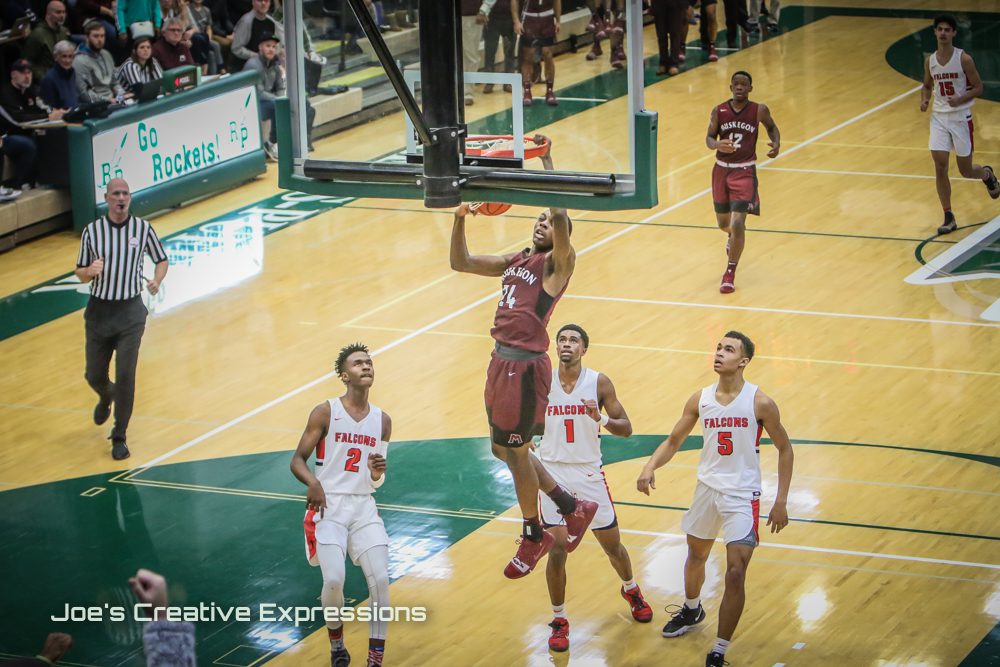 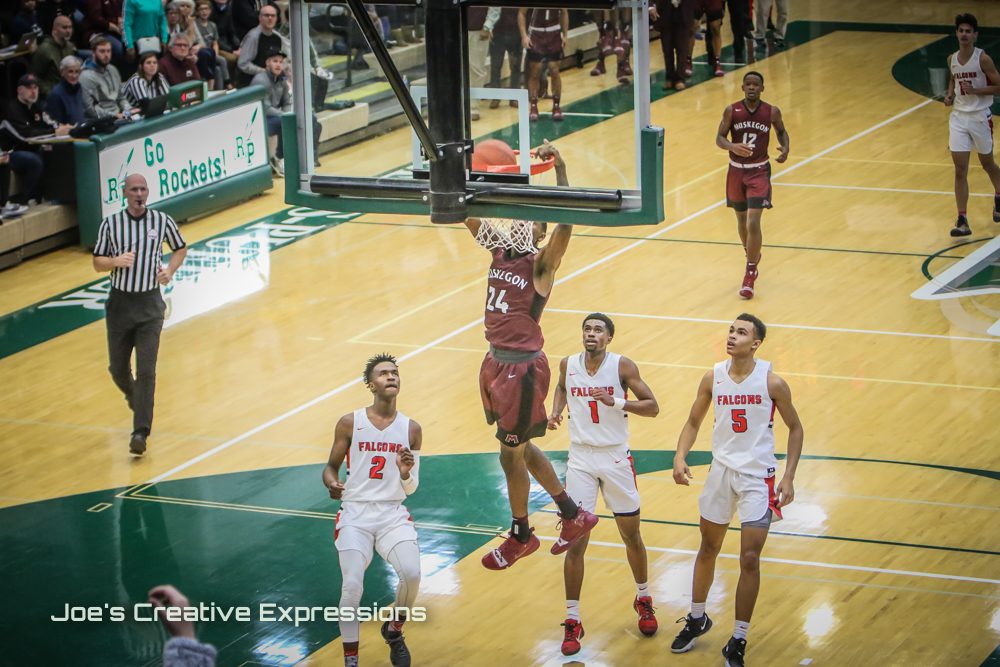 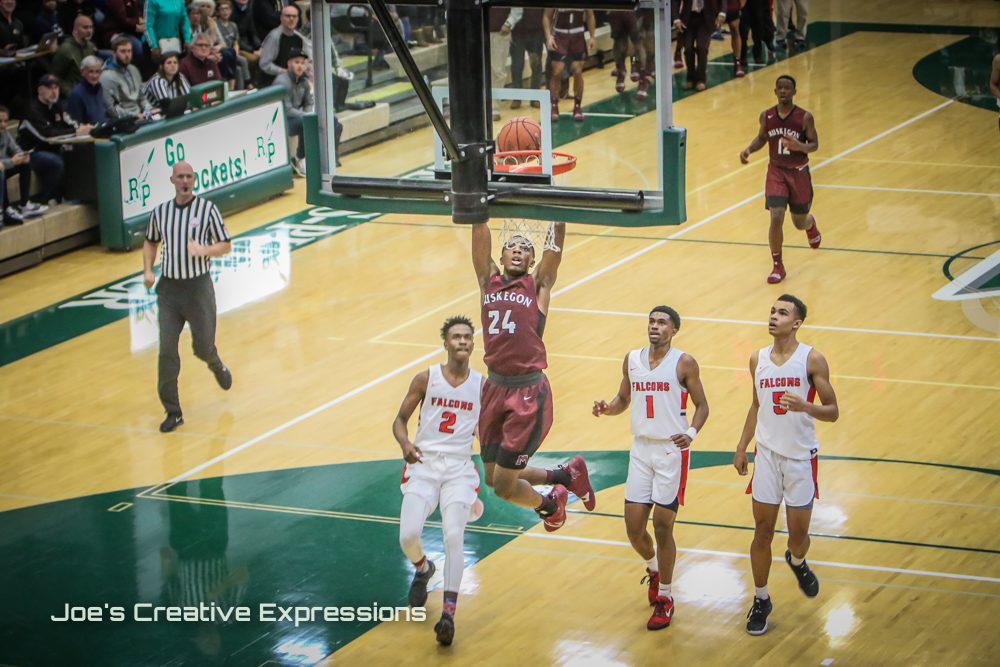 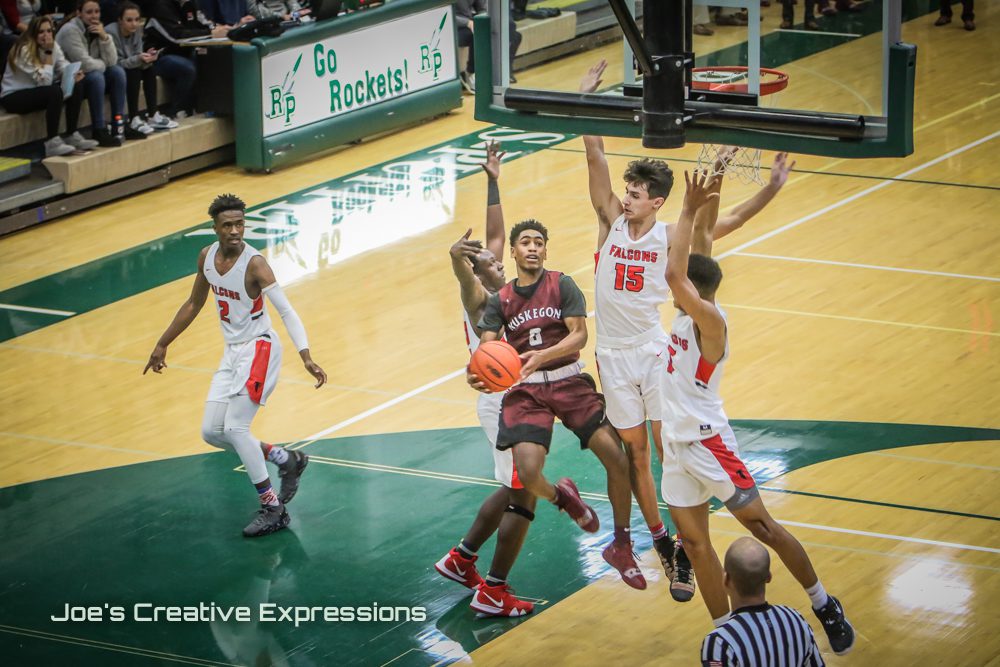 Vernon Nash III scoops his way to the hoop past the East Kentwood defense. Photo/Joe Lane 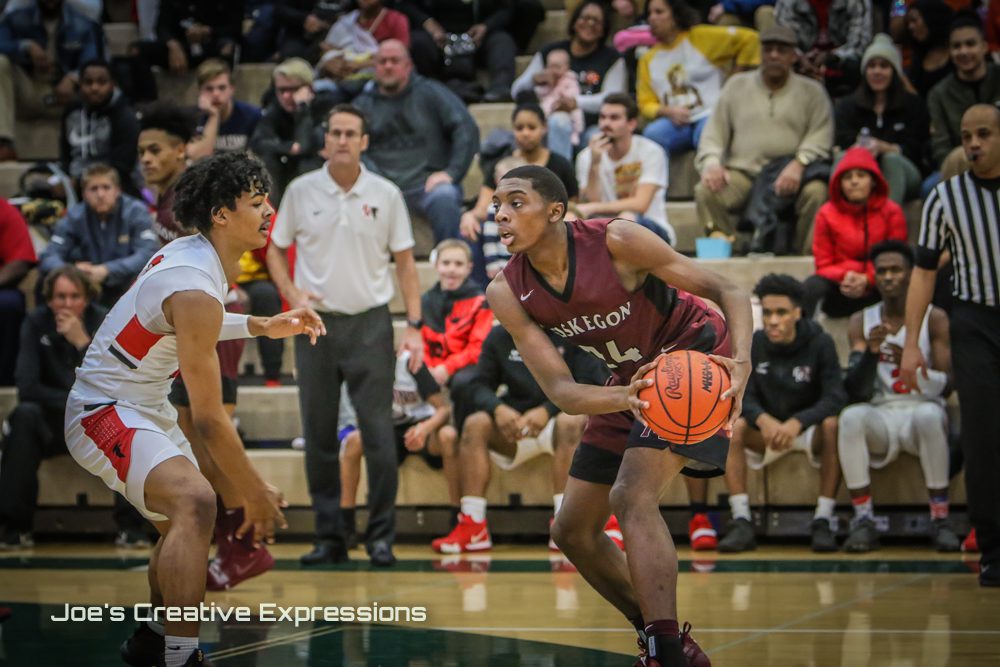 De’airrus Ware looks to make a pass for the Big Reds. Photo/Joe Lane

Muskegon’s Quentin Reynolds holds the ball at half court with teammates No. 1 Cameron Martinez and No. 24 De’airrus Ware. Photo/Joe Lane