this season, following the graduation of standout Aubrey Goorman. 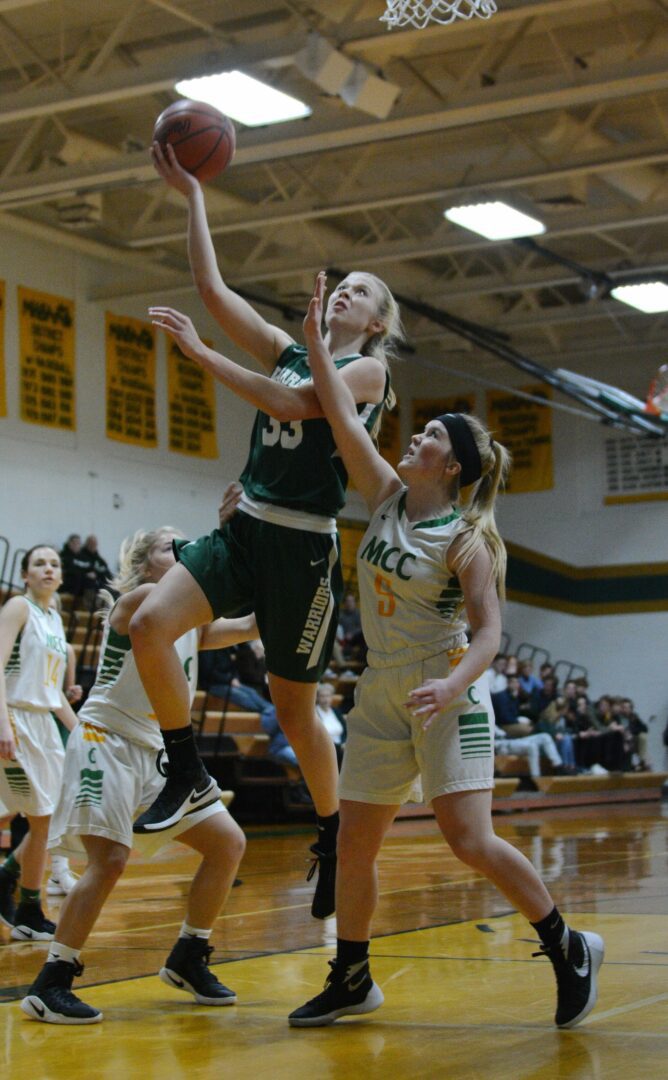 But the new era looks to be in good hands behind sophomore Taylor Folkema, who tied a school record 39 points while also adding nine rebounds and eight steals in a 69-17 road victory over Muskegon Catholic in Lakes 8 Conference action on Friday.
“It feels really good,” said Folkema about her performance. “The team really helped me out and assisted me.”
The Warrior defense helped Folkema rack up her point total, forcing 41 Crusader turnovers, with 27 steals.
“I think right from the get-go our girls were excited about the rivalry,” said WMC head coach Jeremy Goorman. “They really played hard right from the opening tip, and set the tone in the first quarter. We have a lot of good defenders on our team.”
Western Michigan Christian jumped out to a 21-4 lead and forced 19 MCC turnovers in the first quarter.
In the second the Warriors outscored the Crusaders 22-6 to take a 43-10 lead into the halftime break.
Folkema showcased her skills in the third quarter, dropping 14 points and helping the Warriors take a 65-15 lead into the fourth.
Anna Sytsema had 13 points and 10 rebounds for the Warriors.
Muskegon Catholic was led by Hannah Ladd, Payton Helton and Kyra Tyler, who all had four points.
The Crusaders drop to 0-2 on the season. The Warriors are 2-0 and seem to be bonding well as a team.
“We’ve been working really hard as a team and trying to connect, because we lost some really good seniors from last year,” Sytsema said. “It’s been really fun, and I feel like we’re blending even better than we did to start last year. It’s been awesome.”
Even Coach Goorman admitted he’s been a bit surprised by the strong Warrior start to the season.
“I knew we had some talent returning, but they’re coming into their own, and I’m pleasantly surprised,” said Goorman, Aubrey Goorman’s dad. “It’s a great way to go into the post-Goorman era.” 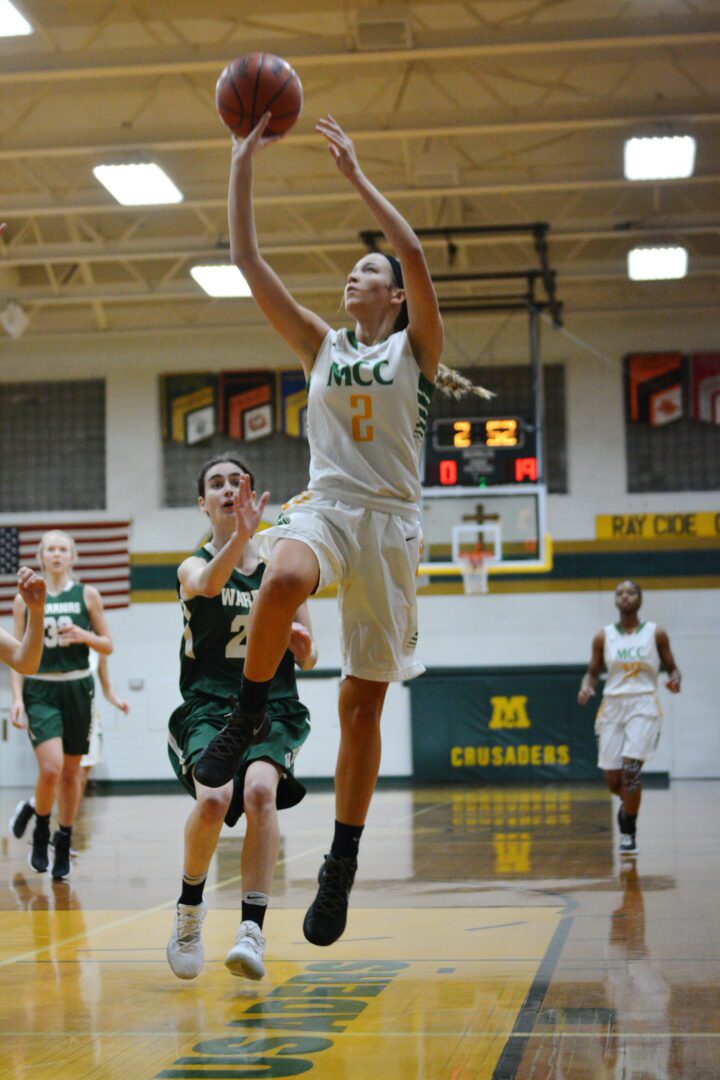 MCC’s Kyra Tyler goes up for the layup. Photo/Michael Banka 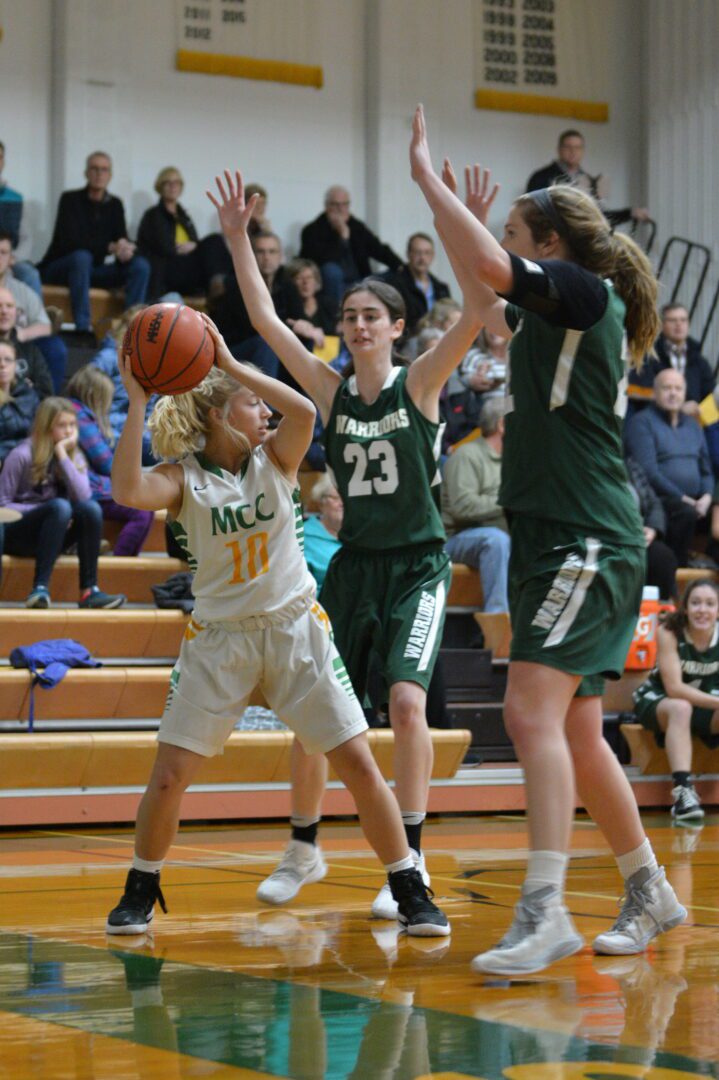 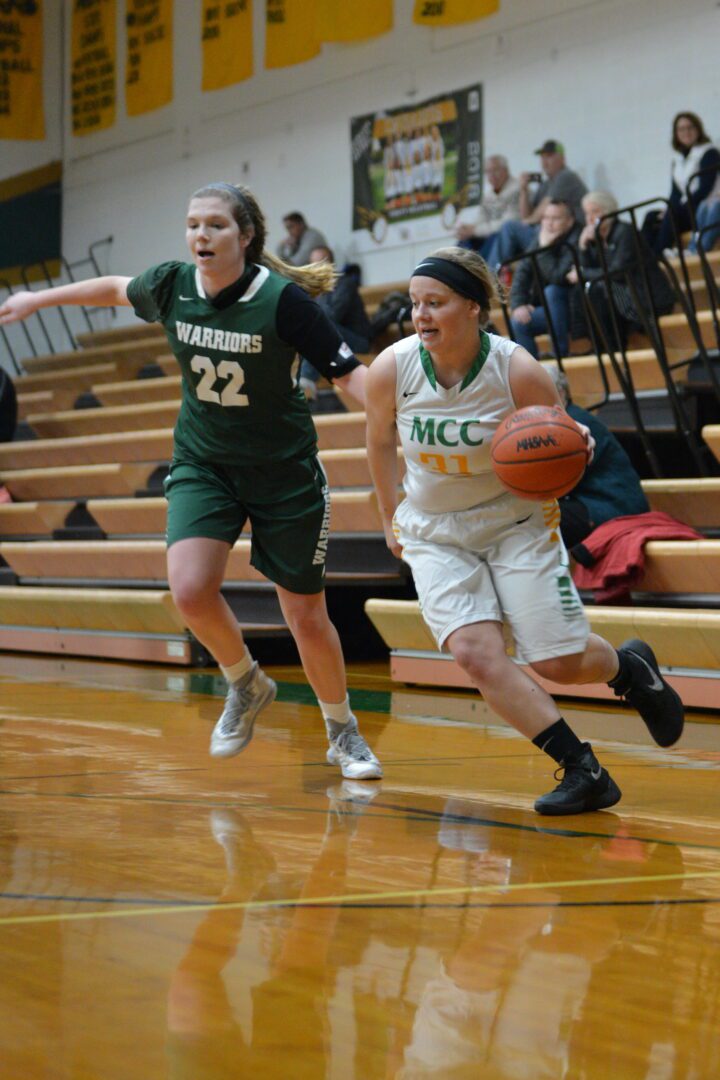 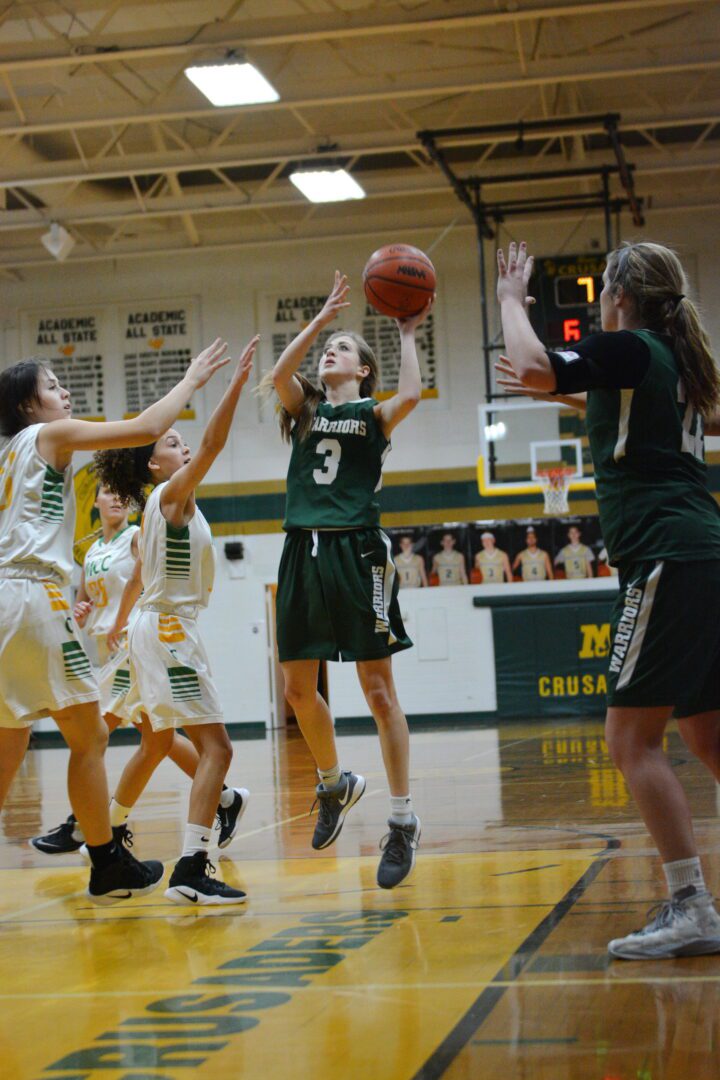 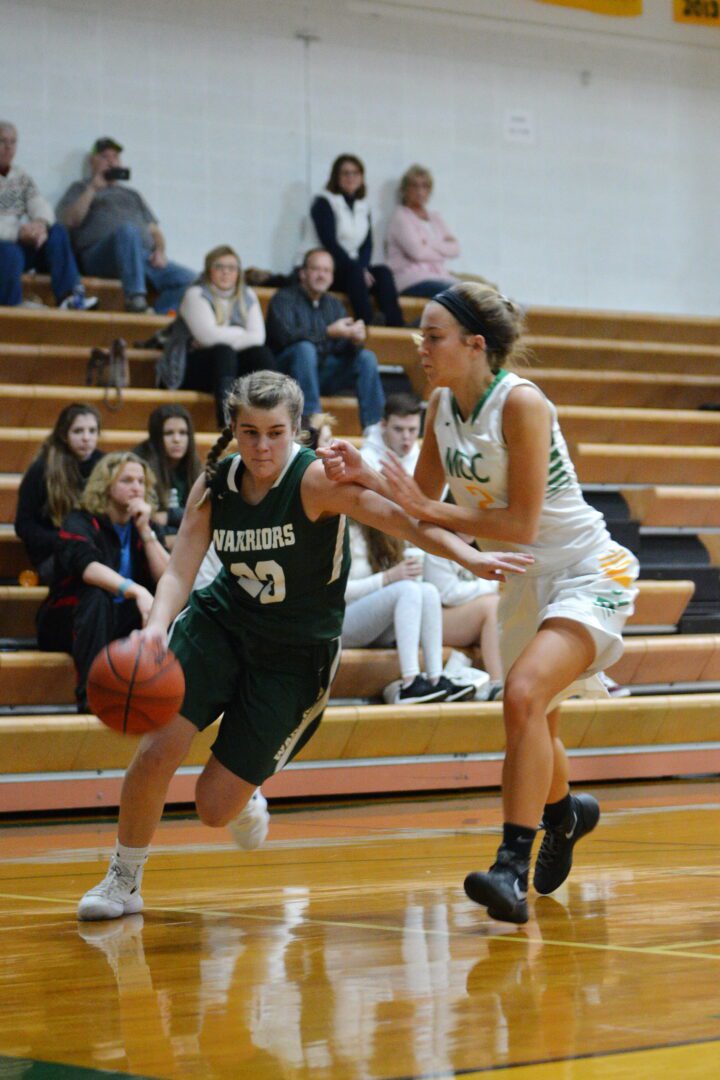 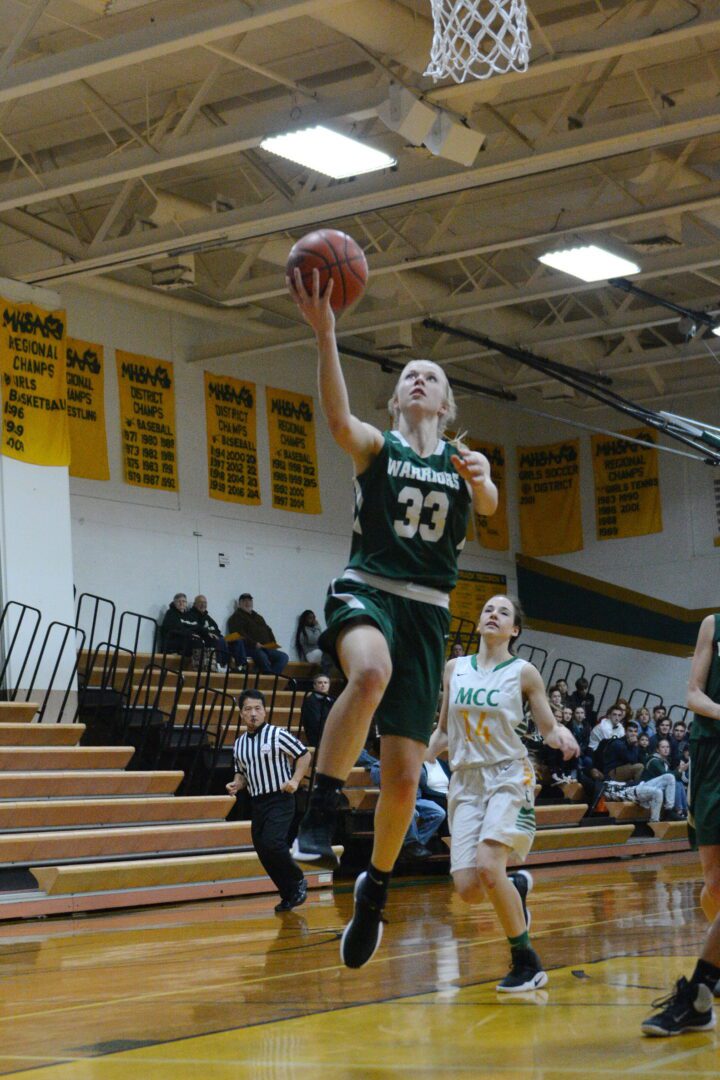 Taylor Fokema goes up for two of her 39-points for WMC. Photo/Michael Banka 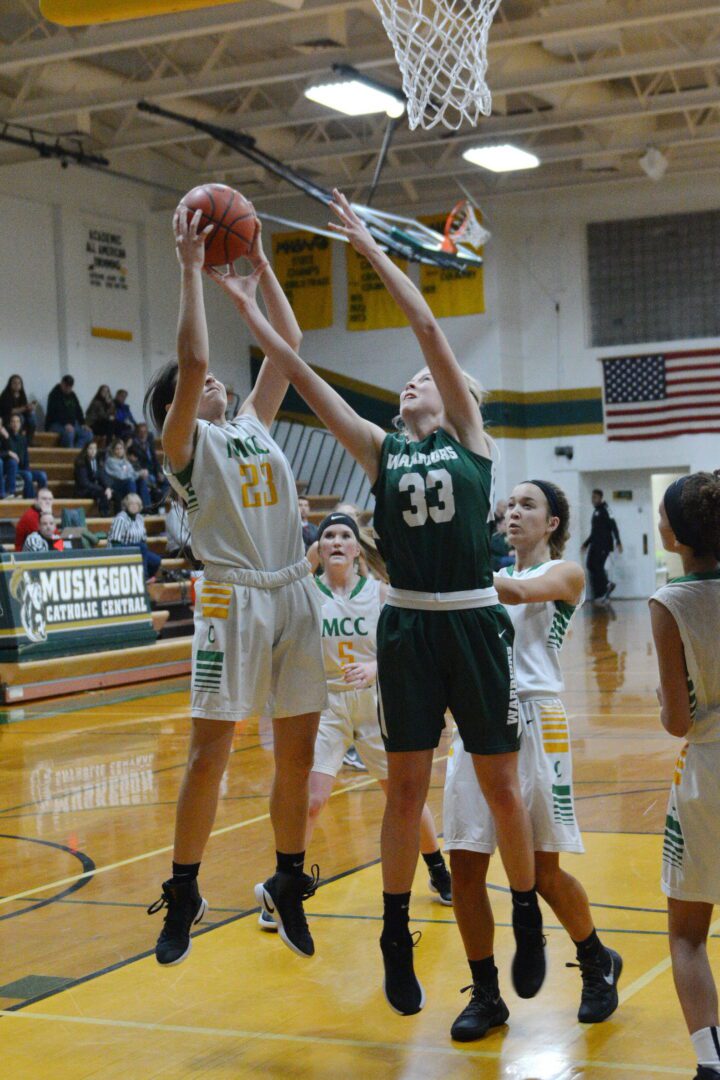