Jacks rally with just seconds left to tie the game, then get victory in overtime

By Dave Hart
LocalSportsJournal.com
MUSKEGON- The Muskegon Lumberjacks have shown many great attributes of a superior team so far this season.

On Saturday, they demonstrated a very valuable never-say-die approach, after trailing 3-2 late in the contest.
The Jacks kept battling all the way to the end, and it almost took that long.
Muskegon’s Igor Larionov scored the game-tying goal with only 10.7 seconds left in regulation to force overtime. Then the Jacks finished off the Madison Capitols in overtime with a goal by Colby Bukes, earning a 4-3 win in front of 2,777 fans at L.C Walker Arena. 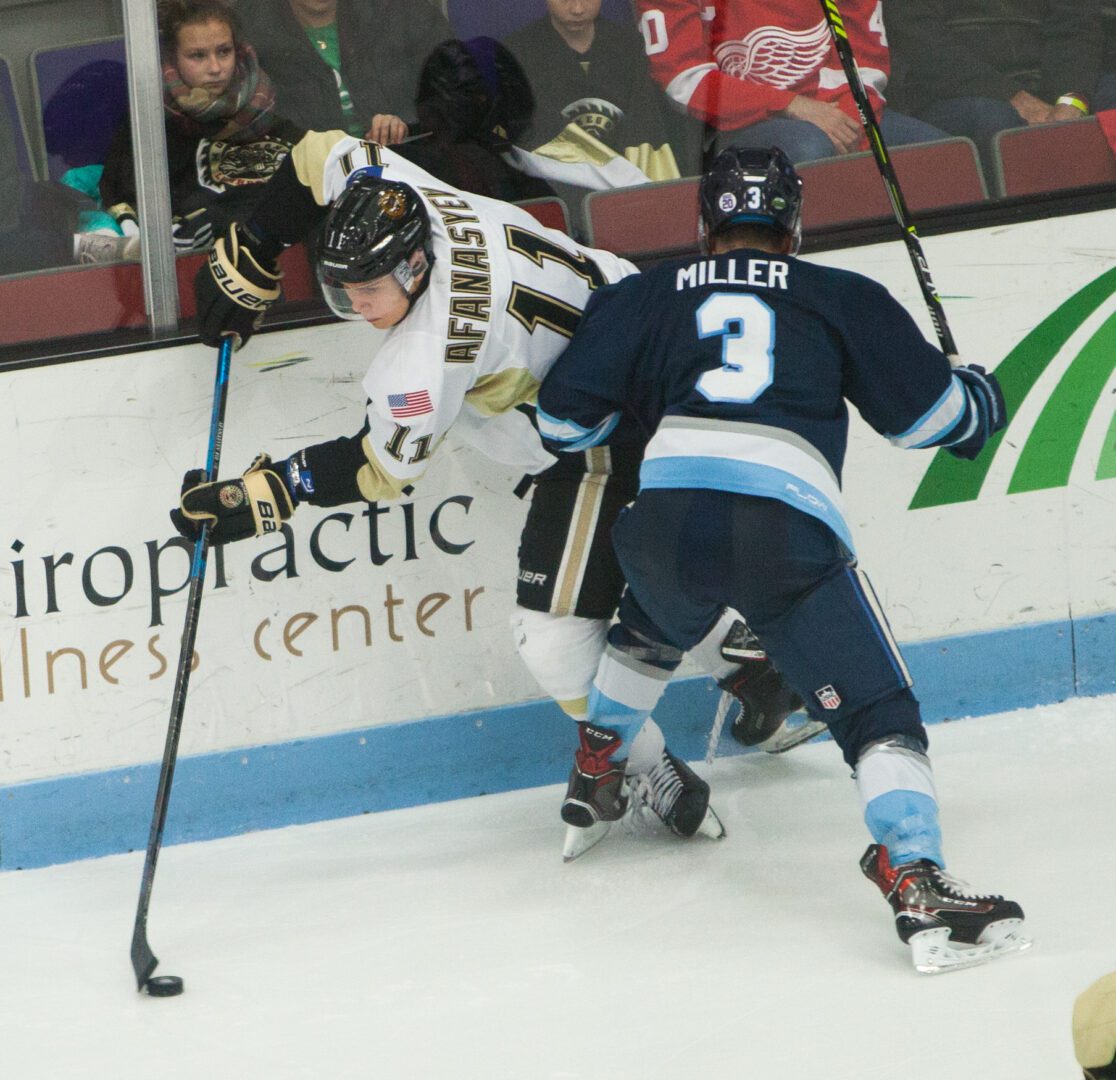 Igor Afanasyefv battles for the puck along the boards against Madison’s No. 3 Sam Miller. Photo/Jason Goorman

Muskegon is now 22-5-1 on the season, good for 45 points and first place in the USHL’s Eastern Conference.
The Lumberjacks will close out the 2018 portion of their schedule on Monday when they host the second-place Chicago Steel. Faceoff is slated for 8:15 p.m., a late start because of the holiday.
“We had a real good push during the last six or seven minutes of the game,” said Lumberjacks coach Mike Hamilton. “We just couldn’t put it in, so it was nice to see us get rewarded in the end and not frustrated. Madison played a phenomenal hockey game.
“If you want to learn about our team you should go to our practices. As soon as I say the losing team (in a practice scrimmage) has to do pushups, they literally kick the shit out of each other to avoid doing them. These guys are willing to do whatever it takes to win.”
Muskegon had many chances to control the contest, with seven power play opportunities, but failed to score.
They also outshot Madison by a significant margin in the game, 49-27.
“We probably have to do a better job of finding some of those rebounds,” Hamilton said. “But we are getting good looks on the power play.” 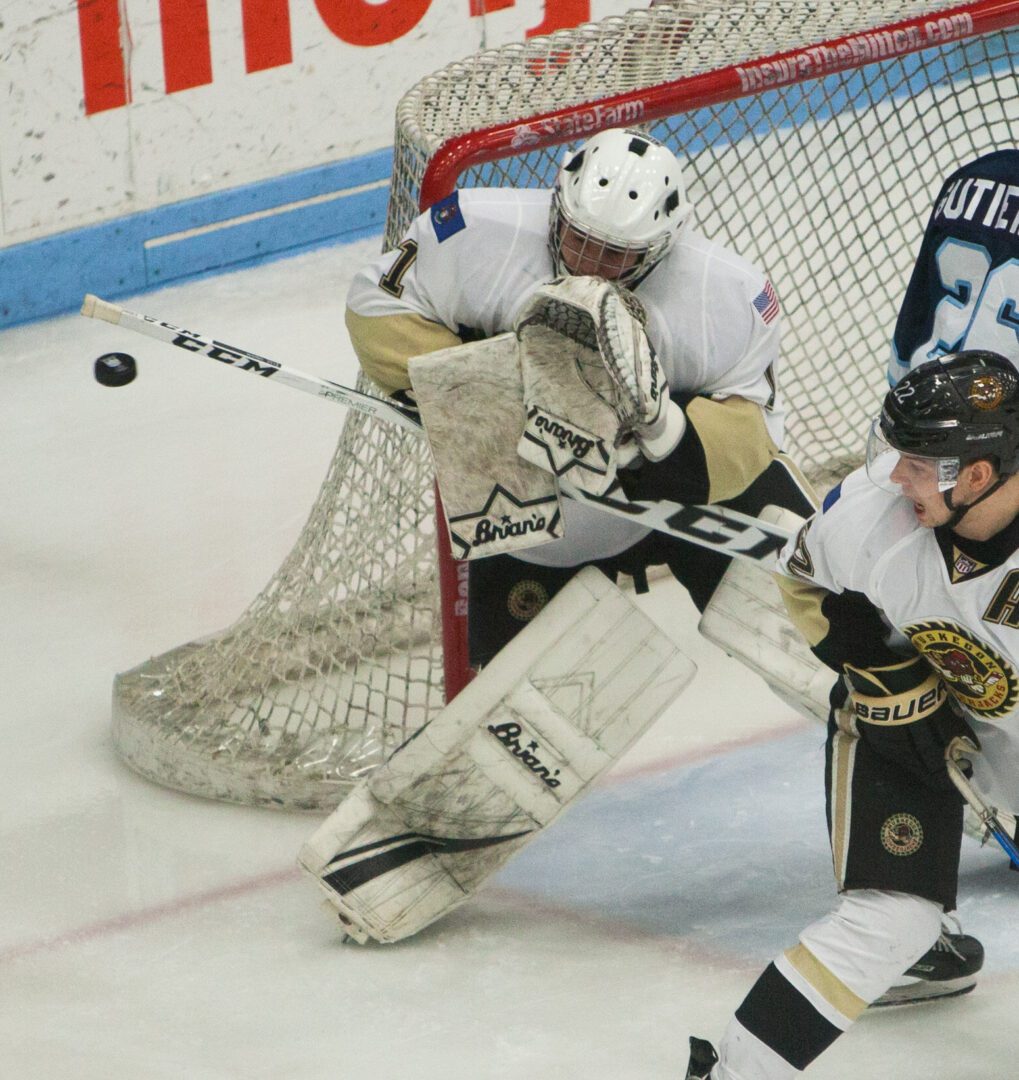 Ryan Mcinchak makes a high save in goal for Muskegon. Photo/Jason Goorman

The Lumberjacks opened the scoring 6:37 into the first period on a goal from Bobby Lynch. The Capitols responded with a shorthanded tally by Chase Brand at the 15:45 mark of the opening stanza.
Muskegon regained its lead at the 11:23 mark of the second period with a goal from Larionov. Madison tied the game 2-2 on Brand’s second goal of the evening at 15:39 of the second period.
Kalle Ericksson’s goal midway through the third period gave Madison its first lead, and it was almost enough to win the game.
The Lumberjacks thought they tied the score with eight minutes remaining, but a goal was disallowed because the Madison goaltender was pushed into the cage as the puck slid in the net.
Muskegon pulled its goalie late in the game to gain an extra skater and try to score the equalizer.
That finally came whenLarionov put the puck in the net for his second goal of the evening with 10.7 seconds left to force an overtime period.
“It was one of those moments where you throw the puck at the net and you hope it goes in,” said Larionov, son of former Detroit Red Wing great Igor Larionov, who was in attendance. “Thankfully we finally got a lucky bounce and it went in.”
Bukes scored the game-winning goal 2:03 into the overtime period.
Muskegon goalie Ryan McInchak picked up his first USHL victory in his first career start, stopping 24 of 27 Madison shots. 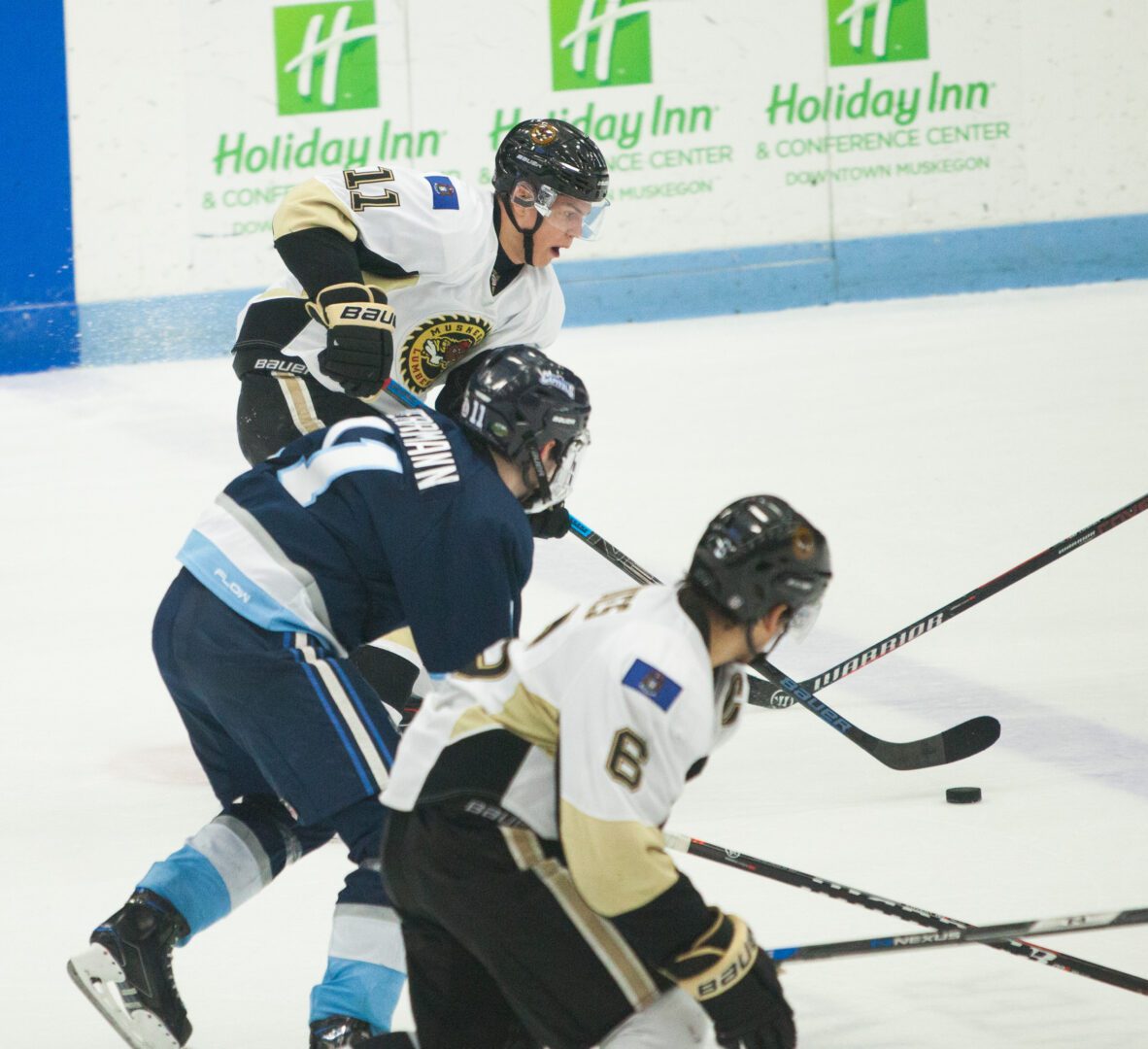 Muskegon’s No. 11 Igor Afanasyev leads the puck across the blue line to set up Colby Bukes for the game winning goal. Photo/Jason Goorman 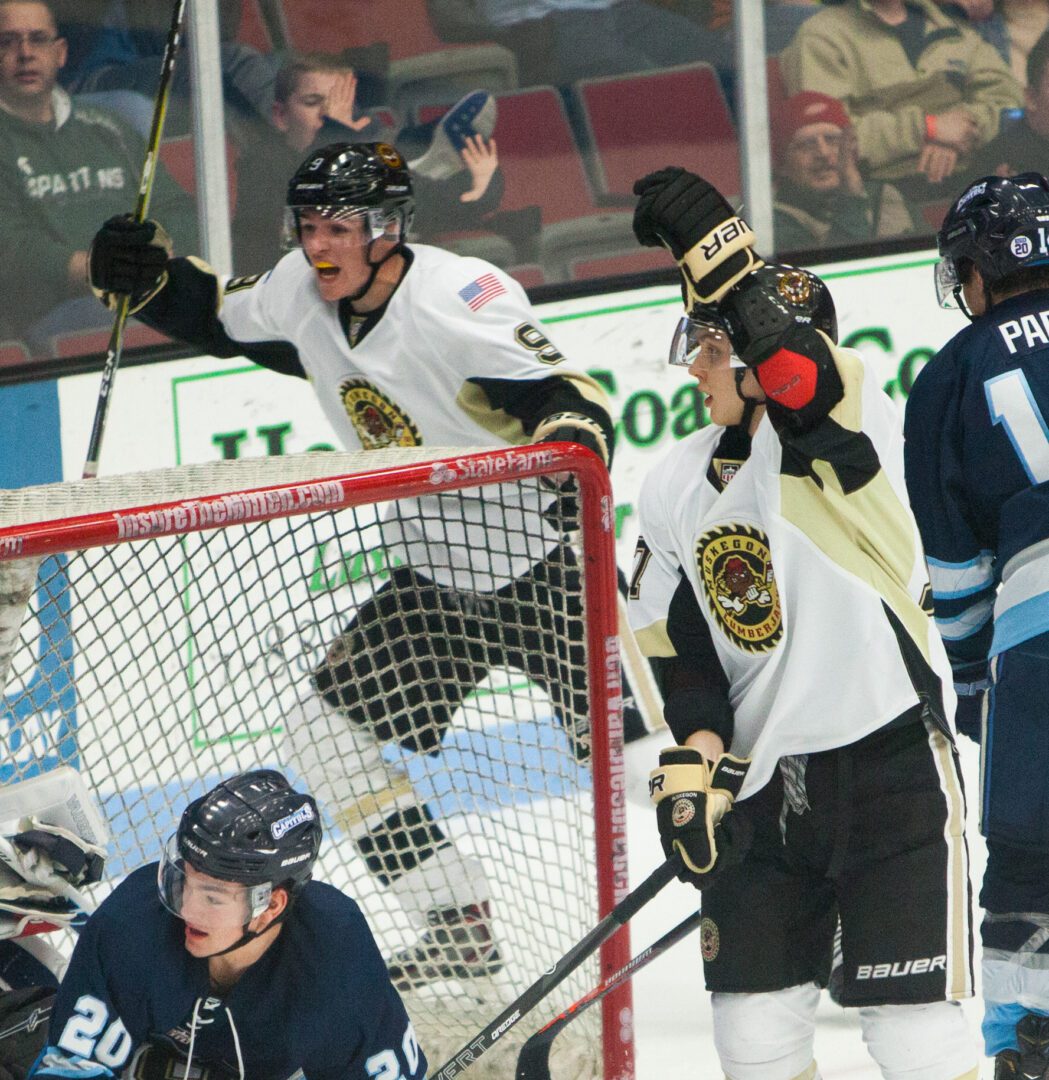 Bobby Lynch celebrates while No. 17 Igor Larionov looks towards the referee on what was supposed to be the tying goal for Muskegon in the third period. Photo/Jason Goorman