Larionov mimics his famous dad with OT goal, giving the Lumberjacks a 4-3 win over Dubuque

By Steve Gunn and Dave Hart
LocalSportsJournal.com
MUSKEGON – Igor Larionov not only shares his famous father’s name. He also scores big goals like his dad.

In the 2002 Stanley Cup finals, Igor Larionov Sr. scored on a backhand shot in the third overtime to give the Detroit Wings a dramatic victory over the Carolina Hurricanes.
On Saturday, the younger Larionov scored a remarkably similar goal with a backhand shot with 41 seconds left in overtime to give the Muskegon Lumberjacks a thrilling 4-3 victory over the Dubuque Fighting Saints in front of 3,117 fans at L.C. Walker Arena. 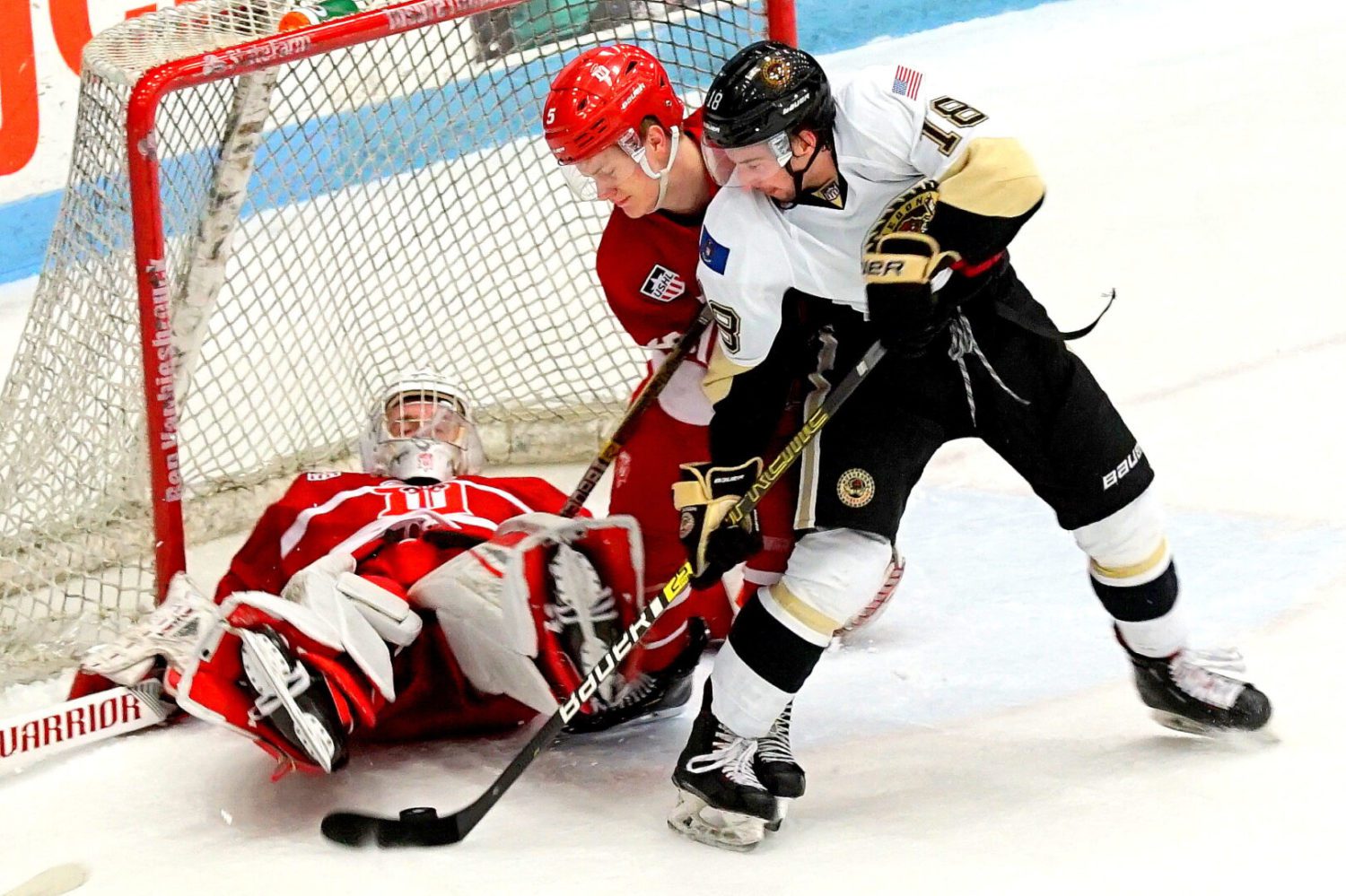 “It was a 1-on-2 and I was looking for the late man,” said Larionov, who was four when his dad scored that long-ago goal. “I cut to the middle and did a spin and saw I had a chance to shoot it. I was dog tired and I knew I didn’t want to back check, so I needed to score.
“The 2002 triple overtime goal my dad scored went through my mind. It is pretty cool. He is in Russia right now, and when he wakes up I will have to send him the replay of the goal.”
The dramatic victory kept the Lumberjacks from experiencing their first losing streak of their thus-far incredible season. They lost 3-2 to Dubuque on Friday.
They now have a sparkling 19-4 record and 38 points in the USHL Eastern Conference standings, well ahead of second-place Chicago, which came into play on Saturday with 25 points.
“It was nice to see the guys battle back there after yesterday’s game,” said Lumberjacks coach Mike Hamilton. “The guys dug in today and put in a solid performance. We came into the third period down by a goal and found a way to win the period. Then we had to deal with adversity, and instead of pouting about it we came out and took care of business in OT.” 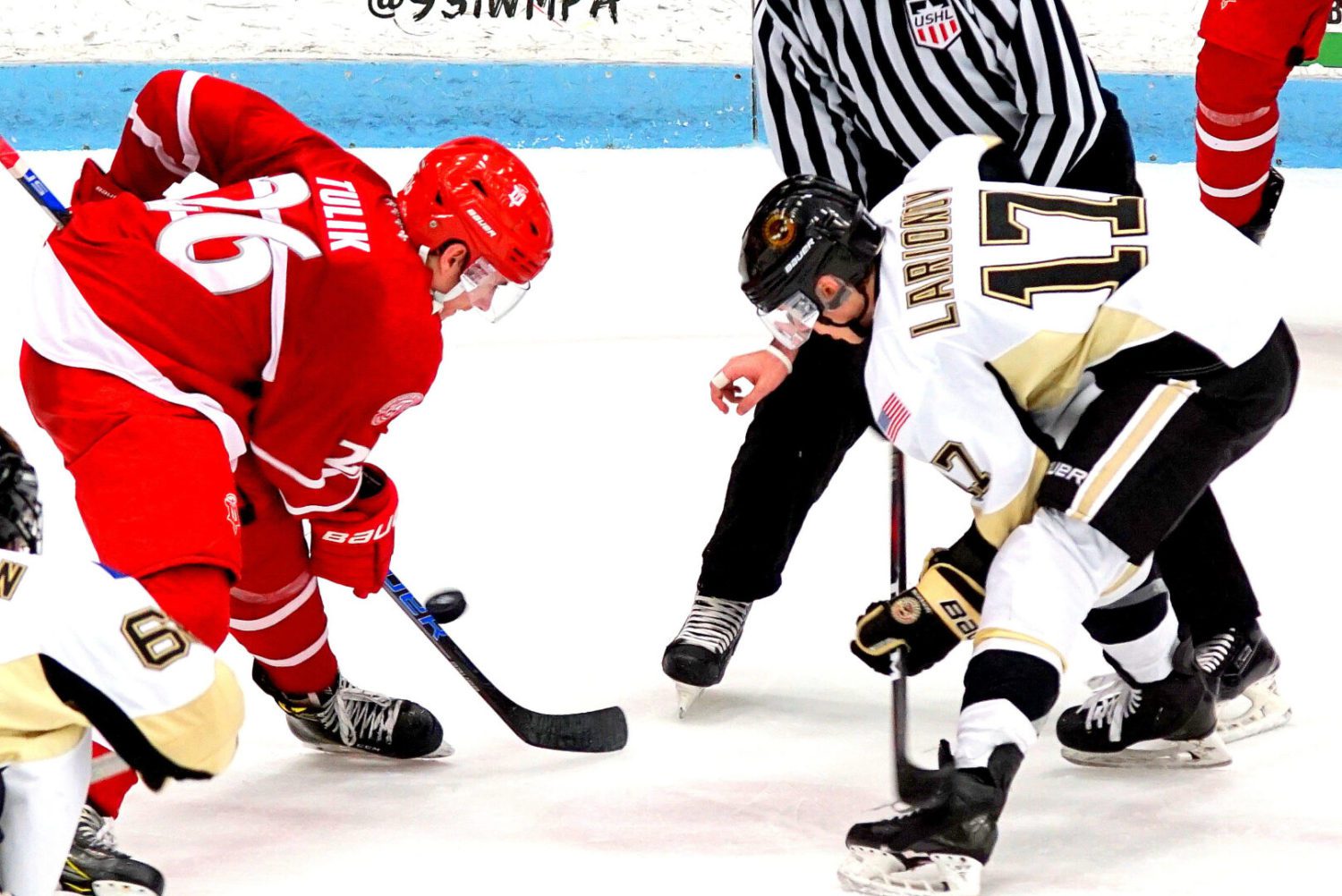 No. 17 Igor Larionov takes a face off for Muskegon. Photo/Leo Valdez

The Jacks had to fight for their latest victory.
They took a 1-0 lead when Egor Afanasyev scored just 2:51 into the game, with an assist from Nolan Sullivan. The Fighting Saints tied the score with six seconds left in the first period on a goal by Matias Maccelli.
The Jacks outshot Dubuque 23-9 in the period, but only managed the one goal.
Dubuque led 2-1 after two periods, after getting a goal from Derek Contessa at the 13:02 mark.
The Lumberjacks plowed ahead in the third period with a pair of pretty goals from Danil Gushchin, his seventh and eighth of the season.
The first came at 2:32 of the third, when Matt Staudacher ripped a shot from the point that went into Dubuque goalie Matthew Thiessen’s glove and dropped to the ice. Guschin was right there to pop in the rebound and tie the score 2-2.
Guschin gave the Jacks a 3-2 lead at the 11:29 mark when he took a perfect centering pass from Afanasyev and scored from in front of the net again.
But Dubuque continued to be troublesome, tying the score with a minute and a half left in regulation when Logan Pietila scored at the 18:31 mark.
That led to the five-minute OT period, when the two teams played 3-on-3 hockey, and Larionov settled things with his dramatic goal.
“Larry (Larionov) showed his skill and caught the backhand right under the goalie’s arm,” Hamilton said. “He does that stuff a lot in practice, and I am sure he learned that play from his dad, so it isn’t a surprise to us that he managed to score the goal.”
The Jacks outshot Dubuque 40-24. Muskegon goalie Brandon Bussi stopped 21 shots to improve to 19-2 on the season.