By Steve Gunn
LocalSportsJournal.com
KENT CITY – When asked how many 3-pointers his Kent City girls basketball team is

He explained that he doesn’t want his players to start thinking too much about shooting triples, when that’s just one aspect of the Eagles’ potent offensive attack.
“We will take whatever the defense gives us,” Carlson said. “We don’t want them to start thinking they have to keep up an average (of 3-pointers) or anything like that.”
But the fact is that the Eagles can hit the three, better than most teams in the state. 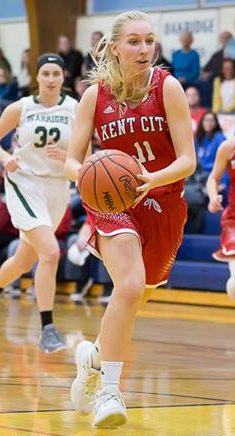 They demonstrated that on Friday night, when they nailed 25 3-pointers in their 89-33 victory over Holton, to set a new single-game state record for a girls team.
Five different Eagles scored from beyond the arc, led by Zara Weber with 10 triples, Jenna Harrison with eight, and Kenzie Bowers with five. The team had 63 attempts in the game.
Harrison got things rolling by hitting six 3-pointers in the first quarter alone, and the momentum built from there.
“It was just a good night,” said Weber, a senior. “If one girl starts to hit, then the next girl does, and it just keeps on going. It’s definitely contagious.”
Weber led Kent City with 30 points in the game, Harrison added 26 and Bowers scored 21.
“The girls shot crazy,” Carlson said. “They just started out on fire – 10 in the first quarter, another eight in the second. When they started going, they really started going.”
“The team we played just left us open in the first half, and we kept making them,” Weber said. 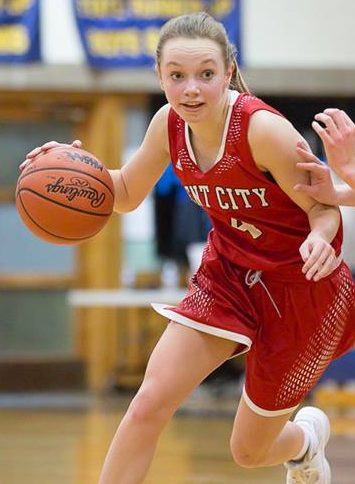 Amazingly, this sort of thing is not rare at Kent City. The Eagles actually broke their own state record of 23 triples, set in a game in 2013. They also own third place on the state record list, with 18 3’s in one game in 2015.
Whitmore Lake holds the single-game boys record with 29.
So long-range shooting is obviously a top focus in practice for Kent City, and has been for some time.
“The girls work really hard on shooting and their shooting form,” said Carlson, whose team is averaging an impressive 62 points per game through 10 games. “We stress that. The girls take it to heart and work on it. We’ve had a lot of really good shooters come through our program.
“This team (this year) has an incredible number of great shooters. We have five who can really shoot it.” 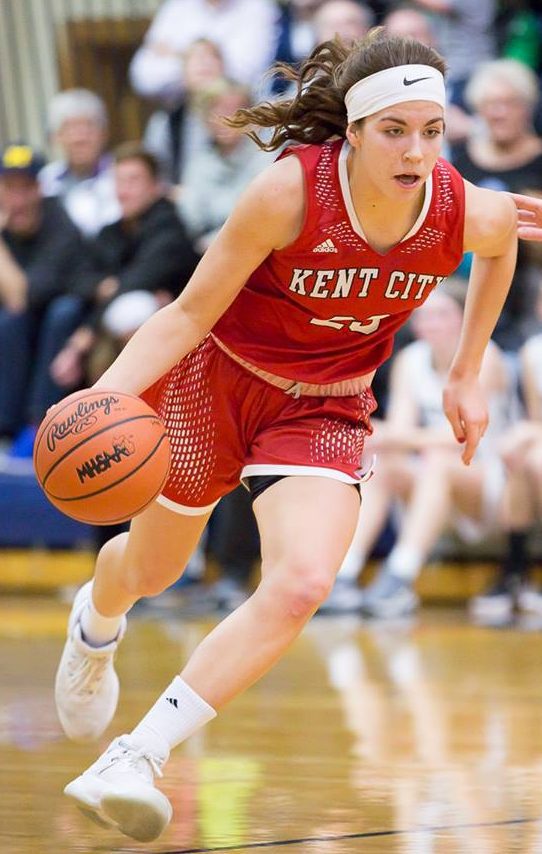 The Kent City girls program has been very successful in recent years, winning conference championships in seven of the past nine seasons, including four in a row since the school joined the Central State Activities Association.
Last year the Eagles advanced all the way to the Class C state quarterfinals, and returned all five starters this season.
So it’s no surprise that Kent City is currently 8-2 overall and 5-0 in conference play. The Eagles have their sights firmly set on winning yet another conference title and having another long run in the postseason.
“I think things are going pretty good,” Weber said. “We put in a few new things in the beginning, and it’s coming together really well. We’re really excited about this season.”
One of the Eagles’ two losses this season came by one point to Detroit Martin Luther King, which was undefeated and ranked 10th in the state in Class A at the time.
Not coincidently, the Eagles were very cold from 3-point land that night, making only 5 of 35 attempts.
“We could have used a few of those three’s from Friday,” Carlson said.

Mona Shores boys build big lead, then hold on for a 66-63 win over Zeeland East