Lumberjacks lay an egg in front of sellout crowd, fall 5-1 to Youngstown Phantoms

By Steve Gunn and Dave Hart
LocalSportsJournal.com
MUSKEGON – Muskegon Lumberjacks fans certainly have nothing to complain about this season.

Going into Saturday’s home game against the Youngstown Phantoms, the Jacks had a sterling 12-4 record on L.C. Walker Arena ice.
They were due to lay an egg one of these games.
Still it a was shame it happened on Saturday, in front of a sellout crowd of 3,511 fans, when the first-place Lumberjacks were shot down by the fourth-place Youngstown Phantoms, 5-1. 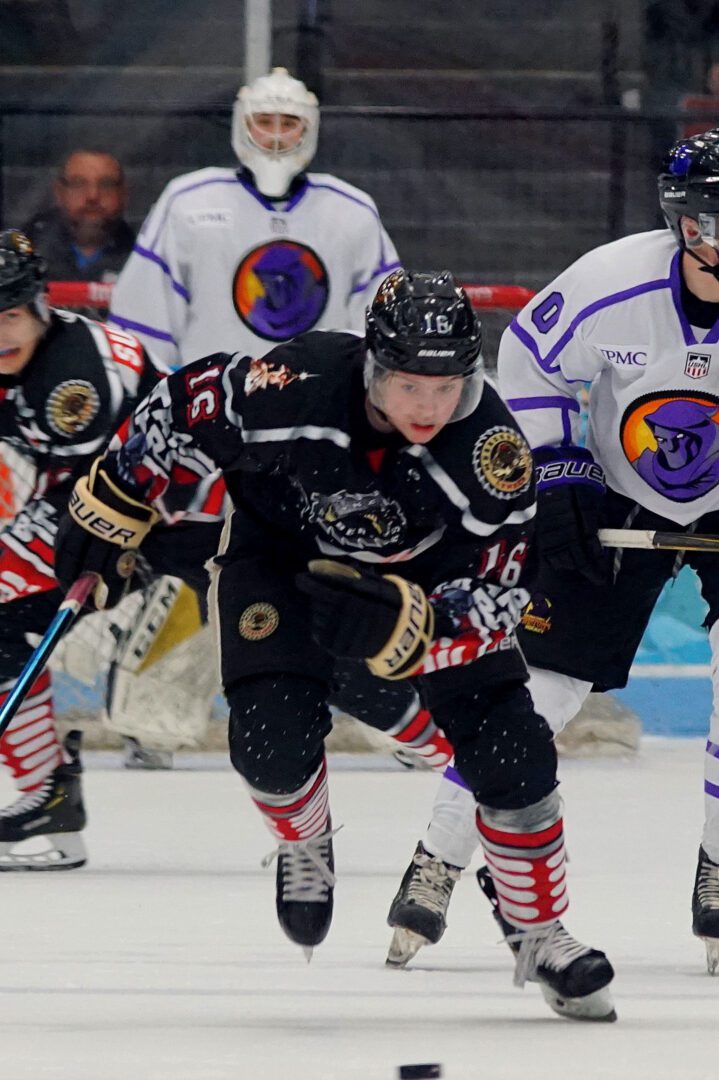 Oliver Macdonald chases down the puck for Muskegon. Photo/Leo Valdez

The Lumberjacks are 24-7-1 on the season and in first place in the USHL’s Eastern Conference. They entered the night 12 points (six wins) ahead of second-place Chicago.
The Jacks will try to snap out of their slumber with a Sunday matinee home game against Central Illinois at 3:15 p.m.
“We had a great crowd and we didn’t really do anything to give them excitement in regards to scoring goals,” said Lumberjacks coach Mike Hamilton. “It was an opportunity wasted on our end, but I don’t think we were terrible. We generated a lot of chances, but we are not getting to the net. At the end of the day we played a decent hockey team and every mistake we paid for today.”
A big part of the Lumberjacks’ problem was Youngstown goalie Chad Veltri. The Jacks had a 41-30 advantage in shots, but Veltri turned away just about everything, and kept the Jacks from finding the net on two power play opportunities.
Youngstown scored twice on four power plays.
“Their goalie played very well, and they have been playing very well (as a team) lately,” Hamilton said.
Muskegon starting goalie Brandon Bussi had an uncharacteristically bad night, giving up four goals in 27 minutes. He was pulled at 17:54 of the second period. Backup Ryan McInchak finished the game and only allowed one goal.
Bussi’s record fell to a still outstanding 23-5-1.

“I think Bussi would like to have this one back, but he has been so good for us that we expect excellence all the time, and this time he was a little off.”
Youngstown led 3-0 after the first period after collecting goals from Connor MacEachern, Matt DeMelis and Gianfranco Cassaro.
Jack Malone and Brett Murray added goals for the Phantoms in the second period, and the visitors led 5-0 heading into the third.
Muskegon fans finally got something to cheer about with 47 seconds left in the game when Bobby Lynch scored his 14th goal of the season, with assists by Igor Larionov and Matt Staudacher.
The late goal saved the Jacks from suffering their second shutout of the season. 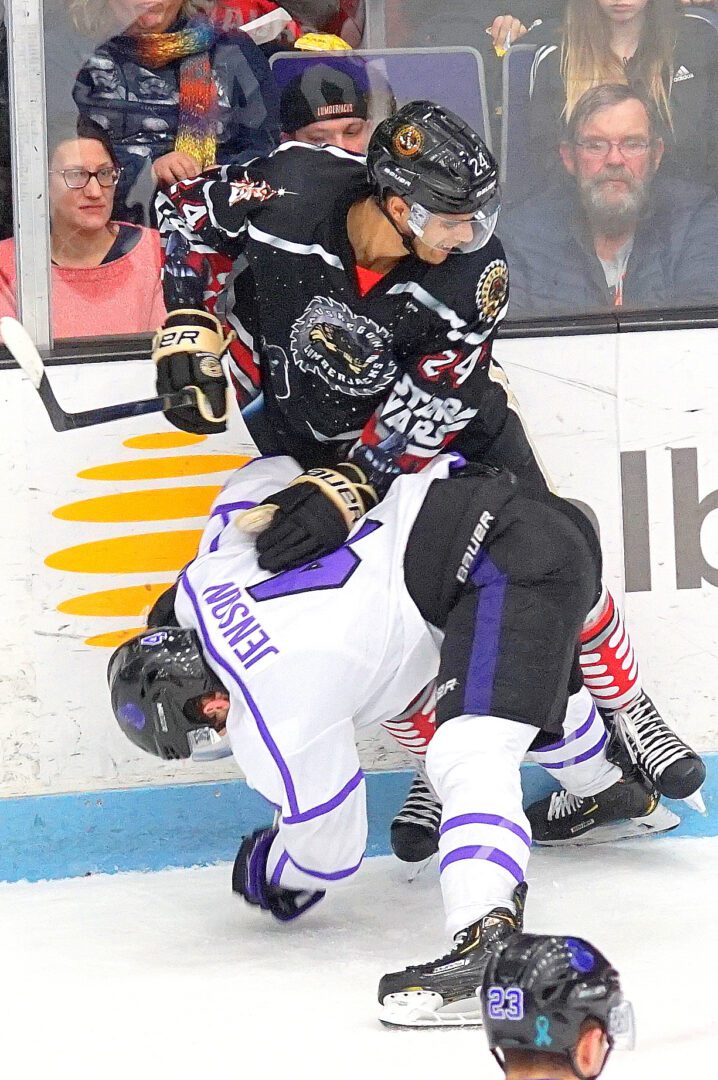 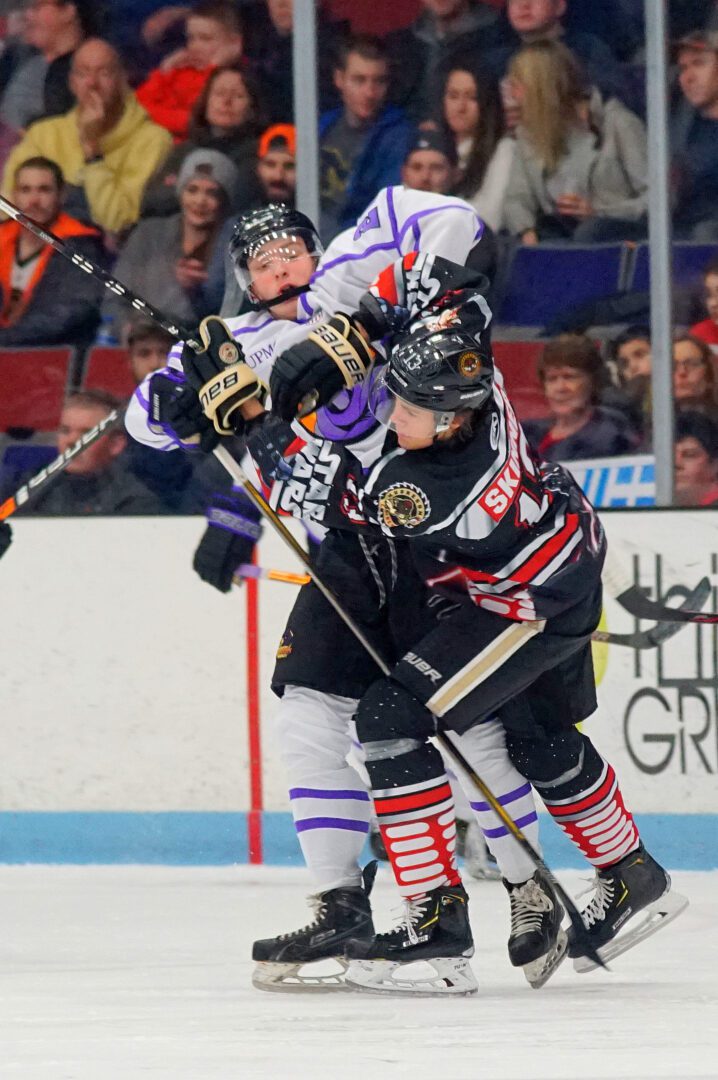 Hunter Skinner gets tangled near the boards for Muskegon. Photo/Leo Valdez