By Dave Hart
LocalSportsJournal.com
MUSKEGON – The Muskegon Lumberjacks finished off an incredible 2018 calendar year on New Year’s Eve on Monday night at the L.C. Walker Arena.

The Lumberjacks sizzled back in January through April, which propelled Muskegon to a third place finish after starting the season off slow and out of the postseason race.
Muskegon continued its success this season in 2018, posting 23 victories while having a comfortable lead for first place in the Eastern Conference. 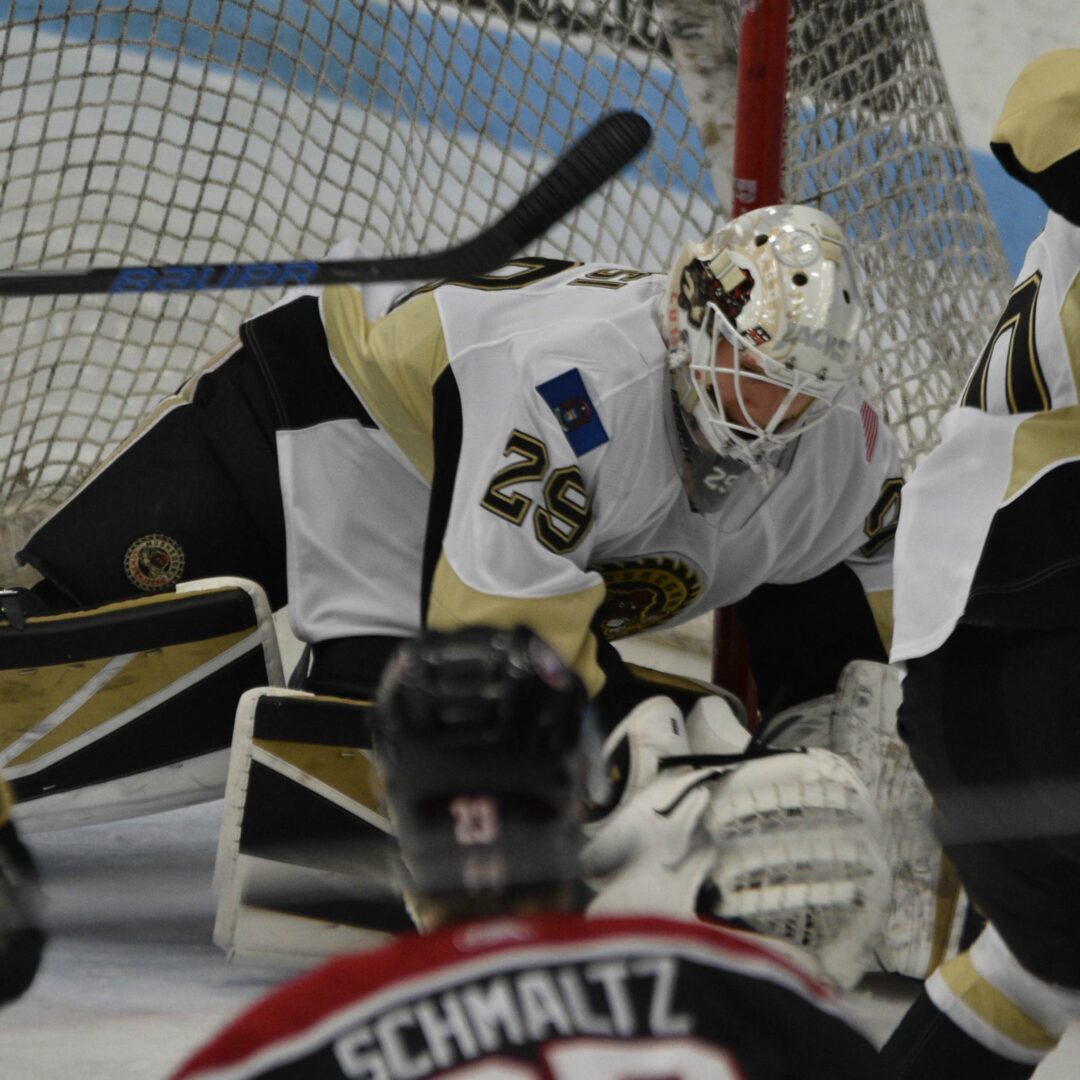 Muskegon Goalie Brandon Bussi covers up the puck after making 1 of his 29 saves on the night. Photo/Mitchell Dixon MSD Photography

The Lumberjacks extended their lead in the conference with a 2-0 victory over the Chicago Steel in front of 2,852 fans in attendance, who were ringing in the New Year watching their hometown hockey team.
From January 1 through Dec. 31, Muskegon posted an outstanding 45-21-1 record throughout the 2018 year.
The Lumberjacks are now 23-5-1 on the season, good for 47 points and first place in the USHL’s Eastern Conference. Muskegon currently has a 14-point lead over second place Chicago.
Muskegon will open the 2019 portion of its schedule next Friday and Saturday on the road against the Cedar Rapids Roughriders. Both games are slated to start at 8:05 p.m. EST.
“It’s great to have success but we have been blessed with some great hockey players who work hard and compete,” said Lumberjacks coach Mike Hamilton. “You can make it a 3-on-3 game against each other and they’d fight and someone would be bleeding because they all want to win so badly.
“It has been a great start for us but we have a lot of work to do. We need to improve and our ultimate goal is to make a deep run at the end of the season.”
Brandon Bussi was once again outstanding for the Lumberjacks in net, stopping all 28 shots faced while collecting his sixth shutout of the season. 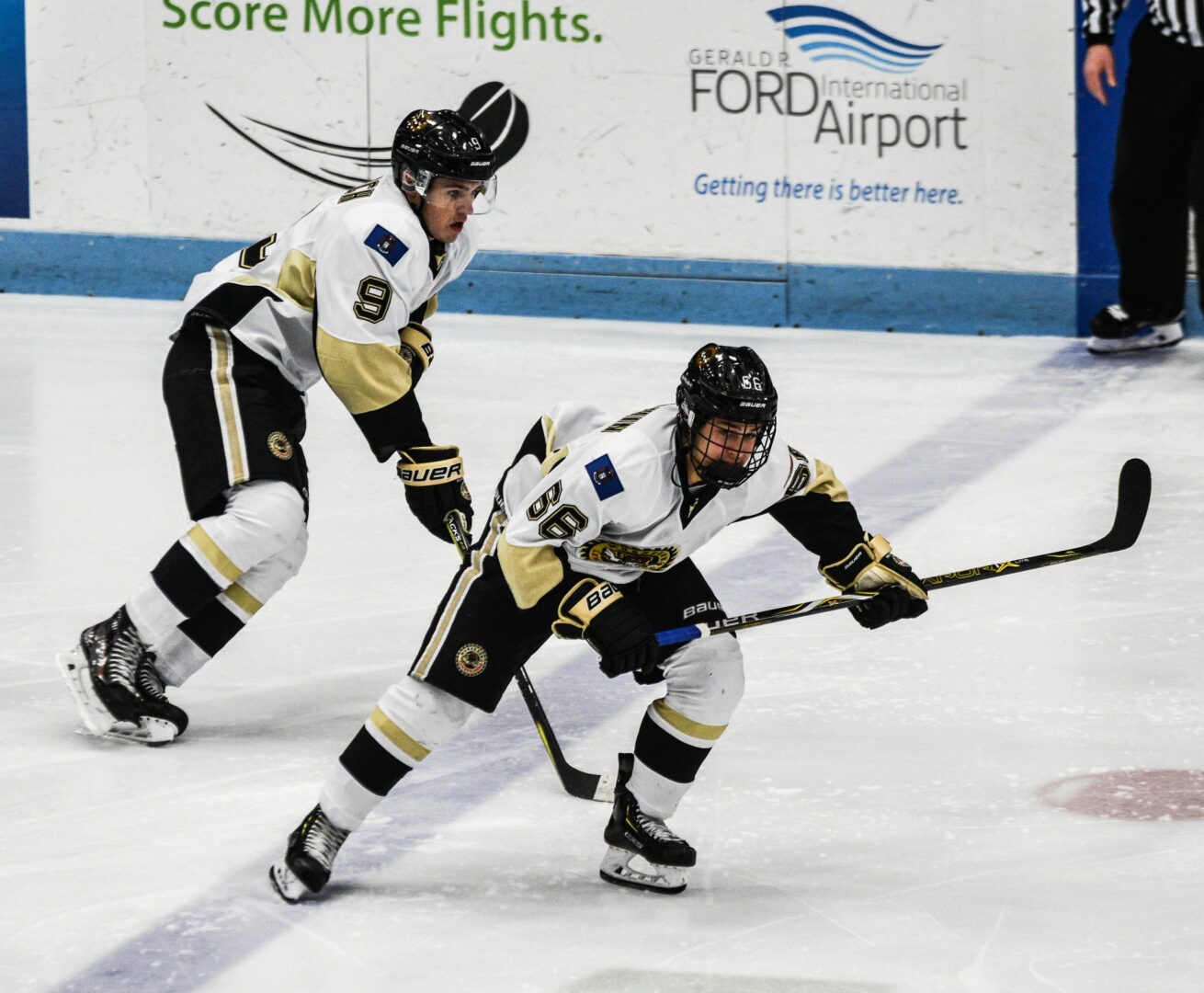 Bobby Lynch moves the puck out of the Muskegon zone as No. 66 Danil Gushchin leads up ice. Photo/Mitchell Dixon MSD Photography

“Chicago really stepped up from the last time we played them,” said Bussi. “They made some roster moves and became a better team. It was a huge challenge but I think we stepped up to the call and that was a big win for us.”
Both Teams were held scoreless during the first period with Chicago outshooting the Lumberjacks by a 9-7 margin.
The Lumberjacks finally ended the scoring drought at the 14:14 mark of the second period with a goal from Egor Afanasyev to give Muskegon a 1-0 advantage.
Muskegon nursed its one-goal lead until the 18:49 mark of the third period when Nolan Sullivan found the back of the net on an empty net tally.
The Lumberjacks outshot Chicago by a slim 29-28 margin and did not have one power play opportunity during the game.
Chicago failed to score on all three of its power play chances.