Johnson played for Core in high school, and later coached on his staff for a season.
Now the two coaches go head-to-head in a non-conference game every year, and until this season the teacher had always got the best of the student.
But that changed on Tuesday, when Johnson’s red-hot Rockets won their 10th straight game with a 59-40 victory over Spring Lake on their home court.
Core had some nice things to say about Johnson after the game. 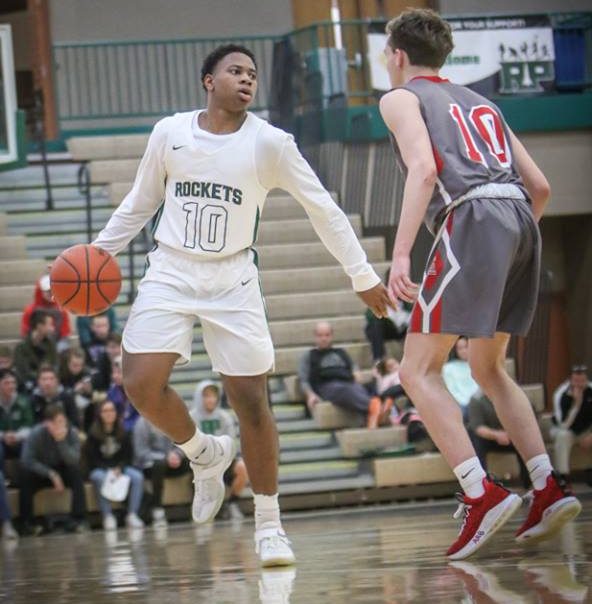 “In high school as a player and student he was one of the quieter kids in the halls and on the court,” the longtime Laker coach said. “But now you see him with that big broad voice of his, and it takes me aback a bit, like this isn’t the same kid from high school. He’s got some great leadership qualities.”
The respect is shared.
“Coach Core is the most organized guy I know,” Johnson said. “He came super prepared for every game, and I try to emulate that with my coaching.”
That’s starting to become obvious with the way the Rockets, now 12-1, are performing this season.
Neither team could get an edge in the first quarter, and Reeths-Puffer took an 11-9 lead into the second.
But the Rockets came out hot in the second, outscoring the Lakers 16-4 and going into the break with a 27-13 lead.
“We just weren’t knocking down any shots in the first,” Johnson said. “We finally knocked those open shots down and our defense kept playing great.” 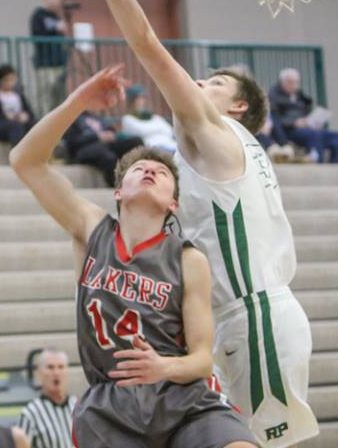 In the third quarter it was more of the same for the Rockets, who opened the second half with an 11-3 run and had a 46-24 edge after three quarters.
The Laker shooters got hot in the fourth, knocking down four triples, but it wasn’t enough as the Rockets cruised to the victory.
The Rockets were led by sophomore guard Kalil Stimage with 14 points while senior Carter Fulton added nine.
Even with his team’s great start, Coach Johnson is looking for a better rebounding effort from his players.
“That’s probably the one spot we need to tighten up with,” Johnson said. “Gary Humphrey is tough down low grabbing boards, but we need more than just him. Everybody needs to make it a priority out there.”
Core credited the Reeths-Puffer defense with shutting down Laker big man Lucas Lyyski, who was held to just four points in the contest.
“They got really physical with him and it was tough,” Core said. “His frame right now is built to deal with that kind of pressure, but it was certainly a good lesson for us.”
The Lakers were led by Grant Klieft and Cayden Ball with 12 and 11 points, respectively. The Lakers fell to 4-9 on the season.