MUSKEGON – A return to the friendly confines of L. C. Walker Arena was all the Muskegon

A night after a disappointing 6-1 loss in Chicago, Muskegon found its offense and rolled to a 5-3 victory over Sioux Falls Saturday in front of 3,283 fans.

The two teams will face off again in Muskegon on Sunday at 3:15 p.m.

The first-place Lumberjacks improved to 31-10-3 on the season, good for 65 points and a 10-point lead over second-place Chicago in the USHL’s Eastern Conference. 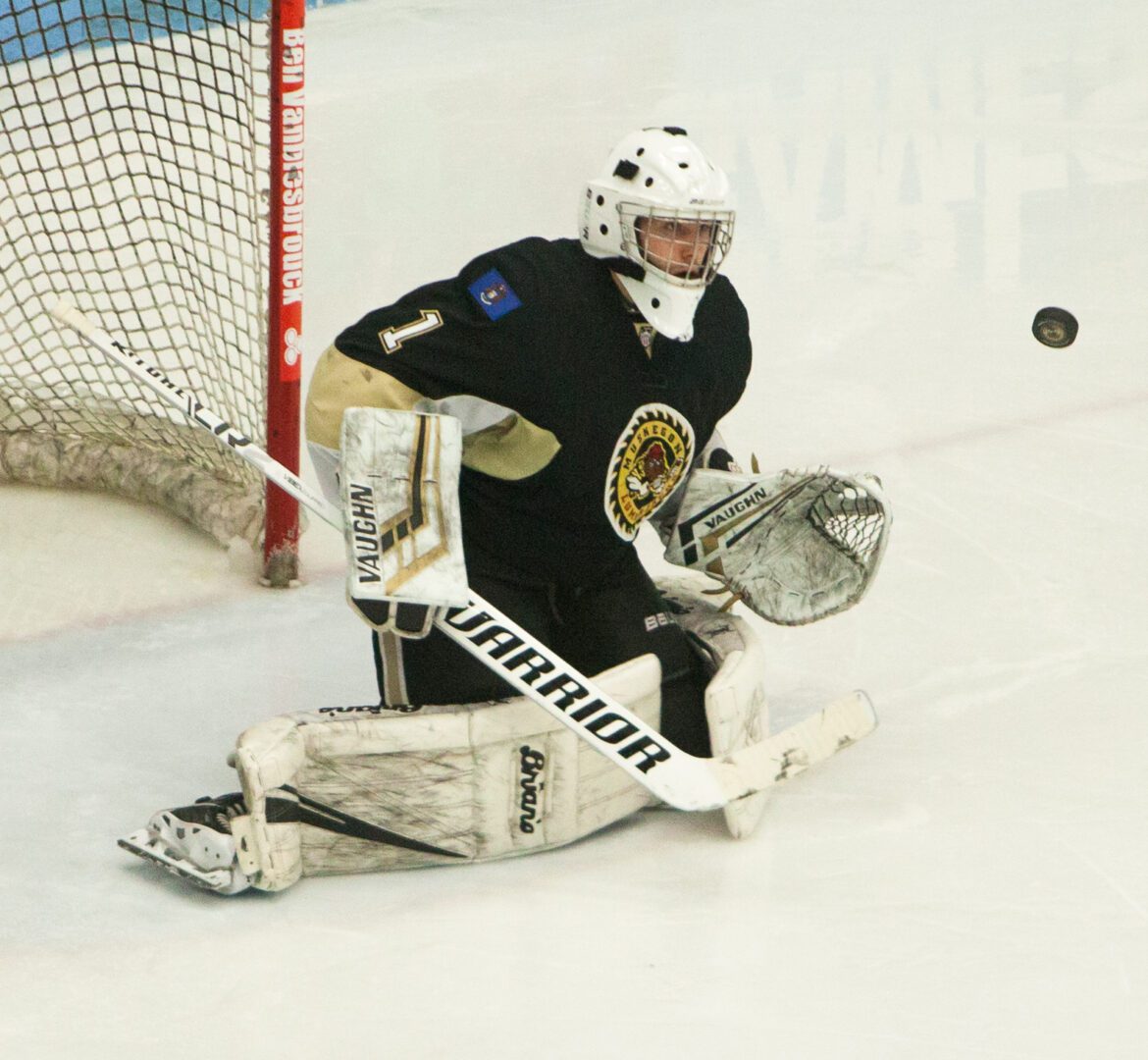 Goalie Ryan Mcinchak posts the save for Muskegon. Photo/Jason Goorman

Muskegon scored early in each period, starting with Nolan Sullivan’s 15th of the season just 3:41 into the game.

A five-minute major penalty on Sioux Falls gave the Jacks an extended power play two minutes later, resulting in a goal by Max Ellis for a 2-0 lead.

“We only got one goal out of it, but I will take that every time,” Muskegon coach Mike Hamilton said about the long power play. “If you’re scoring at a 20-percent clip on the power play, that’s a good thing.”

The Stampede answered quickly, cutting the Jacks’ lead to 2-1 on Max Crozier’s goal a minute after the penalty expired.

Less than a minute later, Sioux Falls’ Anthony Romano looked as if he had tied the game when he deflected a shot into the Muskegon net.

But a replay review showed that Romano used his skate to direct the puck into the net, and the goal was waved off,  leaving the score at 2-1 after one period. 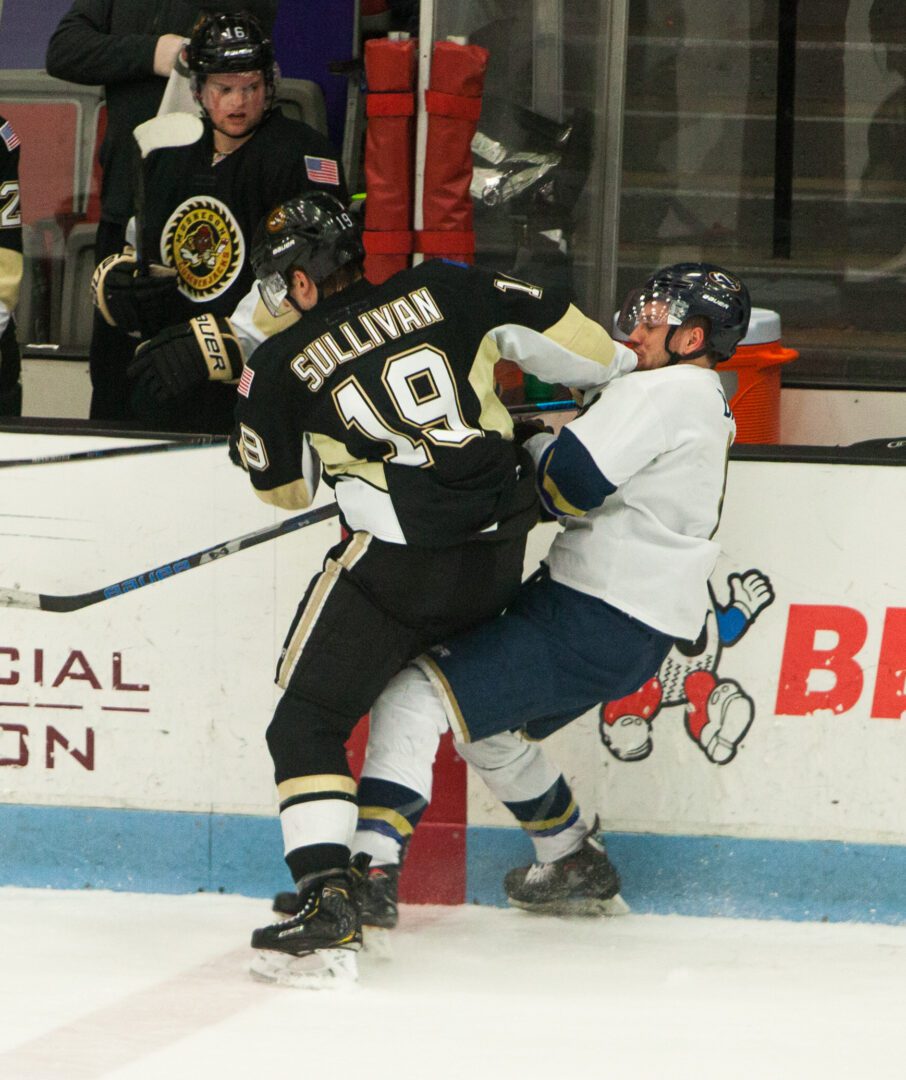 Muskegon took a 3-1 lead just 54 seconds into the second period when Nash Nienhaus netted his second goal of the year.

Egor Afanasyev scored his 21st goal of the year at the 18:23 mark and the Lumberjacks led 4-1 after two periods.

Alex Gaffney scored from in front of the net 1:44 into the third period, and the Jacks increased the lead to 5-1.

“The boys played real well today,” Hamilton said. “We had some real firepower out of the lineup (with injuries), but we had five different guys pitch in tonight and score.”

With 13:32 left to play, Brian Chambers scored and pulled the Stampede within 5-2. 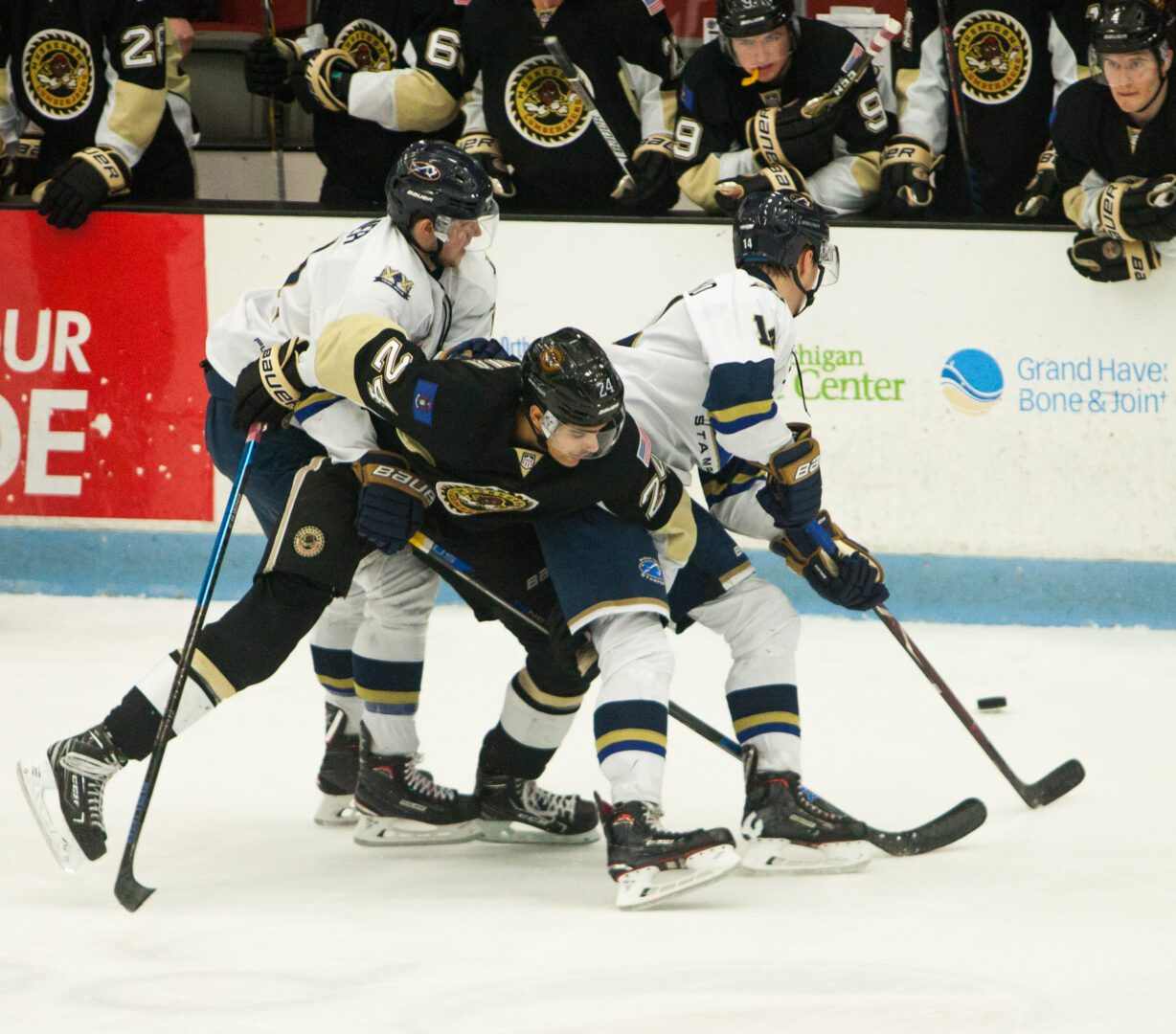 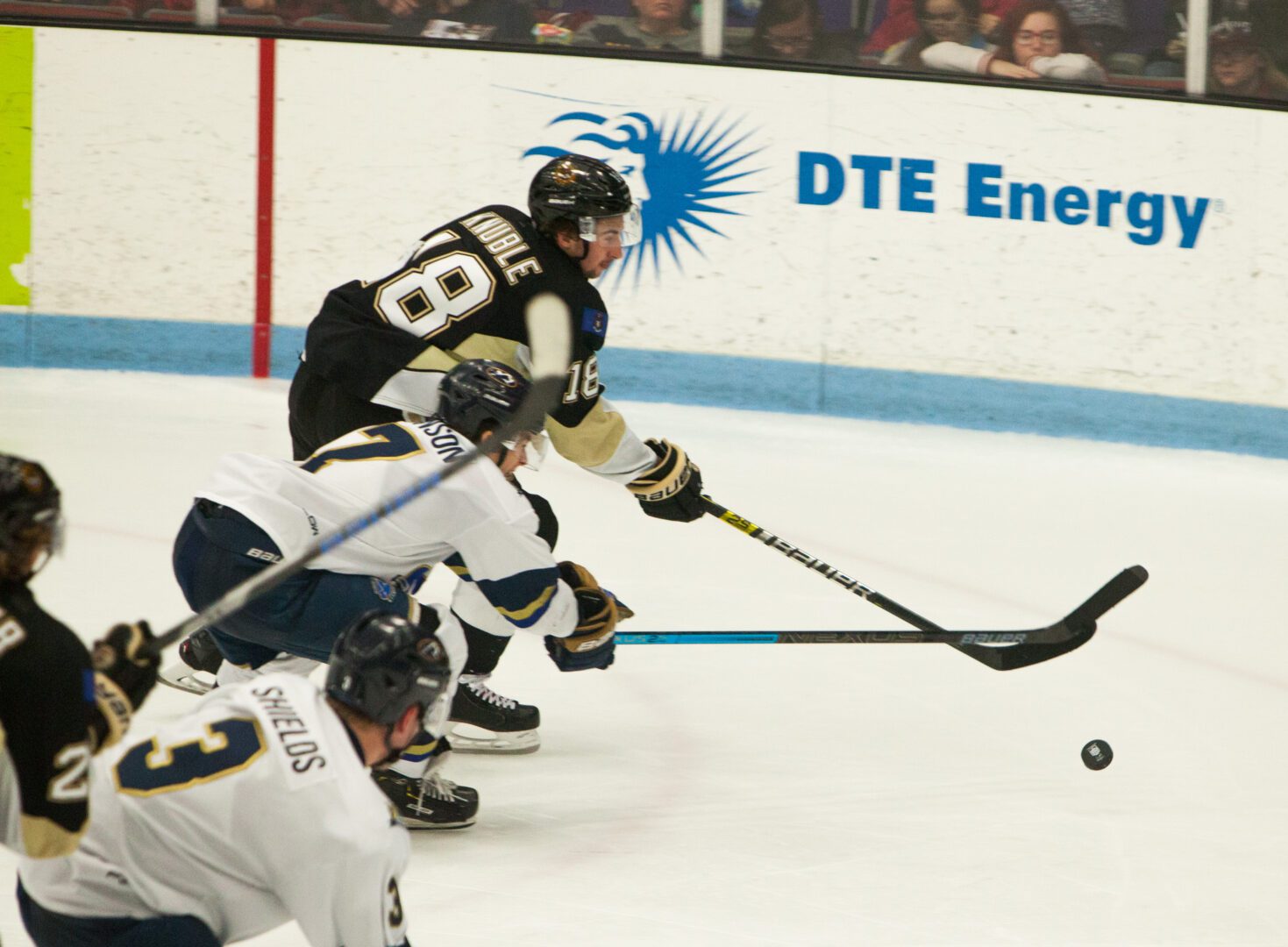 No. 18 Cam Knuble chases down a bouncing puck on a break towards the Sioux Falls goal. Photo/Jason Goorman 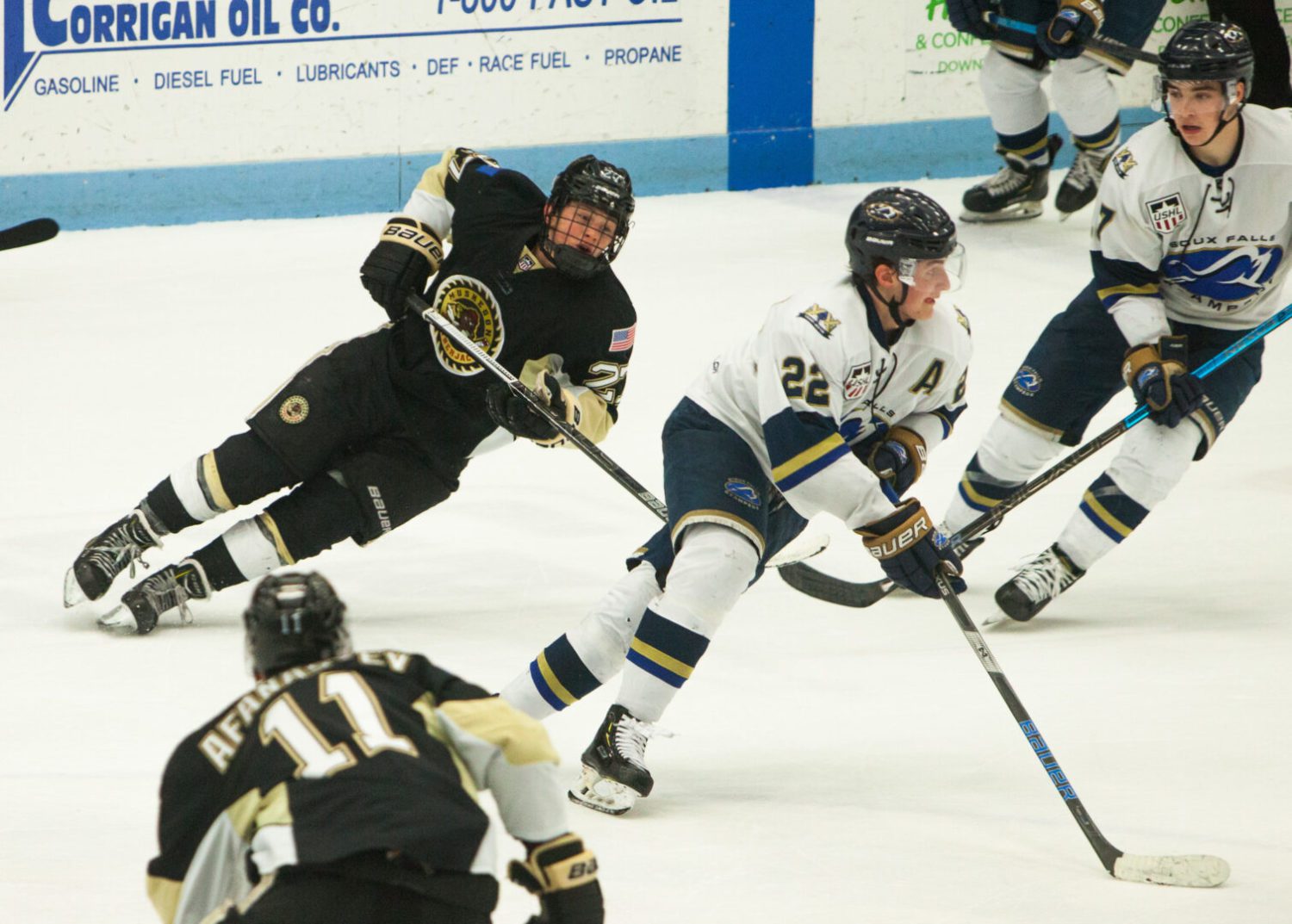 Muskegon’s No. 27 Alex Gaffney gets horizontal as he chases down Sioux Falls’ No. 22 Cade Borchardt. Photo/Jason Goorman 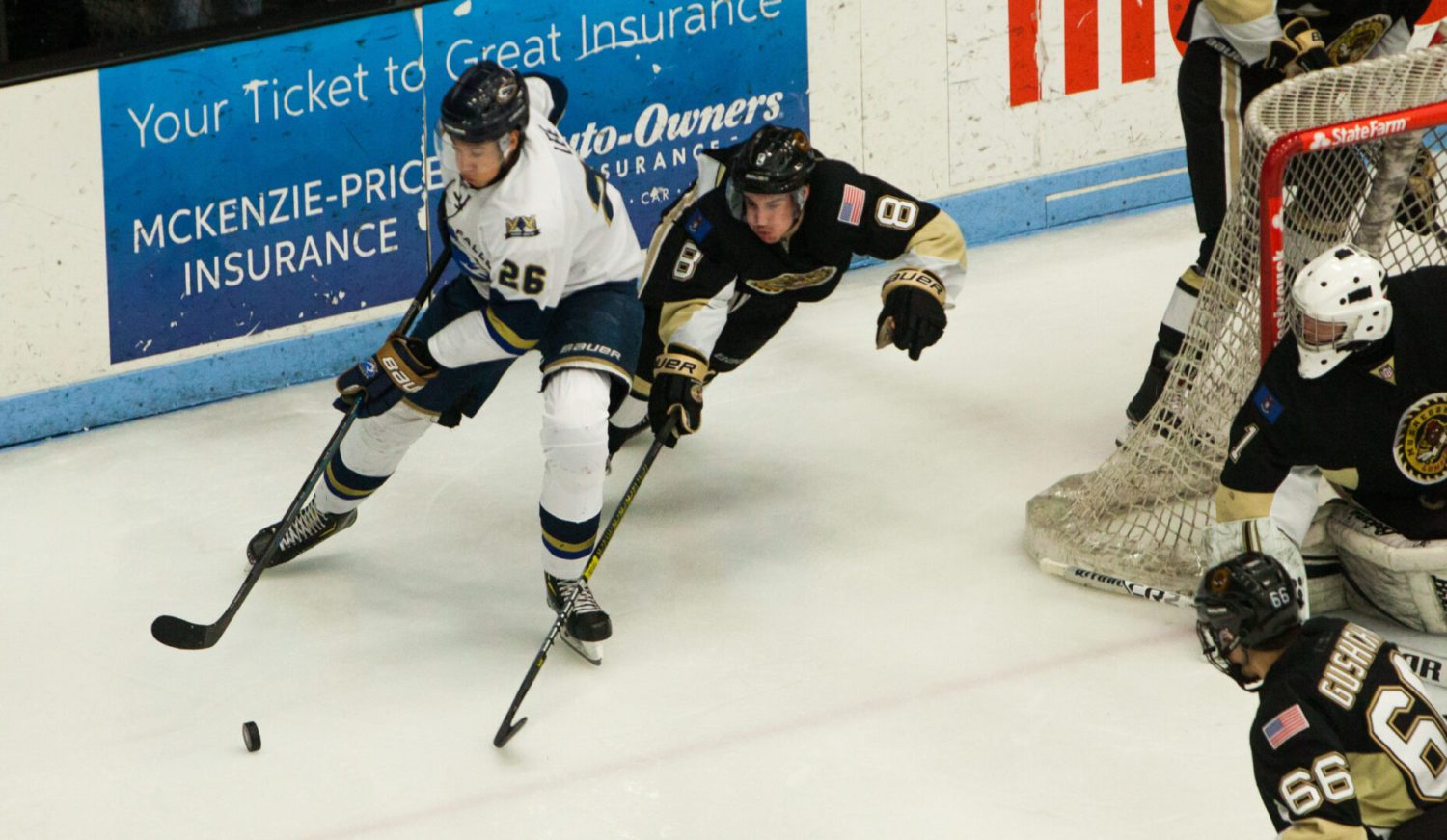 Muskegon’s Nash Nijenhuis looks to get his stick in front of Andre Lee. Photo/Jason Goorman 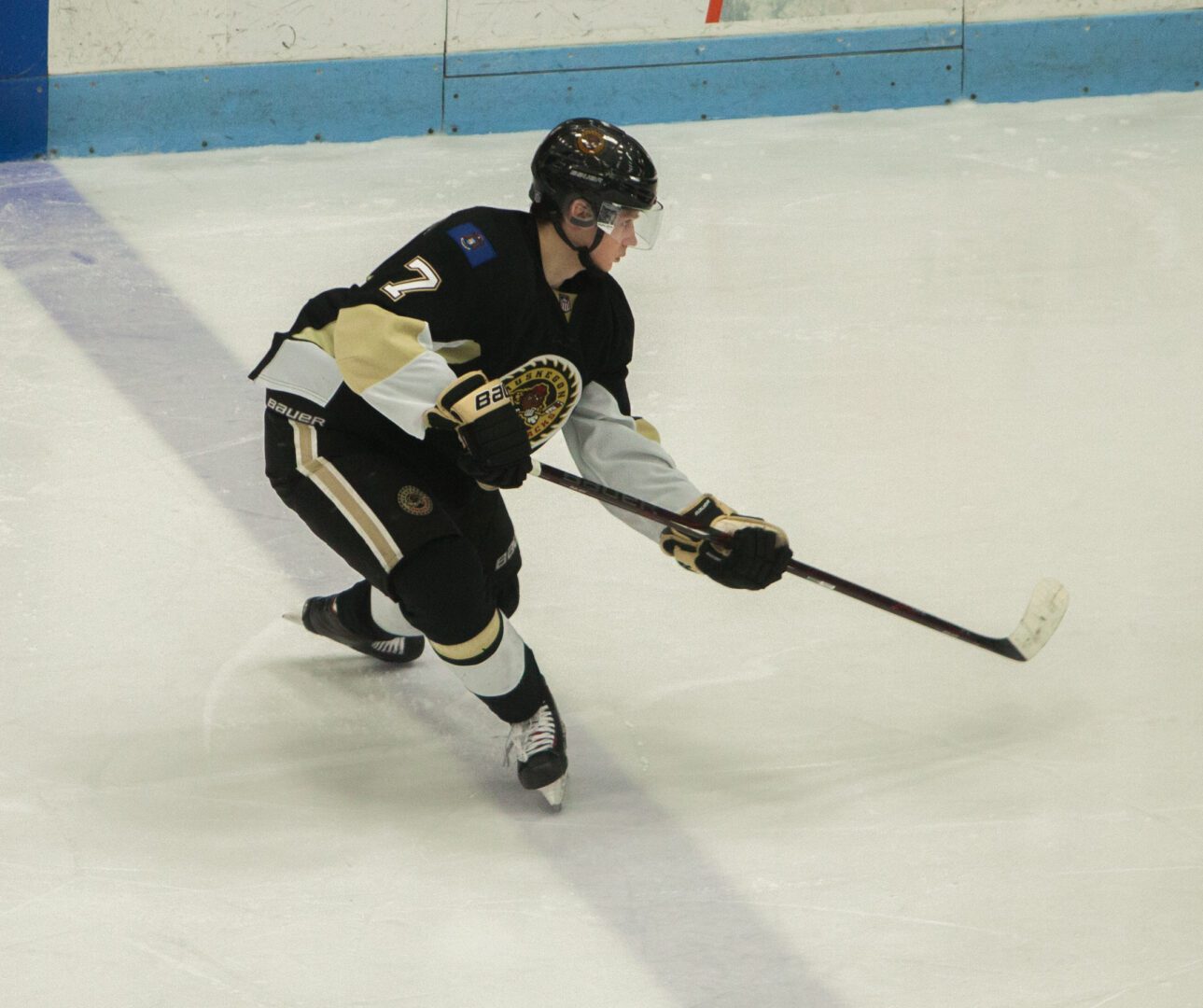 Alex Vakovenko follows through after his shot finds the back of the net for Muskegon. Photo/Jason Goorman