JENISON – Alyza Winston picked the right night to have the performance of her career.

Wildcats squad. If the Big Reds could pull it off, they would clinch the outright O-K Black Conference championship.

Winston made sure they did, tossing in a career-high 40 points to help the Big Reds gain a hard-fought 72-66 victory. 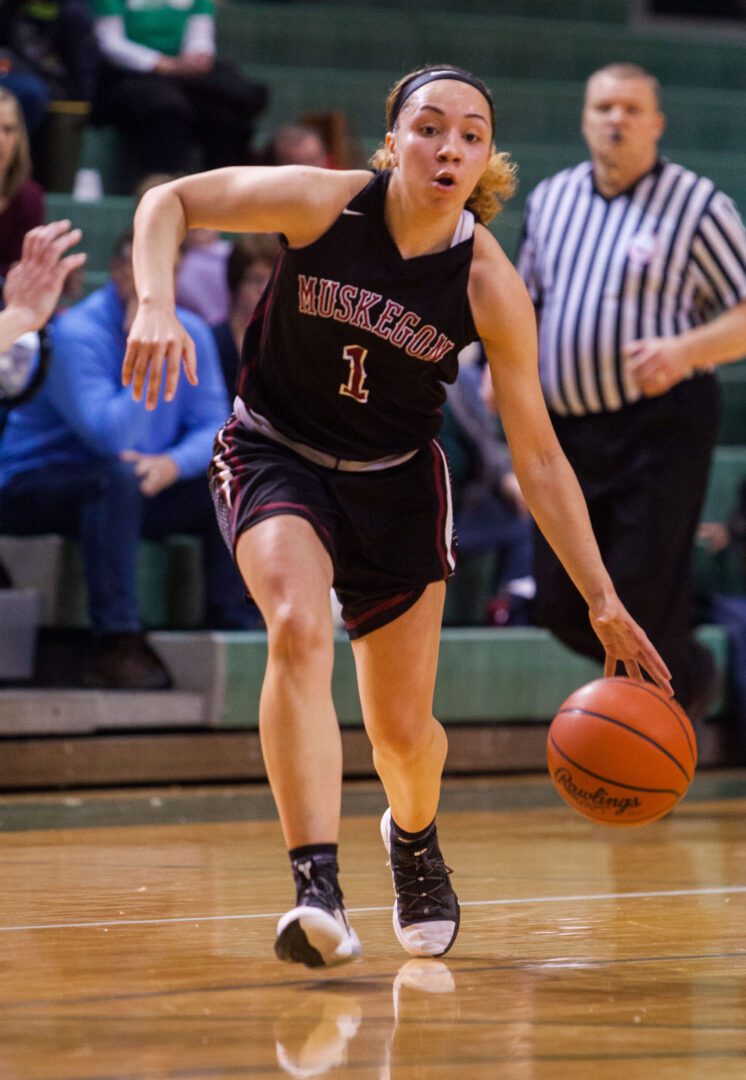 Alyza Winston drives into the lane for Muskegon. Photo/Jason Goorman

“It was easier than any game I’ve played this year,” said Winston about her ability to get to the basket. “I’ve been playing against them for years, and I don’t know if they changed their game plan or something, but it’s never been that easy for me to get to the basket like I did tonight.”

Muskegon Coach Rodney Walker believes that Winston’s performance was the result of all the hard work she’s put in to her game.

“She’s just a special talent,” Walker said. “Her accolades speak for themselves. Her hard work is paying off and you can really see it right now. She really played well tonight and shared the ball well, getting people open shots.”

Jenison came out hot, hitting 8 of 15 shots from the field in the first quarter and leading 21-16 at the buzzer. Winston had 10 points in the opening quarter for Muskegon.

The Big Reds counterpunched in the second quarter, outscoring Jenison 13-8 and tying the game 29-29 at halftime. Winston led Muskegon with seven points in the quarter while Brianna Alexander added four.

Both offenses exploded and scored 22 points in the third quarter, and the game was tied 51-15 headed into the fourth. Winston had eight points in the quarter while Alexander had six points on two three-pointers.

Over the final 1:10 of the game, Muskegon hit 10 of 12 free throws to clinch the victory and the conference championship. Winston hit her final two free throws with 11 seconds remaining to top off her 40-point performance.

“That was a big game,” Walker said. “I already knew it was going to be a tough game. Jenison probably has one of the best coaches in our conference, and I respect him a lot. Every year he game-plans well against us, and it’s always tough for us to come here and play.”

Following Winston in points was Alexander with 10 and Diynasti Dowell with seven. Jenison was paced by Ally VanTimmeren with 25 points and Morgen Mooney with 16.

While Winston and her teammates are happy to be conference champs, they still have a bigger goal in mind.

“Obviously it’s a great reward,” said Winston about the conference title. “But that’s not what we’re working for. We’re trying to get a state championship.” 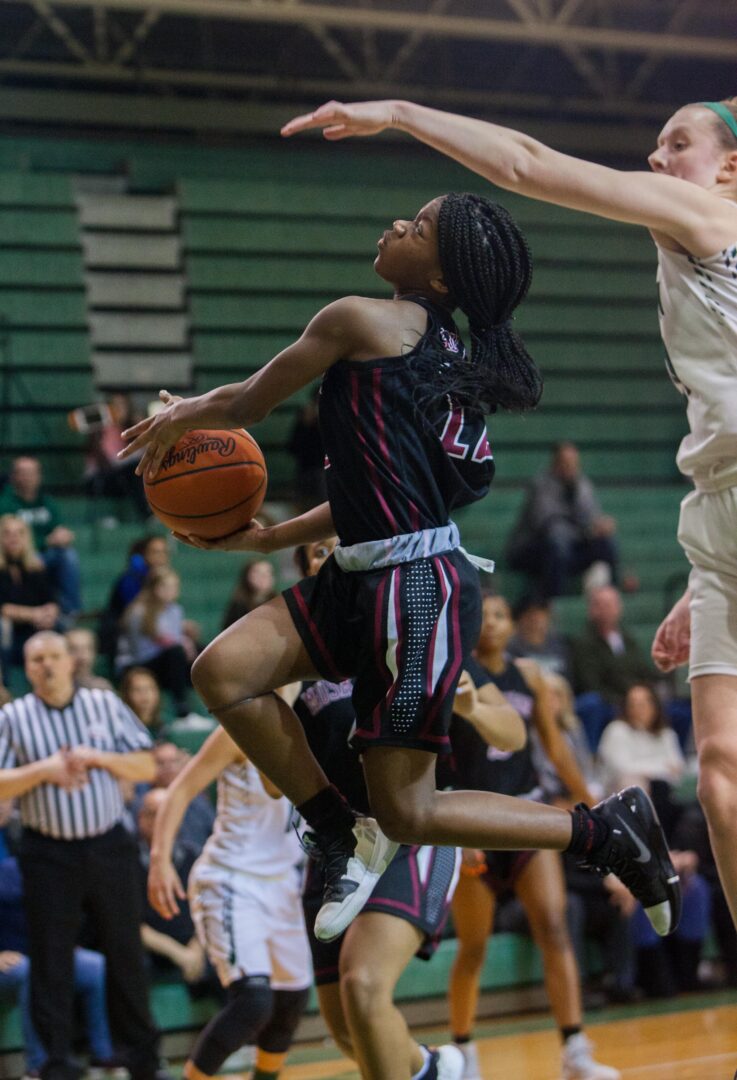 Brianna Alexander scoops a shot from under the hoop for Muskegon. Photo/Jason Goorman 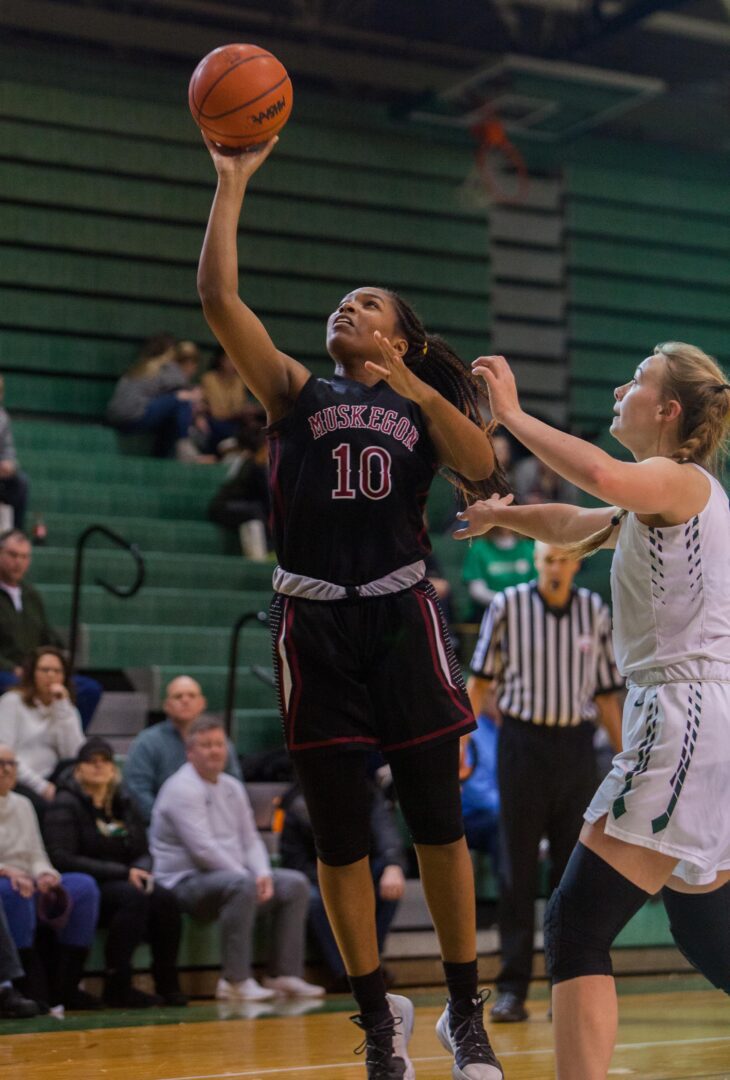 Kailyn Nash takes a shot from the post for Muskegon. Photo/Jason Goorman