MENDON – They say one of the big lessons kids learn from high school sports is persistence.

Student-athletes are taught that if they fail, even repeatedly, they have to keep fighting,

because success with eventually come – and it’s even more sweet when it finally happens.

The players on the Fruitport Calvary Christian girls basketball team have certainly learned that lesson.

Calvary has long had a successful program, with six district championships to brag about in the past six years. But for five straight years prior to this season they went to regionals, and came back without a trophy each time.

That finally changed on Wednesday, when the Eagles built an 11-point lead in the third quarter, then withstood a strong comeback by Mendon to claim a thrilling 49-46 victory over the Hornets and a Division 4 regional championship at Mendon High School. 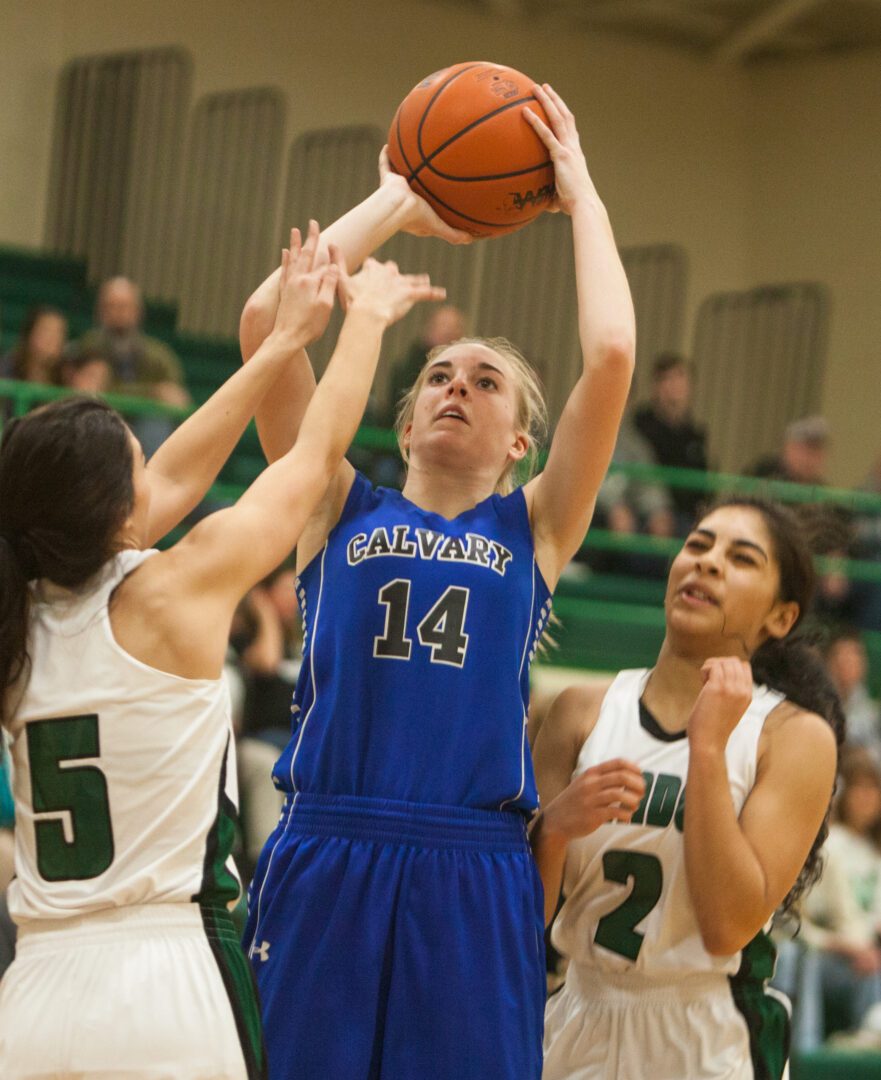 The heroes at the end were junior Lizzie Cammenga, who hit a putback off a missed three throw with 22 seconds remaining, and junior Kelsey Richards, who made up for a so-so shooting night with a pair of free throws with 22 seconds left.

Fruitport Calvary now advances to Tuesday’s Division 3 state quarterfinals against Adrian Lenawee Christian at Richland Gull Lake High School at 7 p.m. It will be the school’s first state quarterfinal appearance in any sport.

For veteran Fruitport Calvary Coach Brad Richards, the regional title was a reward for years of working hard and pushing his players to improve every season, and maintain their patience in their pursuit of excellence.

“These girls won it tonight on sheer guts and willpower,” said an emotional Richards, whose team has actually been in the regional finals six times in the past eight years, and lost each time. “The things they are talented at didn’t always show up tonight, but they found a way to win against a good Mendon team.”

Richard credited the entire Fruitport Calvary Christian community – students and parents, who made the long drive to Mendon in big numbers – for sticking with his team despite year after year of disappointment in regionals.

“This is the sixth time they’ve come to a regional championship game, and the last five haven’t gone so well, but the whole school showed perseverance,” he said. “You can’t quit in life, you have to keep fighting.”

Both teams missed a lot of shots in the first half, but Calvary was a little better than Mendon. 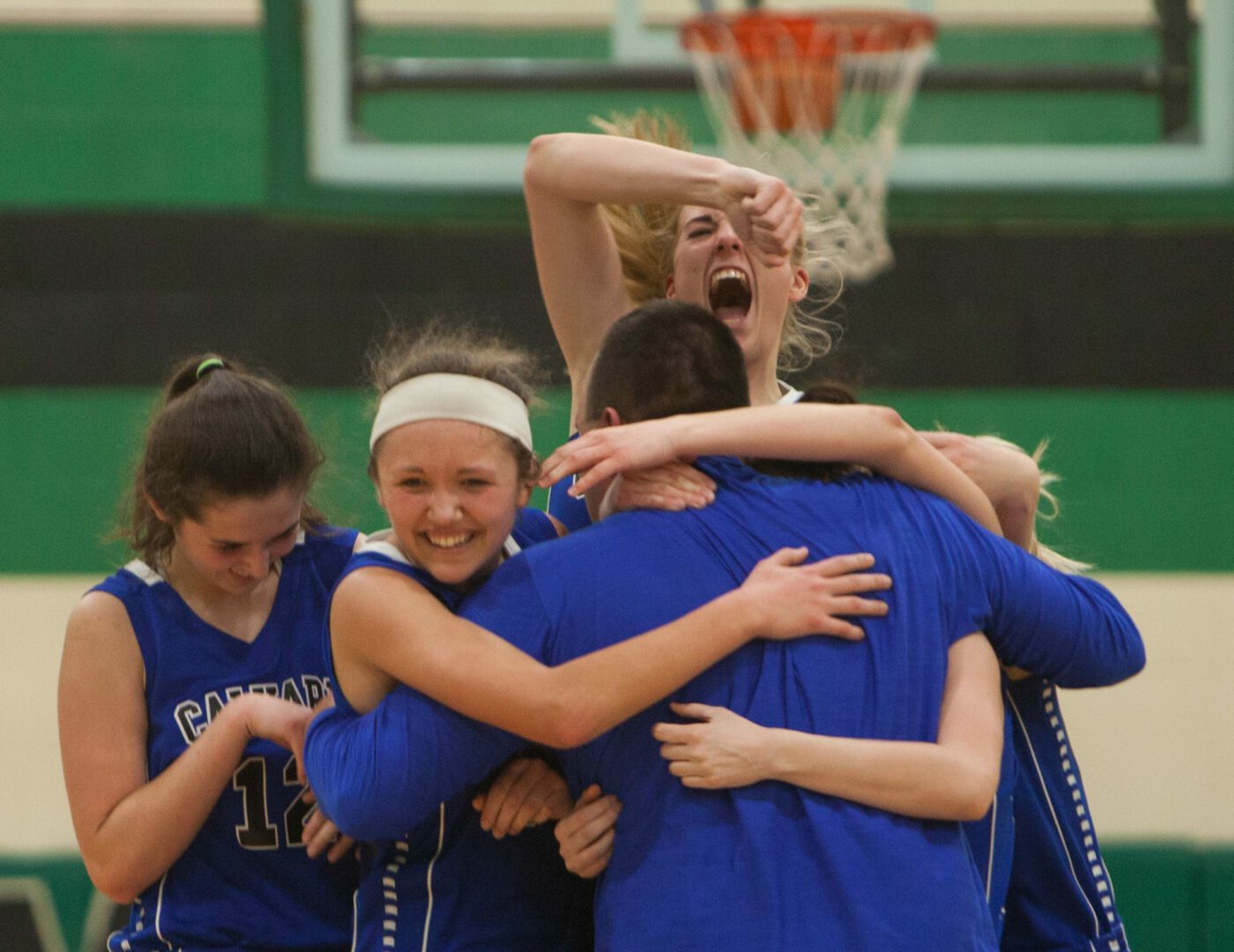 Four different Eagles scored baskets in the first quarter – including a triple by Kristina Warren – and Calvary led 11-9 at the first buzzer.

Kelsey Richards got hot in the second quarter, knocking down nine points, including a 3-pointer, and the Eagles had a 23-16 lead at halftime.

Mendon was hurt by 11 turnovers in the first half, many of them unforced.

The Eagles looked like they might pull away in the third quarter, when they had a 6-3 run, sparked by a 3-pointer and short jumper by Cammenga, and led 29-18 with 2:49.

Cammenga rolled up 10 points in the third, including two triples.

But then Mendon got hot, closing the third quarter with a 10-2 run, leaving Calvary with a 34-28 lead headed into the fourth.

Mendon opened the fourth quarter with a 6-1 run and pulled within a point, 35-34, with 6:37 left. The teams kept trading baskets the rest of the way, and the Hornets pulled within one point four more times, but were never quite able to wrestle away the lead.

Calvary led 45-44 with 57 seconds remaining. Kelsey Richards, the Eagles’ leading scorer, missed the front end of a 1-and-1 with 44 seconds left. But Cammenga snagged the rebound and calmly made a layup, giving Calvary a three-point cushion. 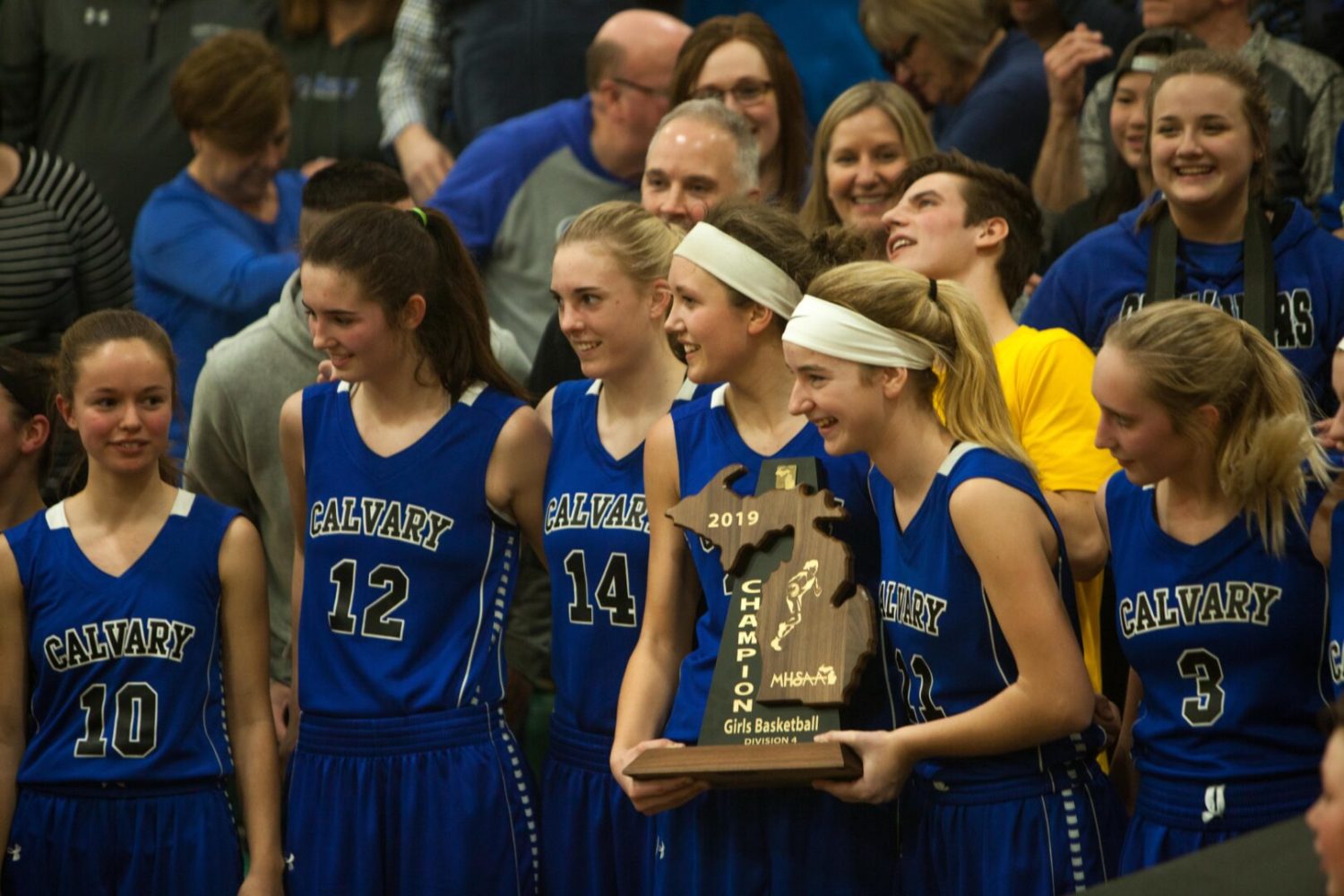 Mendon’s Cierra Nightingale answered with a layup with 25 seconds left, then Richards was fouled again and made both of her shots with 15 seconds remaining to give Calvary its final margin of victory.

Richards had seven points in the fourth quarter, Cammenga had five, and each tossed in a crucial 3-pointer to keep Mendon from pulling ahead.

Richards had another big moment a few ticks after her final free throws, when she stole the ball and went in for a layup, but the ball literally hung on the rim, against one side of the backboard, and did not come down until play was stopped and someone jumped up to jar it loose.

Richards was fouled on the play and missed both free throws with 12 seconds left, but her steal denied Mendon an important possession. The Hornets got off one more shot with four seconds remaining, but it missed the mark and Calvary escaped with the regional title.

Kelsey Richards finished with 21 points. Cammenga totaled 17, including 15 absolutely necessary points in the closely-contested second half. She had three triples in the game.

“The first half was a little bit rough for me, but I’m glad I got in the flow of things in the second half,” said Cammenga in the midst of the postgame celebration. “This is unbelievable. It’s so exciting.”

Newell finishes with 16 as Holton cruises past Hesperia 47-21