RAVENNA – The way the Kent City girls basketball team shoots the ball can turn even opposing coaches into fans.

“I told our girls, that’s one of the best Class C teams I’ve seen in years, so there’s nothing to hang your head about,” said Western Michigan Christian Coach Jeremy Goorman, following

this team’s 59-31 loss to the Eagles on Friday in the Division 3 district championship game at Ravenna High School.

“There’s not a lot of teams that can shoot like that at this level, boys or girls. It’s phenomenal. It’s almost fun to watch. So hats off to them. I hope they go all the way.”

Kent City reached the state quarterfinals a year ago with the same eight players that comprise this year’s rotation, and the Eagles hope they can go a few steps further this year. 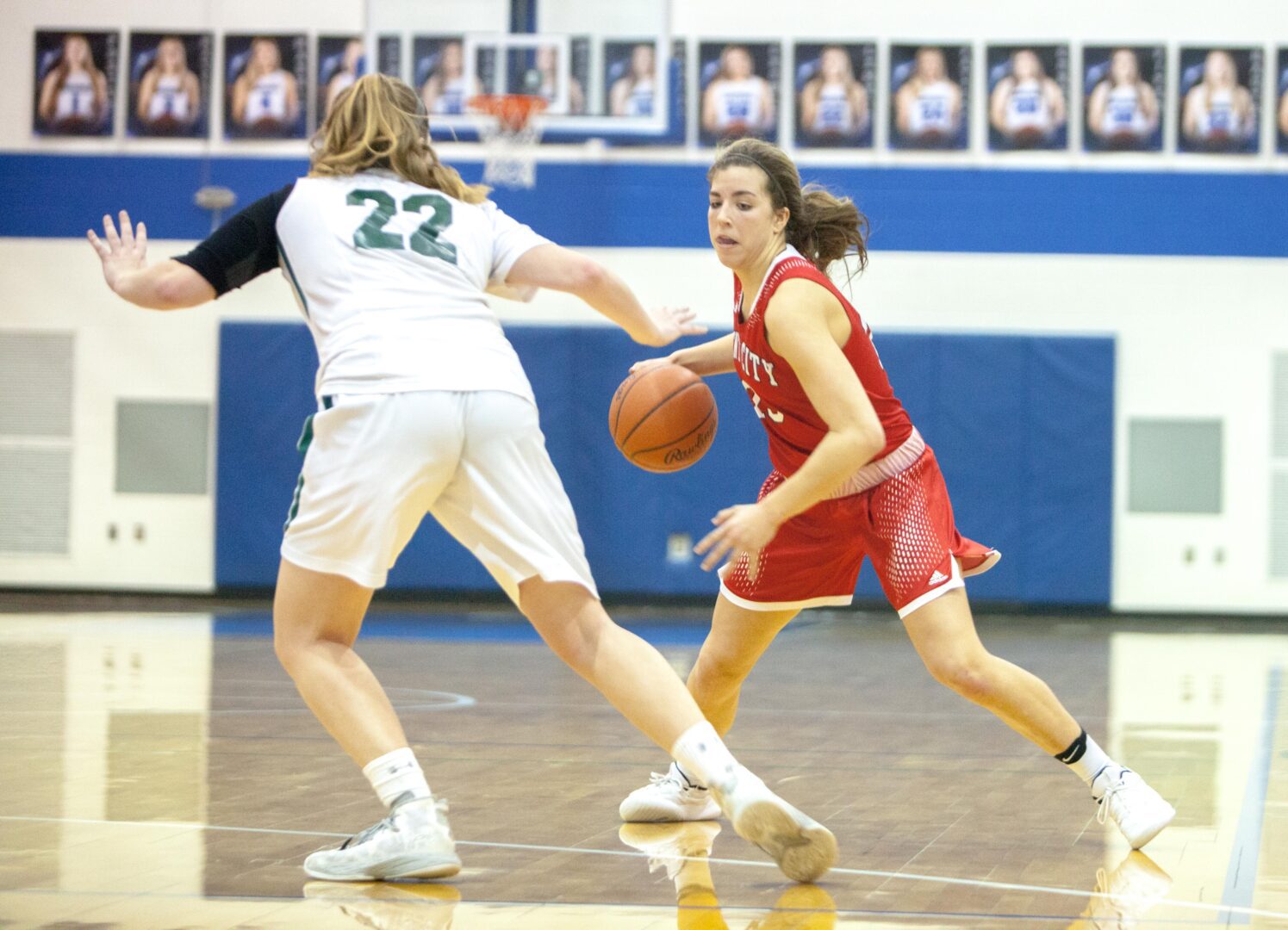 Kent City (19-4 overall) will get a doozy of a matchup in the semifinals on Tuesday, facing Pewamo-Westphalia, the No. 1-ranked team in the state, and the squad that eliminated the Eagles last season. The 7:30 p.m. game will be played on the Eagles’ home court.

“We’ve been paying attention (on who we might play),” said Kent City sophomore guard Jenna Harrison, who sank three of her team’s 12 three-pointers against the Warriors. “We lost to (Pewamo) in the quarterfinals, so we’re looking forward to it.”

Friday’s district title tilt against WMC was close for about the opening four minutes of the first quarter, then the Eagles began to pull away.

“We were able to set the tempo, that was the key,” said Kent City head coach Scott Carlson. “We wanted to pressure them and get it up and down in transition and see if they could keep up with that pace. We didn’t think they could.”

The Eagles blew the contest open in the second quarter, when they started to warm up from around the perimeter, and their mixture of full- and half-court pressure defense flustered WMC into 16 turnovers in the half.

Kent City had four triples in the first quarter and six more in the second to turn a 20-9 contest after one quarter into a 40-17 blowout at the break. 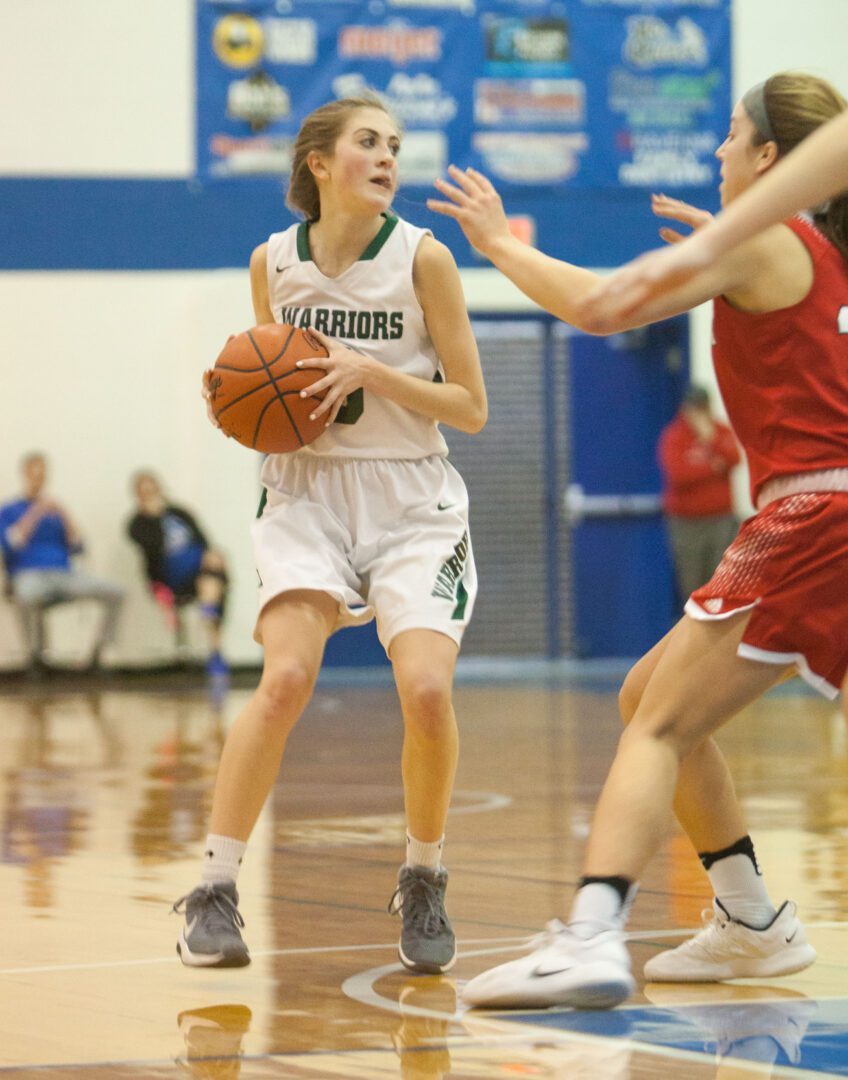 Meghan Heiss makes a jump stop at the elbow for WMC. Photo/Jason Goorman

“You can watch all the film in the world, but it’s a different story when you see them in person,” Goorman said.  “I don’t care who they play. You need four good guards (to defend them). To have five (good shooters) at a time, wow.”

The Eagles’ set a new single-game state record earlier this season in a win against Holton on Jan. 19, when they drained an amazing 25 three-pointers.

So it seemed almost uncharacteristic when the Eagles went nearly four minutes in the third quarter without a bucket, but the game never slipped away much. A triple by senior Janelle Krueger, and back-to-back buckets by sophomore Kenzie Bowers later in the third, helped restore order, and the Eagles took a 50-27 lead into the fourth.

“It’s going to happen, you just don’t know when,” Carlson said of his team’s three-point ability. “Ideally, I like us shooting 33 percent from three, 50 percent overall and 70 percent from the line. We’re capable of that.”

Kent City finished with four players scoring in double figures – Bowers with a team-high 16, Harrison’s 13, senior Zara Weber with 11, and 10 from Krueger, a senior who didn’t play the sport last season.

WMC ended its season with a 17-4 record. Goorman said the Warriors will lose only senior forward Anna Sytsema from this year’s squad. He told his team that if they want to reach Kent City’s level, they’ll have to put the work in during the off-season.

“Their shooting doesn’t happen by accident,” he said. “I just reminded them they have to put in the time.” 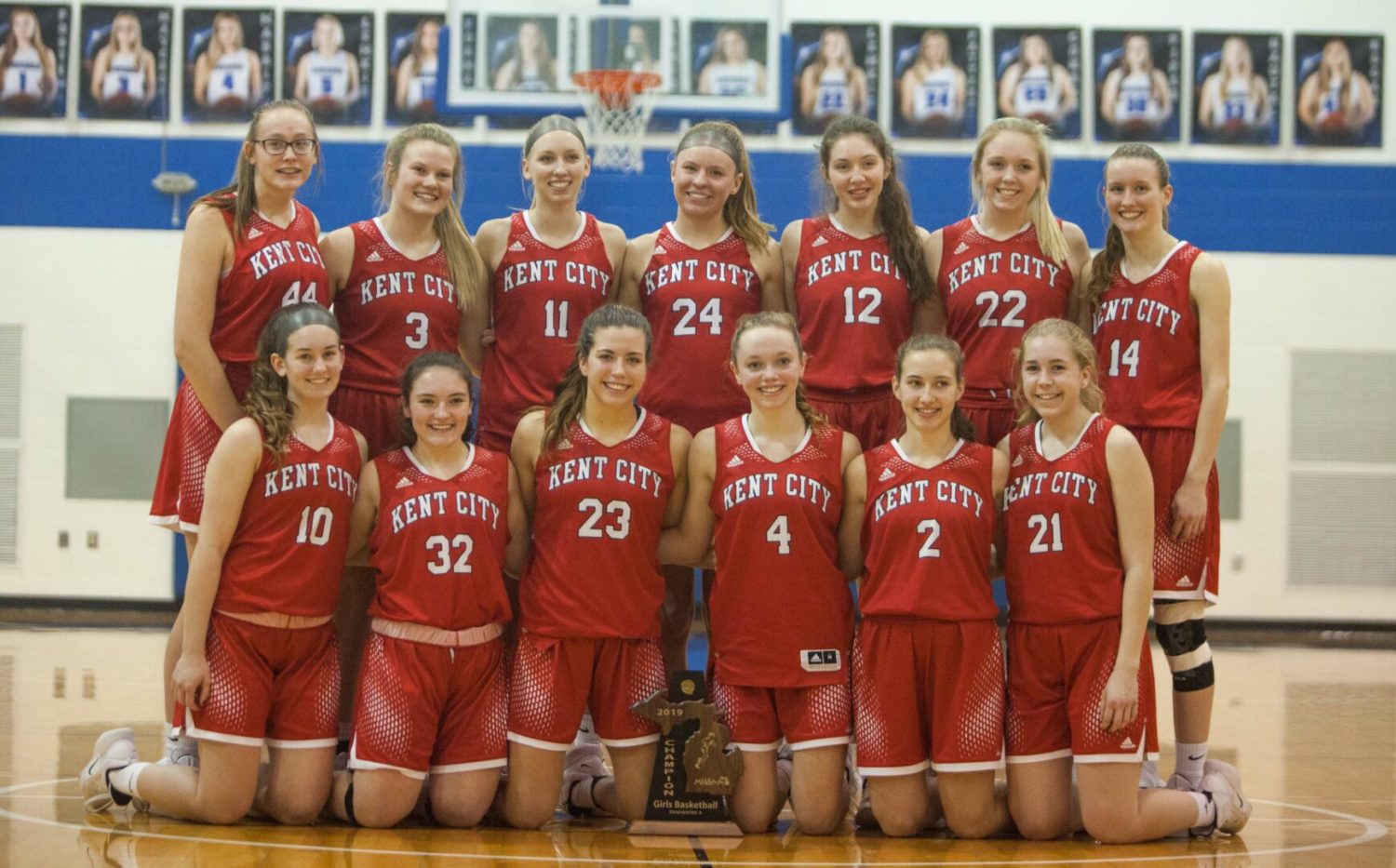 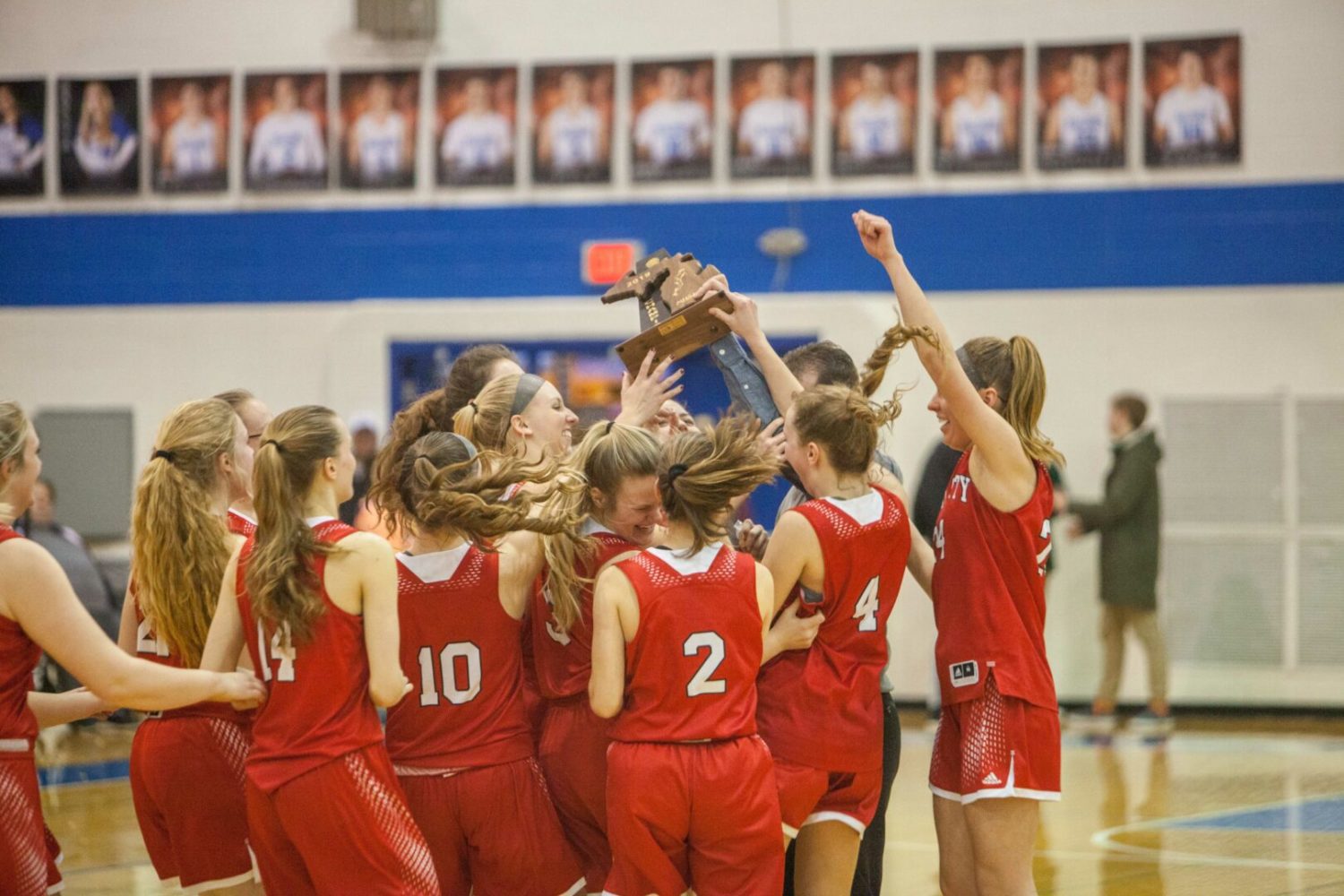 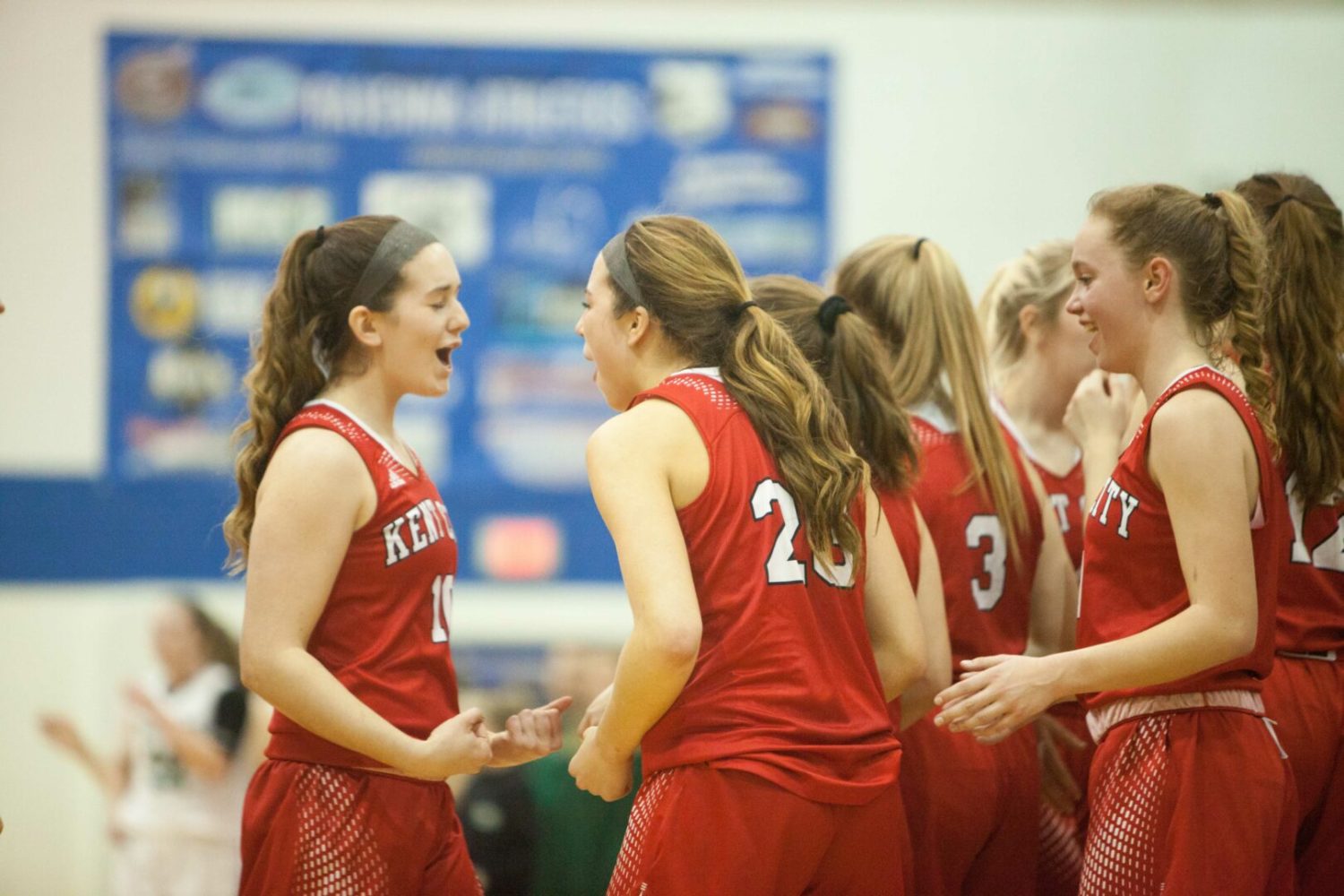 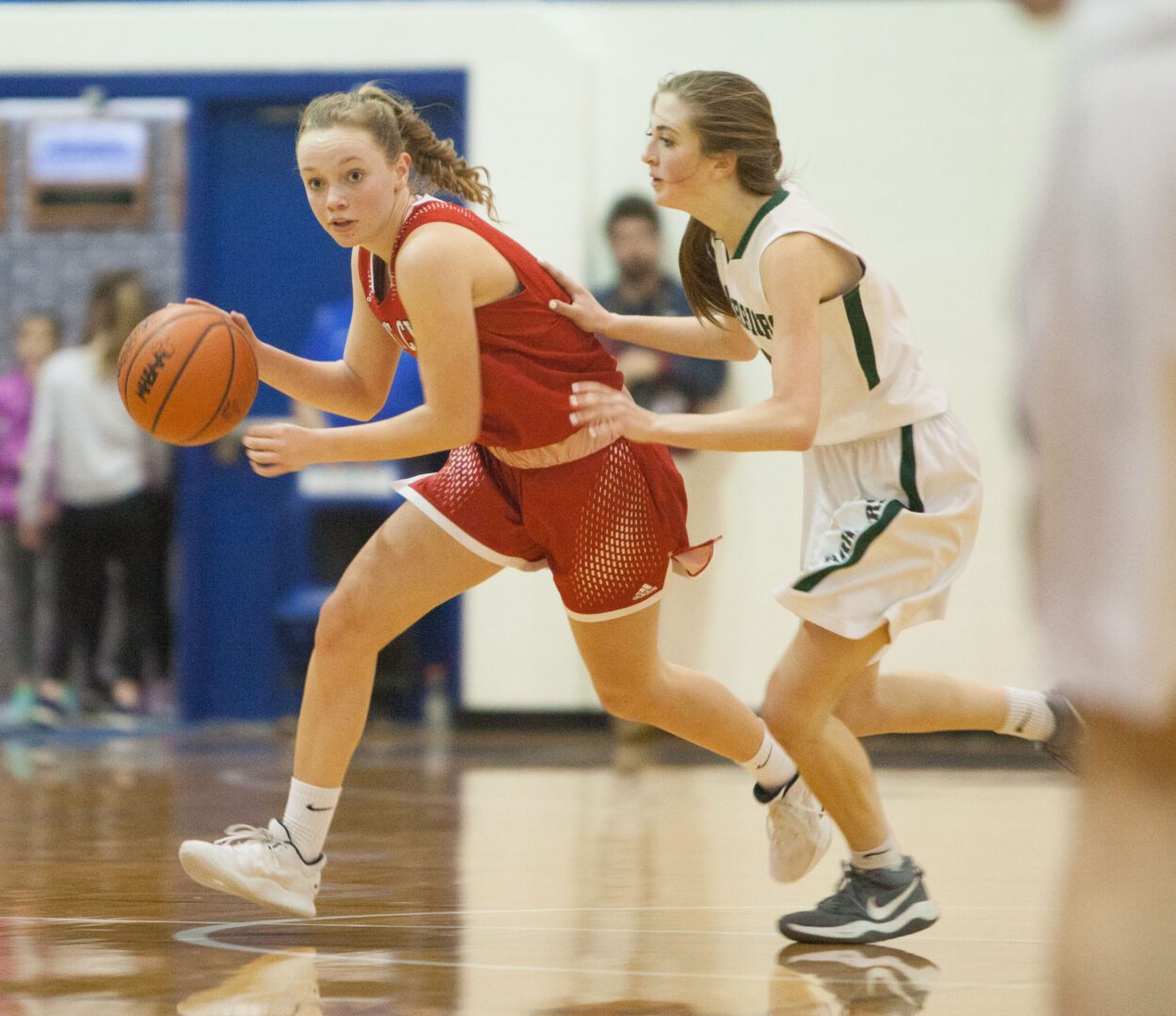 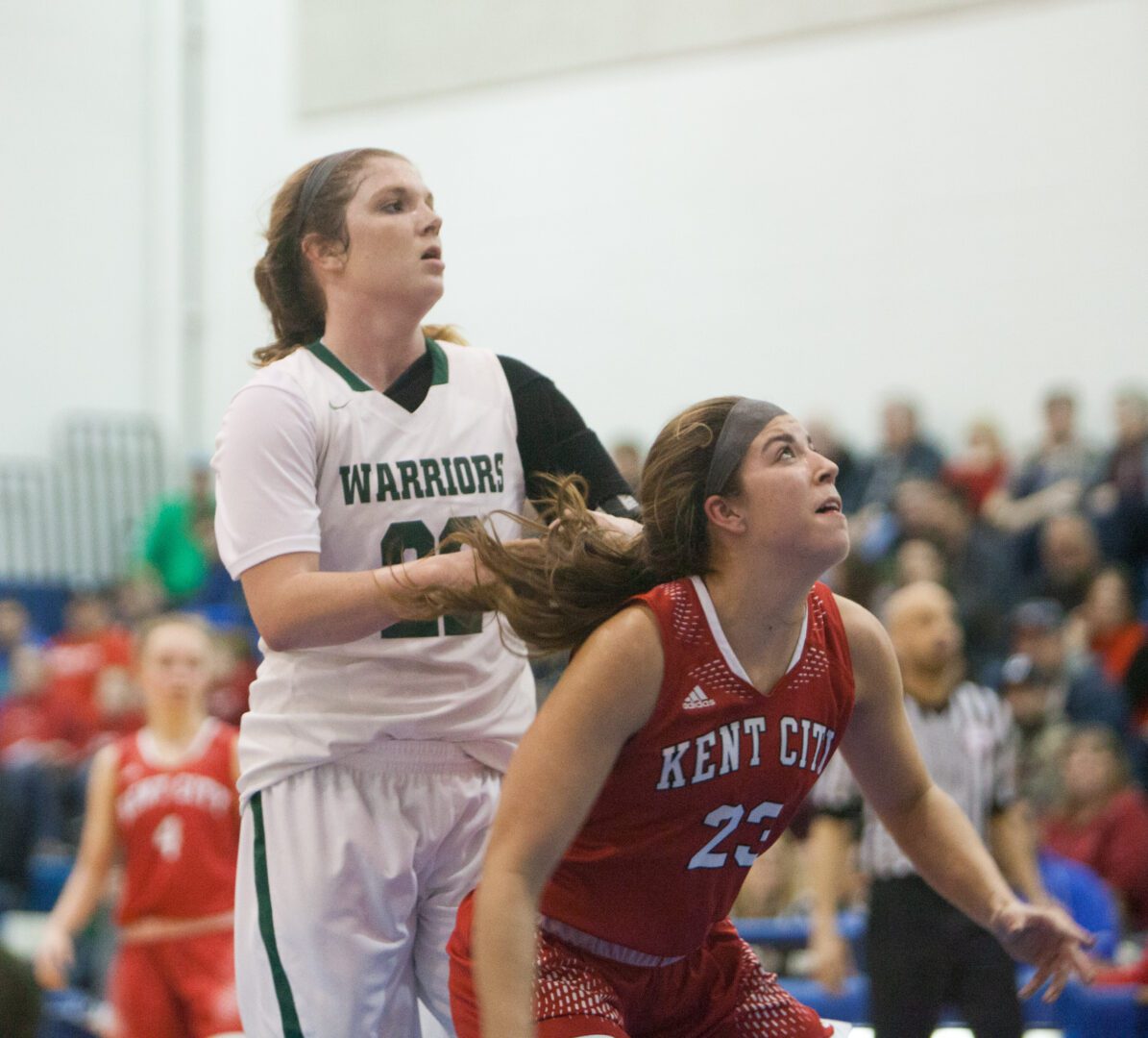 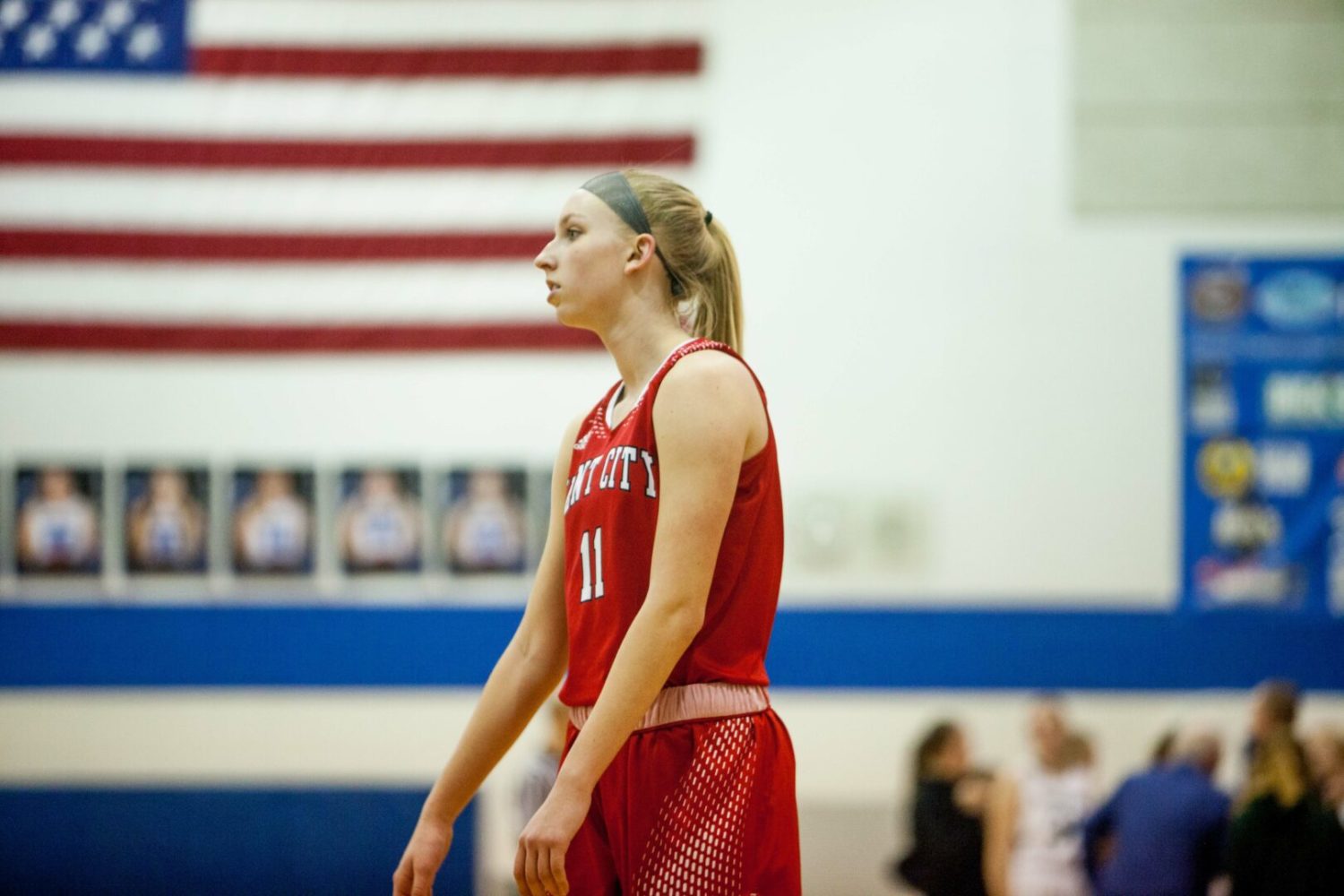 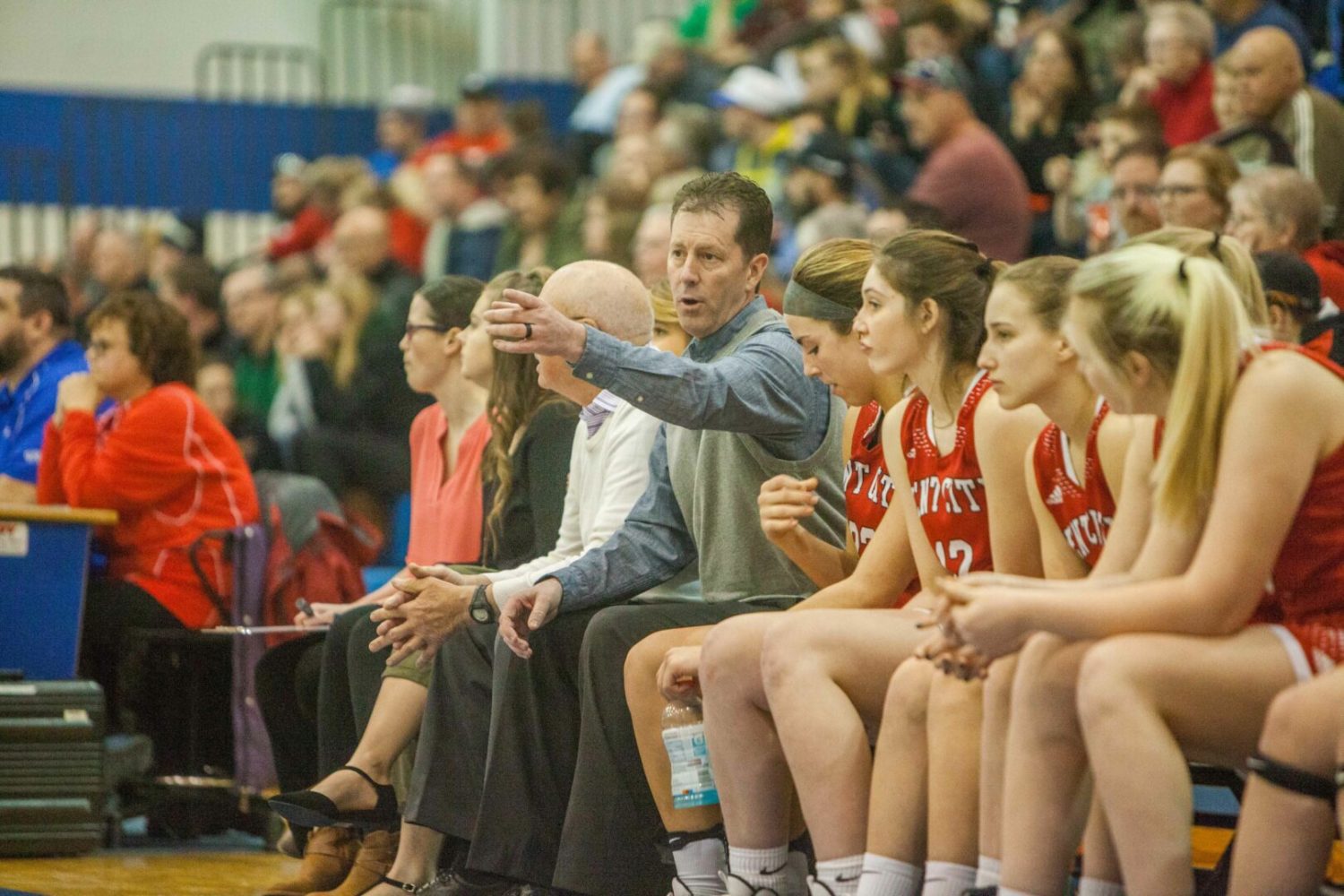 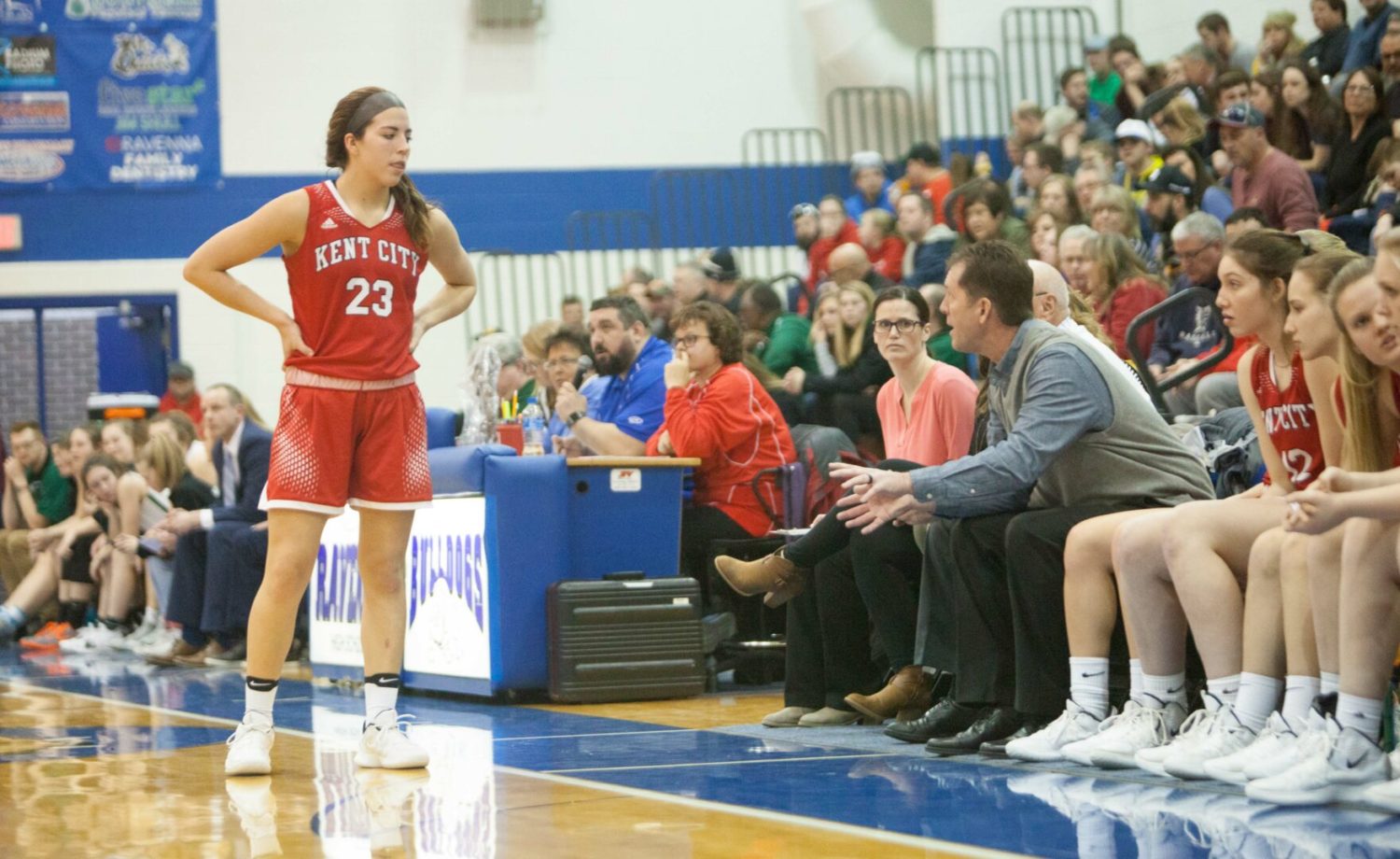 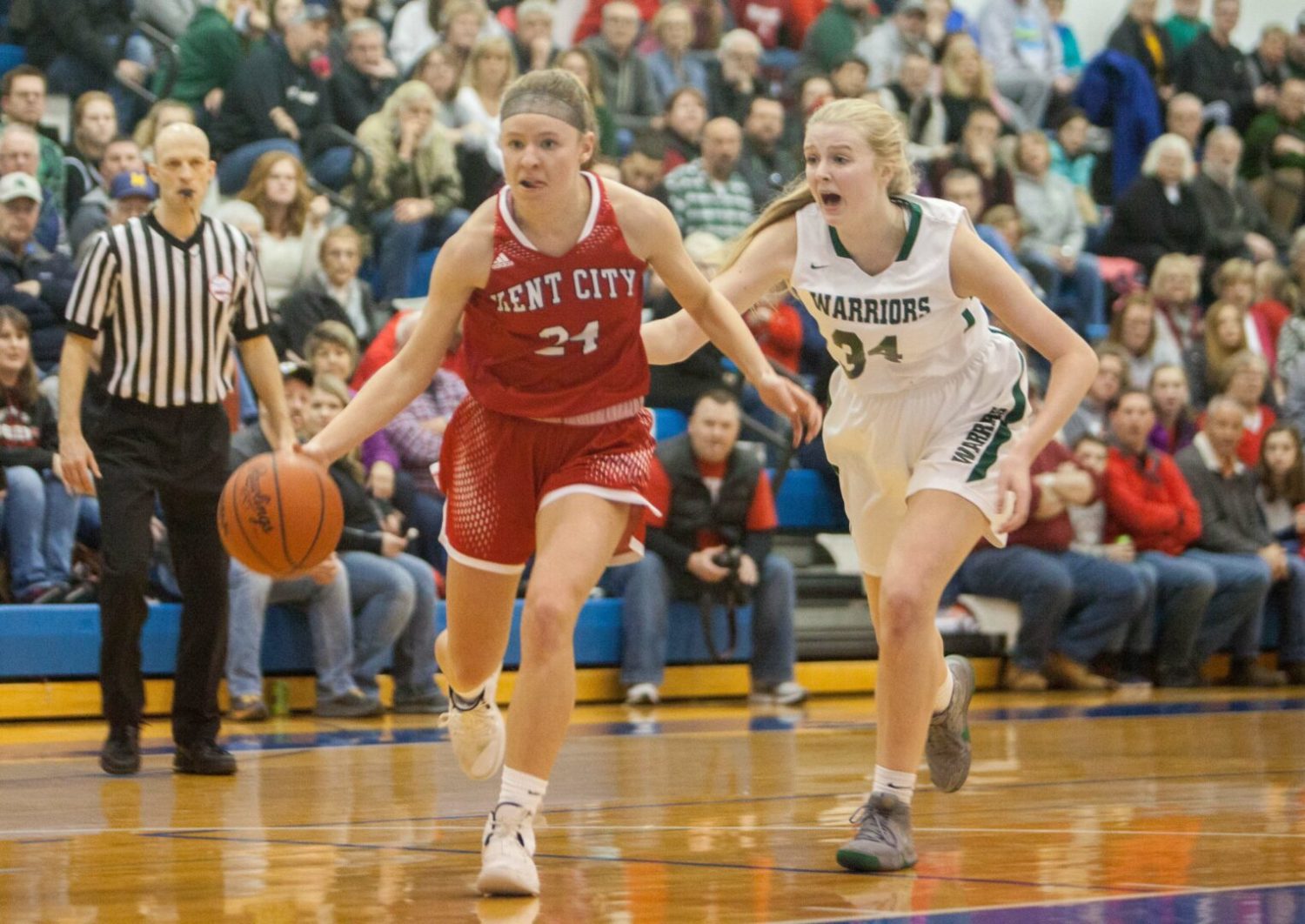 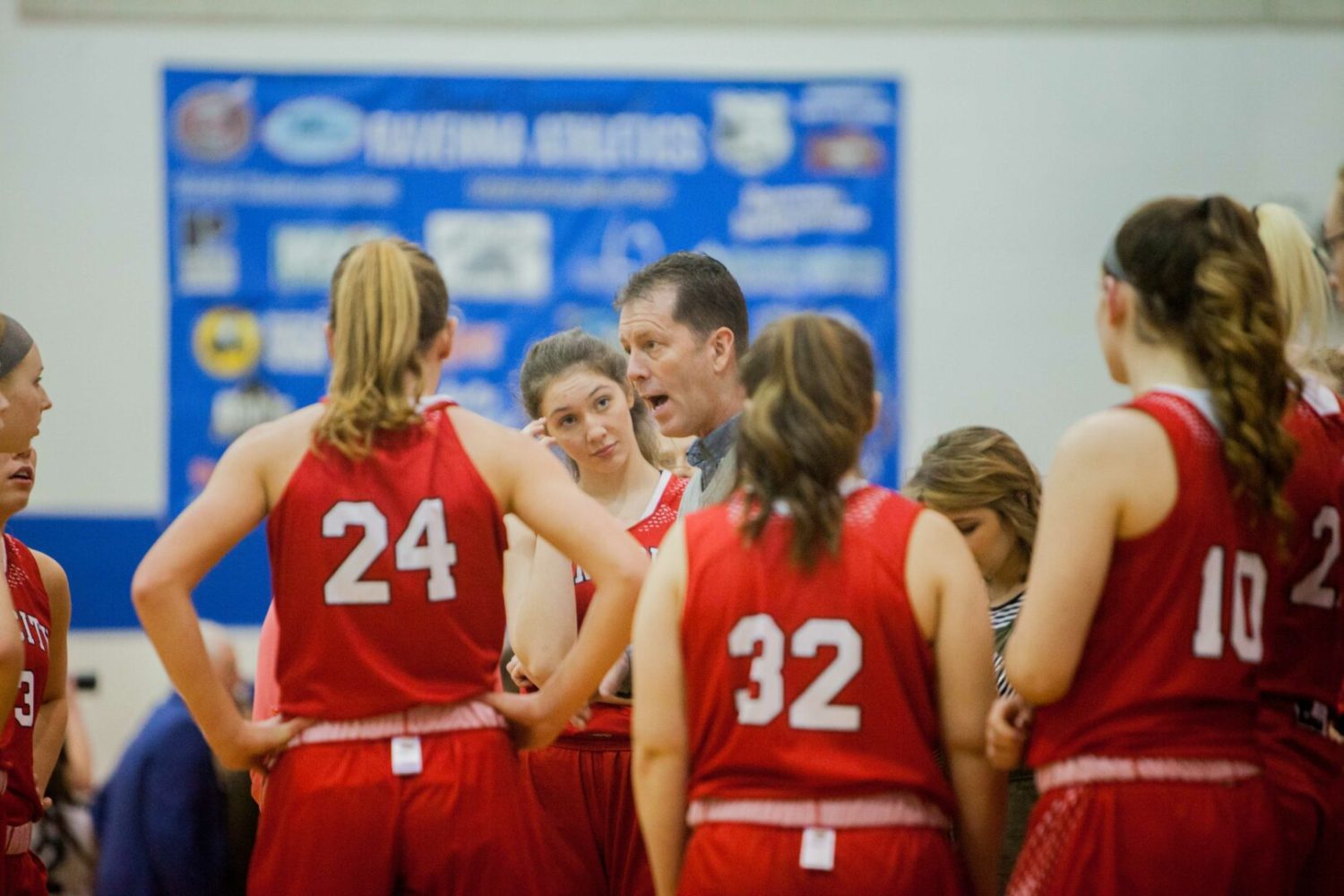 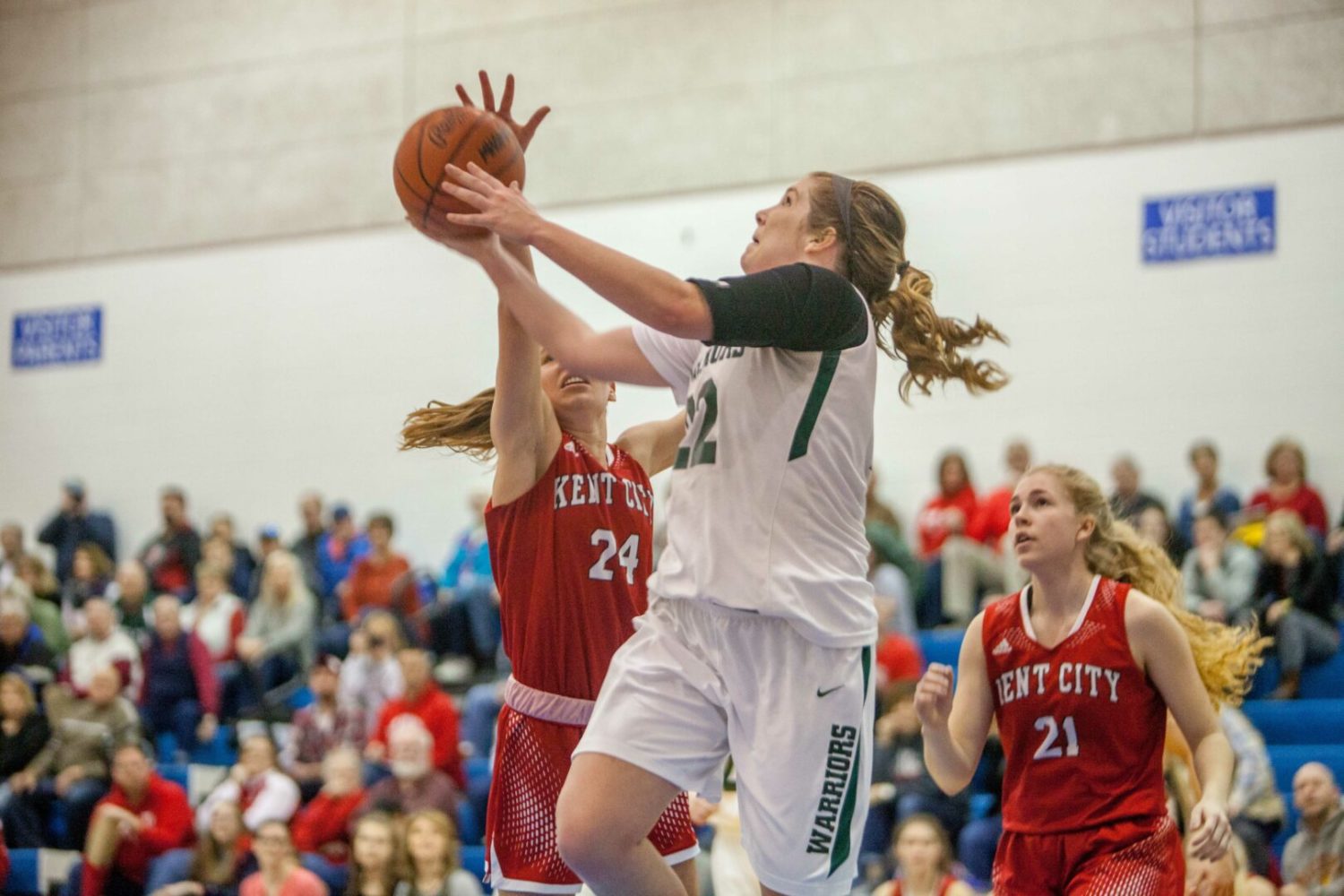 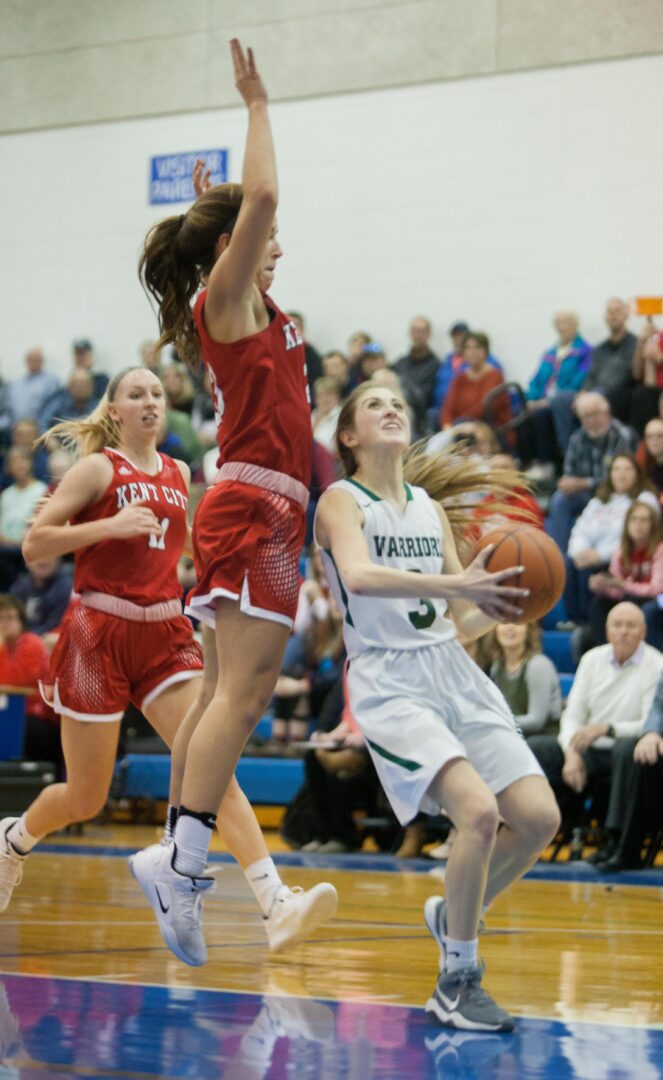 Meghan Heiss makes a jump stop at the elbow for WMC. Photo/Jason Goorman 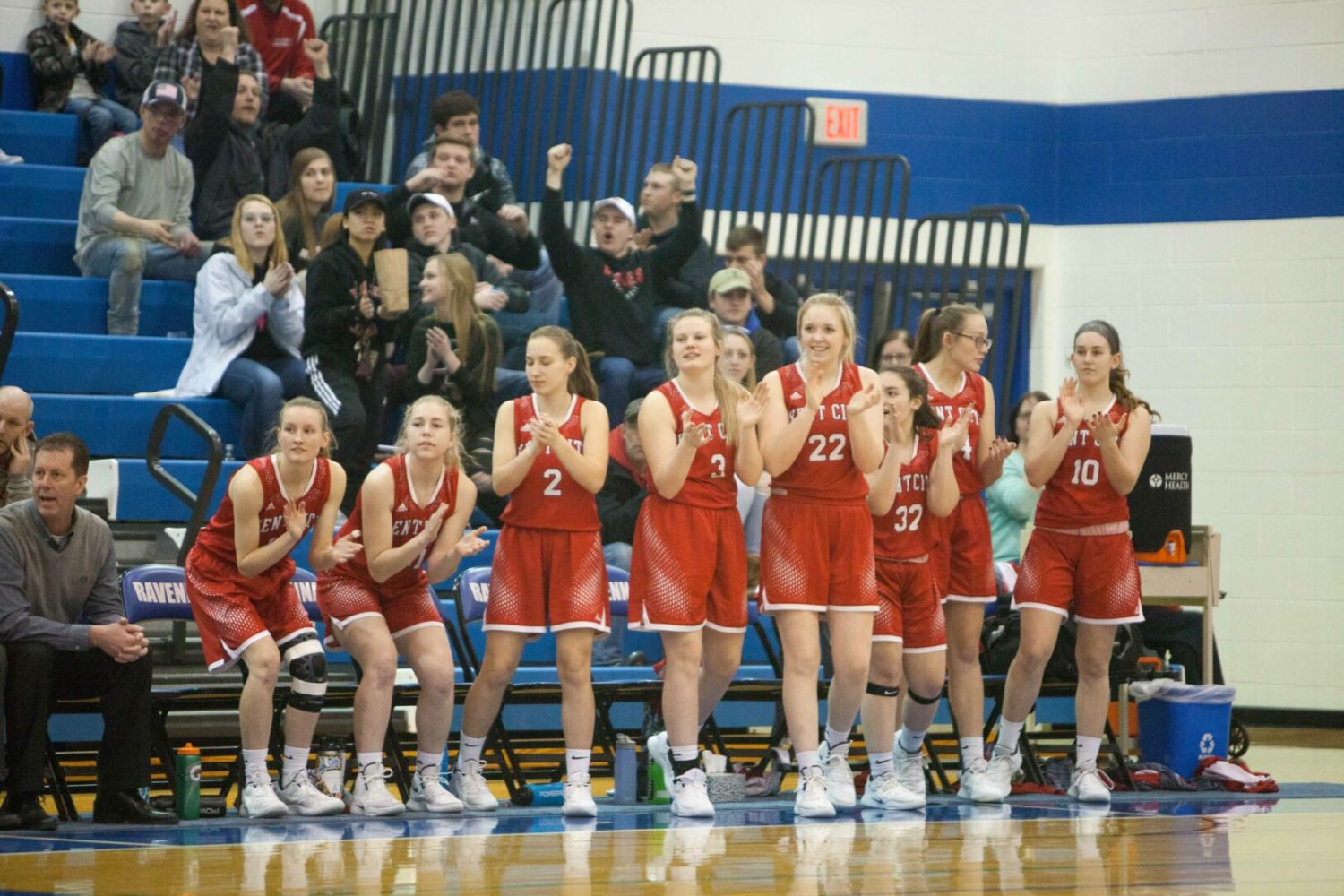 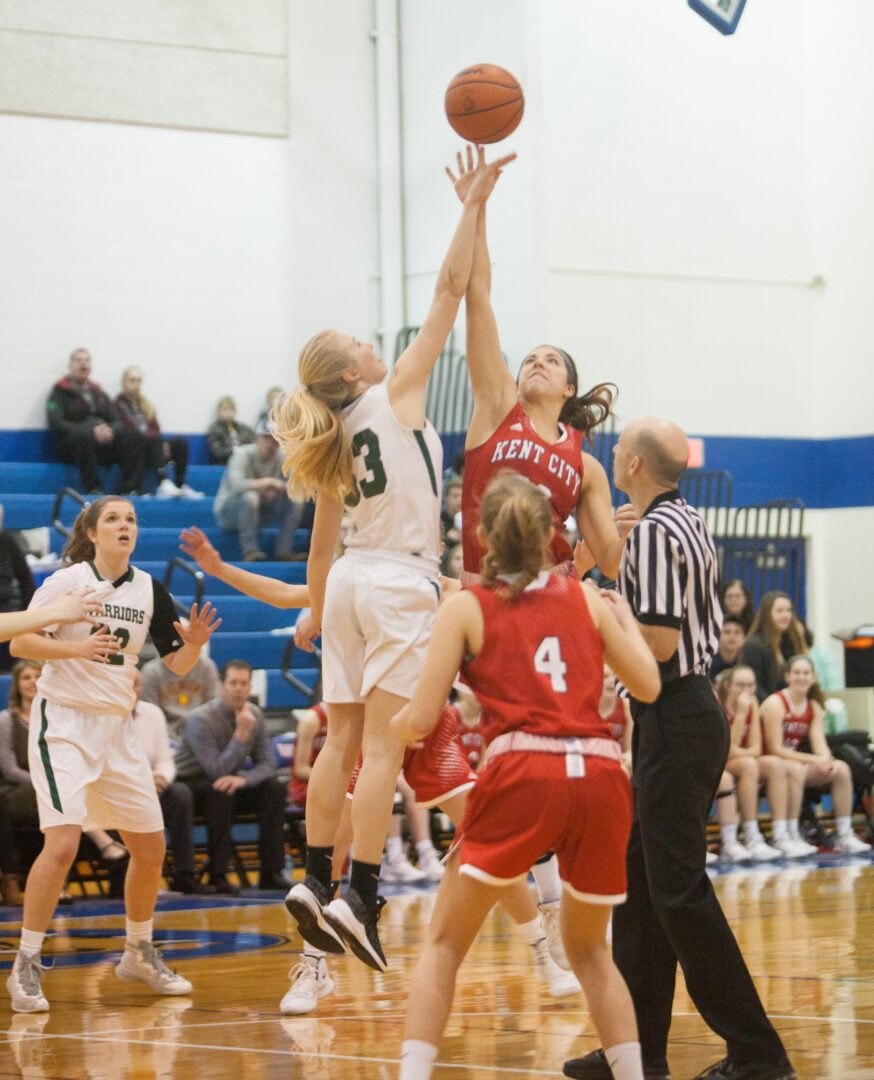