MUSKEGON – Three weeks ago, when the West Michigan Ironmen played their first game of the season, Derek VandenBosch was introduced as one of five players who have been with the team all four years.

But the truth is that he missed a few games a year ago, because at the start of the 2018 season he was officially retired from football.

The Orchard View graduate never wanted to leave the team. He has a passion for arena football, and loves playing for Muskegon fans, but was concerned about being away from his young family too often.

Headed into the 2018 season, it looked as though the Ironmen were going to compete for a second straight season in the Champions Indoor Football league, which has teams spread throughout the nation. With two small children, VandenBosch felt he couldn’t commit to that kind of travel. 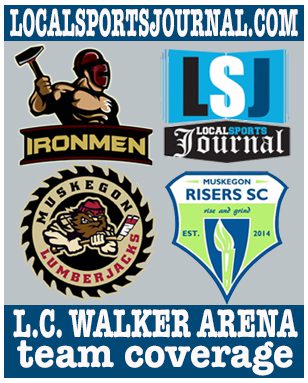 But the league plans fell through at the last minute for the Ironmen, and they ended up competing in the Midwest Professional Indoor Football League, which demanded much less travel. So VandenBosch returned to the team midway through the season, and helped the Ironmen win their first ever league championship last spring.

Now the Ironmen are in yet another new league – the American Arena League – and will mostly play teams from neighboring states again this season. So VandenBosch is happily on board as the Ironmen prepare for their first game in their new league on Saturday night, against the Indianapolis Enforcers at L.C. Walker Arena. 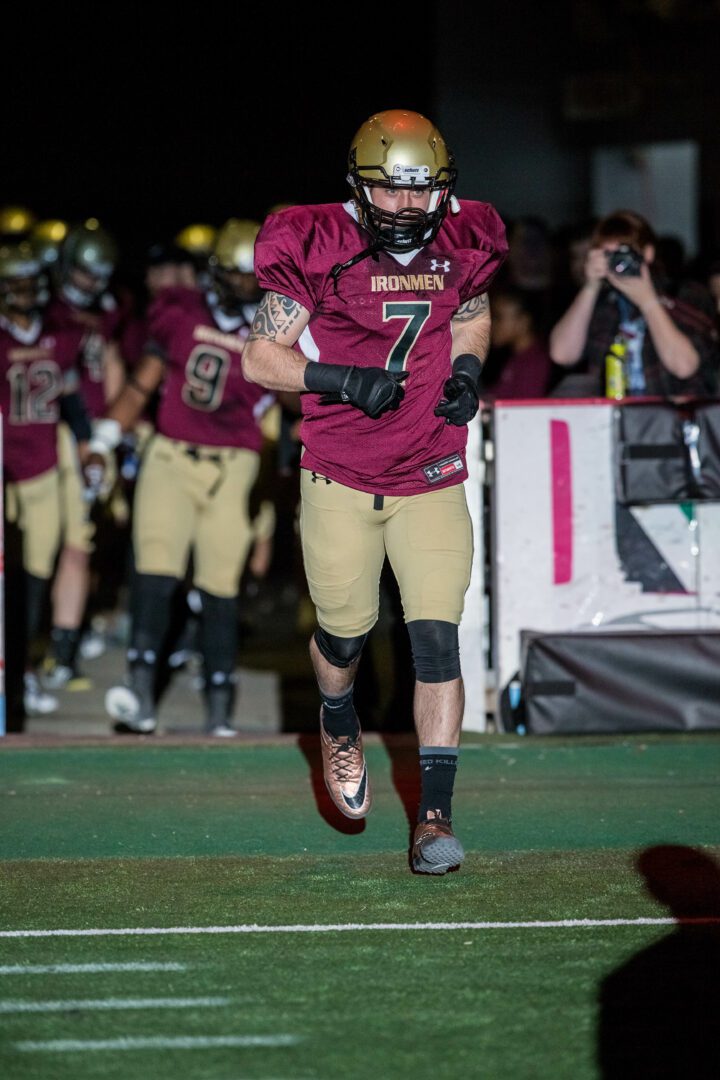 Derek VandenBosch takes the field for the Ironmen. Photo/Tim Reilly

“I had made the decision to retire after the previous season, just because I was starting to get up there in age as far as football years, and the biggest thing was that in the previous league there was so much traveling all over the country,” said VandenBosch, 28. “Every other weekend I was gone all weekend. I have two little kids I love spending time with, and it just got to be too time consuming.

“Then last year they switched back to one of the lower leagues, they gave me a call and I was happy to come back. I never wanted to stop playing. The passion never left.”

VandenBosch graduated from Orchard View in 2008. After a standout prep career with the Cardinals (113 tackles and six interceptions as a safety during his senior year), he played for two seasons at Grand Rapids Community College, including the final season under former Muskegon High School and current Ferris State coach Tony Annese.

After that he played two seasons at the University of Saint Francis in Fort Wayne, Indiana. When he graduated, he logically assumed that his football career was over.

But as luck would have it, the Ironmen was just forming when VandenBosch came home. He was recruited by former team owner TJ Williams, and suddenly had a chance to extend his career in the sport he loves, albeit in an arena format.

“I was definitely excited to be able to keep playing,” he said. “I didn’t have to be talked into it too much. The thing I love is playing for the city at L.C. Walker Arena, and having my kids be able to watch me. That’s probably my favorite thing.”

The Ironmen have been thrilled with VandenBosch’s steady contributions on defense every season.

He’s the team’s starting “jack linebacker,” which means he moves all over the field and does whatever is necessary. He’s might be involved in pass coverage or stopping the run, but whatever he does, he does it well, according to Ironmen Coach Nate Smith.

“He’s more of a cover linebacker,” Smith said. “He plays wall-to-wall, pass coverage and run support, kind of like a strong safety in the outdoor game. 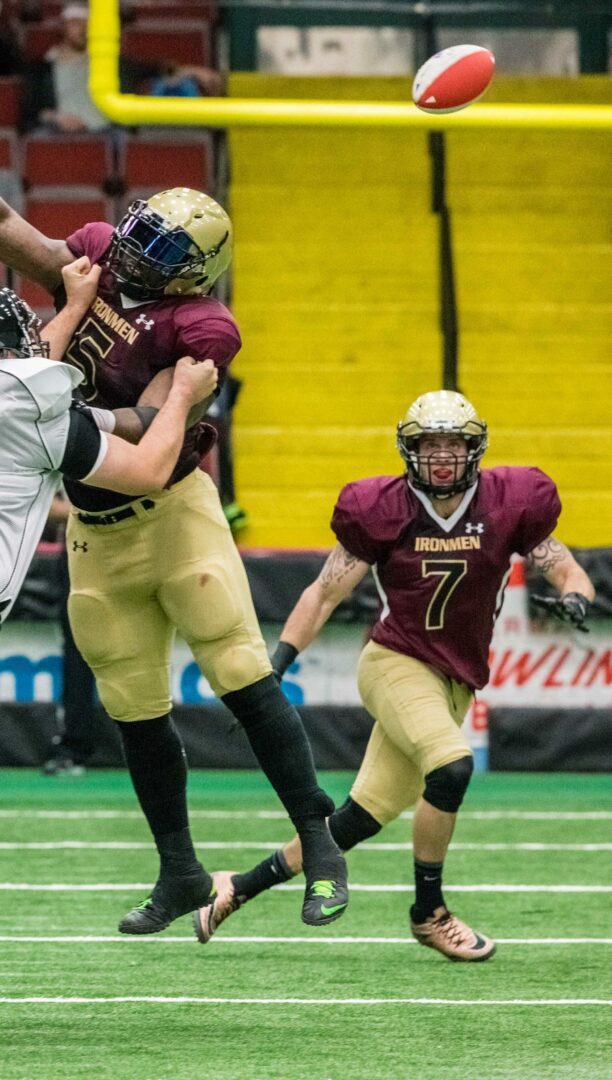 VandenBosch (No. 7) eyes a pass during the Ironmen’s inaugural season. Photo/Tim Reilly

“He’s a great player. He knows what he’s supposed to be doing, and always gives 100 percent. He’s definitely a leader in the locker room. The guys look to him because he’s been around the game and he’s real positive, but he also pushes the younger guys when necessary, and helps them learn the difference between this game and the outdoor game.”

The Ironmen have a lot of other veterans as well. They started the season with at least a dozen players from last year’s championship squad, and they feel like they have a pretty good team.

But it’s been a long time since the Ironmen have really been challenged. Last year they cruised through their schedule with a perfect 5-0 record, and outscored opponents 344-88.

In early March they opened the 2019 season with a non-league game against a team called the Chicago Mustangs, and ran away with an almost embarrassingly easy 95-0 victory.

Now the Ironmen are prepared to open play in their new league, which they hope will bring some tougher competition.

“When you have a team that’s played so long together, you start clicking on stuff,” VandenBosch said. “We’re licking our chops to start playing some tougher teams. It’s fun when you line up against a team that matches your talent. All of last season that was probably not the case.”

While VandenBosch did not like the travel back in the CIF days, he misses the elite competition in that league. The Ironmen had their only sub-.500 season in 2017 in the CIF, but almost all of the games were close and competitive.

“Every single game in the CIF was a great game to watch for the fans,” he said. “I like those kind of games. The true football fan would rather see us in a close game, even if we lose. We want that type of competition to push ourselves.”

Regardless of how challenging the new league turns out to be, VandenBosch said he and his teammates will just be happy to be playing again Saturday night. Their first game of the season was March 9, and they’ve had too long of a break since then.

“The long pauses are good if you have injures, but after that first game we were ready to just get another game going,” he said. “We were not pushed enough to get into the full groove. We are ready to play again, that’s for sure. It’s no fun practicing without the reward of a game.”

The Ironmen’s current schedule fits perfectly with the rest of VandenBosch’s life, which also includes working as an athletic trainer at Peak Training Academy, teaching a few classes at Family Fitness Center, and distributing products for Wesco.

As long as the team remains in a league that allows him to do all of that – and spend quality time with his girlfriend Kiersen and their 4-year-old daughter and 2-year-old son – he says he could keep playing for several more seasons.

But there is no chance that he would consider playing for any team but the Ironmen.

“Even if I had the opportunity to play for another team – even if someone said, ‘Come on down, we’ll pay you double,’ it wouldn’t be enough to make me leave Muskegon,” he said.