KENT CITY – It may have only been a Division 3 regional semifinal game on Monday night, when Kent City fell

The two girls basketball powerhouse teams traded punches like they were in the ring for the main event at Madison Square Garden.

And if it hadn’t been for the final minute of play, Kent City would have emerged with a victory and a real possibility of advancing very deep in the state tournament.

“We knew if we beat them we’d go all the way,” said Eagles guard Kenzie Bowers, after her team narrowly lost to the highly-ranked Pirates. “Obviously it was a game we wanted to win, but it just didn’t happen.”

For 31 of the 32 minutes on Monday night, Kent City appeared poised to knock off the favored Pirates, who beat them in the state quarterfinals last season. 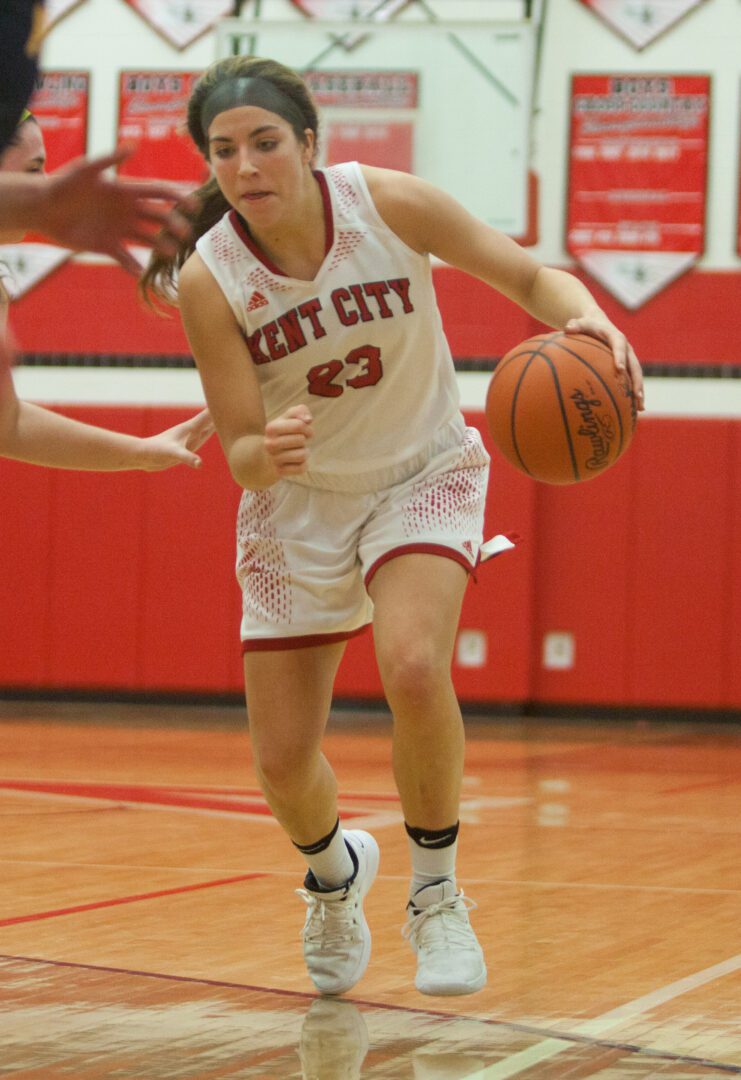 Kenzie Bowers dribbles to the wing against the Pewamo defensive pressure. Photo/Jason Goorman

Unfortunately for the Eagles, they missed free throws and were unable to get defensive stops down the stretch, leading to a fatal 5-0 Pirate run over the final 20 seconds.

The Eagles had a chance to send the game to overtime, but a last second shot from Lauren Freeland popped out of the basket as the buzzer sounded, bringing Kent City’s magical season to a heart-breaking end.

“My girls played a whale of a game,” said Eagles head coach Scott Carlson. “We had our chances. Overall though, it was a great atmosphere and it was an exciting game”

The two teams showed their strengths from the get-go in a slower-paced, half-court battle. They each had only nine possessions in the first quarter and Kent City had a slight 9-8 lead at the buzzer.

The game slowed down even more in the second quarter, with each team only having seven possessions and Kent City holding a 17-14 lead at halftime.

“I’d like to see a shot clock,” said Carlson, regarding the slower pace of play that the Pirates like to employ. “They’ll take 45 seconds each possession. We’d love to get up and down the court, but we knew we wouldn’t be able to and were prepared for it.”

In the third quarter, the two teams battled back and forth with Kent City still holding on to a slight 27-25 advantage heading into the fourth

Then the real drama began. 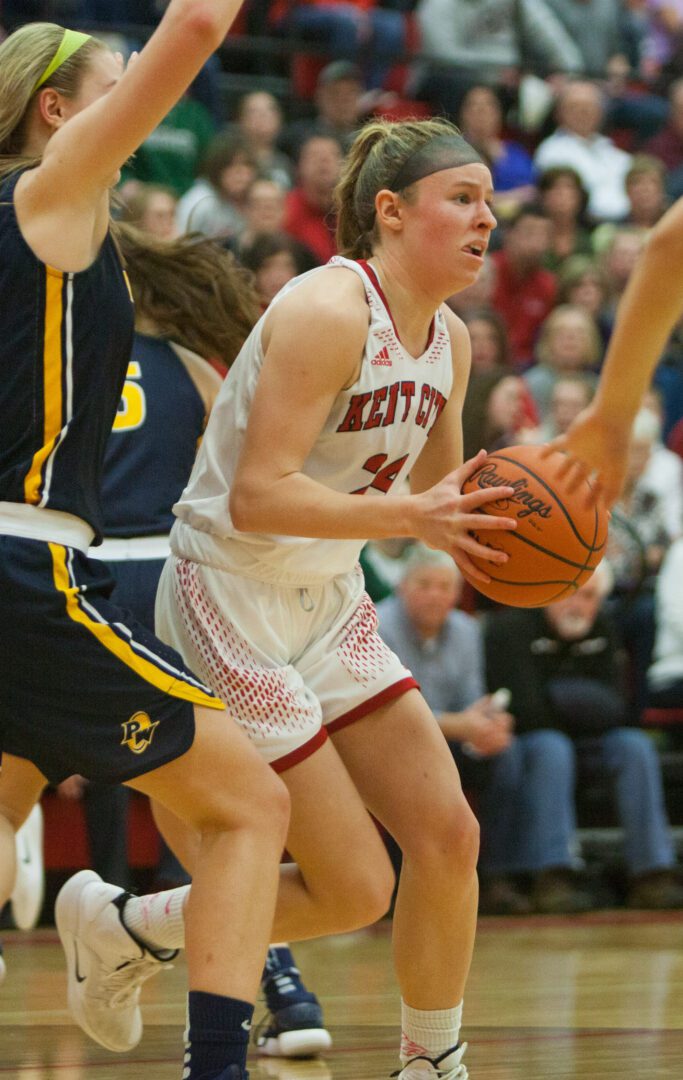 Lauren Schnicke looks to make a pass after dribbling in the lane for Kent City. Photo/Jason Goorman

The Eagles again failed to convert the front end of a 1-and-1, then Pewamo’s Ellie Droste managed to avoid traps, get to the basket and make her shot while being fouled.

Droste made her free throw, giving the Pirates a 35-33 advantage with 16 seconds remaining.

“I honestly don’t even remember how it went down,” said Droste about what ended up being the game- winning basket. “But I just saw it go in and I’ve never been more happy in my entire life.”

After a Kent City time out, the Eagles tried but were unable to find Bowers off a triple screen, and eventually got the ball to Freeland. She had a good look at the basket and nearly made a game-tying shot, but the ball went in and out at the buzzer, ending Kent City’s season.

The Eagles were led by Zara Weber with 13 points while Bowers finished with nine. Pewamo-Westphalia was led by Ellie Droste with 15 points.

The Eagles finished the season with a 19-5 record, and will return 9 of 13 players to the team next season.

“It’s going to push me to work even harder,” Bowers said about the disappointing loss. “But I’ll take away that we had a great season have nothing to hang our heads about.”

“What a game,” he said. “Hats off to Kent City, they’re a tremendous team. We knew it would be like this on their floor and in front of their crowd.” 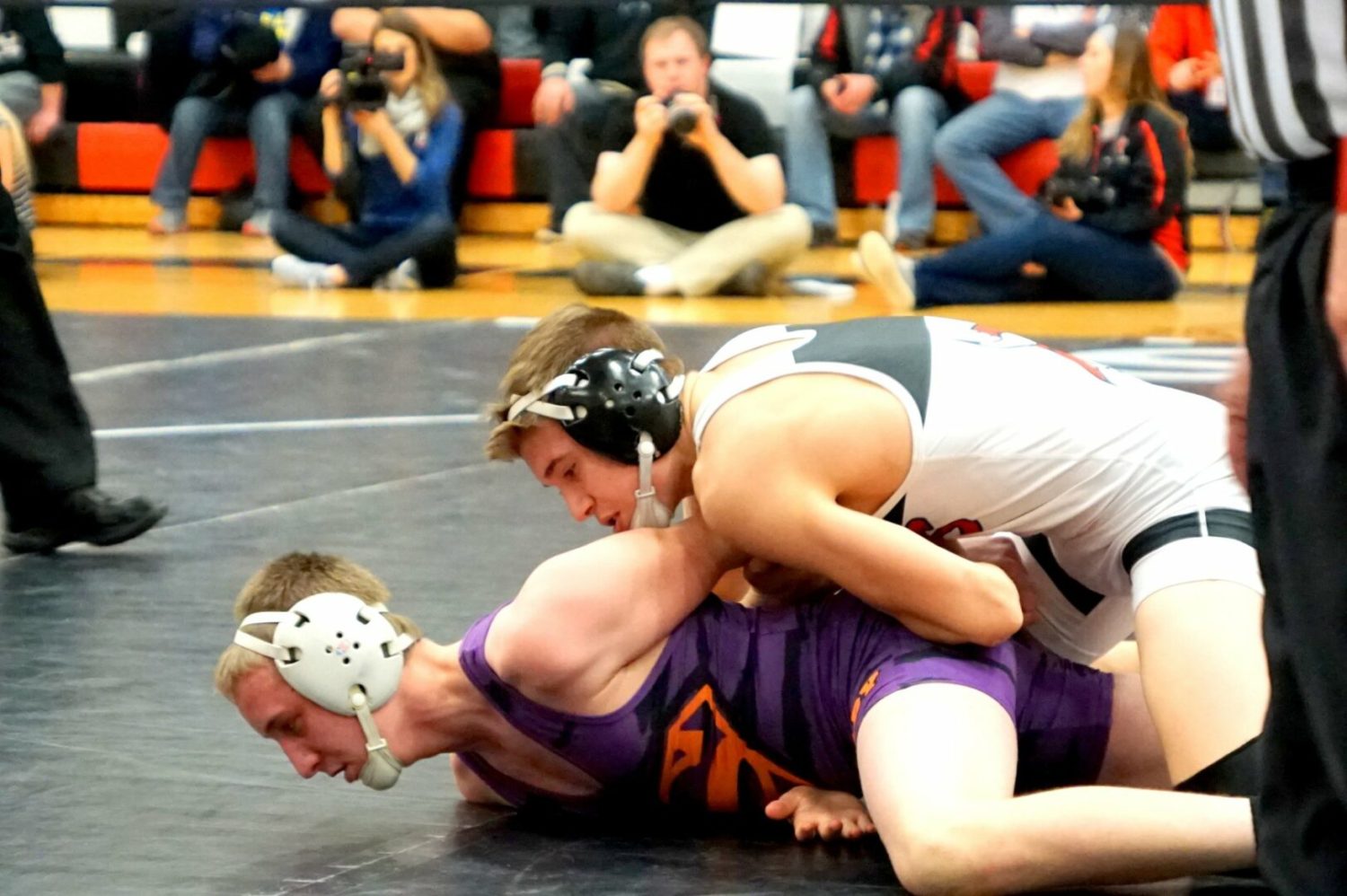