Lightning strikes twice in three years: Ludington boys are back in the state Final Four

MOUNT PLEASANT – When the Ludington Orioles made their unlikely state final run in 2017, most observers

thought it was like catching lighting in a bottle, and not likely to happen again any time soon.

Certainly not this season, when the Orioles lost 10 games in the regular season.

But they couldn’t have been more wrong.

The Orioles have put on their Cinderella masks for the second time in three seasons, and are headed for Friday’s state semifinals. They earned that right with a stunningly easy 65-32 victory over Alma in the state quarterfinals at Mount Pleasant High School on Tuesday.

The Orioles, now 15-10 on the season, will take on Hudsonville Unity Christian on Friday at 5:30 p.m. in a Division 2 semifinal matchup at Michigan State University’s Breslin Center.

“I think that this speaks more to how great of a coach we have,” said Ludington senior forward Josh Laman, who was a hero as a sophomore in Ludington’s 2017 state semifinal victory. “Coach Shank gets us prepared better than anyone around, and we have him to thank for a lot of this.” 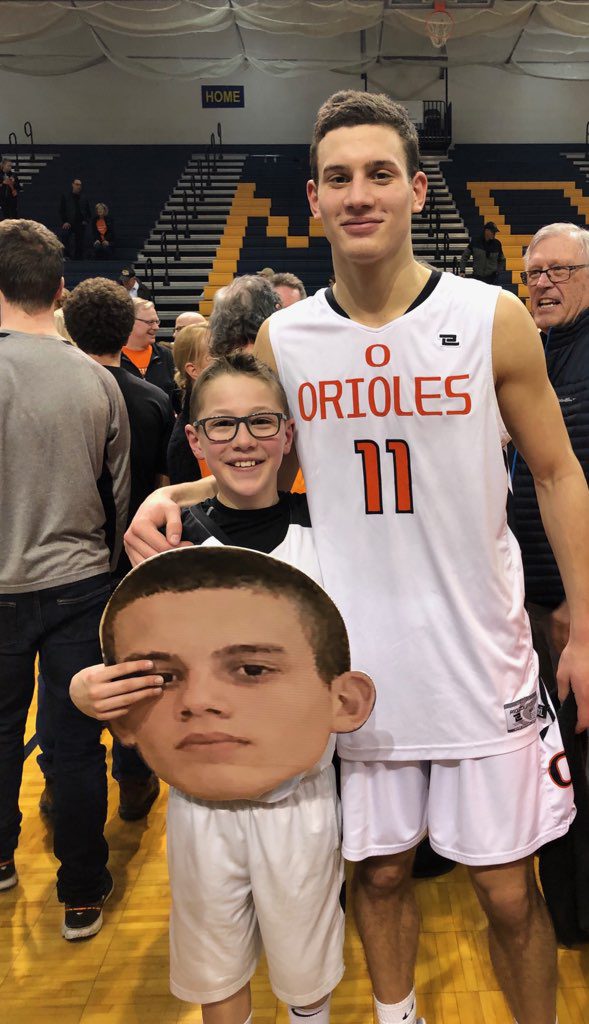 Josh Lahman, a star from the 2017 state finals team, stands with a amped up Oriole fan after the big win.

The Oriole offense struggled to get going in the early minutes, but a 10-3 run to close out the first quarter gave Ludington a 17-9 lead after one.

Alma fought back in the second quarter, starting with a 10-2 run, and the game was tied 19-19 with three minutes to go before halftime.

Ludington responded with an 8-0 run to end the quarter, led 27-19 at halftime, and took control from there.

The Orioles held the Panthers to just five points in the third quarter and led 46-24 headed into the fourth.

Ludington finished things off with a 19-8 advantage in the final eight minutes.

Ludington advanced with its red-hot marksmanship. The Orioles shot a sizzling 61 percent from the floor and hit 10 three-pointers in the contest.

Coach Shank credited Laman, who finished with a game-high 15 points, for drawing a lot of attention on defense, leaving other shooters open.

“When you have a guy like Josh, you have to pick your poison on defense,” Shank said. “Either play him one-on-one or double him. They sent two guys at him and luckily we were able to knock down the shots.”

Alma was led by Camden Sutherland with 12 points.

Shank expressed simple gratitude for getting the chance of a lifetime, for the second time in three years.

“You have to be really grateful for this,” he said. “There are tons of great coaches and players in this state that don’t ever get the chance at this. So I’m just going to be thankful and proud of what this team has done.” 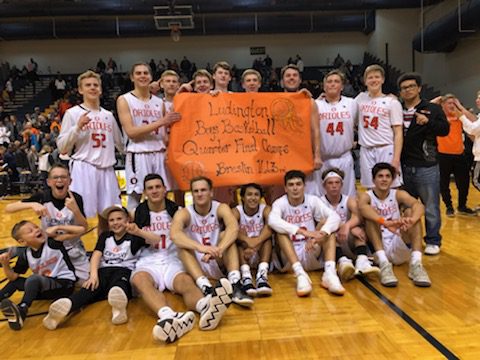 The Ludington basketball team gets together for a team photo.