MUSKEGON – Sometimes a layoff can hurt a playoff hockey team, causing some sluggishness for a game or two.

The Muskegon Lumberjacks sat out last week during the first round of the USHL Clark Cup playoffs, because they

earned a bye. Their opponents, the Dubuque Fighting Saints, swept Youngstown twice on the road last week and were playing great hockey. 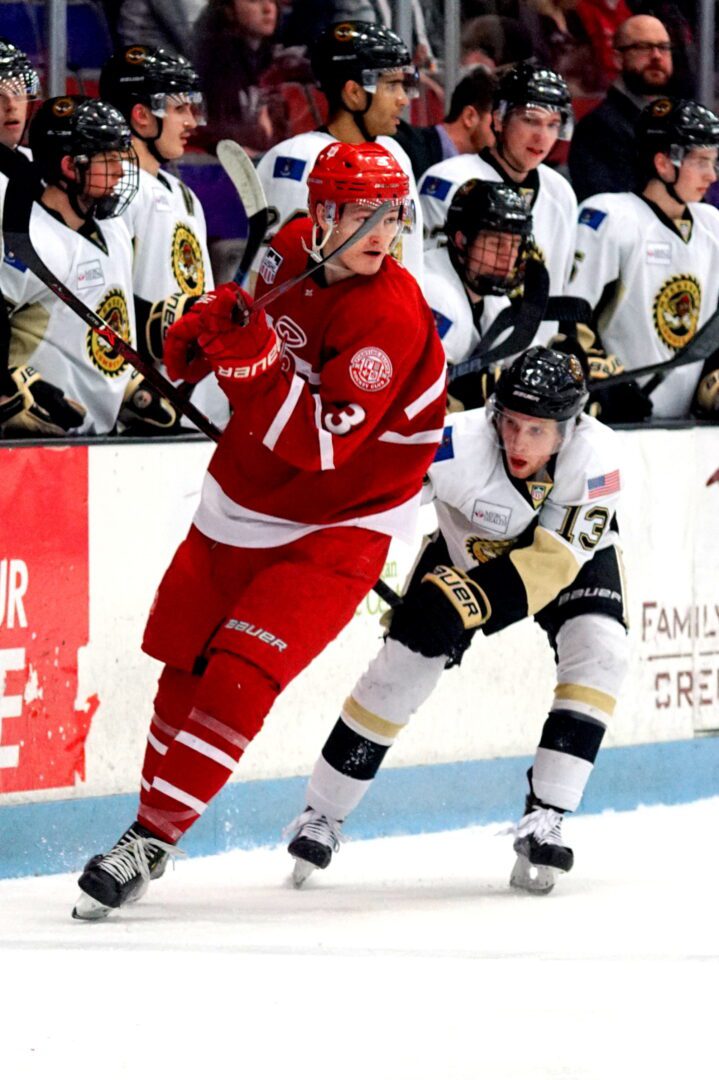 But the Lumberjacks returned to the ice without skipping a beat, cooling off Dubuque with an impressive 4-0 victory on Saturday at L.C. Walker Arena in the first game of their best-of-5 Eastern Conference semifinal series.

The Jacks will try to take a commanding lead in the series on Sunday in Game 2. Faceoff is slated for 5:15 p.m. at L.C Walker Arena.

“We knew how important the first period would be and getting off to a great start,” said Lumberjacks coach Mike Hamilton. “We already knew they (Dubuque) were playoff tested, so we were concerned if we were over-prepared for the series.”

Nolan Sullivan opened the scoring with a power play goal at the 6:38 mark of the first period to give Muskegon a 1-0 advantage. 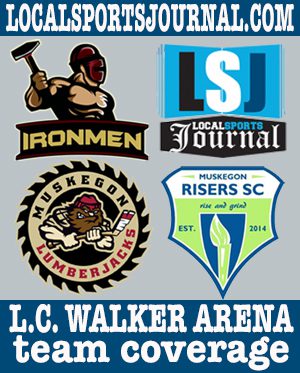 “We knew coming into the game it could be a slow start,” Sullivan said. “We just needed to grind through it and we were able to generate some energy with the first goal.”

Muskegon dominated the Fighting Saints in opportunities in the second period, outshooting the visitors by 20-4 margin. But they couldn’t find the goal, and went into the third with the thin 1-0 lead.

On the positive side, the Lumberjacks managed to kill all three Dubuque power plays in the second to keep the shutout going.

Muskegon finally increased its lead to 2-0 with a power play goal at the 1:41 mark of the third period by Max Ellis.

Mikael Hakkarainen added a 4-on-4 tally at 10:22 of the third period to make the score 3-0. Jack Williams finished things off with a goal at 12:08 of the third.

Muskegon outshot the Fighting Saints by a commanding 38-19 margin, and goaltender Brandon Bussi collected his eighth shutout of the season. 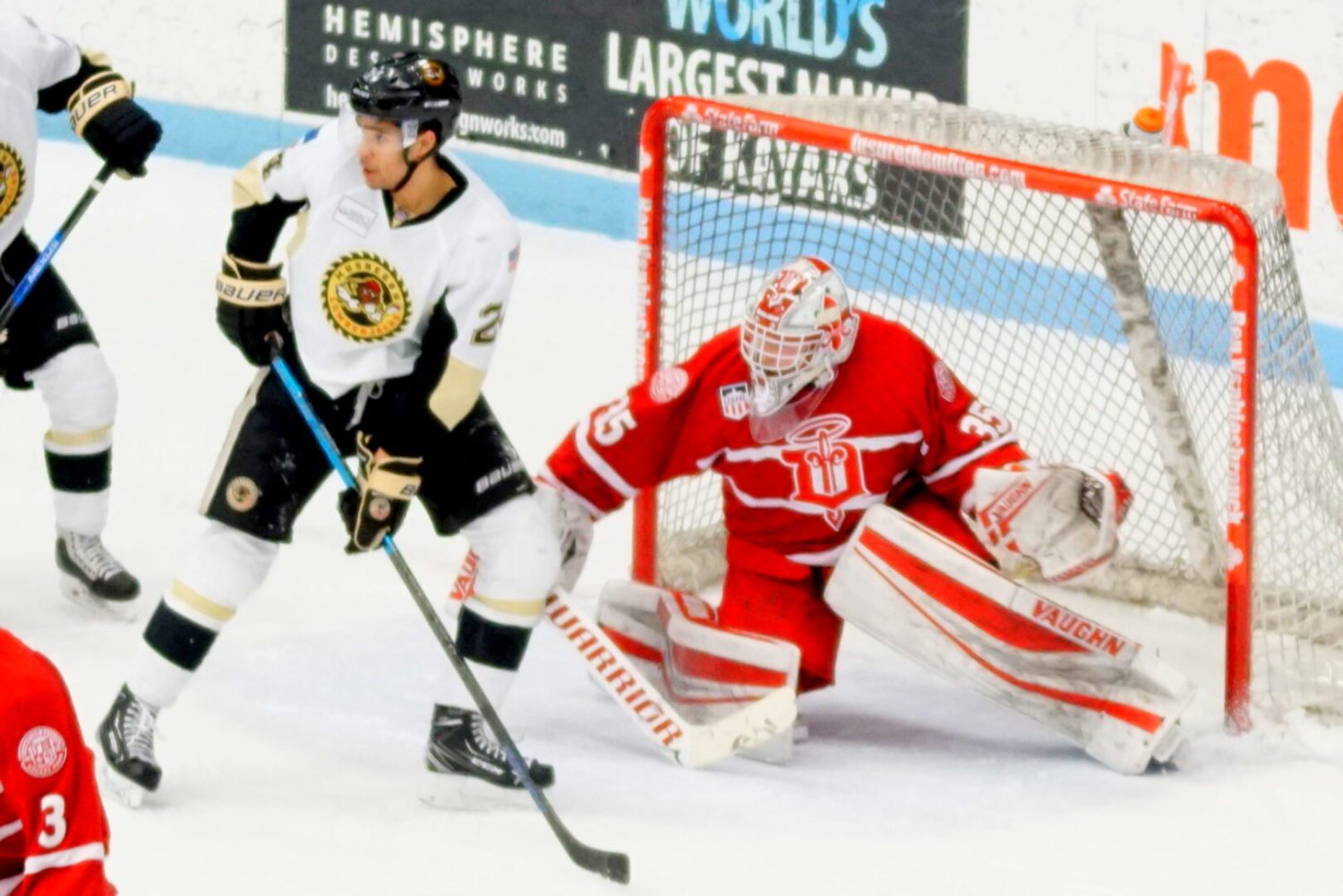 Jagger Joshua gets in front of Dubuque goalie No. 35 Matthew Thiessen. Photo/Leo Valdez

The Jacks had the edge in special teams, scoring two power plays goals out of their five chances while Dubuque failed in its four opportunities.

“We were ready for a hockey game and we stuck to a game plan – the guys committed to playing solid defense, we won the special teams battle and we did all the little things you are supposed to do in playoff hockey,” Hamilton said.

The Lumberjacks were led by Sullivan with a goal and an assist, while Bobby Lynch chipped in with two assists. Colby Bukes and Alex Yakovenko also added single assists.

“We are going to enjoy this one for just a minute and then right away we are thinking about tomorrow,” said Hamilton. “Tomorrow is a great opportunity for us to take a strong hold on the series.” 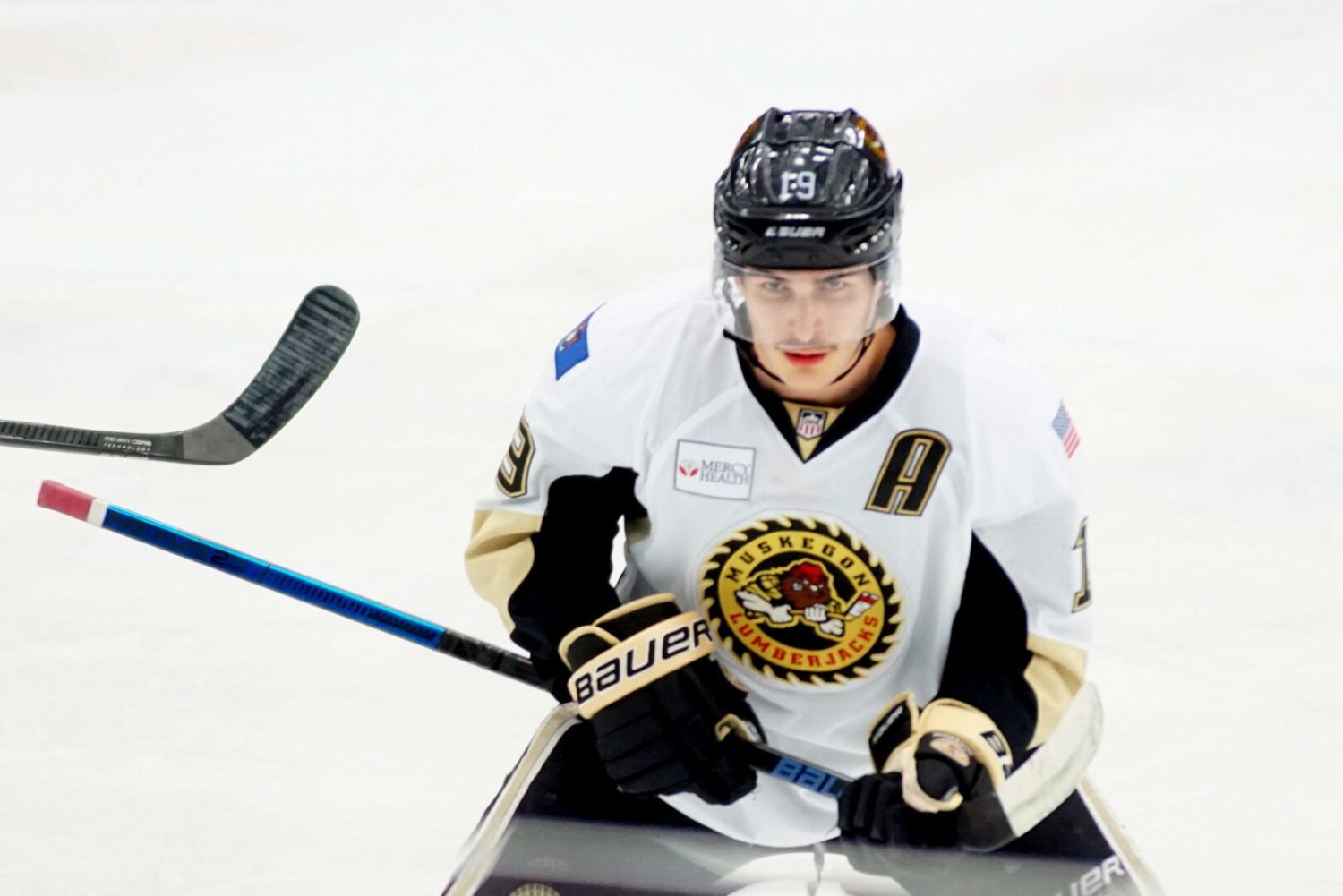 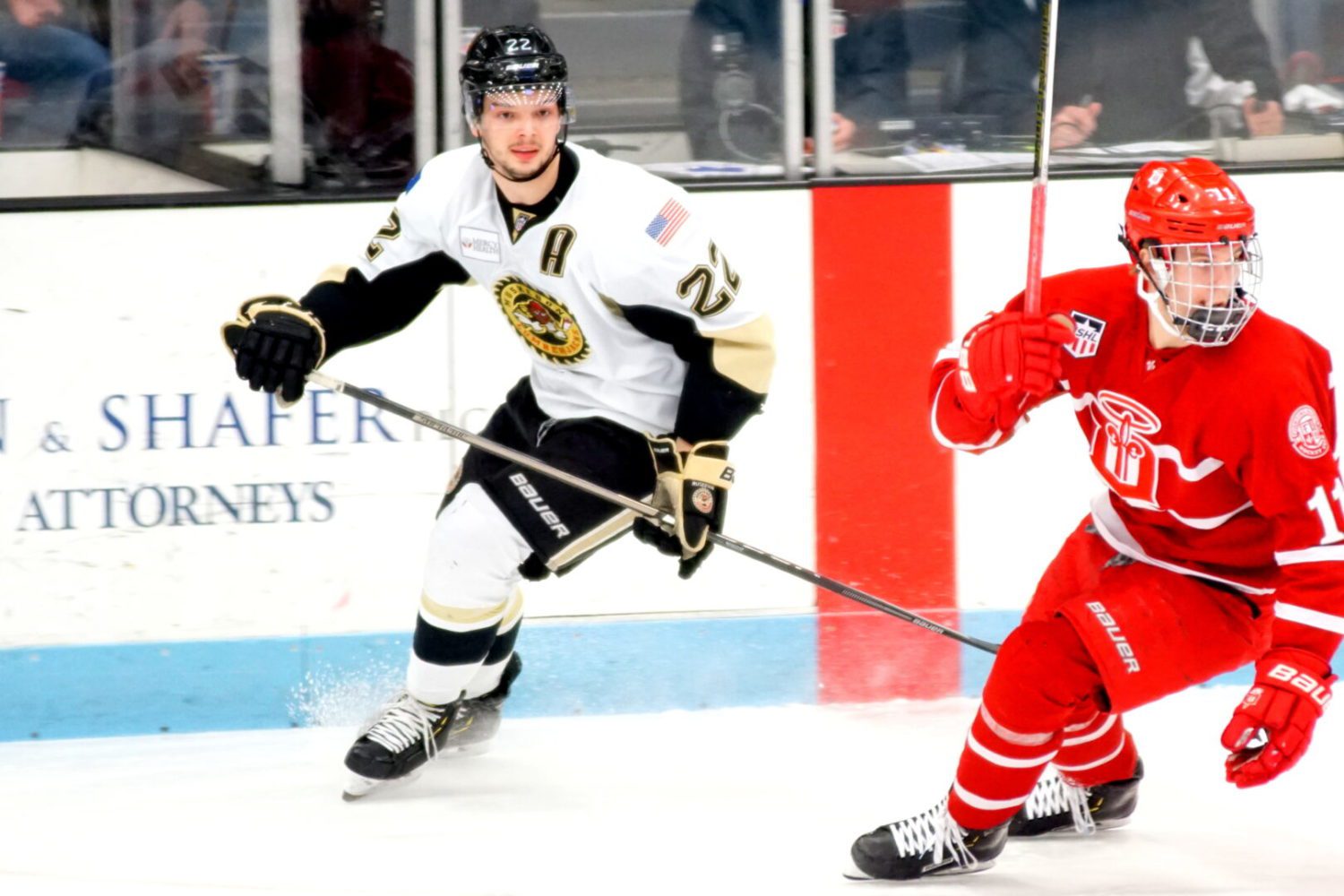 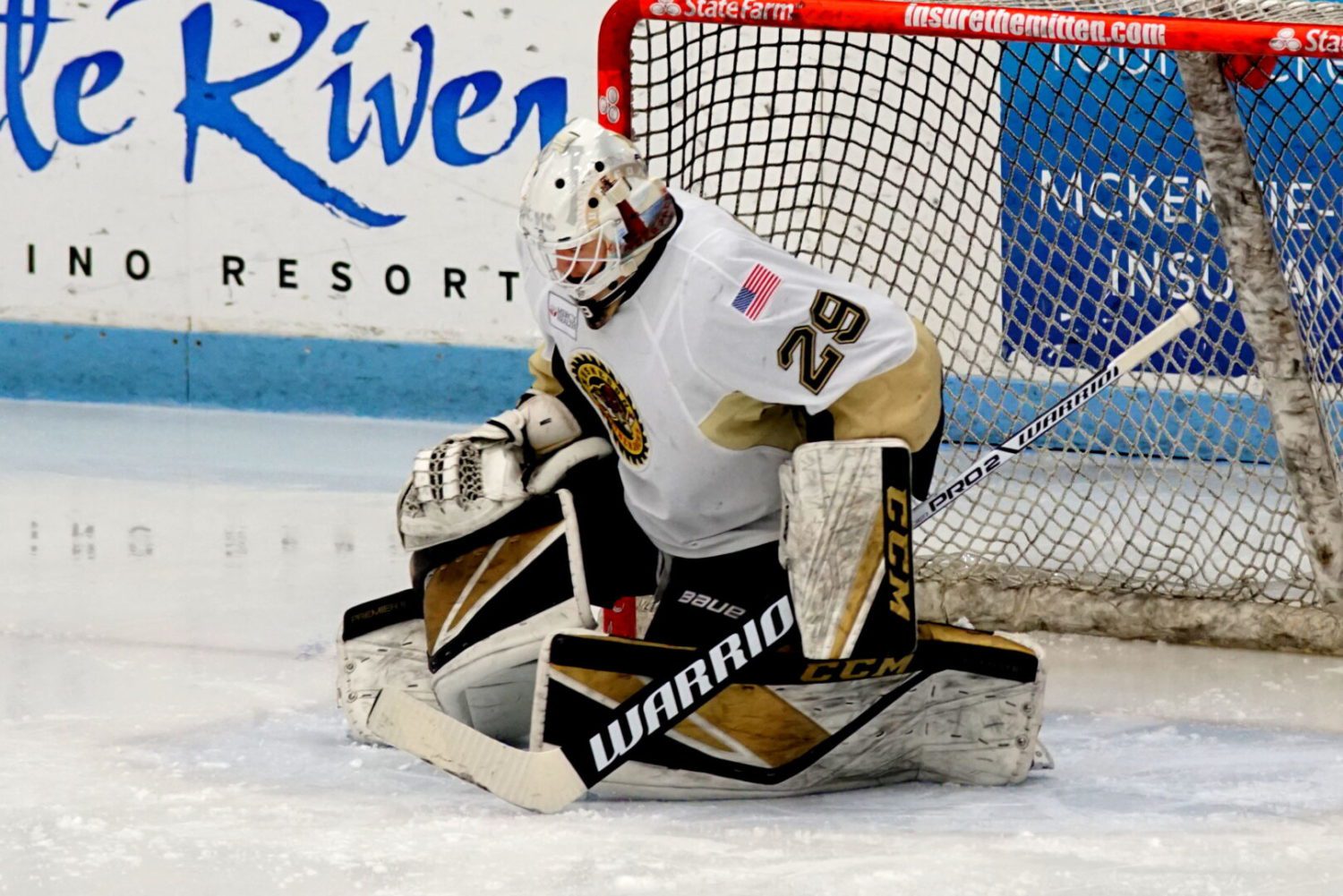 Brandon Bussi makes the save for Muskegon. Photo/Leo Valdez 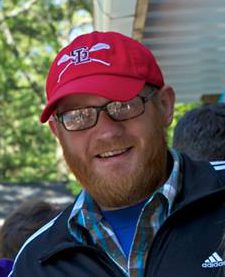