MUSKEGON – Playoff energy has a way of making players do things they don’t normally do. 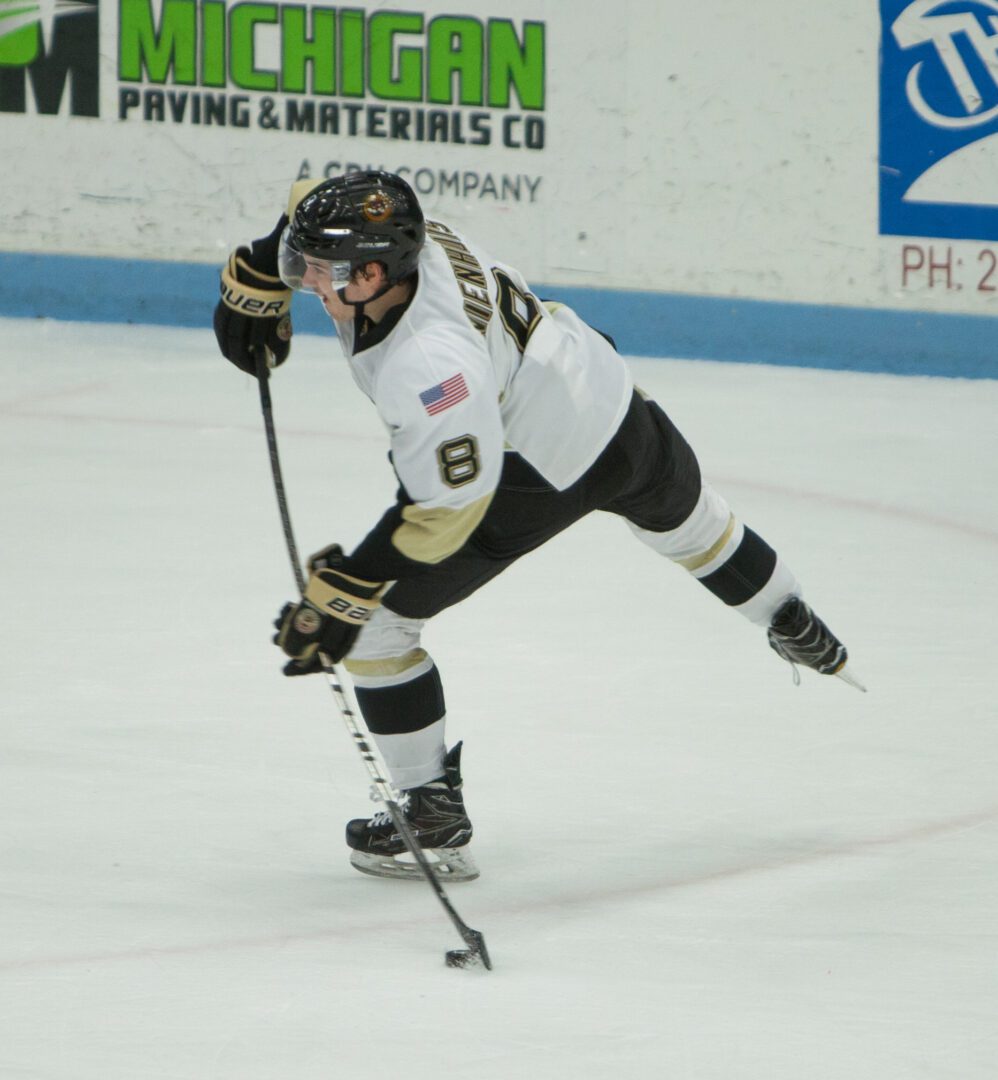 Nash Nijenhuis gets ready to wrist a shot for Muskegon. Photo/Jason Goorman

Bukes is a very solid defenseman who also puts up a lot of points with assists, but he only scored six goals in the regular season.

But he was the goal-scoring hero and No. 1 star on Sunday, scoring twice to lead the Lumberjacks to their second impressive playoff victory in two days, 5-1 over the Dubuque Fighting Saints at L.C. Walker Arena.

Muskegon now leads the best-of-5 Eastern Conference quarterfinal series two games to none. The Jacks can complete the sweep on Tuesday in Game 3 in Dubuque. Game 4, if necessary, would be Wednesday in Dubuque, and Game 5 would be Saturday in Muskegon.

Bukes’ two goals, midway through the first period and early in the second, proved to be the game-sealers for the Lumberjacks, who led 2-1 when he started to find his range.

Both goals were long shots from the point that found their way through traffic and past Fighting Saints goalie Matthew Thiessen.

“It’s been a while, probably not this season, I don’t think in this league ever,” said Bukes, when asked to recall the last time he scored twice in a game. “This playoff energy brings a whole different style of hockey. We’re all bought in, all hungry, and ready to win that Clark (Cup).”

Bukes also had a huge defensive contribution early in the third period when Muskegon goalie Brandon Bossi was caught out of position for a brief moment, and Dubuque had a clean shot at the net.

Bukes and fellow captain Nolan Sullivan both dove in and played substitute goalie, stopping several shots that would have put the Fighting Saints back in the contest.

”Sulli and I just slid through the crease, Bussi was scrambling for the puck, and we made one big save, two big saves,” Bukes said. “It was one of us, I don’t know who.” 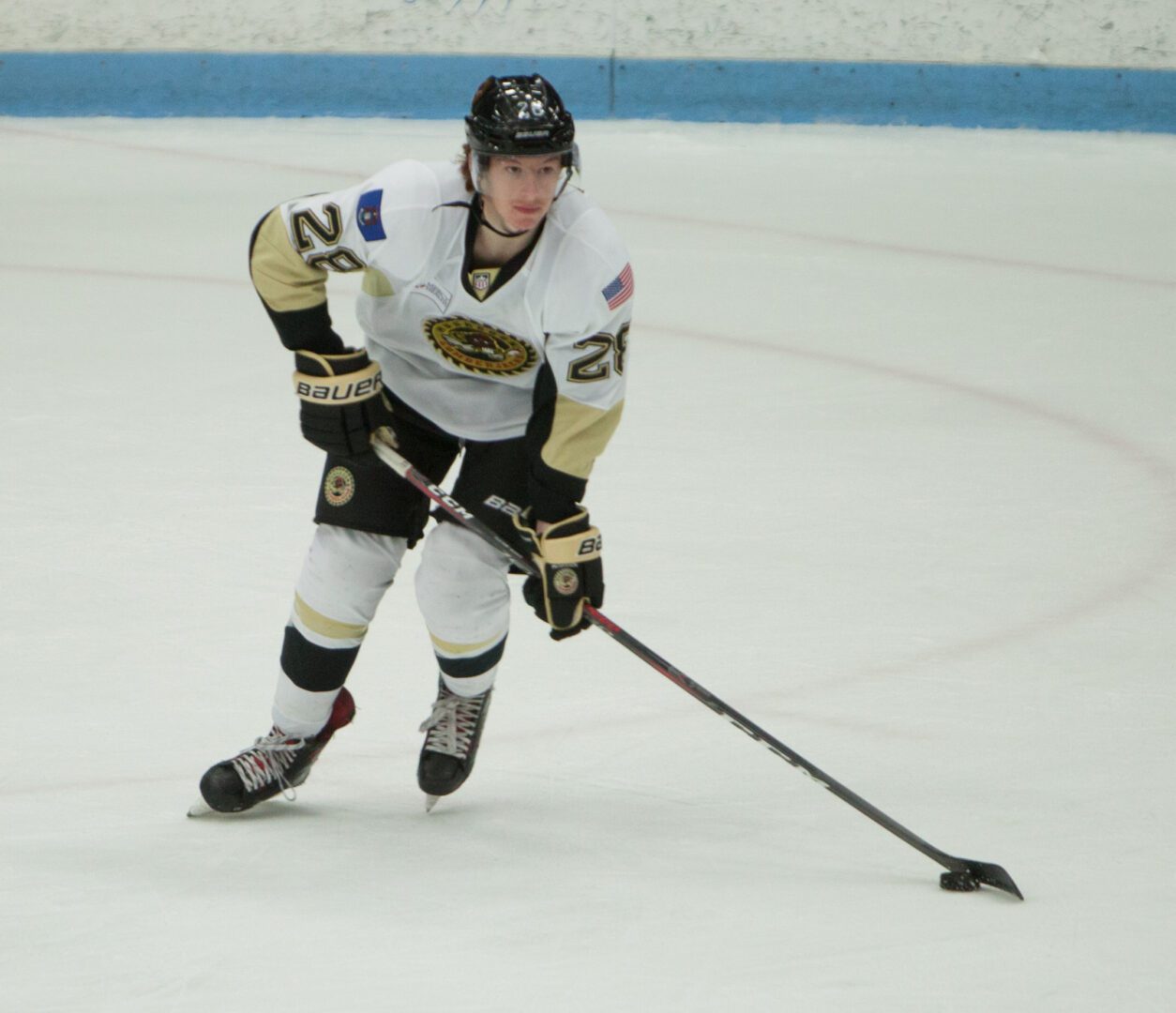 Muskegon’s No. 28 Hank Kempf controls the puck in the Lumberjacks’ zone. Photo/Jason Goorman

The Lumberjacks continued their two-game domination of Dubuque, outshooting the Fighting Saints 43-22 in the contest. They also continued their impressive special teams play, holding the visitors to just one goal on five power-play opportunities.

The home team drew first blood at 2:10 of the first period when leading scorer Egor Afanasyev, stationed in front of the Dubuque goal, took a beautiful backhand pass from Mikael Hakkarainen and drove it home.

Dubuque tied the score 1-1 with a power play goal from Jacob Semik less than a minute later.

Muskegon went ahead for good at 4:33 of the first period when Bobby Lynch scored with a high wrist shot from the top of the circle, giving the Jacks a 2-1 edge. Bukes followed with his first goal at 8:08, and the Jacks led 3-1 at the first break.

Bukes scored again just 59 seconds into the second period, and that turned out to the only goal of the period.

Ryan Savage scored from in front of the net at 16:20 of the third period, putting the icing on the victory for Muskegon.

Hakkarainen and Alex Gaffney each had two assists for the Lumberjacks.

“That was awesome,” said Muskegon Coach Mike Hamilton, whose team beat Dubuque 4-0 on Saturday. “We were a little nervous about how the guys would respond after playing a great game on Saturday, and they responded and took it to them again. The first period was very important. We knew they would be coming out with their best, and we won the first period. 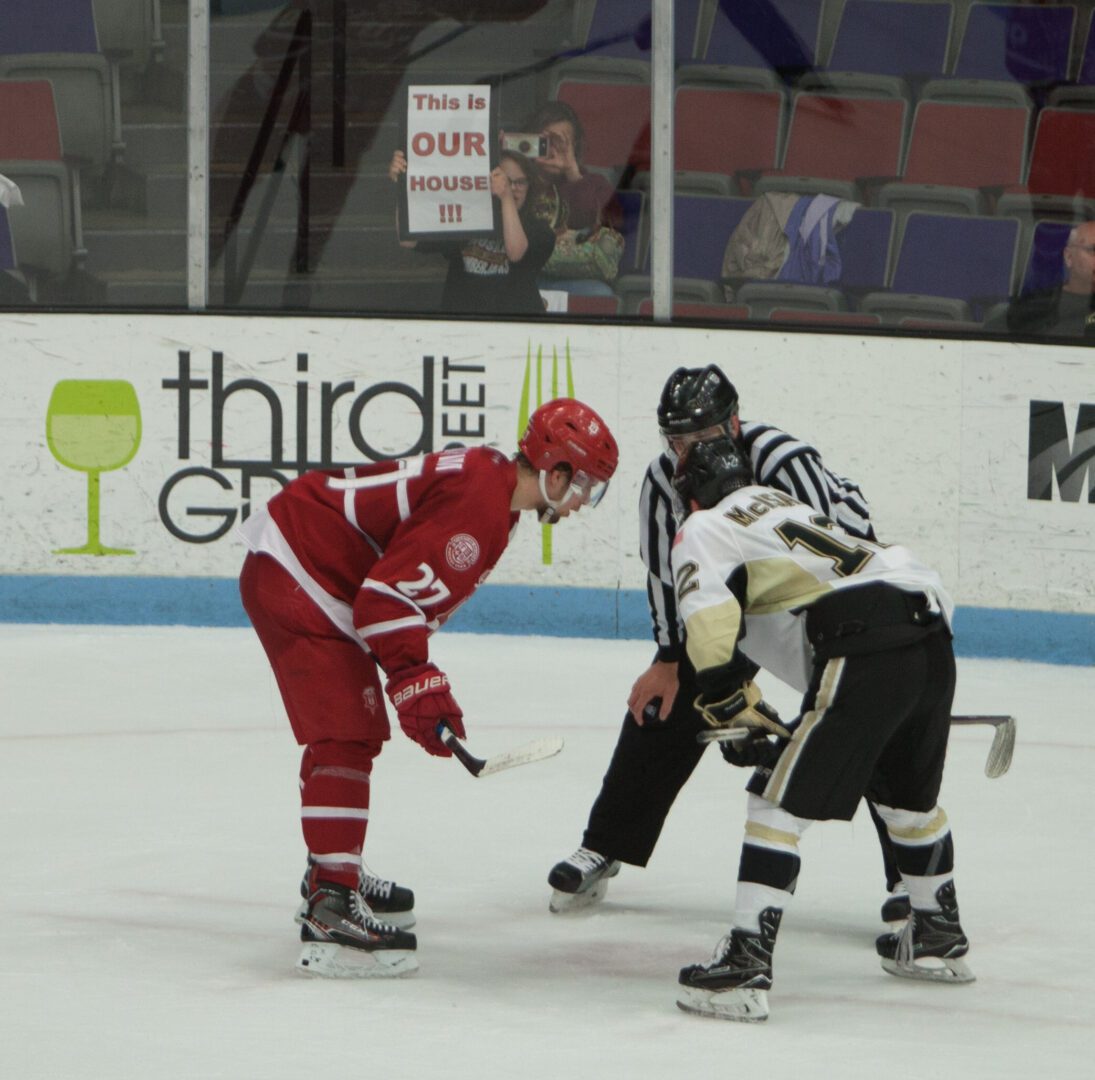 Muskegon’s No. 12 James McIsaac gets ready for a faceoff against Willie Knierim. Photo/Jason Goorman 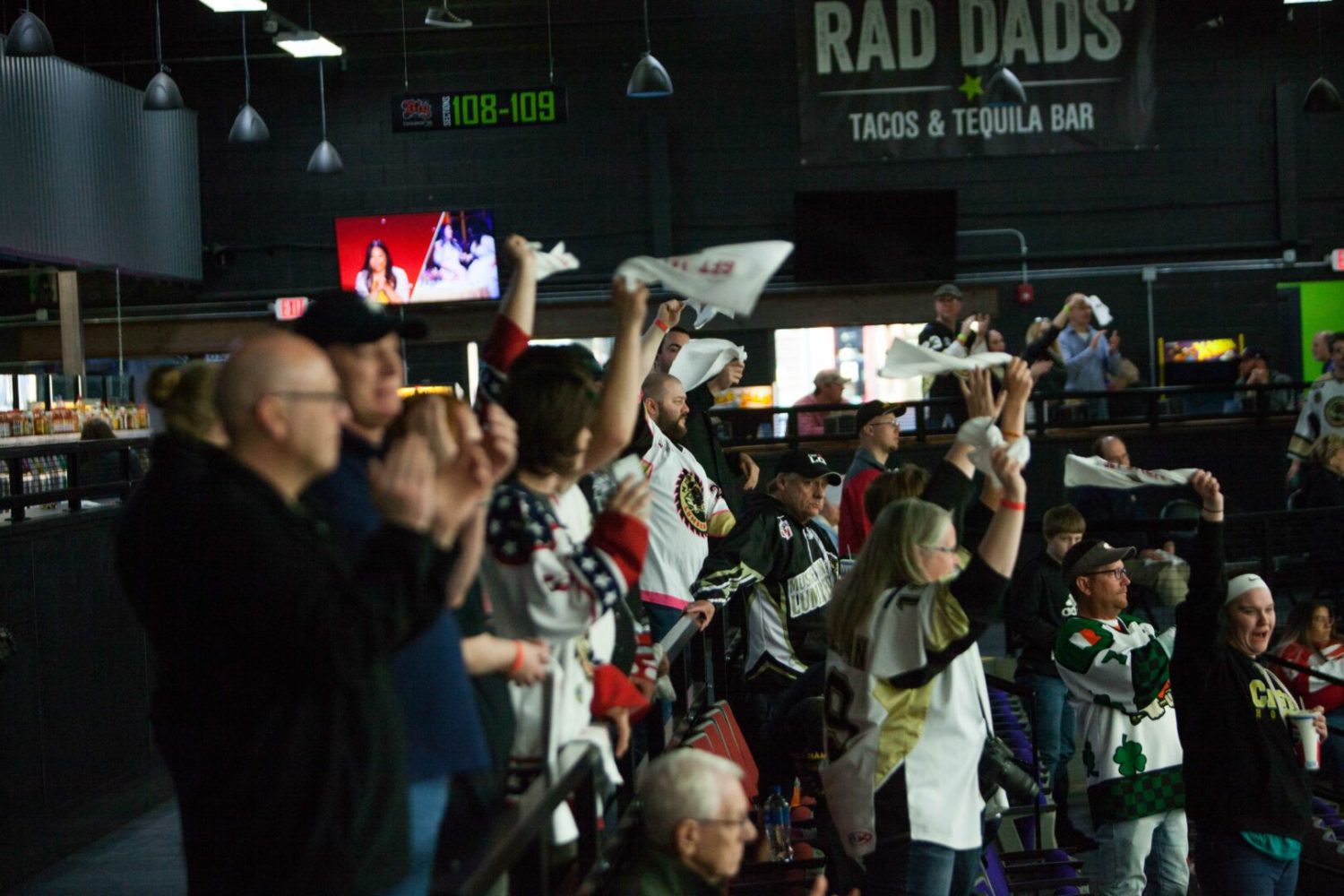 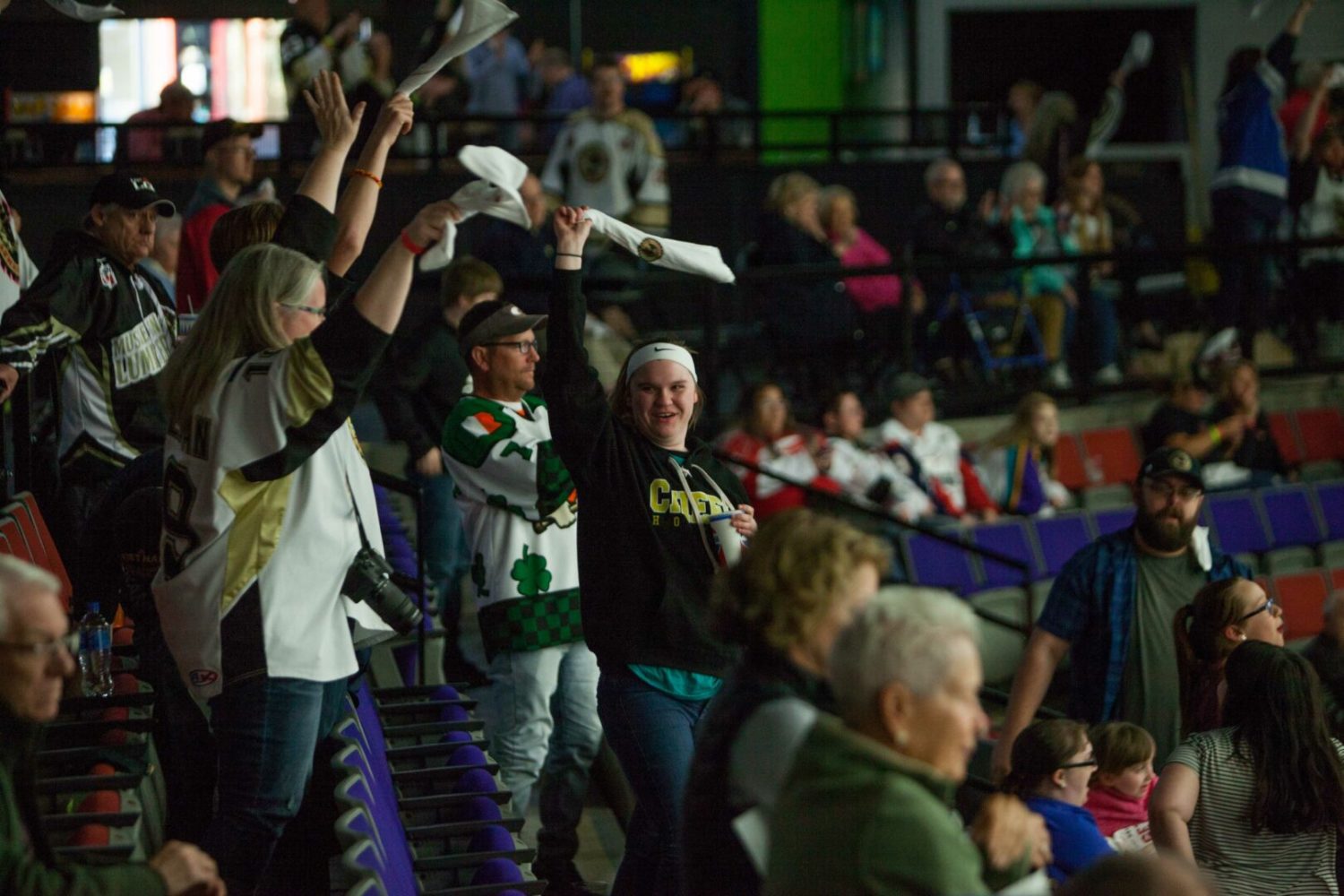 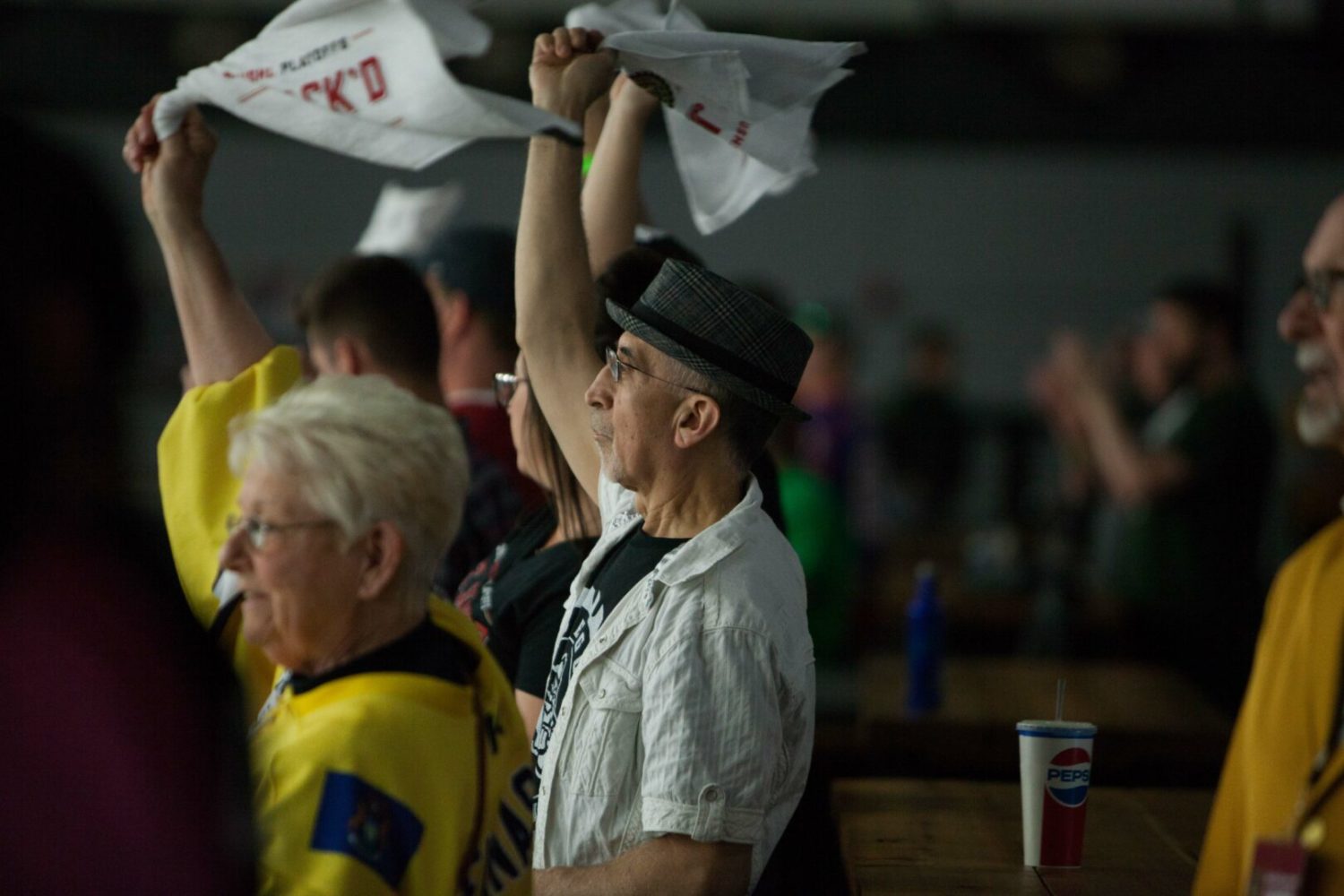 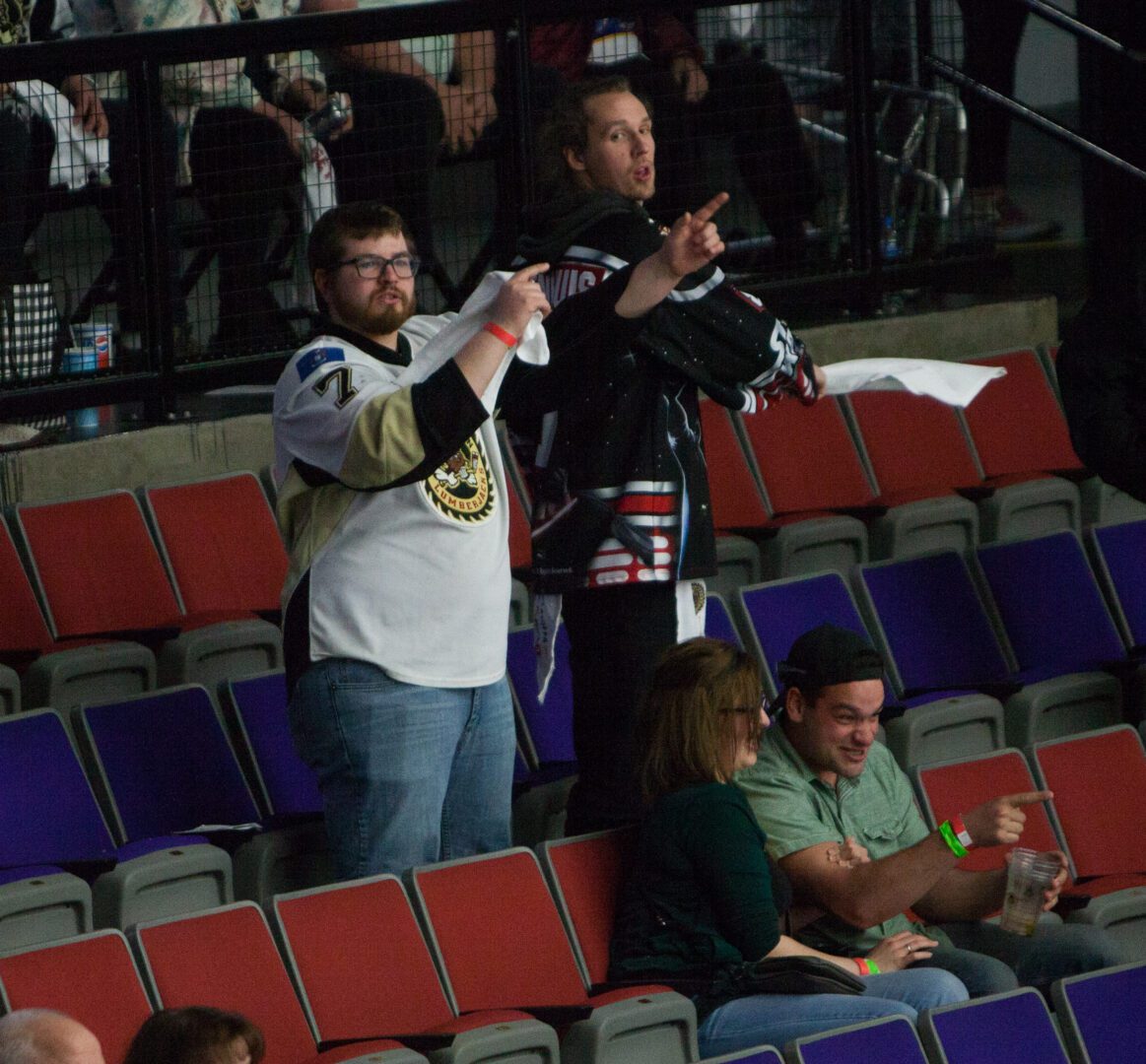