Whitecaps struggle in every part of the game Saturday, fall 10-1 to Great Lakes

The West Michigan Whitecaps fell 10-1 at home to Great Lakes on Saturday.

With the loss the Whitecaps fall to 5-5 overall on the year and are two games behind Lake County for first place in the Midwest League Eastern Division.

West Michigan fell behind quickly on Saturday when Great Lakes scored two runs in the first and three runs in the second.

The Loons then added two runs in the fifth inning and three runs in the sixth inning to hold a commanding 10-0 lead.

The lone Whitecaps run came in the seventh inning when Ulrich Bojarski hit a sacrifice fly to right field that scored Nick Ames.

No Whitecap batter had more than one hit in the loss on Saturday while starting pitcher Gio Arriera took the loss, allowing one earned run and four unearned runs on five hits over two innings.

Overall the Whitecaps committed three errors on the day.

The Whitecaps will close out their series with Great Lakes on Sunday with first pitch scheduled for 2 p.m. 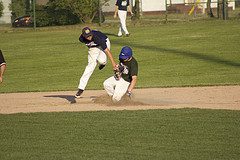