So falling behind early to Whitehall in Monday’s West Michigan Conference tournament championship game was no reason to panic. 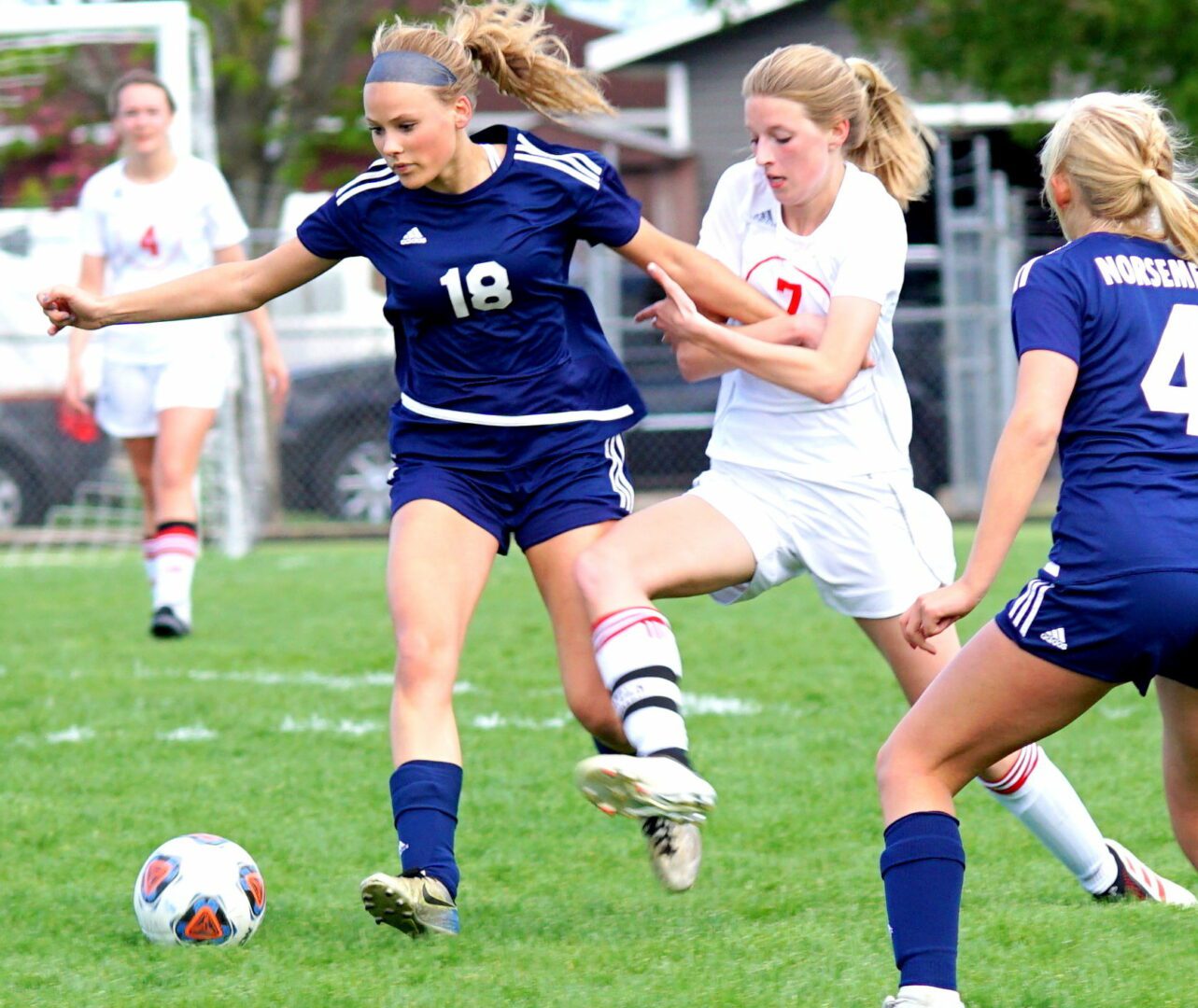 And they didn’t. The state-ranked Norse remained calm, turned on their amazing scoring machine, and rallied for a 9-4 victory over the Vikings on their home field.

Leading the way was Sophie Mueller with a four-goal performance while Gwenna Pitts added three.

“There always pressure to keep it going,” said Hoops. “Once you get to be the best, everyone is coming for you.”

North Muskegon improved to 16-2 overall on the season and 10-0 in conference play. Whitehall fell to 14-3 overall and 7-2 in the conference.

Whitehall, a talented team in its own right, definitely gave North Muskegon something to think about. 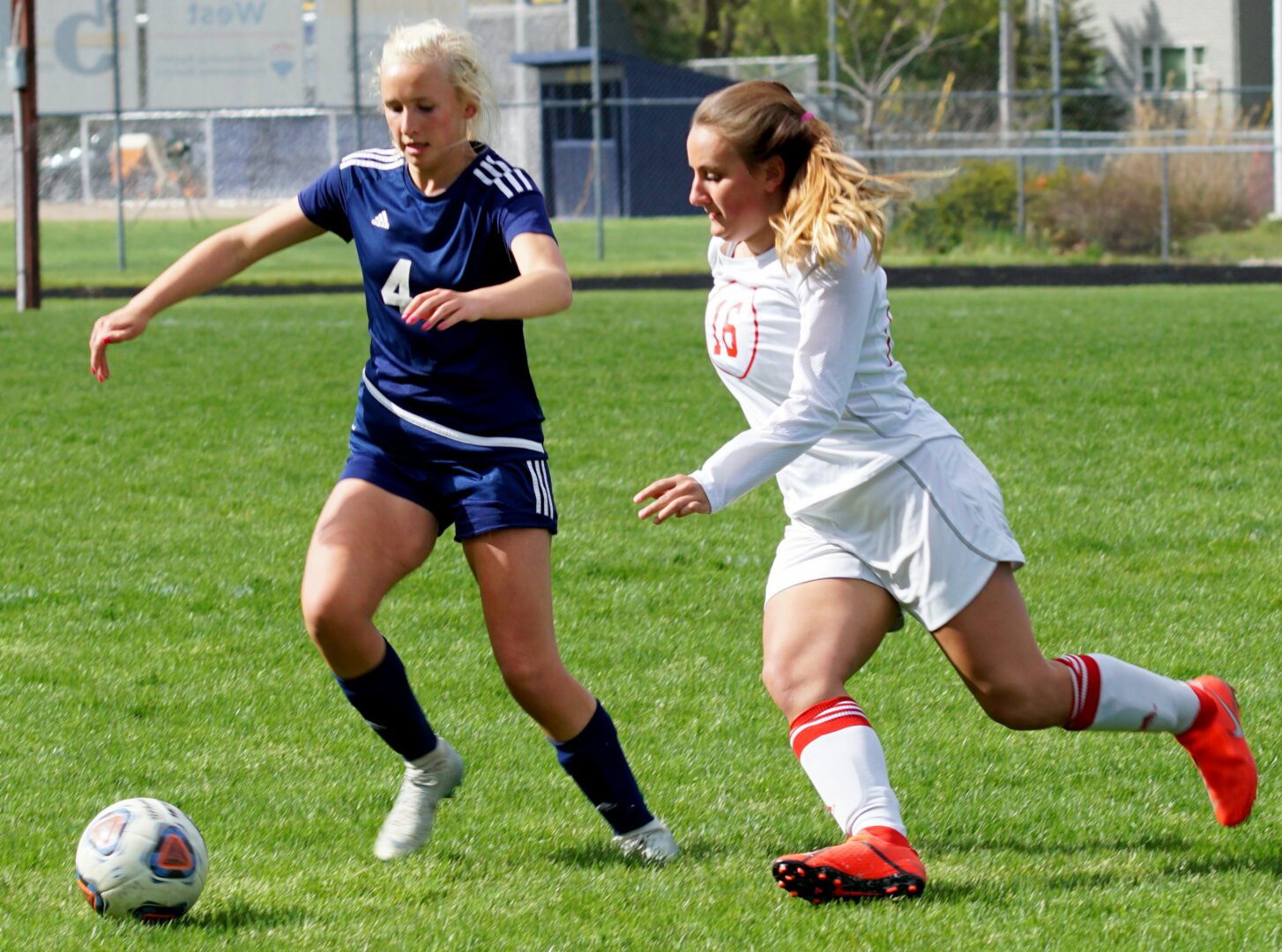 Grace Vanderwoude races for the ball against Whitehall’s No. 16 Lexus Bilek. Photo/Leo Valdez

The Vikings stunned the home crowd 10 minutes into the game when Kacey Jeffries raced down the far sideline past defenders and sent a perfect centering pass to Maggie Evans, who nailed the ball into the top right corner of the net to give her team a 1-0 lead.

But the Norse didn’t seem affected by the deficit at all, controlling the action in Whitehall’s’ end for the next six minutes.

Finally, Hope Johnson’s centering pass found Mueller, who fired the ball low and left to tie the game at 1-1 with 23:44 remaining in the first half.

North Muskegon scored the game’s next three goals, with Mueller making it 2-1 with 18:11 left in the half, Hope Johnson scoring on a penalty kick with 8:49 remaining, and Mueller scoring again with 6:07 left.

Jeffries scored for Whitehall about a minute later, and North Muskegon led 4-2 at halftime.

The Norse maintained the pressure in the second half, generating four shots on net in the first three minutes, and eventually scoring the next four goals. 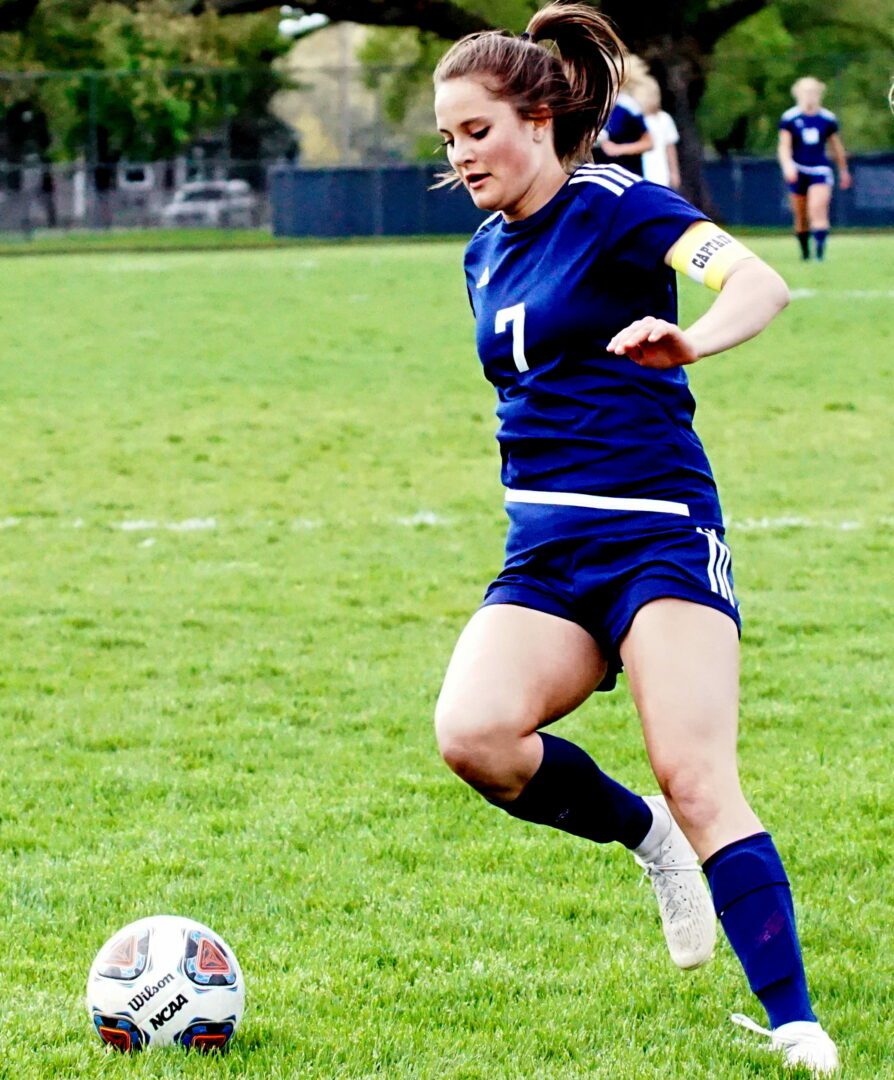 Mueller netted her fourth goal of the game on a penalty kick four minutes into the half, and Gwenna Pitts scored the next three goals in a span of 16 minutes to put NM up 8-2.

“We talked at half about being more multidimensional and moving the ball around more,” said North Muskegon Coach Ryan Berends. “When we do that, good things happen.”

Evans scored her second goal for Whitehall with 9:06 left in the game to cut the deficit to 8-3, and Emma Thompson scored on a penalty kick three minutes later to make it 8-4.

Grace Berends finished off the scoring for the Norse with 1:48 left, helping send her and her fellow seniors out with a perfect conference record.

“It’s really unique from other teams,” the Norse midfielder said. “We’re really close as a team. It’s an incredible bond.”

North Muskegon finished the game with a 19-9 shot advantage.