Field, but the most important base runners never crossed the plate. 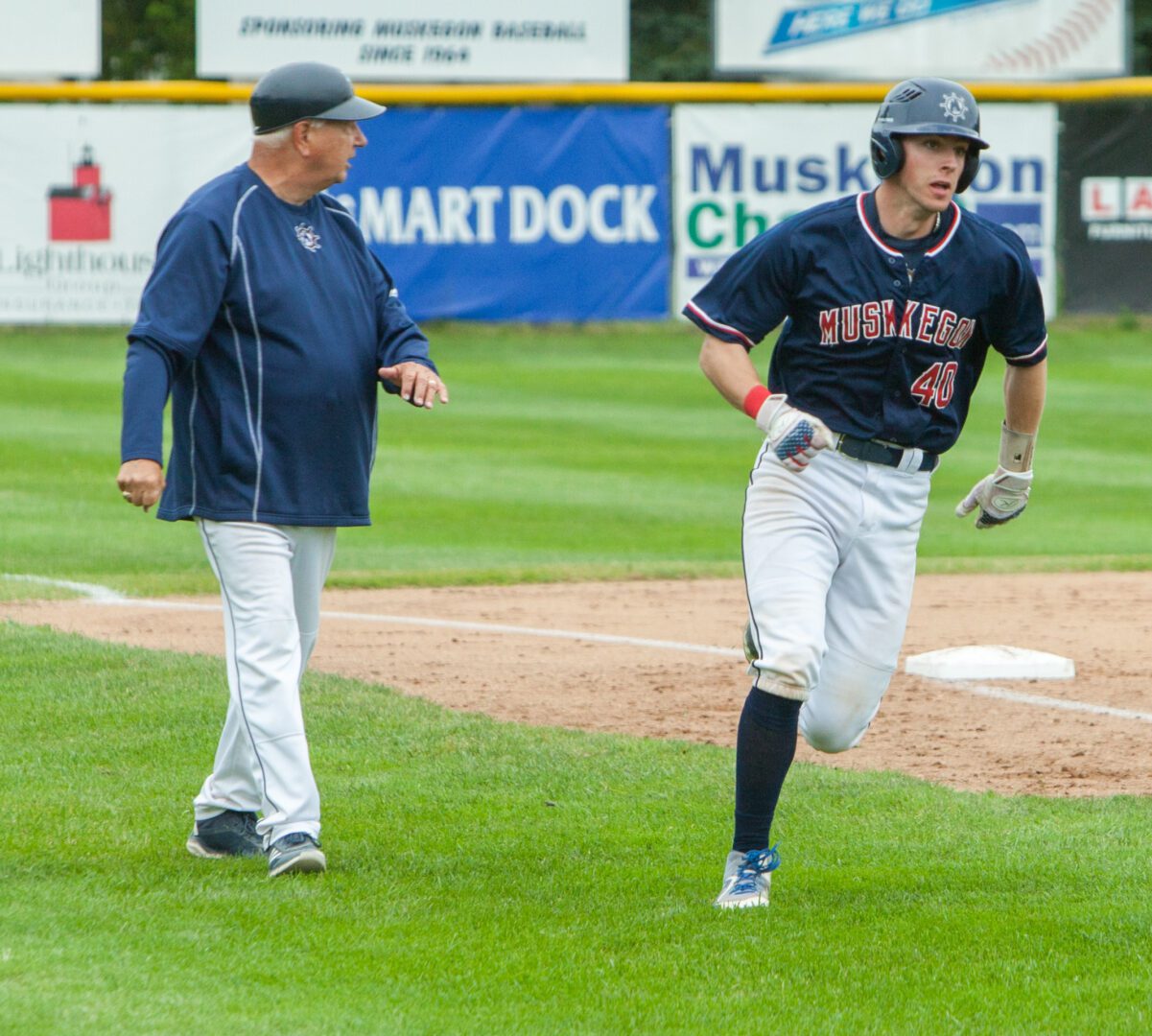 Cooper Peterson rounds third base as coach Walt Gawkowski waves him in for the Clippers first run of the game. Photo/Jason Goorman

The Clippers left 10 runners on base throughout the contest, yet still managed to put the tying run at the plate during the ninth inning.

But Muskegon couldn’t quite get it done, falling to the Galion Graders 7-5 on Sunday in the finale of the three-game home series.

The Clippers are now 5-6 on the season, good for fifth place in the Northern Division of the GLSCBL. They will continue their home stand on Tuesday night against the Cincinnati Steam. First pitch is set for 7:05 p.m.

“We just were not too opportunistic tonight,” said Clippers manager Walt Gawkowski. “We had opportunities and we just couldn’t cash in. But it has been the same story where we are just falling behind and chasing teams. But we did battle back tonight. We didn’t play great baseball this weekend, and we are better than that.”

The Graders jumped out to a 4-0 lead, scoring one run in the first inning and three in the third frame.

Galion opened the scoring with a Bryce Ray RBI single, then added runs on RBIs by Thomas Stabb, Steven Deusanio and Sean McLaughlin.

The Clippers finally scored in the bottom of the fourth inning on an RBI single from Ty Olejnik to cut the deficit to 4-1.

Galion quickly responded with a two-run single from Deusanio to give the Graders a 6-1 advantage.

Noah Hecht responded with a solo home run for the Clippers to cut the deficit to 6-2 in the sixth inning.

The Clippers continued their comeback effort in the seventh inning with a two-run single by Tre Morris to make the score 6-4.

The Graders responded with a run of their own in the eighth frame on an RBI single from Ryan Strittmather to give Galion a 7-4 lead.

Muskegon closed out the scoring in the ninth inning on an RBI single by Morris. That brought the tying run to the plate with two outs. But Hecht closed out the contest with a groundout to the third baseman. 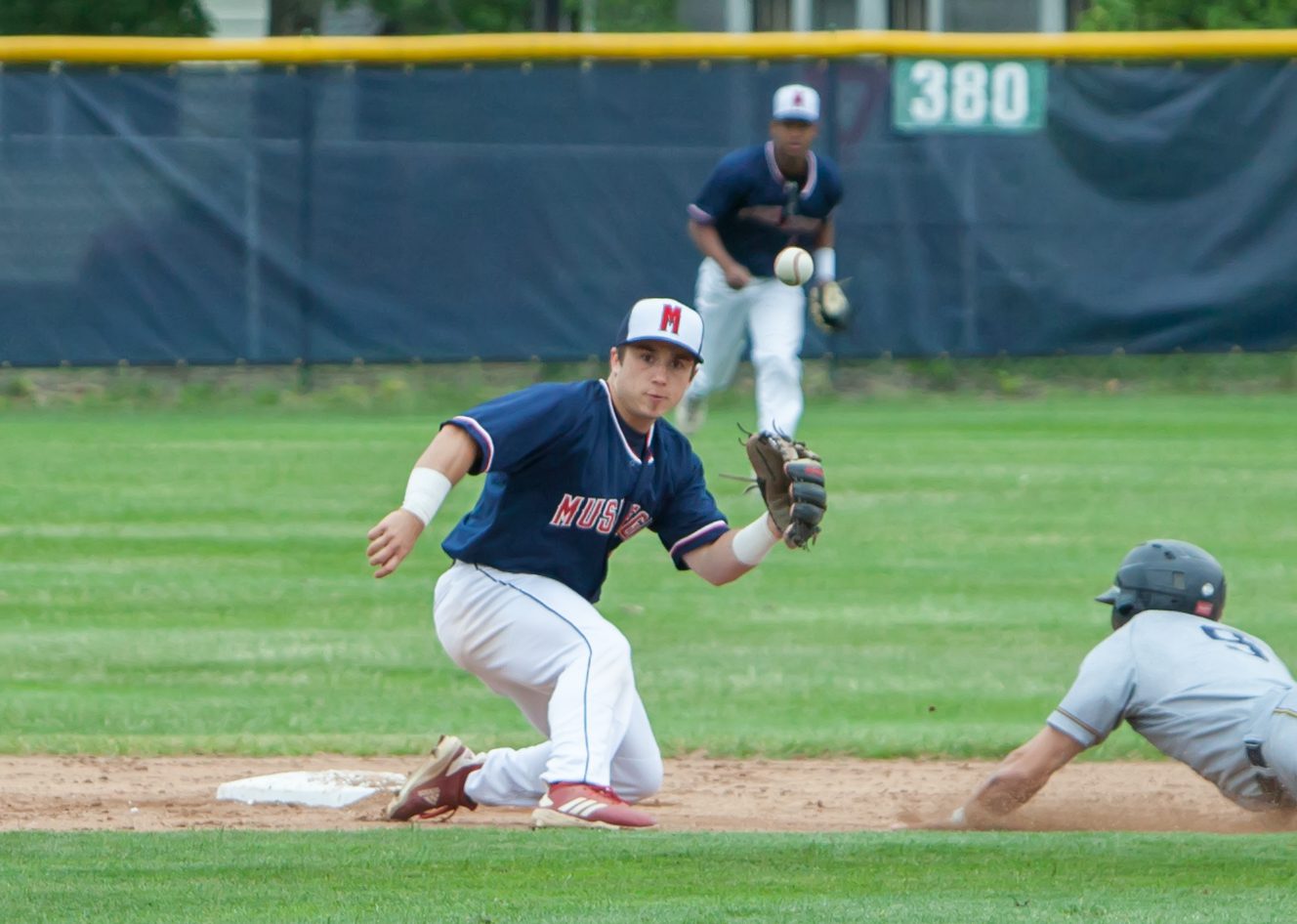 Nolan Bryant gets ready to lay down a tag at second base. Photo/Jason Goorman 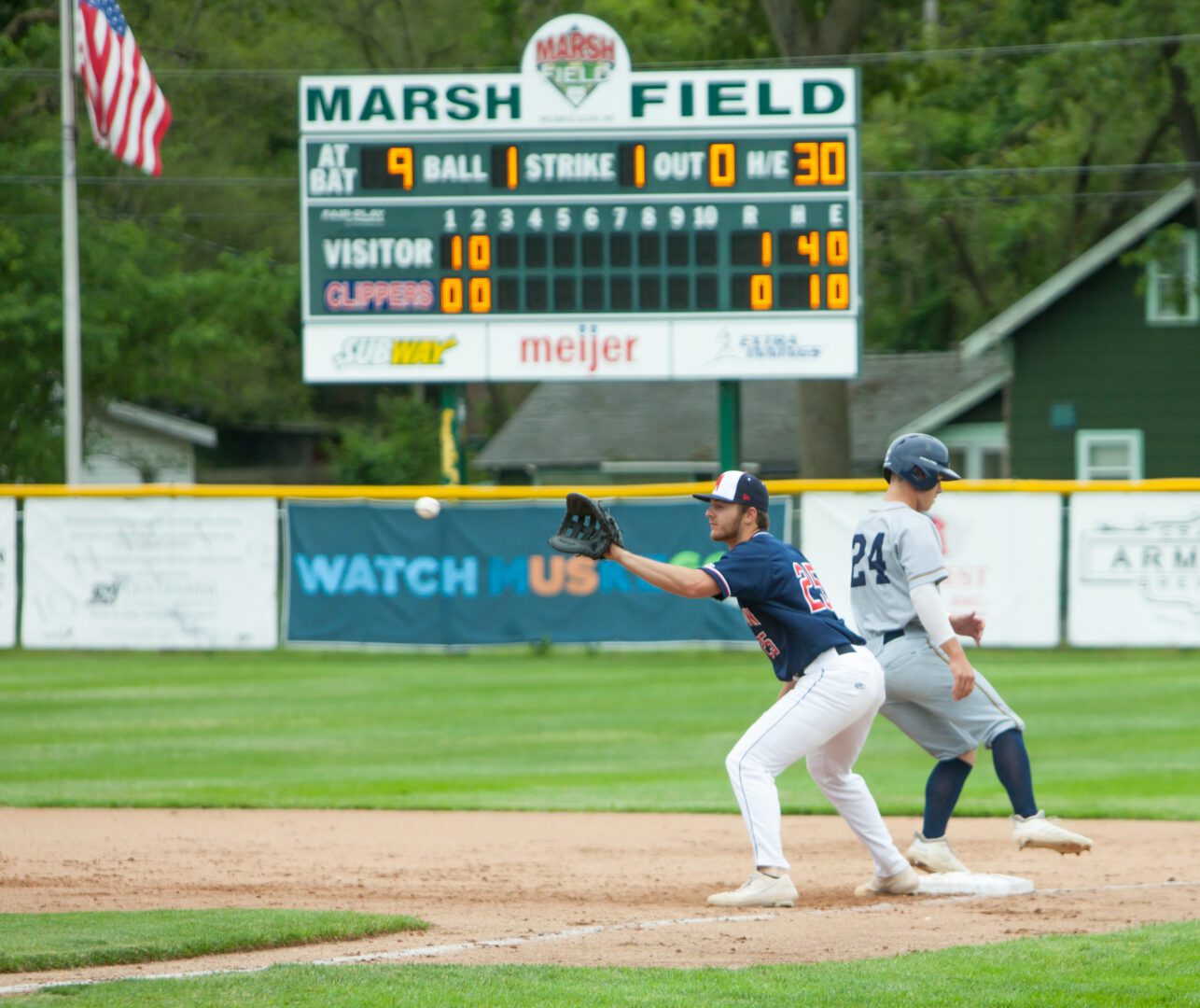 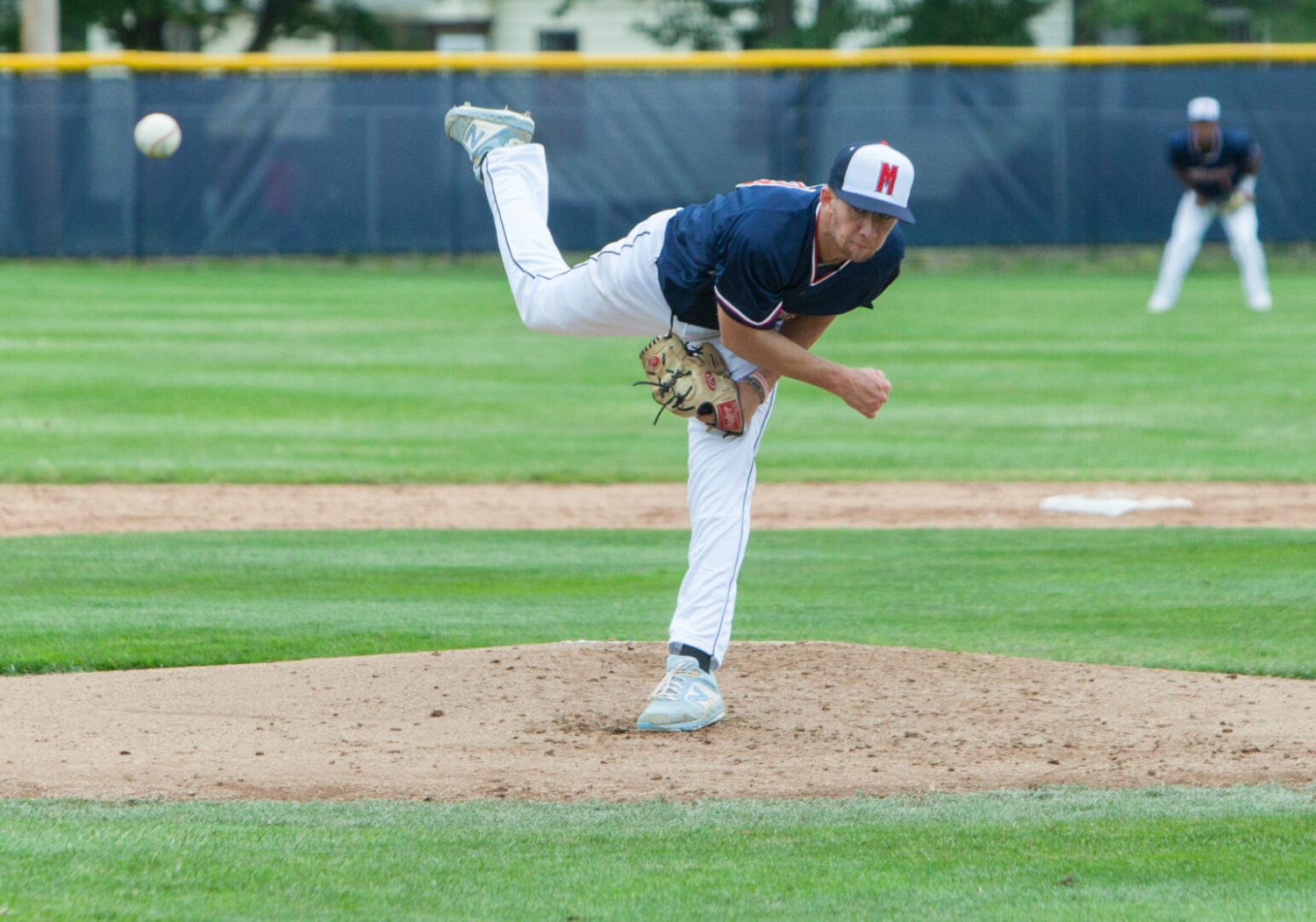 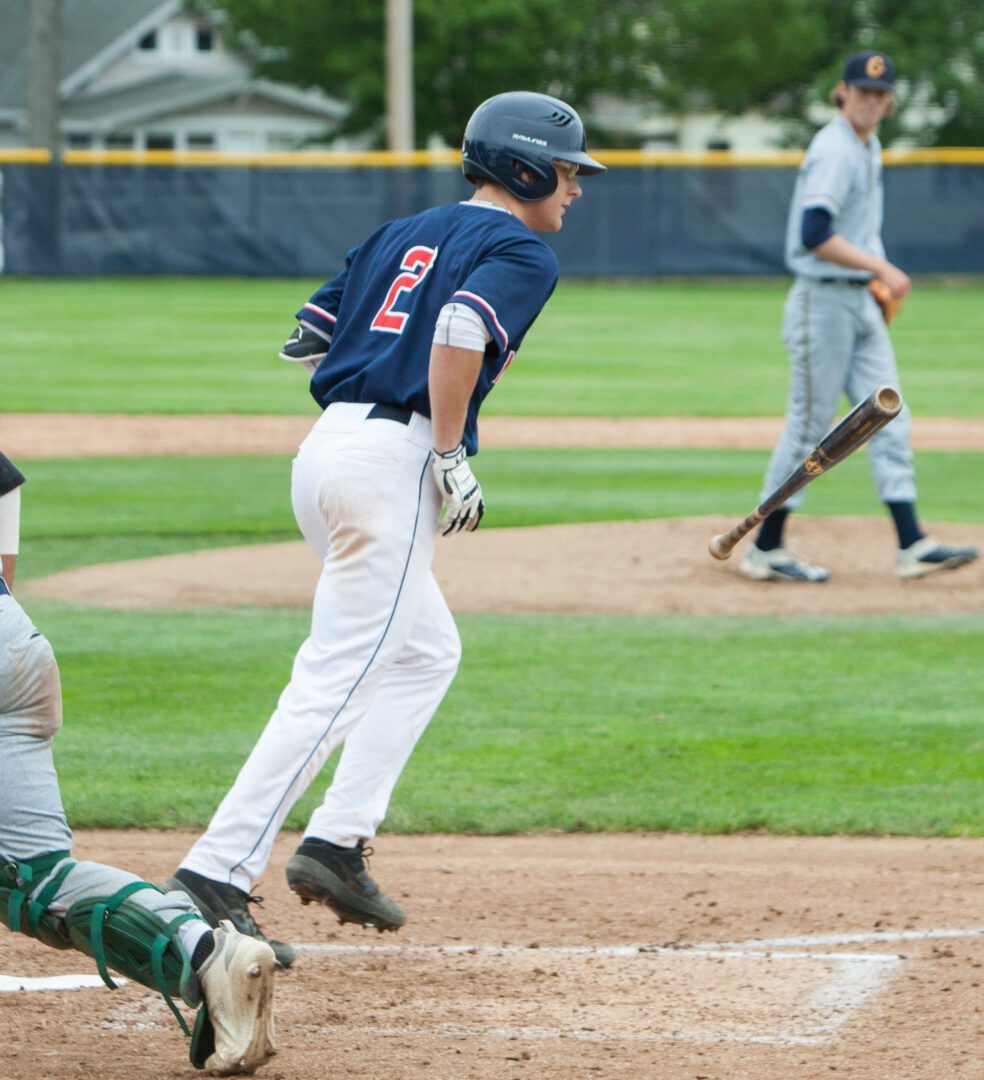 Muskegon’s Austin Eifrid takes first base after getting hit by the pitch. Photo/Jason Goorman