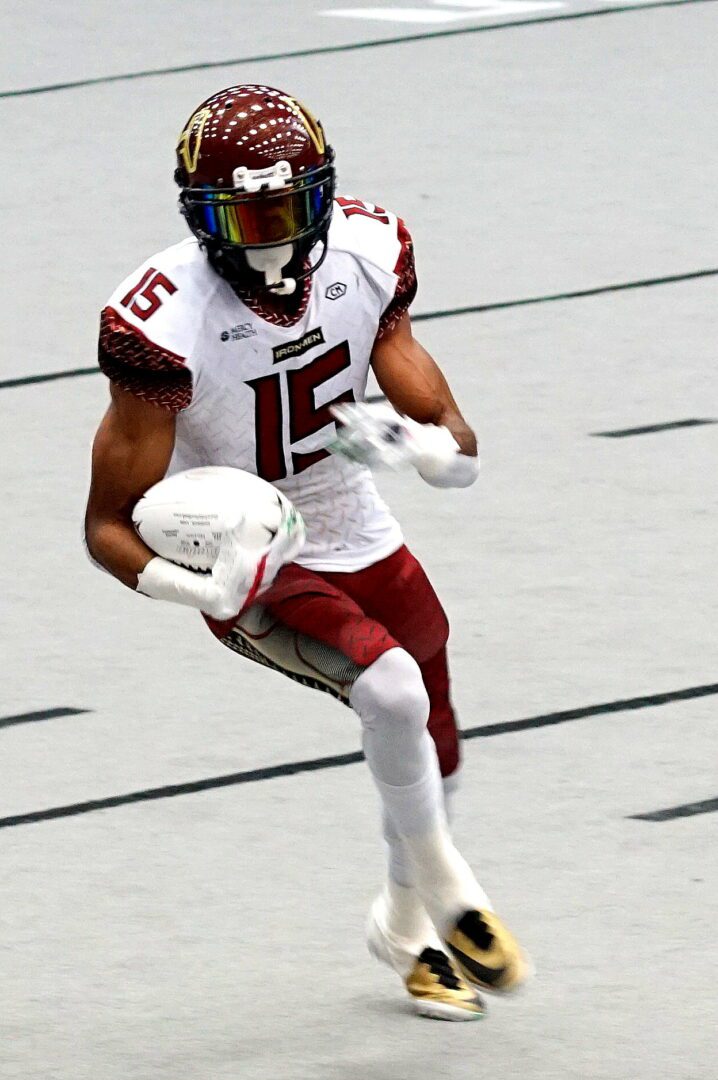 Now they will get a shot at the one team that handed them a loss this season.

West Michigan rolled to a 71-0 win over Indianapolis at L.C. Walker Arena Saturday and advanced to the second round of the AAF playoffs next week at West Virginia.

The Ironmen will face the Roughriders, a 57-13 playoff winner over Jersey, and a team that beat West Michigan 33-28 earlier this season.

“They are a great team and a great organization,” Ironmen coach Nate Smith said. “Obviously it’s a game we’ve been looking forward to since we last played them.”

West Virginia may not be looking forward to seeing the Ironmen, or their defense.

West Michigan held Indianapolis to minus-51 yards in the game, minus-55 on the ground.

“I’m really proud of what we did tonight,” Smith added. “Our defensive line is pretty special and our defensive coaching staff does a good job of getting them prepared.”

Facing a team they beat 62-12 last week, the Ironmen didn’t overlook their opening round playoff opponent.

Instead, they picked up where they left off.

Jeremiah Mullinax took the opening kickoff and pitched it to Marcus Smith, who returned it 25 yards for a 7-0 West Michigan led 18 seconds into the game.

Dakota Smith scored from three yards out on the next possession, then quarterback Michael Whitley hit Deonte Moore from 13 yards out and the Ironmen led 19-0 after one quarter. 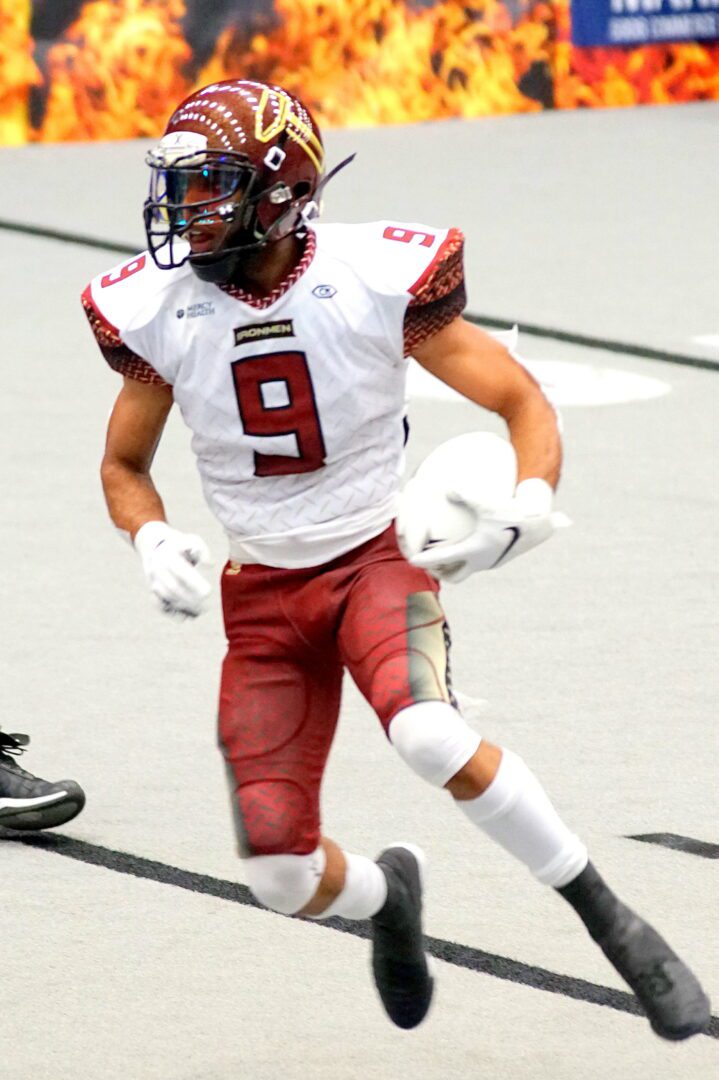 The lead increased to 39-0 by halftime as the Ironmen got a safety with an end zone sack, and Whitley threw two TD passes, one to Marcus Smith and one to Carrington Thompson, Sr.

“This was a good opportunity to get him some looks and some reps,” Smith said of Whitley. “He’s new to the arena game, but he had a great week of practice and played really well.”

A four-yard touchdown run by Corey Johnson finished off the scoring in the fourth quarter.

“I’m really proud of how the guys came out here and played,” Coach Smith said. “It could’ve been tough to come out here motivated, but we’ve got a job to do and we played really, really well.”

West Michigan finished the game with 230 total yards, and Whitley was 13-of-21 passing for 174 yards. 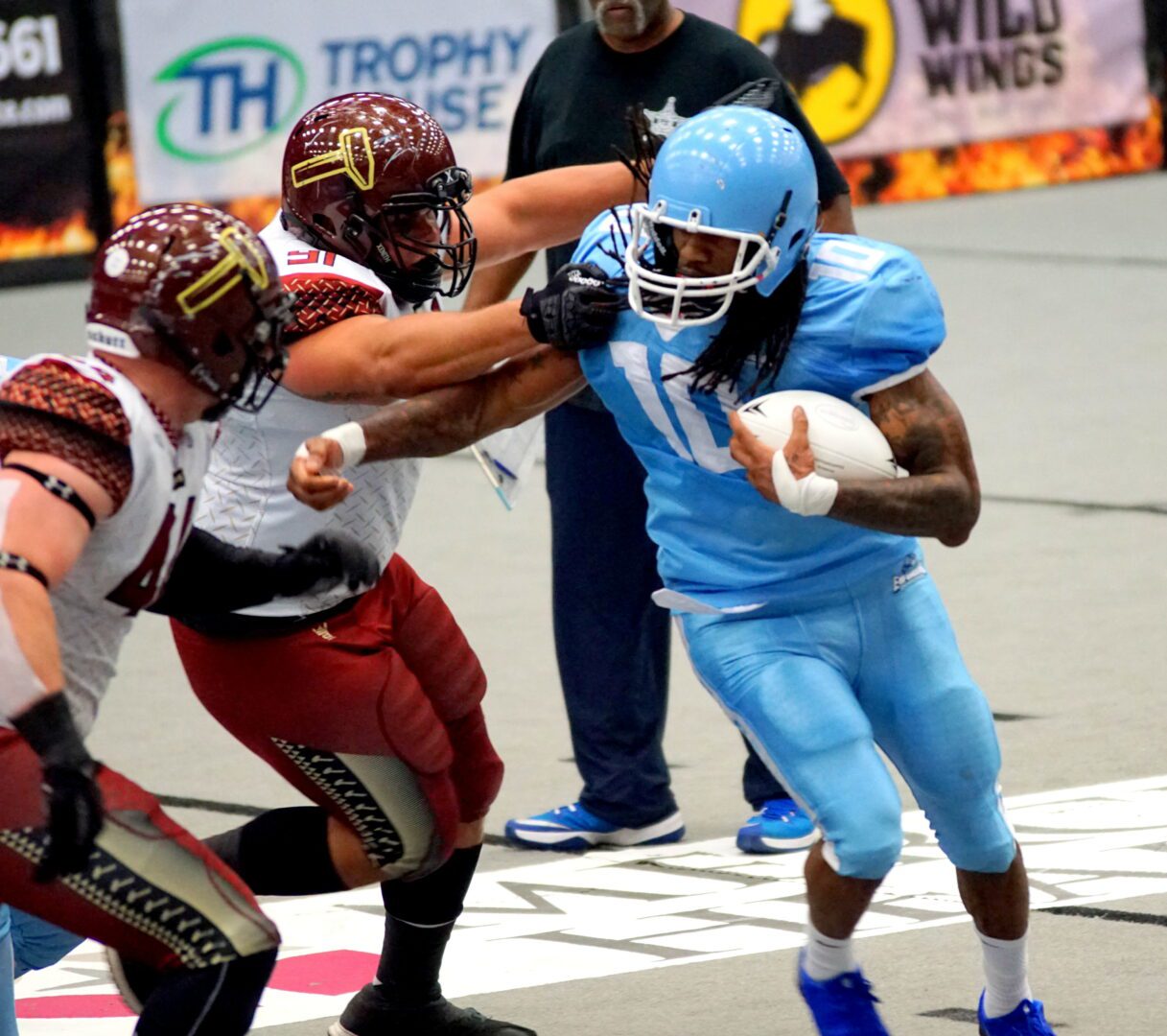 Muskegon’s No. 81 Ryan Armstrong brings down the Enforcers’ No. 10 Marcus Richardson. Photo/Leo Valdez