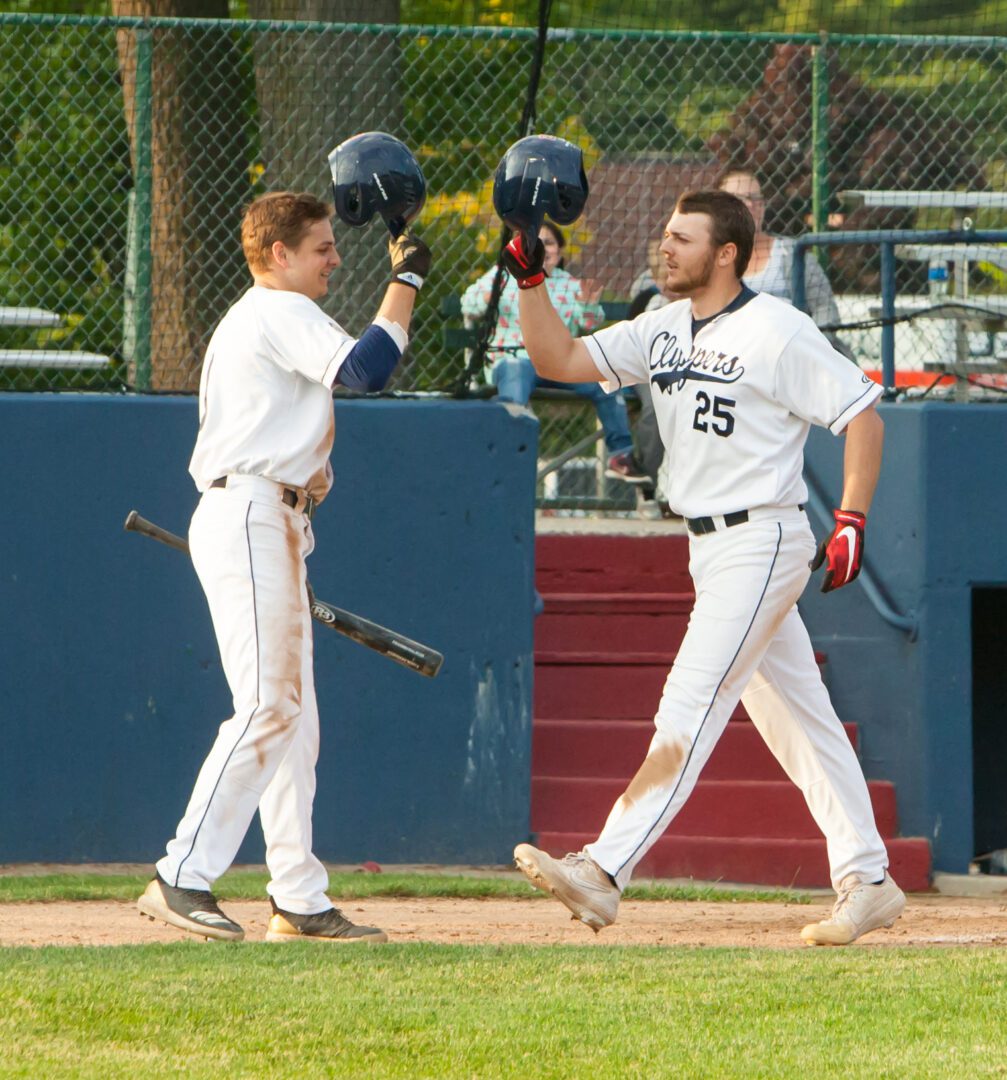 No. 25 Brian Martin is congratulated at the plate by teammate Jimmy Allen after belting the Clippers first homer of the season. Photo/Jason Goorman

But the Clippers managed to kill two late rallies and held on for a 6-5 victory over the Michigan Monarchs on Tuesday at Marsh Field in their 2019 season opener.

It was hard to use the team’s performance to venture a guess on how the season might go. The Clippers came out flat offensively, but still managed to score six runs on just three hits.

“Overall I thought we defended well, and we are just happy to get a win,” said Clippers manager Walt Gawkowski, whose team will host the Monarchs again on Wednesday in the second game of the three-game series. “It’s never going to be easy in this league.”

“I think offensively this team is going to be really good,” the manager added. “We weren’t great tonight, but we are going to be, so that’s the least of my concerns. Obviously sometimes it’s not how many you get, but when you get them and how far they go.”

Muskegon trailed 1-0 after allowing a solo home run to the Monarchs’ Gavin Doyle in the second inning.

The Clippers finally cracked the scoreboard in the fourth frame on a single by Jimmy Allen, followed by a two-run homer from Brian Martin.

“I was facing a college teammate,” said Martin, who plays his college ball at Michigan State. “I figured he was going to throw me a fastball and he threw it.”

The Clippers increased their lead to 3-1 in the fifth inning on a sacrifice fly by Rob Zurawski, scoring Ty Olejnik. 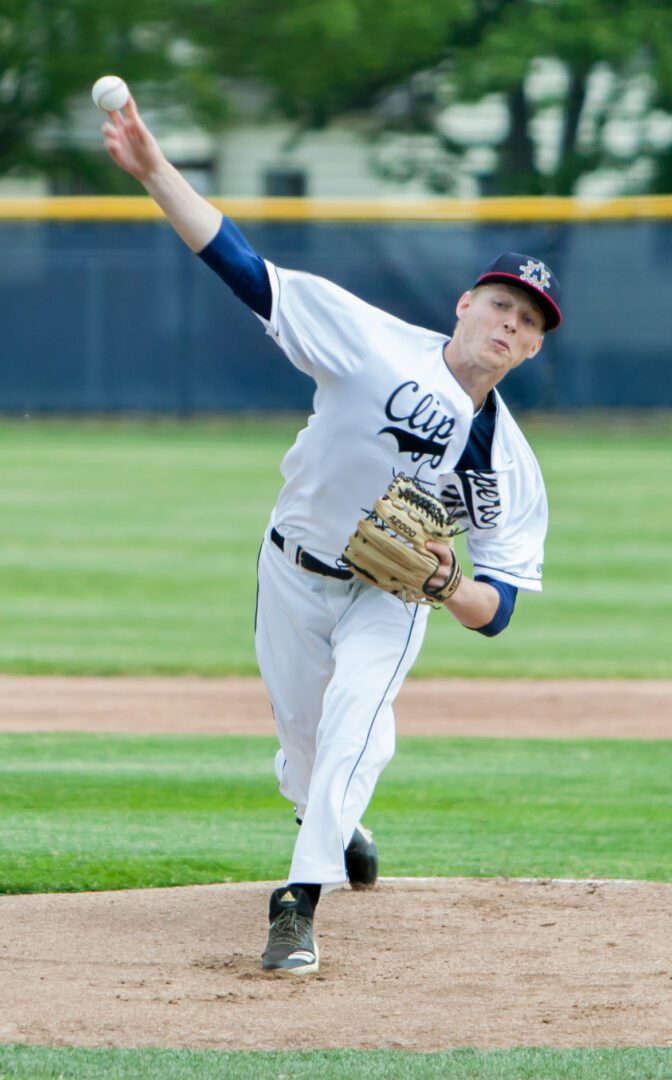 Shane Easter increased Muskegon’s lead to 5-1 with a two-run homer in the seventh inning.

The Clippers scored their final run on a sacrifice fly by Zurawski later in the seventh.

The Monarchs fought back in the eighth inning, scoring two runs to cut their deficit to 6-3. They had the bases loaded with two outs before lining out to Clipper first basemen Martin to end the threat.

The Monarchs kept pushing in the ninth inning with two outs, scoring on an RBI single by Doyle and on a Muskegon error.

They had the tying run at second base and the go-ahead run at first before Mitchell Smith struck out to end the contest.

Clippers starting pitcher Brady Miller had a no-decision, tossing four innings while allowing one run on five hits and striking out eight batters.

Muskegon’s reliever Dane Ambrustmacher got the win, throwing 3 2/3 innings while allowing two runs on four hits. Closer Antonio Walker managed to get his first save of the season in one inning of relief. 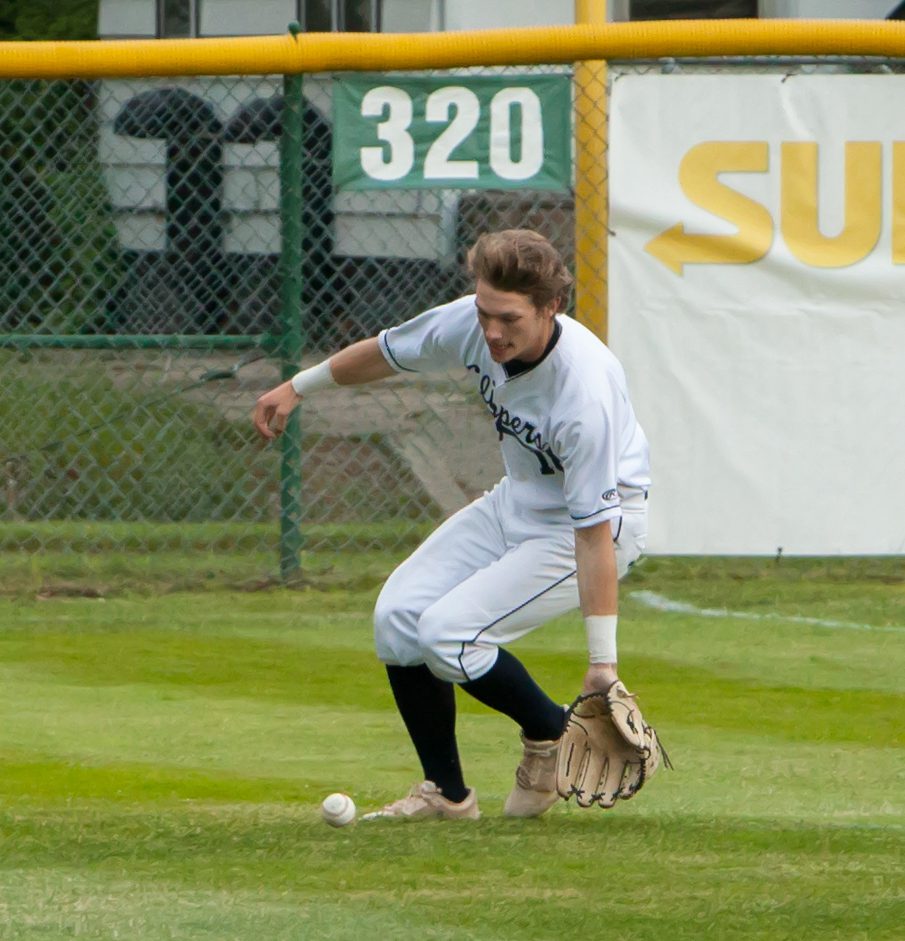 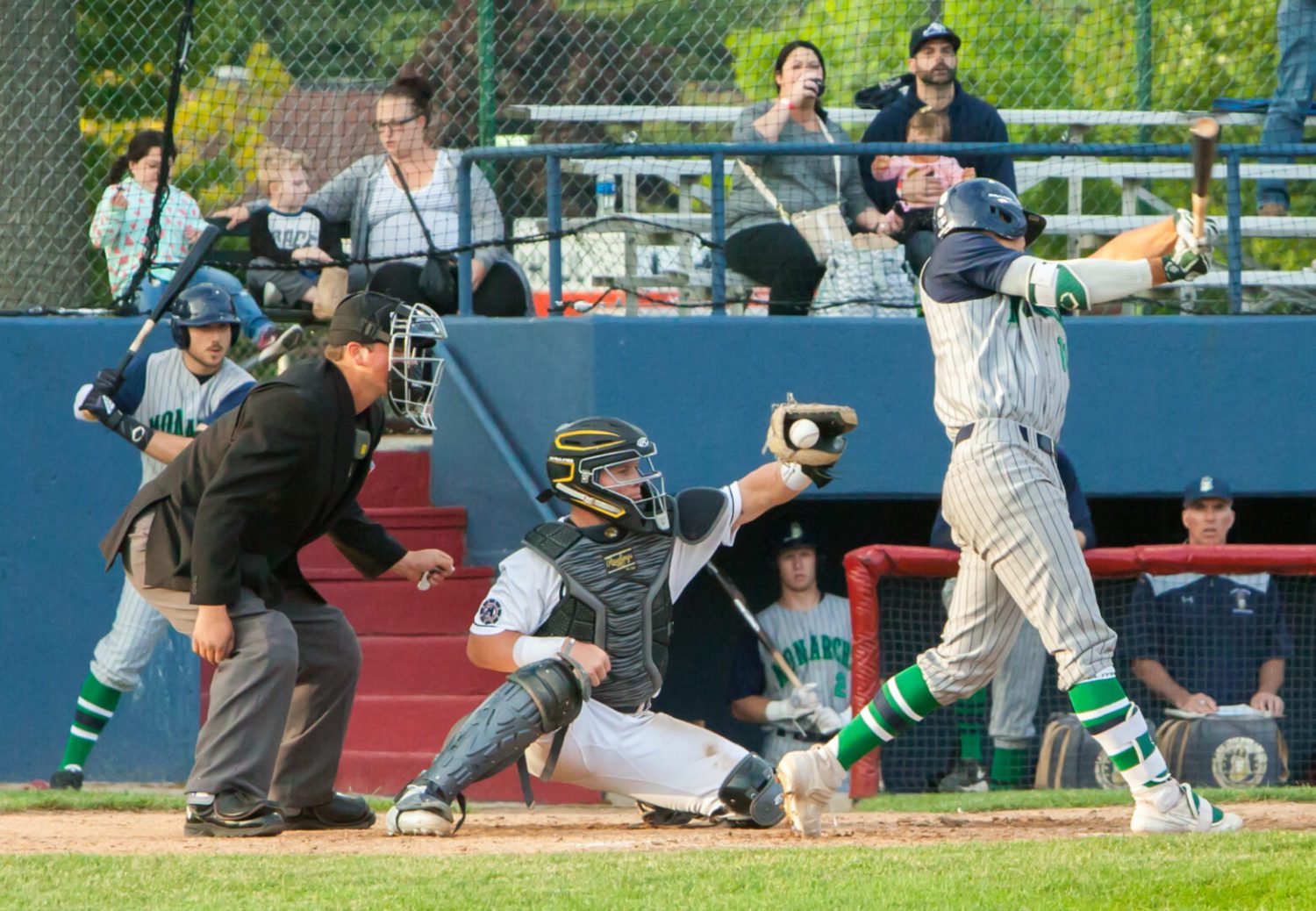 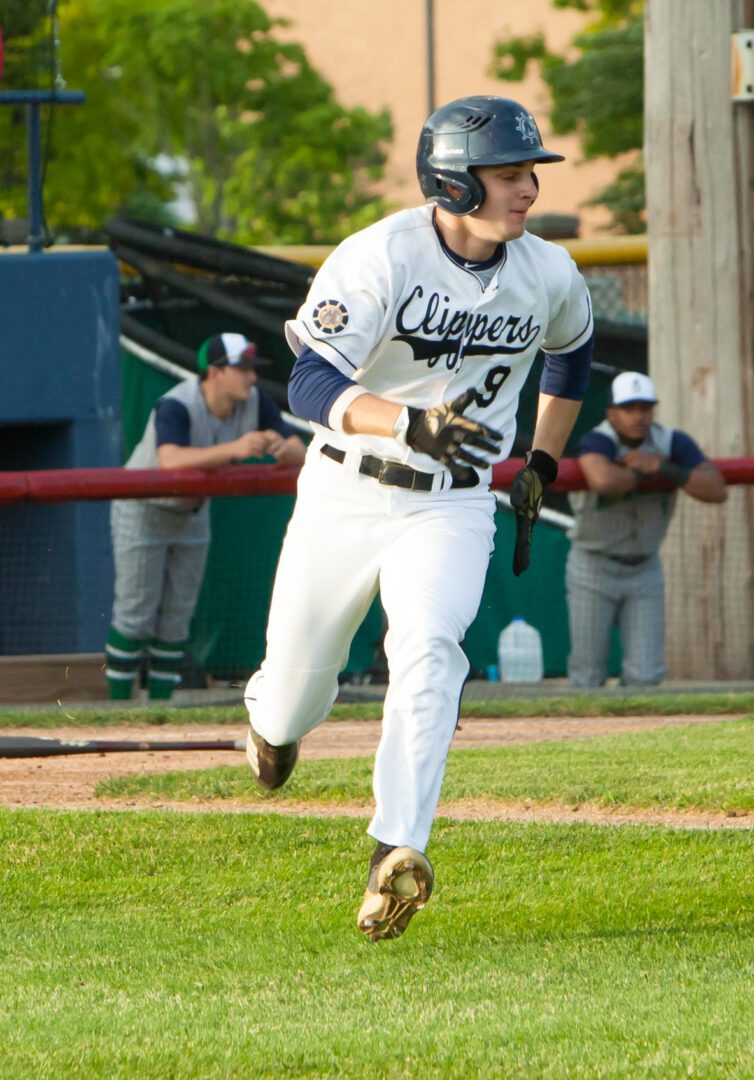 Jimmy Allen heads to first base after posting the first hit of the season for Muskegon. Photo/Jason Goorman 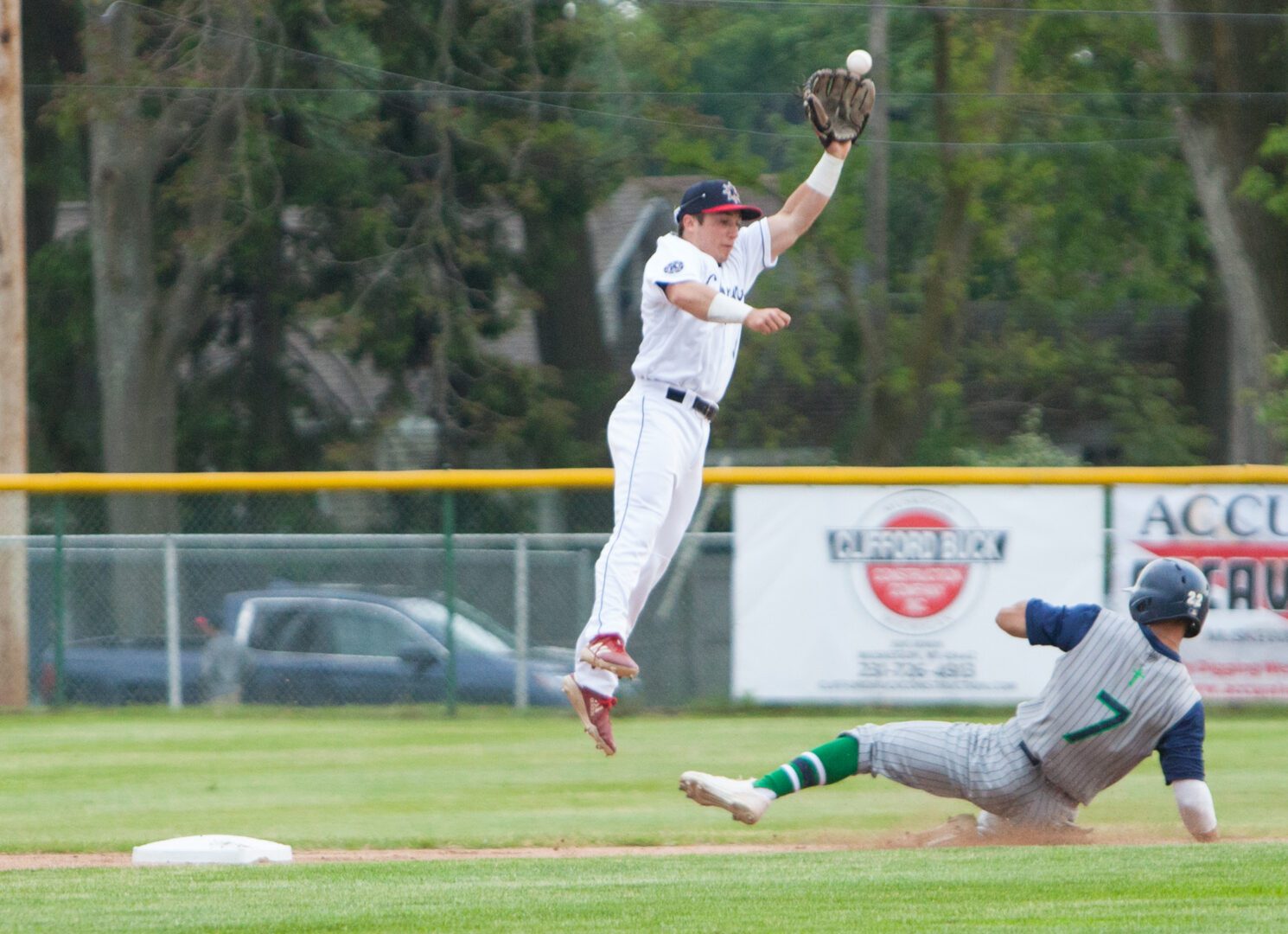 Muskegon second baseman Nolan Bryant has to jump up to catch the throw to second base on a Monarch steal. Photo/Jason Goorman

No. 25 Brian Martin is congratulated at the plate by teammate Jimmy Allen after belting the Clippers first homer of the season. Photo/Jason Goorman 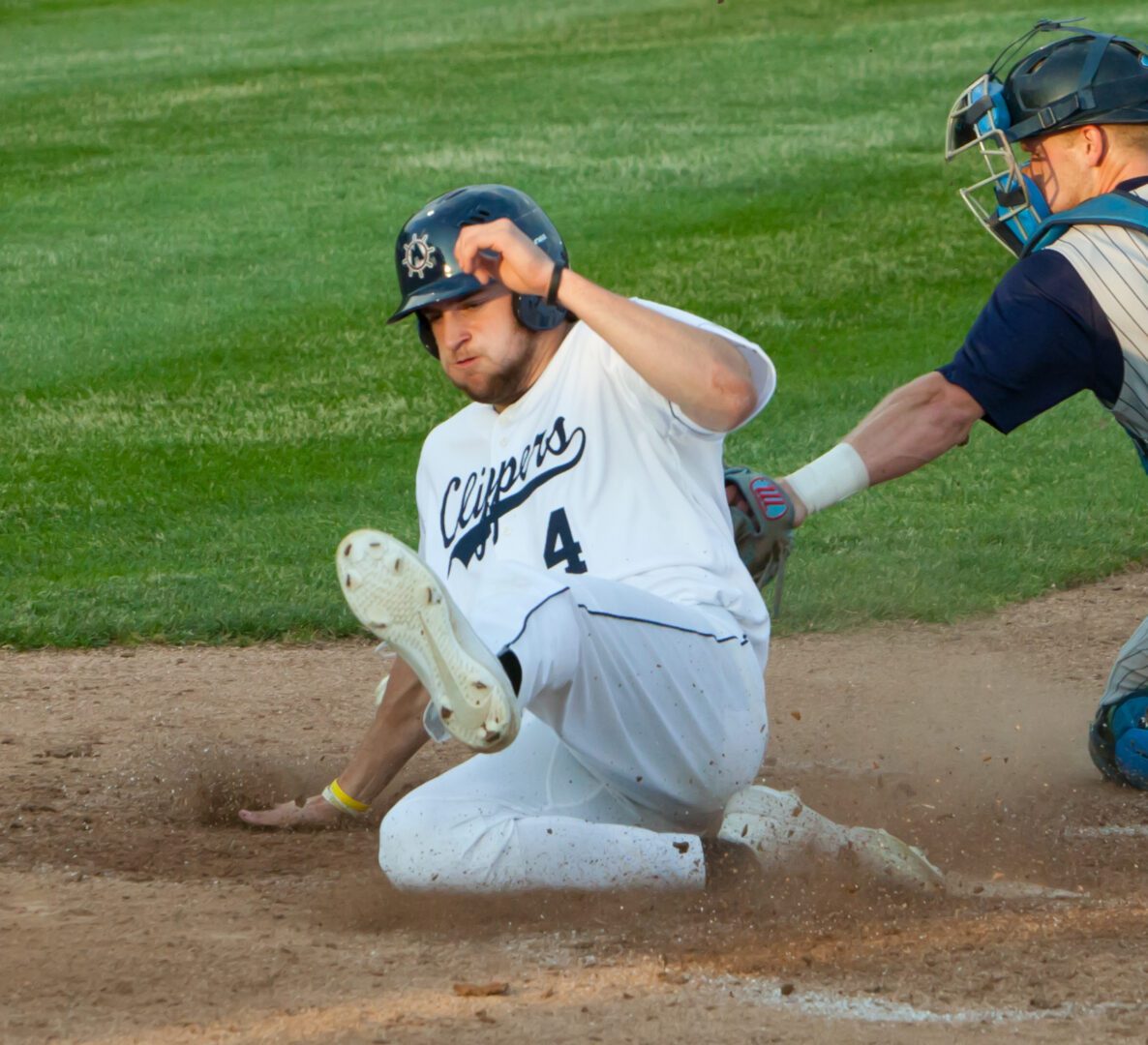 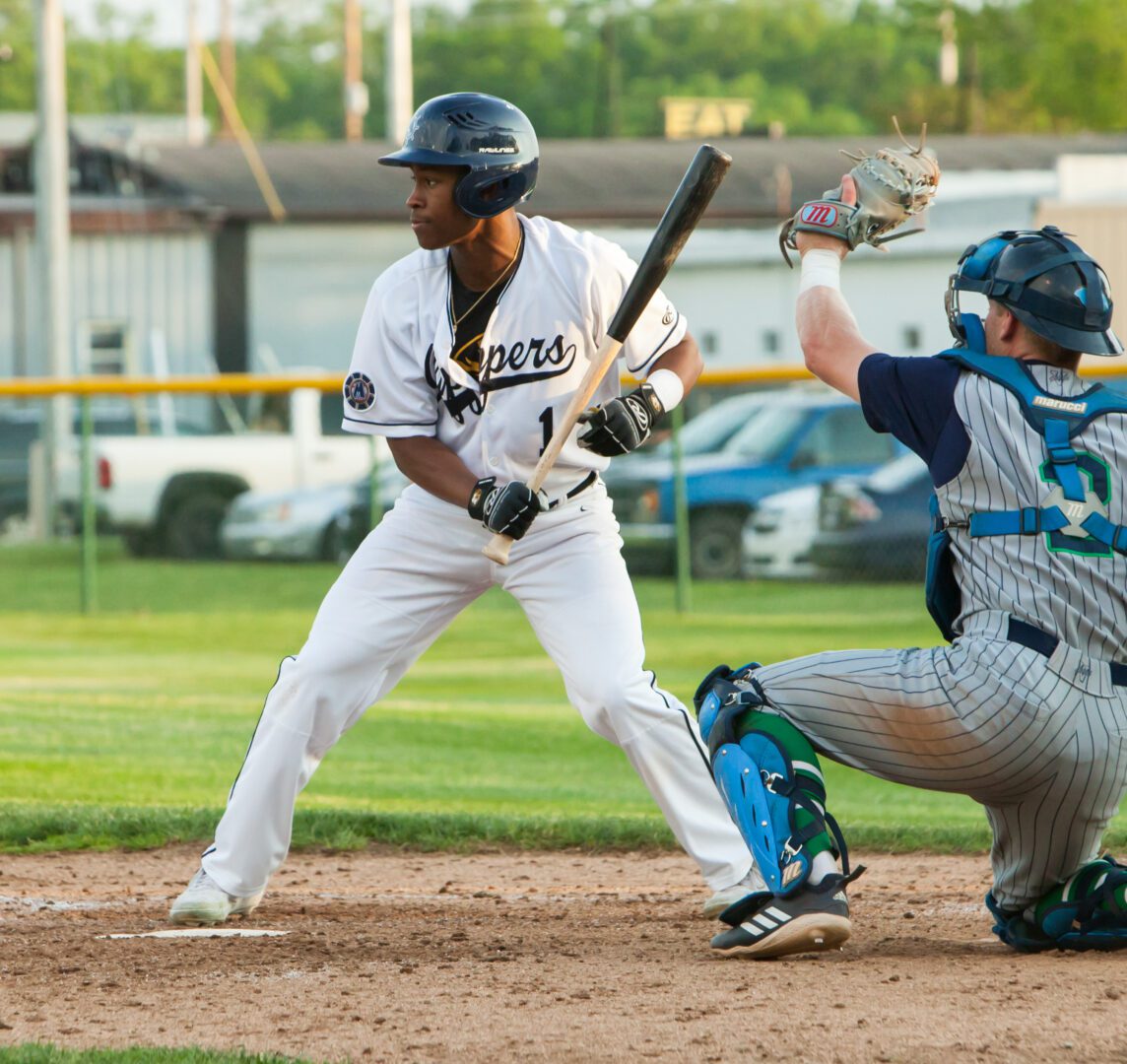 Joshua Holt takes a pitch at the plate for Muskegon. Photo/Jason Goorman 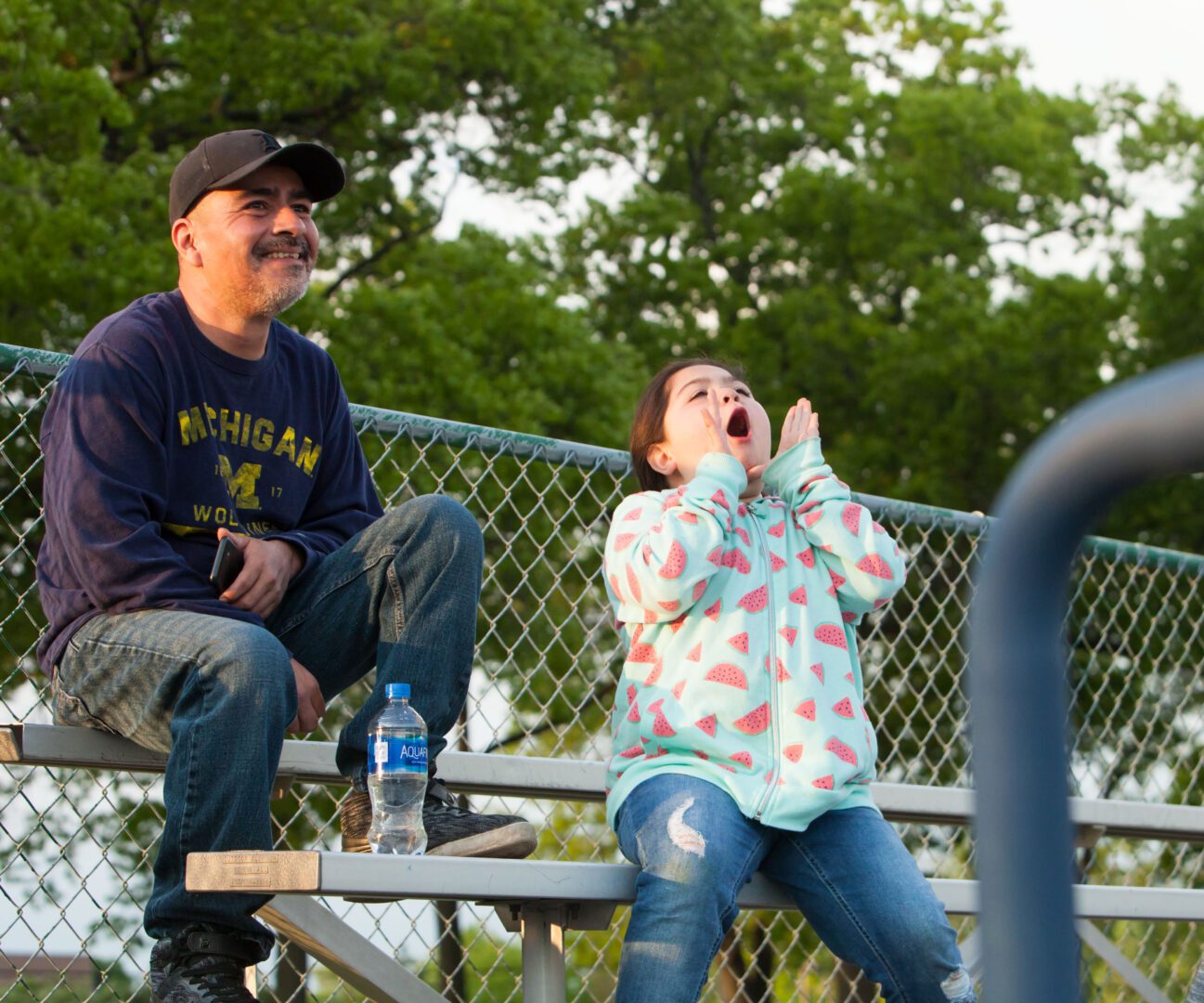 A young fan gets into the game during the Clippers home opener. Photo/Jason Goorman 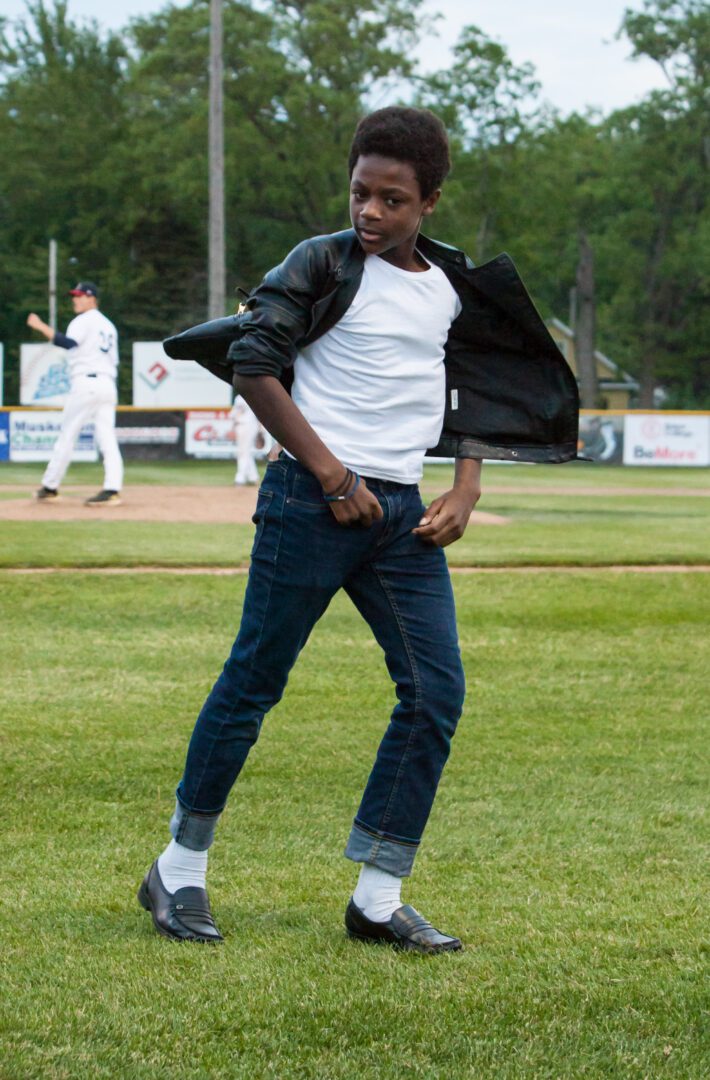 A fan wins a dance off competition during the eighth inning break. Photo/Jason Goorman 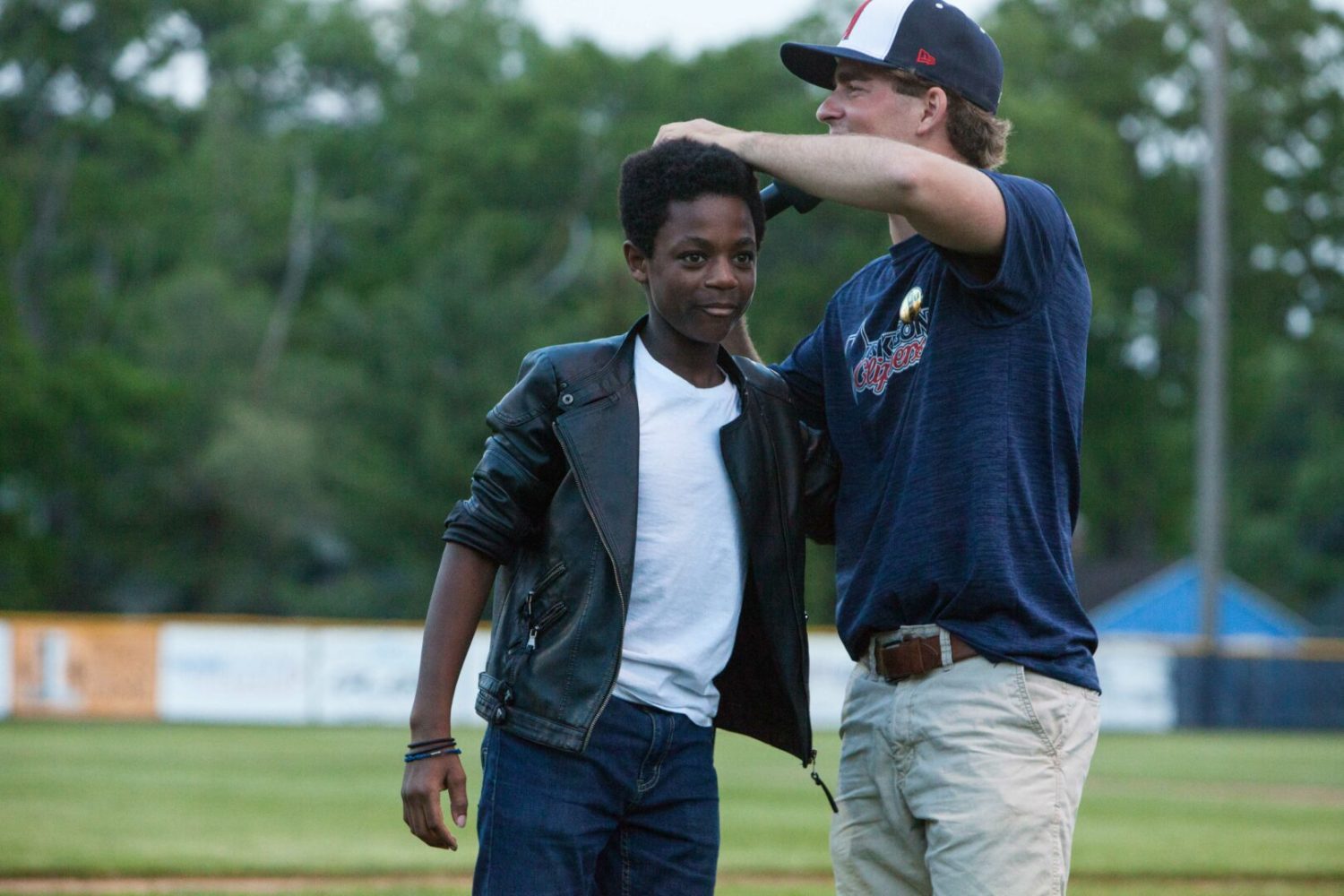 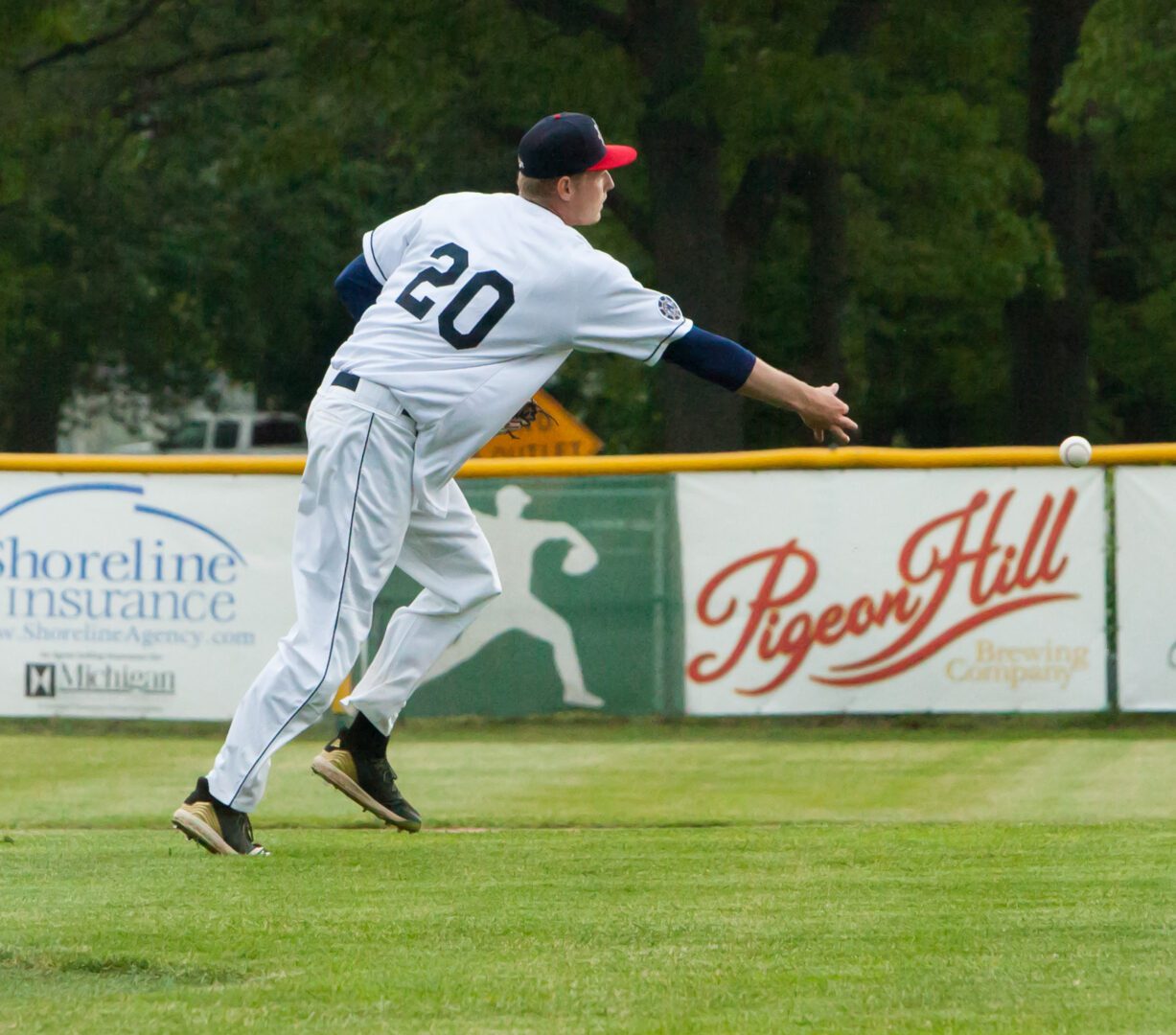 Brady Miller tosses the ball to first base to make the out for Muskegon. Photo/Jason Goorman