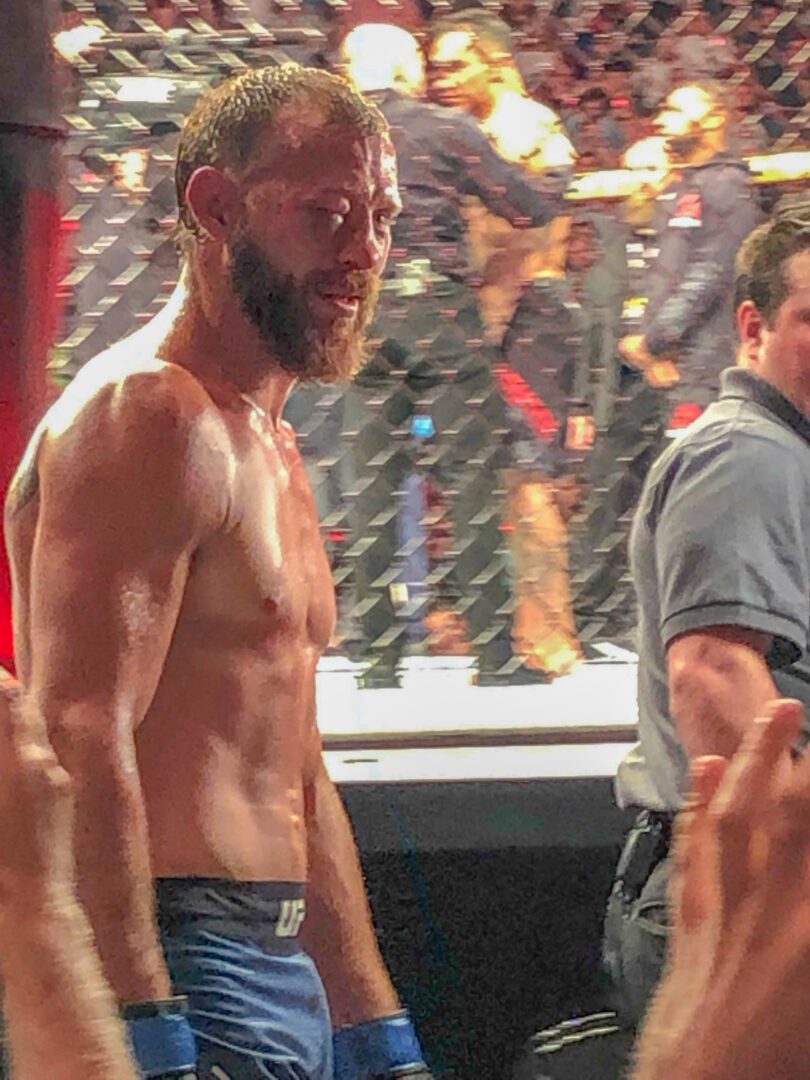 Cerrone walks out of the octagon after falling to Ferguson. Photo/Nich Wolak

A UFC championship belt might be the next piece in the jewelry collection of the Muskegon Catholic Central graduate.

Ferguson, the No. 2-ranked contender in the UFC’s lightweight division (155 pounds) defeated No. 4 Donald Cerrone by technical knockout at the United Center, albeit in controversial fashion.

Both men exchanged punches at the end of the second round, with Ferguson’s last one coming after the bell. Cerrone blew his nose while waiting for the third and final round to begin, causing his right eye to swell shut. Doctors called the fight one round early, giving the victory to Ferguson. They later determined Cerrone suffered an orbital fracture.

“I know that kind of sucked how it went and happened like that,” said Ferguson, who was up on two of the three judge’s scorecards prior to the stoppage, and was tied one round apiece with Cerrone on another. “That’s just not the way to win for myself and for my fans, I apologize for that.

“Going into the third round, I don’t think it was going to be any different. I was going to pick him apart with jabs, I was going to hit him in the body. Literally I just saw his nose go from red to clear, to red to clear from all the shots. It was a good fight. I’m sorry that’s how it went down.”

Ferguson increased his UFC winning streak to 12 with the victory, tops in the division. 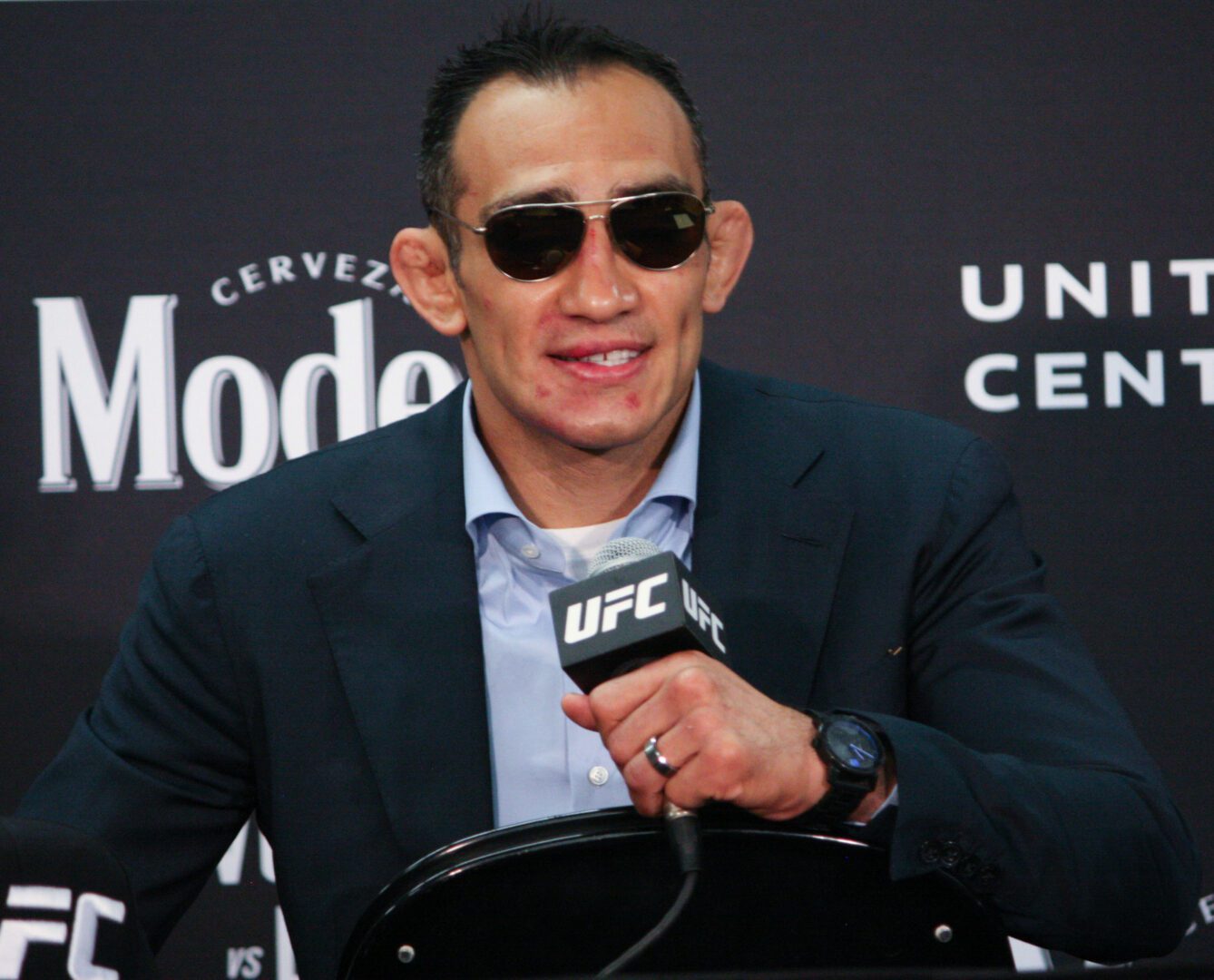 He cited four possible next opponents after the fight: a rematch with Cerrone, a fight with top UFC pay-per-view draw Conor McGregor, or a bout with the winner of the Sept. 7 title fight between Dustin Poirier and current champion Khabib Nurmagomedov, which is scheduled to take place in Abu Dhabi.

“Twelve fights in a row? I should be calling the shots,” Ferguson said, when asked who he should fight next. “If Dustin Poirier don’t do it, I’m going to do it. I want to keep representing myself, my team, my family. I’m going to keep winning. What sounds better than 12? 13. But it would sound a hell of a lot better with a title shot and adding that 13th victory.”

The Ferguson-Cerrone contest had title implications in the eyes of many, but UFC President Dana White said it was still undetermined whether Ferguson would get a crack at the belt.

“When we get back to Vegas, we’ll get together on Tuesday and figure these things out,” White said. “It doesn’t really matter yet because these guys still have to fight in September, we’ve got Poirier and Khabib. You know I don’t make fights the night of the fight.”

Ferguson and Cerrone fought a fairly even first round Saturday, with both men landing regularly in exchanges. Two of the three judges scored Round 1 10-9 for Ferguson, with one going 10-9 Cerrone. 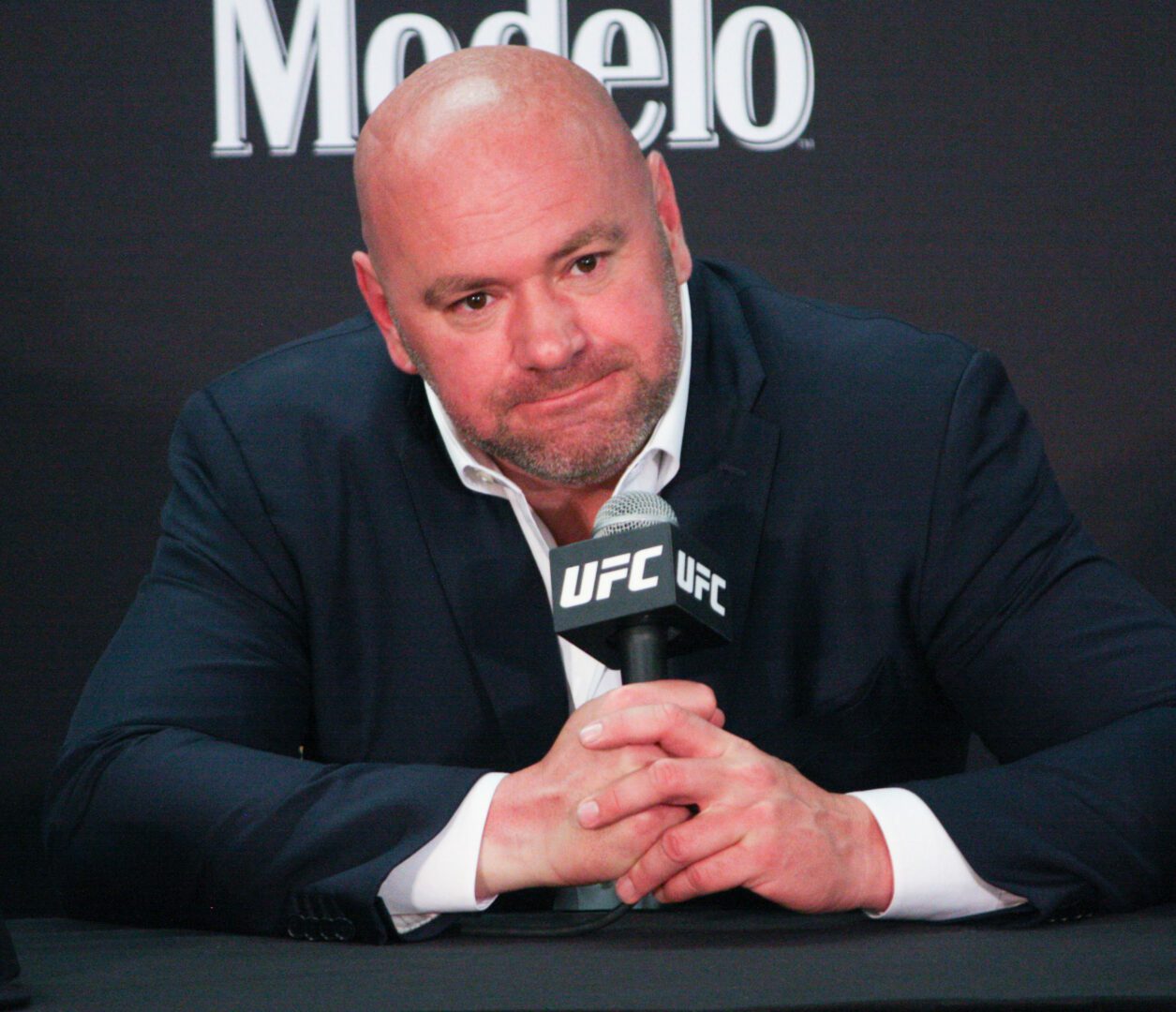 UFC President Dana White talks to media after Ferguson’s fight, says it’s still undetermined whether the Crusader grad will get a crack at the championship belt. Photo/Nich Wolak

Ferguson took control in the second round. He targeted Cerrone’s body with kicks, a common strategy to try to limit an opponent’s mobility in MMA. All three judges favored Ferguson in the round, giving him 10-9 scores across the board.

The contest was deemed Fight of the Night by the UFC, earning both competitors a $50,000 bonus.

Fans booed the doctor stoppage, which White took issue with.

“Anyone in this arena tonight that though Cowboy should have continued to fight should be beat with a stick,” White said. “That’s just horrible to think that guy should go back in there and fight like that. He would, of course he would, but he shouldn’t and he didn’t. That’s why there’s an athletic commission.

Ferguson has gone 15-1 since joining the UFC, with his only loss coming via decision to Michael Johnson on May 5, 2012.

Ferguson made several nods to his Michigan ties in the post-fight press conference. He shouted out the 231 area code and said running to Lake Michigan earlier in the week reminded him of Muskegon. He referenced his high school football career as a cornerback with the Crusaders and wrestling career at Grand Valley State University.

Chye scores 21 as Mason County Central gets by Orchard View