HOLLAND – The Spring Lake girls soccer team has performed at a high level for the last three seasons, but it can’t seem to

get past Forest Hills Northern.

The Lakers fell 3-2 to FH Northern on Friday in the Division 2 regional final at Holland. The loss marks the third consecutive year that Spring Lake has lost by one goal to the Huskies in the regional finals.

“They obviously have a tradition of winning,” said Spring Lake head coach Becky May about Forest Hills Northern, which has only one senior player. “I think sometimes that gives them more confidence coming in. Sometimes with high school kids that’s the difference maker.”

Forest Hills Northern started the scoring with 17:18 left in the first half when sophomore Emily VanderHoff found the back of the net off an assist from Elyse DeSchryver. 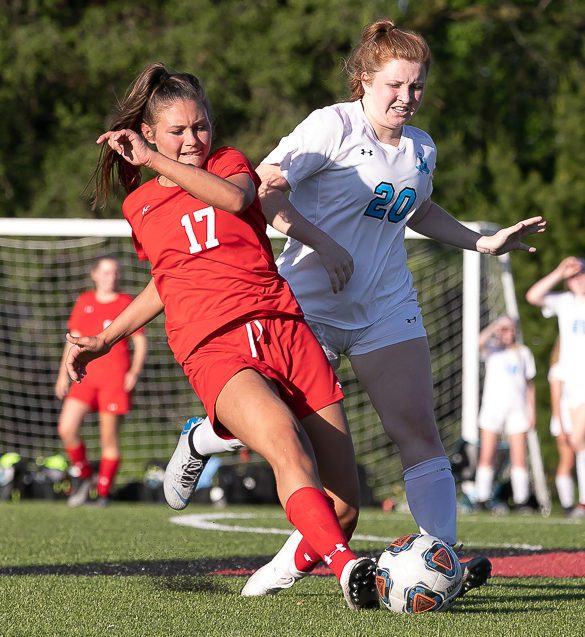 Just 10 minutes later, the Huskies extended their lead to 2-0 when junior Anna Biebel ripped a shot to the back of the net.

Spring Lake didn’t surrender however, responding with a goal of its own with 2:10 left in the first half. Freshman Meah Bajt riffled a shot off an assist from senior Laney Peasley to put the Lakers on the board.

After halftime, Forest Hills Northern extended the lead to 3-1 with 21:25 remaining. The goal was scored by VanderHoff, who was assisted by Biebel.

The game remained 3-1 until Laker junior Phoebe Saunders scored off a loose ball with three seconds remaining in the game.

The Lakers were outshot in the game 10-4.

“The reason they didn’t give up is they’re players,” said May about her team. “Players will play, and they’ll give it their all every second they can. They knew they weren’t going to win when they got that last goal, but they still gave it their all in every moment.”

The Lakers finished the season with a record of 18-2-2 while Forest Hillls Northern improved to 18-2-1 and advanced to the state semifinals..

“To only lose twice is impressive,” May said, “The seniors really were leaders all year for us. They’re good examples for players coming up.” 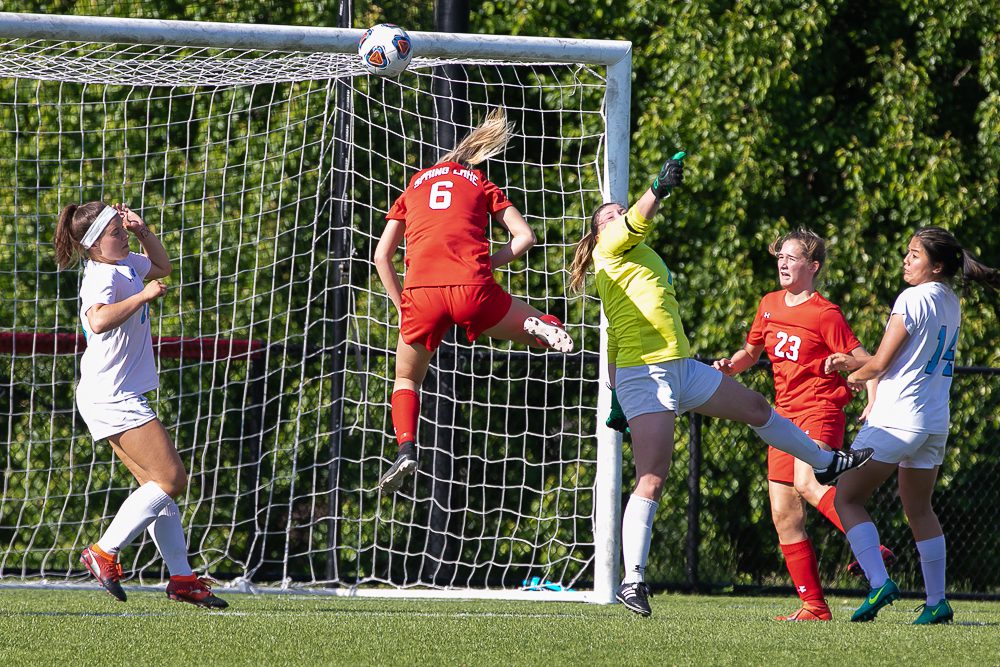 Spring Lake’s Laney Peasley puts a header just over the cross bar in the first half. Photo/Randy Riksen 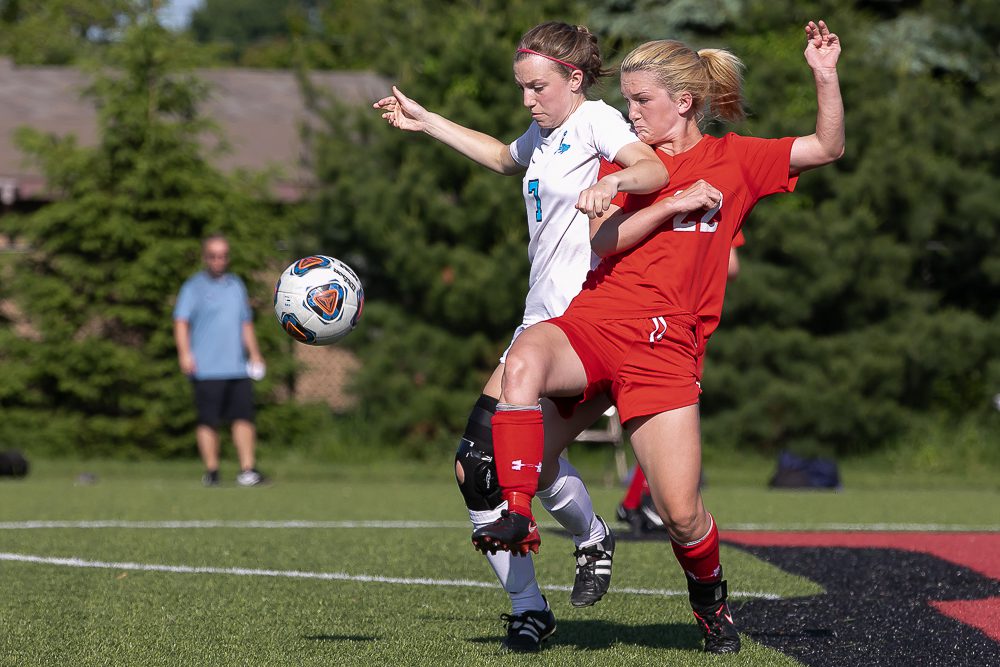 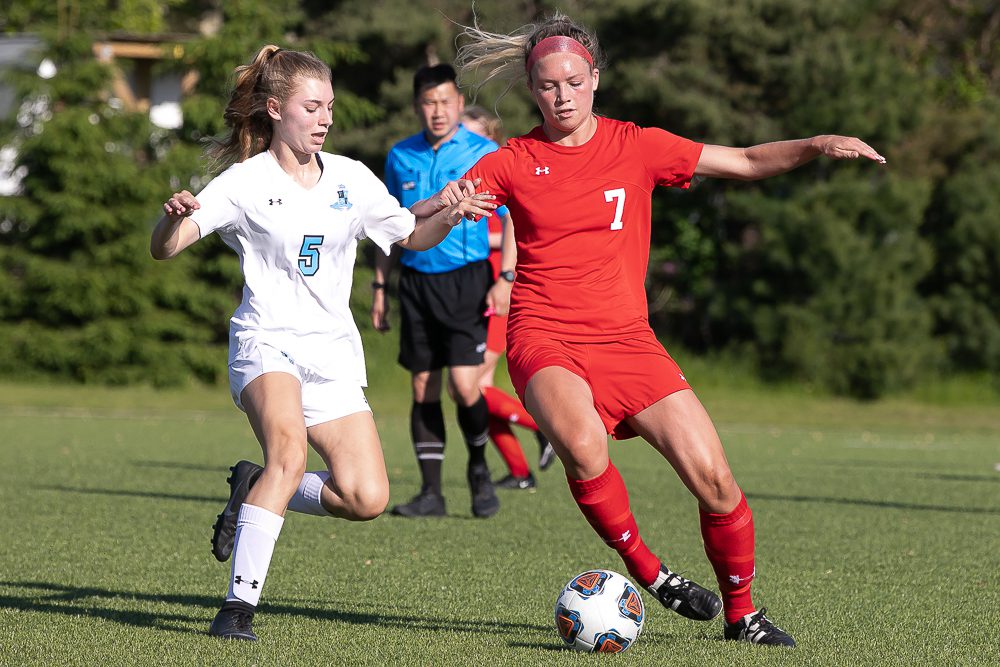 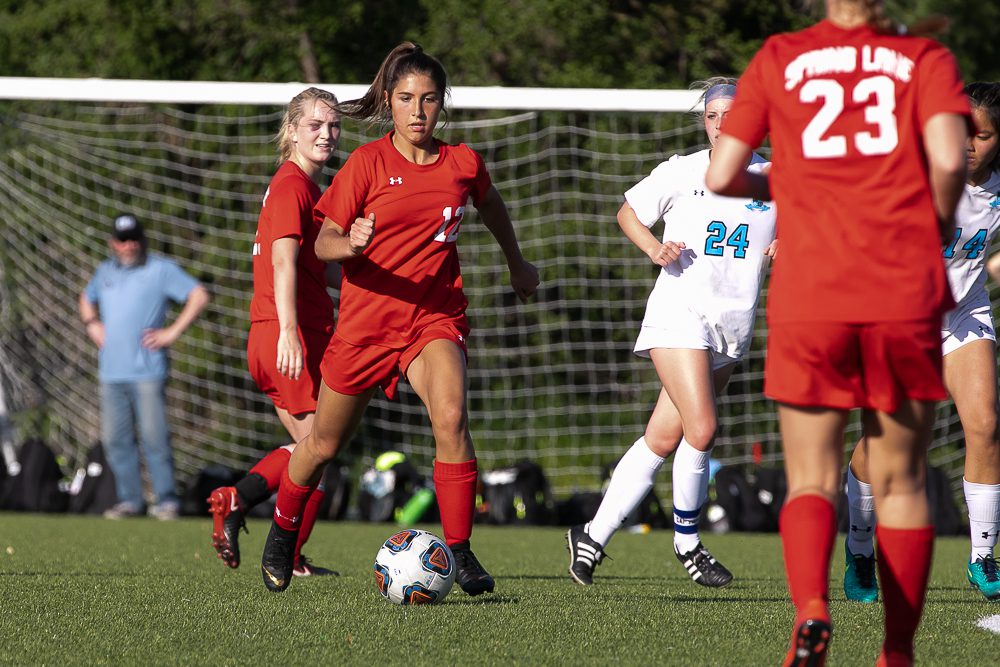 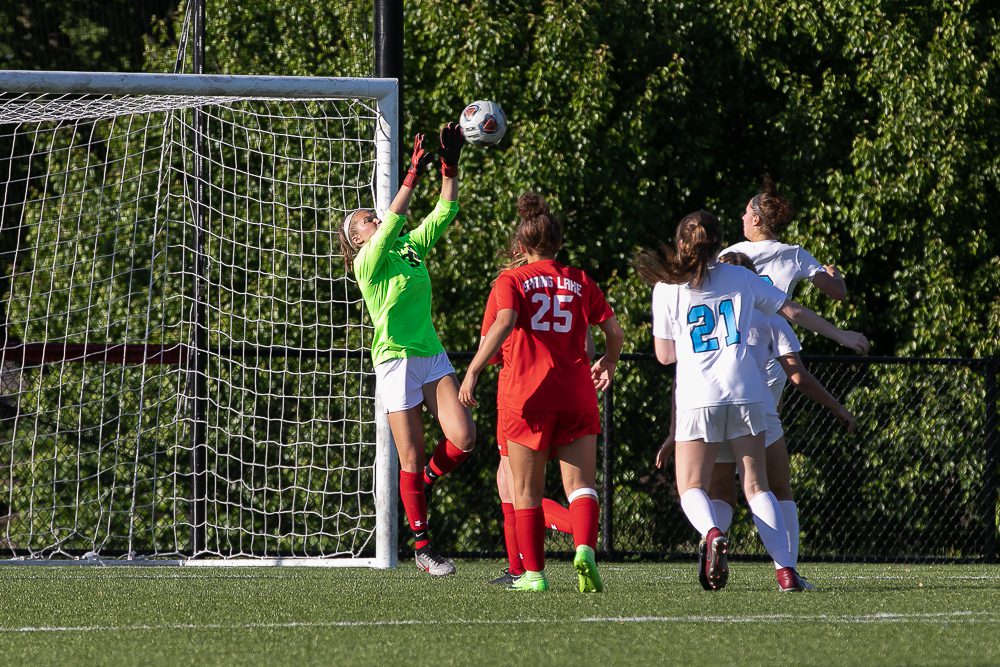 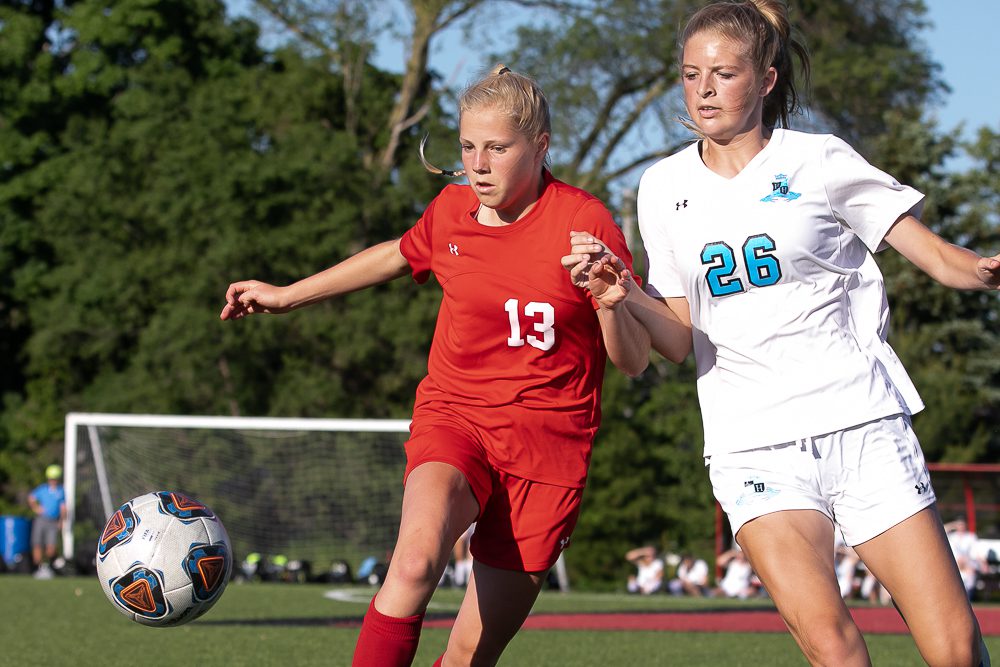 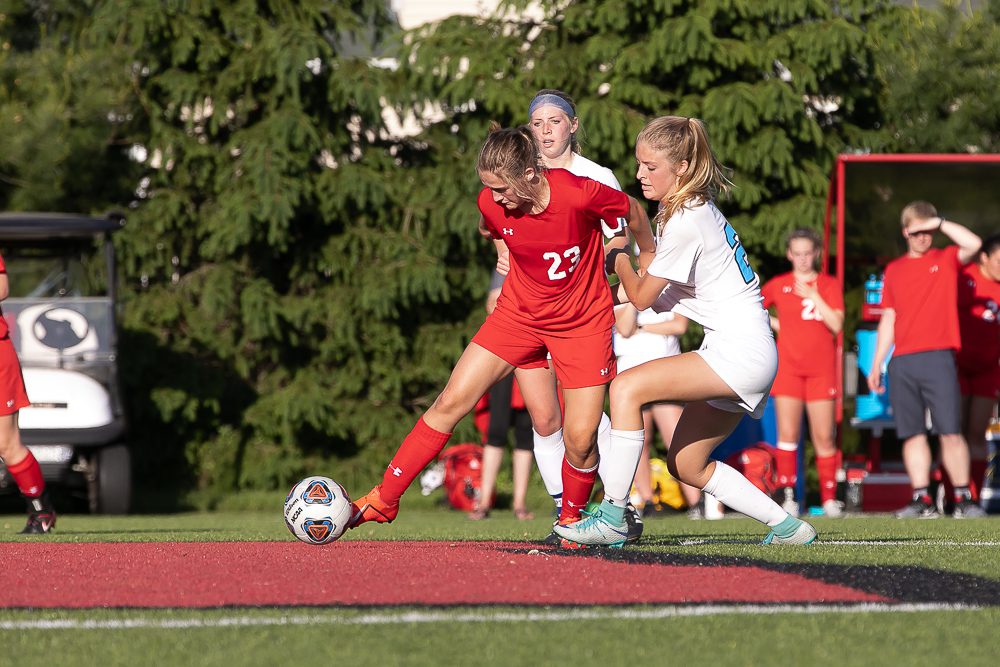 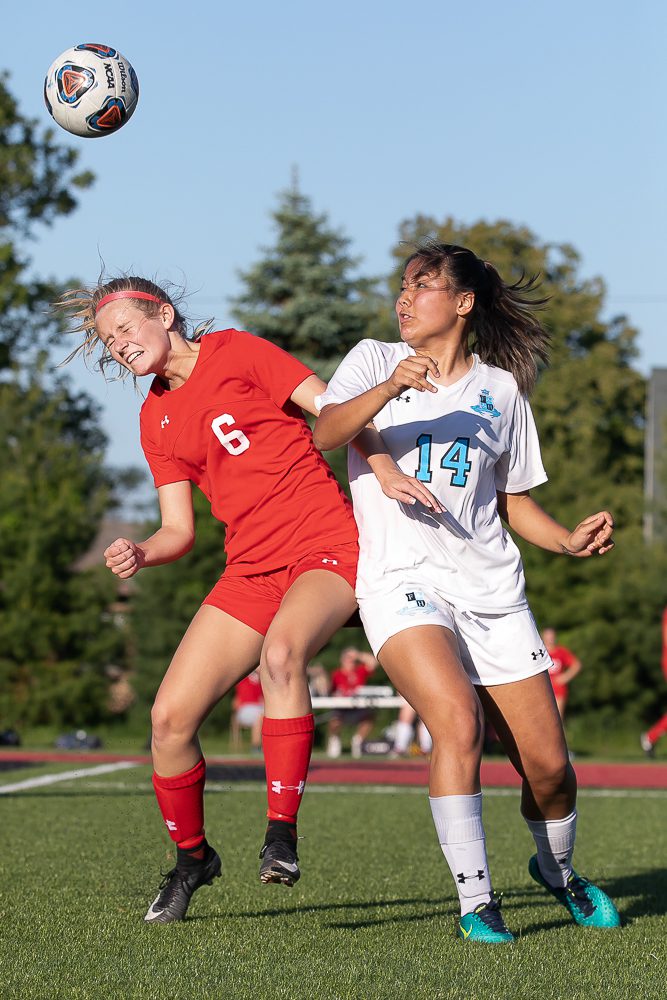 Laney Peasley gets her head on the ball while holding off Forest Hills Northern’s Chess MacAnaspie. Photo/Randy Riksen