MUSKEGON – When you’re in a battle for the final playoff spot with three games left in the season, it’s not a

good idea to leave a lot of runners on base. 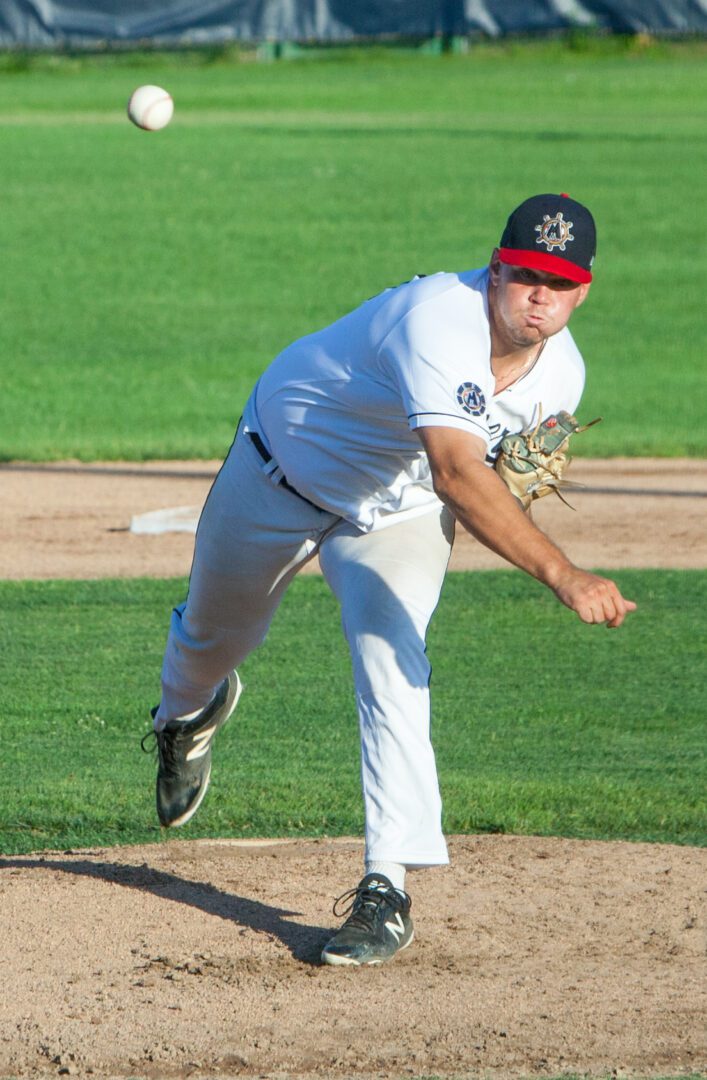 And it helps to get that third out when the opponent has runners in scoring position.

The Muskegon Clippers came up short on both fronts on Sunday night, and lost 11-9 to the Lima Locos in a very important game at Marsh Field.

The Clippers came into the contest tied for second place with the Michigan Monarchs in the Great Lakes Summer Collegiate Baseball League’s Northern Division. The top two teams in each of the two divisions make the postseason playoffs.

Luckily for Muskegon, the Monarchs also lost on Sunday night, 5-4 to St. Clair in a 12-inning marathon, so the two teams remain tied in the standings.

Now it comes down to the last two games of the regular season, and a battle down to the wire. The Clippers, now 20-19, will host Lima in the second and third games of the series on Monday and Tuesday night, respectively.

Lima is the first-place team in the Northern Division, and has already clinched the title and a playoff berth. The team that finishes in second place will play Lima in a three-game playoff series, beginning on Thursday.

“We were the beneficiaries of a lot of bases on balls and didn’t pick up a big hit,” said Clippers Manager Walt Gawkowski, whose team is trying to make the playoffs for the first time in its three years in the Great Lakes league. “That’s a very good team over there, but we had opportunities to break the game open and just couldn’t do it.

“But you know what, we’re still in the hunt. We will come back tomorrow and try to win a ballgame then. The kids are positive and we put this one behind us right now.”

The Clippers had every chance to take control of the game on Sunday, due to the wildness of Lima starting pitcher Zach Brown. He walked nine batters in his four innings on the mound, but Muskegon only managed two runs in that time. 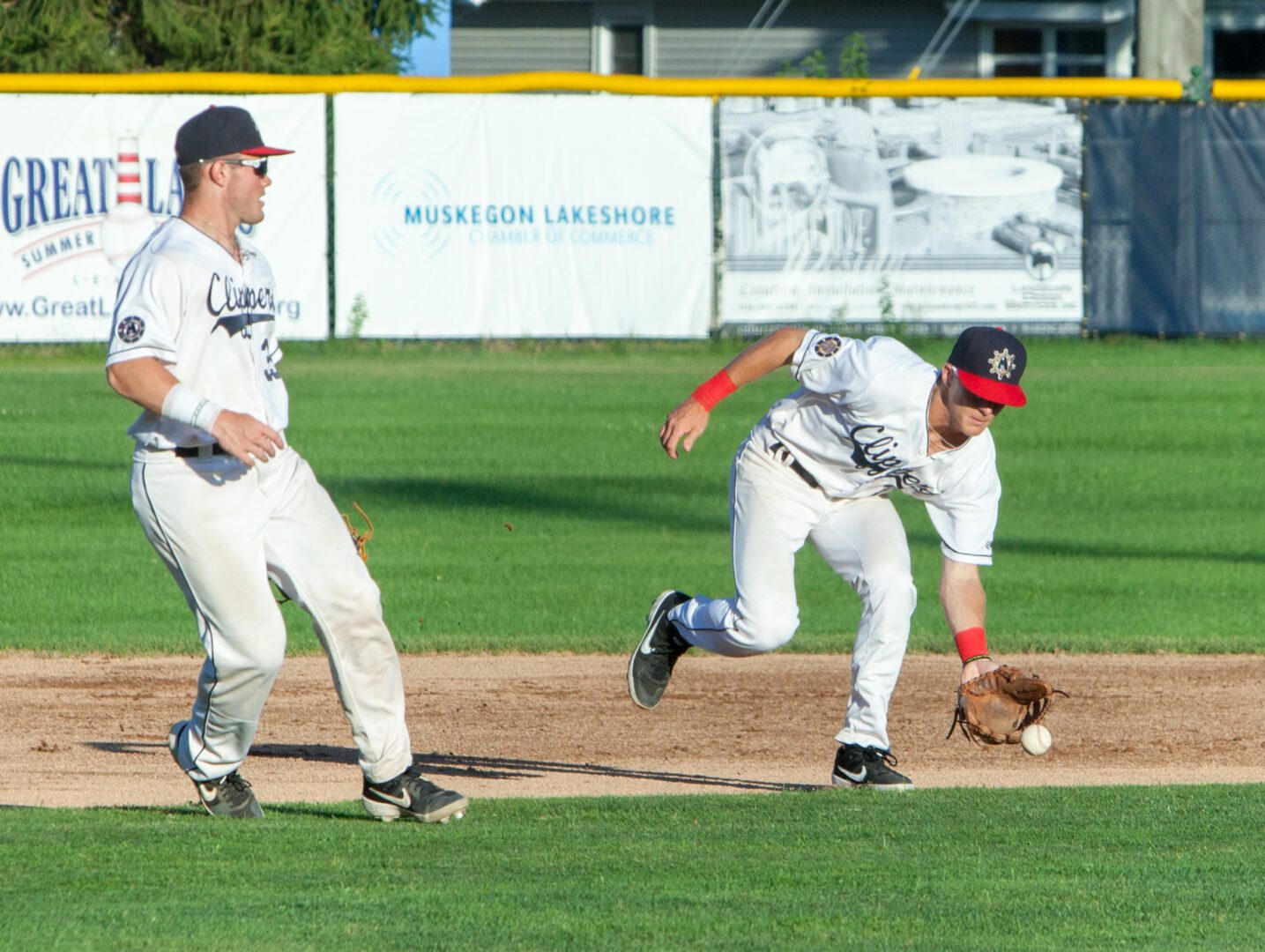 The Clippers left the bases loaded in both the second and fourth innings.

Muskegon was also hurt by a series of crushing two-out hits by Lima.

In the second inning, Lima shortstop Jackson Miller smacked a two-out, three-run homer to right-center field to give the visitors a 4-0 lead.

Muskegon rallied for three runs in the bottom of the sixth to make the score 6-5. But in the seventh the Clippers gave up back-to-back two-out RBI doubles to Miller and Tolme, and suddenly the score was 11-5. The big blow came from Tolme, whose bases-loaded double to the wall in center field scored all three base runners.

The Clippers did some two-out damage of their own in the bottom of the eighth when Austin Eifrid hit a two-run double and Jimmy Allen followed with a two-run single, making the score 11-9.

But Muskegon could get no closer.

“We were in good shape, but that seventh inning was a dagger,” Gawkowski said. “We battled back, but then instead of getting a shutout inning, they put up a five spot.

“We just gotta win a game. We’re not too worried about what the Monarchs do. We have to take care of our own business. We will be back tomorrow, and the kids will play hard.”

Melle took the loss, surrendering 12 hits and three walks while striking out four in six innings.

Miller finished with four hits and five RBIs for Lima while Tolme had two hits and four RBIs.

Eifrid had two hits and three RBIs for Muskegon. Allen had one hit and knocked in three, while Ty Olejnik and Noah Hecht contributed one hit and two RBIs apiece. 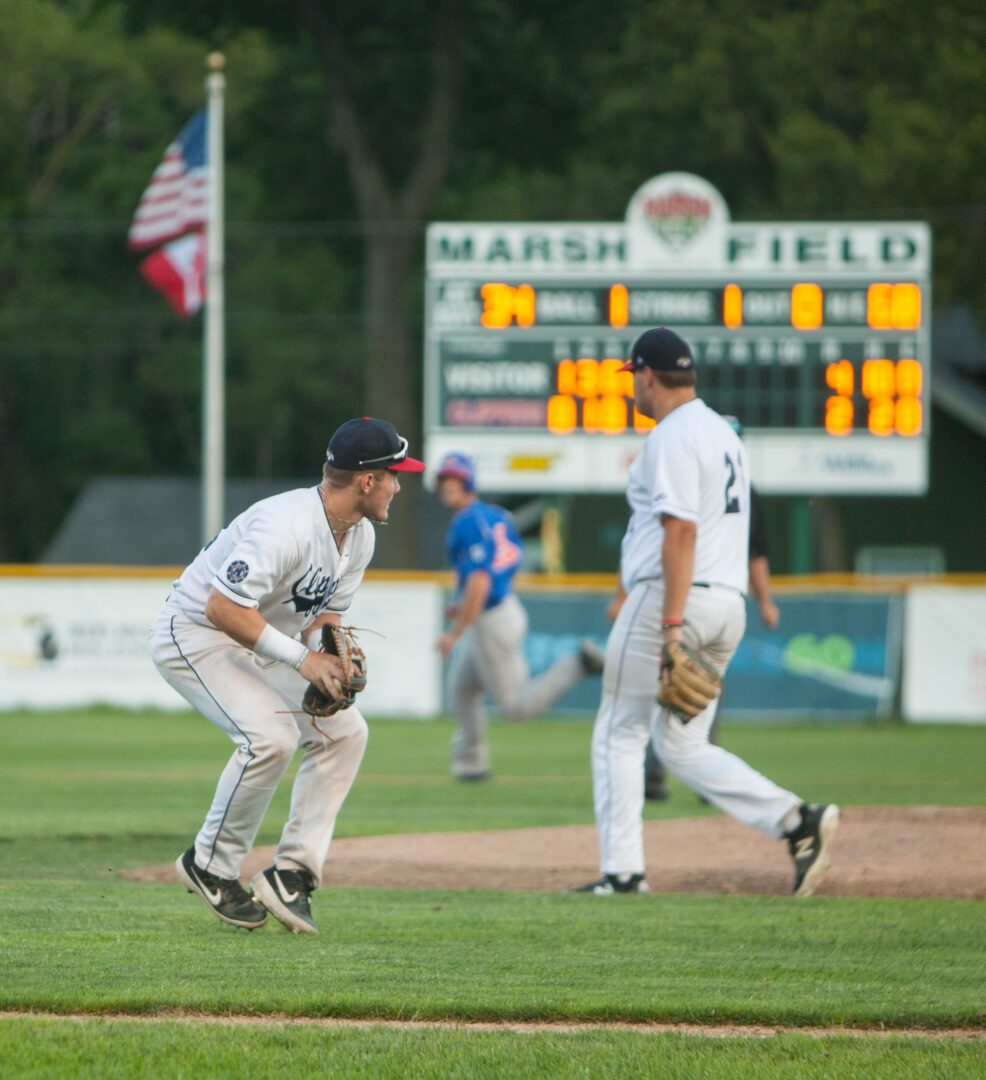 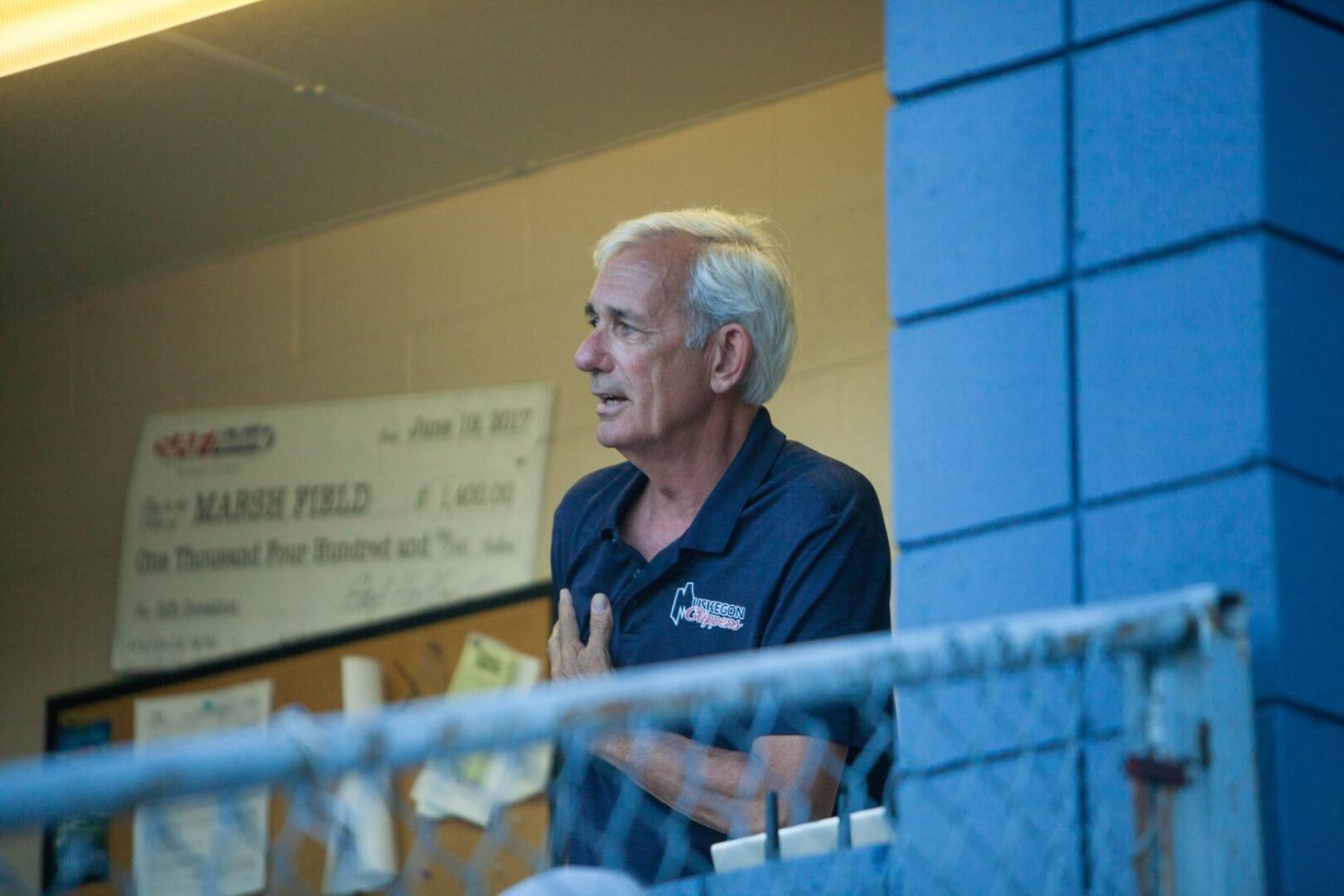 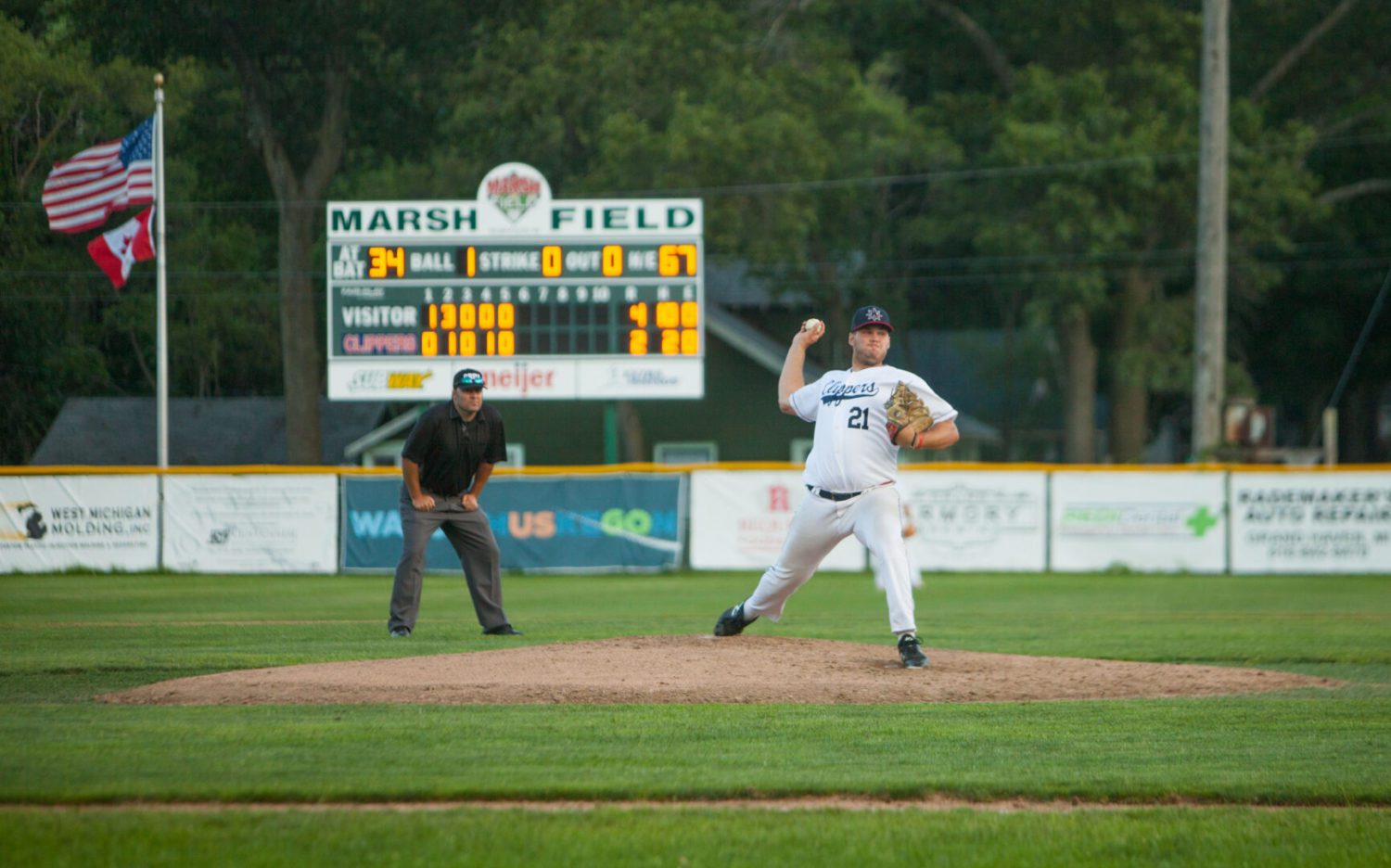 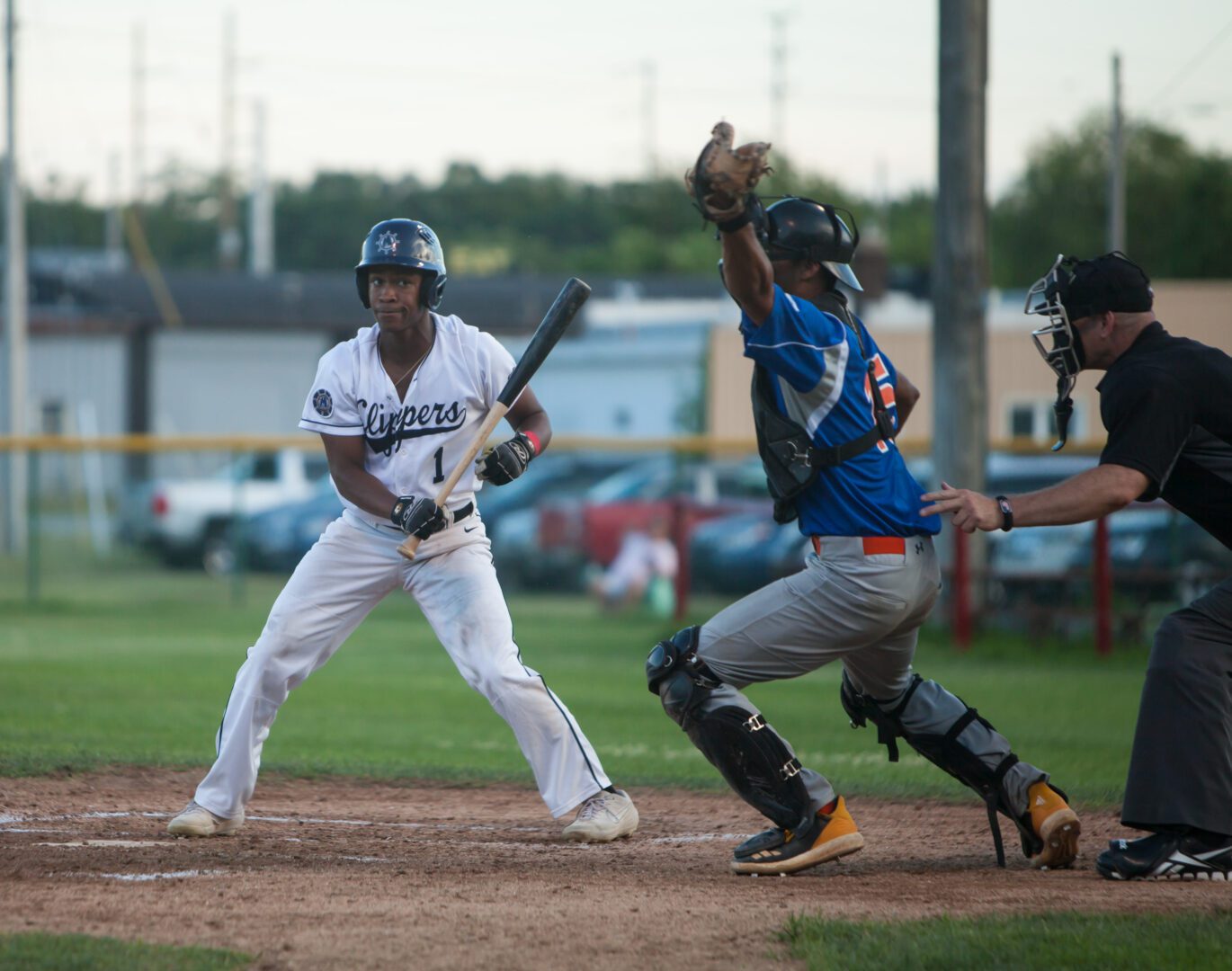 NO. 1 Joshua Holt eyes a high pitch at bat for the Clippers. Photo/Jason Goorman 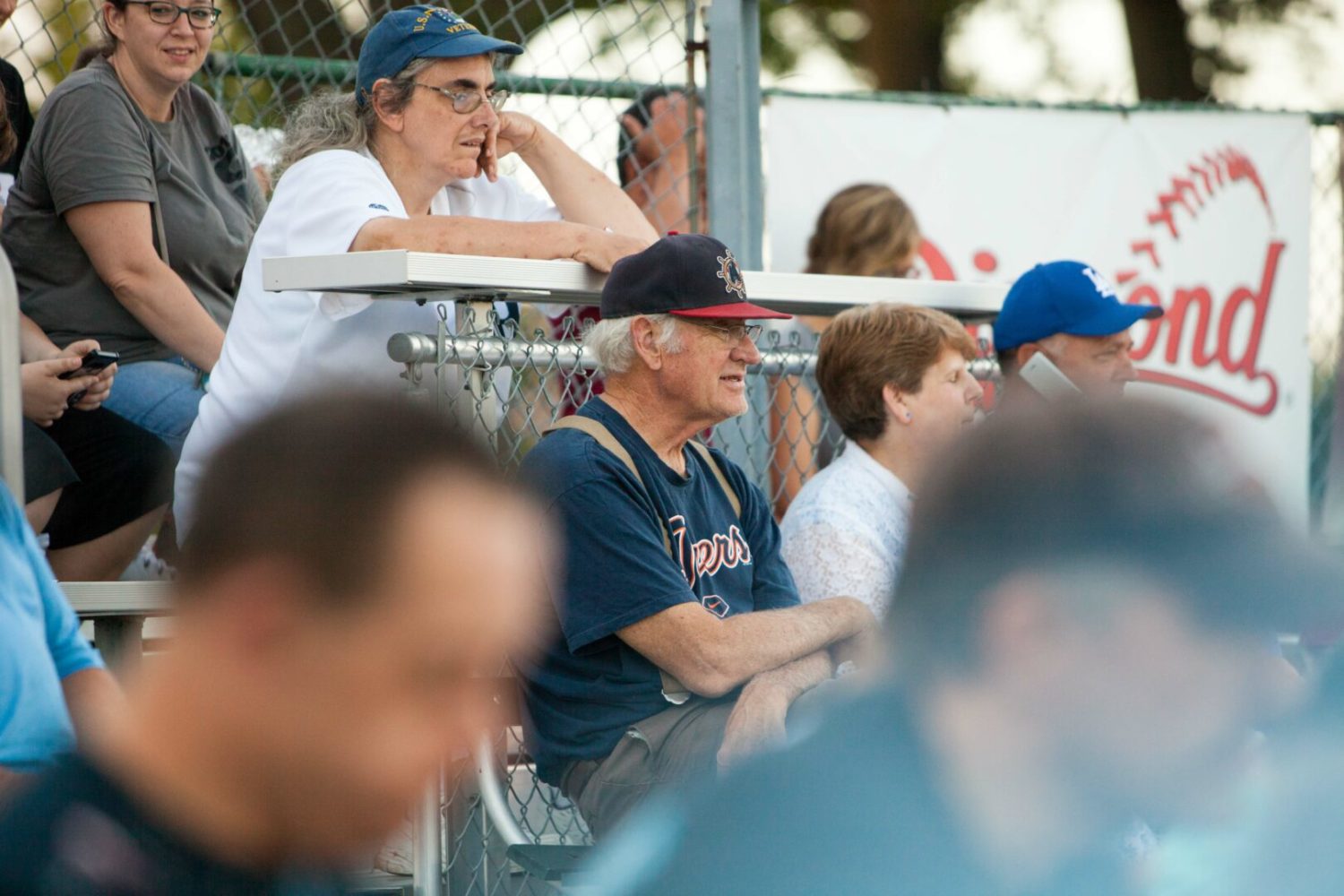 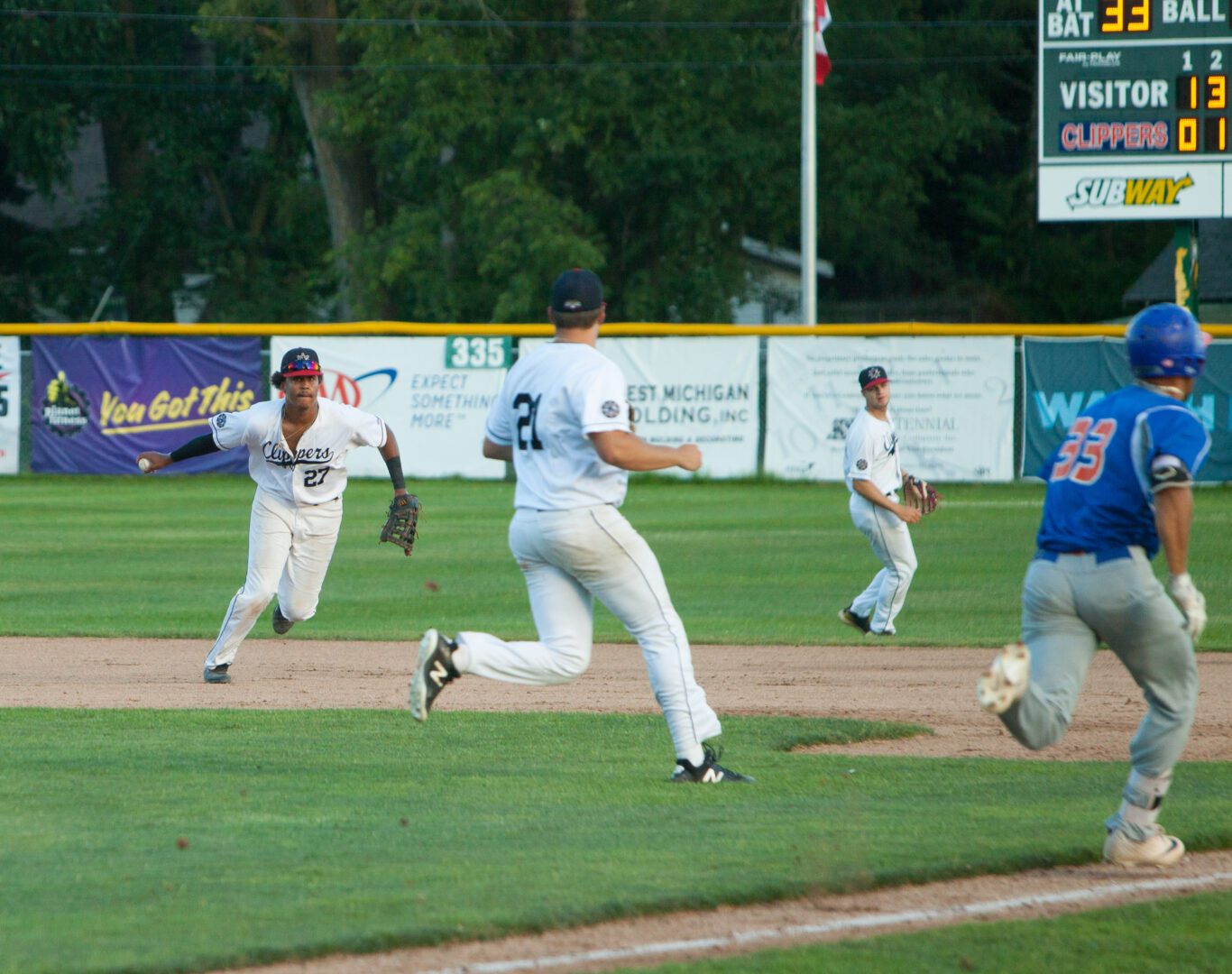 No. 27 Micah Allen gets ready to make an under handed throw after making the play at first base for Muskegon. Photo/Jason Goorman 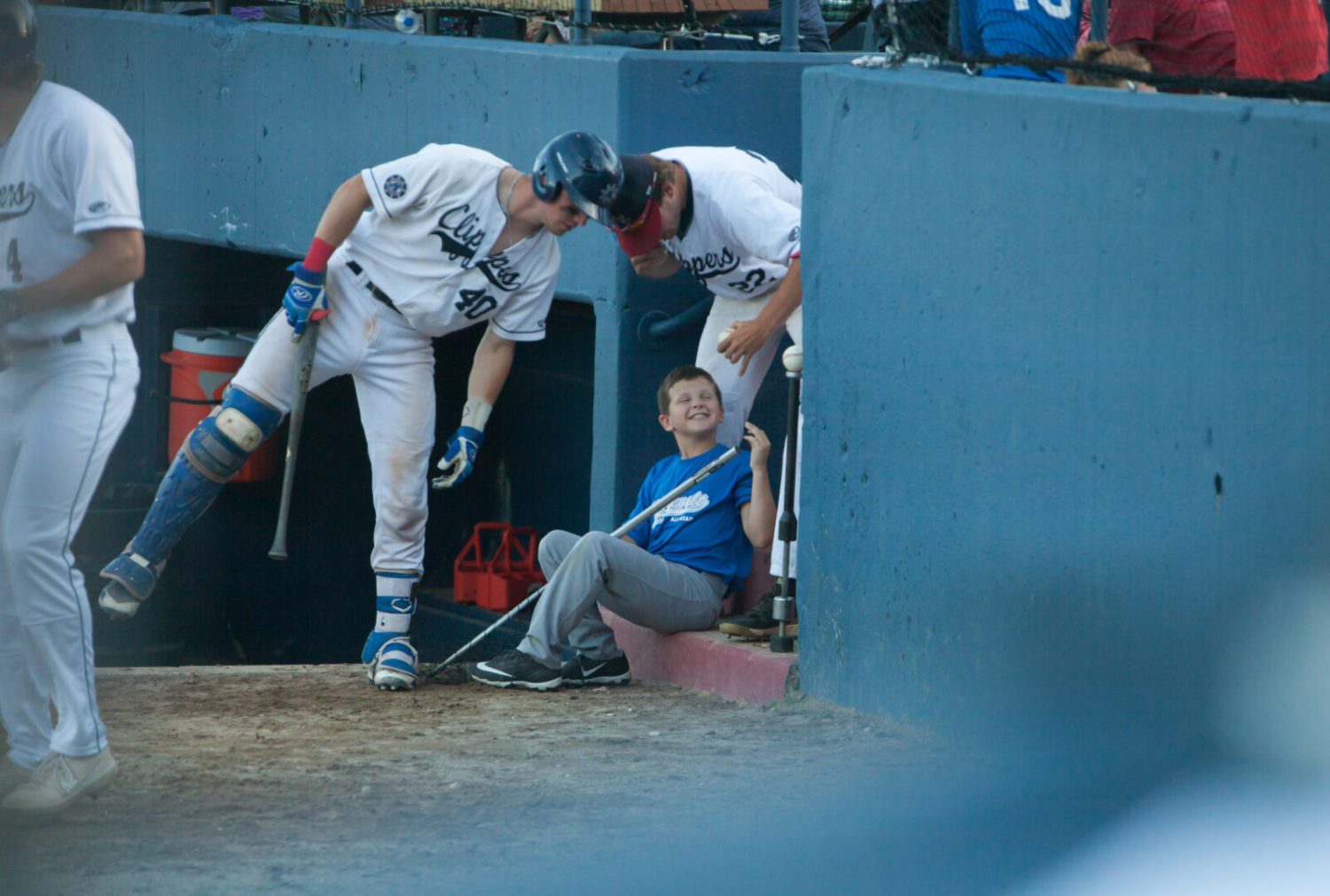 Muskegon catcher Cooper Peterson and No. 22 Charles Heil joke with a young fan and between inning contestant. Photo/Jason Goorman 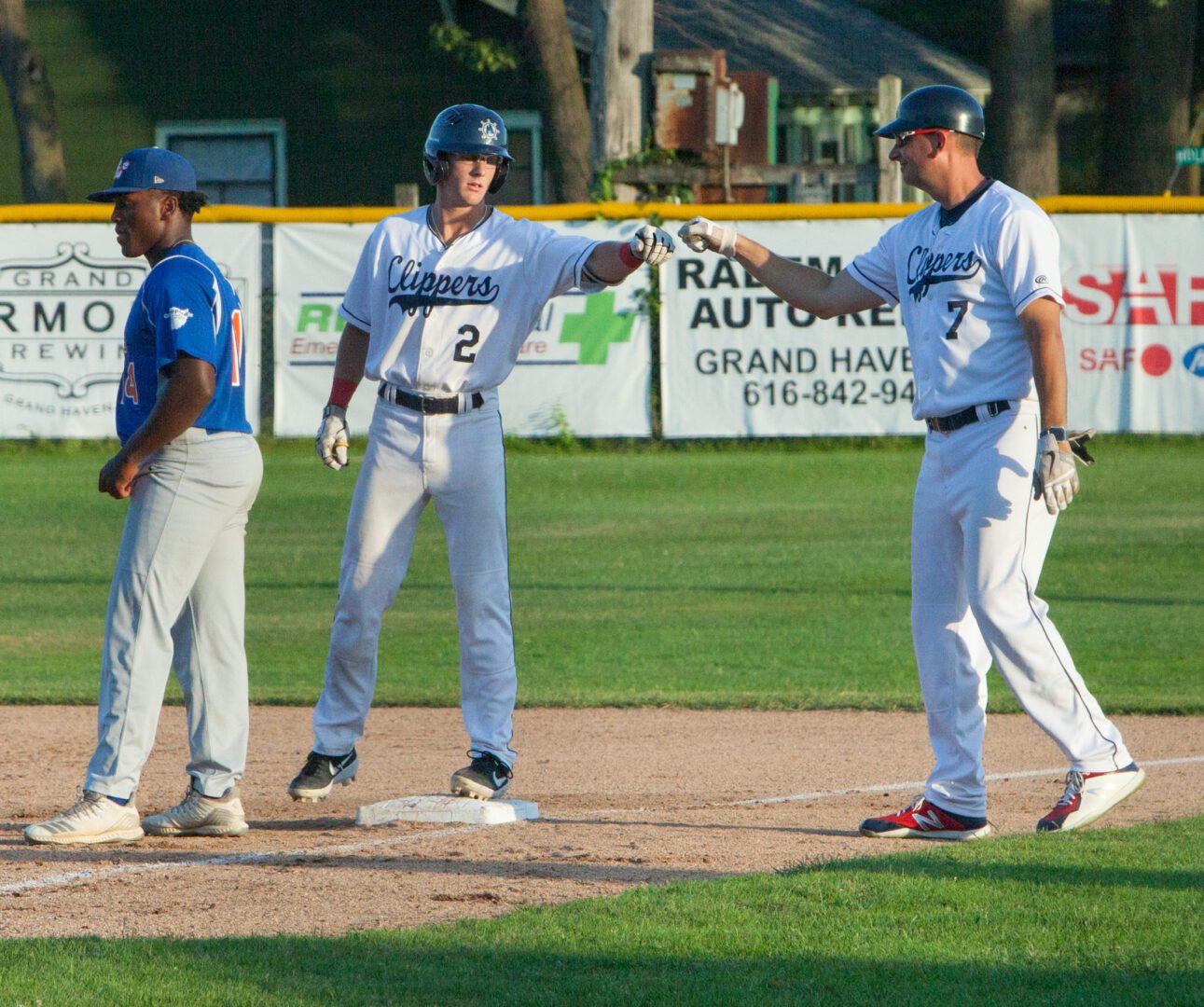 Austin Eifrid gets congratulated after posting an RBI single for the Clippers. Photo/Jason Goorman 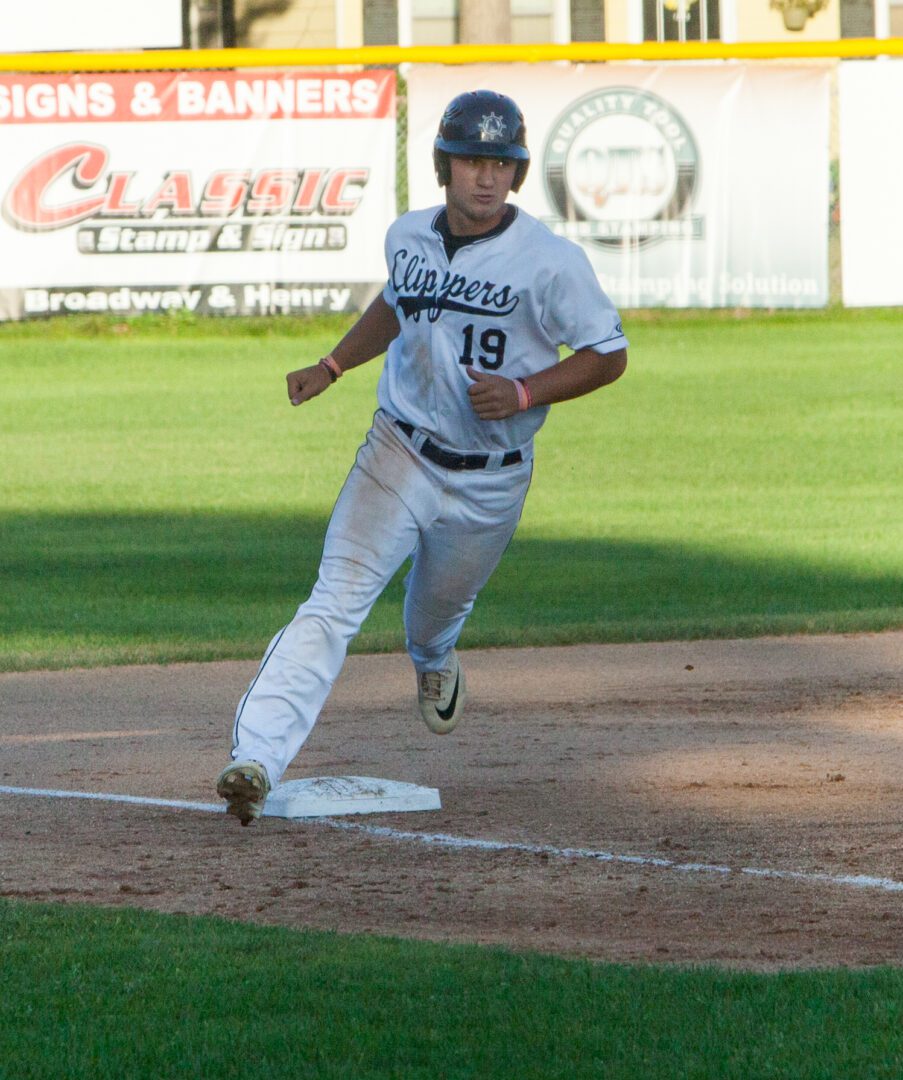 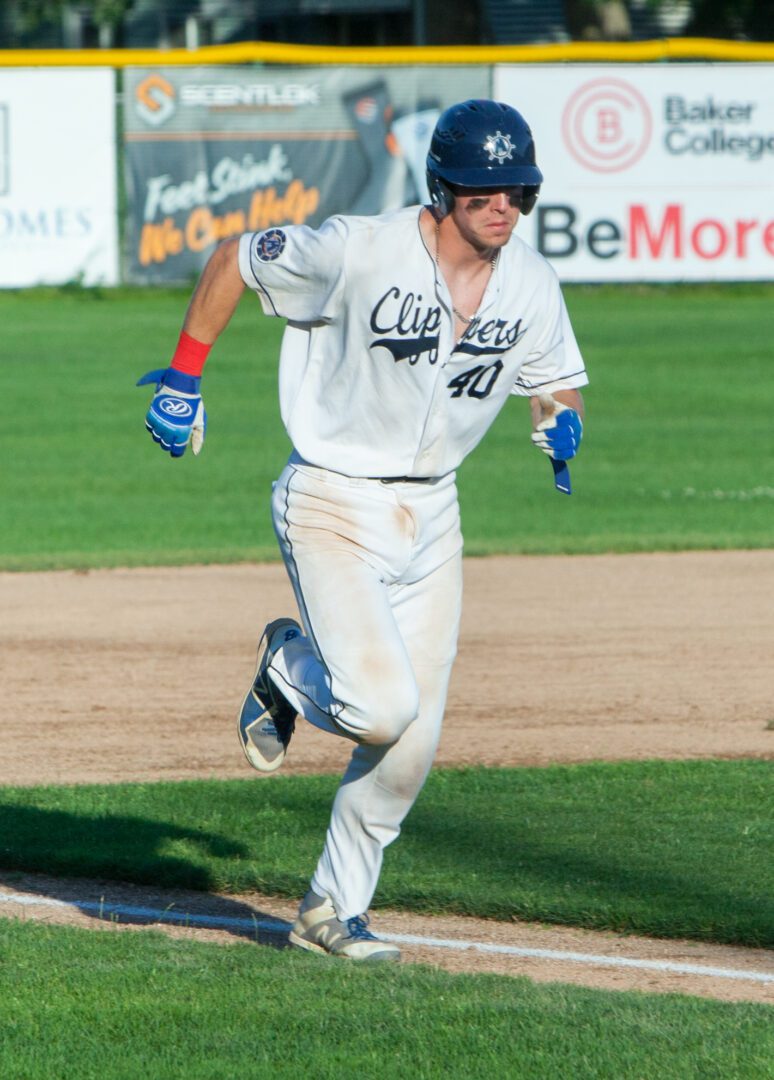 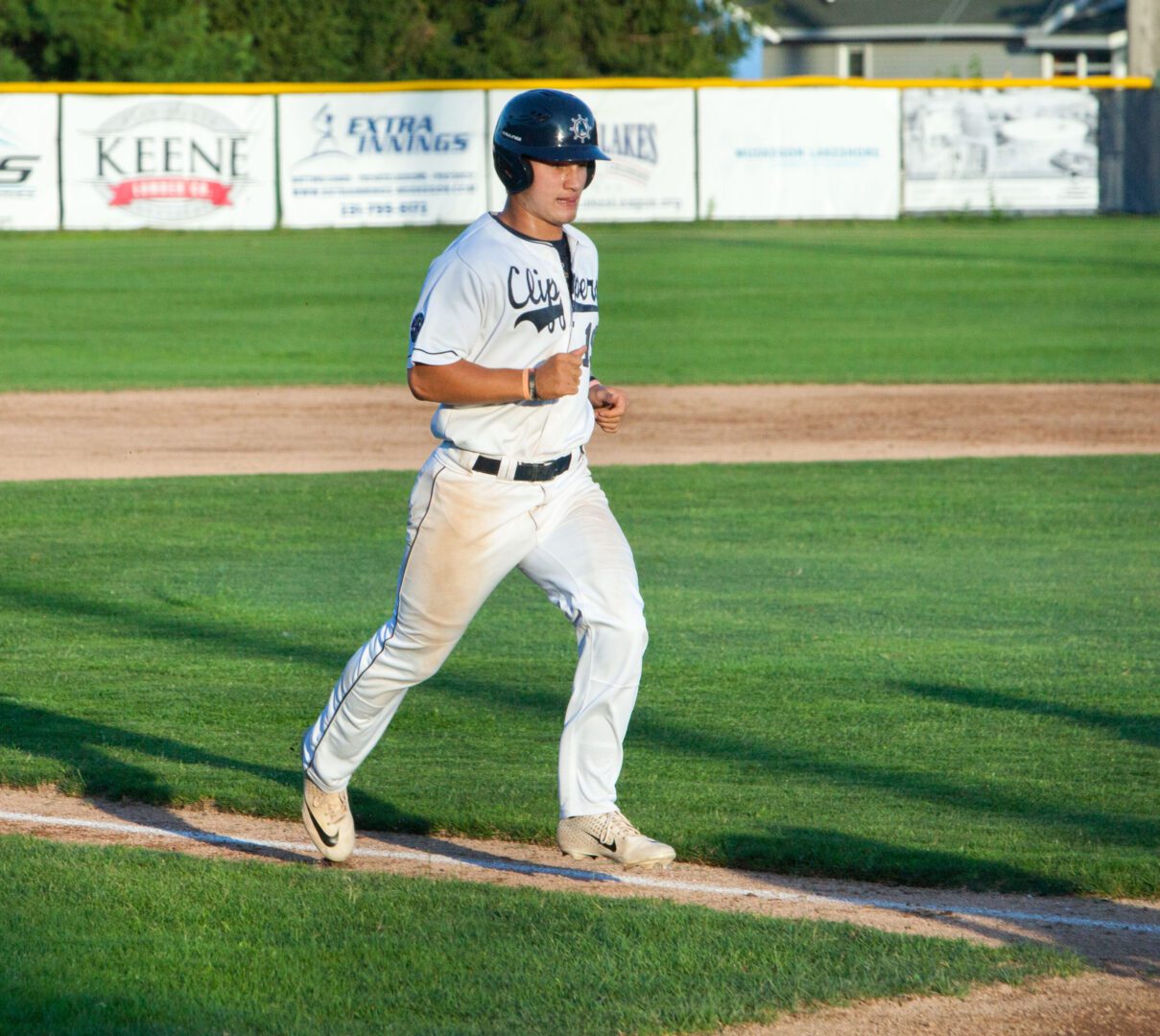