NORTON SHORES – At Mona Shores, they sure do grow up quick.

Despite having an estimated eight or nine players on offense, and five or six on

defense, seeing their first significant playing time on varsity, the Sailors performed like proven veterans in a 28-7 win over East Kentwood in their season opener on Friday at Sailor Stadium.

Senior Tre’Shawn Hatcher, who said he had only around 60 carries a year ago, was one player stepping into a much larger role. He responded to the tune of 223 yards on 25 carries and two touchdowns.

Hatcher said he was playing the game with a heavy heart, because one of his close friends, Mervin Bonner Jr., was shot and killed in Muskegon on Sunday.

“He was like a brother to me, so it feels like I lost my brother,” Hatcher said. “So to hear that I got (over) 200, it feels good. I really needed this. I wanted to ball out for him.” 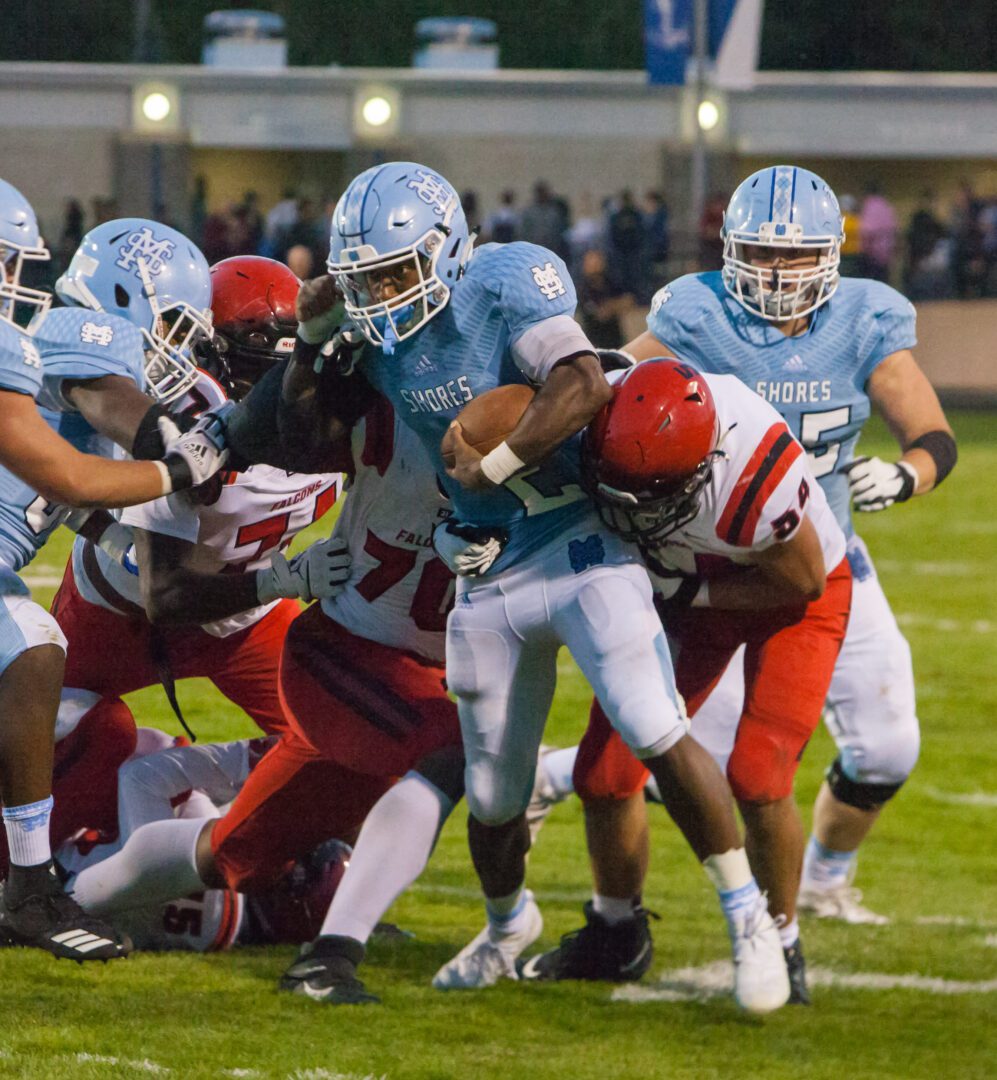 Tre Hatcher stands for more ground as the East Kentwood defenders struggle to take him down. Photo/Jason Goorman

While Hatcher was definitely a bright spot, Mona Shores’ head coach Matt Koziak was equally impressed with the Sailors’ defense, which limited the Falcons to just 195 total yards. A year ago, East Kentwood put 38 points on the board against Mona Shores.

“Everyone is so focused on stars nowadays, but with this group, we’ve got so many kids that don’t have any stars that play with chips on their shoulders,” Koziak said. “They play with grit and that’s our whole team motto. We embrace it and we want that to be our identity. I think our defense is all over that word.”

Mona Shores had a 15-0 lead at the half, with Hatcher scoring on touchdown runs of 14 and 20 yards.

The Sailors’ veer offense was orchestrated well by quarterback Brady Rose, who threw for 92 yards and just one interception. Rose is filling in for senior Caden Broersma, who is expected to miss at least another week while recovering from a broken hand.

“But he’s so cool back there, he never gets rattled,” Koziak said. “You can’t measure what he bring to us.” 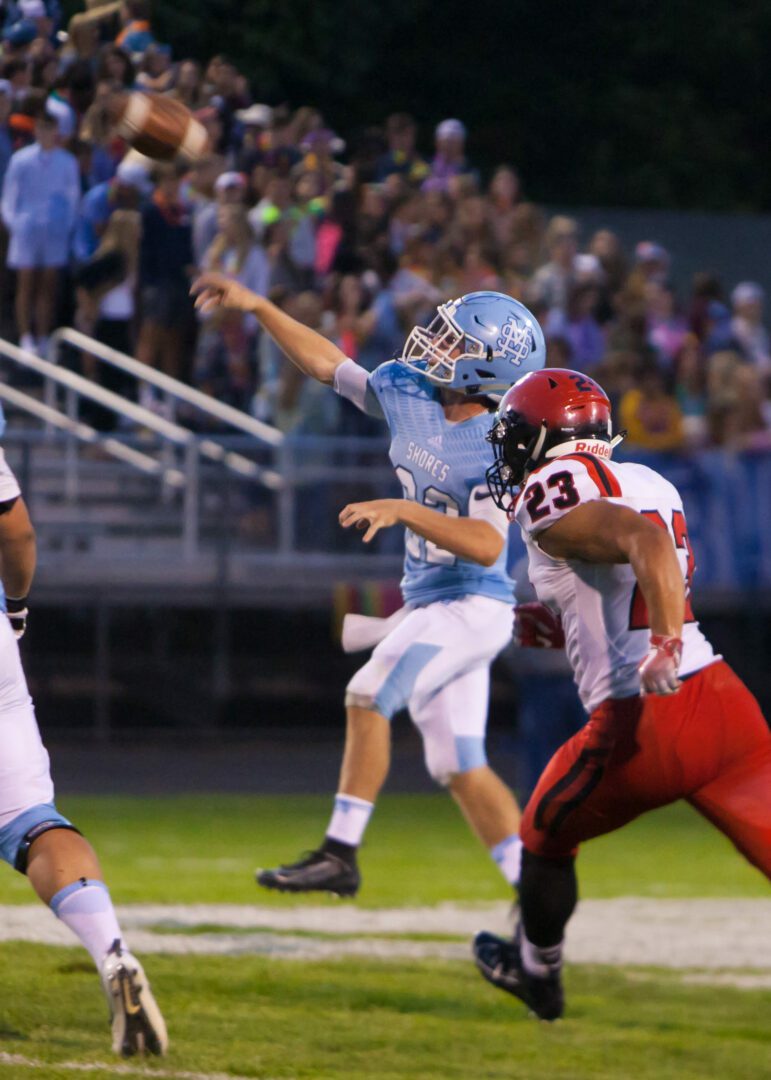 Mona Shores took advantage of a costly roughing the passer penalty on the Falcons in the third quarter, which negated a Rose interception. With a short field in front of them, the Sailors needed just three run plays to find the end zone, with Khyree Hamel scoring on a 3-yard run to make it 21-0.

The Falcons ended the Sailors’ shutout bid early in the fourth when Tanner connected on a 15-yard touchdown pass to receiver William Berris. Then the Sailors buckled down, turning in an impressive 10-play, 70-yard drive. Rose found a nice hole between left guard and tackle to score on a 2-yard keeper to ice the victory with 4:43 left.

“Brady might be small, but he’s got a big heart,” Hatcher said. “It took us a little bit to get going. We started kind of slow at first. But he started to pick (the tempo) up. He’s a great leader out there.”

Defensively, linebacker Cam Sobish led the Sailors with seven tackles, while Rose had an interception from his safety position early in the fourth. Lineman Tre Word led the impressive Sailors’ defensive front with a first-half sack on Tanner.

The Mona Shores victory was a big statement for those fans who wondered if the Sailors would be as good this year, after losing so many players to graduation.

“Man, life goes on,” Hatcher said. “We lose seniors, we’ve had guys quit, but we keep moving on. Here, it’s like we got this train. Some people step off, and some people get back on. But we’re going to keep rolling.” 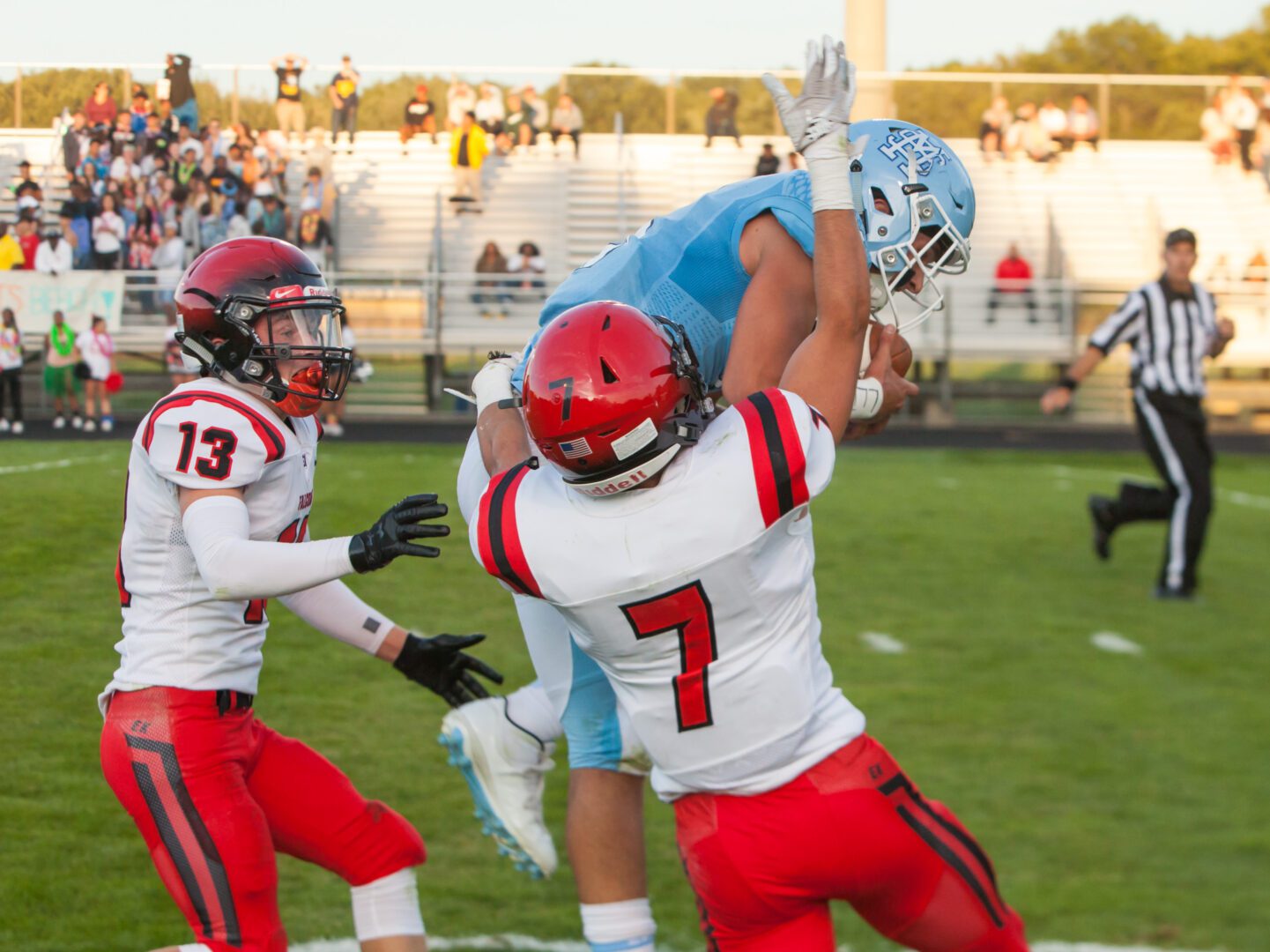