MONTAGUE – As a senior leader on the Montague football team, Brennan Schwarz admits he’s not a vocal, “rah-rah” type of player.

“For me, the type of person I’d always look up to was (departed senior) Evan Eilers,” Schwarz said. “He was one of those guys who wasn’t the

most vocal, but he’d let his play do the talking. Or you’d see him in the weight room and his whole shirt would be just

“So that’s how I like to lead. I want the younger kids to see the way you play, the way you carry yourself.”

There’s a lot for the younger Wildcats to admire in Schwarz. His elite athleticism sets him apart from the pack. He’s a 6-foot-2, 205-pound wide receiver and safety who head coach Pat Collins said is capable of running a smooth 4.65-second 40-yard dash, complete with a 40-inch vertical leap.

Schwarz, a returning Division 5-6 All-Stater at safety, also seems to come up with big plays in the biggest games. During the Wildcats’ Division 6 state finals loss to Jackson Lumen Christi at Ford Field last November, Schwarz hauled in a pair of long touchdown catches in the fourth quarter to draw the Wildcats within striking distance. 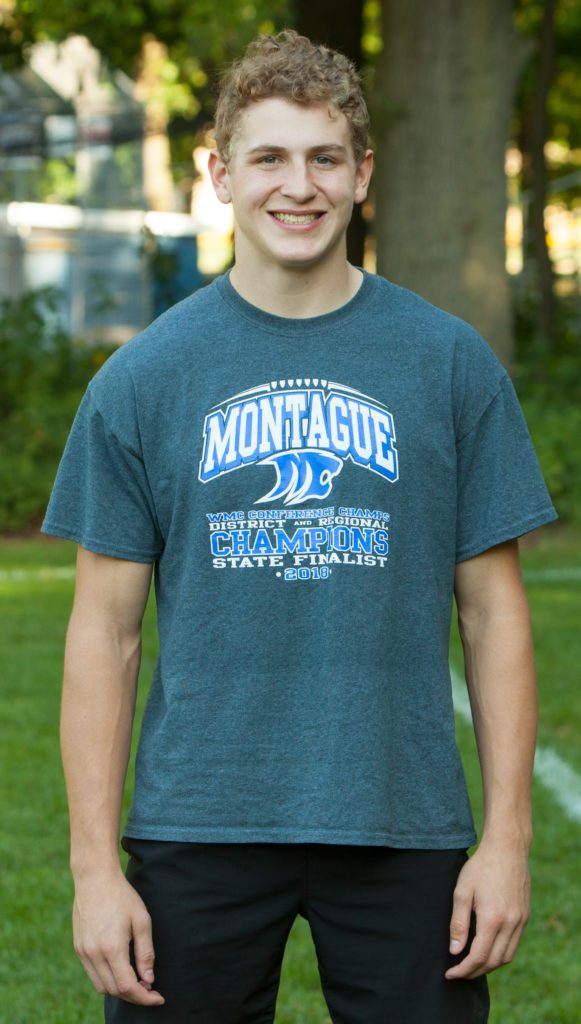 One of his biggest catches came earlier that season against rival Oakridge. His reception and spectacular tackle-breaking 80-yard sprint to the end zone allowed the Wildcats to rally, eventually erasing a 14-point fourth-quarter deficit and winning on a 2-point conversion by Sebastian Archer with no time left.

“It was like a movie,” Schwarz said of the victory. “It was definitely the craziest game I’ve ever played in. But it was also the most fun.”

Both Montague and Oakridge are rolling again this fall with perfect 4-0 records, despite both schools losing strong senior classes to graduation. The West Michigan Conference rivals will square off again on Friday, with a potential league title and valuable playoff points up for grabs.

“(The game) is marked on everyone’s calendar,” Schwarz said. “We’re always looking forward to it, although it’s a tough week (of practice) leading up to it.”

Montague coach Pat Collins said this year’s team has fewer players than in previous seasons, but it includes a core group of about 15 players who gained valuable experience during playoff runs in recent years. They learned how to win and they’re still winning.

“The kids know the expectations,” Collins said. “In the previous seasons, the younger kids have gotten a little more time to soak everything in. We’ve been building on these runs in the postseason, so they get to be a part of it firsthand. But still, we’ve been fortunate. We’ve had some kids really step up after a really good group of seniors left.”

Schwarz was one of those key underclassmen who elevated his game. Last season, as a junior, he totaled  33 catches for 756 yards and seven touchdowns as a receiver and 130 tackles and three interceptions on defense. 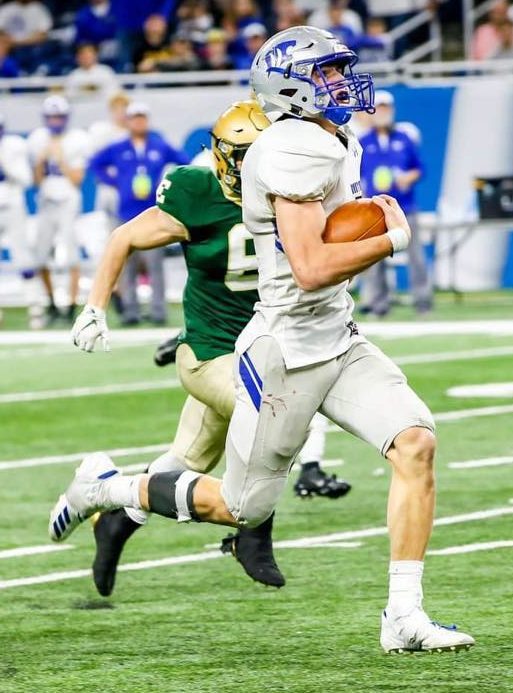 Schwarz breaks off a big gain for Montague during the Wildcats’ state final appearance in 2018. Photo/Tim Reilly

He accomplished all of that despite painful circumstances. During the summer prior to his junior season, Schwarz said he felt a “pinch” in his knee while doing squats in the weight room. He continued to grind through it last year, using heat and ice to lessen the pain.

When it became an issue again this summer during workouts, he decided to finally visit the doctor and found out he had a partial tear of his patella tendon, as well as tendonitis in his knee.

“There was no time left to do anything about it before this season, so I’m going to have surgery after the football season,” he said. “It’s just something that I’ll have to deal with again.”

A slightly injured Schwarz is still one of the better players in West Michigan. On offense he’s a favorite target of quarterback and close friend Drew Collins, leading the team with 11 catches for 264 yards and four touchdowns.

“He’s just built long,” Pat Collins said. “He’s got the length of an athlete with long arms and legs. At safety he’s a tremendous hitter and has a knack for the ball. He’s got that 40-inch vertical, so he’s capable of going up and getting the ball at its highest point.”

Coach Collins is thankful Schwarz’s family settled in Montague, after moving to Michigan from Colorado due to a work transfer when Brennan was in third grade. He started playing football two years later.

Now he’s on a path to playing at the next level, with a pending scholarship offer from Ferris State University and strong interest from Davenport University.

“That play (against Oakridge) showed what kind of freak ability he has,” Collins said. “He proven that he’s a man amongst boys out there.”