MONTAGUE – In a rivalry that’s had almost everything imaginable happen over the past decade, Montague and Oakridge had a finish on Friday that was much the same as it was a year ago:

A 2-point conversion to determine the winner, but this time it was Oakridge that triumphed 15-13 in a West Michigan Conference overtime thriller between undefeated teams.

After taking a 15-7 lead on the first possession of overtime on a Leroy Quinn 3-yard touchdown run and successful 2-point conversion, the Eagles’ fortunes rested on their defense.

It didn’t start well for Oakridge when the Wildcats got the ball. Montague senior wide receiver Brennan Schwarz made a spectacular catch with one foot down in the corner of the end zone on a high pass from quarterback Drew Collins, bringing the Wildcats to within two points at 15-13.

Instead of going back to the well with another pass to Schwarz, Montague chose to keep it on the ground with Collins on a designed run. Oakridge read the play perfectly and a host of defenders stuffed Collins well short of the goal line, creating a mad rush of Eagles’ players from the sideline to midfield, celebrating their victory. 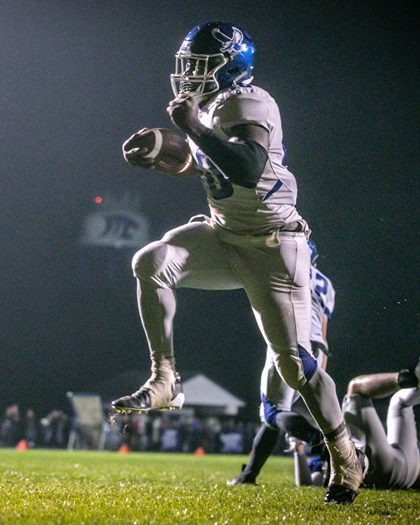 The win snapped a two-game losing streak to the Wildcats and keeps Oakridge atop of the West Michigan Conference with a 4-0 league record (5-0 overall). Montague fell to 4-1 overall and 3-1 in the conference.

Quinn, who also stars on defense for the Eagles and was in the middle of the game-winning tackle, said the Eagles were alerted before the final play when Montague sent a man in motion to the right.

“That definitely gave it away,” he said. “We all knew (Collins) was going to run, especially when he didn’t try to fake it. I’m glad they ran that play.”

Oakridge coach Cary Harger said he had mixed emotions when the contest went into overtime deadlocked at 7-7. Sure, the win was in reach, but he also had to make sure his team executed.

“We had to get them settled,” he said. “We asked for four big plays on both sides of the ball.”

Oakridge had the first possession in overtime, and Harger said the goal of his offensive line was “to just pound” with Quinn running behind them. The right side of the line responded, featuring tackle Nate Fair, guard Jaxon Pego and tight end Luke Martin, springing Quinn free when he appeared to be stopped at the line of scrimmage on both his touchdown and 2-point conversion runs.

The four quarters of regulation play was a struggle for both offenses. Consistent rain and a rash of penalties on both sides limited Oakridge to just 212 yards of total offense, while Montague mustered 231. They combined to punt nine times. 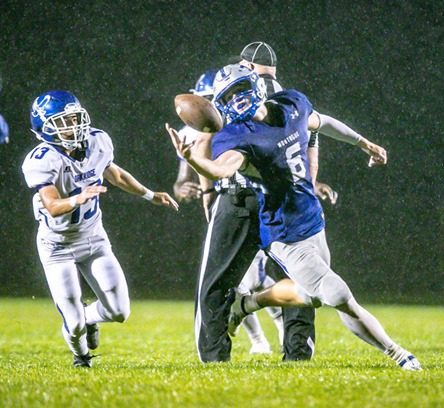 The contest was scoreless through three quarters, then Oakridge finally hit paydirt on the first play of the fourth when Quinn completed a successful 5-minute drive with a 12-yard touchdown run. He finished with 133 yards rushing in regulation on 22 carries.

As the rain began to let up in the fourth quarter, Montague’s offense also woke up. Keyed by two big catches by Remington Schneider for 30 and 29 yards, the Wildcats finally sustained a drive and finished with a 4-yard keeper by Collins. The extra point was good, tying the contest.

Neither team could keep its offensive momentum going in the final seven minutes, however, and the showdown went to OT.

“We didn’t throw anything out (of the playbook),” said Montague head coach Pat Collins. “We were still running the ball, throwing the ball. It just didn’t look the same because the ball was fluttering a little bit.

“I’m just frustrated with the entire night,” he added. “But I’m happy with our kids. They fought all night long.”

Drew Collins completed 9 of 16 passes for 161 yards, plus his touchdown throw in overtime. He also led the Wildcats’ run game with 60 yards on 17 carries.

Defensively, Josh Havermans had nine tackles to lead Oakridge, while Johnny Monette had 11 for Montague.

With a smile plastered on his face, Quinn said the long-awaited victory felt “amazing.”

“We’ve been looking for revenge all year,” he said. “It doesn’t (erase last season), because I hate losing, but I’ll take this.” 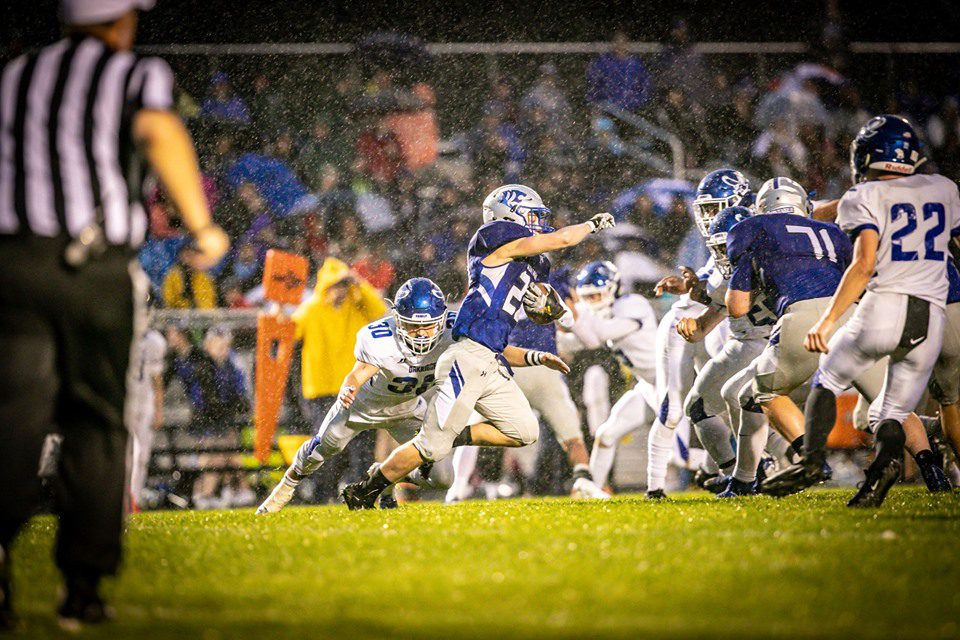 Dylan Everett on the rush for Montague as Oakridge’s No. 30 Jacob Danicek goes in for the tackle. Photo/Tim Reilly 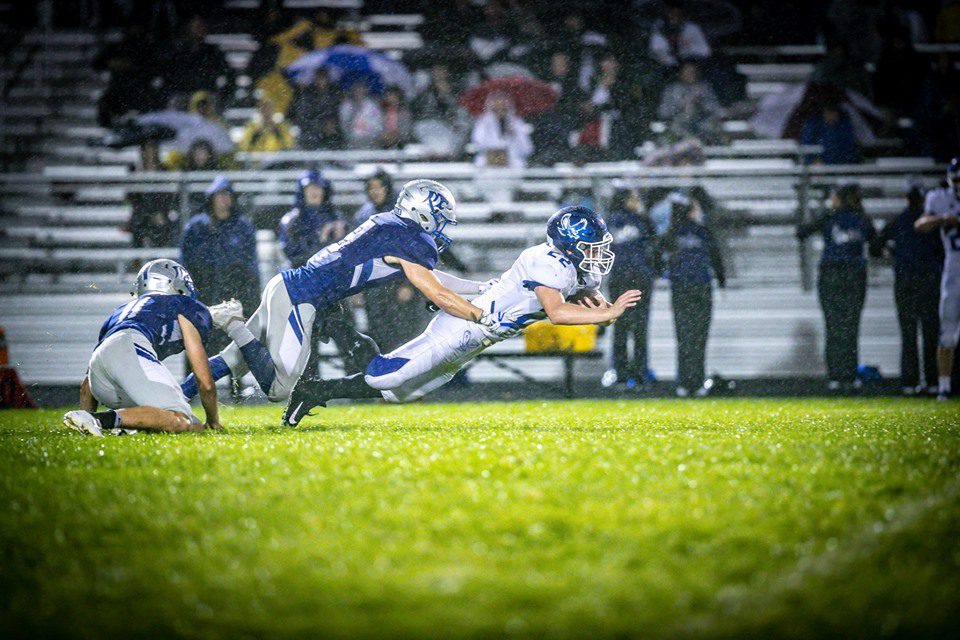 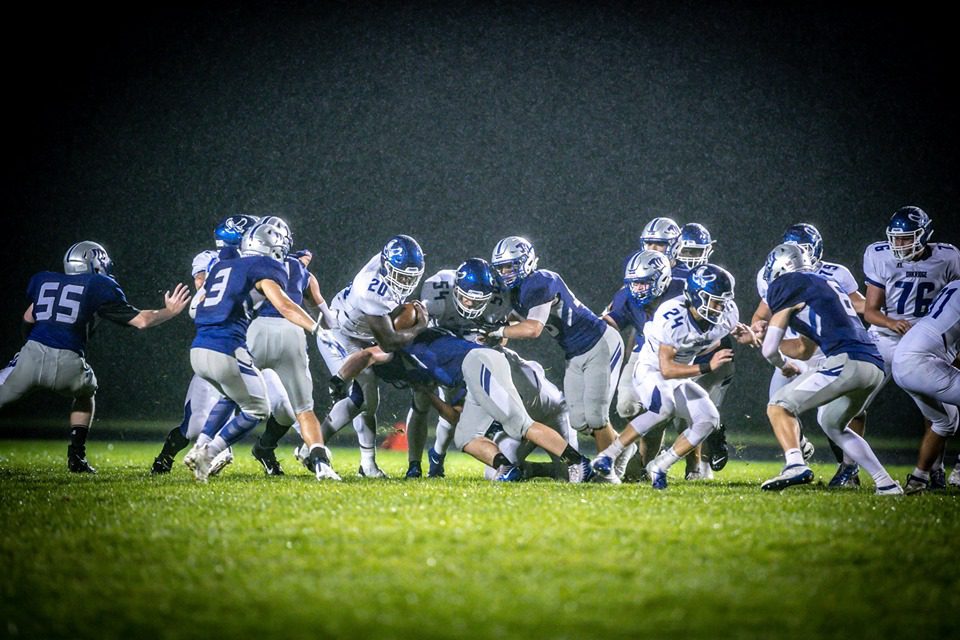 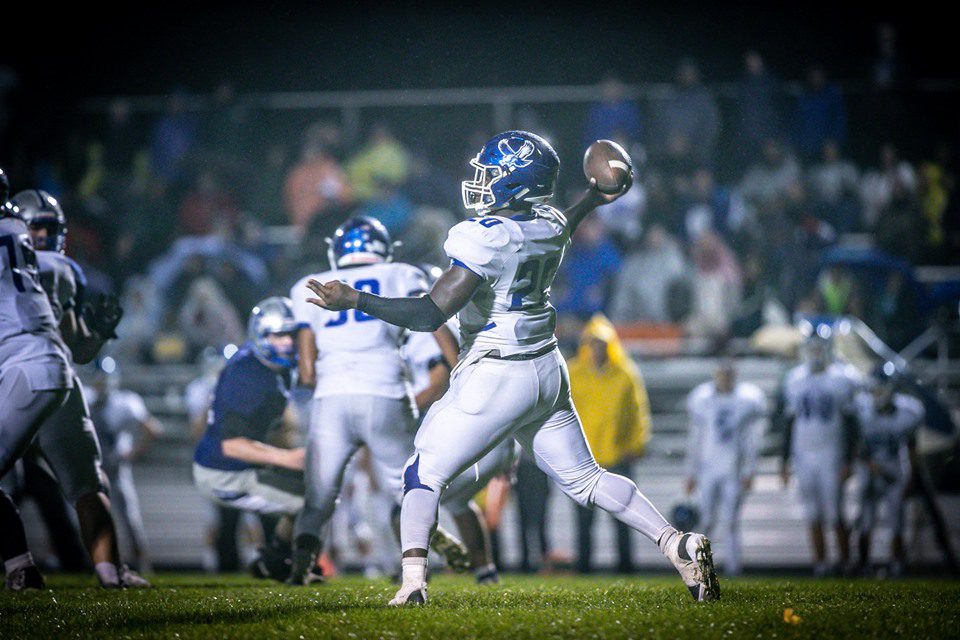 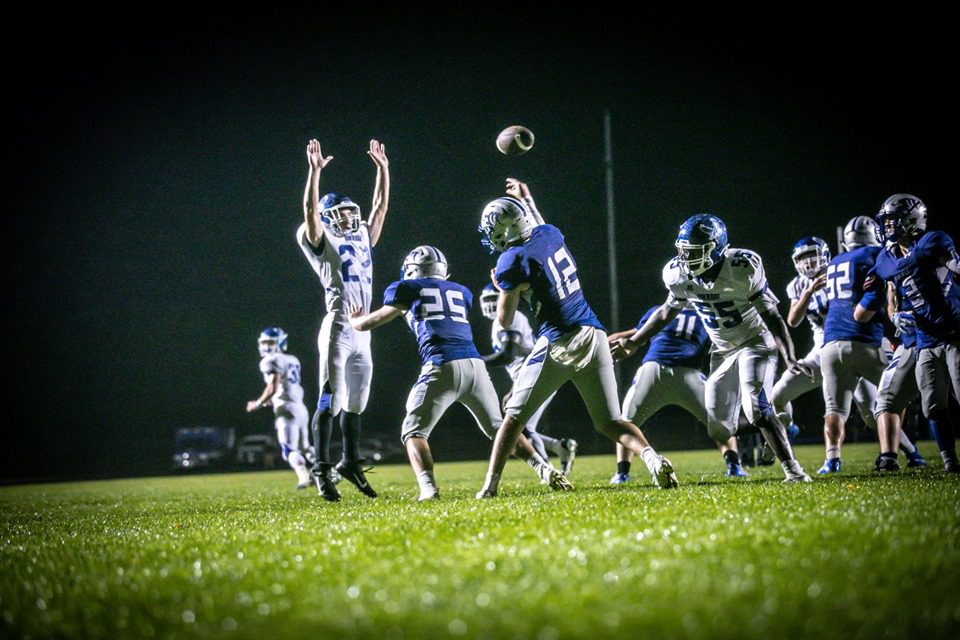 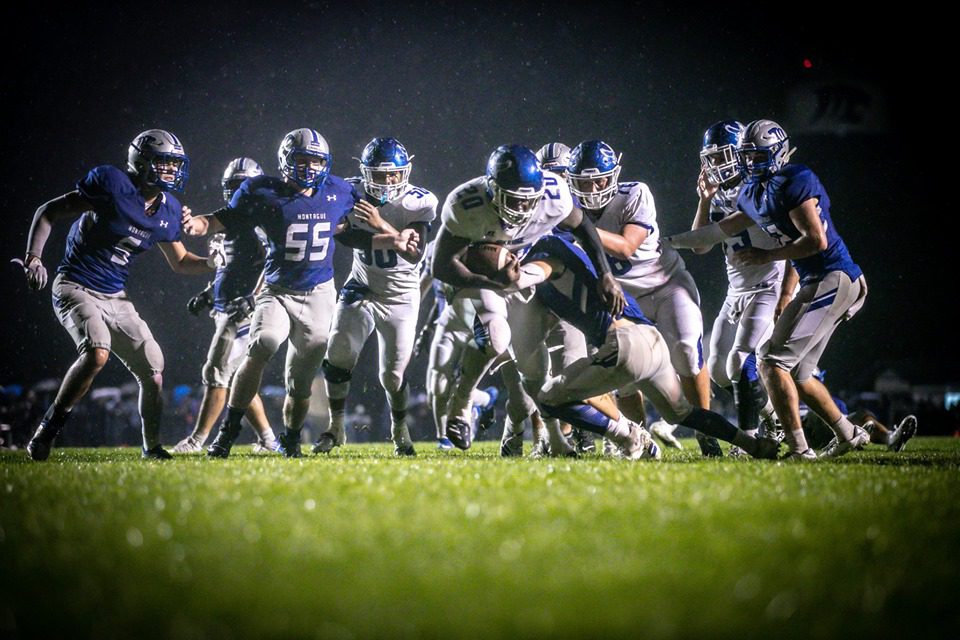 No. 20 Leroy Quinn looks for room up the middle for Oakridge. Photo/TIm Reilly 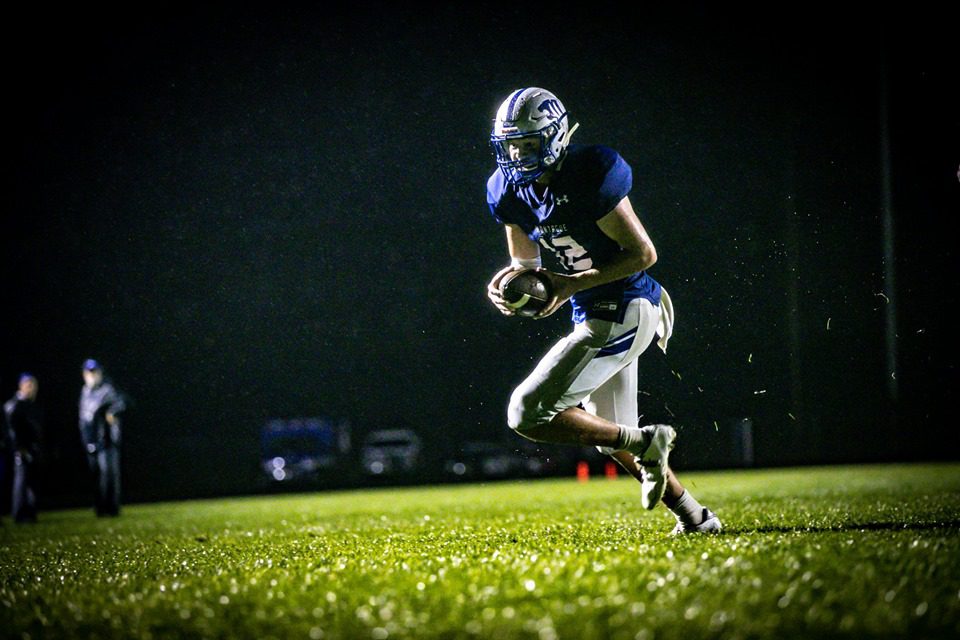 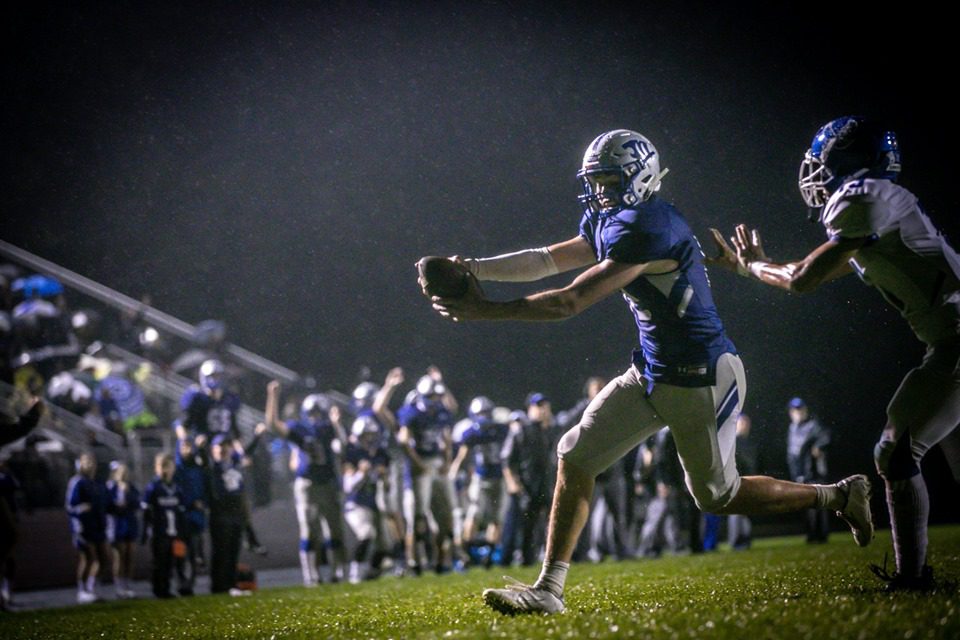 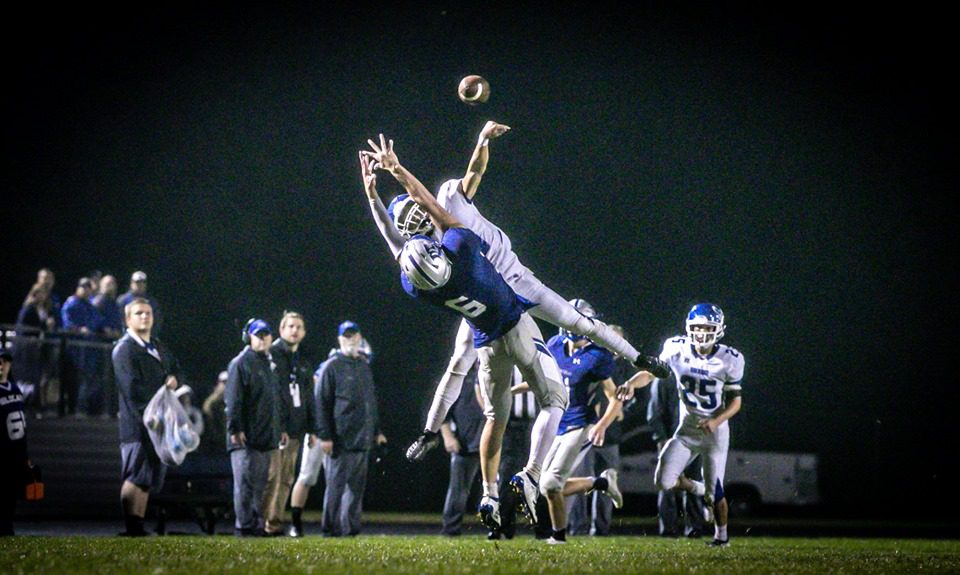 Coco Watson breaks up the Montague pass to No. 6 Brennan Schwarz. Drew Collins finds rooms around the corner for Montague. Photo/Tim Reilly 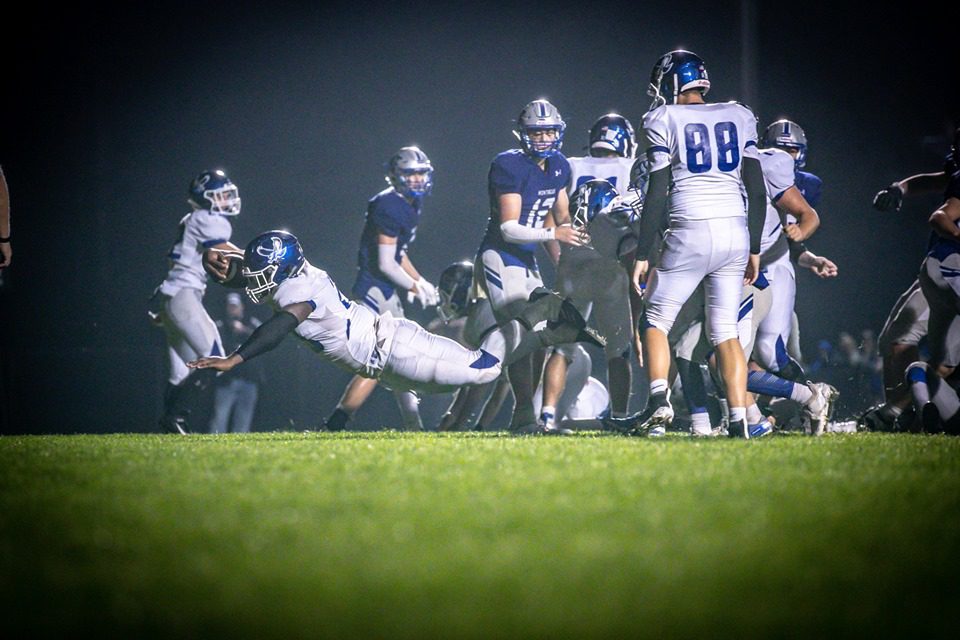 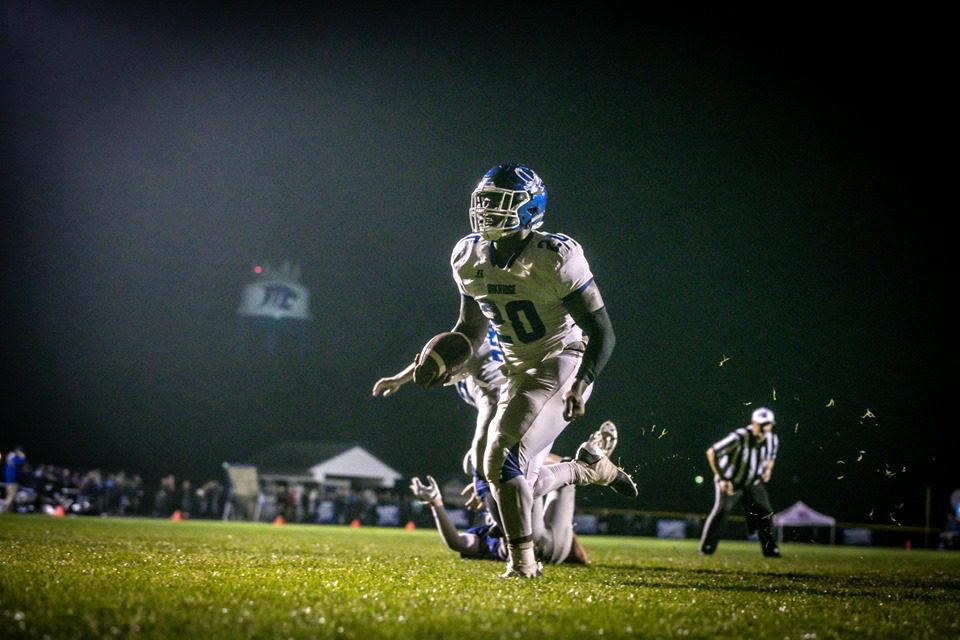 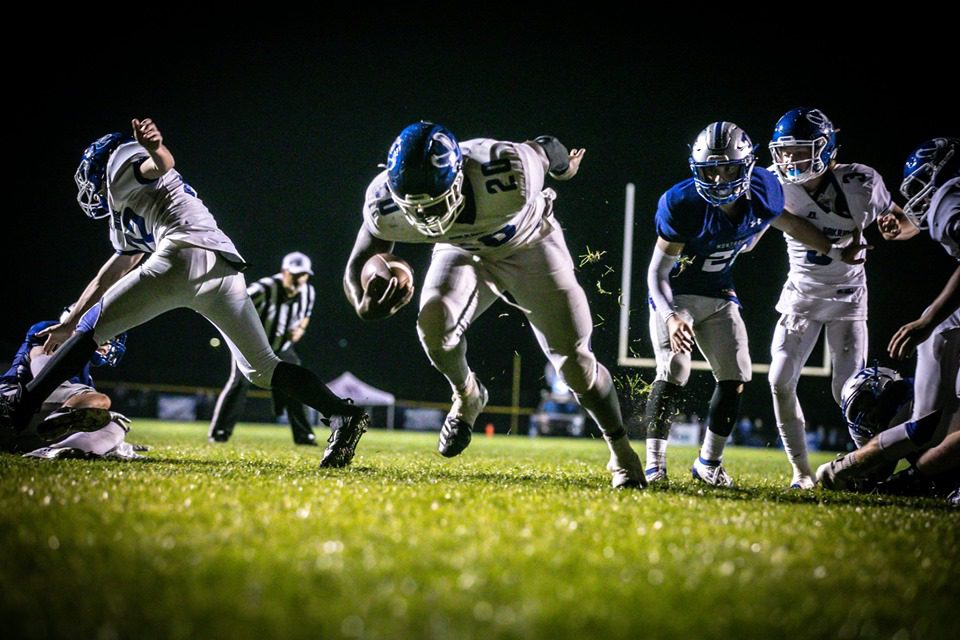