JENISON — Reeths-Puffer didn’t have any problem lighting up the scoreboard on Friday at Jenison’s David McKenzie Stadium.

But the Rockets missed some crucial opportunities to score even more points, and in the end, they needed more.

The Rockets had a halfback pass for a touchdown negated by penalty right before halftime. On their potential game-winning drive in the fourth quarter, when they trailed by six, their fourth-down pass inside Jenison’s 30-yard line came up about seven yards short.

That allowed the host Wildcats to hold on for an exciting 42-36 Homecoming victory over the Rockets in O-K Black Conference action.

“As a program, we’re going to get better at that, but that’s where our inexperience shows,” said Reeths-Puffer’s first-year head coach Matt Bird. “We have to understand in big games, we gotta capitalize in those situations. 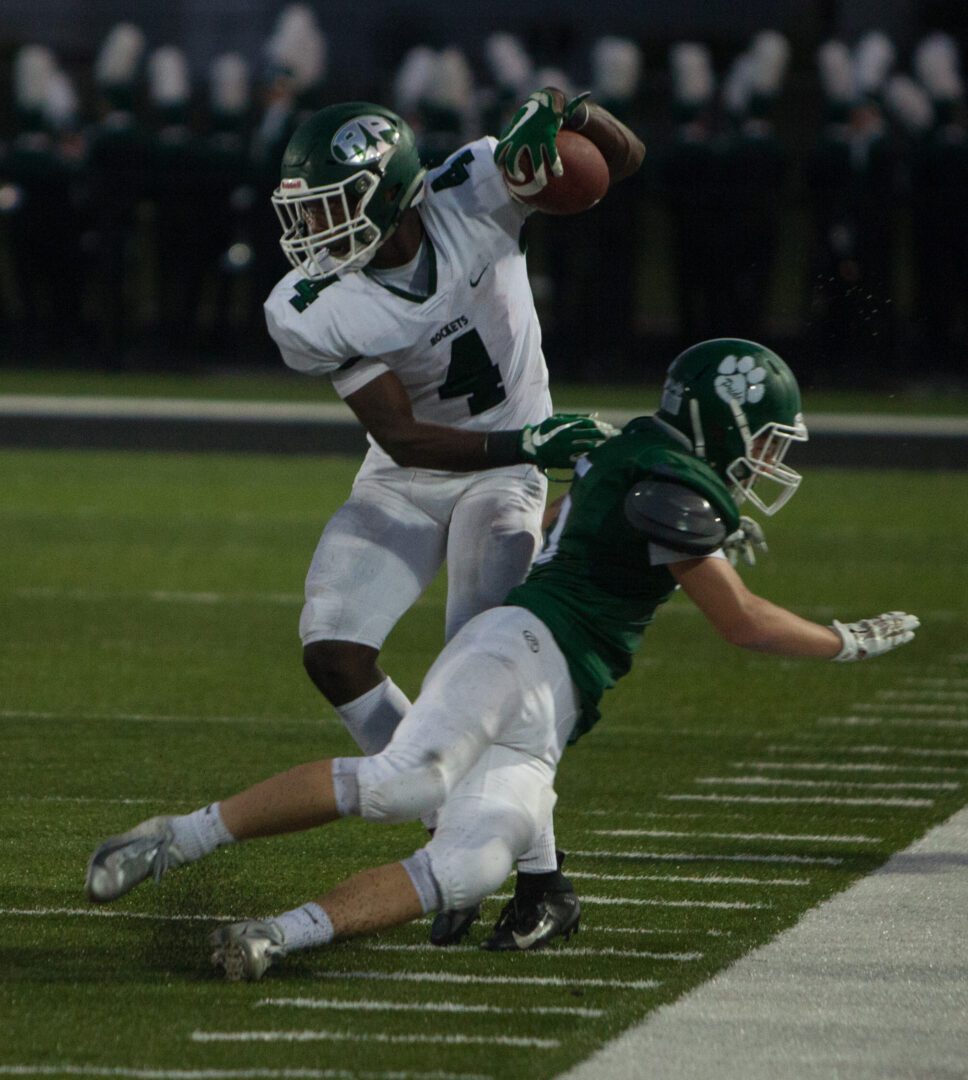 Daven Fox changes direction on the rush and leaves the Jenison defender behind. Photo/Jason Goorman

“But we’re learning, we’re still battling. The more big games we play in, the better we’ll be.”

With the tough setback, the Rockets fall to 1-3 overall and 0-2 in the O-K Black Conference. The Rockets would have to win their final five games to reach the necessary six victories for an automatic playoff berth. Jenison improves to 2-2 and 2-0 in league action.

The loss shouldn’t dim a tremendous individual performance by R-P senior running back/receiver Daven Fox, who had 10 catches for 176 yards and a touchdown, plus a 96-yard kickoff return for another score.

Reeths-Puffer essentially ditched the running game against a stacked box deployed by the Wildcats, resulting in some huge passing numbers by senior quarterback Evan Moskwa. He completed 26-of-40 passes for 407 yards and three touchdowns.

Reeths-Puffer should have had the lead at halftime, but a perfectly-executed halfback touchdown pass by Fox was called back due to a holding call. Then, on fourth-and-goal from the 19, Moskwa’s pass appeared to be tipped by a Jenison linebacker, but still found its way to Fox in the end zone. He got his hands on the ball, but couldn’t corral the catch.

“It’s tough, we score and then a penalty and the next play, we had the right play called,” Bird said. “(Fox) makes four more great plays right after that, but that one, we struggled with.” 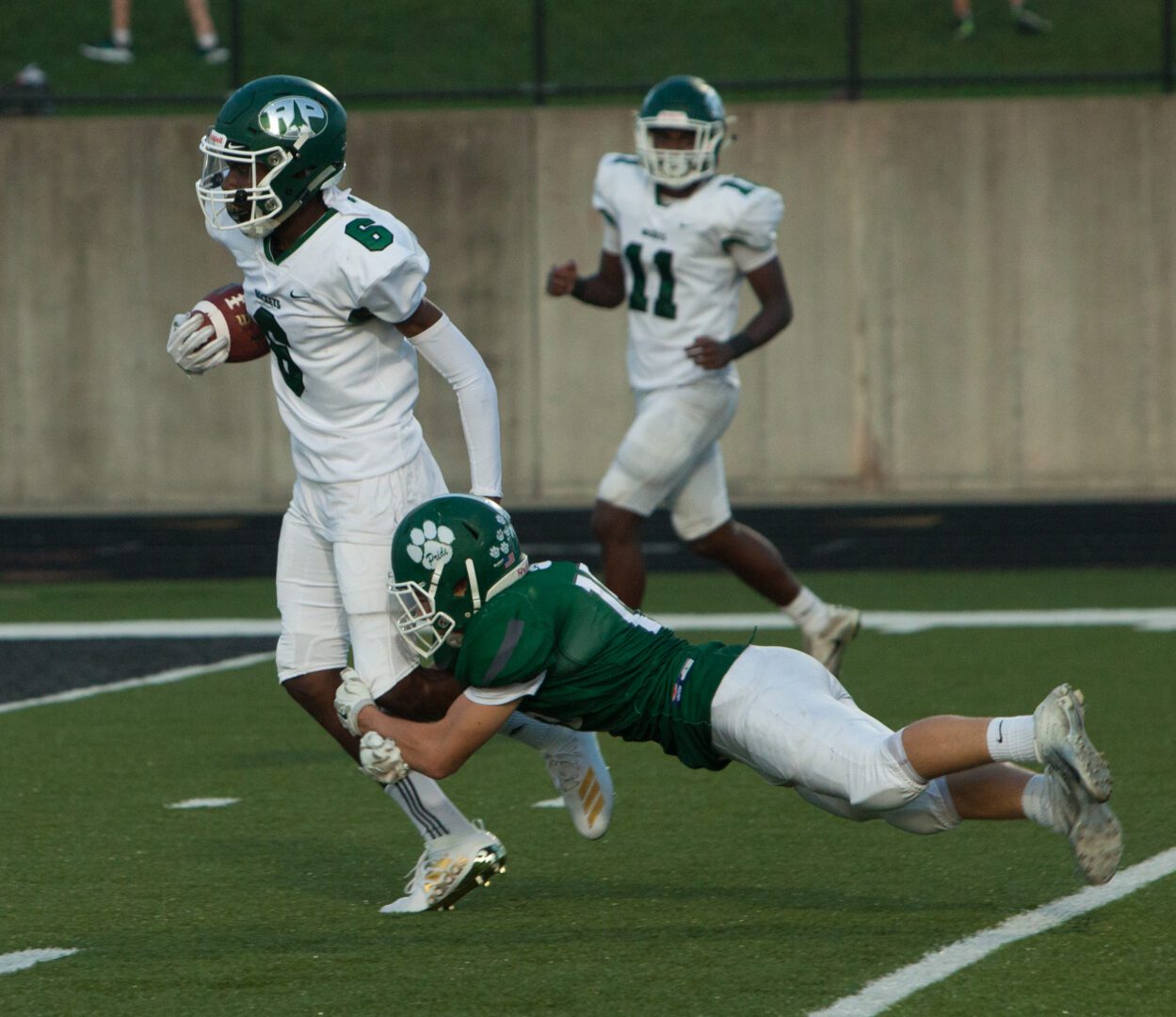 Jenison’s run game came out rolling in the third quarter, resulting in a Wildcats’ scoring drive, but Fox answered with his electric kickoff return, cutting the Rockets’ deficit to 21-19 with 7:32 left in the quarter.

After a defensive stand, Reeths-Puffer took its first lead since midway in the second quarter, when Moskwa hit senior Emcee Williams with a 63-yard touchdown pass. Williams was the Rockets’ other big-play receiver with six catches for 155 yards and two touchdowns.

But the Rockets struggled in slowing down the Wildcats’ run game, and it cost them. A 44-yard sweep by senior Zymarius Walker helped set up Jenison’s next score, a 14-yard fade pass from quarterback Jaden VanDalsen to Nicholas Rathsack. The ensuing 2-point run gave Jenison a 29-26 lead heading into the fourth.

Reeths-Puffer tied the game early in the final quarter on a 28-yard field goal by Ashton Carpenter, but Jenison couldn’t be slowed. On fourth-and-4, VanDalsen connected on a quick slant to receiver Michael Care for a 5-yard touchdown, putting the Wildcats up 36-29.

Fox wasn’t done providing thrills for the Rockets. He took a short pass near midfield, broke two tackles near the 50, then received great blocking downfield to spring loose for a game-tying 76-yard touchdown.

“There’s a few (Division 2) schools showing interest in him,” Bird said of Fox. “It’s amazing to me that there’s no (Mid-American Conference) schools after him. After tonight, I think that will change.”

The only problem was, Jenison’s offense still had over five minutes to work with, and the Wildcats easily marched down the field for the go-ahead touchdown run by VanDalsen. The extra point was blocked, leaving Jenison with a 42-36 lead, and giving the Rockets an opportunity to drive for the win.

The Rockets passed their way down to the Wildcats’ 30, but a sack, an incompletion and a short gain on a screen pass left Puffer with a fourth-and-15 with 51 seconds left.

A pass to Gary Humphrey in space over the middle looked promising, but the Wildcats closed quickly, tackling him well short of the first down to ice the victory.

Despite the rough start to the season, Bird said his squad will continue to scrap.

“We’re down now, but the kids haven’t slumped their shoulders,” he said. “We fought like heck against Shores last week and we fought against a good Jenison team. We’ll learn from it and move on.” 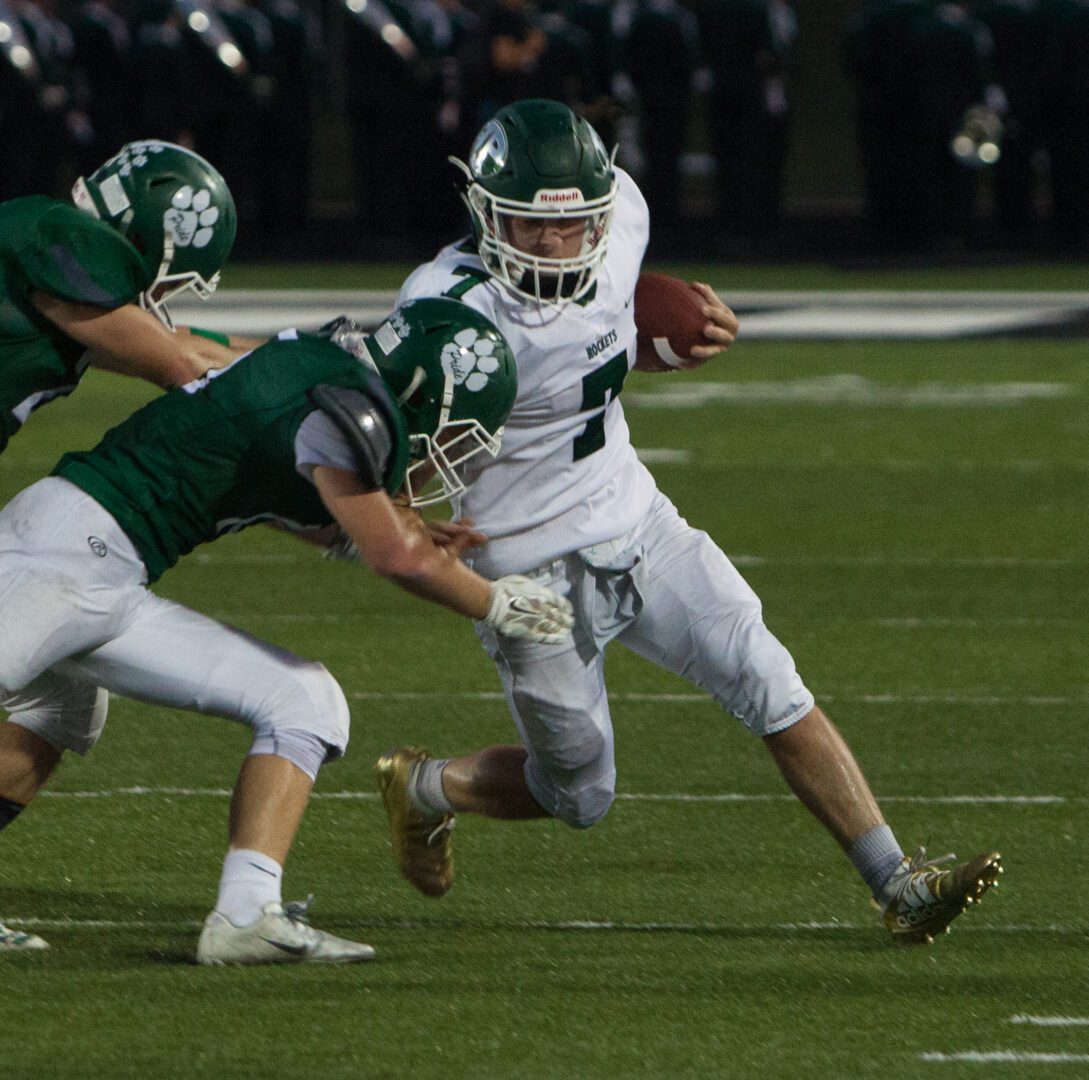 Brett Buchan finds room along the outside for Reeths-Puffer. Photo/Jason Goorman 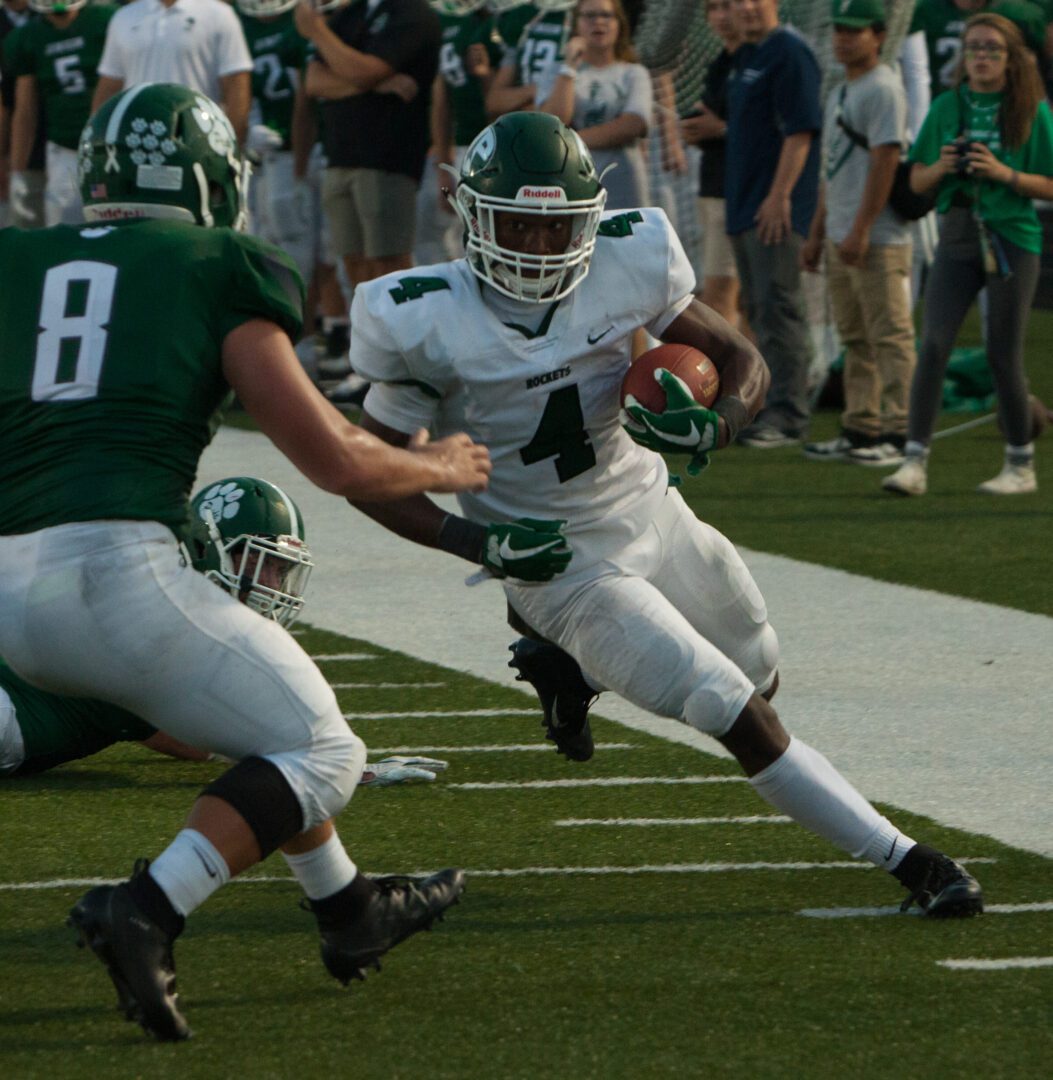 Daven Fox eyes the defender and the end zone on the rush for Reeths-Puffer. Photo/Jason Goorman 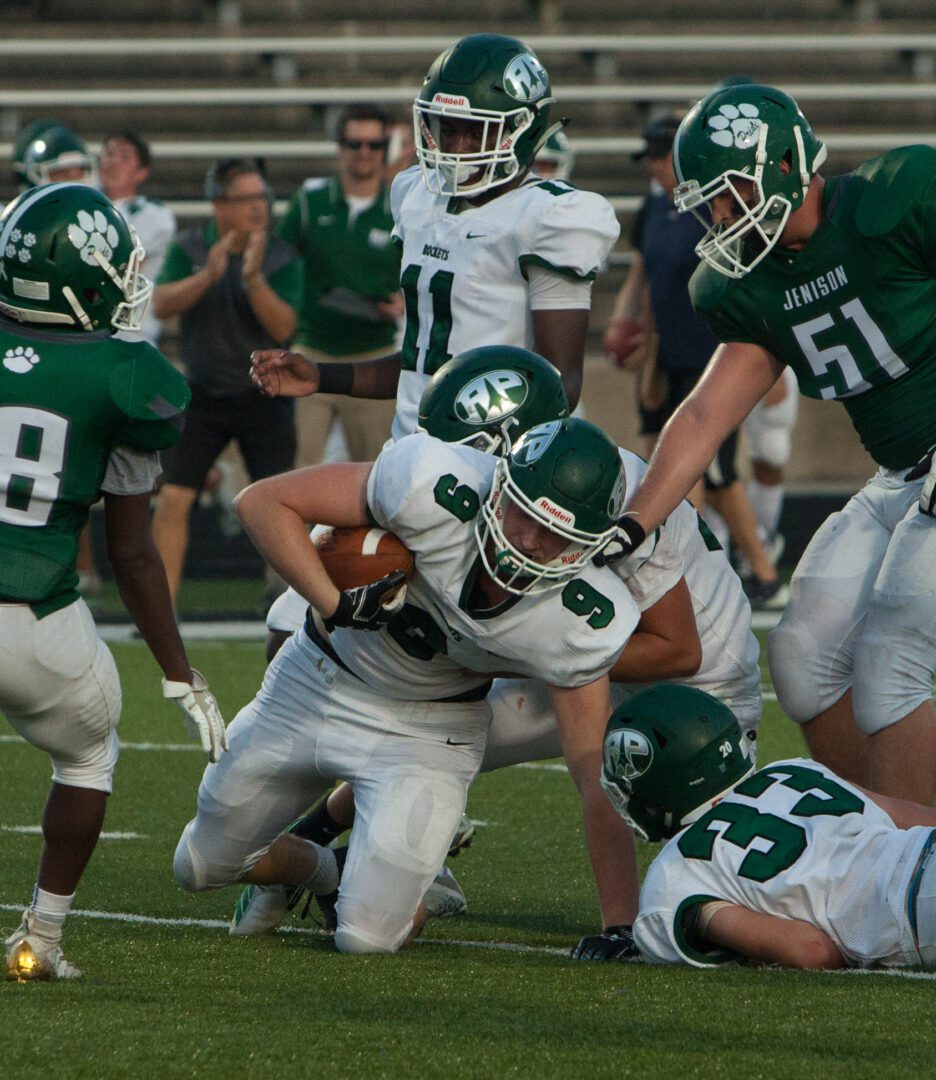 Josh Jordan comes up with the fumble recovery for Reeths-Puffer. Photo/Jason Goorman 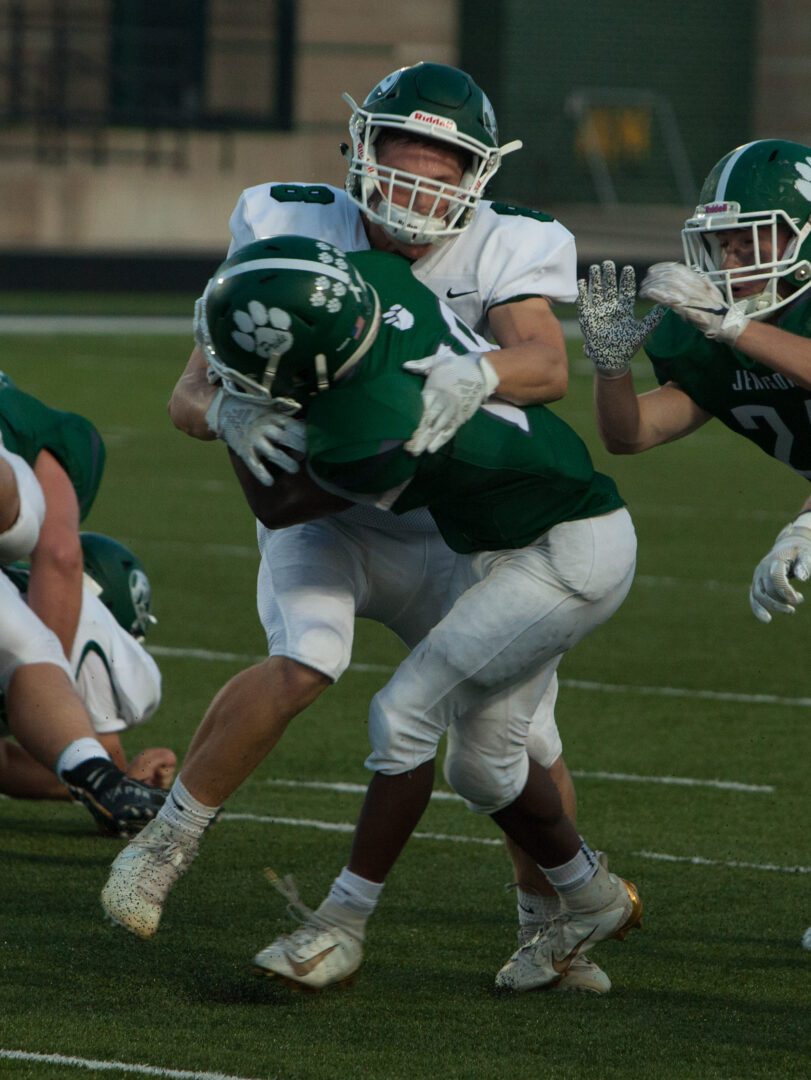 Caden Brainard comes up with a tackle for Reeths-Puffer. Photo/Jason Goorman 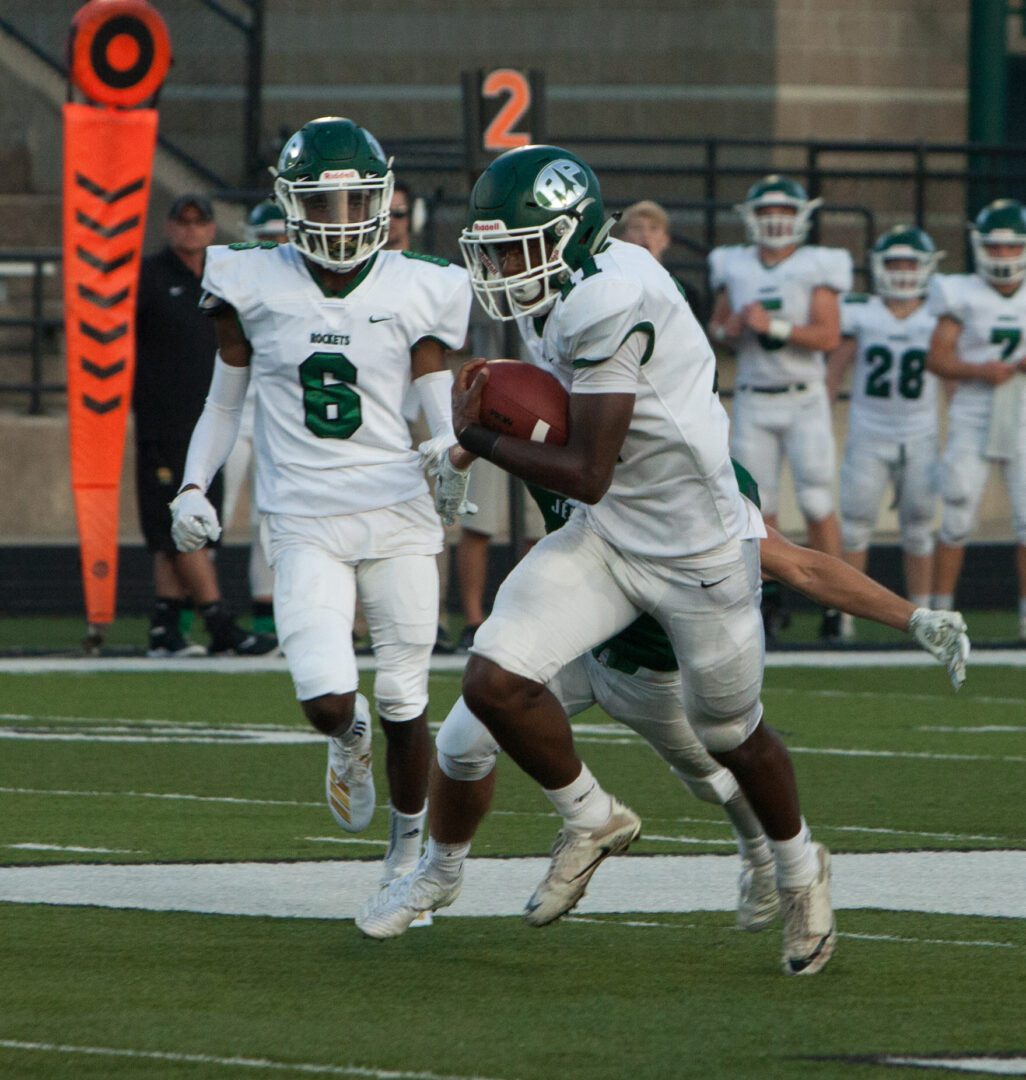 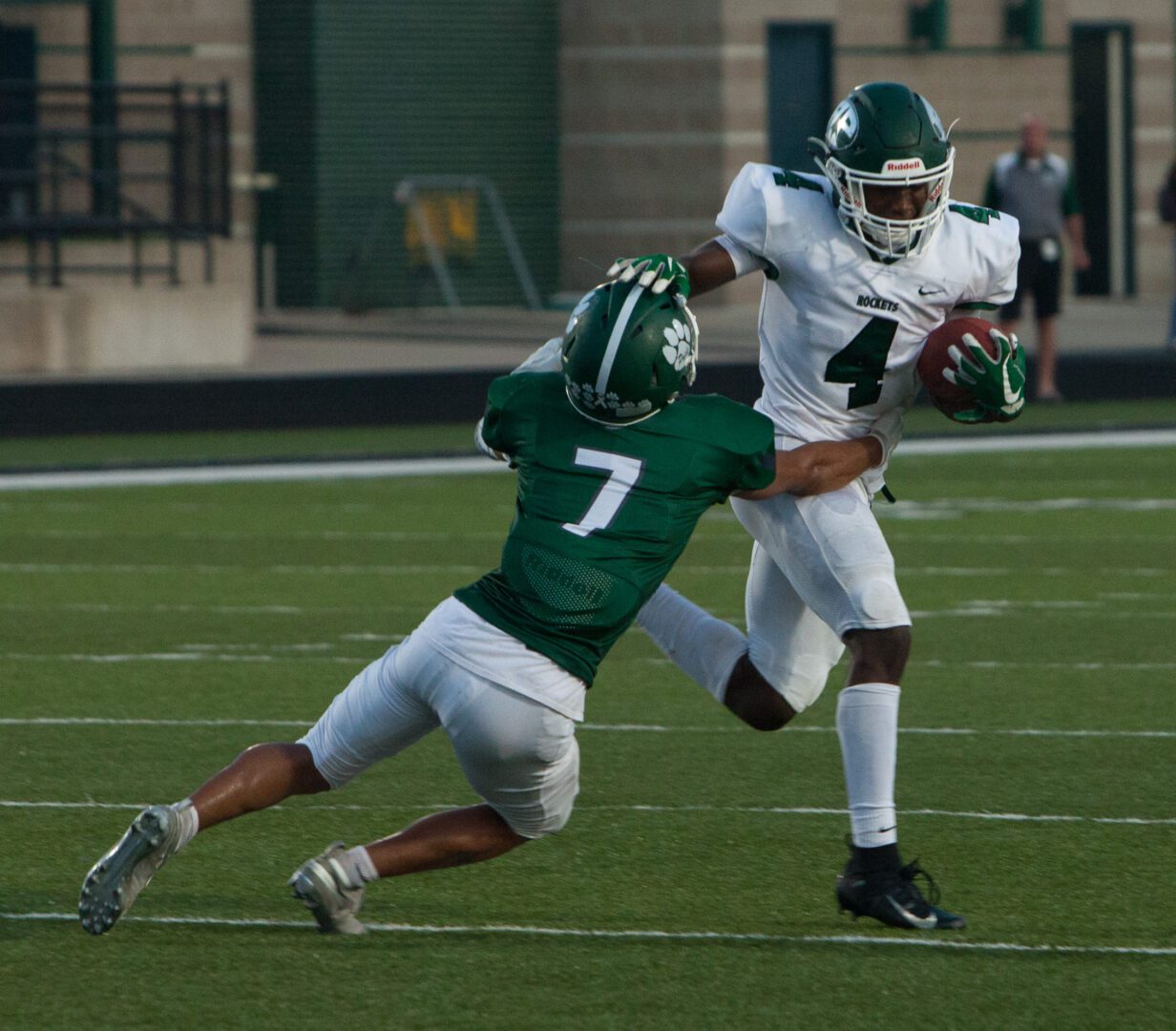