SPRING LAKE – The Fruitport-Spring Lake football rivalry has certainly had its share of barnburners over the years.

Now the Battle of the Bayou has had its first overtime thriller.

Fruitport’s Ethan Flores hauled in a 6-yard touchdown catch from quarterback Tyler Zimmerman on the Trojans’ possession in overtime, cutting their deficit to 21-20. Instead of attempting the extra point to potentially tie the game and send it to double overtime, Fruitport head coach Nate Smith rolled the dice and went for two.

The Trojans called a jet sweep with Flores, but the senior was stopped a yard short of the goal line by a host of Lakers, securing the one-point victory and setting off a wild celebration at Spring Lake’s Grabinski Field.

“We knew they were going to do something with (Flores), since he’s their best player,” said Spring Lake senior quarterback/linebacker Zach Keyser. “We knew our defense had to push forward since we were right at the goal line. There was no going backwards.” 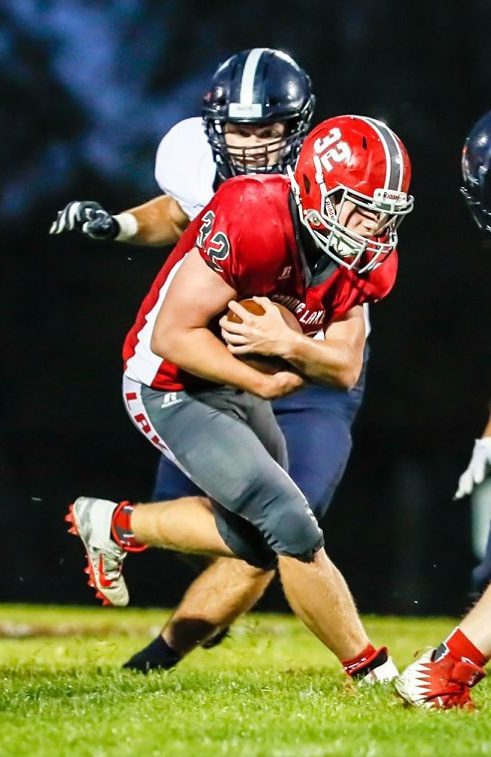 No. 32 Christian Folkert rushes up the middle for Spring Lake. Photo/Tim Reilly

Both teams had productive, sustained scoring drives in the first quarter.

Keyser threw a 6-yard touchdown pass to senior Alex Fleshsig on a drag route on the Lakers’ opening possession, while the Trojans answered with an impressive 16-play drive that ended with a 3-yard score by bruising 210-pound senior running back Crue Cooper.

The 2-point try failed, giving Spring Lake a 7-6 lead after one.

Fruitport secured its first lead with 41 seconds left in the half when Zimmerman hit Flores in the corner of the end zone for a 14-yard touchdown pass. The ensuing 2-point run by Aiden Vela put the Trojans up 14-7 at the break.

The third quarter was scoreless.

Sophomore Christian Folkert finished the drive with a one-yard burst to tie the game at 14-14 with 6:55 left.

“We were running the sweeps and having some success with that and my assistant Kyle (Jewett) said, ‘Hey, the trap looks pretty good here,’” said Spring Lake head coach Dan Start. “So we ran it and Keyser got it down to the half-yard line and we were able to pop it in.”

“Coach called my number and I knew I’d make a big run,” Keyser added. “This game was on me and my leadership. We got a great trap block from our guard and a back-side block from our center and I took off and ran with it.”

Both squads each had another possession in the closing minutes of the fourth, but each stalled, forcing what Spring Lake Athletic Director Cavin Mohrhardt said was the first overtime in the history of the series.

Fruitport won the toss and deferred, giving Spring Lake the first possession from the 10. The Lakers needed just three plays to find the end zone, with Folkert again scoring on a tough, 1-yard run between the tackles. The Lakers’ extra point by Matt Bierman gave the hosts a 21-14 advantage. 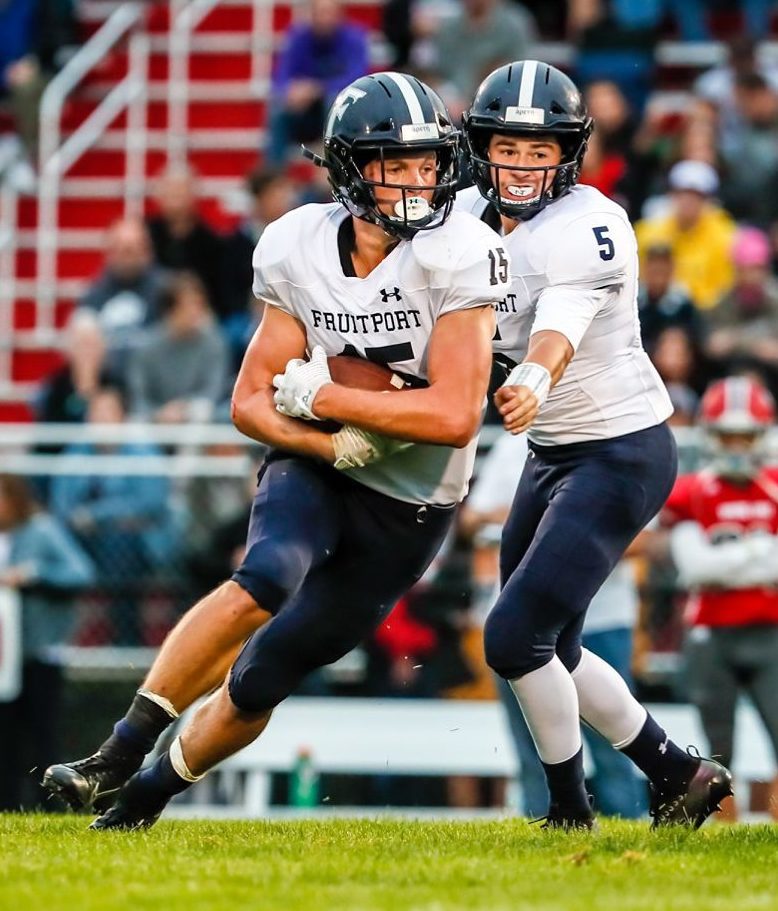 Fruitport had much more difficulty on its overtime possession. The Trojans faced fourth-and-11 and Zimmerman threw an incomplete pass near the goal line. But the Lakers were flagged for pass interference, and on fourth-and-6, Zimmerman connected with Flores for a touchdown pass.

But the Trojans’ gutsy attempt to win the game with a two-point conversion fell a yard short.

The Trojans could muster just 89 yards in the second half against an inspired Lakers defensive front.

“Our defensive line started pinching down because they were trying to run up the middle on us,” Keyser said. “That was our weakness against OV, so (Fruitport) tried to expose us, too.

“I just told my boys at halftime, they needed to ride with me in that second half,” he added. “Our team came out and rode with our senior class. We played so hard and came out with a win. This is a huge turning point for our team.”

Cooper had 70 yards on 17 carries to lead Fruitport, while Flores had 62 yards rushing and four receptions for 34 yards. Cooper and Rico Jones each had sacks for the Trojans’ defense.

Steve Ready had 98 yards on 18 carries to pace the Lakers’ run game. They totaled 241 yards overall.  Keyser completed 6-of-10 passes for 61 yards, and also led the defense with nine tackles. 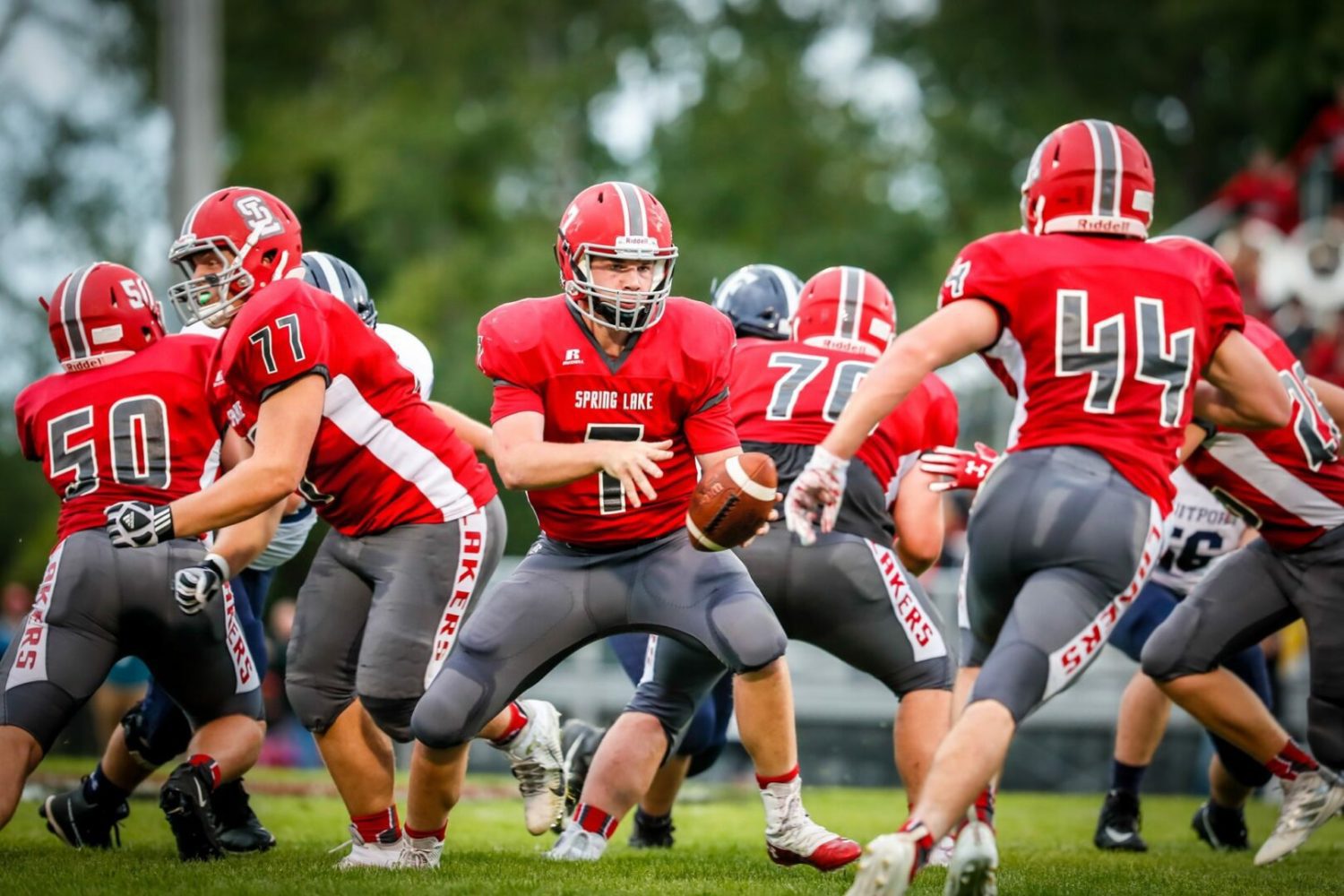 Spring Lake QB Zachary Keyser gets ready to hand the ball off to No. 44 Steve Ready. Photo/Tim Reilly 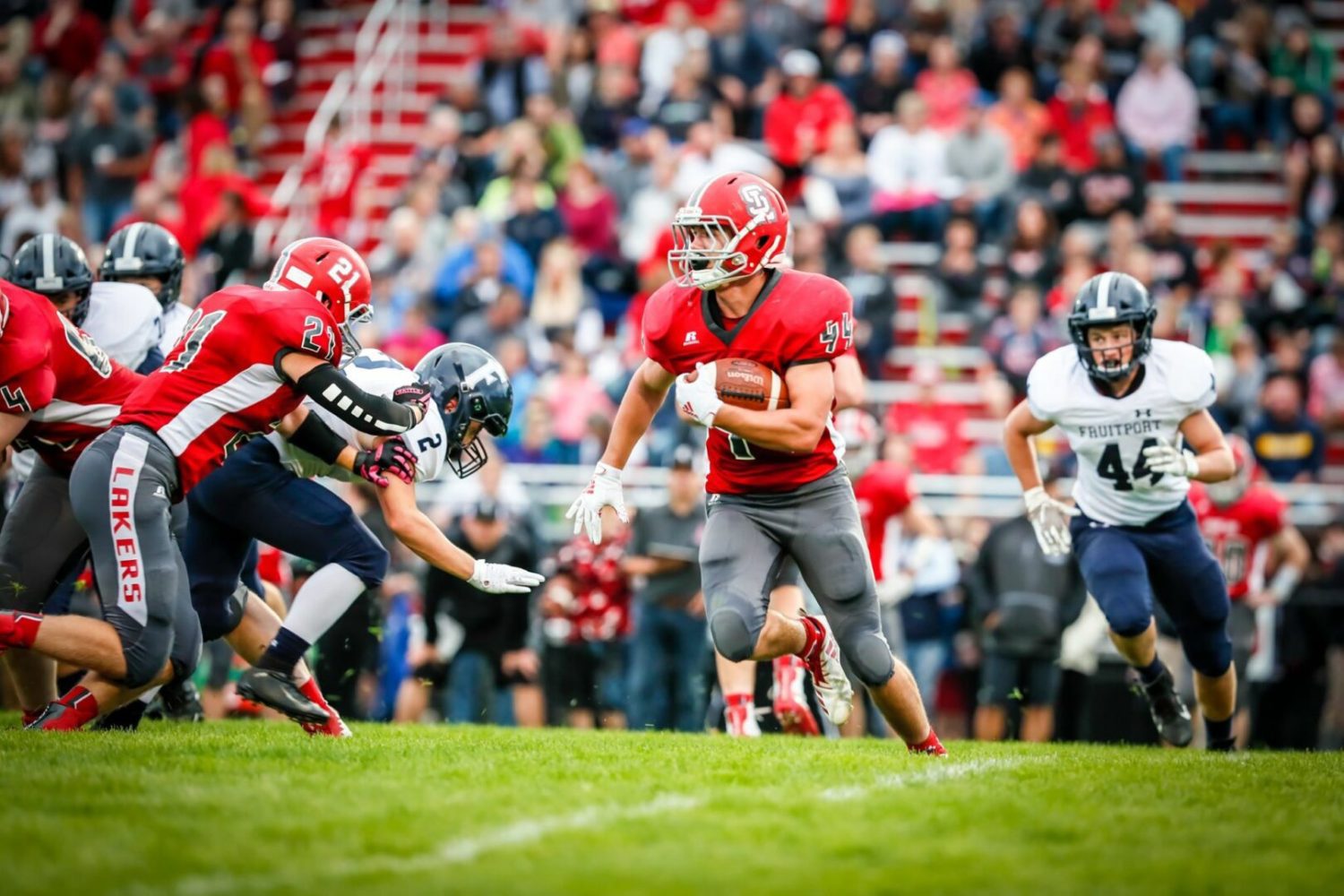 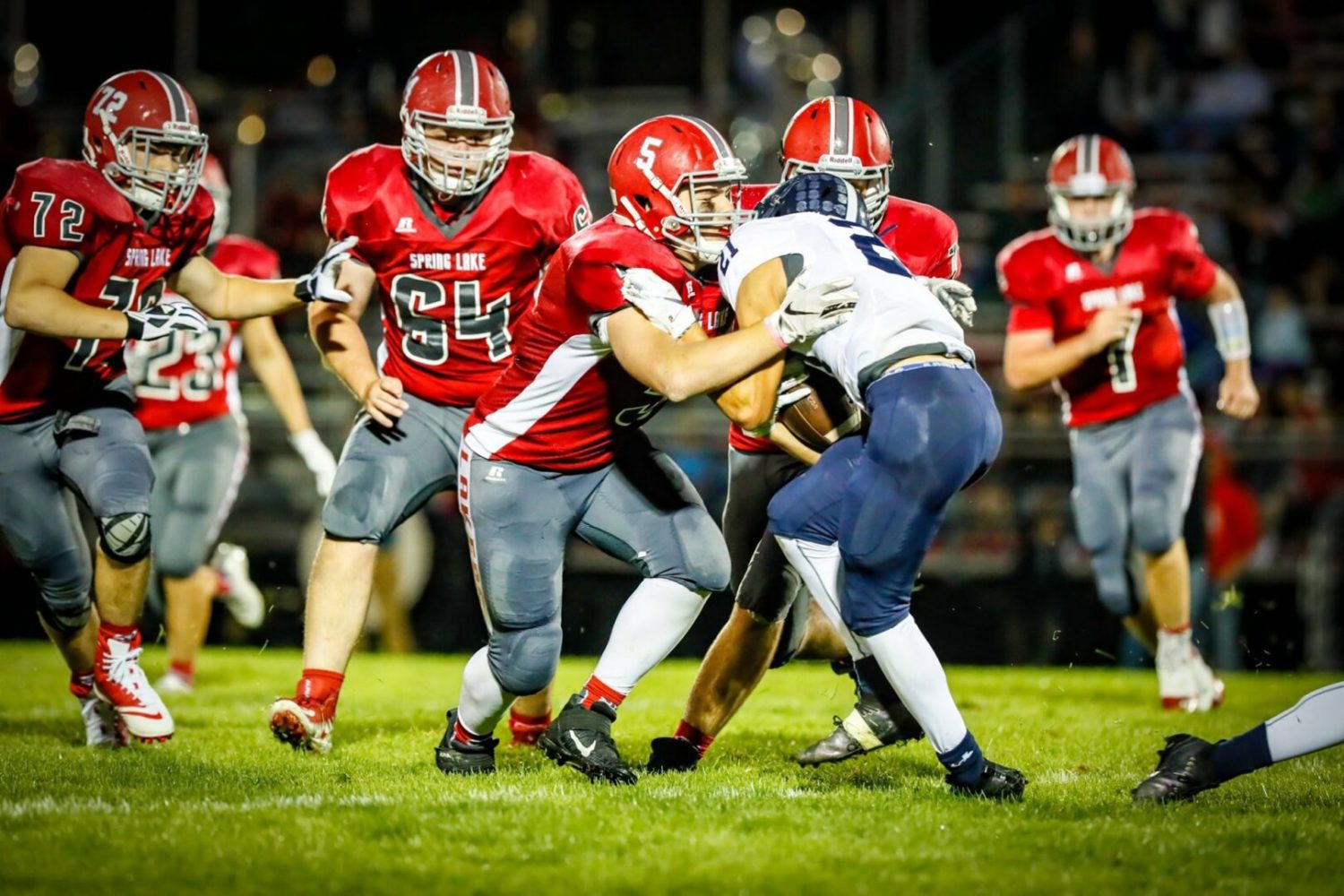 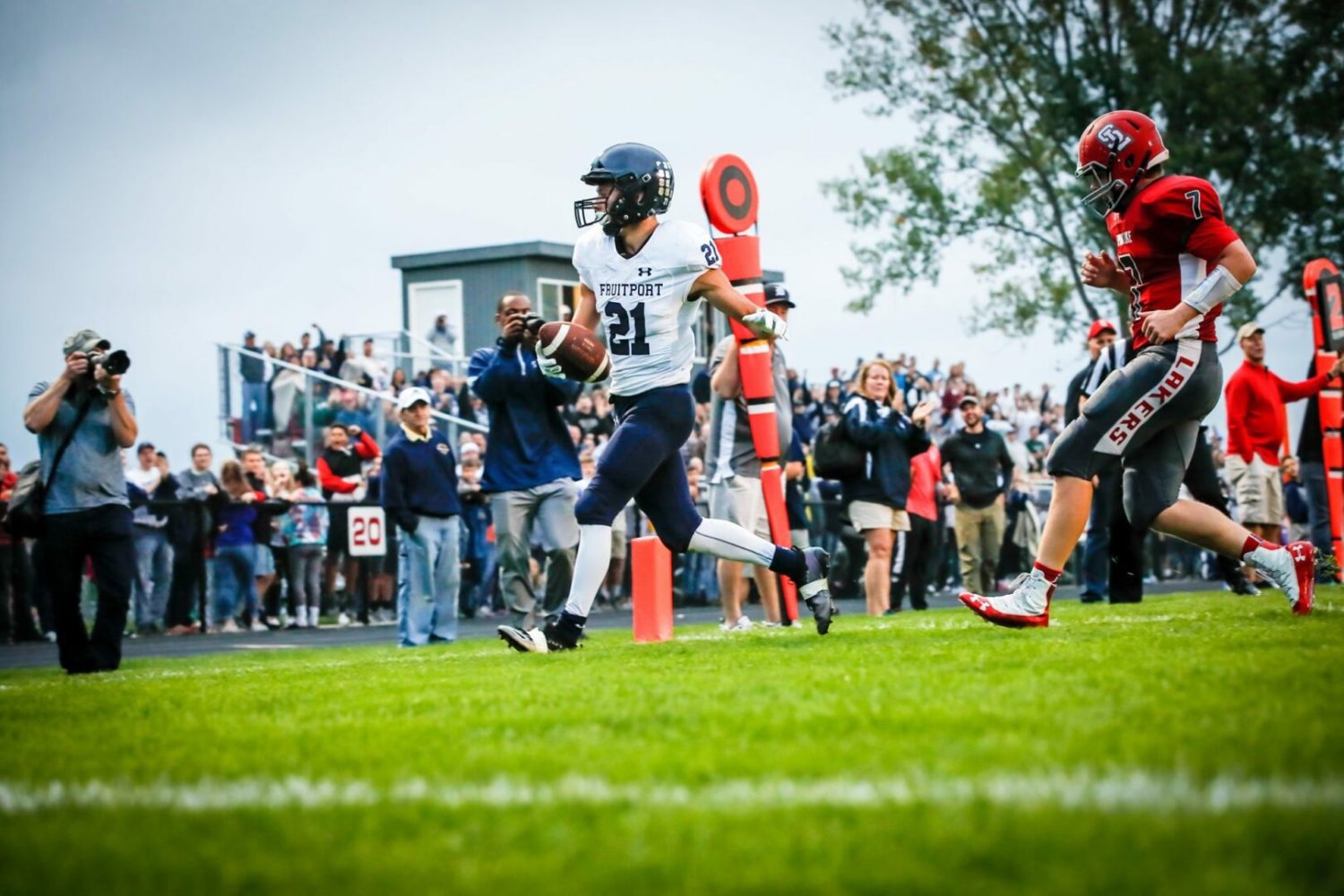