It’s been an interesting and surprising high school football season in the Muskegon area.

Teams that few expected to make a lot of noise are doing very well, and a few  that had playoff ambitions will have to win the rest of their

games to qualify for the postseason.

It’s not surprising to see traditional powerhouses Muskegon and Oakridge at 5-0, but who would’ve picked Orchard View to be unbeaten through five weeks? How about Ravenna entering Week 6 tied for the West Michigan Conference lead, and ahead of Montague, the defending conference champion and a state final team last year?

Then there are teams with talent, but have their backs against the wall. That includes Whitehall and Reeths-Puffer, who each have three losses on the season and face several roadblocks in their bids to make the playoffs.

LocalSportsJournal.com will be on hand to cover several of those these storylines on Friday night. Our Week 6 LSJ “Spotlight Games” are Ludington at Orchard View, Ravenna at Montague, Whitehall at North Muskegon and Muskegon at Jenison.

Check LocalSportsJournal.com Friday night for full coverage of these games and reports on all others in the area. 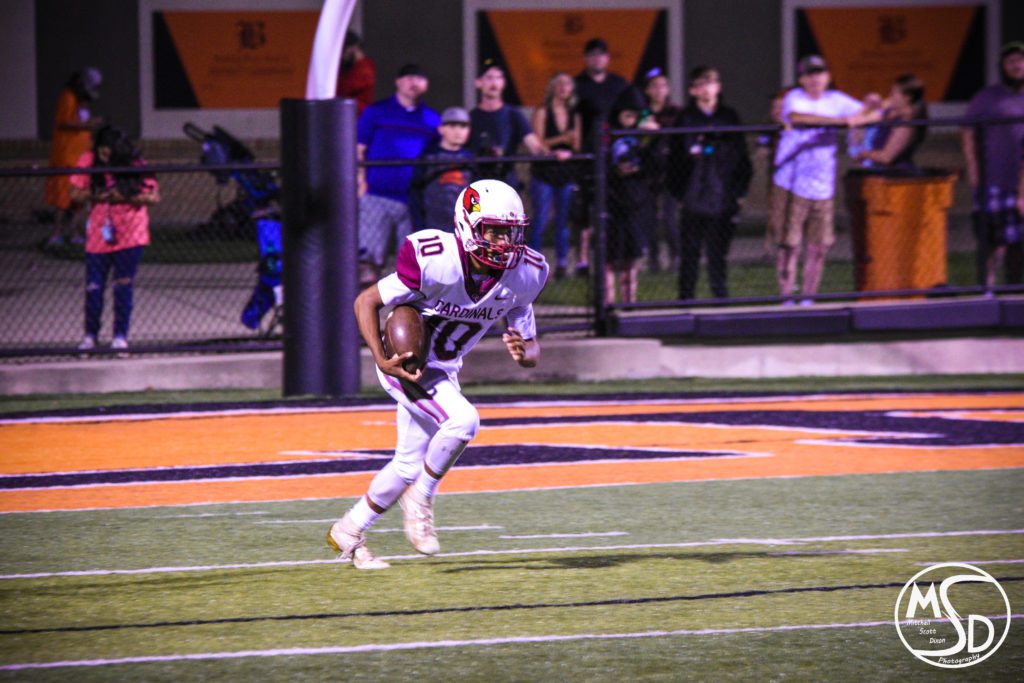 The sixth win won’t come easy against Ludington, which comes in at 4-1 and is trying to nail down its own playoff berth. A win would pull Ludington into a tie with OV atop the conference standings.

Orchard View comes in ranked No. 3 in the state in Division 4, while Ludington is just outside of the Top 10. The Cardinals average 37.2 points per game and allow 16.8, while the Orioles average 37.8 points and give up just 14.4.

Orchard View has done it’s damage on the ground, led by Brendan Hyatt, Edmari Mitchell and quarterback Owen Swanson. Mitchell led the balanced rushing attack with 87 yards in a 58-7 win over Manistee last week. Sophomore back Darius Williams got in on the fun with four touchdowns in that game, including a pair of kickoff return scores.

Ludington is coming off a convincing 33-0 win over Muskegon Heights in a game that ended at halftime due to weather. Quarterback Riley Calhoun starred in the shortened game, passing for 87 yards, rushing for 73 more and totaling three touchdowns. Drew Arce led Ludington with 54 receiving yards.

Orchard View leads the all-time series 37-12, although the teams have split the last 10 meetings,

The Bulldogs and Wildcats are both in unfamiliar territory in the West Michigan Conference race, at least compared to recent seasons. 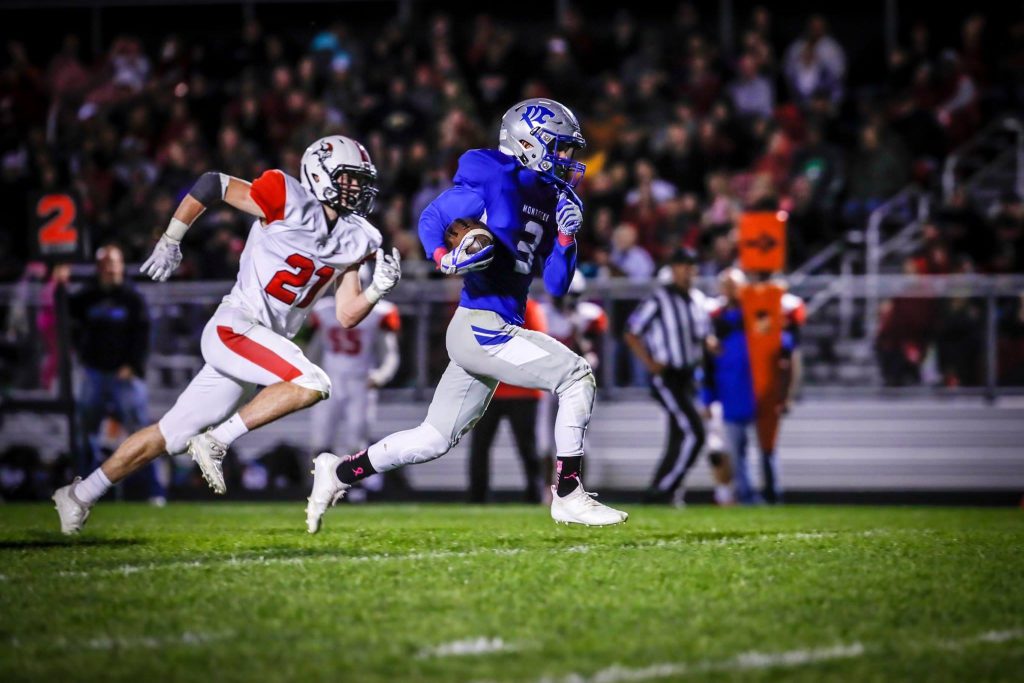 Ravenna sits atop the league standings with Oakridge, and controls its own destiny with four games to go. Montague, on the other hand, had its 17-game conference winning streak snapped by Oakridge last week, and isn’t on top of the league standings for the first time since 2016.

The Wildcats are ranked No. 4 in the state in Division 5, while Ravenna comes in at No. 9 in Division 6.

Montague is led by quarterback Drew Collins, who has thrown for 928 yards, ran for 284 and accounted for 17 total touchdowns. Johnny Monette leads the rushing attack with 363 yards and six scores, while Brennan Schwarz is the leading receiver with 364 yards and five touchdowns.

This is another West Michigan Conference battle with a lot on the line, but the stakes are slightly different for Whitehall and North Muskegon – keep winning or risk missing out on the playoffs. Neither team has much breathing room over the final four weeks of the season. 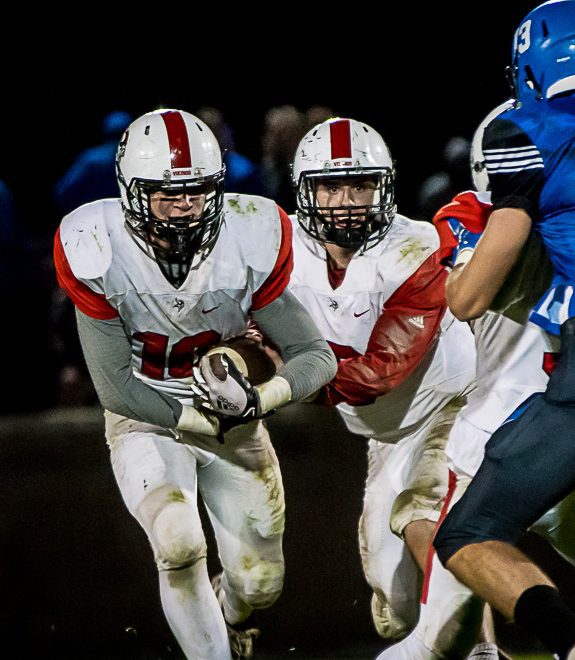 The Vikings will have to win out to reach the magic number of six wins for an automatic playoff berth. With North Muskegon, Montague (4-1) and Montrose (4-1) left on the schedule, that won’t be easy.

The Norse have a little more flexibility with three wins. But they will still have to win three of their remaining four to reach six wins, and after playing Whitehall on Friday, North Muskegon still has dates with undefeated Oakridge and Orchard View.

Whitehall comes in following a 40-0 win over Shelby that snapped a two-game losing streak. Kayleb Venema dominated on the ground, rushing for 214 yards and a pair of scores. Quarterback Brodie Fogus had 102 yards and three touchdowns in the win.

North Muskegon topped Hart 49-0 last week for a second straight shutout win. Stephan Smith led the offensive attack with 112 yards and three touchdowns on the ground. Collin Schotts rushed for 86 yards and a pair of scores.

The Vikings have dominated the rivalry of late, winning each of the last five meetings. Since 1950, North Muskegon leads the series 27-24.

The Big Reds opened their O-K Black conference season with two straight shutouts, and the Wildcats might be pressed to break that streak.

Muskegon is ranked No. 1 in the state in Division 3, and would likely be on top of a poll of all teams. It’s hard to compare Muskegon with other teams after its early-season dominance, so how about comparing the Big Reds to last year’s team, which advanced to the Division 3 state finals?

Quarterback Cameron Martinez has grabbed much of the attention this year, but Tommy Watts provided the firepower last week. The senior running back ran for 185 yards and four touchdowns in a 59-0 win over Fruitport.

Jenison comes in with a 2-0 record in the conference.