JENISON — There wasn’t a typo in the final statistics for the Muskegon football team.

It’s just the evolution of the Big Reds offense with senior Cameron Martinez at the controls.

The Big Reds’ All-State senior quarterback, known for his tremendous talents running the ball, has been given more and more opportunities to show what he can do through the air.

It came full circle with his performance on Friday at Jenison High School, when Martinez actually totaled more passing yardage than rushing in the Big Reds’ commanding 49-10 victory over the Wildcats in an O-K Black Conference matchup.

Martinez did a tremendous job spreading job the ball around to the Big Reds’ collection of playmakers, finishing 10-of-15 for 205 yards. He wasn’t a slouch running the ball, either, scoring four touchdowns on the ground and totaling 109 yards on 20 carries.

“It’s going to help the kid in big games down the road,” said Muskegon coach Shane Fairfield, whose squad qualified for a berth in the Division 3 playoffs with its sixth victory. They now stand at 6-0 overall and 3-0 in O-K Black Conference play. Jenison falls to 2-4 overall and 2-1 in the league. 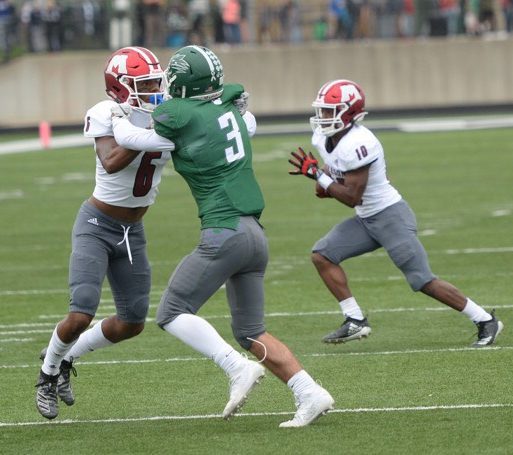 “Everyone wants to see him get 400 yards,” Fairfield added. “But that’s not the way we’re built. We’re going to continue (with the pass game). We can’t get into a game like the state championship or (East Grand Rapids) where everyone is keying on No. 13.  We’ve got kids who are stepping up and proving it to themselves and to others that we’re not just a one-man team.”

Muskegon had a 7-0 lead after one quarter on a 10-yard run by Martinez, but then other playmakers soon began to make their mark.

Senior Tommy Watts’ 39-run run helped set up his own short touchdown run early in the second quarter to build Muskegon’s lead to 14-0.

After a long Jenison drive and 36-yard field goal, the Big Reds dealt a knee-buckling blow to the Wildcats, needing just a pair of long pass plays – 46 yards to Quenten Reynolds and 26 yards to Amari Crowley – to set up Martinez’ 1-yard touchdown run.

Muskegon took a 20-3 lead into the half.

“We have players on the outside that can catch the ball and get some yards,” said Reynolds, who totaled four catches for 115 yards. “Every game we might not get a good ball, but we’re going to get yards when we get our hands on it. I’m just trying to get yardage any way I can to help our team.” 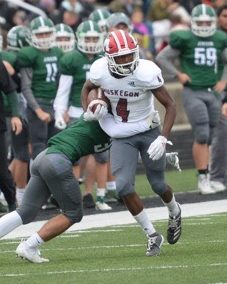 Crowley and Japrie Henderson also had their bright moments in the passing game, totaling 38 and 39 yards, respectively.

Muskegon put the game away in a lengthy third quarter, when Martinez added touchdown runs of 3 and 4 yards, and his backup, Crowley, had an electrifying 40-yard sprint down the sidelines to make it a 42-10 contest.

Muskegon limited Jenison to 238 total yards, and excelled in shutting down the Wildcats’ desire to flourish on sweeps and the option. Muskegon also received outstanding play from safeties Tyreese Oakes and Julius Sims. Oakes had a soaring interception in the third quarter, and the duo helped limit  the Wildcats to zero completions in the second half.

After the win, the news of another playoff berth was met with a business-as-usual approach by the Big Reds.

“It means it gives us seniors an extra week to do what we gotta do,” Reynolds said. “And that’s to get back to Ford Field.” 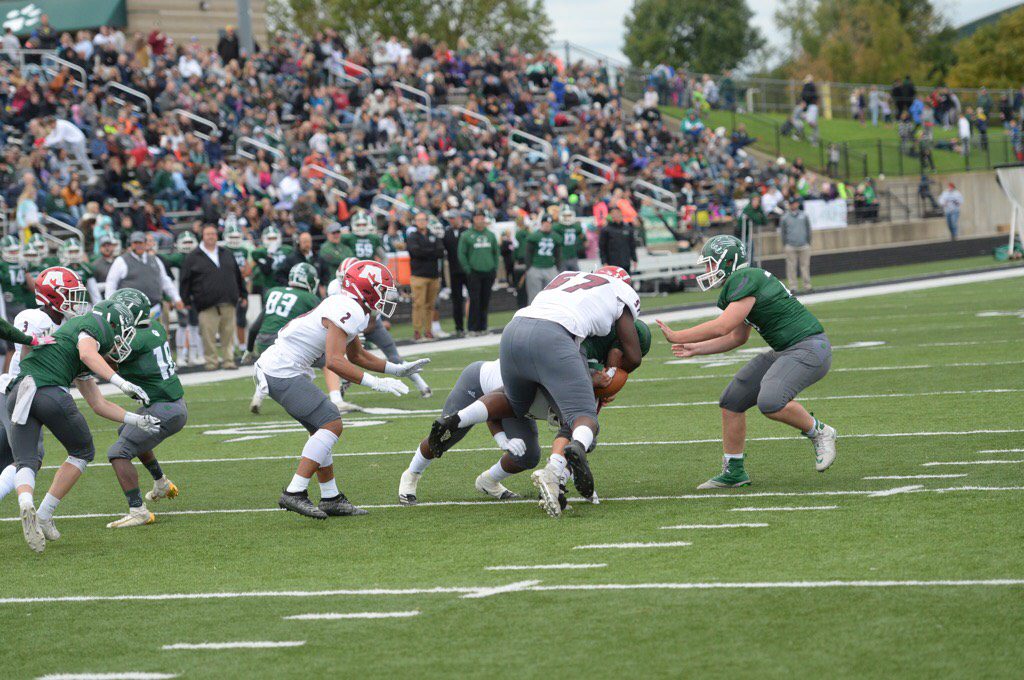 No. 57 Demetrius Walker makes a tackle for Muskegon. Photo/Craig Smith 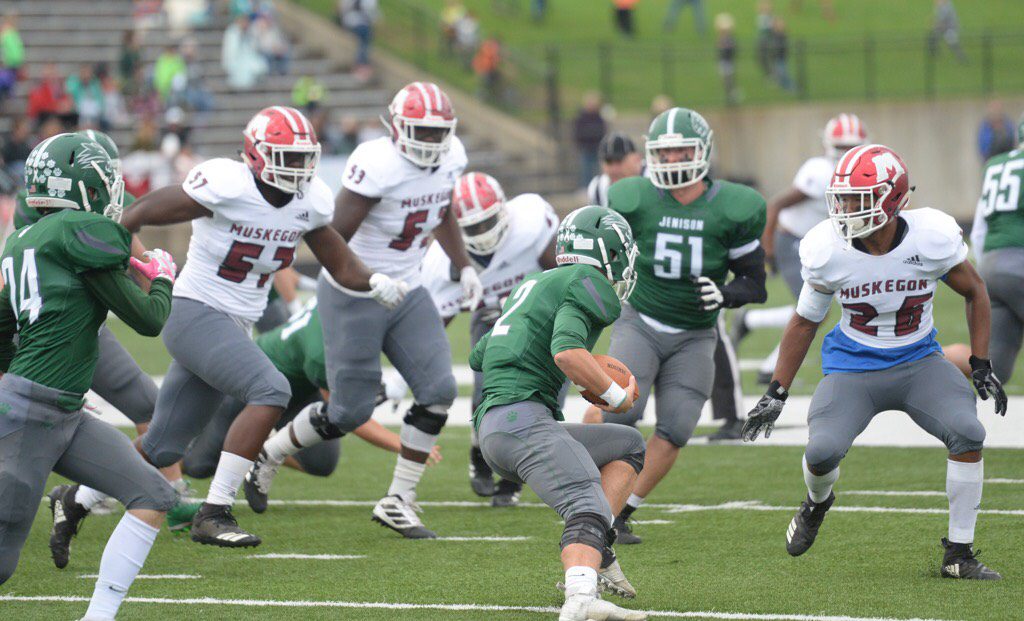 Muskegon defenders No. 26 Desjuan Lindsay, No. 57 Demetrius Walker and No. 53 Billie Roberts pin in the the Jenison rush. Photo/Craig Smith 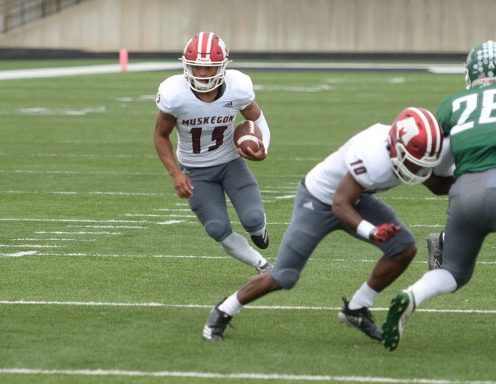 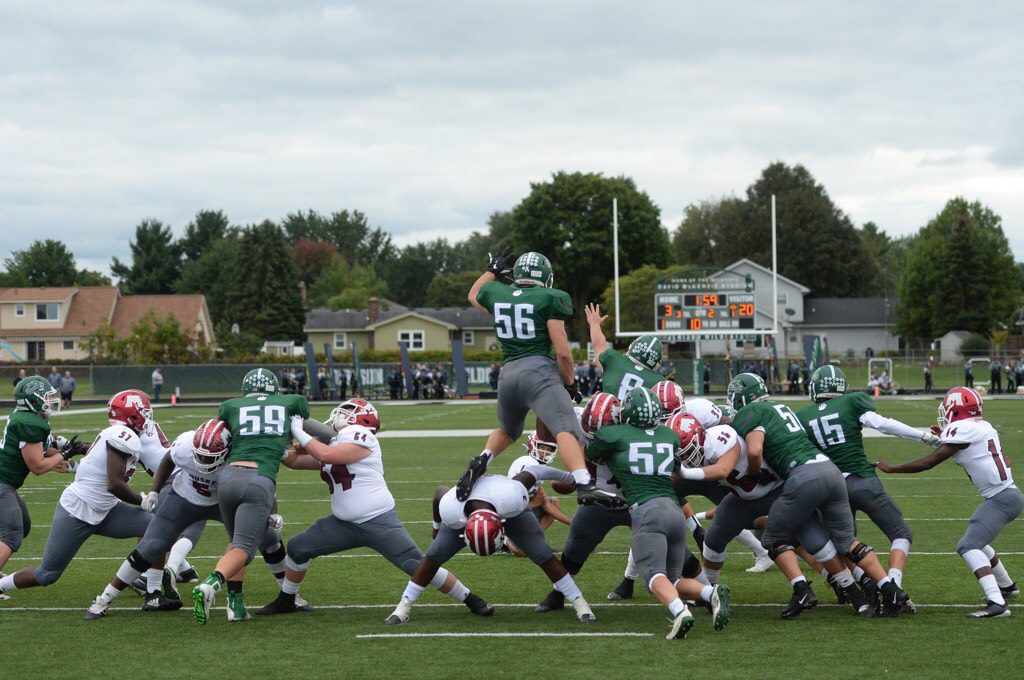 Saturday wrestling roundup: Montague, Hart and Reeths-Puffer all have great days on the mat