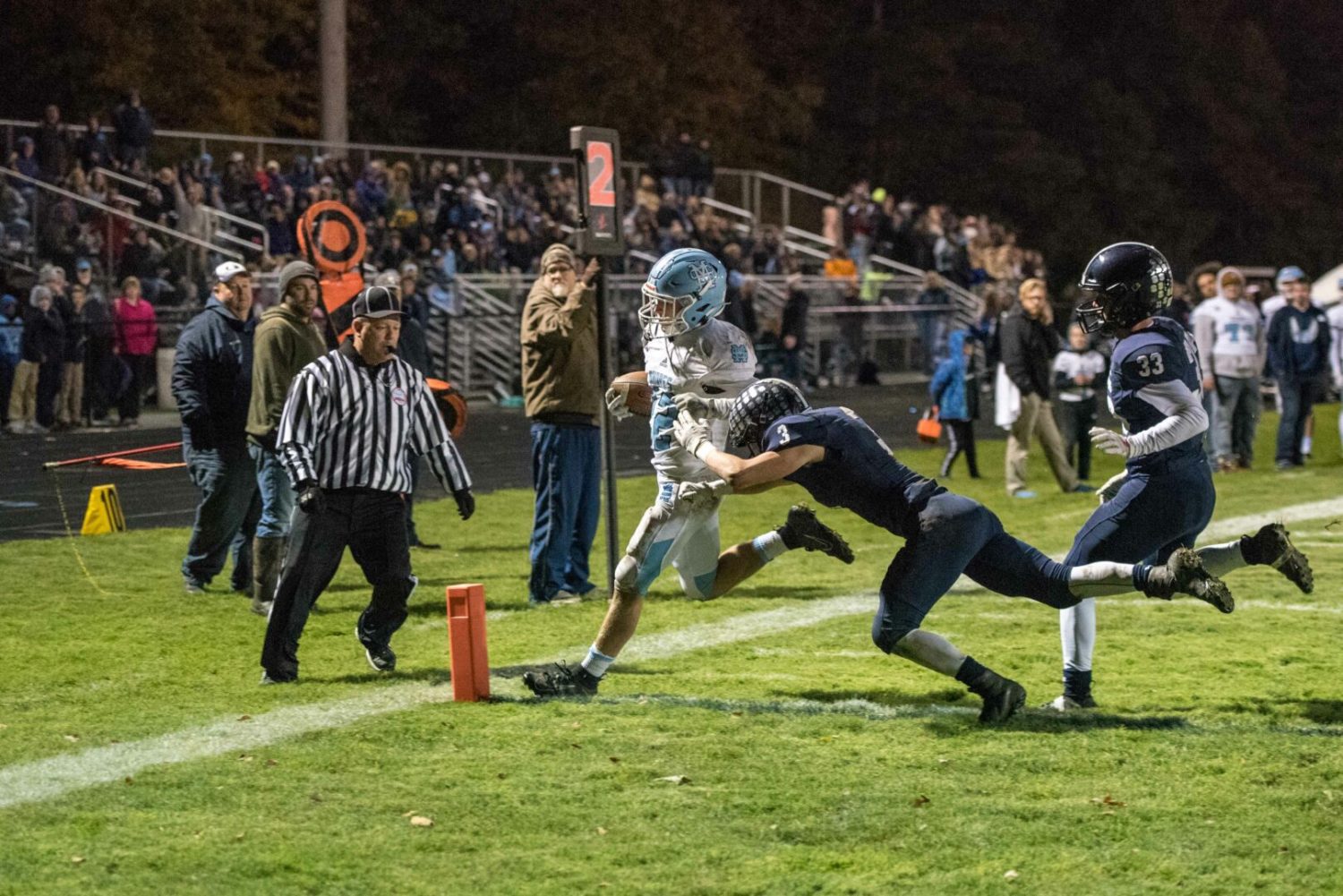 FRUITPORT – Whether it was Fruitport being an improved team, or a bit of a hangover from last week’s ugly loss to Muskegon, Mona Shores needed a strong

second half to defeat the Trojans 42-20 on Friday in O-K Black Conference action.

After leading 14-7 at halftime, the Sailors outscored the Trojans 28-13 in the second half and finished the regular season with a 7-2 overall record and a 5-1 conference mark.

“We knew Fruitport would give us everything they had,” said Sailor head coach Matt Koziak after the victory. “They were fighting for a playoff spot and they gave us their all. I was really proud of how we responded in the second half. We had to come out and make plays and we did.”

After the first quarter, Mona Shores held a 14-7 lead due to two touchdown passes from senior quarterback Caden Broersma. He threw a 35-yard TD strike to Brady Rose and a 19-yard touchdown pass to Kamden Briggs. 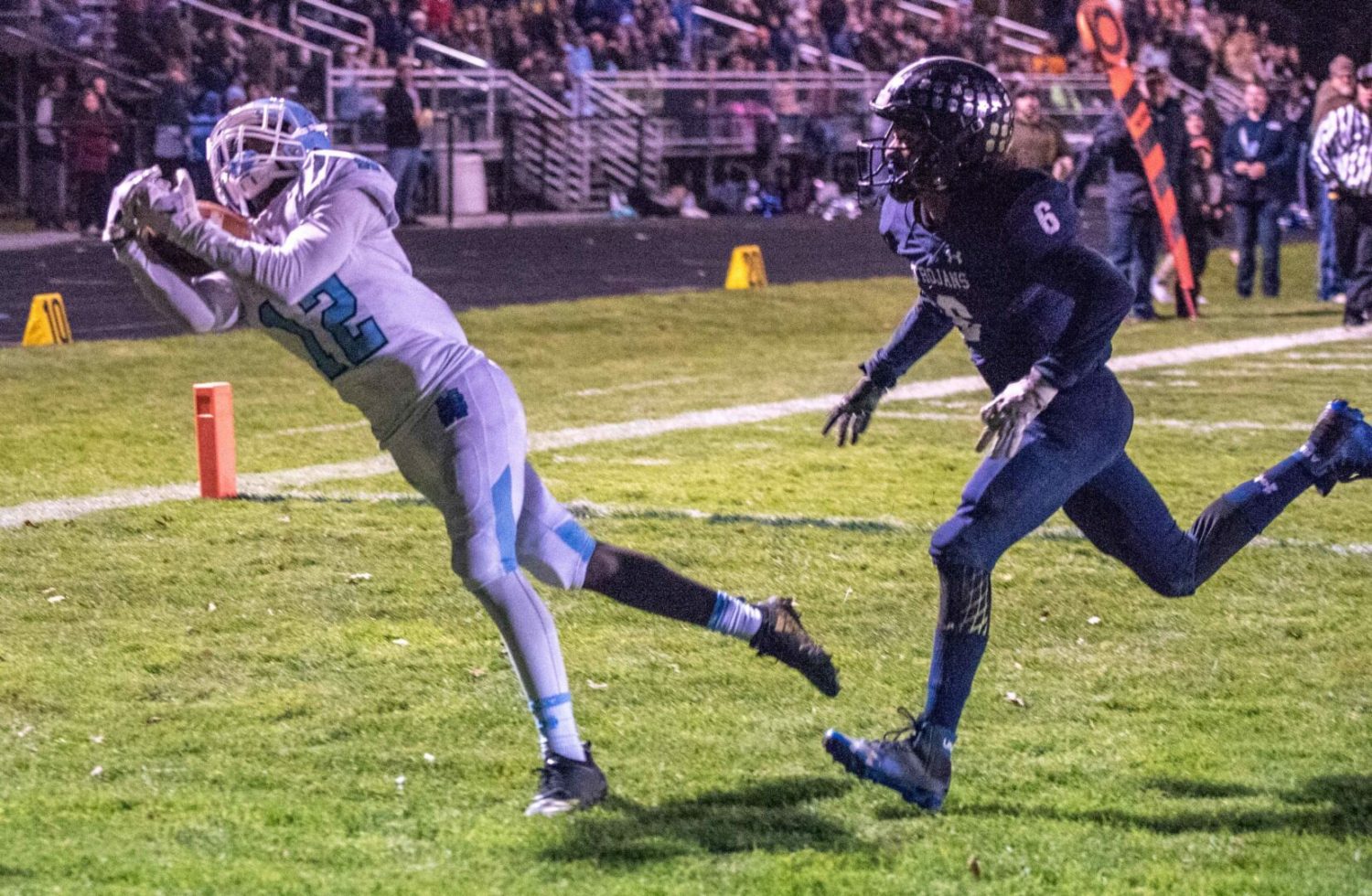 Kamden Briggs hauls in the fade pass from Broersma for a Sailor touchdown. Photo/Eric Sturr

The two teams were scoreless in the second quarter.

In the third quarter, Mona Shores got touchdowns on a Rose five-yard run and an Andre Burks 74-yard run.

On the final play of the third quarter, Fruitport’s Zech Richardson punched in a four-yard touchdown run to cut the Trojan deficit to 28-14.

In the fourth quarter, Kolbe Trovinger broke loose for a 40-yard run with 10:55 left to extend the Sailor lead to 35-14.

The final Sailor score came from Trovinger on a one-yard run, making the score 42-14.

Tyler Zimmerman had the final Fruitport pointsed of the night when he returned a fumble 33-yards for a touchdown.

Burks led all rushers on the night with 185 yards and one touchdown on 16 carries while Broersma finished 11-for-18 passing for 115 yards and two scores.

“I just played my game,” said Burks about his performance. “I want to shout out my offensive line for blocking so good. They made some great holes. We were really ready to come back out after last week. We were pissed to lose that big.”

Fruitport was led by Zimmerman who threw for 81 yards on 5-of-22 passing while Cooper was 2-for-2 for 51 yards.

The Trojans finished the season with a record of 4-5, while Mona Shores will wait to find out the identify of its first playoff opponent on Sunday night. 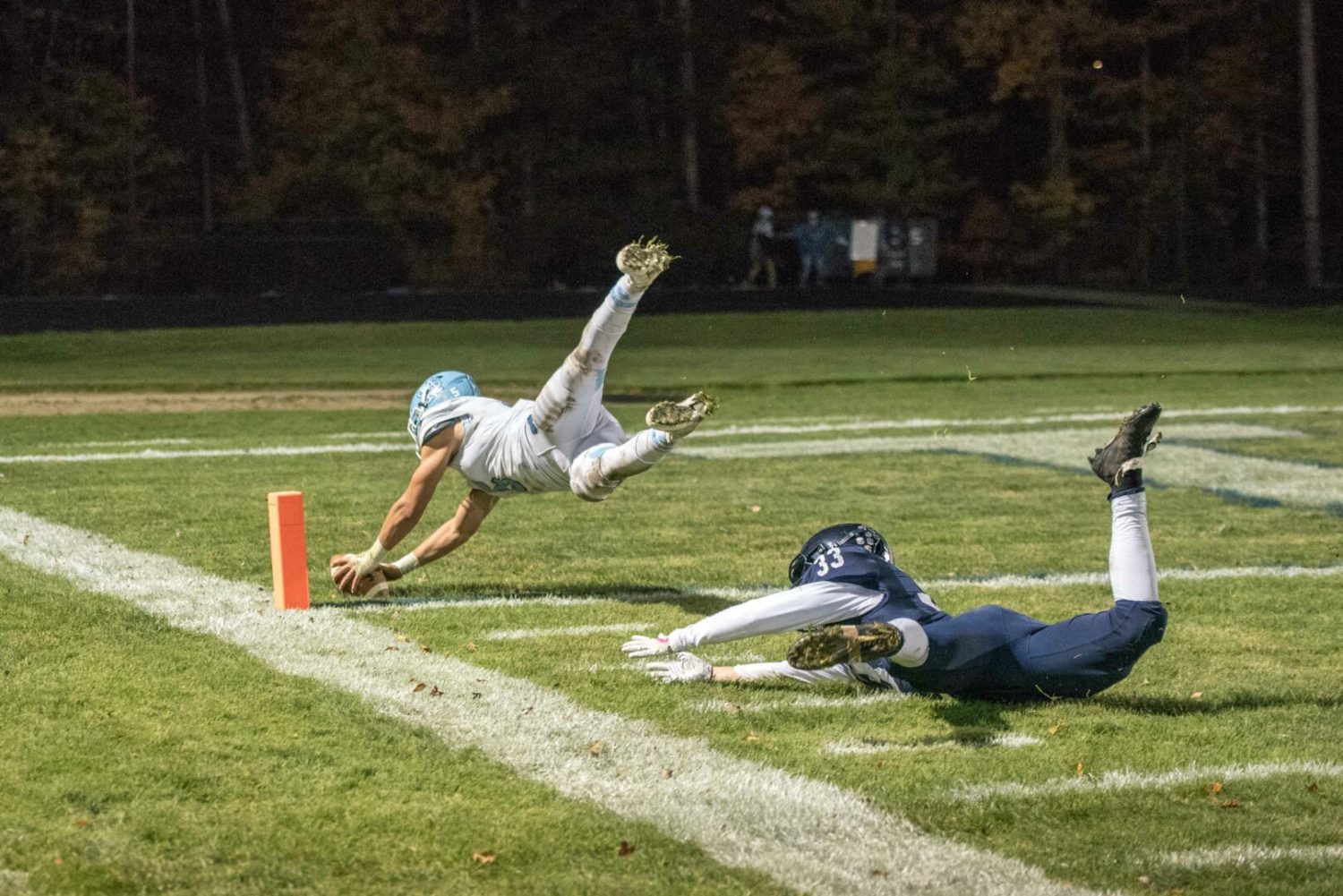 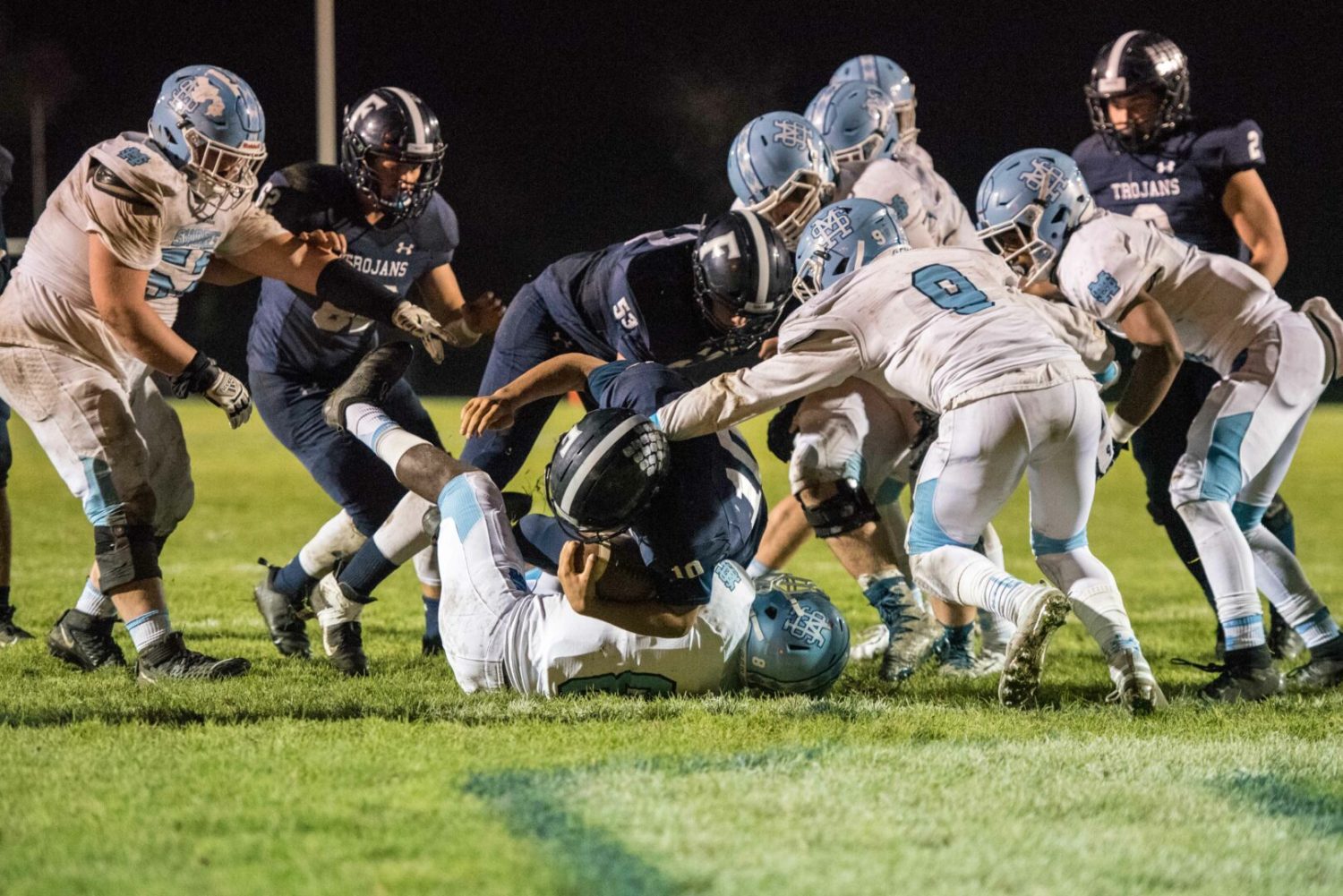 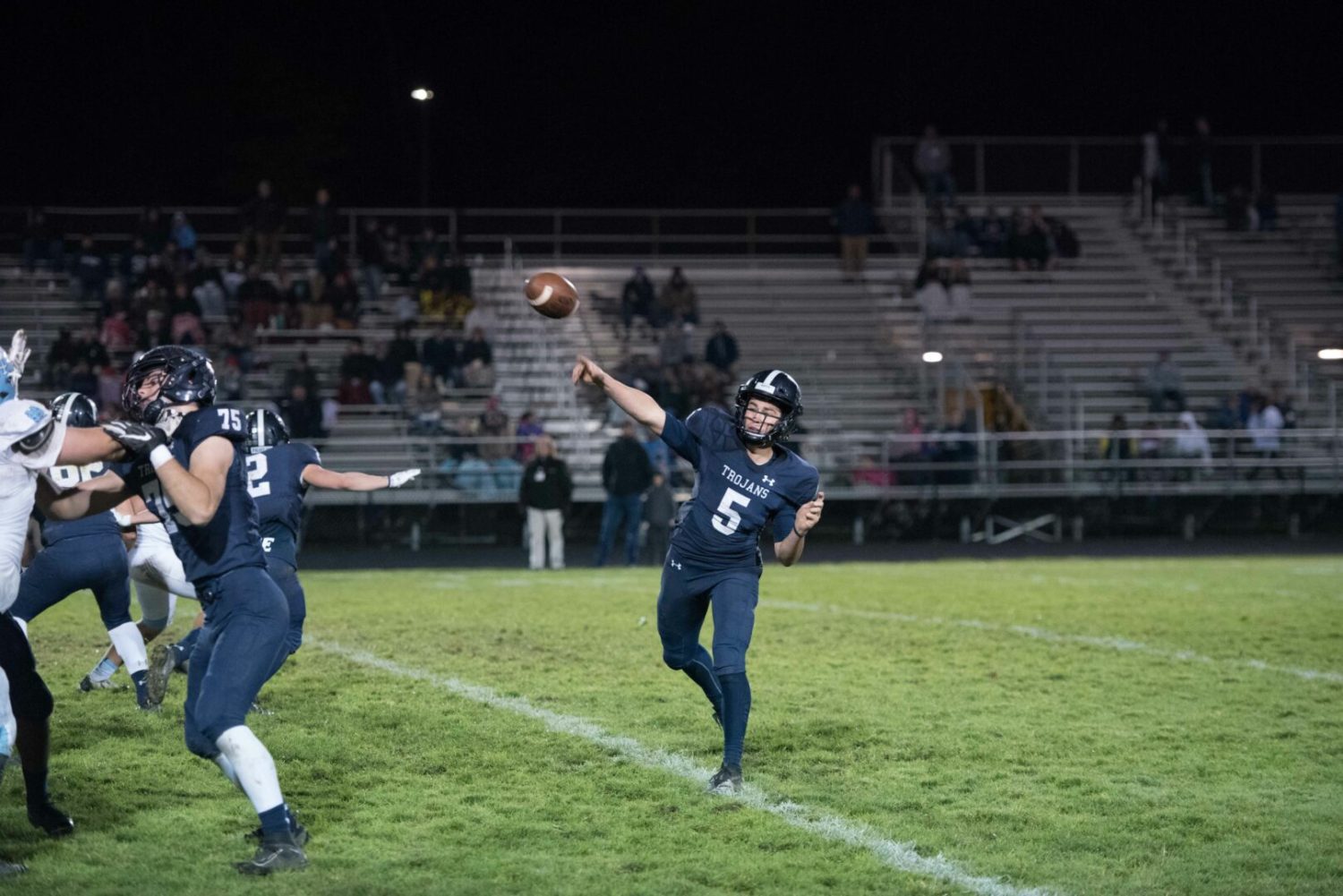 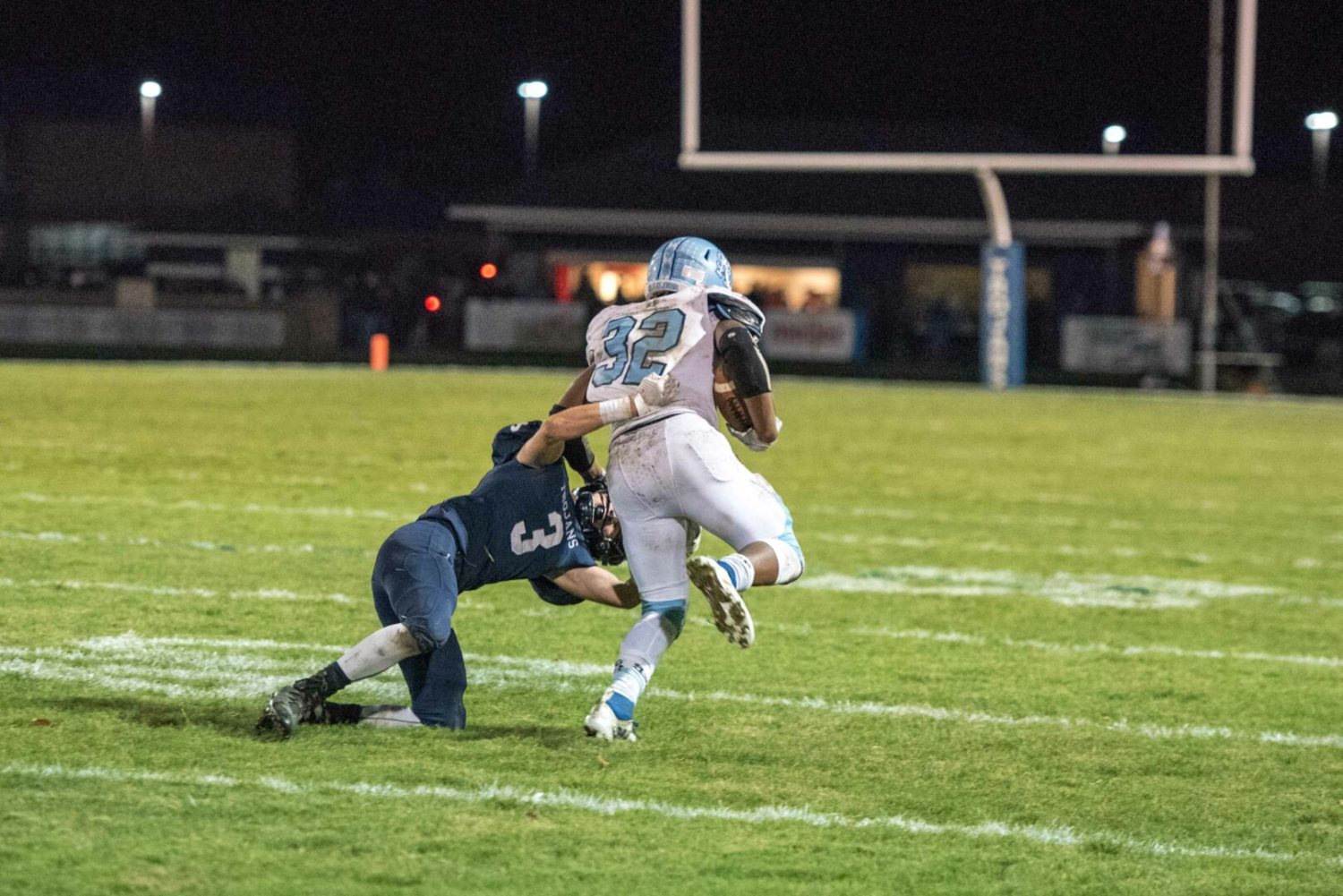 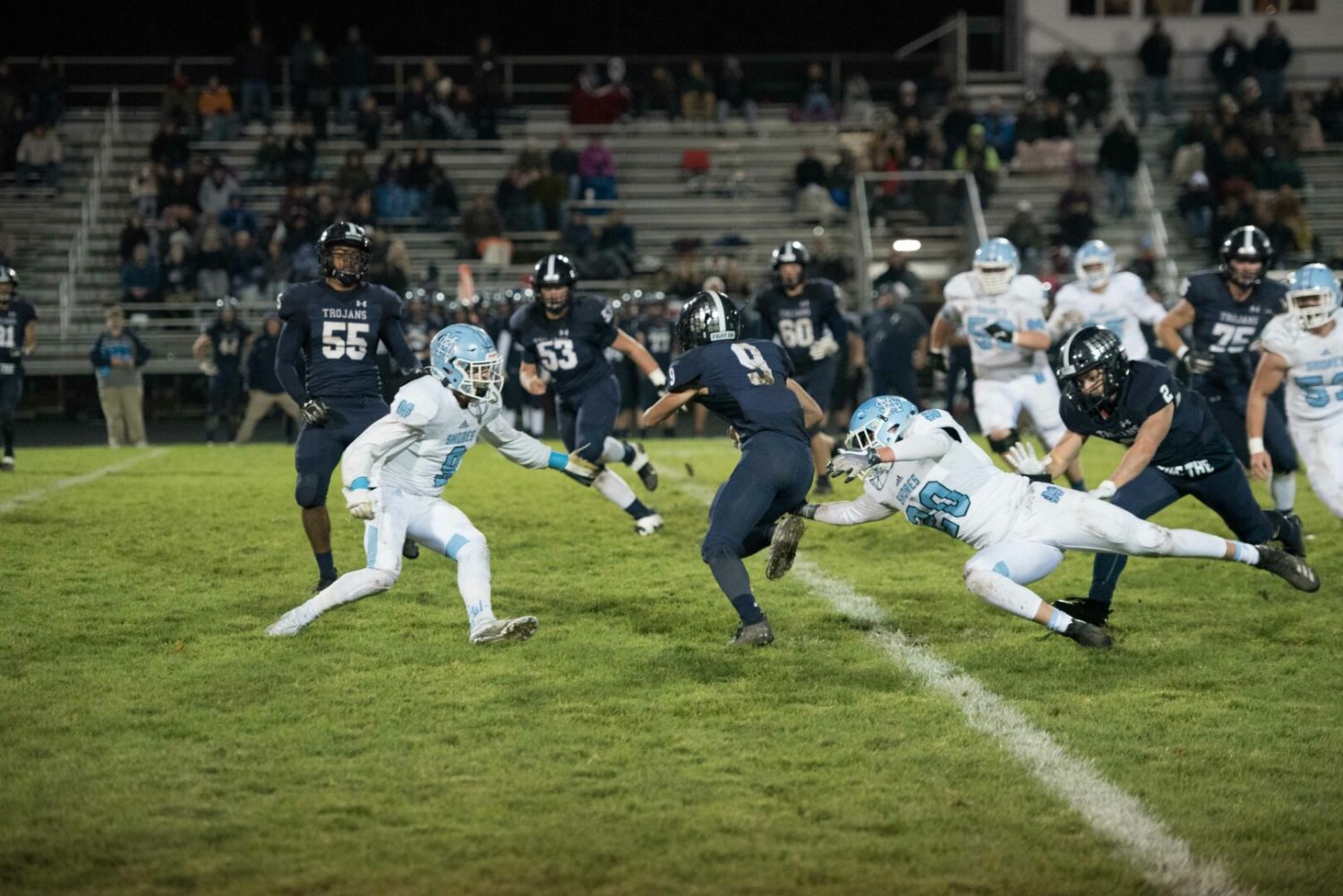 Fruitport’s Camden Farrell slips by would-be tacklers and turns up field for a Trojan first down. (Photo/Eric Sturr)

Brady Rose takes a pitch out wide and scampers in for a Sailor touchdown. (Photo/Eric Sturr) 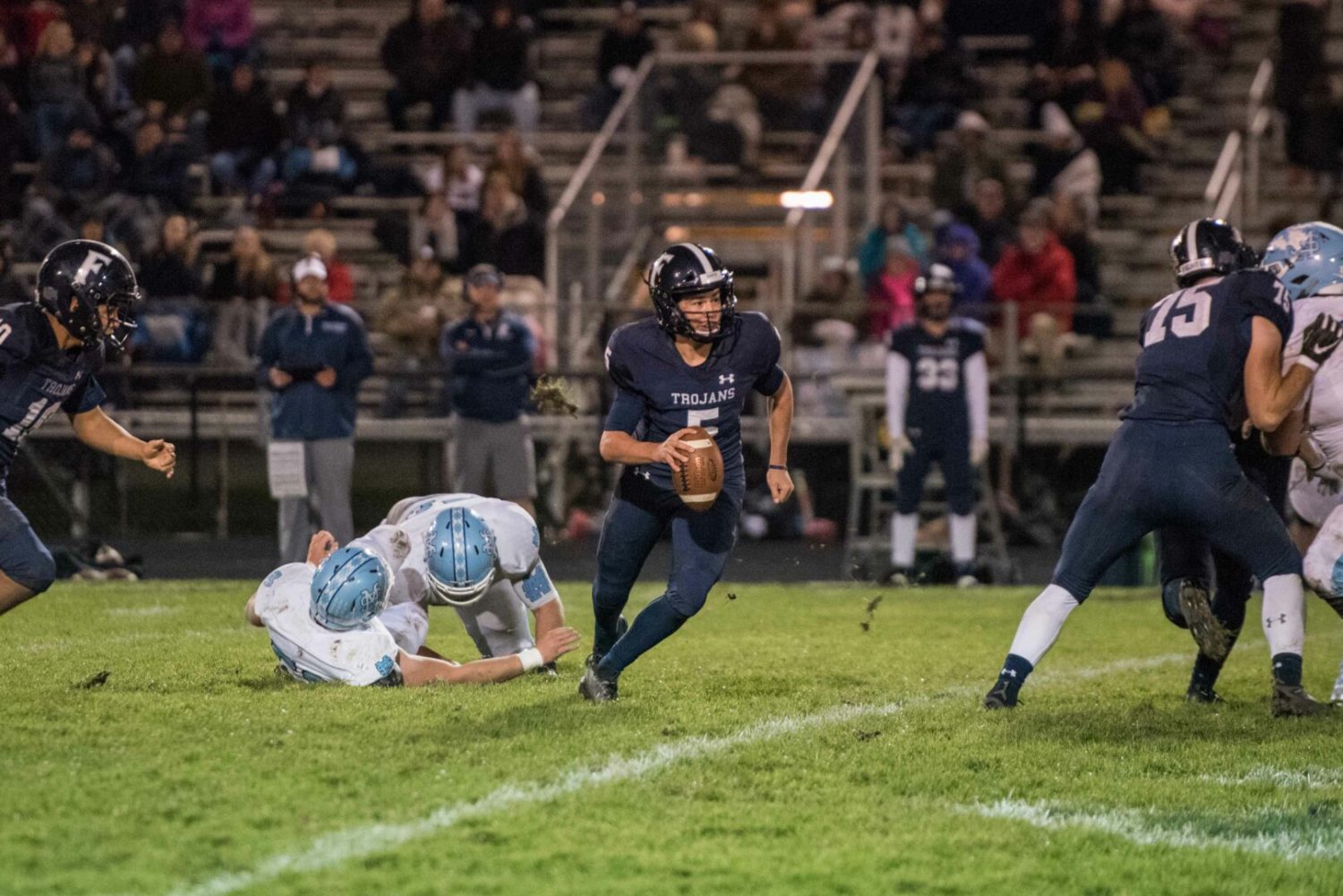 Fruitport’s Tyler Zimmerman escapes pressure and runs for the first down. (Photo/Eric Sturr) 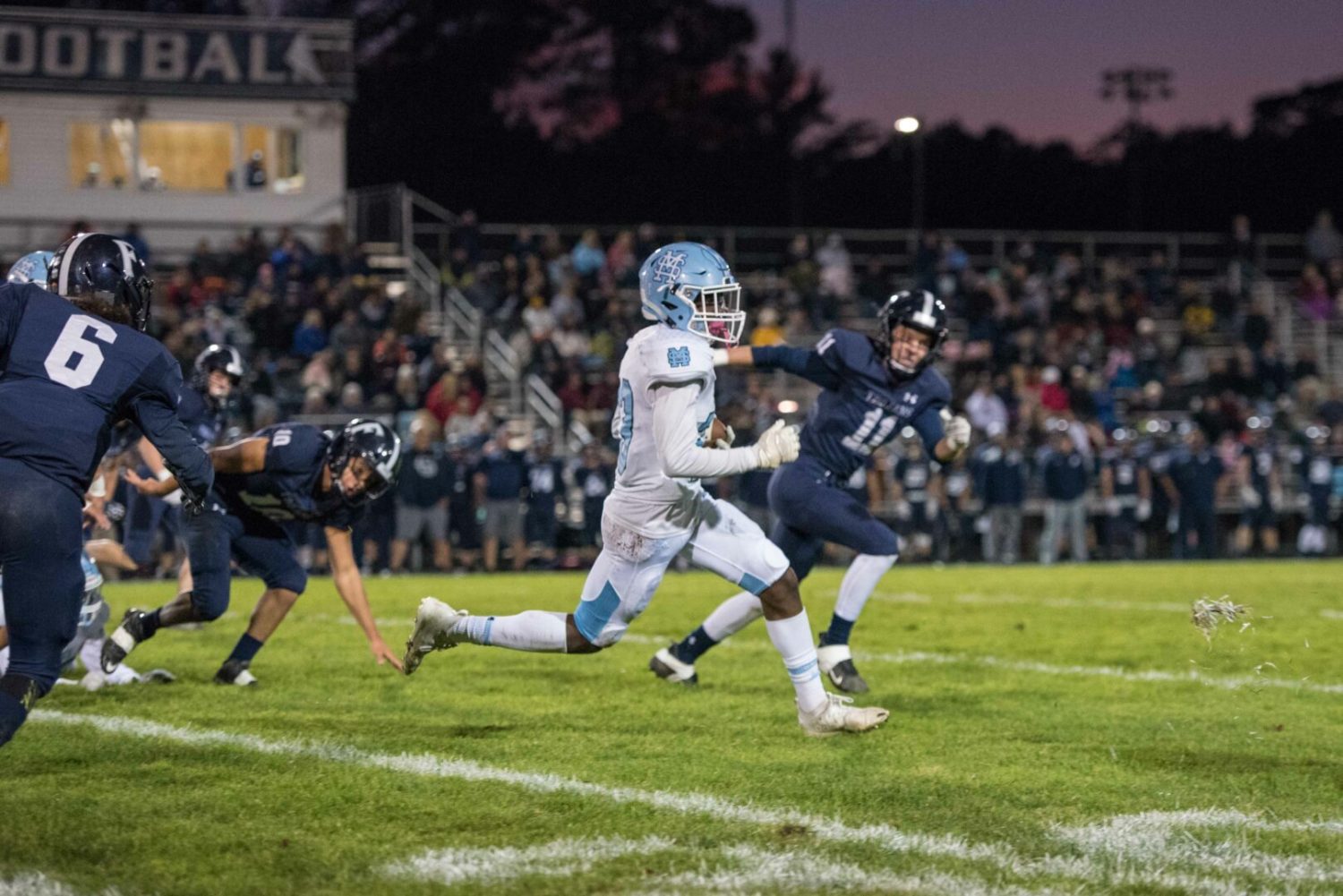 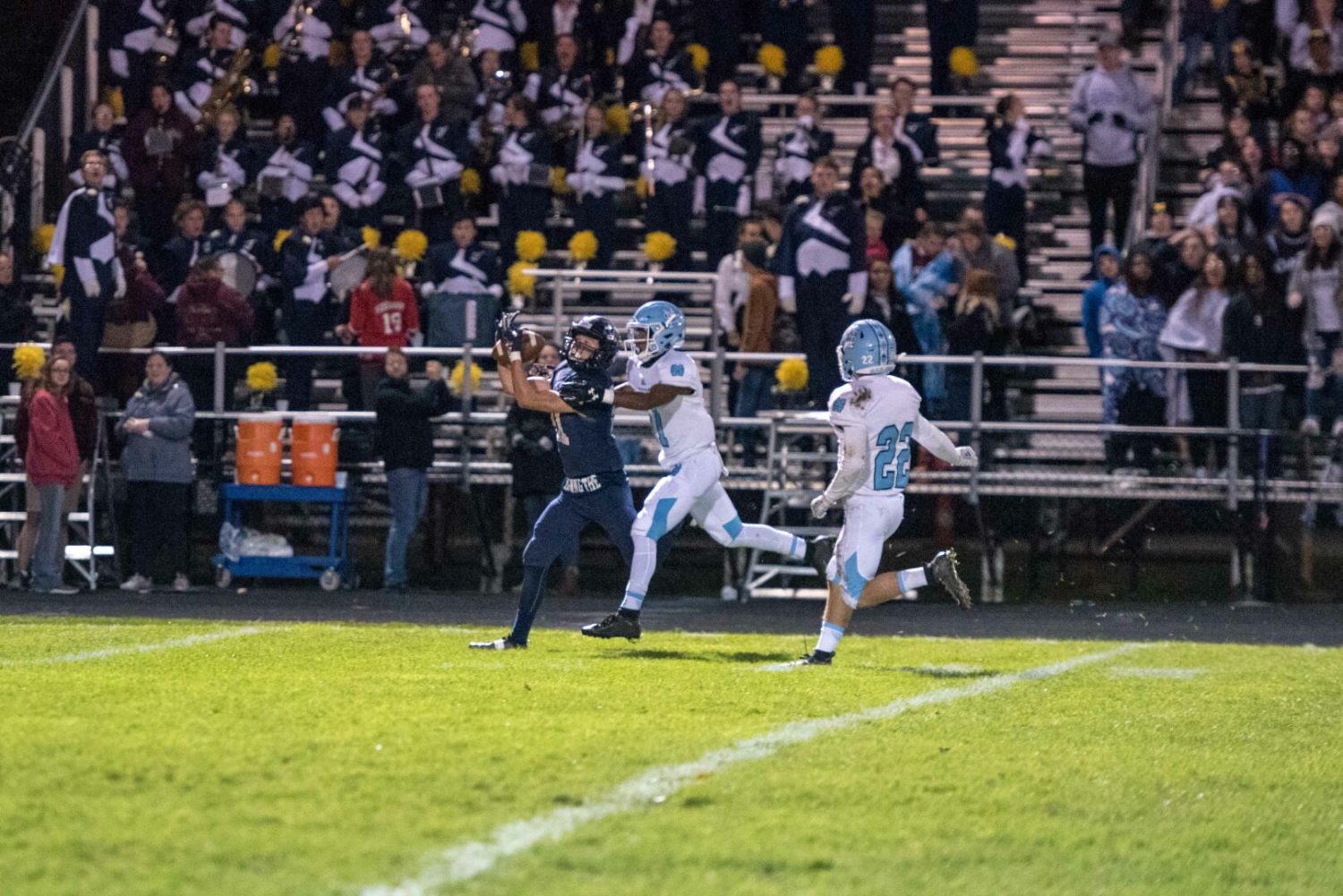 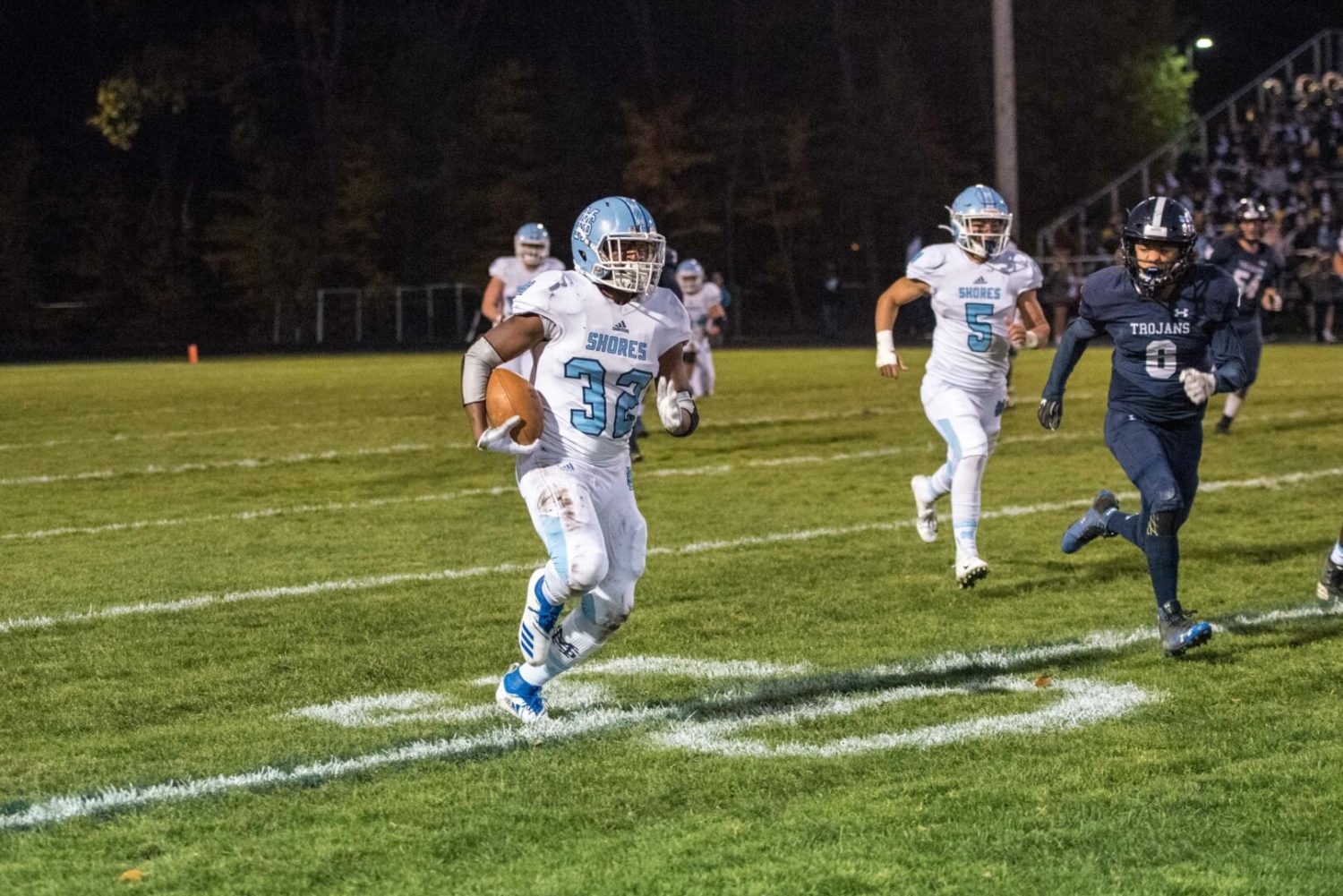 Andre Burks piles up yardage for the Sailors. (Photo/Eric Sturr)